These are all the free outdoor movies in Toronto this summer

Free outdoor movies in Toronto for 2019 are all about a shared movie-going experience that combines the fun of the theatre with the closest thing to great outdoors you'll get inside the city.

Many outdoor film series are back this year, including the Outdoor Picture Show which is heading to Bell Manor Park for the first time. But sadly, after a successful eight-year run, Sail-In Cinema has called it quits.

Here's a roundup of free outdoor movies screening in Toronto this summer.

A season of free films has already begun at Union Station's big summer market with a mix of new and old films shown each Wednesday among the tons of food and drinks from the station's many resident and visiting vendors.

Kicking things off for the season is the Toronto Outdoor Picture Show's opening weekend at Fort York, with two films that introduce this year's theme of 'dynamic duos' screened alongside snacks and merch for purchase.

Bellwoods is always the place to be in the summer, and its annual movie nights are just as popular. This year includes three screenings, one each month from June to August while Cycle Toronto will be offering bike valet service on site. 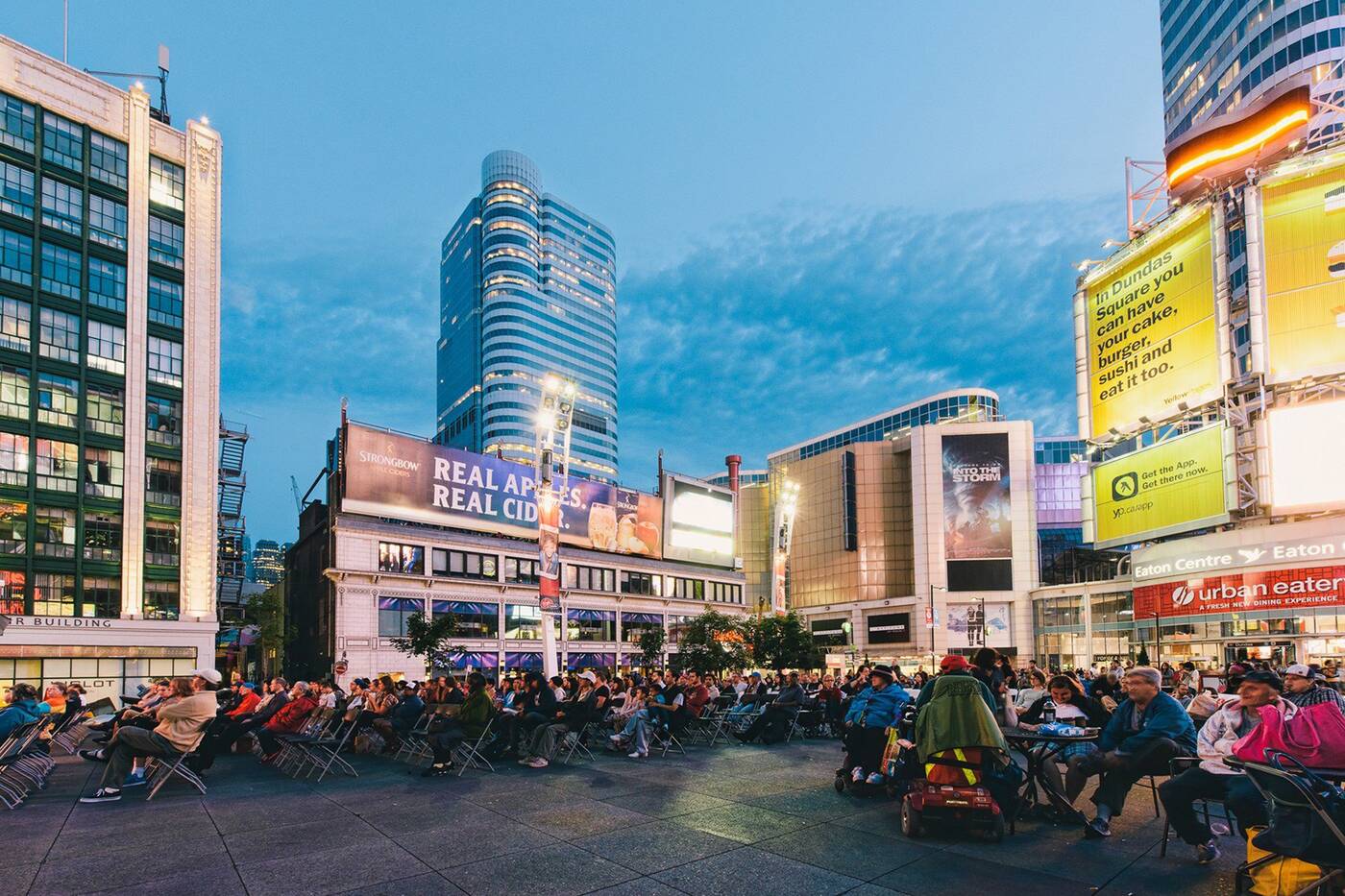 The busiest corner in the city might not be where you would expect to enjoy a movie, but City Cinema makes it work. Photo courtesy of Yonge-Dundas Square.

Liberty Village is ready for a great season of fun movies with three screenings once a month from June to August. All films are family-friendly and include some John Hughes 80s vibes, superhero action and the new Mary Poppins.

This hugly popular neighbourhood favourite screens one Saturday a month from June to September. Movie-goers can drop by early for a pizza dinner baked on site.

There's nothing like catching a flick in the middle of the hustle and bustle and Yonge-Dundas Square is once again hosting its free outdoor film series. This year is set to pay homage to the stars of Second City and includes pre-show comedy performance.

Two screenings in two spots are happening in the historic St. Lawrence Market area this summer where patrons can soak up the beauty of the area while catching a free flick, either outside of St. James Cathedral or in Parliament Square Park.

The city's seminal outdoor movie film festival is back with nine screenings every Sunday throughout the summer. Like the rest of the TOPS screenings, each one is carefully curated and paired with a Canadian-made short shown before the feature.

Movie Nights in the Park

Taking place at Kew Gardens in The Beaches, this annual outdoor movie series spans every Wednesday in July and August. Programming includes a mix of new and old family-friendly films and free popcorn. 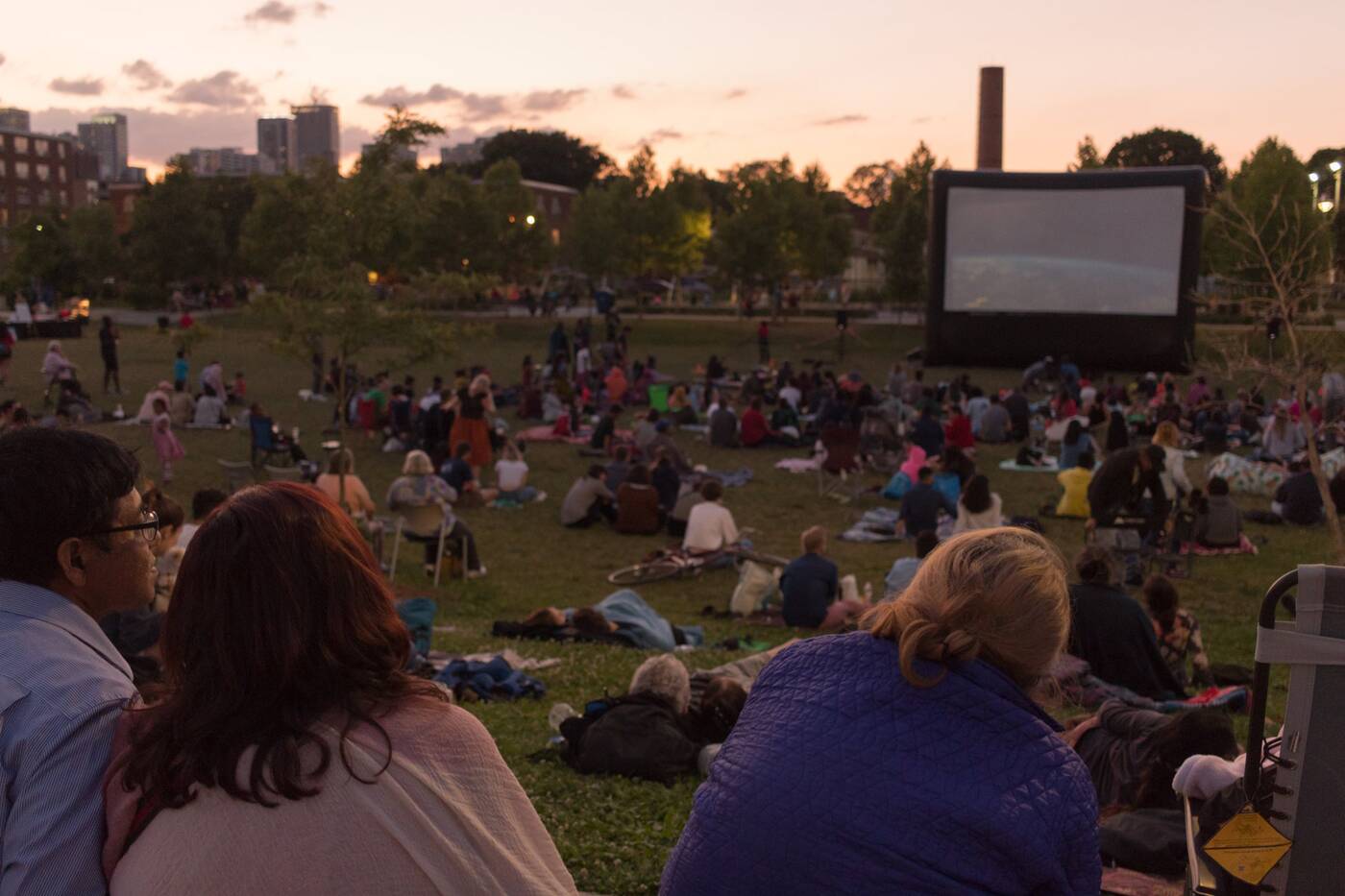 Under the Stars typically includes arts and crafts, frisbee, music, food and more before the show. Photo courtesy of Regent Park Film Festival.

After a successful introductory run in one of the city's newest parks last year, TOPS is back at the Corktown Common overlooking the skyline with a four-film series every Thursday in July, also with on-site food trucks and a merch booth.

A whole month of music, arts, food, music, dance and free outdoor movies is on throughout July in Mel Lastman Square, as the Cultura Festival includes four screenings paired alongside a huge array of cultural festivities that are all totally free to enjoy.

Downsview Park is one of the only places in Toronto where you can get away from the city without leaving it, and its Friday Night Lights outdoor film series is back with five screenings held on its big football field from July to September.

Shining a spotlight on Toronto's local arts scene, the Pleasure Dome arts collective is presenting a free outdoor screening of mutiple shorts that explore immigrant narratives that sustain and thrive in North York.

Back again is Regent Park's free outdoor movie series spanning six films every Wedneday from July through August. All films are curated by the Regent Park Film Festival and include pre-show activities and an onsite community market.

In honour of the Aga Khan Museum's The Moon: A Voyage Through Time exhibition, patrons can enjoy moon-themed programming throughout the summer, including a free outdoor movie as part of the Moon Landing Festival. 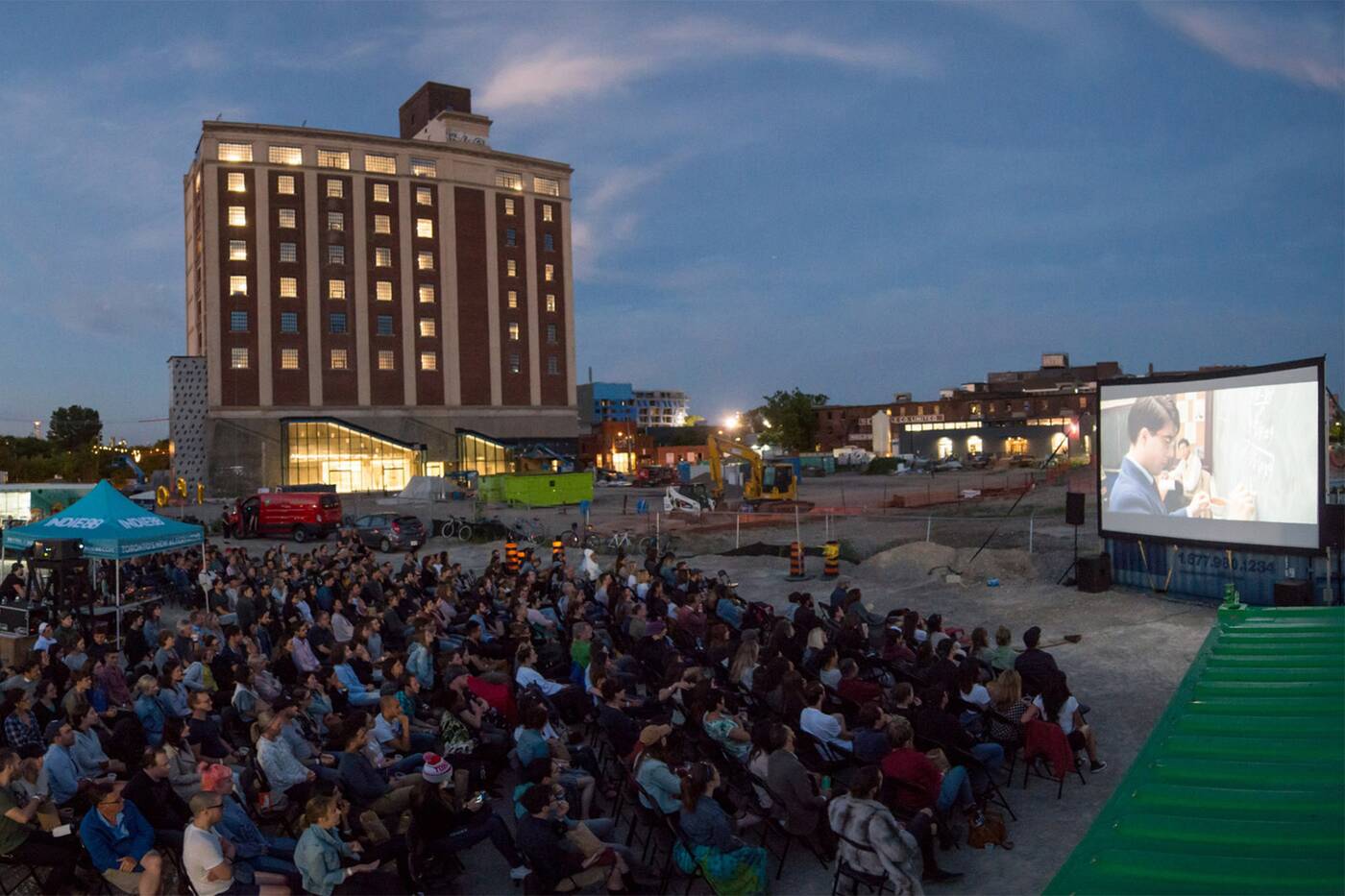 Making good use of urban spaces, Open Roof is now in its second year at the empty lot along Sterling Road. Photo courtesy of Open Roof Festival.

Back again is this neighbourhood outdoor movie series in the courtyard of St. Peter's Church in the Annex. Along with a selection of family-friendly films, there's also $1 snacks like Freezies, popcorn, pizza, candy and more to munch on.

TOPS is dropping by Bell Manor Park for the first time this year to screen three films on Thursdays throughout August. Movie-goers can take in the cool breeze coming off the lake at this park just north of Humber Bay.

The Toronto Palestine Film Festival is set to host its annual free outdoor film screening in Christie Pits this summer as part of its year-round programming ahead of the main festival on from September 18 to 22.

Movies are just one part of this festival as it celebrates ten years of pairing a curated selection of films with music from Toronto's indie scene and including food and drinks from local vendors like Amsterdam Brewery, Rancho Relaxo, Buster's Sea Cove and Fidel Gastro's.