The Amsterdam BrewHouse quietly opened its doors a couple weeks ago in hopes of getting a few of the kinks ironed out before their official opening on July 1st when the absolutely massive space will surely start filling up with throngs of thirsty Torontonians and tourists alike. Unfortunately for them, it's kind of hard to quietly open a 525 seat, 14,000 square foot restaurant and brewery on Toronto's waterfront, so the throngs have already found them.

When I visited the space at 245 Queens Quay West (near the Harbourfront Centre) on a Saturday afternoon I was told there was a waitlist for seats, even though it was barely 1pm. My party took space at one of two bars to settle in for a few laps before we ate. The first of these bars, a large curving service area that extends back toward the second bar, is serviced by a massive row of beer taps built into a former fire extinguisher. Above this bar is a large TV surrounded by a mural that, while finished, seems as though it's still waiting for someone to colour it in. 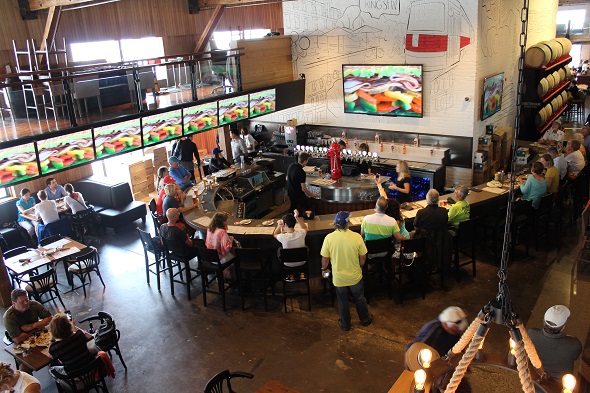 What strikes you about the space is its sheer ambition. The ceilings are high and vaulted with exposed, natural wood beams and, as you take in the enormity of the space, rows of TVs, and gleaming fermenters in the brewery, it's immediately apparent that Amsterdam has done something that exists nowhere else in the city. Mill Street's Brew Pub seems the only fair comparison, but with their proximity to Jays games, the waterfront, and more accessible transit, it's hard to think that anyone will truly be able to compete with what Amsterdam has done with this piece of waterfront property. 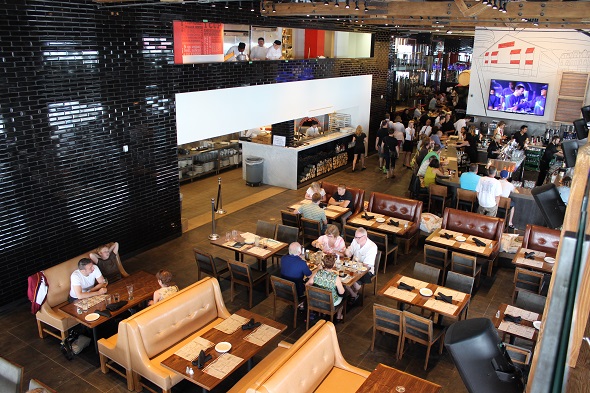 Toward the water, past the in-house brewery that's behind a wall of glass, there's a second bar to your left and, on the right, a unique, open, two-tiered kitchen that features a second floor devoted entirely to prep and a main floor for cooking that includes a wood-burning stove. Here there is more seating and what looks like a more traditional dining room as well as a terrace. 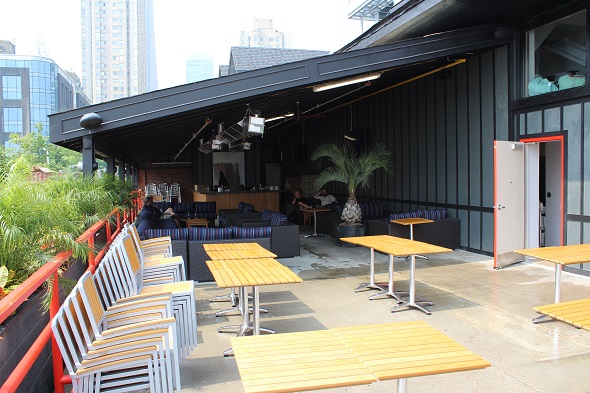 Outside are a total of three — three! — patios that, when opened, will seat an additional 300 patrons. These seem slated to be the big draw at the brew house, notably one patio that currently hosts a row of Muskoka chairs and sits almost directly on the water. 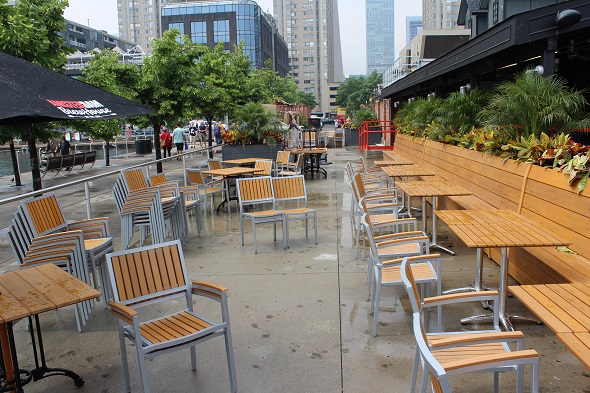 Once we finish our impromptu tour and get settled in to eat, I order another delicious Market Pale Ale, a fantastic, hoppy beer with a clean finish, and the rest of my party takes advantage of the availability of the outstanding Maverick and Gose, a sour beer collaboration Amsterdam made with Great Lakes Brewery that features salt and coriander and is aged in Thirty Bench Chardonnay barrels. 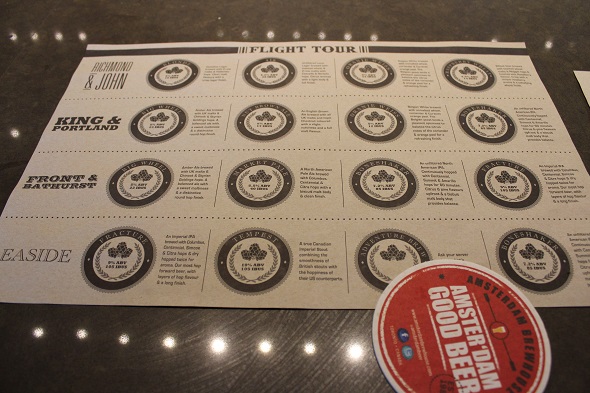 Beer is clearly the focal point here as there's a wide selection of draft, cask offerings, seasonals, and even bottles from the cellar. As a creative way to sample your way through the beer menu, the brewhouse offers a series of tasting flights, each named with a nod to the brewery's past: there's the Richmond and John, the King and Portland, the Front and Bathurst, and the Leaside. 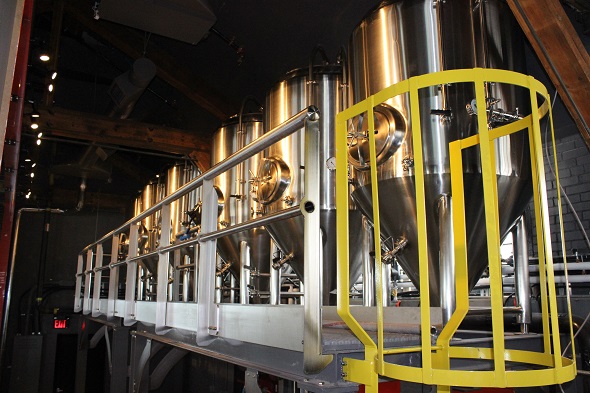 The food, as you might expect from a waterfront tourist trap, is a little on the steep side. Expect burgers like the Smoke House Cheeseburger to run you $15, salads that run the gamut from $6 - $16 (plus optional add-ons like chicken, $5, or steak, $8). There's also more serious mains like the pan-seared salmon with a miso marinade and quinoa pilaf ($22) and steak frites with hand cut fries and brussel sprouts ($32). 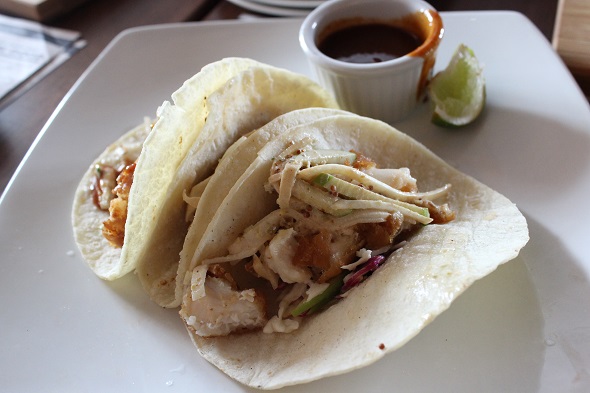 From our lunch selections, though, the food seems mostly worth the hefty price tag. We opted for the crispy fish tacos with apple fennel slaw, lime and cilantro ($13) and, though I could have probably eaten at least one more of them, they rank among the best I've tried in the city. 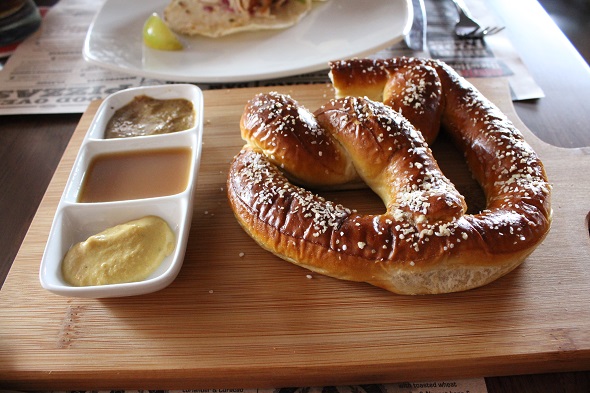 The Togarashi Chicken ($12, lead photo) was likewise on-point with a good balance of spice, freshness and crispness, but for me the Amsterdam pretzel, served with a selection of made-in-house, beer-infused mustard ($6), stole the show. Who doesn't love beer and pretzels? (I recommend pairing yours with the newly reimagined 416 beer, no longer an "urban wheat," the area-code named beer makes a return now as the 416 "Local Lager" — and it's a good one).

For dessert, the Tempest Imperial Stout Root Beer was a little confused given that it seems more like ordering a beverage than a dessert but the deep-fried oreos that accompany the drink had my dinner companions wishing it were possible to order a bowl of these by themselves. 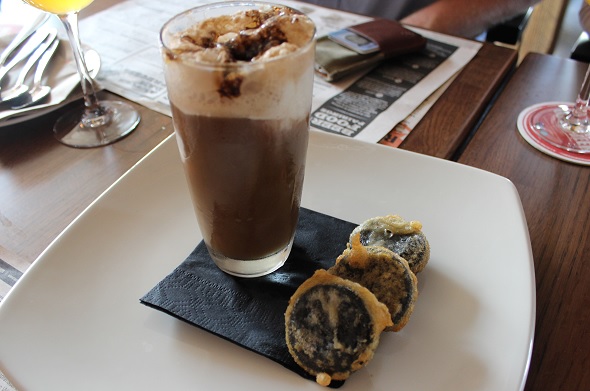 There's still a few things that need to be worked out, as evidenced by one of our late-arriving appetizers, a nearby table visibly frustrated with their inability to flag down a server, and a line at the door that at times seemed far too long given the available seats, but there's definitely enough here to overlook the little starting hiccups.

It's safe to say that, provided they continue to stay focused on what's important (i.e. all things beer), Amsterdam seems poised to establish a new Toronto dining (and drinking) institution on the city's waterfront. 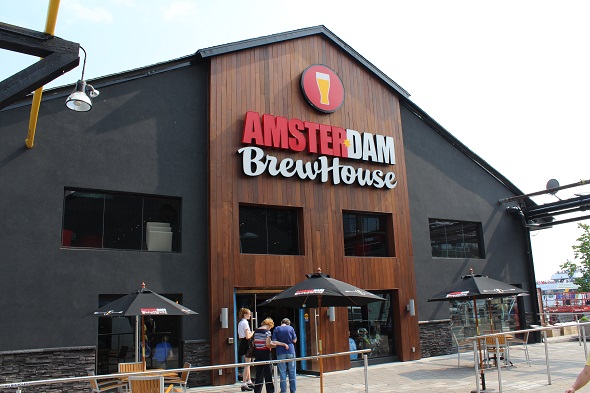 Ben Johnson also writes about beer over on Ben's Beer Blog. And he took all the pictures for this post.