The history of Toronto's famous Stollerys store at Yonge and Bloor

During the mid-1950s, I was a teenager and worked for one summer at the Imperial Bank at Yonge and Bloor Streets. Each day, on my lunch hour, if I strolled south on Yonge Street, I passed by Stollerys and gazed in the display windows.

However, I never ventured inside the store as I knew that the prices were beyond my means. My employment at the bank was $28 per week. At the time, I knew nothing about Stollerys' long and distinguished history in the city of Toronto's retail trade.

Frank Stollery was born in Yorkville in 1879, during the days when it was a semi-rural community, surrounded by fields and farms. When he was a boy, residents of Yorkville journeyed to Toronto via the horse-drawn streetcar service on Yonge Street, its terminal being King Street near the St. Lawrence Market.

Frank quit school when he was 14, which was not uncommon in that day. He found employment in a shop where he learned the skills required to cut men's shirts and ties.

Being adventurous, he relocated to Montreal and by age 20 was a foreman in a Montreal clothing factory, earning $12 per week.

At age 21, he joined the Royal Canadian Regiment, but remained in service only a year. Returning to Toronto in 1901, he borrowed $1000 from his father and opened a haberdashery shop on Yonge Street, south of Bloor.

A few years later, he relocated his business to the southwest corner of Bloor and Yonge Streets (1 Bloor Street West). He rented the property, but in 1928, purchased the site and commenced renovations. He also purchased the building to the south of his shop and incorporated it into the store.

However, in 1929, the City expropriated 20 feet on the north side of his shop to widen Bloor Street. This essentially created a situation in which Stollerys and many of the other businesses on the south side of Bloor Street were unable to operate, until the widening had been completed.

Undaunted, Stollery demolished a portion of his shop behind the hoarding, and began the construction of a new structure. However, he continued operating in the remainder of the premises until the new building was completed. 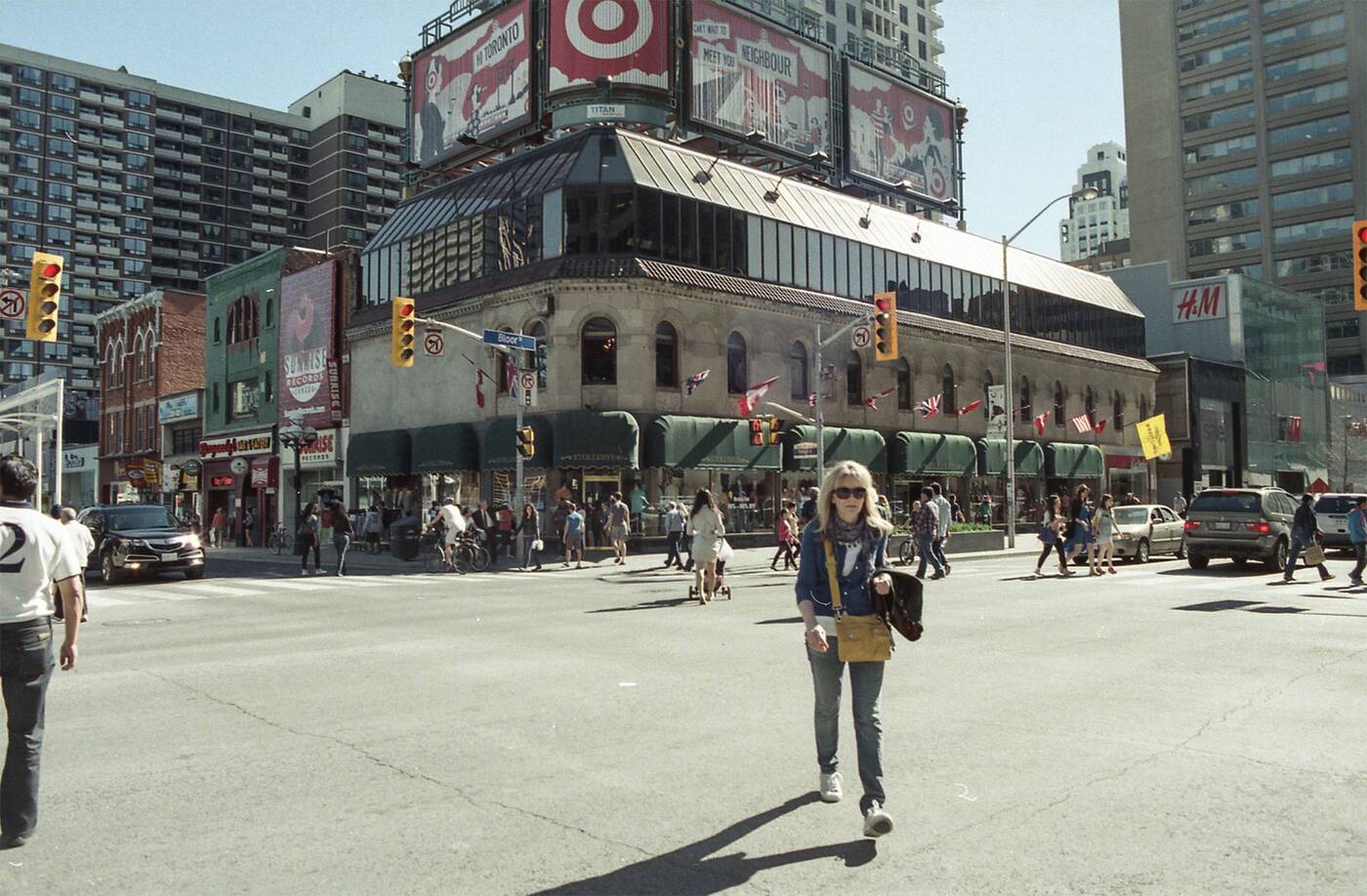 Stollerys as it looked in 2013. Photo by Jeff Jefferson.

The attractive new structure opened about 1930 or 1931. It possessed two-storeys, with large display windows on the ground floor. The windows on the second floor were topped with rounded Roman arches, and the roof possessed red tiles.

The decorative stone carvings on the facade reflected Art Deco, with modern Italian trends. The store's display windows became famous as they were meticulously arranged to feature the most up-to-date styles of expensive suits, jackets, raincoats, ties, shirts, and pyjamas.

Frank retired in 1968, selling the business to his son Arthur, and Ed Whaley, each owning 50 percent of the enterprise. Whaley managed the store, while Frank remained a silent partner.

Whaley renovated the store and also leased the building to the immediate south, including it as part of the shop. When the business was at its peak in the 1970s and 1980s, it employed 100 people and its assets were valued at $30 million.

In the years ahead, due to internal business problems, the store became neglected, the display windows becoming rather shoddy. 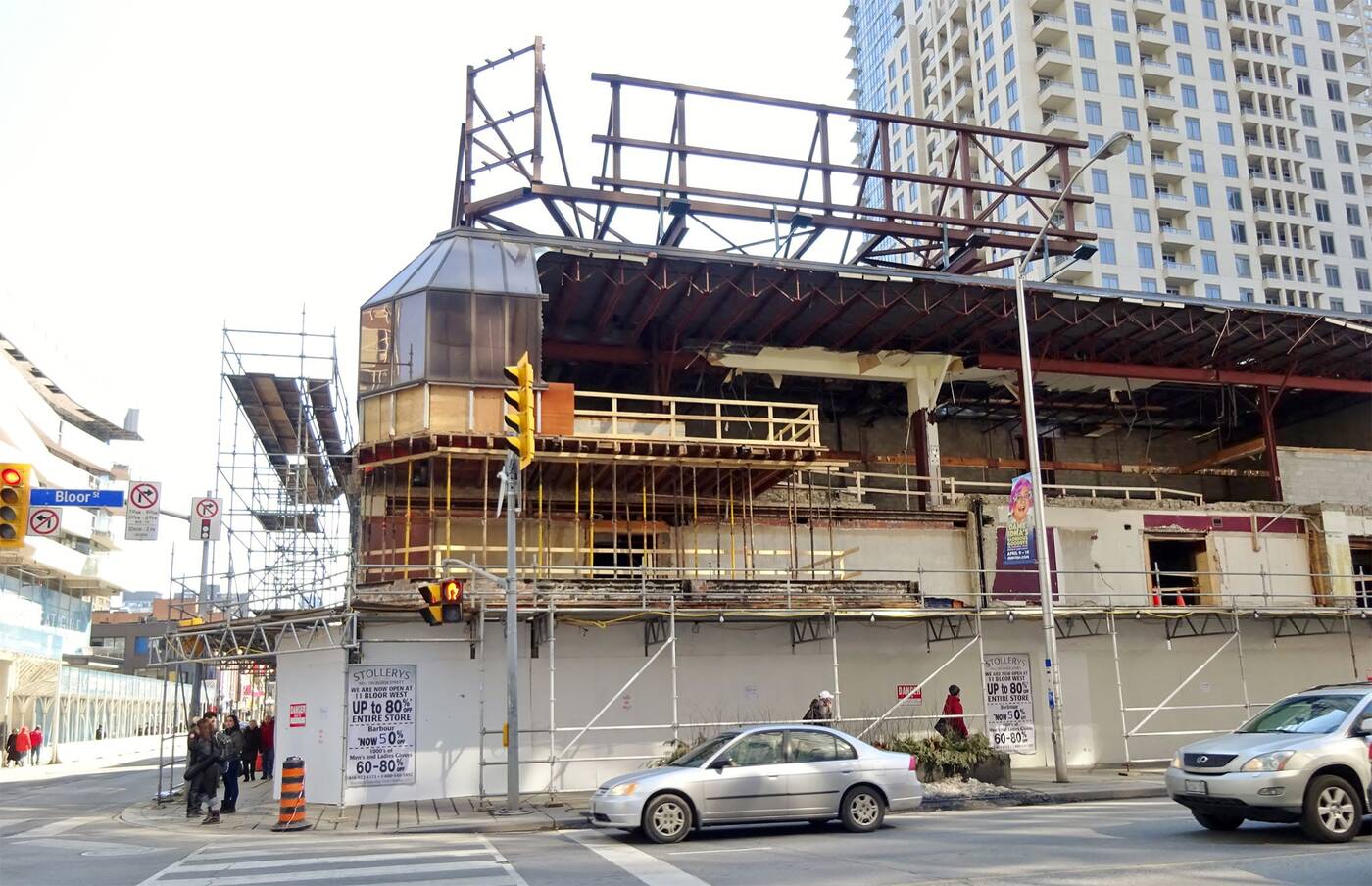 Stollerys as it was being hastily demolished in 2015. Photo by Jim Cagney.

By the second decade of the 21st century, the value of the land where the shop was located was astronomical. It was sold and quickly demolished in 2015, its demolition accomplished within a single weekend.

The site formerly  home to Stollerys will soon be home to a huge new tower called The One. Construction is well underway and will be the new home of Toronto's flagship Apple store.

Doug Taylor was a teacher, historian, author and artist who wrote extensively about Toronto history on tayloronhistory.com. This article first appeared on his site on September 13, 2016 and has been republished here with the permission of his estate. The article has been modified slightly.