Is Stollerys being hastily demolished?

It looks like Councillor Kristyn Wong-Tam's fear that iconic menswear store Stollerys would be hastily demolished was justified. According to multiple photos posted to social media this afternoon, workers have begun the process of knocking down the more than 80-year-old building ahead of an attempt to have it preserved.

It must be said, it's not clear at this stage what exactly the workers are doing, though photos show men in cherry pickers knocking out sections of wall along Bloor St. with metal bars, removing windows, and taking down awning that skirted the ground floor.

Cllr. Wong-Tam was concerned Stollerys and many of the surrounding buildings could be cleared and the site left vacant for several years due to a loophole in the provincial building code that allows the owners of commercial buildings to raze their properties practically at will.

No plan for redeveloping the site has been filed with the city. 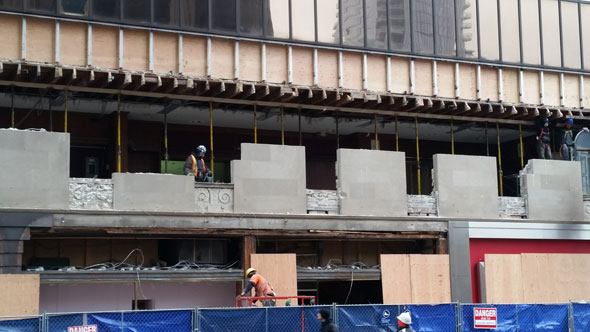 The upscale menswear store opened at Yonge and Bloor 114 years ago, making it one of the city's oldest continually operating businesses. The store and other nearby buildings were bought last year by Mizrahi Developments, which, according to a Toronto Star interview with the owner, is planning to build a 75-storey condo tower called "The One" on the site.

A motion was passed at the last meeting of Toronto and East York Community Council asking the city's heritage staff to study the building with an view to having it protected.

Right now, it looks like they wont get the chance.