Patios across Toronto have reopened for Stage 2 of the province's plan, meaning you can now enjoy a sunny sangria at select patios in the city.

Not all outdoor seating has 0pened up for dine-in just yet, but those that have are implementing new measures to comply with city rules around how food establishments can keep their staff and customers safe 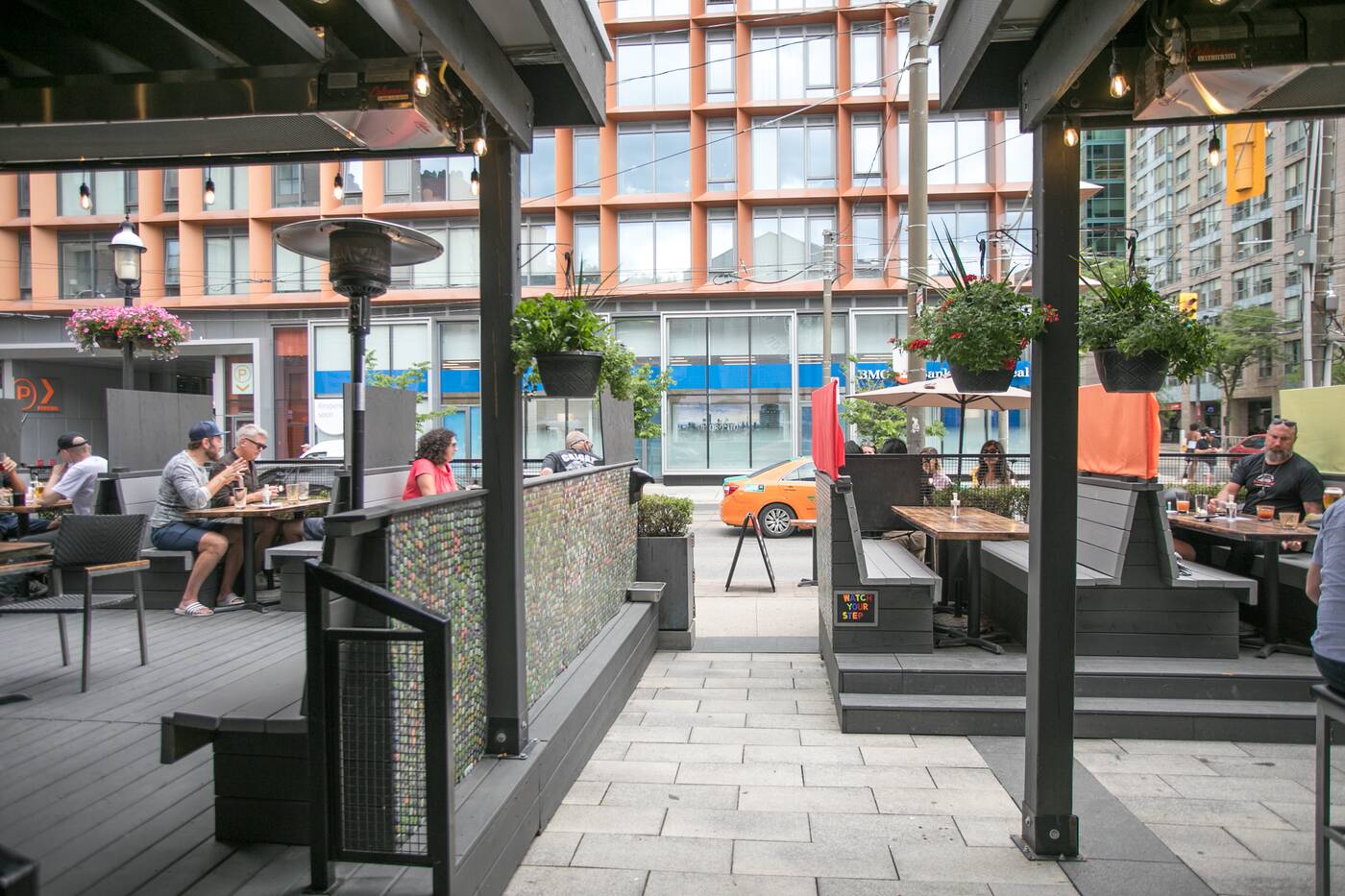 The most obvious is that groups must be seated two metres from other groups.

Patios like the Score on King have installed barriers between booth seats, which allow guests to utilize existing seating that's not technically 2 metres apart, but with an extra layer of protection dividing them. 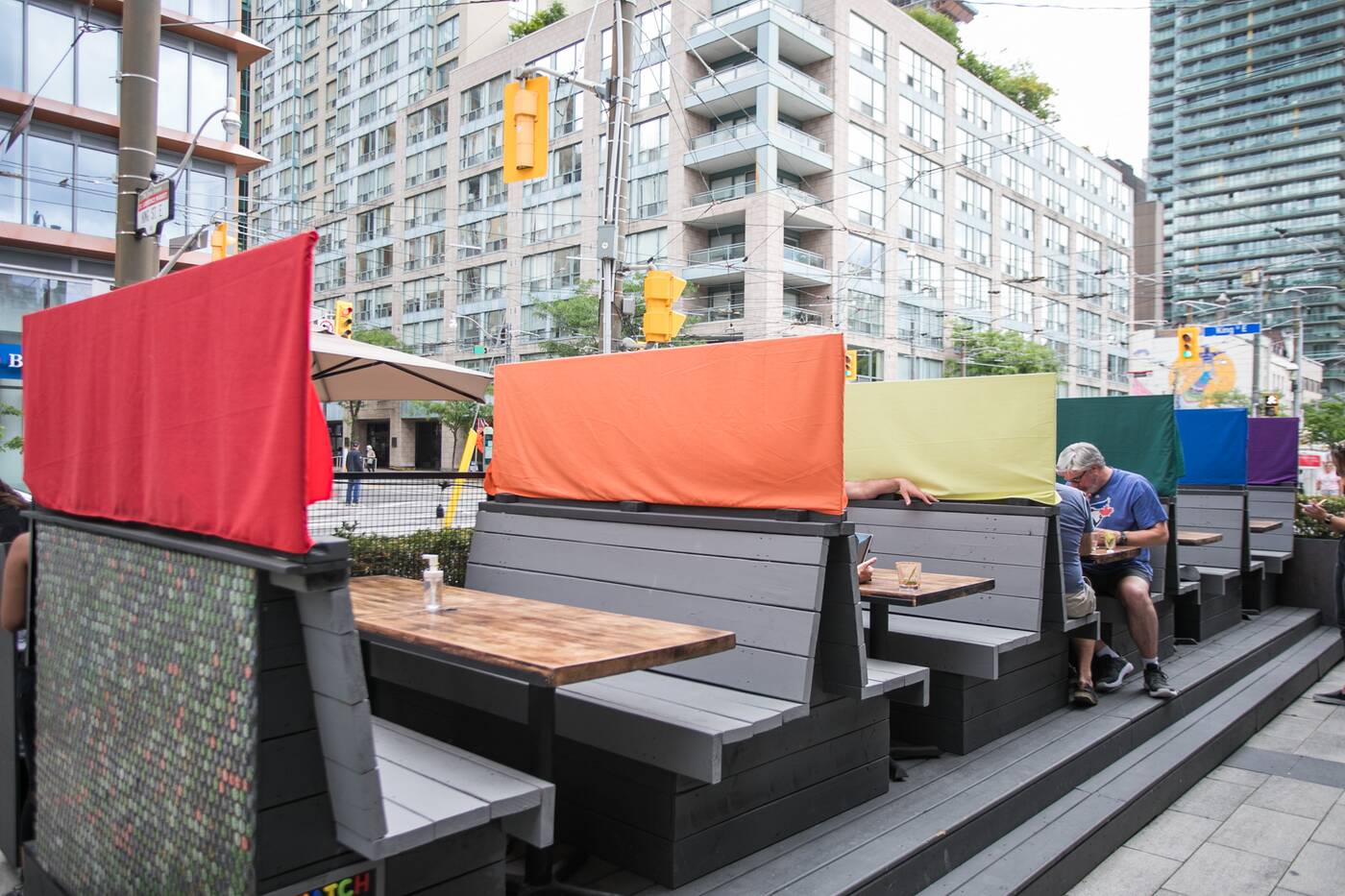 Booth seats at Score on King are now separated by additional dividers. Photo by Fareen Karim.

Some of the barriers are currently draped in rainbow colours to celebrate Pride Month.

Meanwhile smaller patios like the one at Woodhouse Brew Pub may not have their tables exactly two metres apart, from edge to edge as the rule implies, but guests are seated in a way that adheres to distancing. 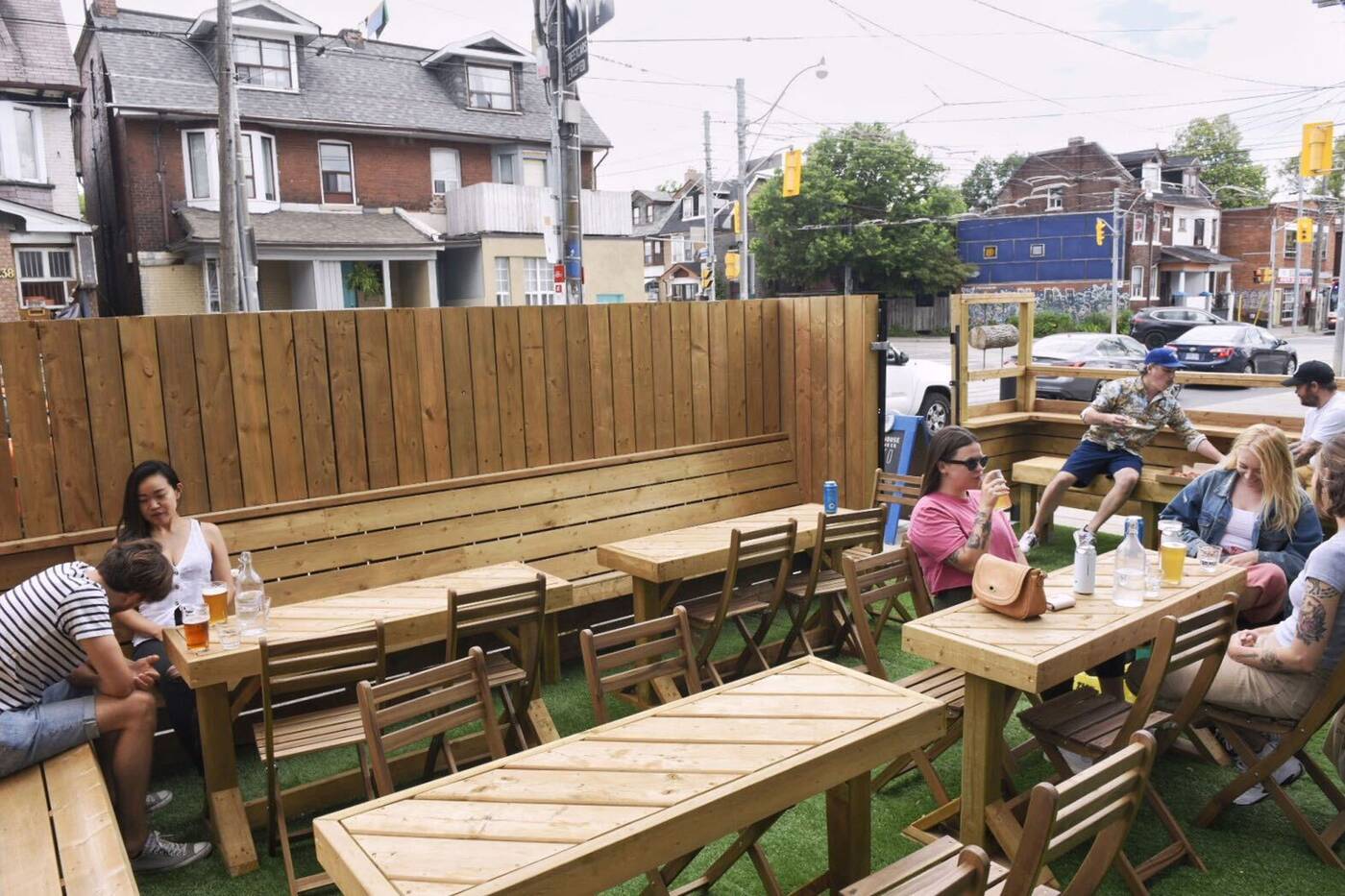 Patios like the one at Woodhouse Brew Pub strategically seats customers at the appropriate distance. Photo by Hector Vasquez.

Tents and canopies are no longer allowed to hang over patios, meaning you might not get the shade coverage you need, though umbrellas are allowed, like the ones seen on Oretta's King Street-side patio. 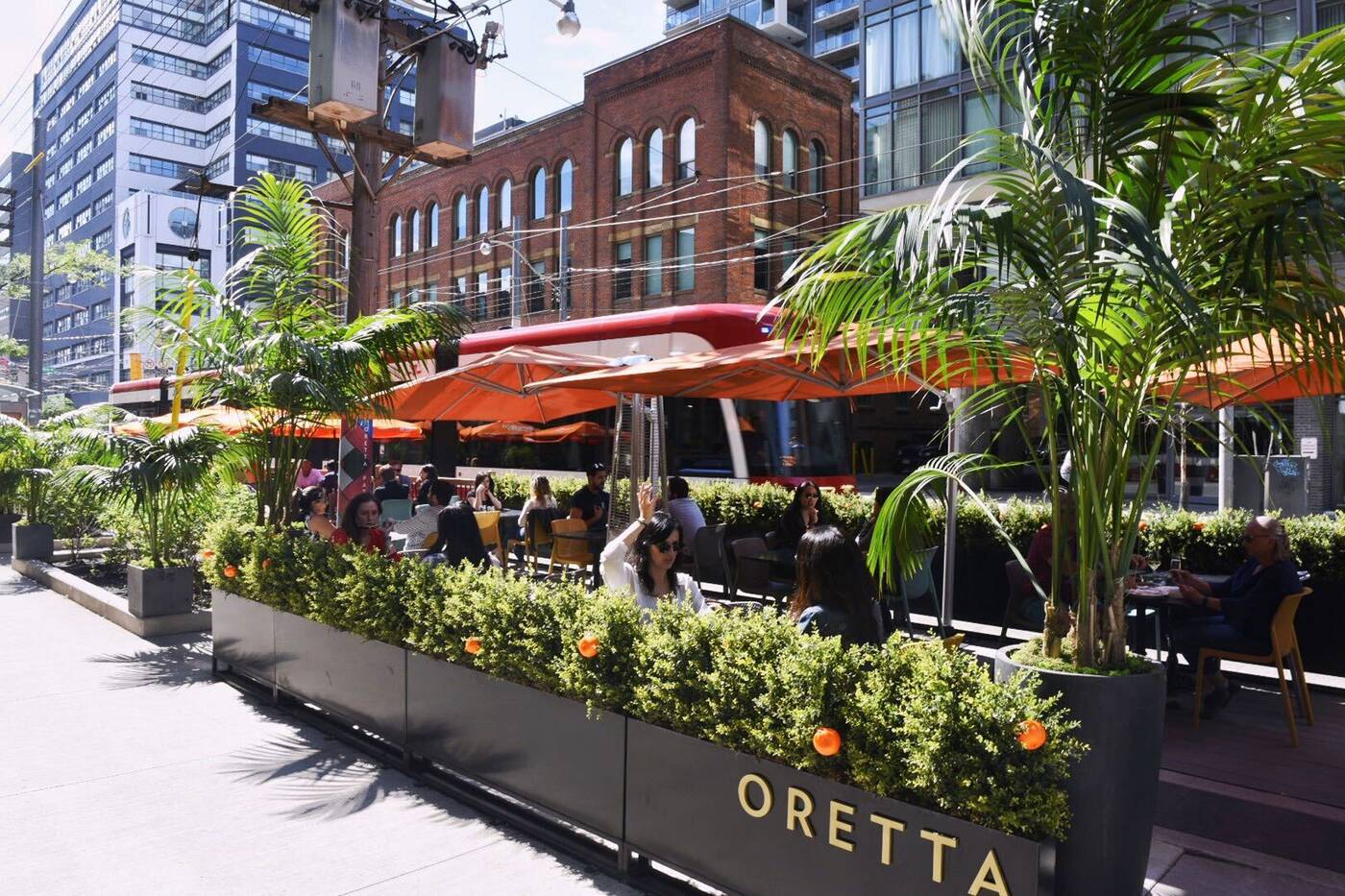 Umbrellas are allowed by canopies covering patios are not, according to City rules. Photo by Hector Vasquez.

Anywhere that might see a lineup is required to have floor markers, and restaurants must ensure that waiting customers are nowhere near customers dining on the patio.

Signage promoting physical distancing is required at the entrance. 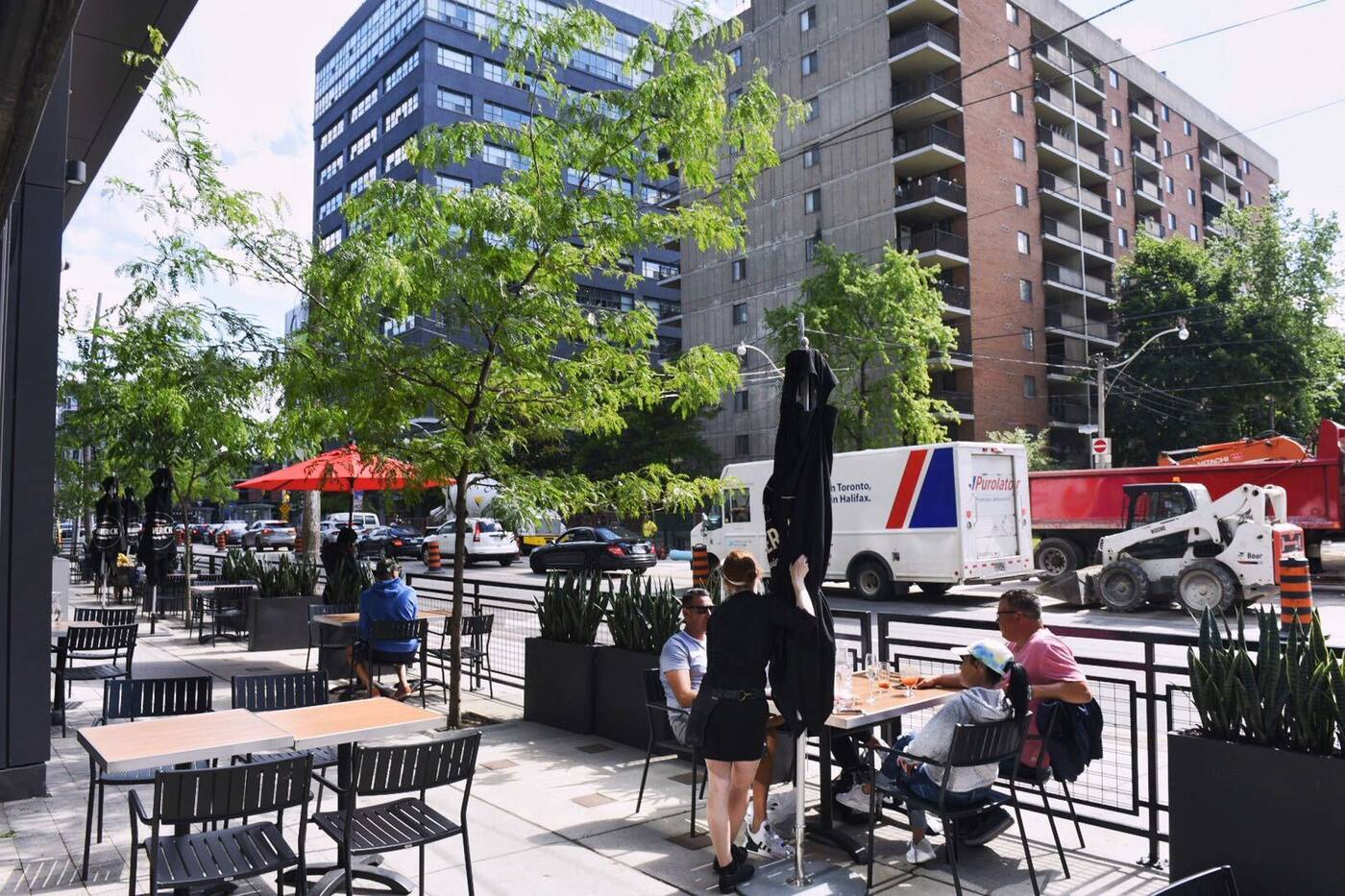 The patio at Maverick has its tables distanced 2 metres apart. Photo by Hector Vasquez.

You might also notice that your server is trying to keep things as concise as possible: city rules require that servers spend as little time within your two-metre radius as necessary.

While a reservation system has been encouraged by the City, not all retaurant or bar patios require them. If you plan on dropping by your favourite watering hole, make sure to check their website to see if you need to book a table first.