Woodhouse Brew Pub is currently open but their offerings and services may be affected due to the pandemic. Please contact the business directly for more information about any changes. Is this your business? Please contact us if you would like to update this message.

Founder of the brewing company Graham Woodhouse teamed up with Jesse Fader of Favorites and Paris Paris to create an unpretentious environment serving American-tavern-style food that pairs well with Woodhouse beer. 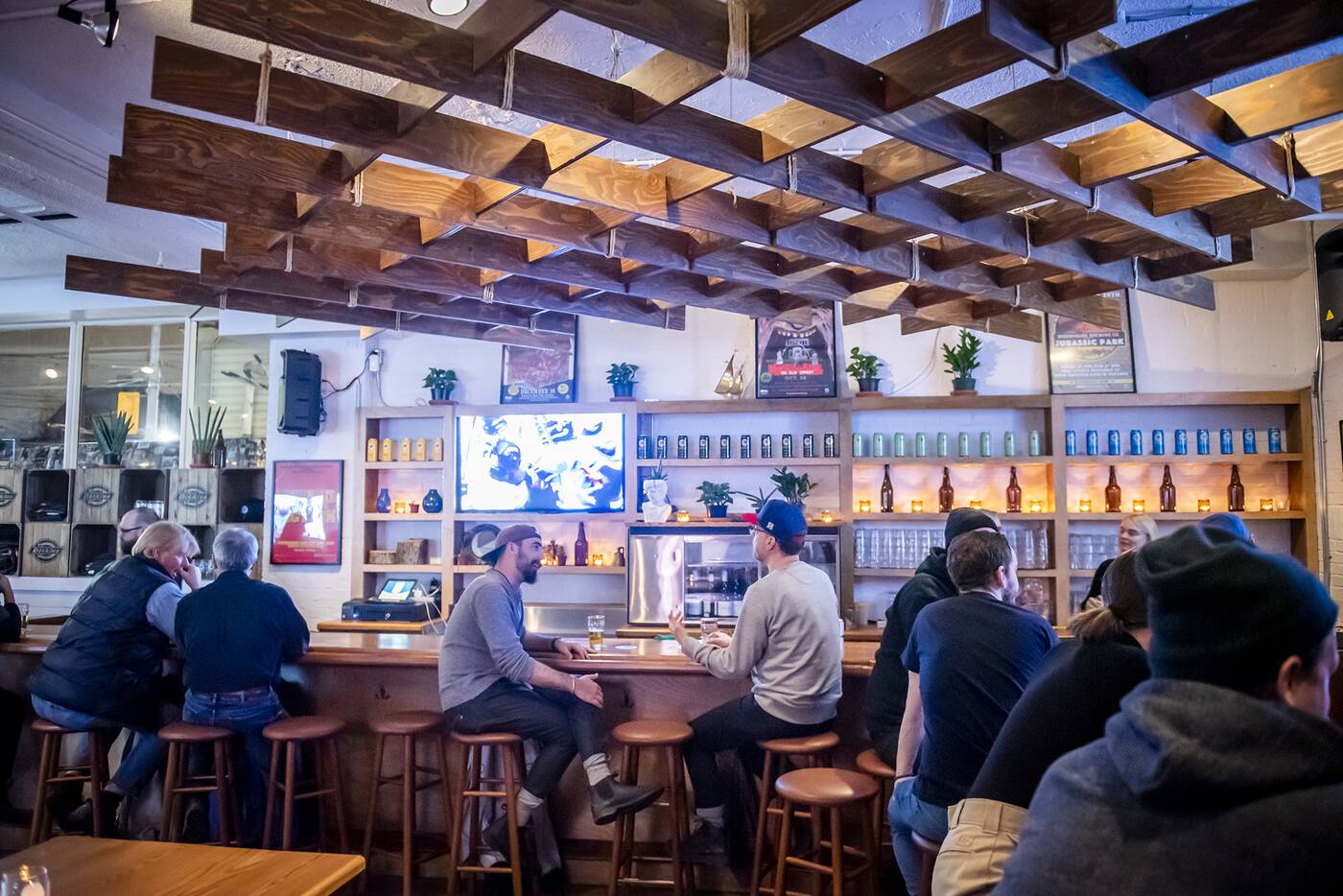 The space was previously home to Lot 30, and while Woodhouse has inherited all their old brewing equipment for experiments, they've drastically made over the look of the place with white-walls, big screen TVs, communal seating and a wraparound bar. 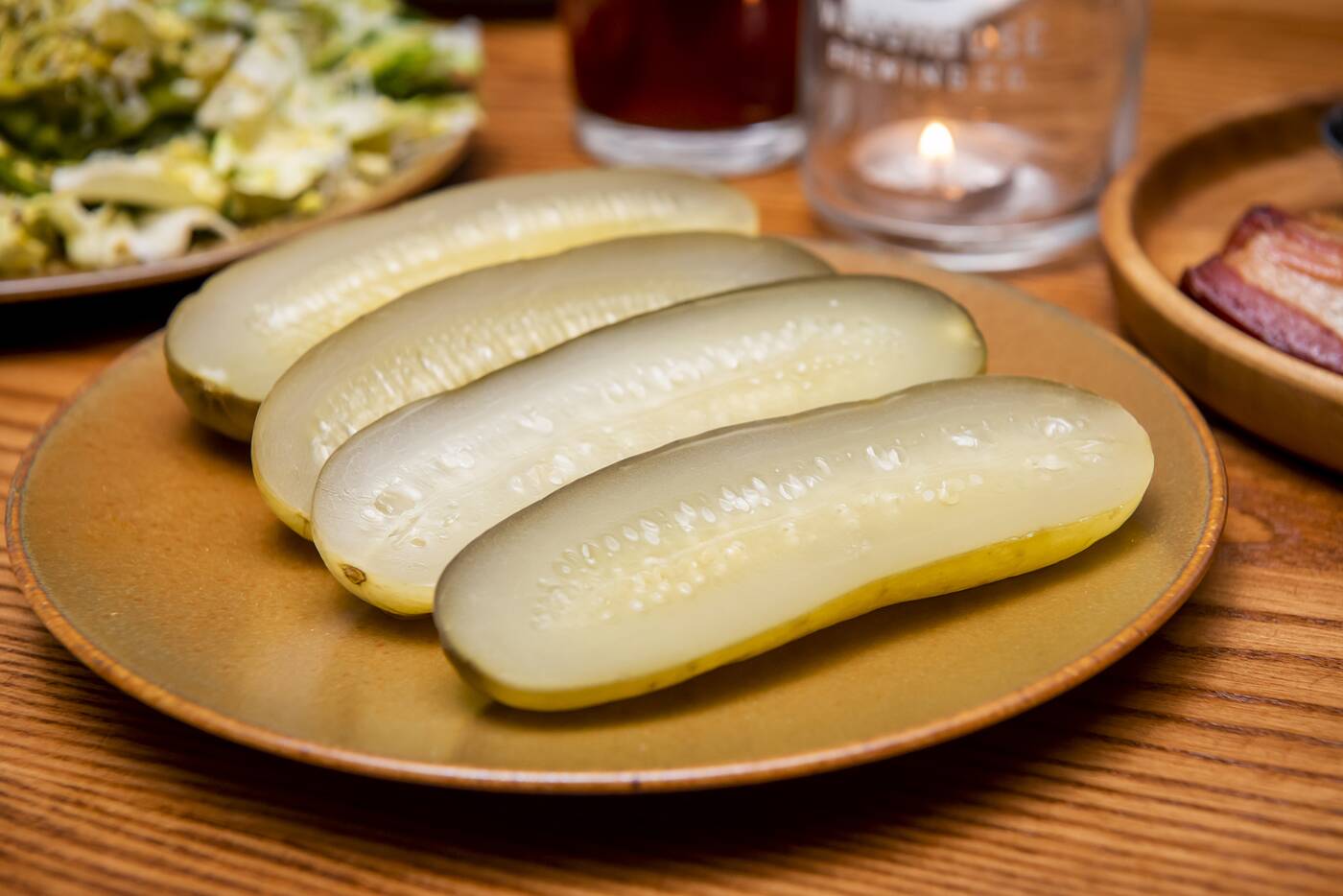 Putter's dill pickles ($4) sliced in half make for a great affordable nibble with beer: crisp, salty and mildly sour. 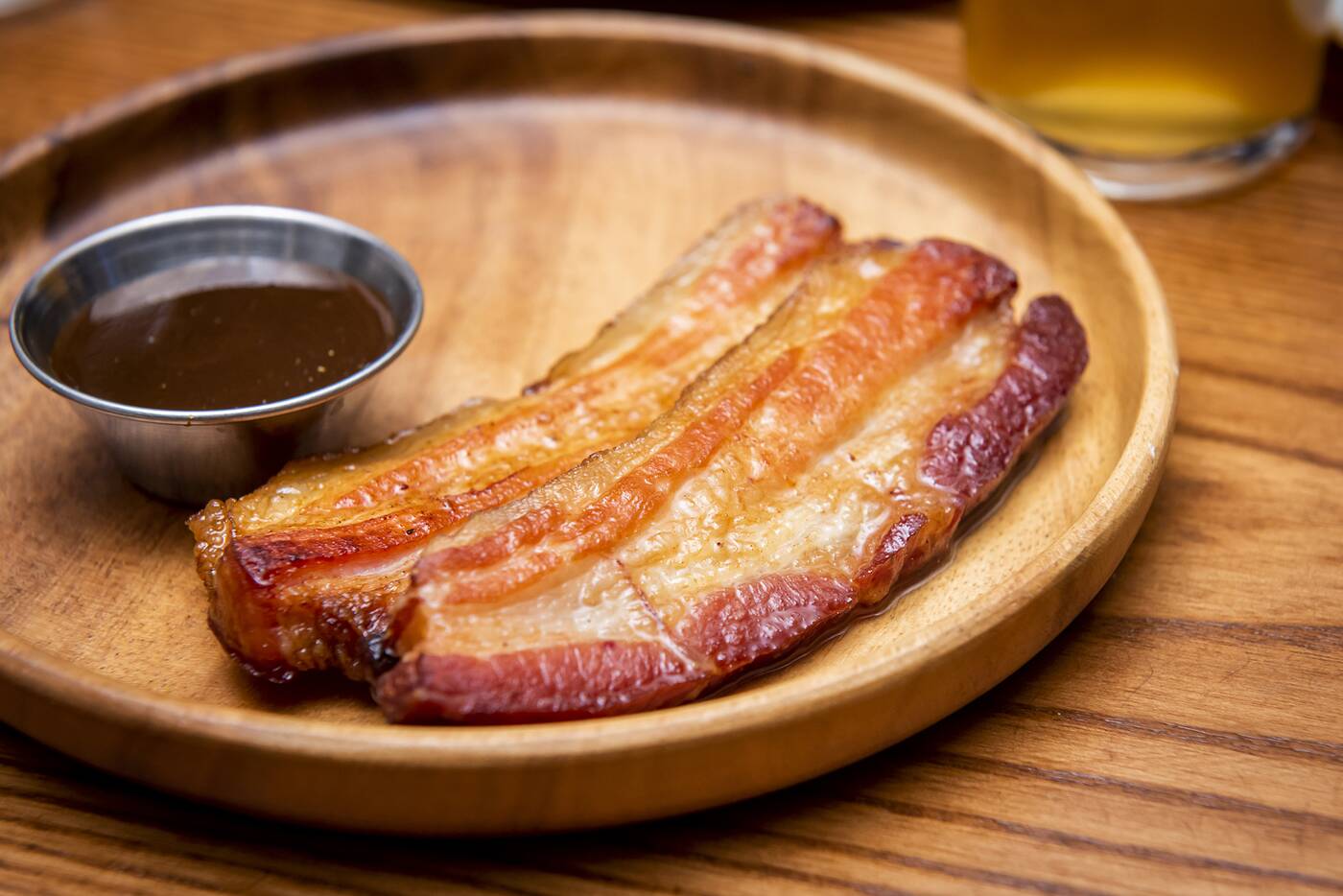 Thick cut sliced bacon ($8) is actually made in house. Cured, smoked, sliced and seared on site, it's juicy, smoky and served with tangy HP sauce. Either another very basic snack with beer or possibly a DIY add-on. 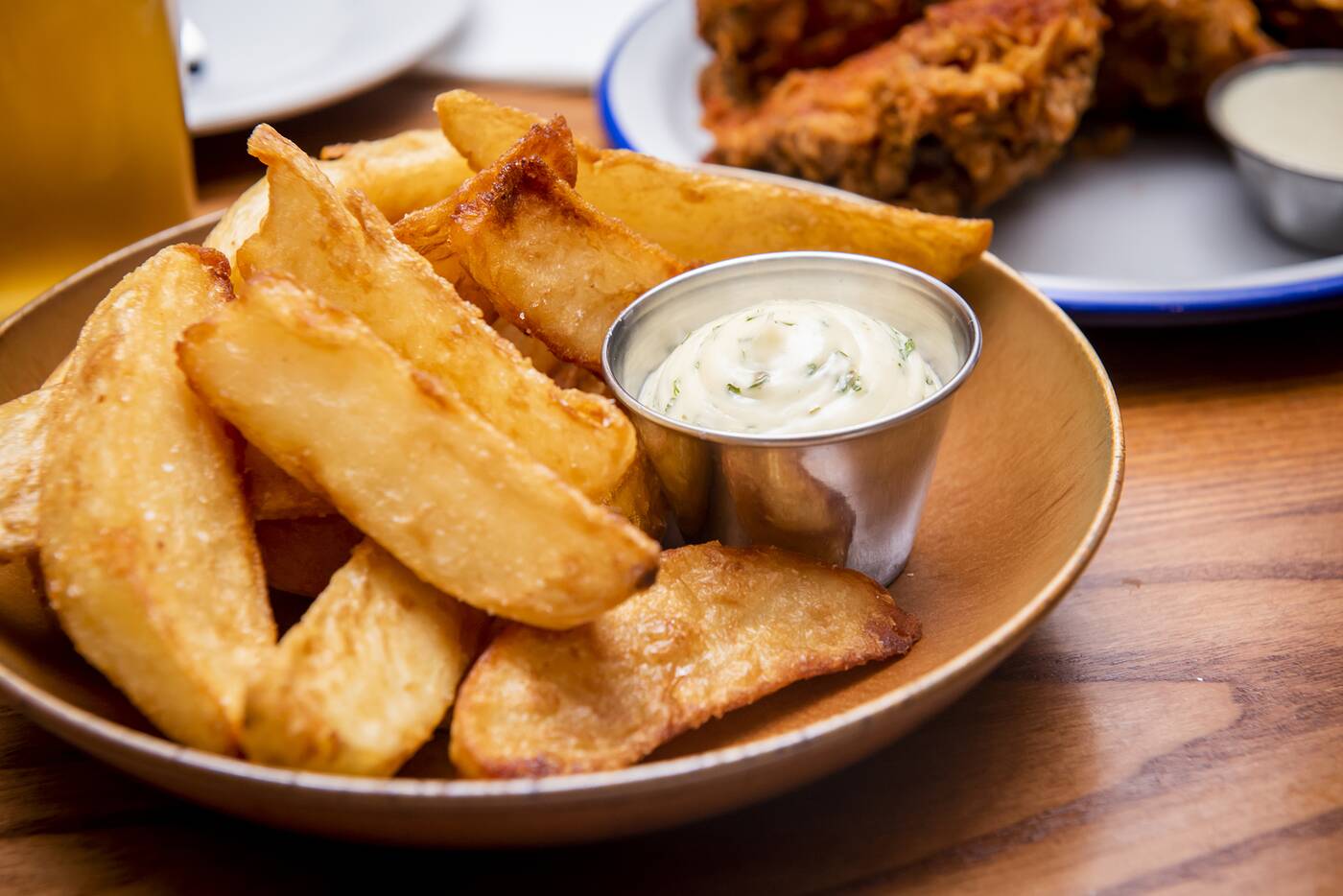 Potato wedges ($7) are crispy on the outside with a fluffy mashed potato consistency on the inside, and are served with an unexpected but tasty peppercorn ranch. 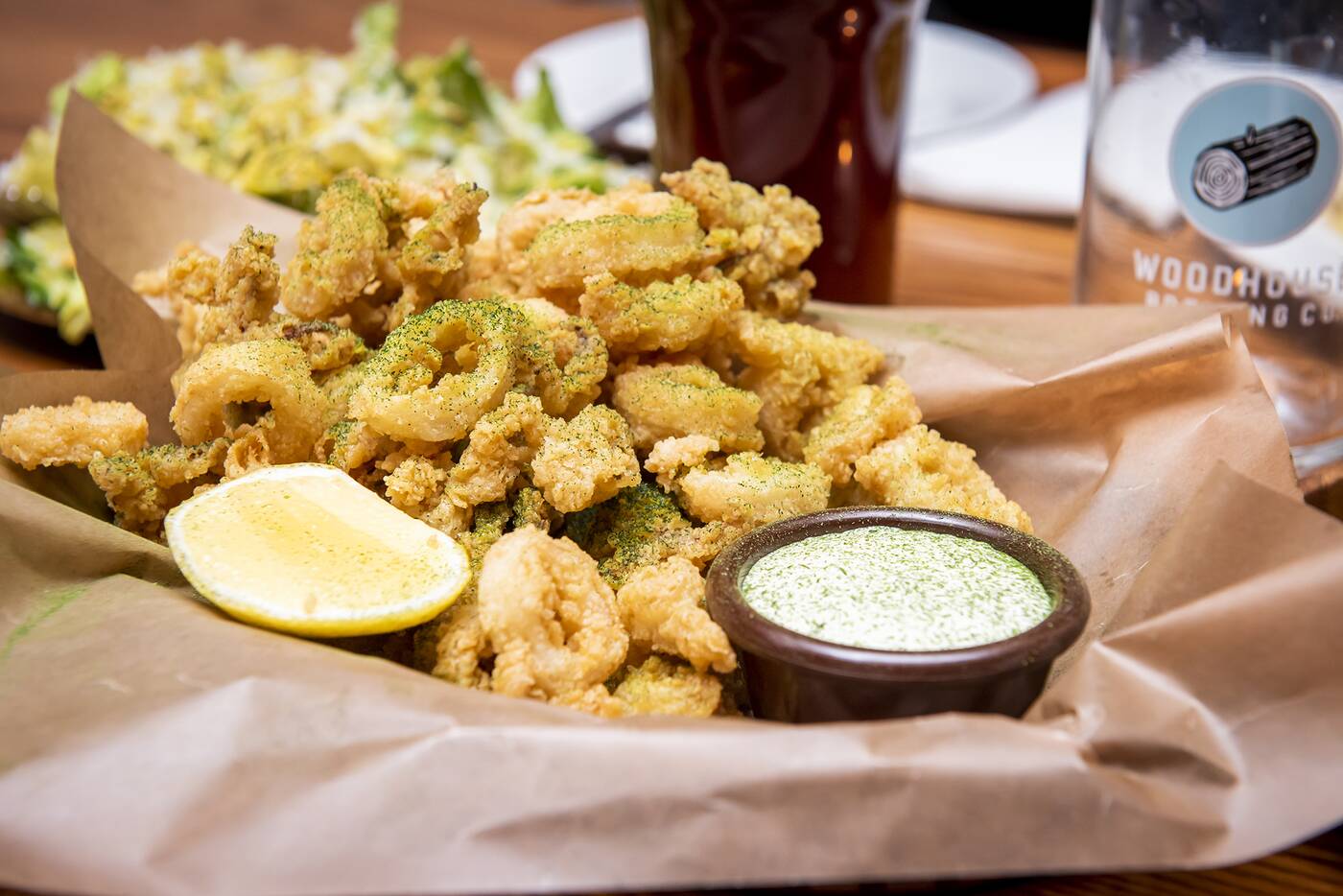 Golden Calamari ($14) is aptly named, not for its dusting of dehydrated dill but for it's super crunchy and light coating thanks to a dredge that incorporates rice flour. The dip totally steals the show again, a garlic parmesan affair inspired by a classic pub garpar wing sauce. 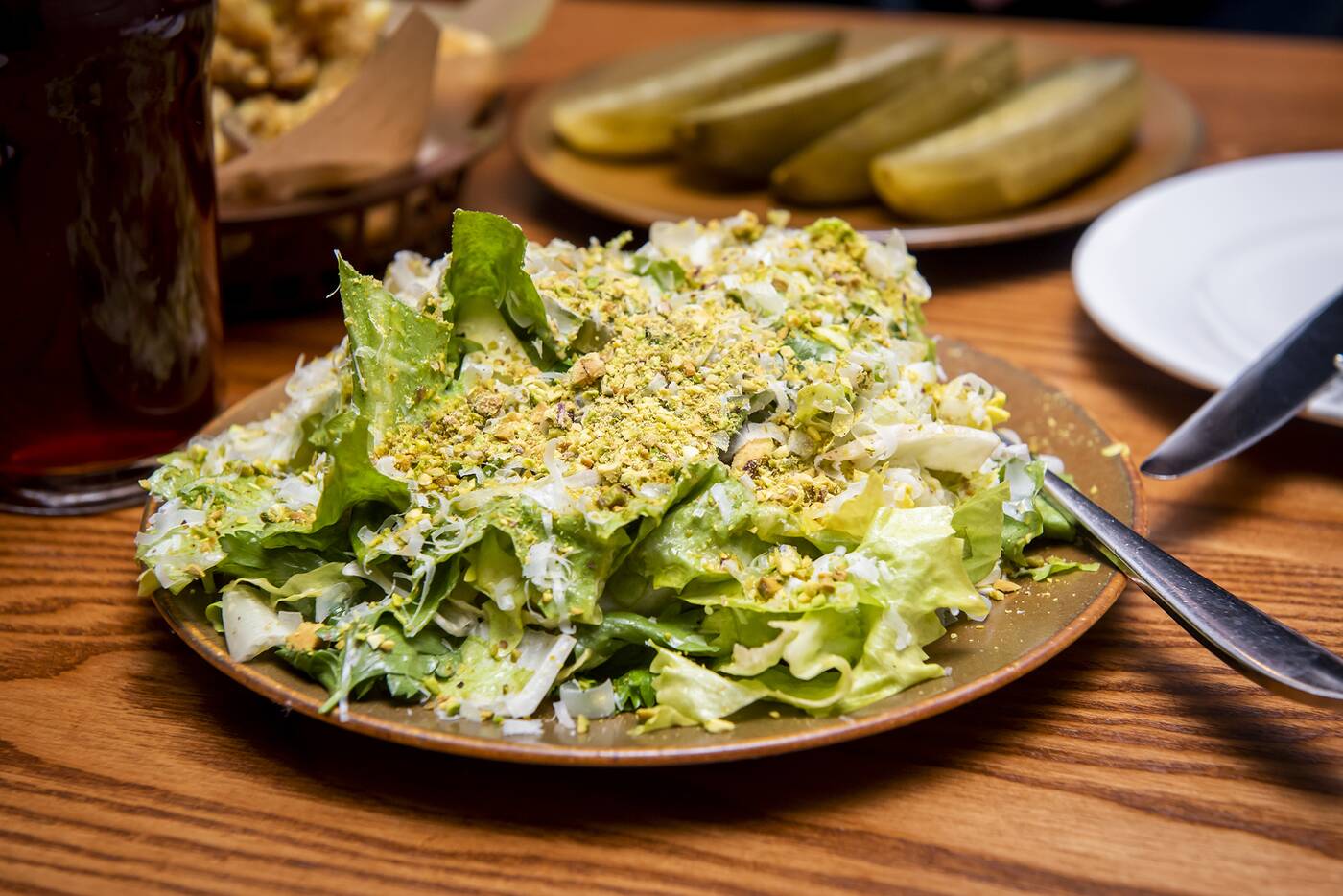 A Green Caesarish salad ($14) is a bit deceptive, only really called a Caesar for the association and because of an anchovy dressing. Otherwise, escarole is loaded with pickled celery, aromatic parsley and ground Sicilian pistachio for a salad that isn't really a Caesar but does have a lot of texture and fun. 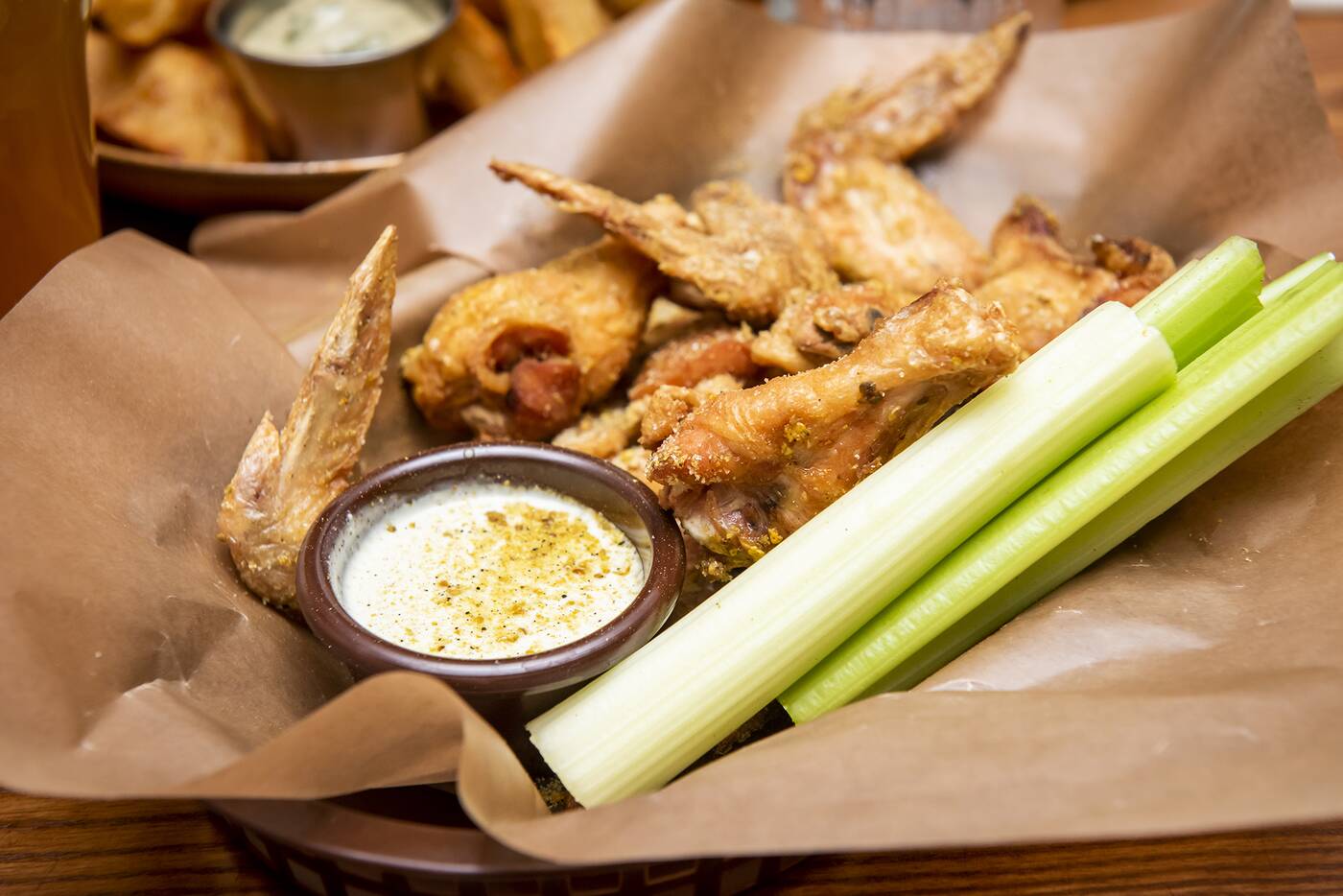 I'd opt for lemon pepper wings ($14) over the calamari only because of a house lemon pepper seasoning that uses dehydrated lemon peels to bring out a delightfully strong citrus-y taste. Again, a blue cheese dip is smashing, and classic celery sticks accompany. 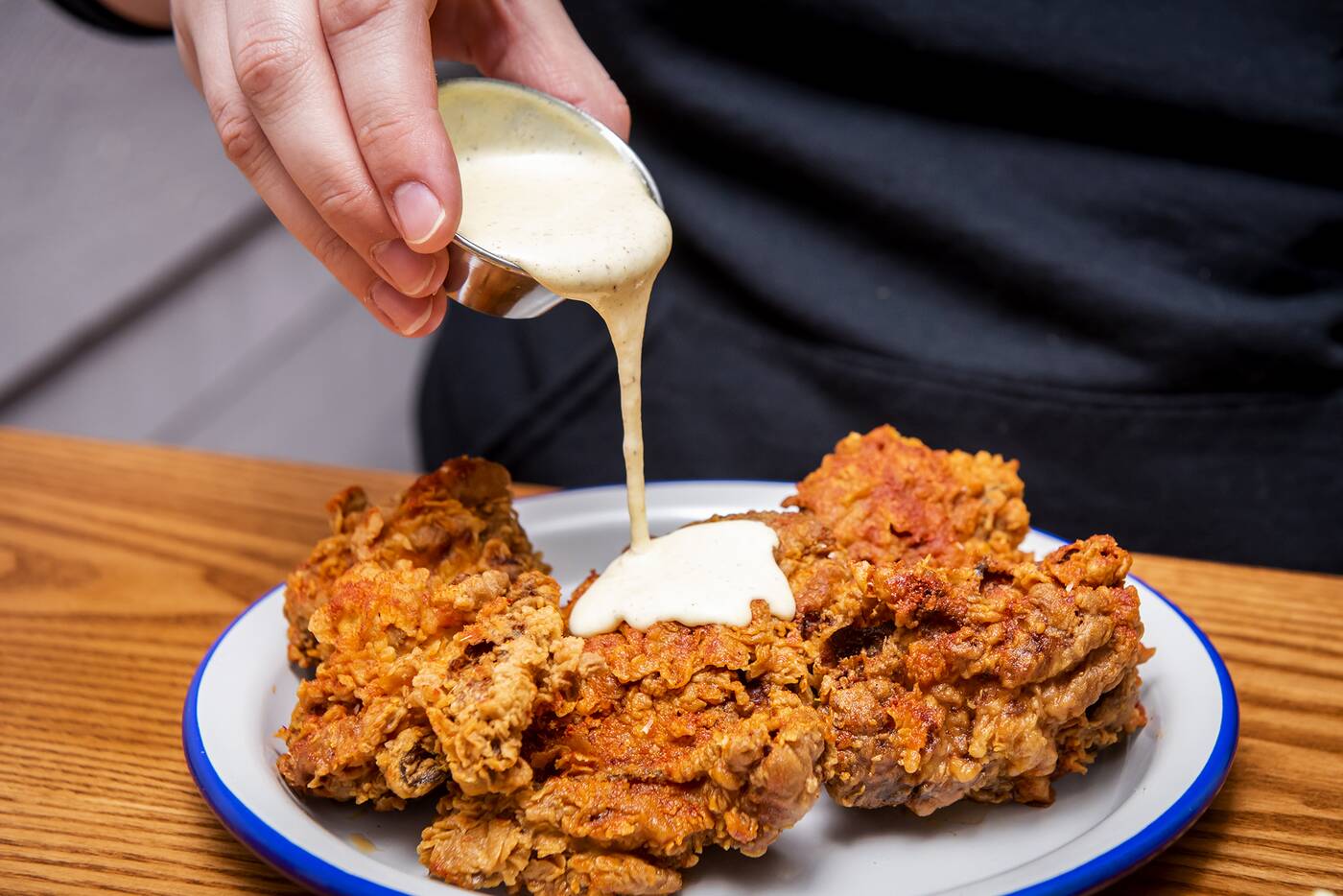 Chipotle fried chicken ($15) comes in an order of three boneless, spicy pieces and is served with a dreamy Alabama white sauce made with horseradish, mayo, honey and black pepper. 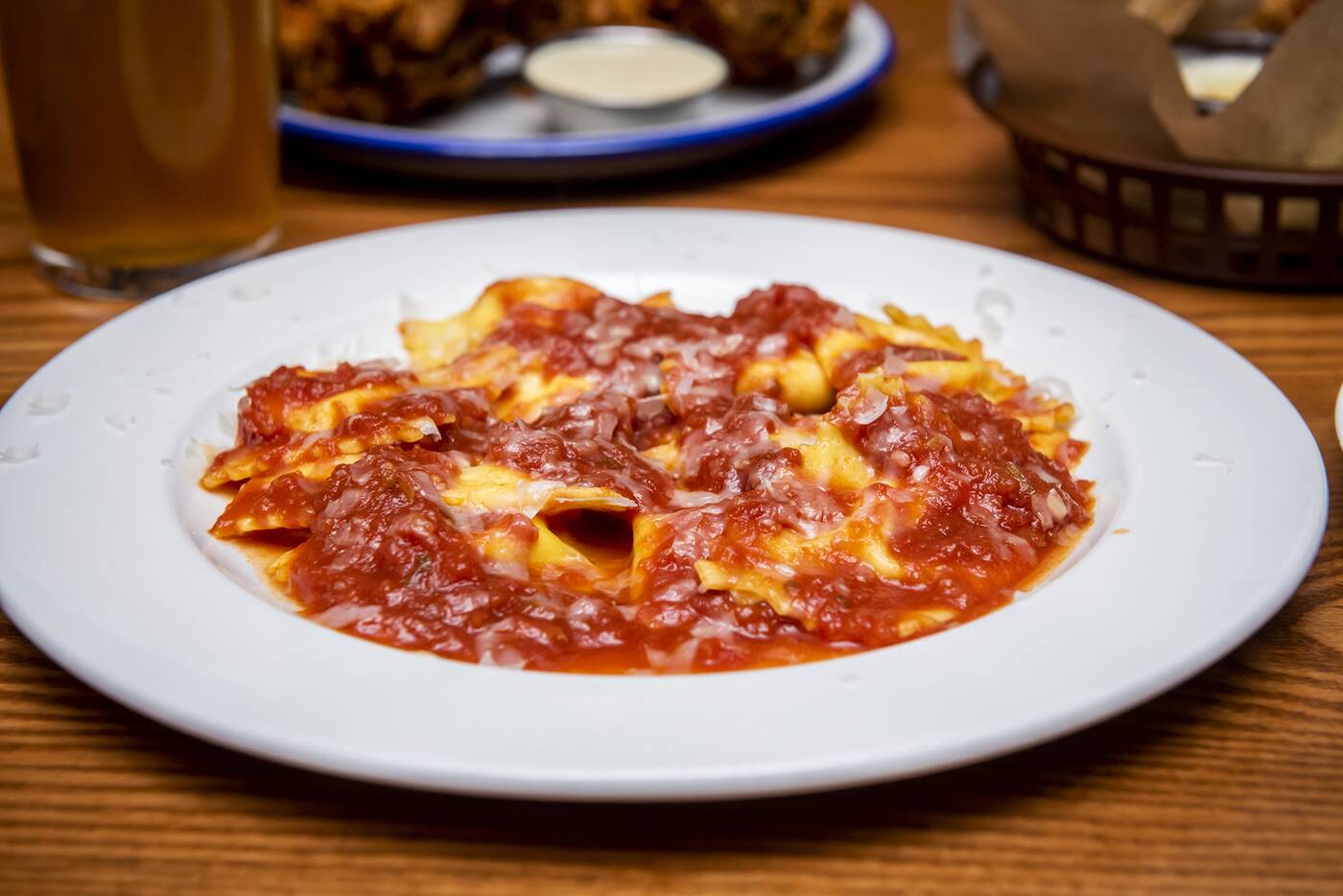 Cheese ravioli ($18) is one of two vegetarian fresh pastas made in house every day, stuffed with spinach and salty ricotta and smothered in a sweet tomato sauce. 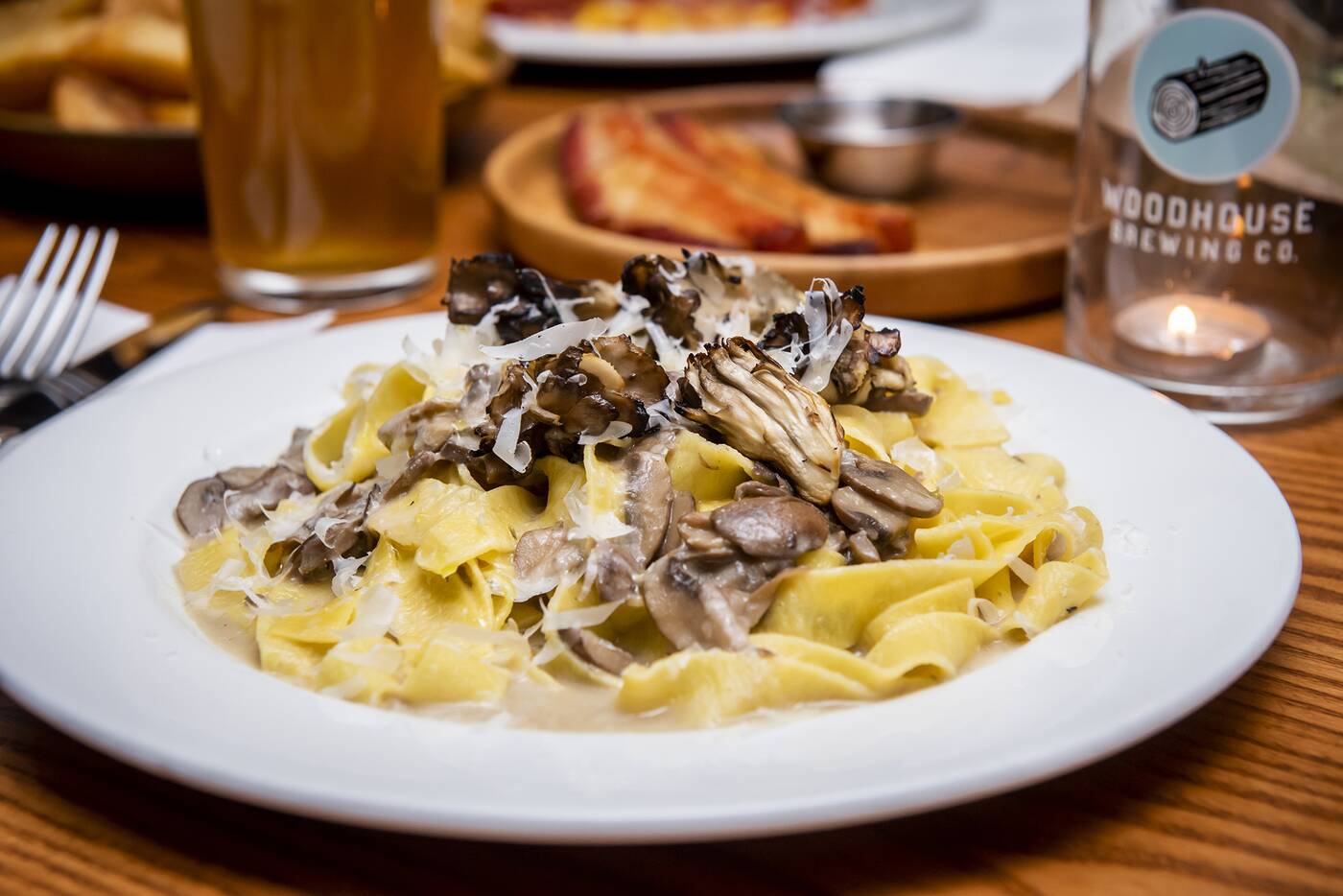 The other is a mushroom stroganoff ($18) that sees grilled mushrooms mingling with hand-cut egg noodles in a light but creamy sauce. 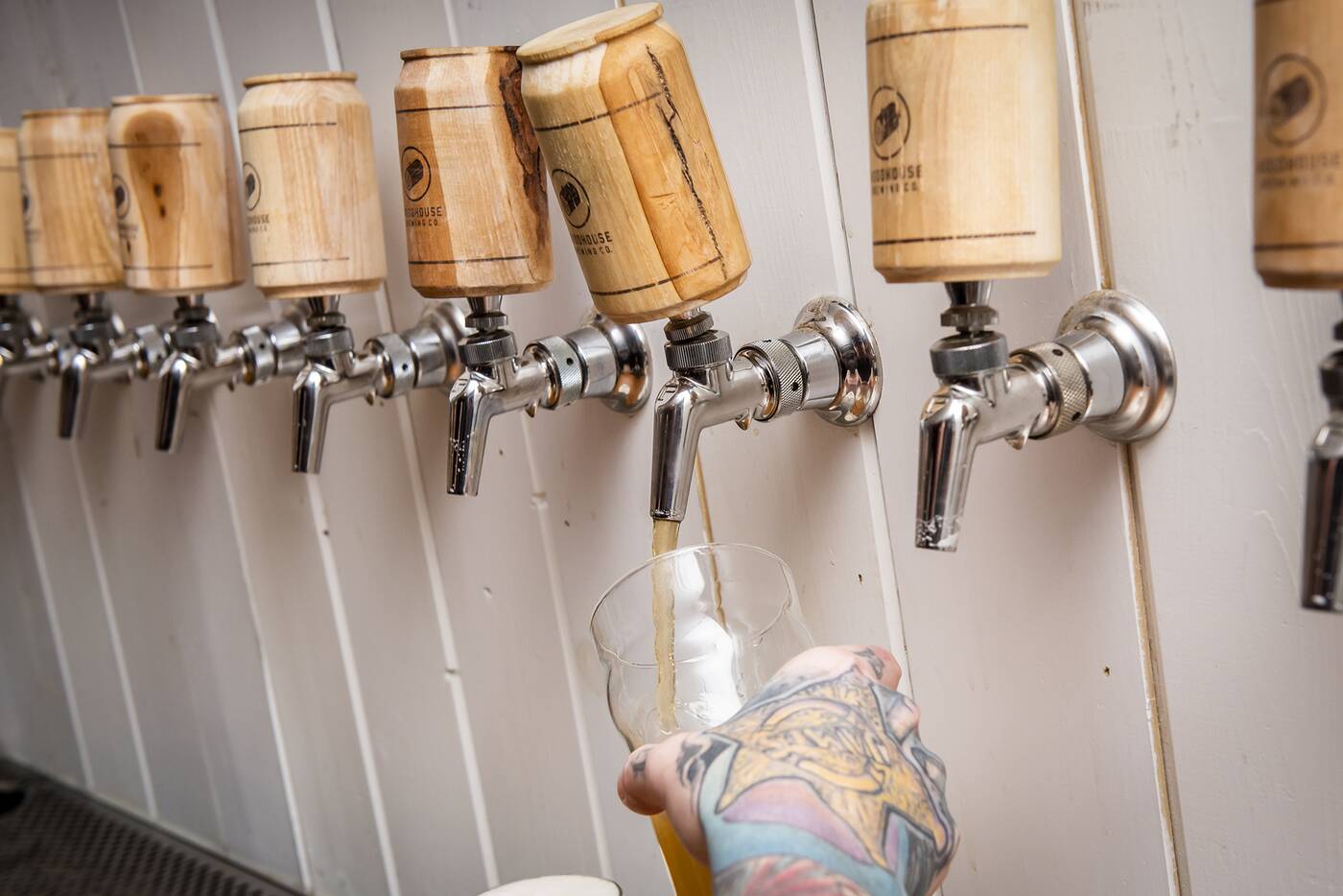 Eight beers on draught for $7.25 for a 16-ounce pour are all from Woodhouse. 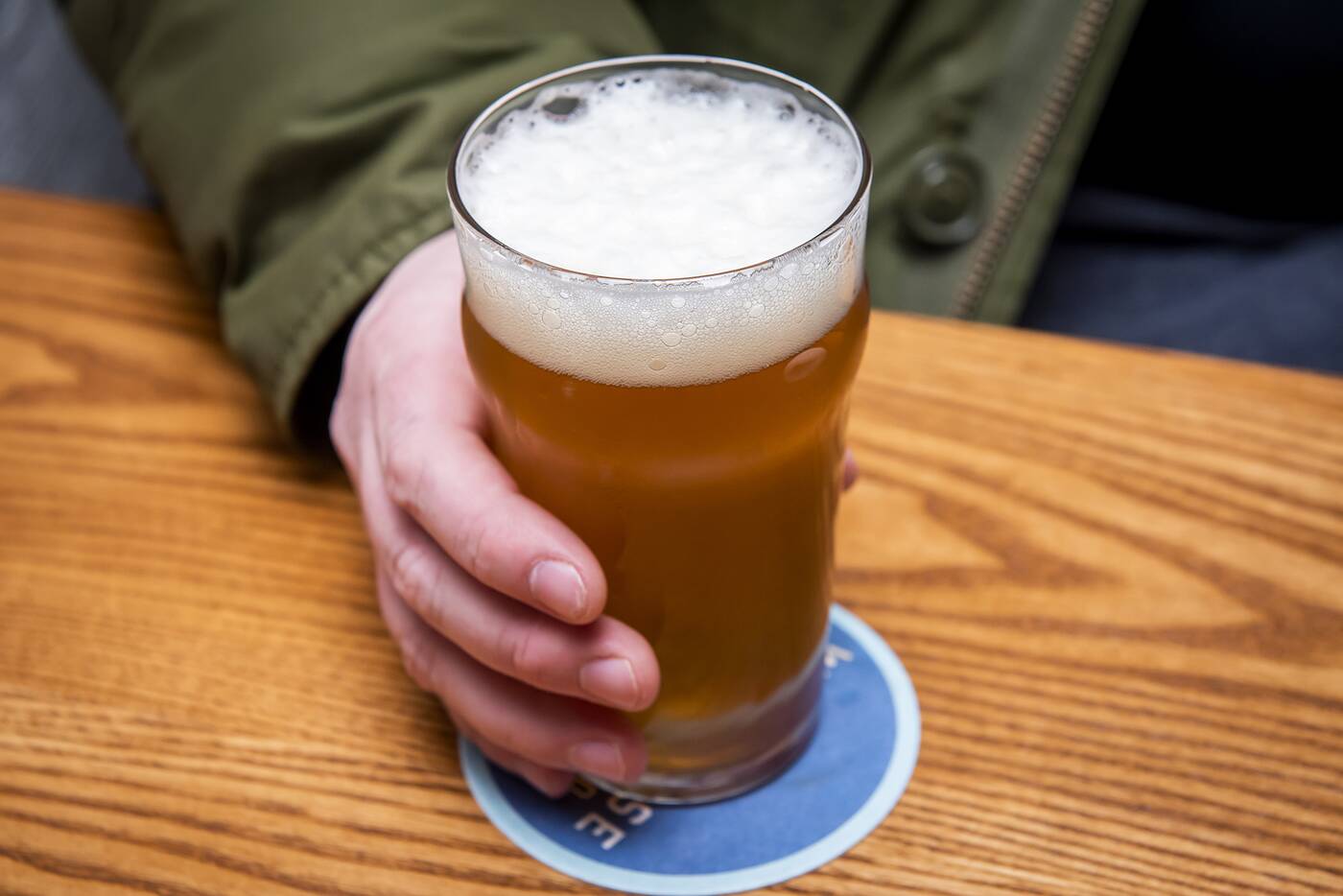 This includes their standard lineup of beers available at the LCBO: a stout, lager, IPA, light and APA. 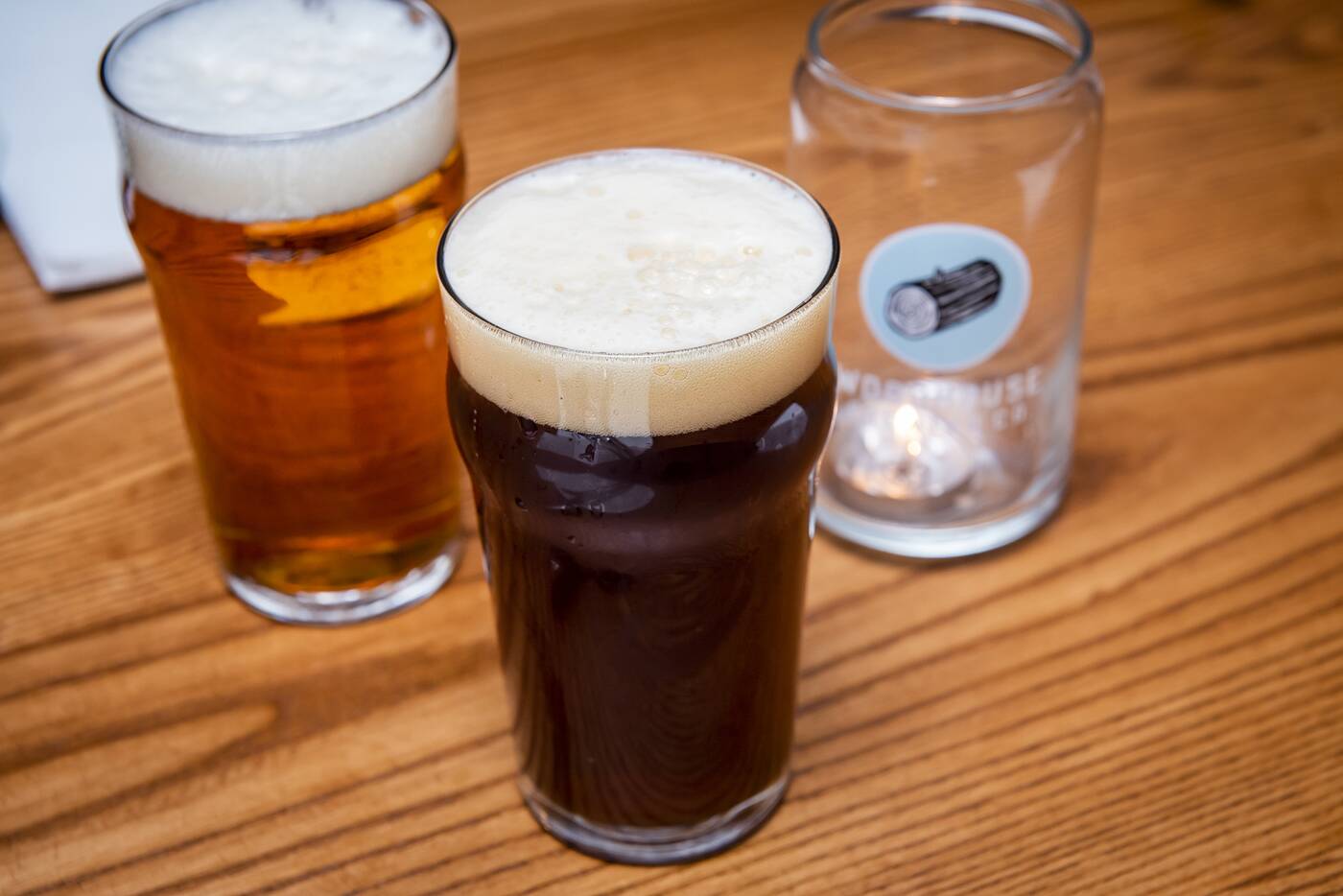 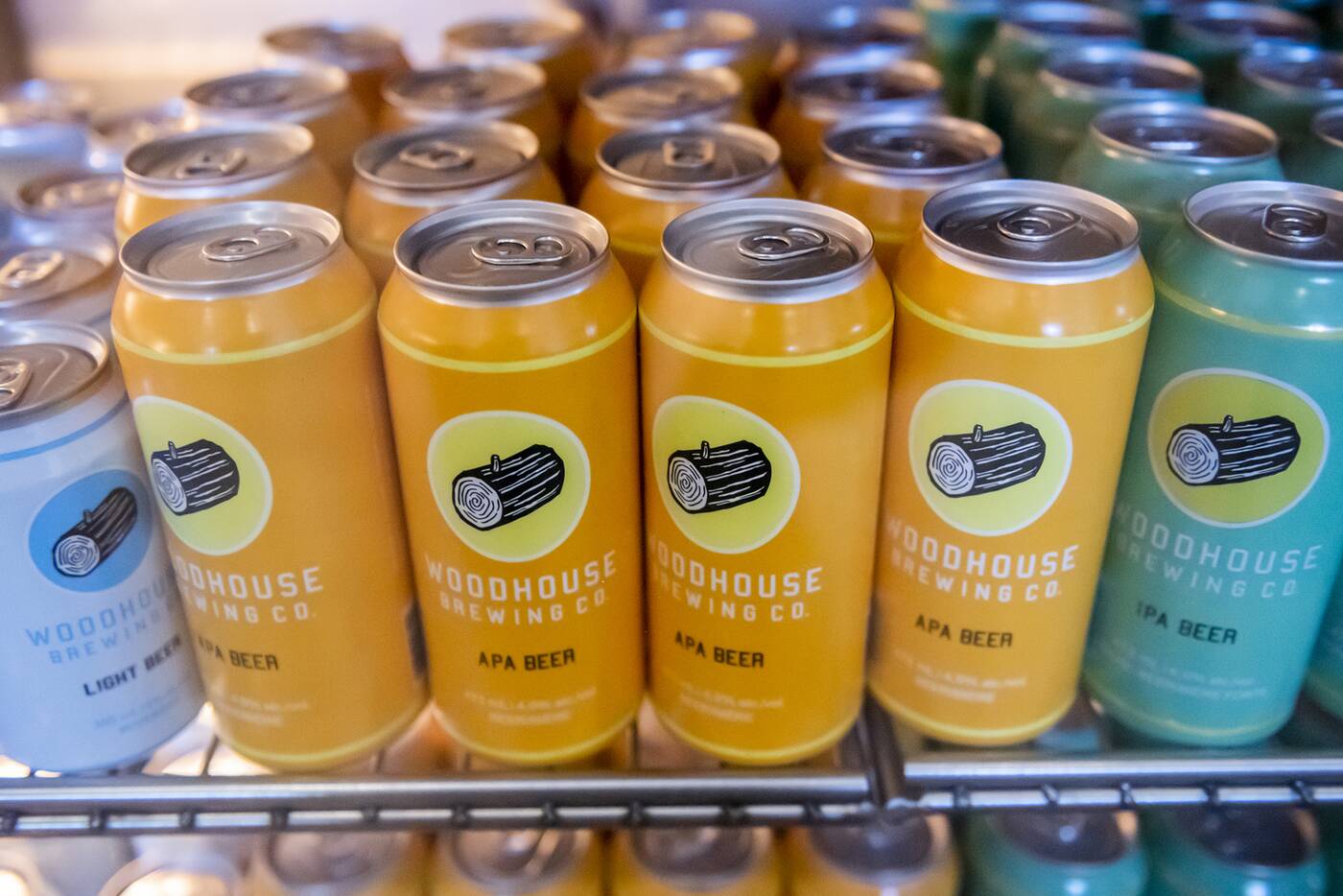 Merch and cans are available to take home. 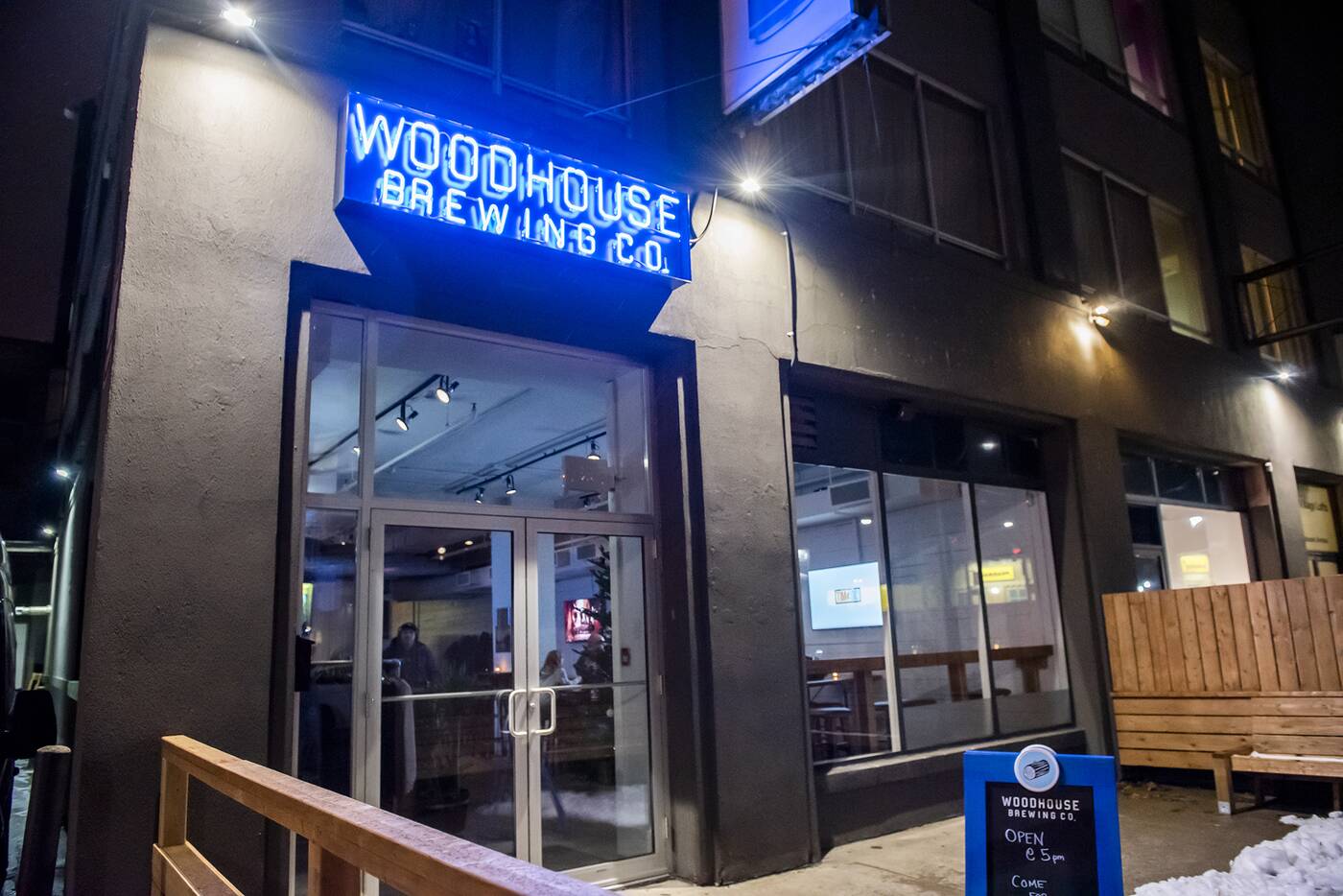