The 15 most fun bars in Toronto

The most fun bars in Toronto are a blast, not only because you're slowly getting drunker and drunker, but also because these places have forms of entertainment beyond the regular libations.

Here are my picks for the most fun bars in Toronto.

After moving from their original location in the Annex, the city's favourite arcade bar is back in action on Dundas West with an even bigger space. Games are totally free, once you pay the $5 cover.

The retro bar on the Danforth is choc full of VHS tapes, retro arcade cabinets and video game consoles. They also have two reto movies playing on the screens at the same time.

Cocktails and obscure games are what's happening at this Little Italy bar. There are three tabletop games that are great for drinking games, plus Japanese billiards, Cornhole and a giant version of Rebound.

This Riverside bar is home to a highly-inventive new game called lob that combines bocce with elements of golf. Drink and get competitive with your buds.

Play ping pong at this underground King West spot in a 12,000 square-foot-space with 12 tables, and two bars with drinks which you unfortunately can not play beer pong with. 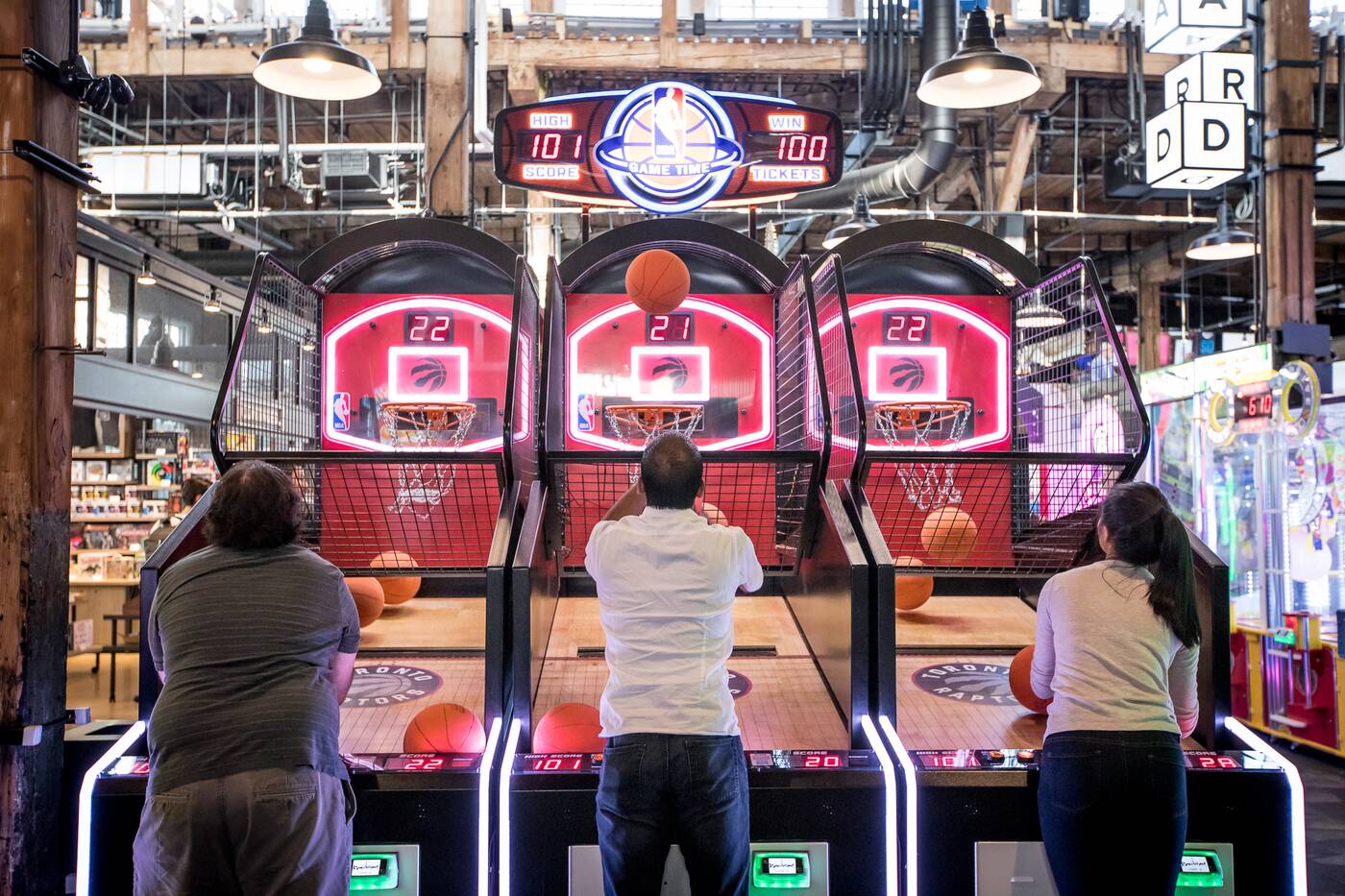 Grab a drink and test out of your basketball skills at The Rec Room. Photo by Jesse Milns.

Canada's so-called 'nerdiest bar' on Church Street shows old episodes of Game of Thrones on the big screen. The place is also full of board games to play.

While not solely a bowling alley, the lanes are definitely the draw of this huge bar in the Entertainment District. They also have ping pong tables on the second floor and giant TVs to watch the game in between turns.

Mechanical bull—enough said. This Entertainment District bar will make you feel like you're drinking in a saloon, with a cowboy-themed menu and barstools made of real horseback saddles.

Pair some very strong cocktails named after Toronto's streets with arcade games in a space that's decked out with cool murals. They also have occasional live music as the soundtrack of you getting slowly drunk off their boozy signature floats.

This massive playground by the Rogers Centre has nearly a hundred arcade games to crazy in, lots of cocktails, and wine and beer on tap. It's still a classy spot filled with blinking lights; upstairs on the patio you'll find an amazing view of the CN Tower. 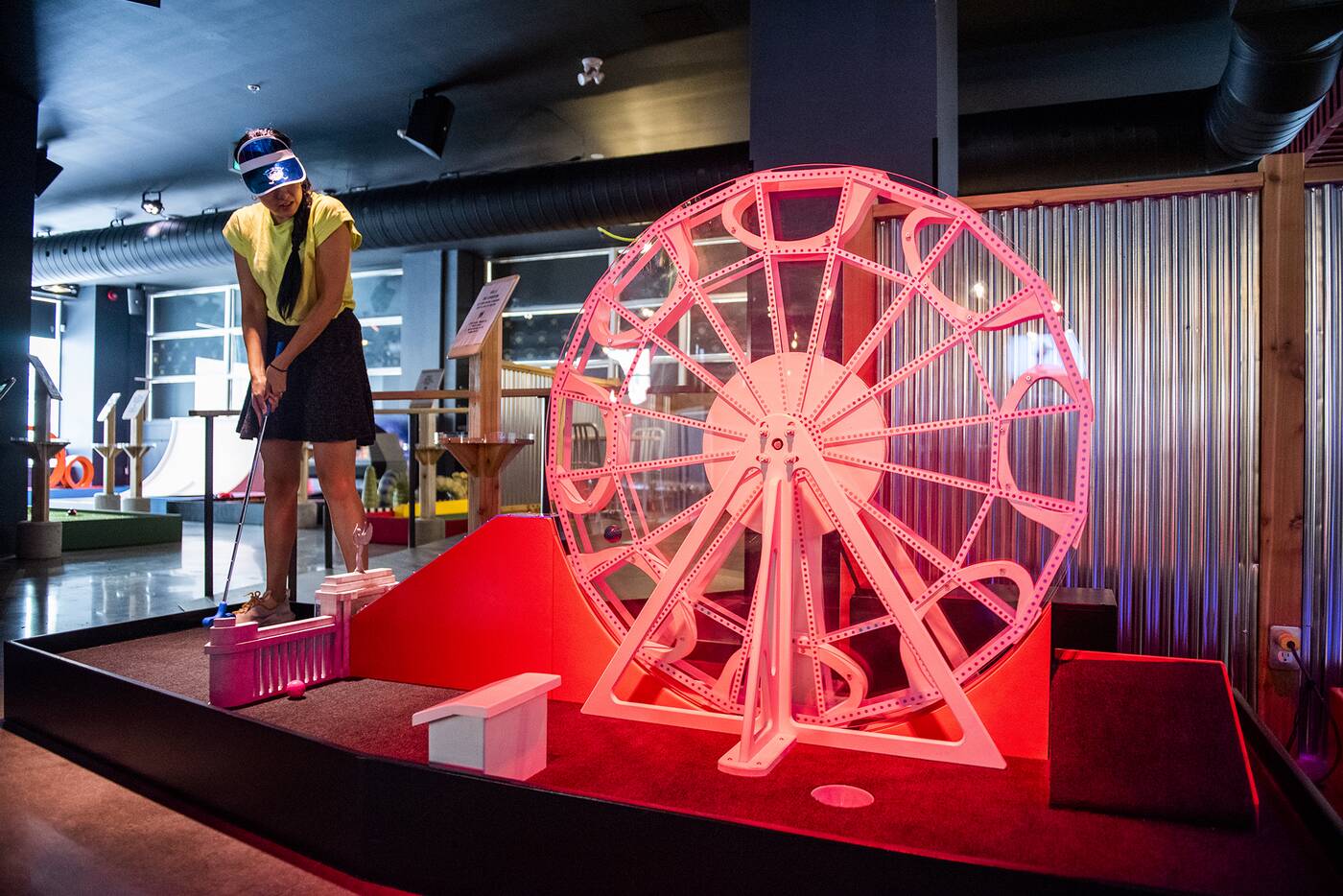 Par-Tee Putt is anything but your average mini golf course. Photo by Hector Vasquez.

This Danforth bar is the more intimate, slightly more mature counterpart to Tilt. Similar to Tilt, there's $5 cover for free play on all retro console and arcade games.

The Little India spot is preserving a piece of Toronto history in the form of a five-pin bowling alley. It's housed in a building that was finished in 1947 and comes complete with all the original seating, ball racks, lanes and scoring tables. There's also a restaurant, billiards and mini arcade.

Here's an indoor mini putt golf course in the heart of the Entertainment District. There's three whole courses crammed in here, co-existing with two designated areas where you can dine on pizzas and beer. What more could you want?

Under the Walrus Pub, you'll discover a slightly more rowdy beer hall revolving around a central area with ping pong tables. Ping pong tables can be rented for a minimum of an hour, half an hour during off-peak times.

Hector Vasquez at Mom's Basement. With files from Tanya Mok and Jaclyn Skrobacky.