Track & Field is a lively, party bar where you can play large-scale lawn games while drinking a few cocktails.

The bar is one of the first places in Toronto to offer lawn games, traditionally played outside, in an inside space.

Their original location was in the basement of 860 College Street, but in 2018, the building was sold, and the owners began seeking a larger space to host their beloved lawn games. 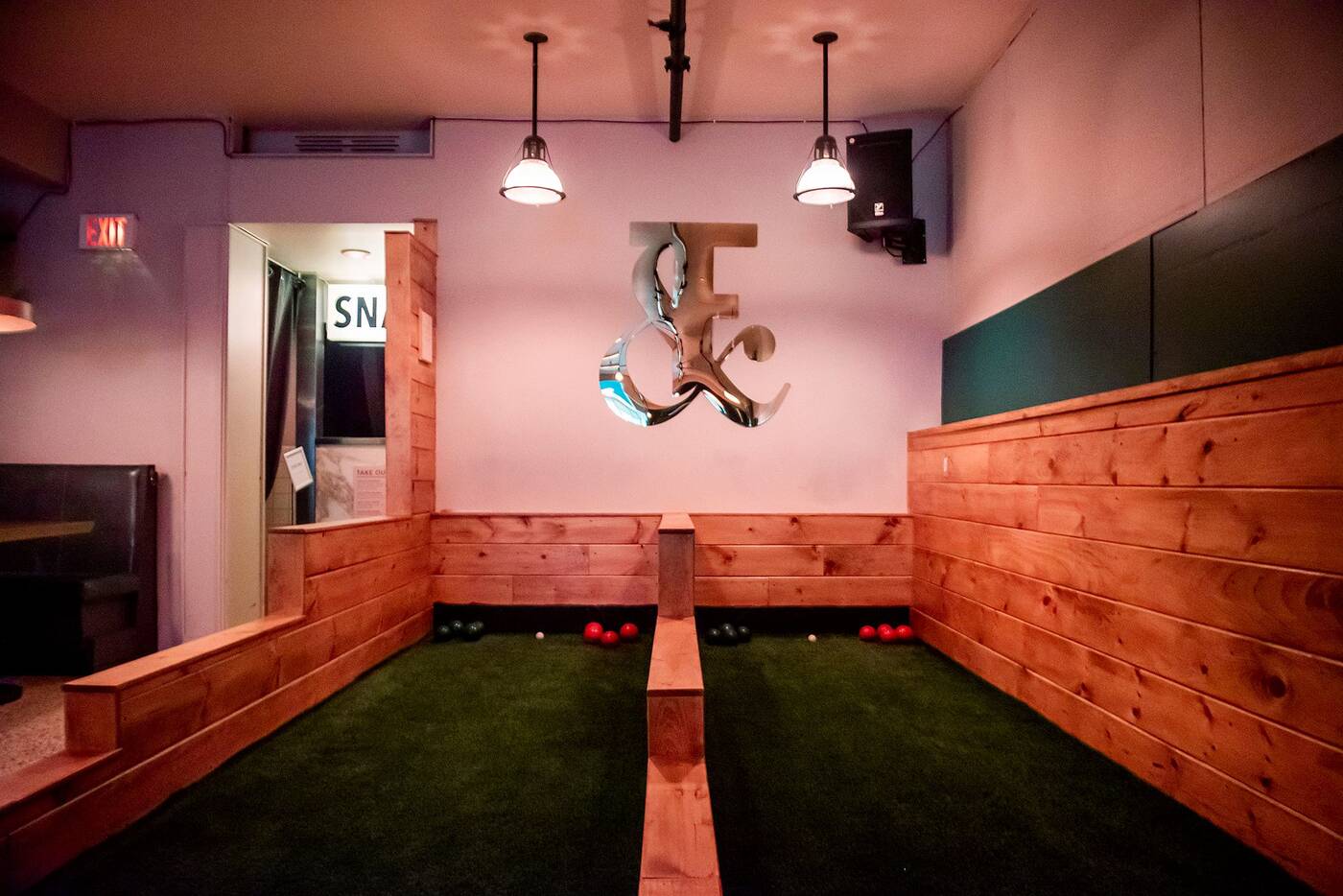 After a two-year hiatus, they've opened up a new location, right down the street, at 582 College Street in Little Italy. It's in a space that's had lots of turnover with previous tenants including The Peacock Public House, Mad Crush Wine Bar and Bar Italia.

The new space was designed and built by owners Nickie Minshall, Jesse Borg, and Tasha Potter (who also own Bangarang on the same street). 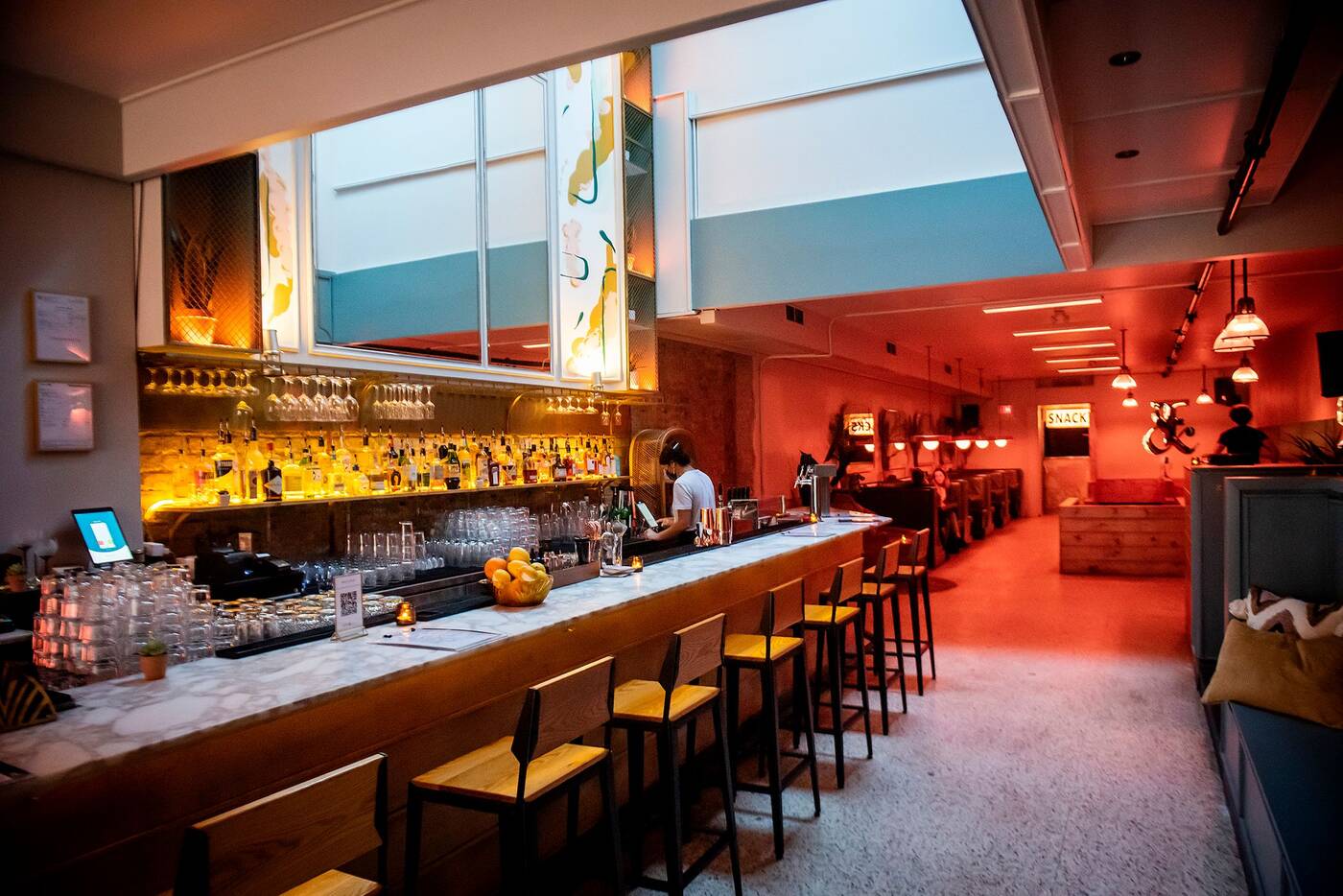 It's definitely an upgrade from the old Track & Field and now sports a much more feminine aesthetic to the overall look, versus the dark, dive bar it once was. 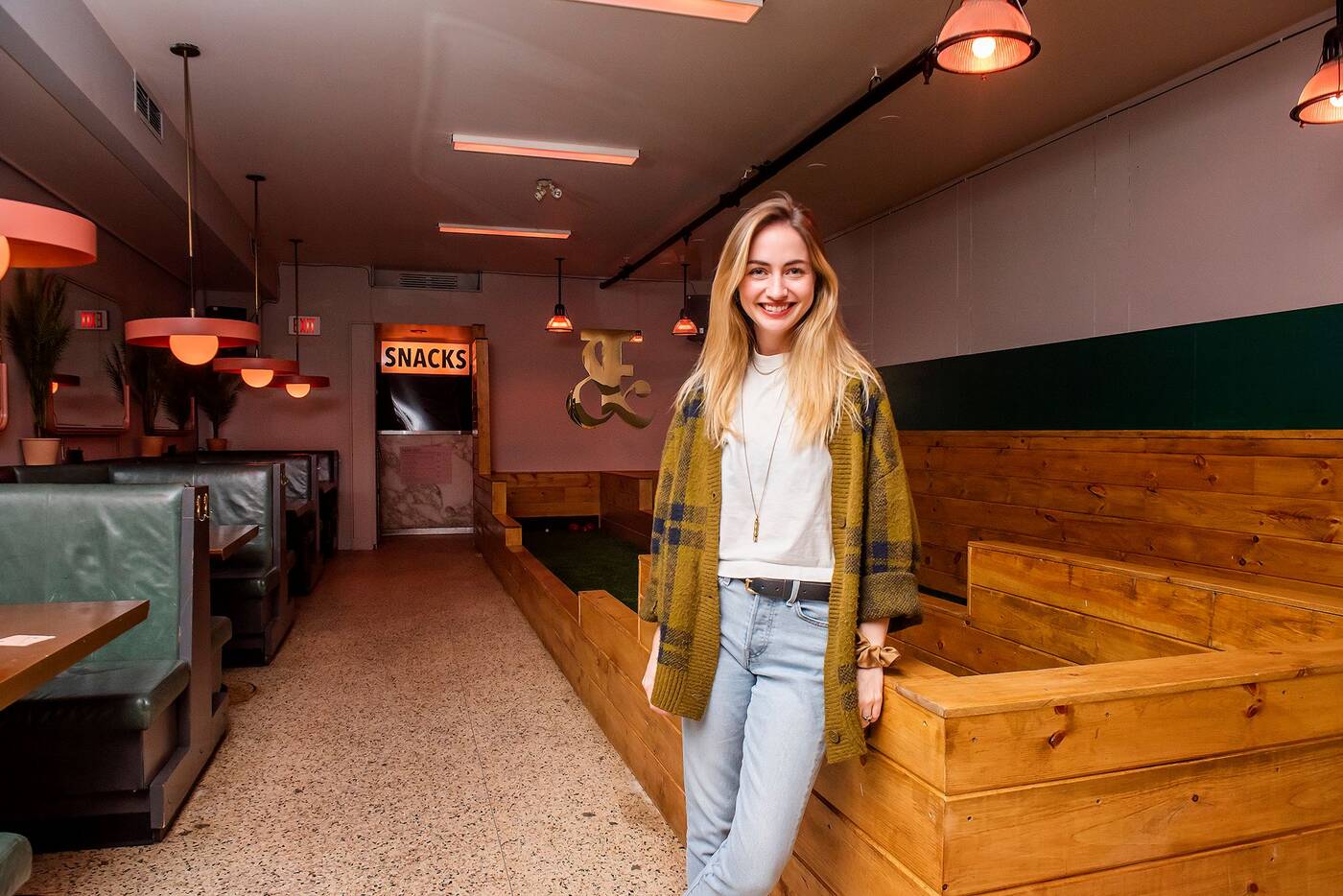 Minshall says she was only 24-years-old when she co-owned the old Track & Field.

She believes both her and the regulars have grown into their late twenties together and needed a fresh, more mature space to continue the Track & Field legacy. 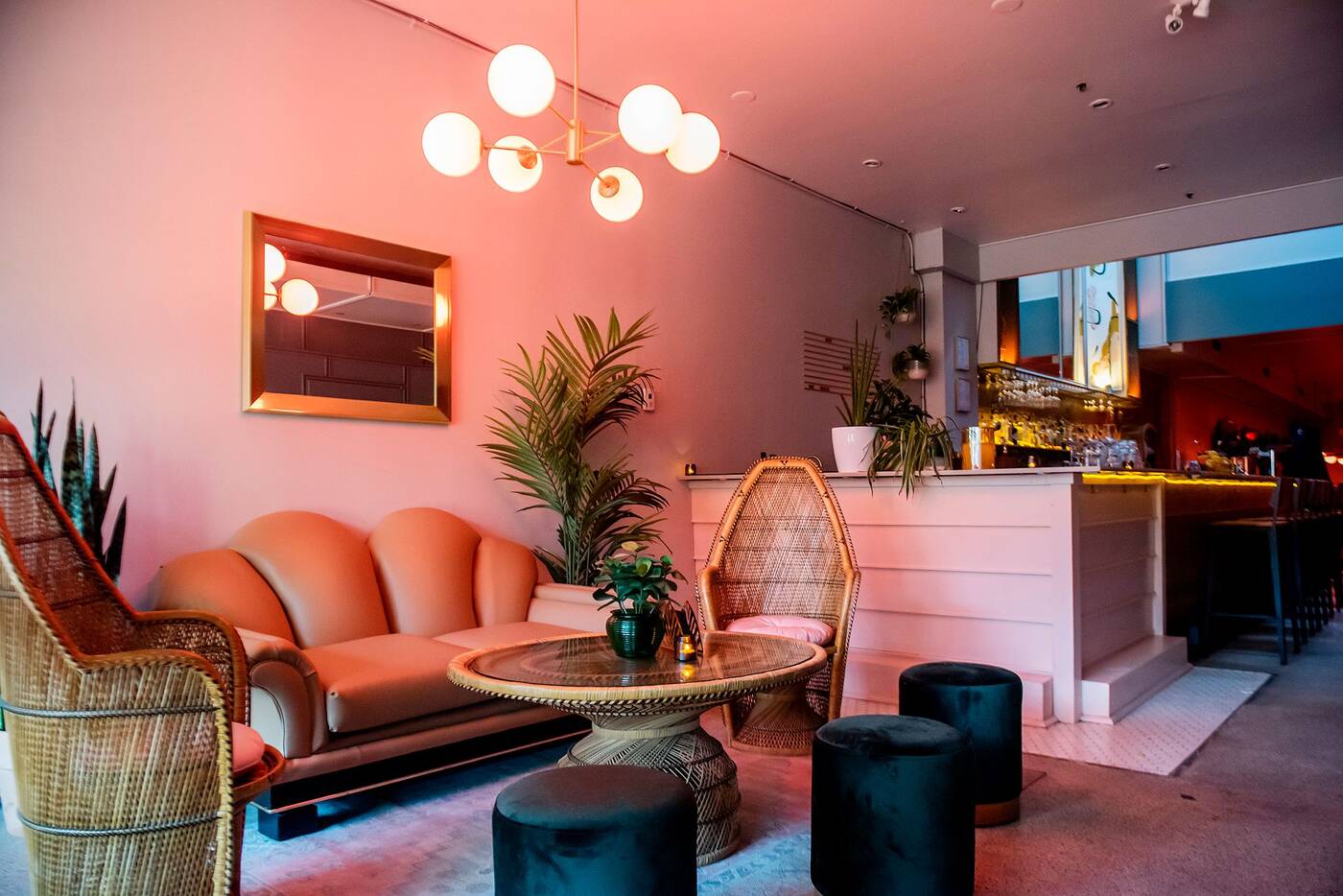 Walking inside, you immediately get a retro feel for all the vintage couches, mirrors and lounge chairs that differ in shades of pink, gold and hints of velvet. 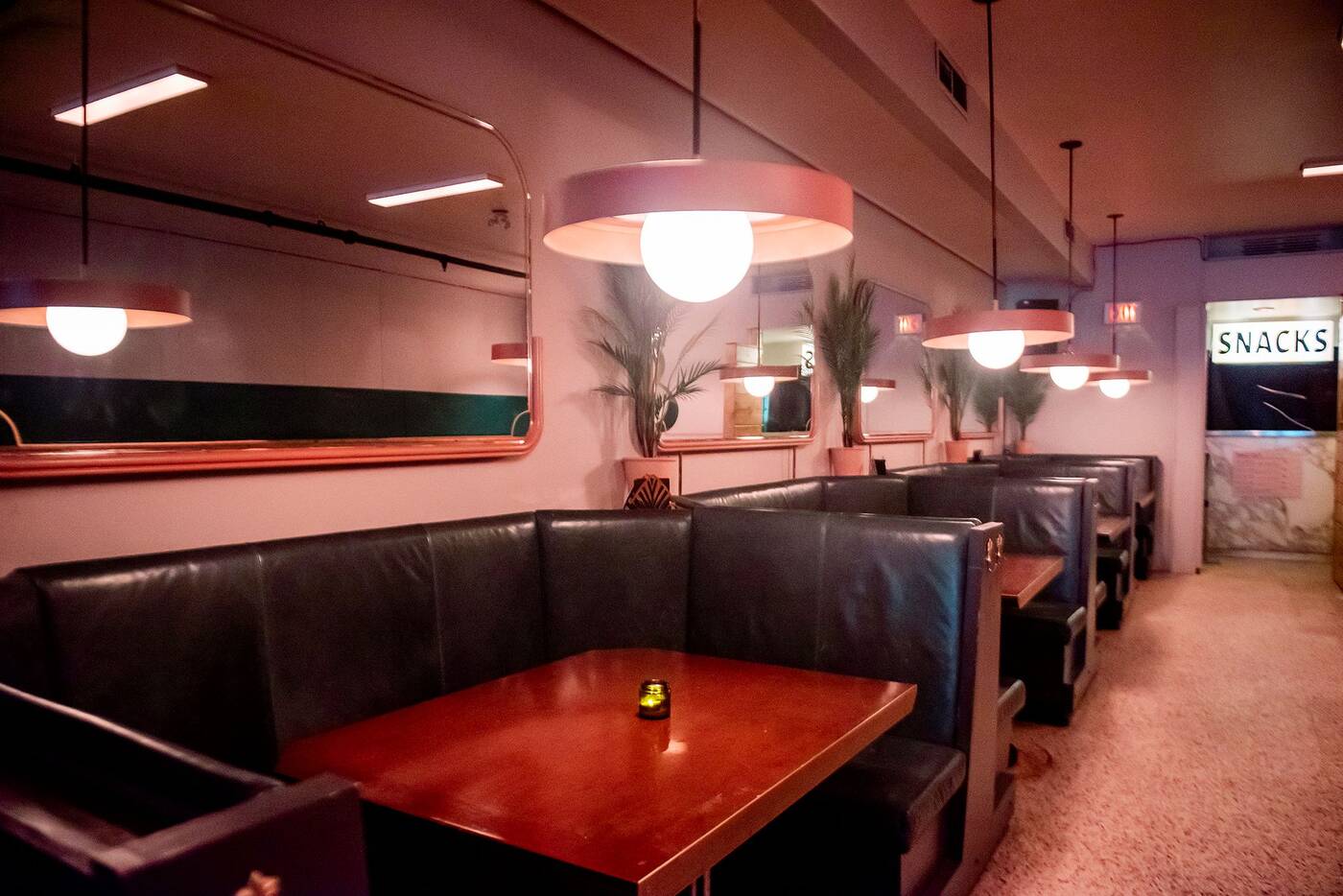 This complements well with the evergreen booths that line the left side of the bar, two lanes of bocce ball have been built beside this. You can rent one of the lanes for $40 an hour, or free of charge for walk-ins.

Towards the back of the bar is a snack window, there are QR codes located on walls around the bar, that you can use to order your food, you'll be notified when your food is ready and you can walk up to the window to pick it up. 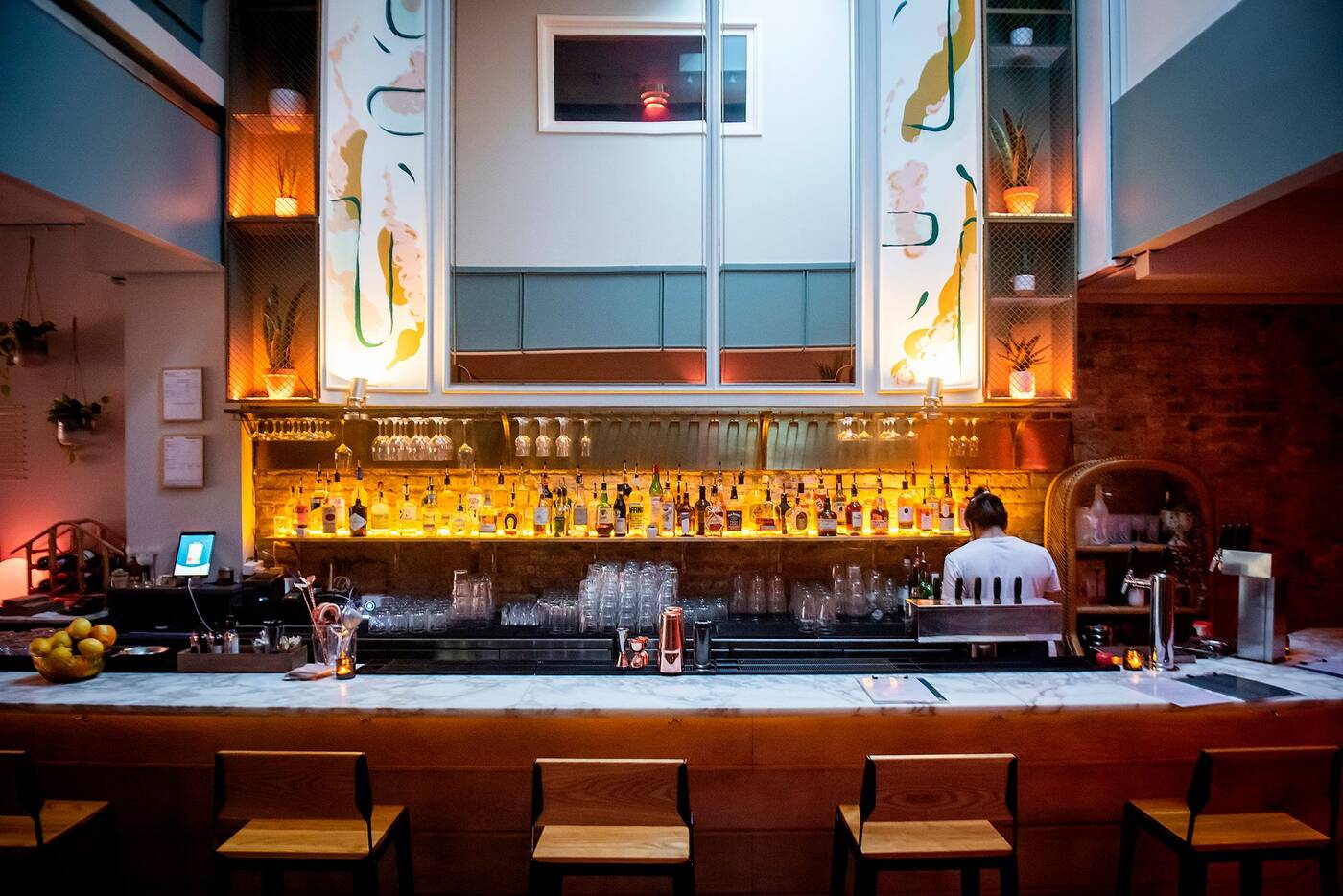 A skylight window sits on the cieling above the bar, creating a glowy effect for the rest of the lounge, where racks of plants and dainty cocktail glasses are shelved. 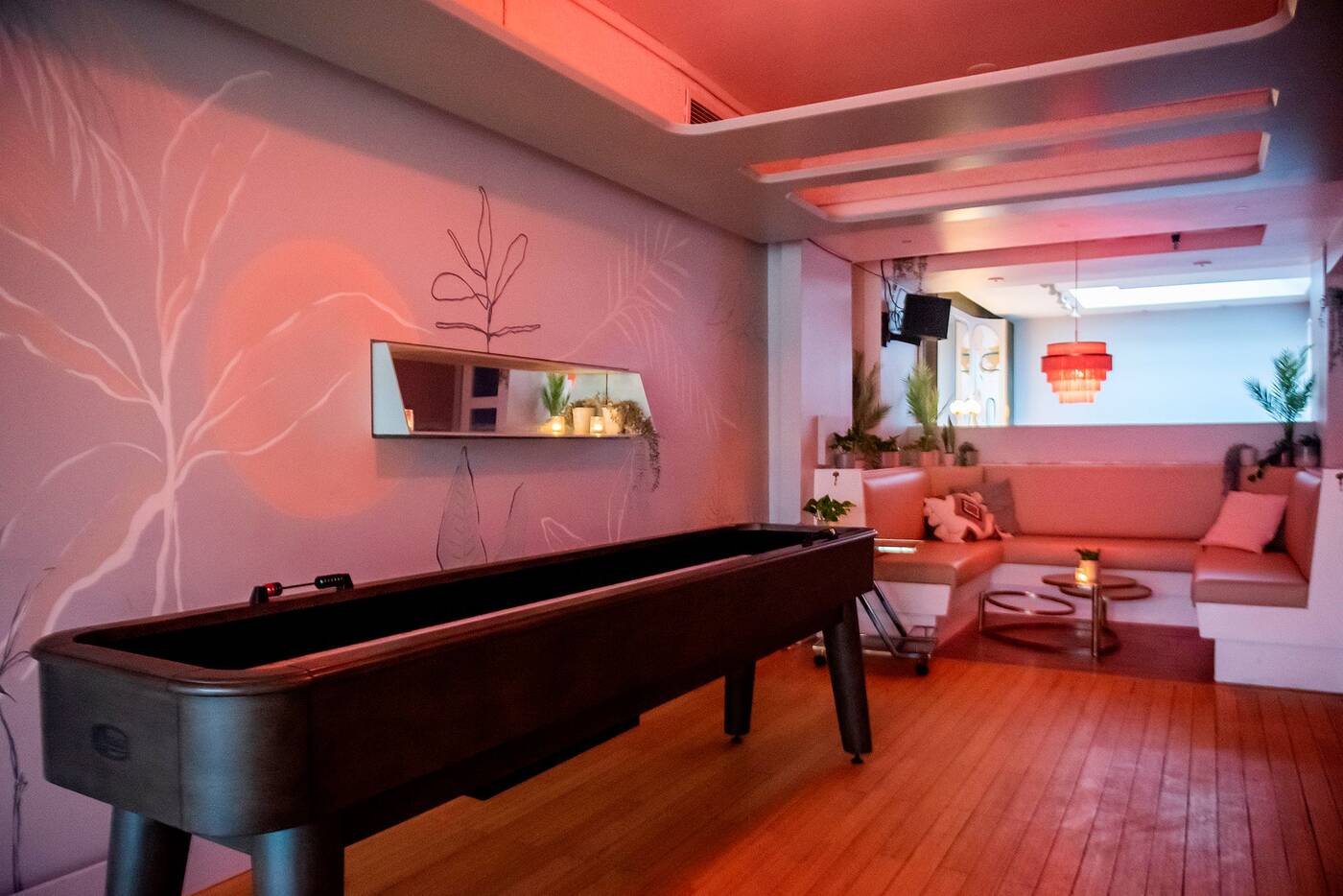 The building has a second floor space, called The Palms, and can be used for private events being hosted at the bar. It maintains the same dreamy vibe, with a game of shuffle board and Ringo included in the lounge, both free of charge to use. 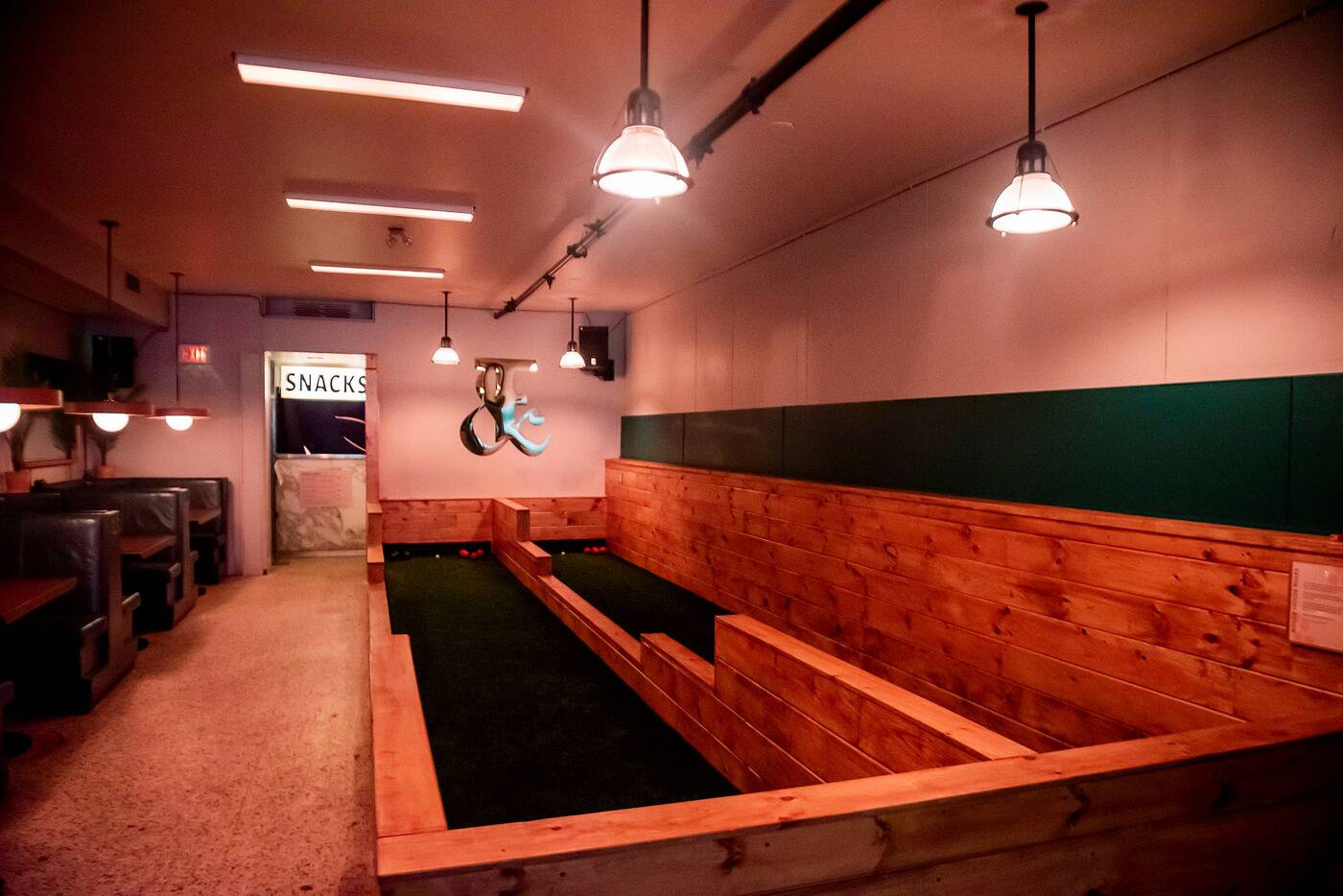 Track & Field would be a great spot to visit when meeting with friends or a date who you're not too familiar with.

Unlike regular bars, you won't need to worry about the first hour of awkward conversation, because you can automatically have something to talk about while playing games.

Most of the games at Track & Field can be conveniently played with one hand, so you can hold your drink in the other. 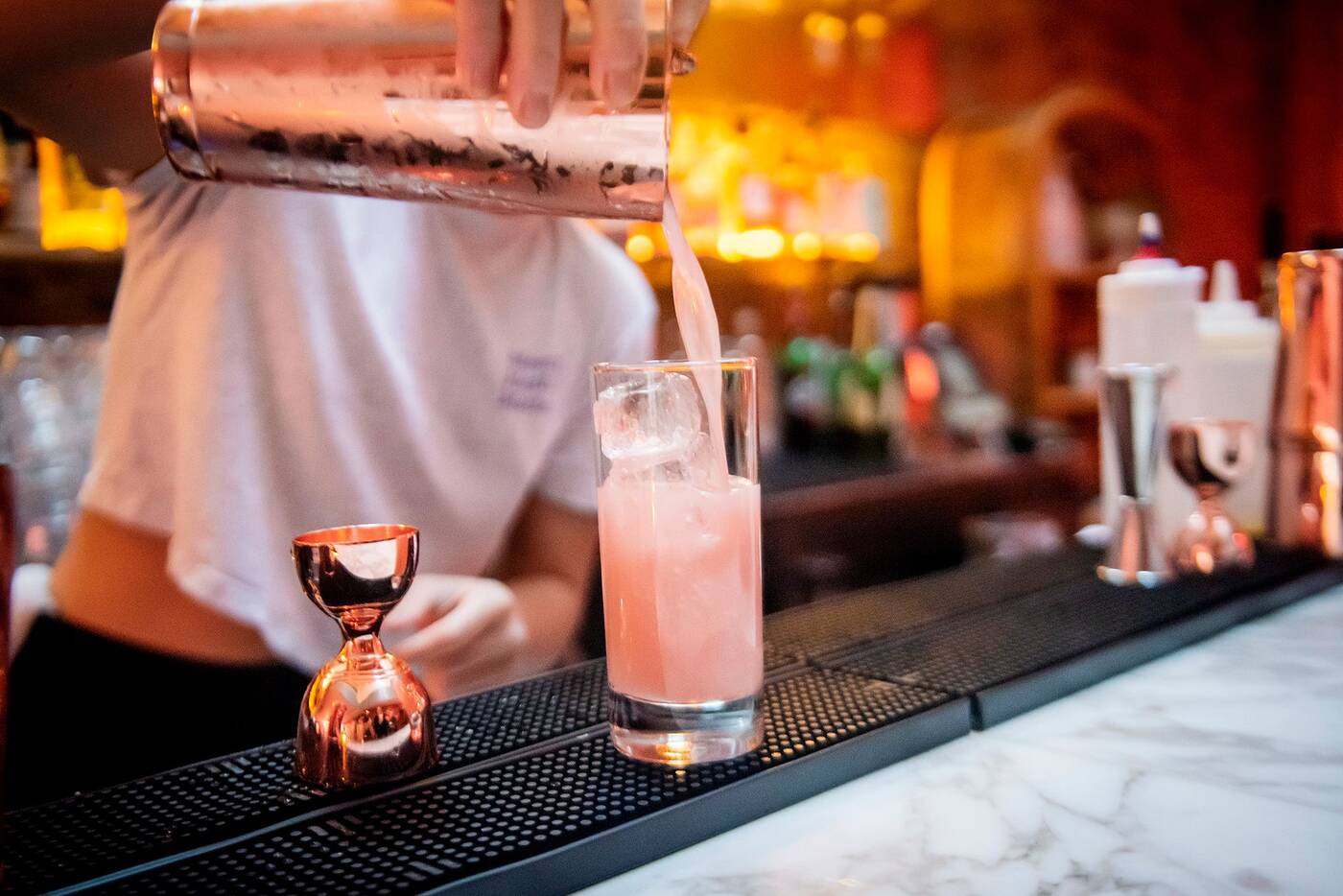 The Certified Hover Boy ($15.00) is a new drink added to the cocktail menu, as inspired by Drake's most recent album. 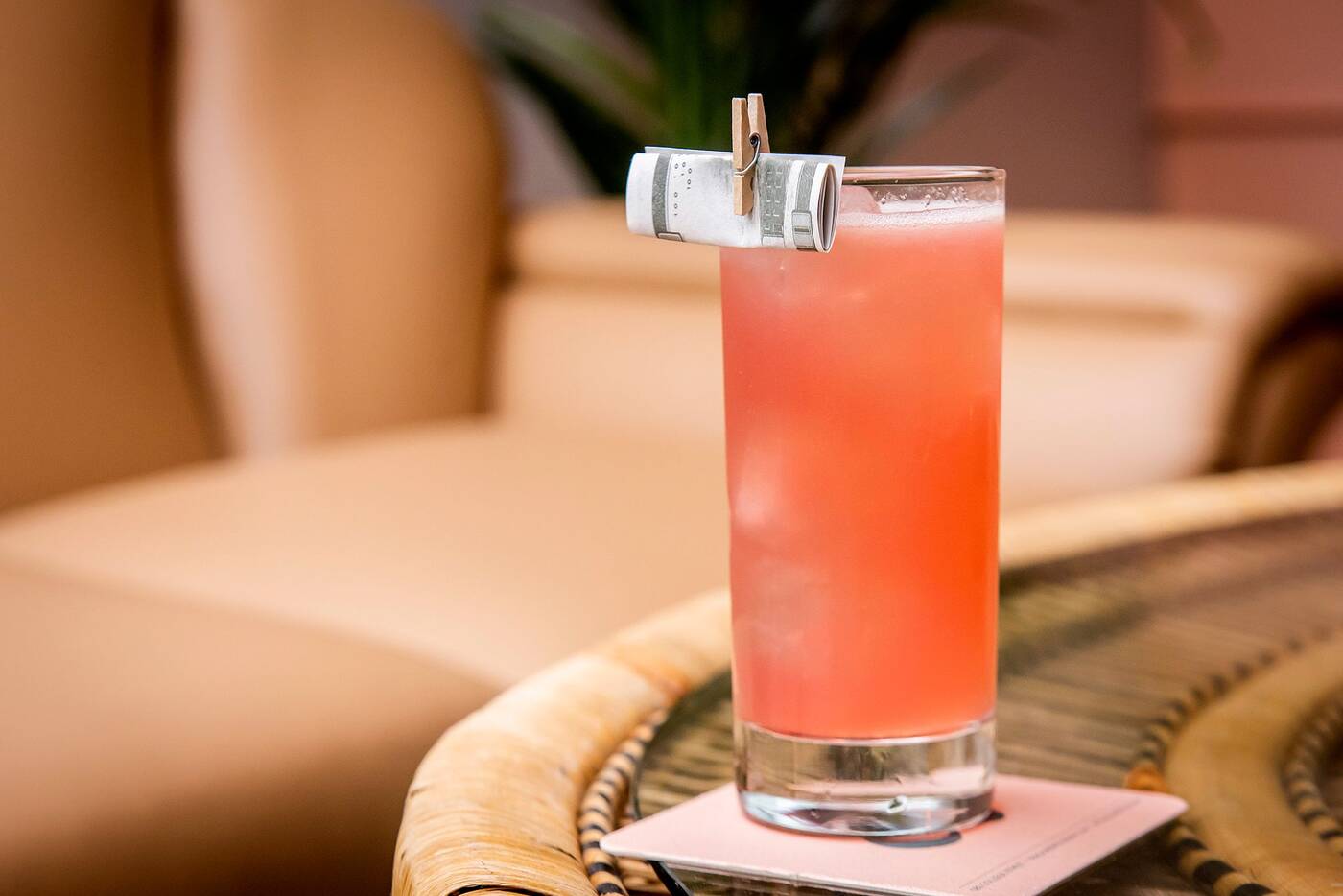 0.75 ounces of Hornitos Plata Tequila is combined with the same amount of Verde Momento Mezcal, and 0.5 ounces of Martini Fiero. Splashes of lime juice get added, along with 0.5 ounces of peach-flavoured syrup and topped with Matron's Janky IPA.

The best part about this drink is the $100 bill that's used as a garnish, making it a definite crowd favourite. 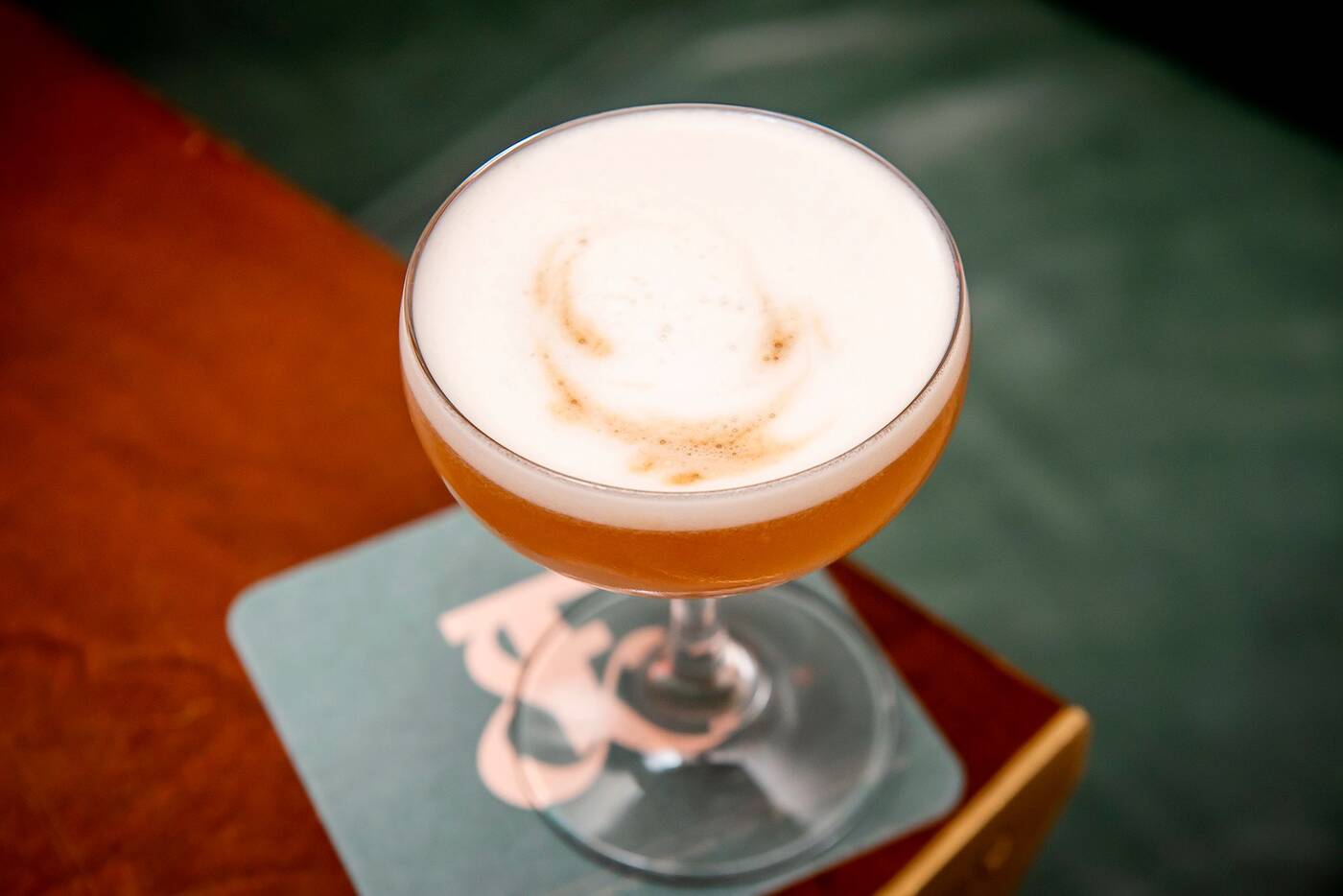 The Chai Town ($15.00) is like a pumpkin-spiced whisky sour. Two ounces Maker's Mark bourbon is combined with lemon and 0.5 ounces of pumpkin-chai syrup. This all gets shaken with eggs whites, creating a foamy top layer, then a finishing touch of bitters. 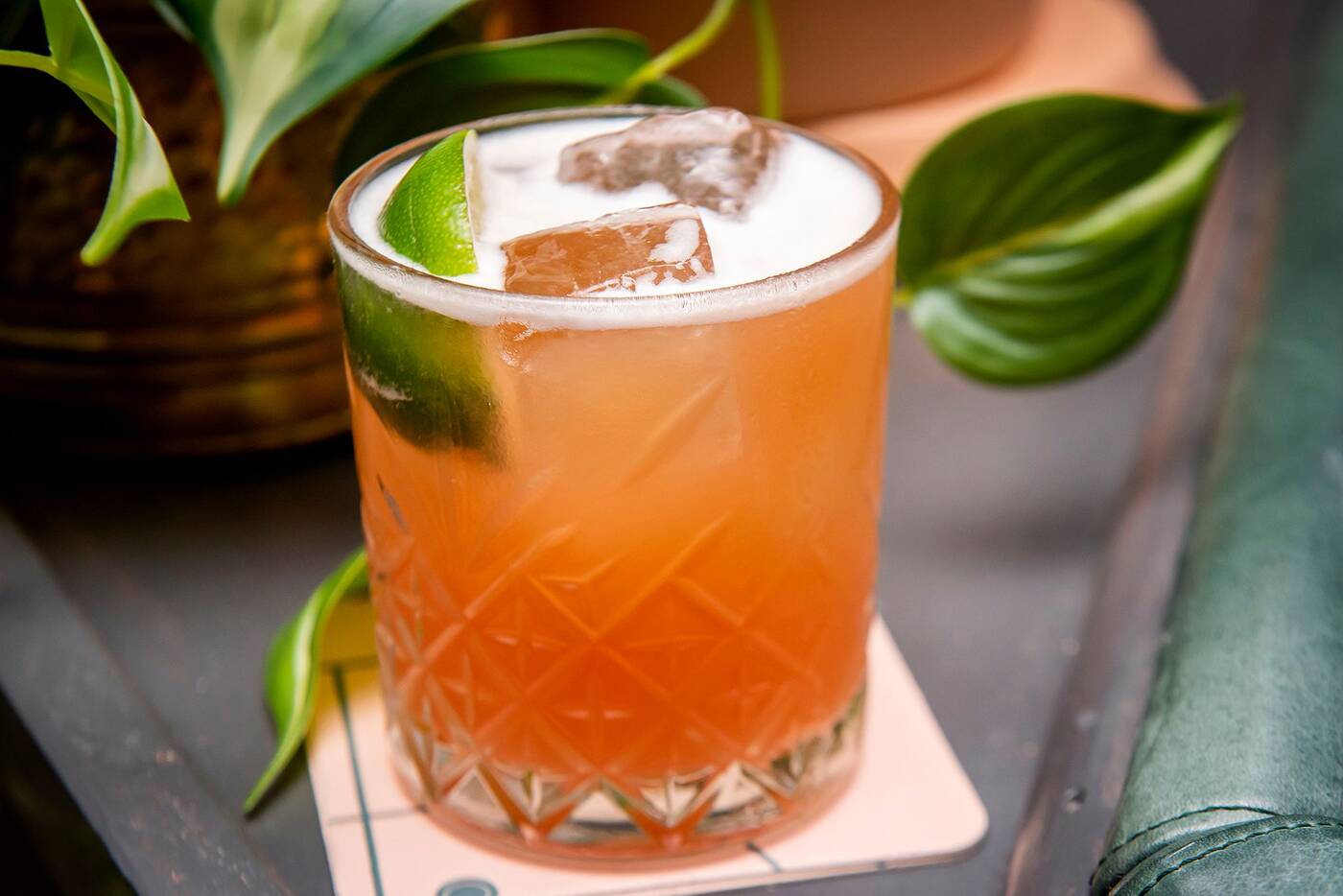 The Old Kanye ($15.00) was taken over from the old menu, it tastes like a tropical beach inside of a drink. 0.75 ounces of Havana Club 3 Year and Appleton rums are shaken with lime and 1.5 ounches of pineapple juice. 0.5 ounces of Campari Aperitivo is added, on top of 0.5 ounces of coconut/cocoa syrup.

All the food at Track & Field is prepared through a collaboration with Fidel Gastro's, now based out of Etobicoke. 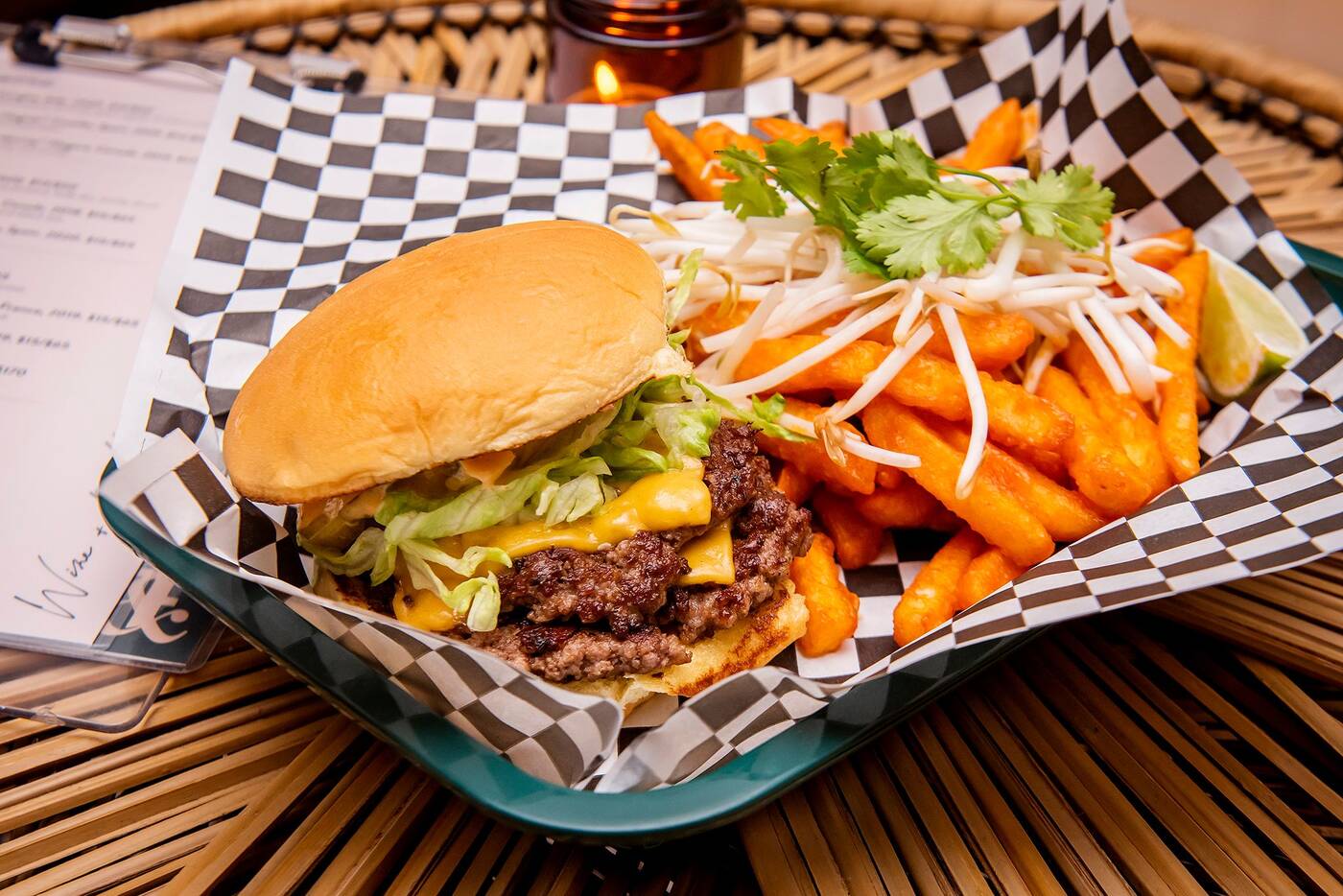 The Smash Burger ($12.00) has two house-ground beef patties, wrapped inside of a potato bun, and layered with two slices of american cheese. Shaved lettuce, onion, pickles, and special sauce, tops the rest of the burger.

The Pad Thai Fries ($8.00) taste as if you're biting into a plate of the classic noodle dish. Hand-cut fries are tossed in a pad thai sauce, it's then topped with bean sprouts, cilantro and a drizzle of lime. 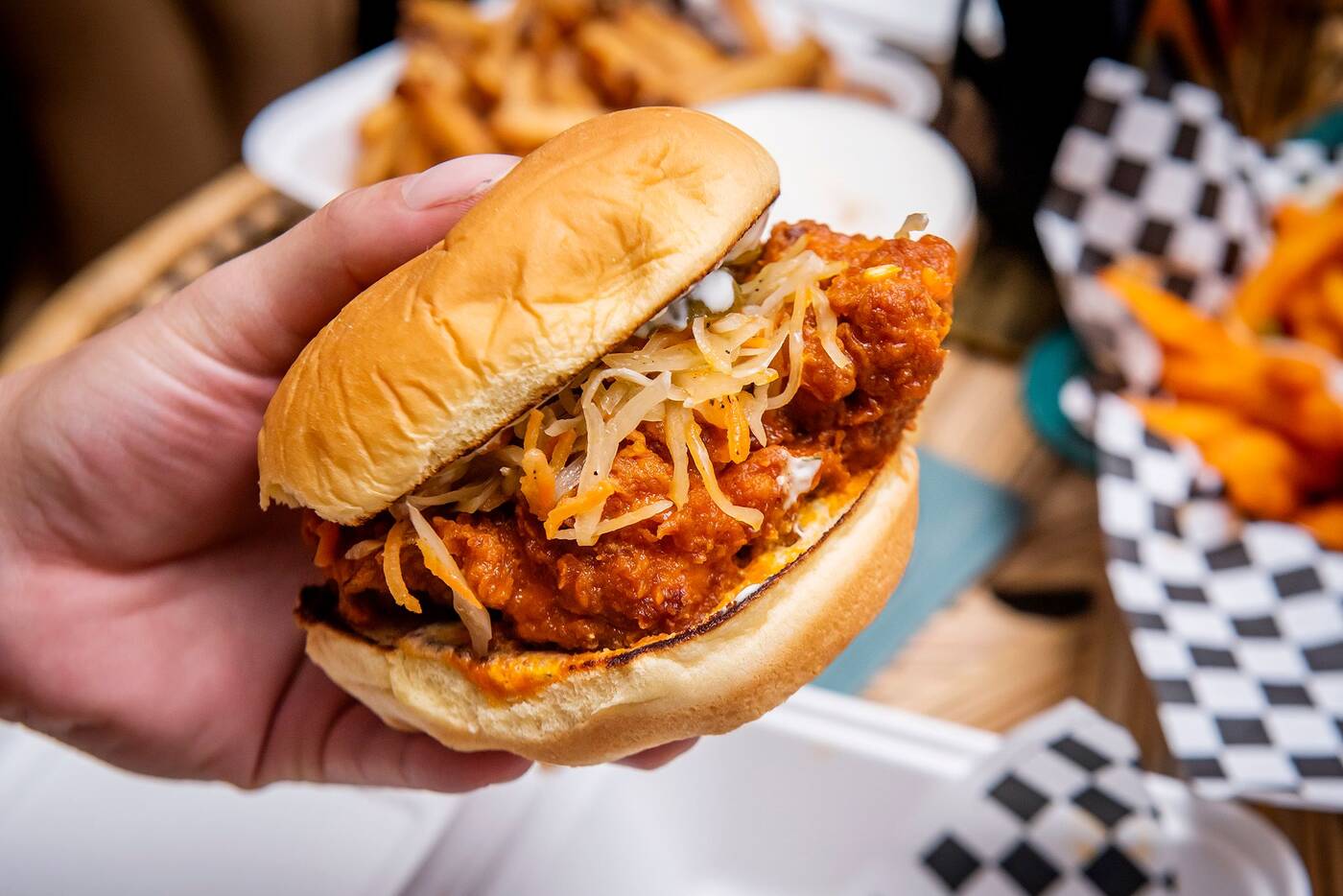 The Chicken Sammy ($14.00) has a chicken thigh that's coated in buttermilk before getting fried. It's then tossed in a buffalo butter sauce, with lettuce, pickles, a vinegar slaw and ranch sauce to finish it off. 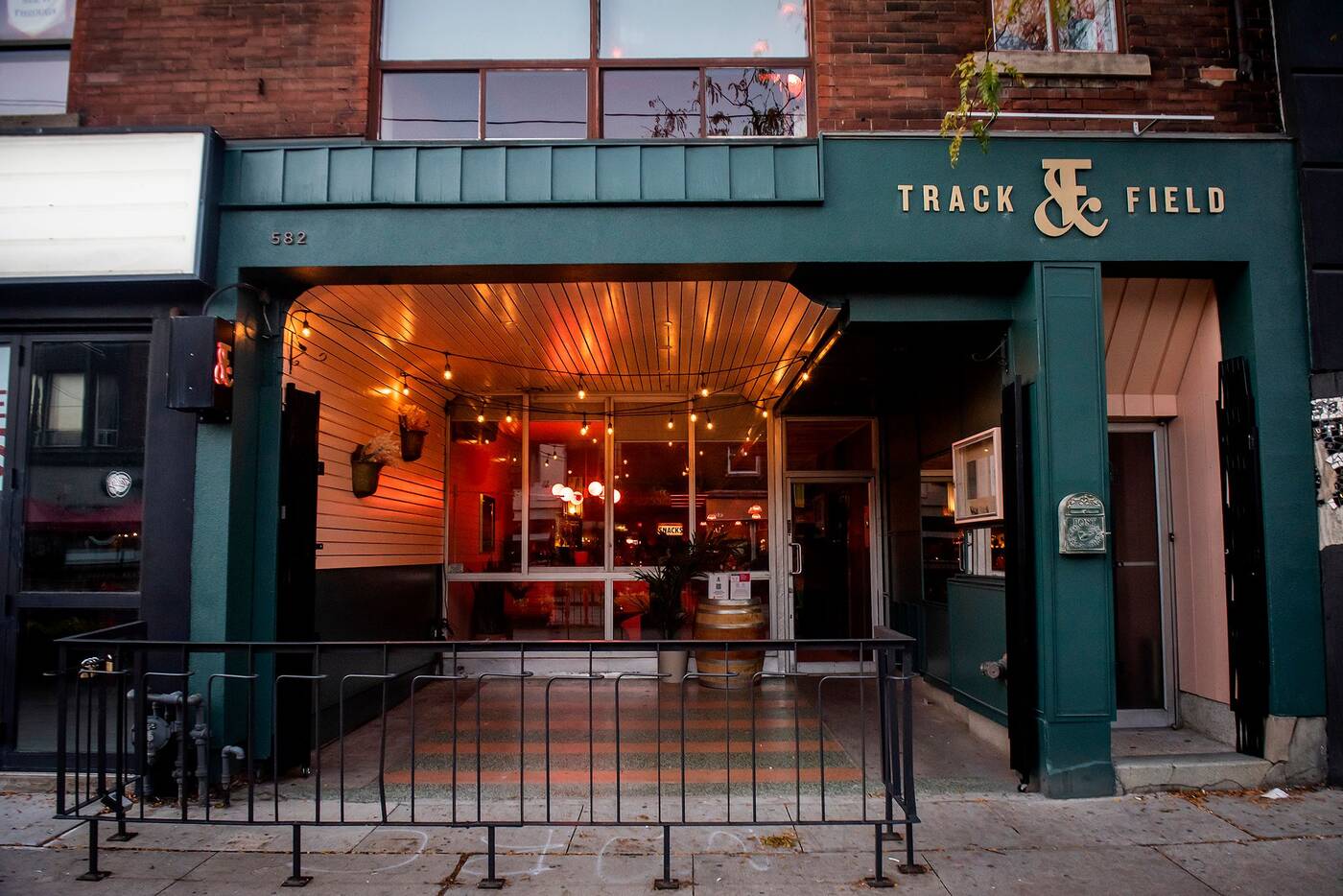 The signature logo of Track and Field is embellished on the exterior of their new location, a warm glow from the inside peeks out of the front entrance of the bar, right near the intersection of College and Clinton Streets.