LOB is simultaneously a bar, a restaurant, and home to a highly inventive new game, eponymously called lob, that combines bocce with elements of golf.

The brainchild of avid bocce player Ryan Dolan, LOB is definitely not your traditional game space. Inspired by the Brooklyn-based bocce field Union Hall coupled with some more backyardsy elements, it's a welcome addition for fun group gatherings in the east end. 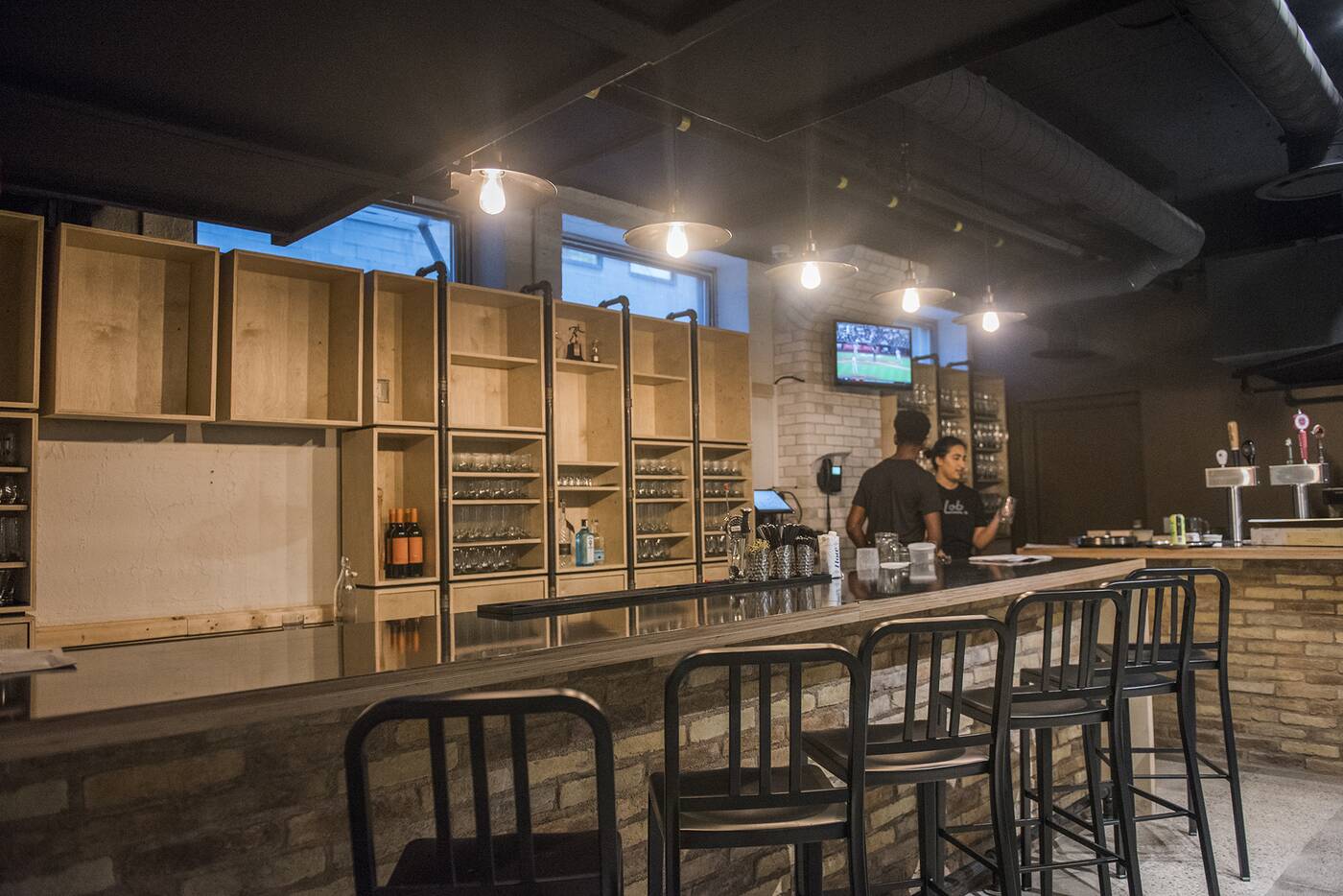 The bar's entrance is located midway along an alleyway with stairs leading down to the 10,700-square-foot space. Despite being so large, the subterraneous spot is really cozy, with low ceilings and dim lighting. 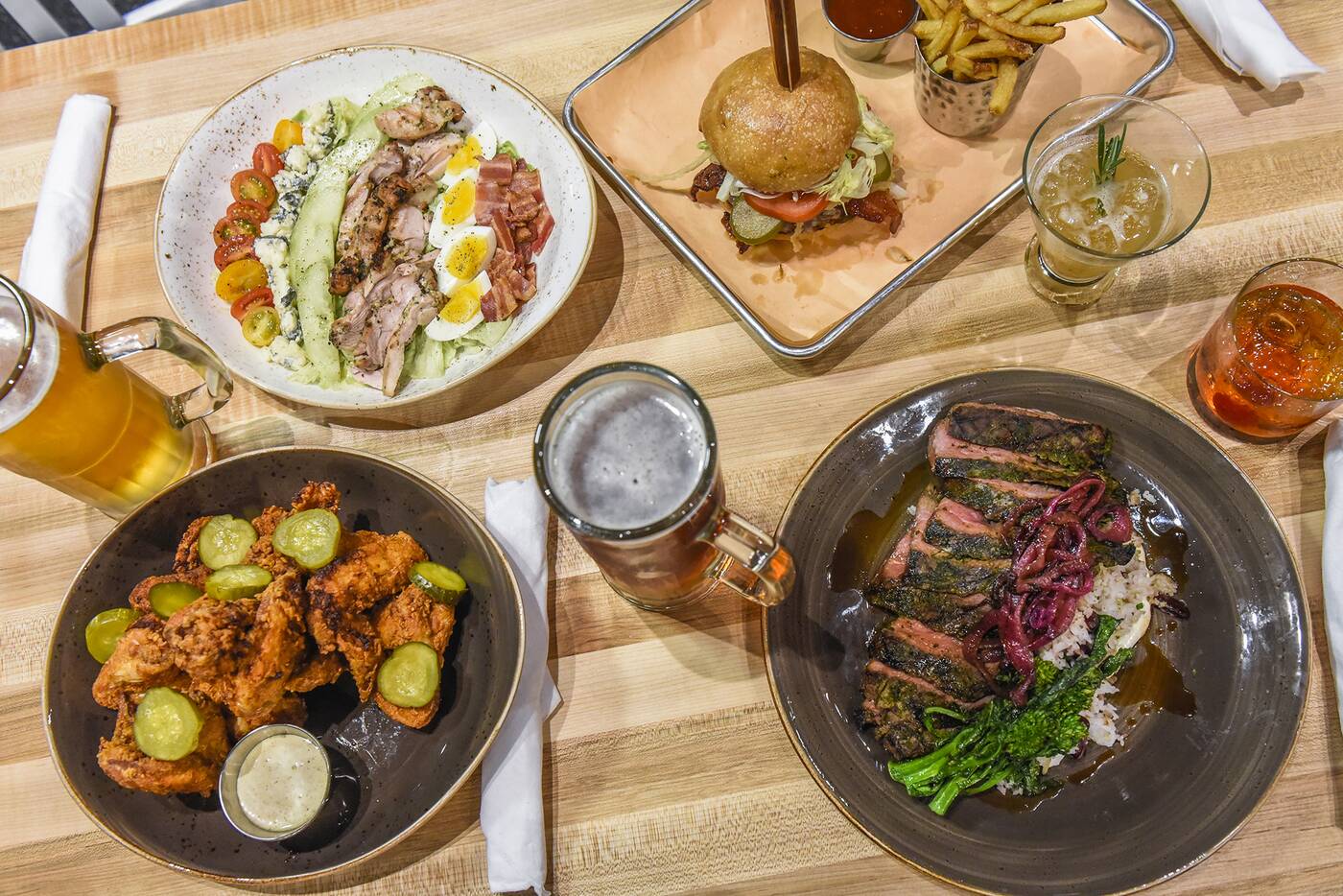 Track 10—the name of its restaurant portion—takes up about one third of the venue. Meanwhile, the gaming section takes up the rest. 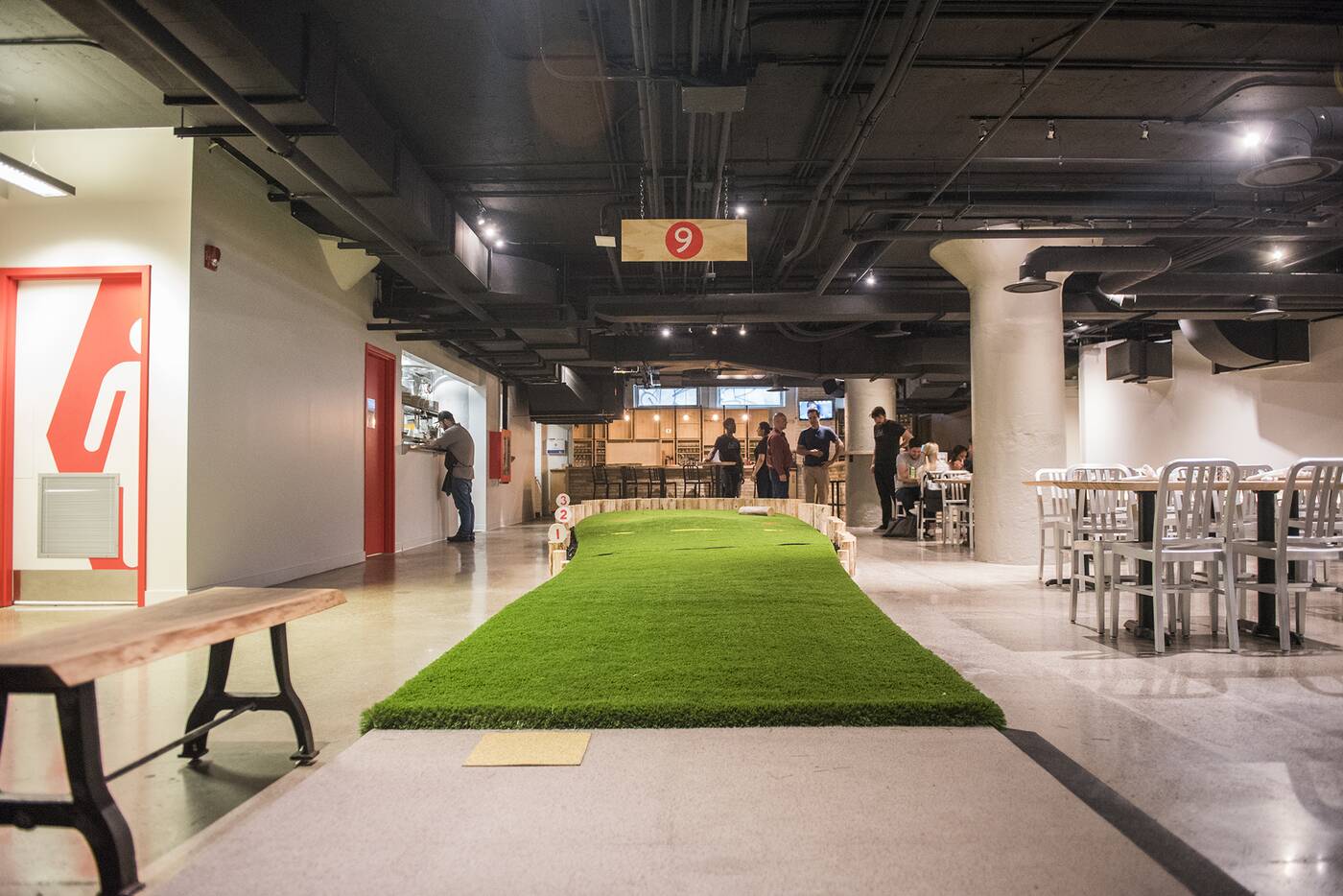 Those who don't know the rules of either bocce or golf will be pleased to know it's really simple. For $18 a person, groups of four or less can play through a round of nine 'tracks,' which are all unique in their own way (just like mini golf). 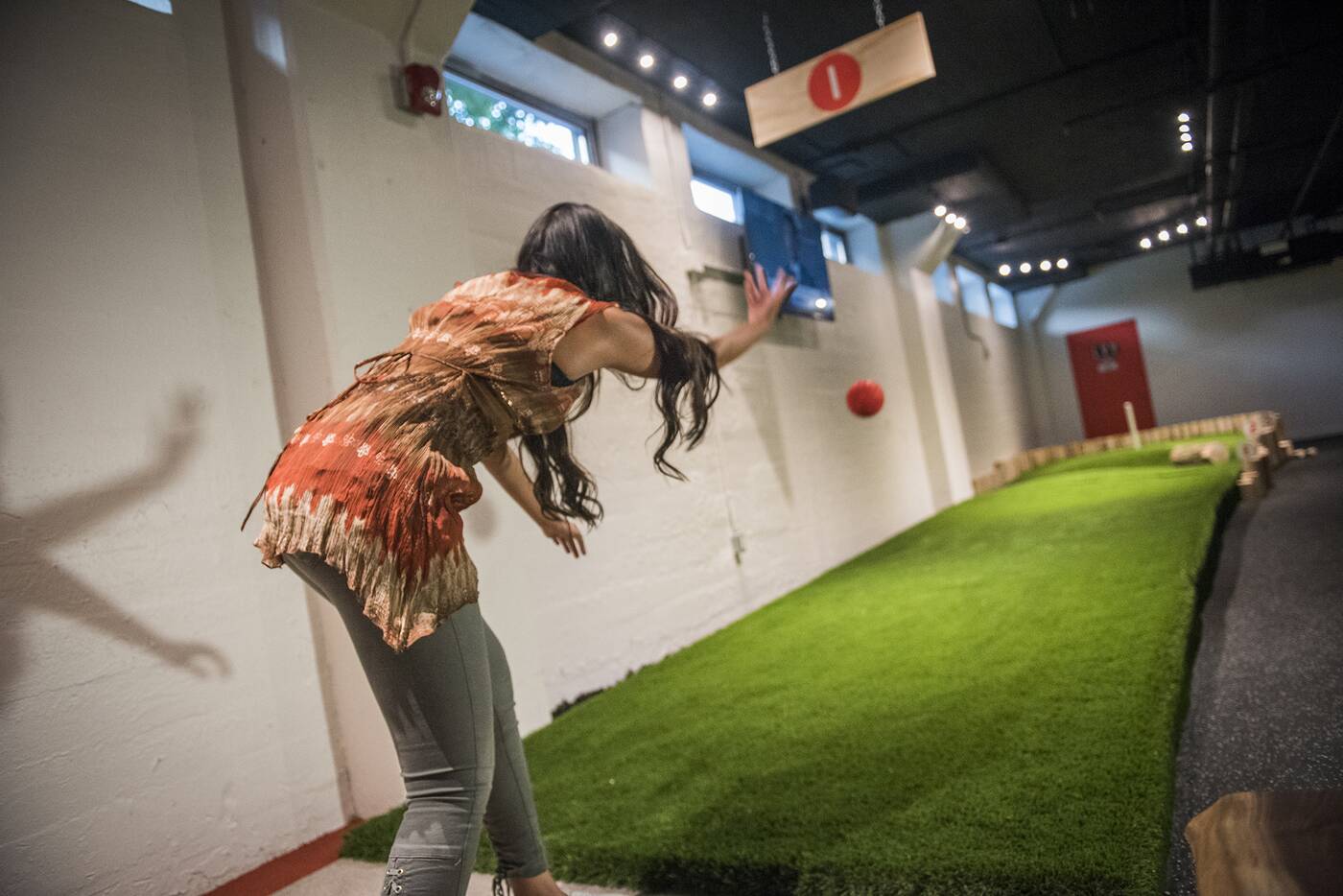 Starting at pitch one, players get two balls in one colour of their choice, which you can carry through the course in an adorable leather satchel. 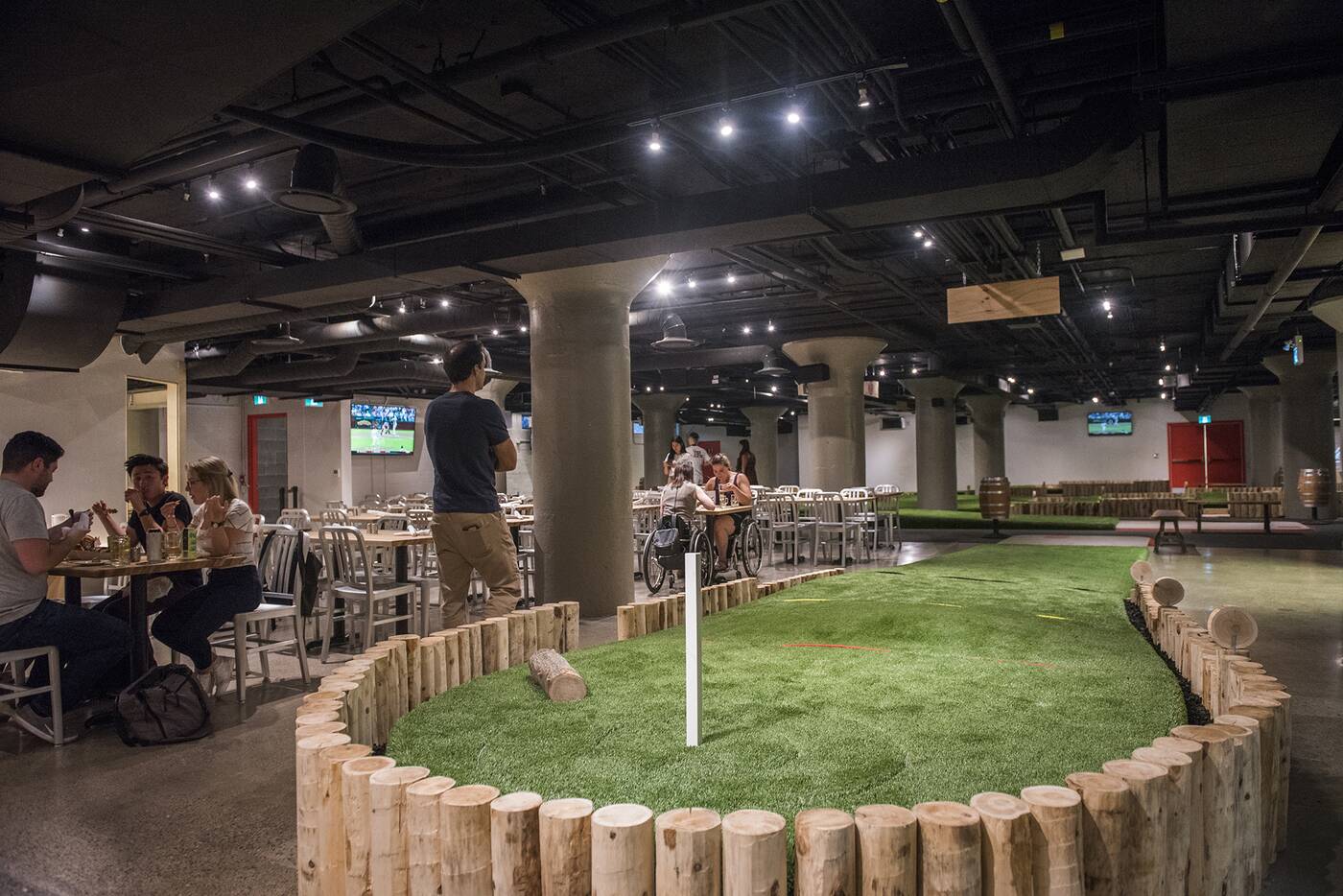 An attendee will be on hand at the first pitch to explain the rules and outline small etiquette stuff, after which you're off. Players take turns throwing the balls (which are lighter than average bocce balls at 2 lbs 5 oz, and ridged for gripping), aiming for 'perches' which sit about 40 feet away. 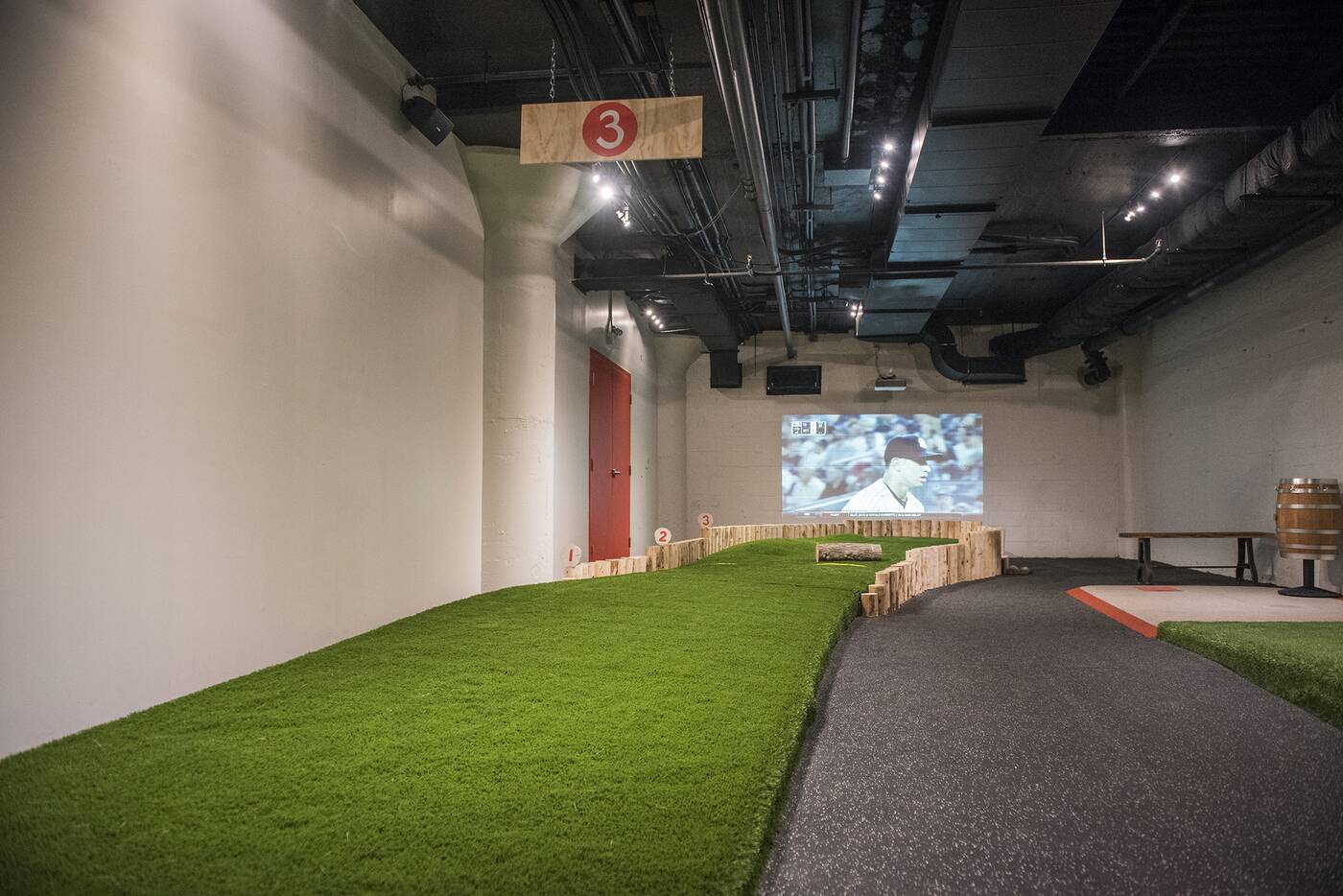 The goal is get your balls inside the rings and not in the gutters, which line the pitch (it's minus one point if your ball rolls in there). The pitch is filled with hills and log obstacles, so it's more challenging than it looks. 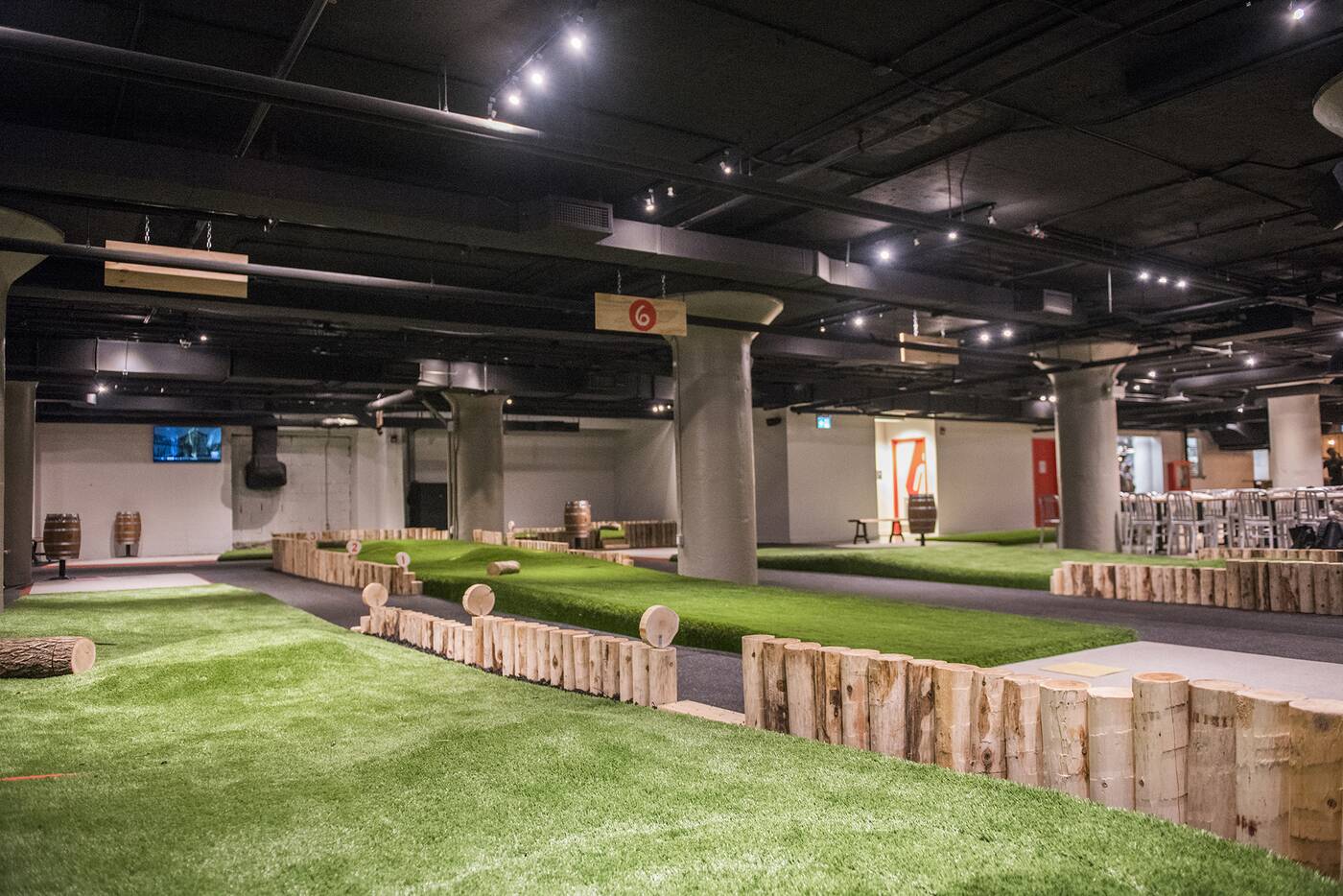 The point system is pretty clearly demarcated on the field, ranging anywhere from one and five points. If, by chance, you get your ball touching the white stick, you get ten points. If you're the salty type, try knocking your opponents' balls to mess with their final score. 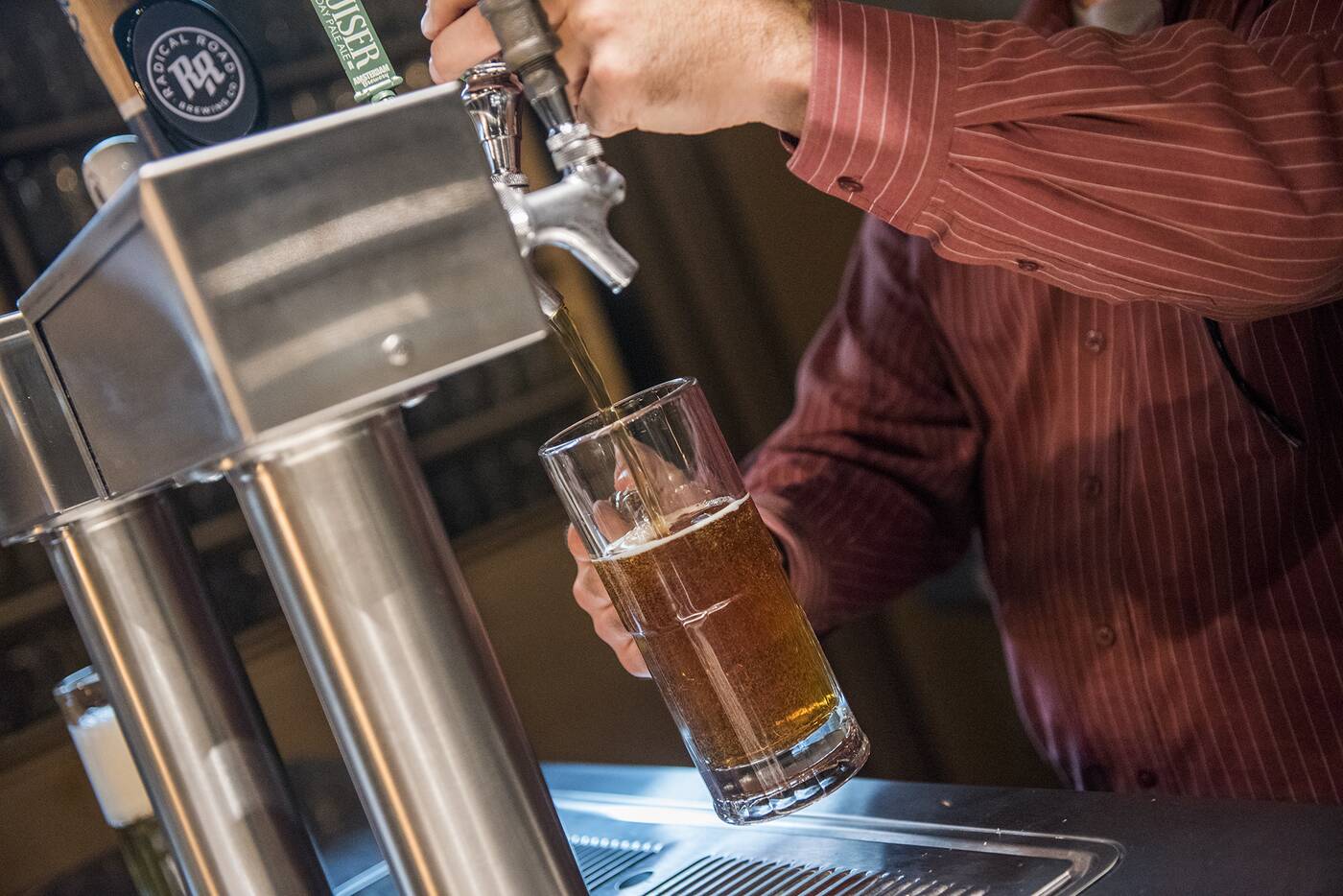 You can keep track of all of this using the point card provided while sipping on some beers, which you can carry with you anywhere in the game section. (Fact: LOB has gone out of its way to feature six craft beers from east side breweries like Saulter Street and Radical Road). 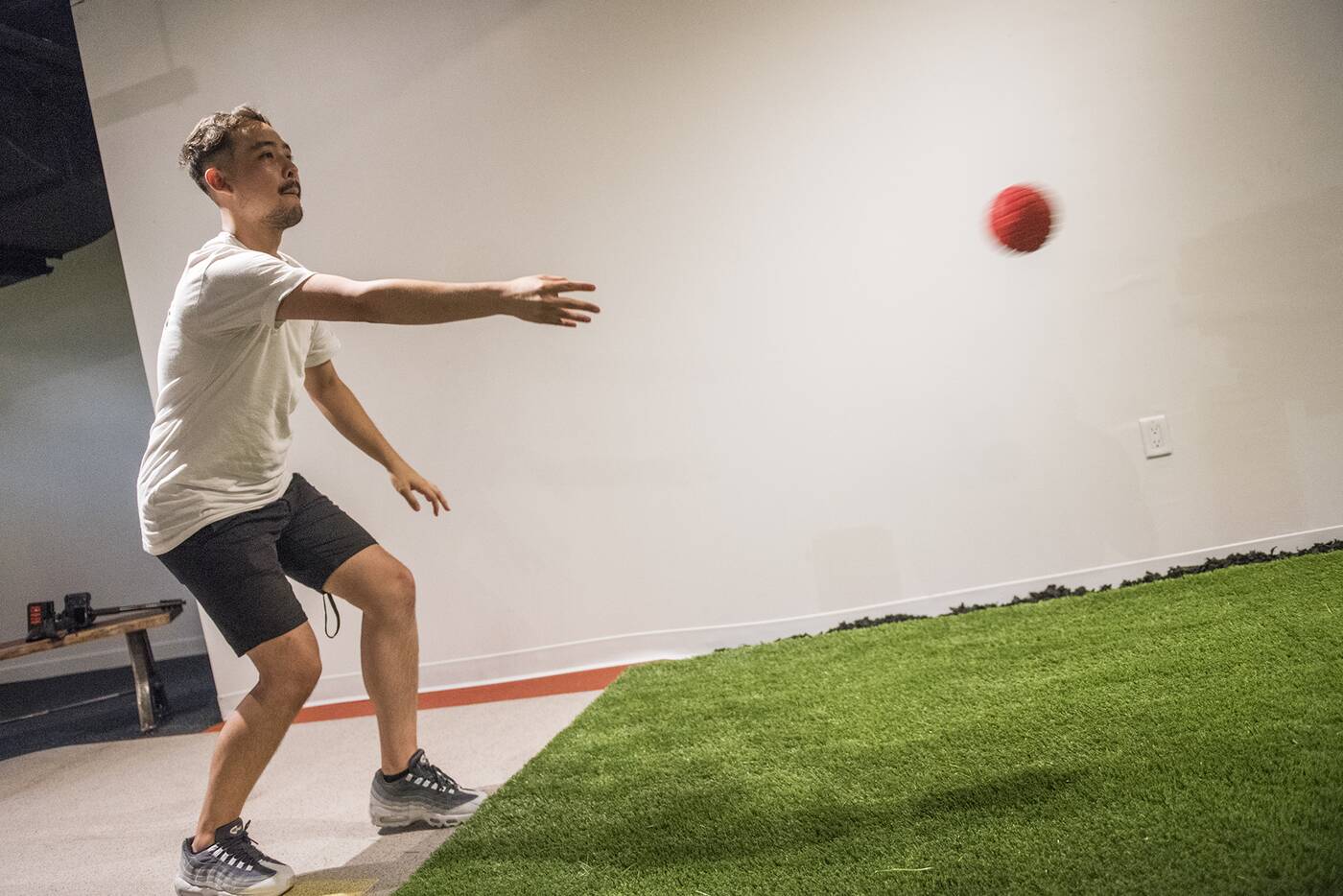 There's a few details to remember when playing, like keeping a foot on one of the designated 'Lob Spots' marked on the ground. Pro tip: the best way to underhand throw your ball is with the palm down—classy. 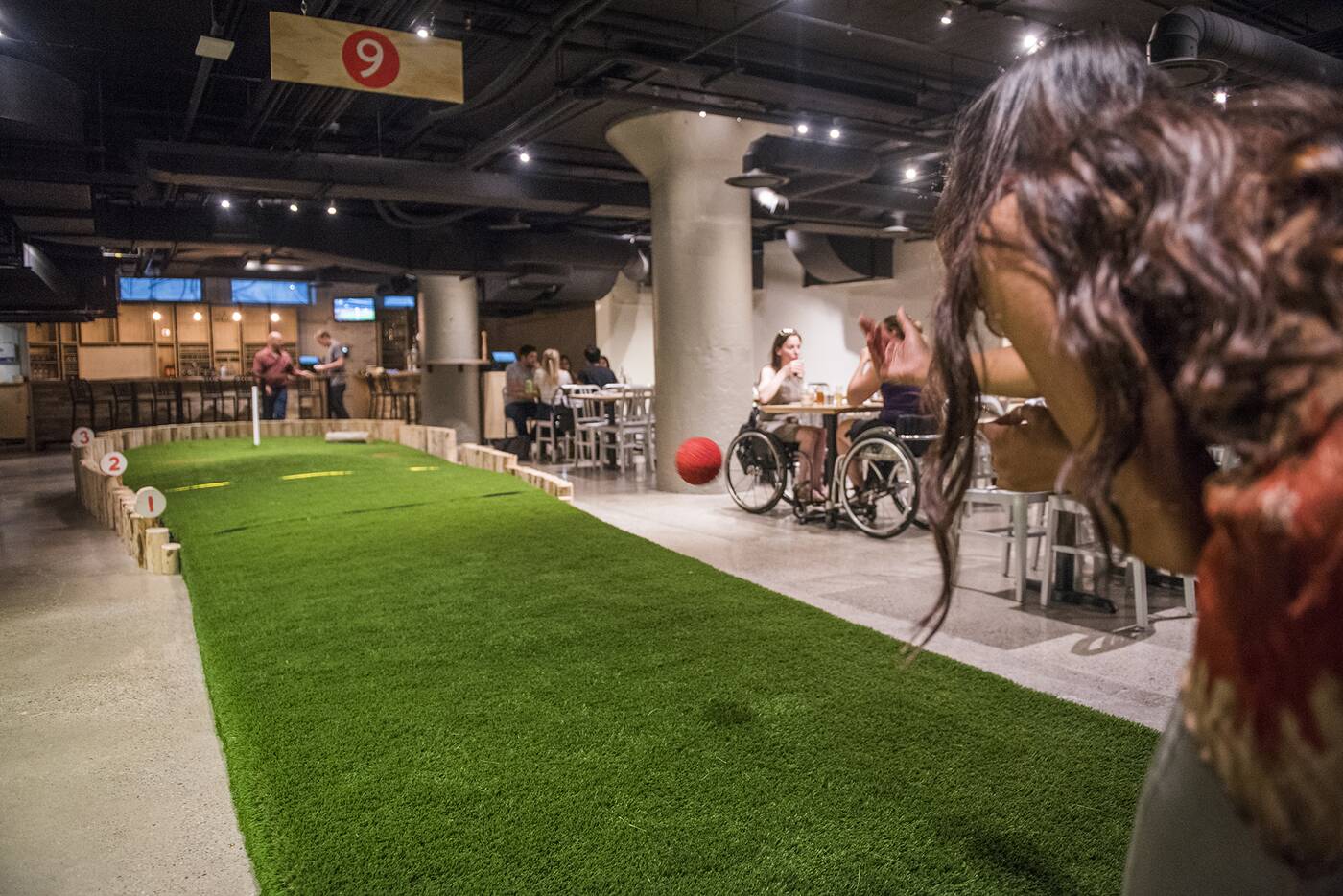 The final pitch is the hardest, not because of the terrain, but because its smack dab next to the restaurant portion of Lob for an epic end to the game. Depending on playing level, the whole course should take four people about 45 minutes to play.

Once you've worked up an appetite, Track 10's menu comes through with a hearty selection of food items by chef Kyle McClure of Vantage Venues, where everything from the bread to the ketchup is made in-house. 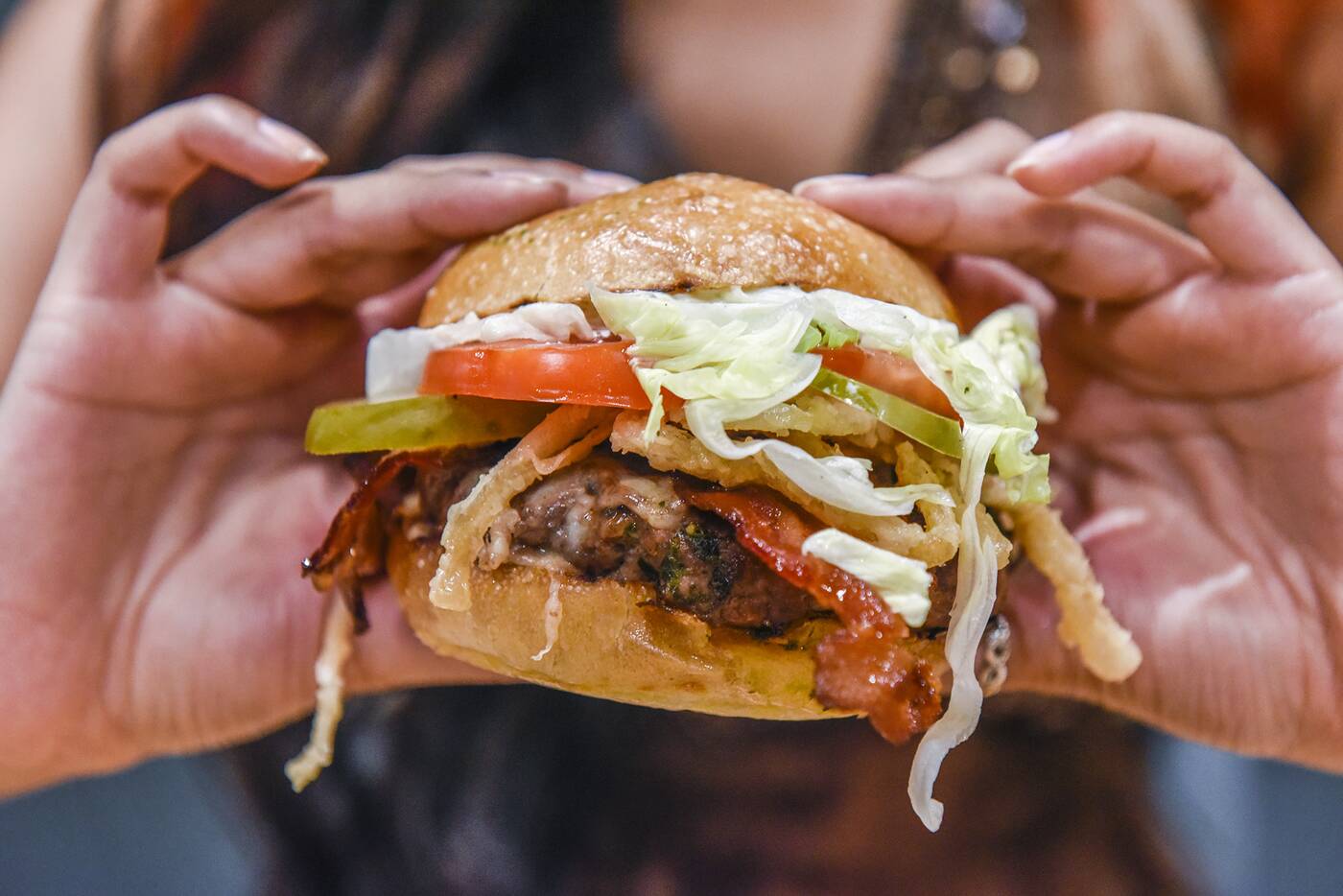 The LOB Burger ($17) is satisfying, with cheddar, onion, candied bacon and a signature LOB sauce that makes the whole thing extra juicy. Fries are served with an addictive ketchup that's sweeter than the usual. 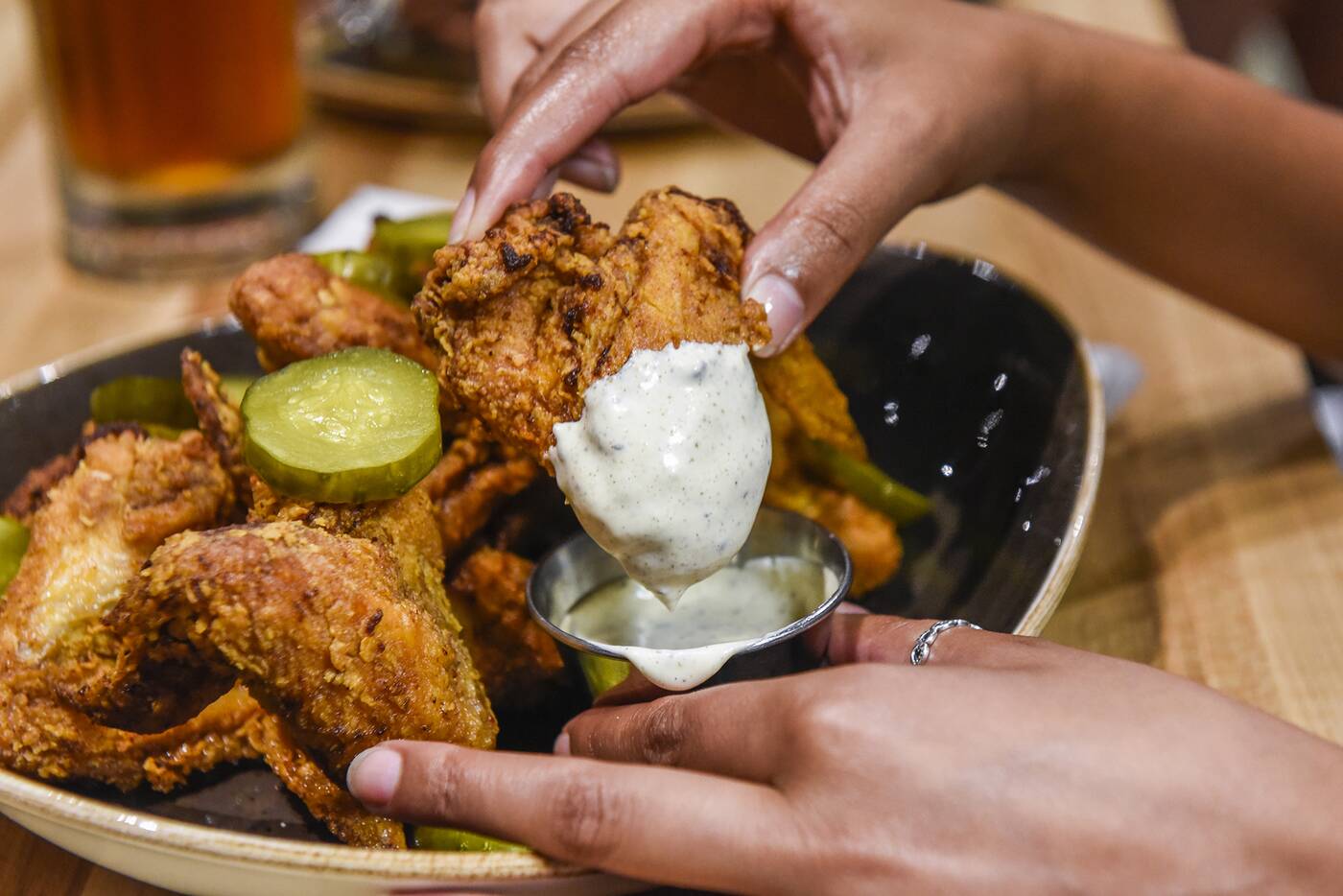 The Nashville hot chicken wings ($19) are phenomenal and come served with butter pickles and a tasty side of lemon aioli sauce. 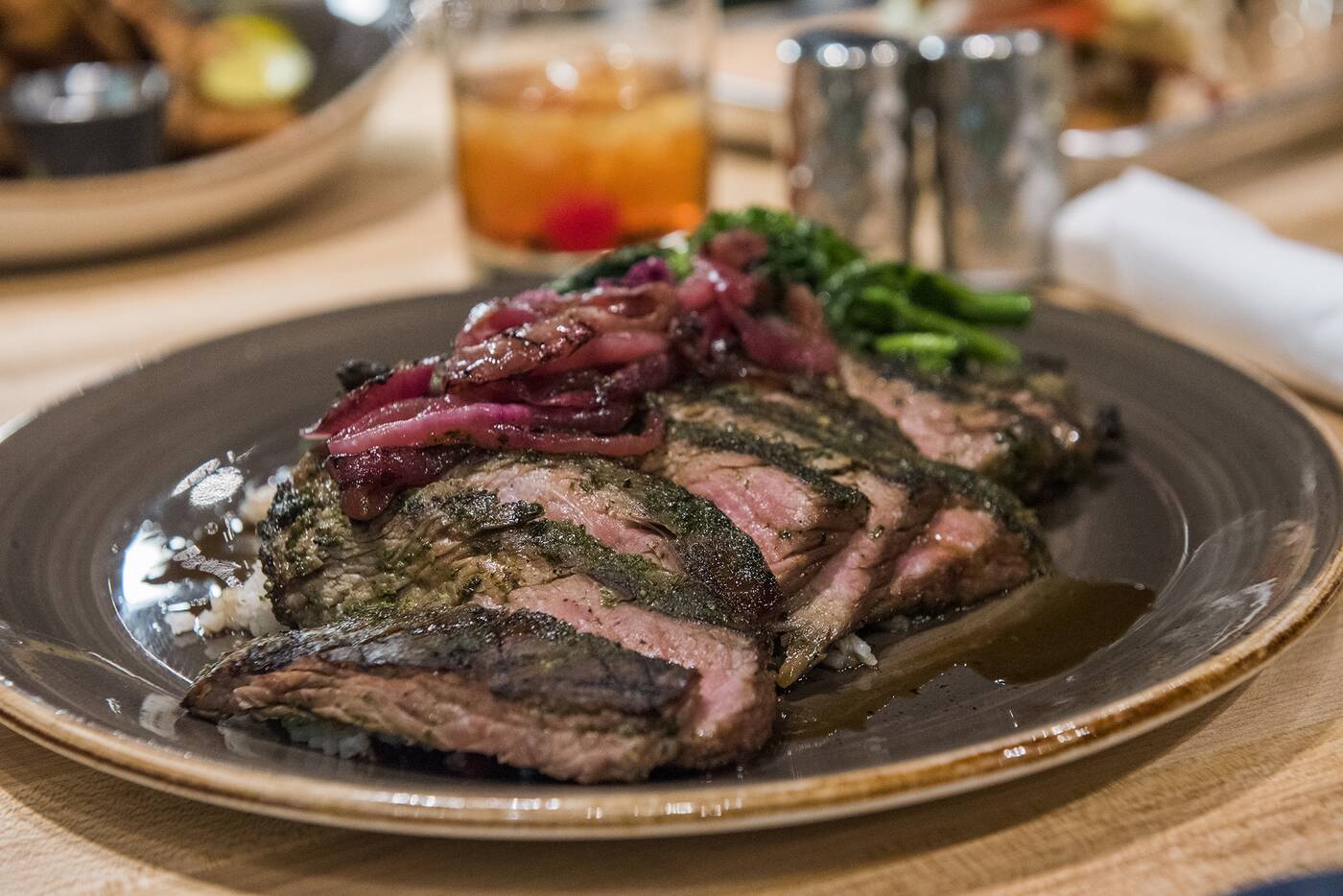 A sturdy plate of Chimichurri flank steak ($24) is cooked sous-vide and comes with rice and beans, queso and sautéed greens. 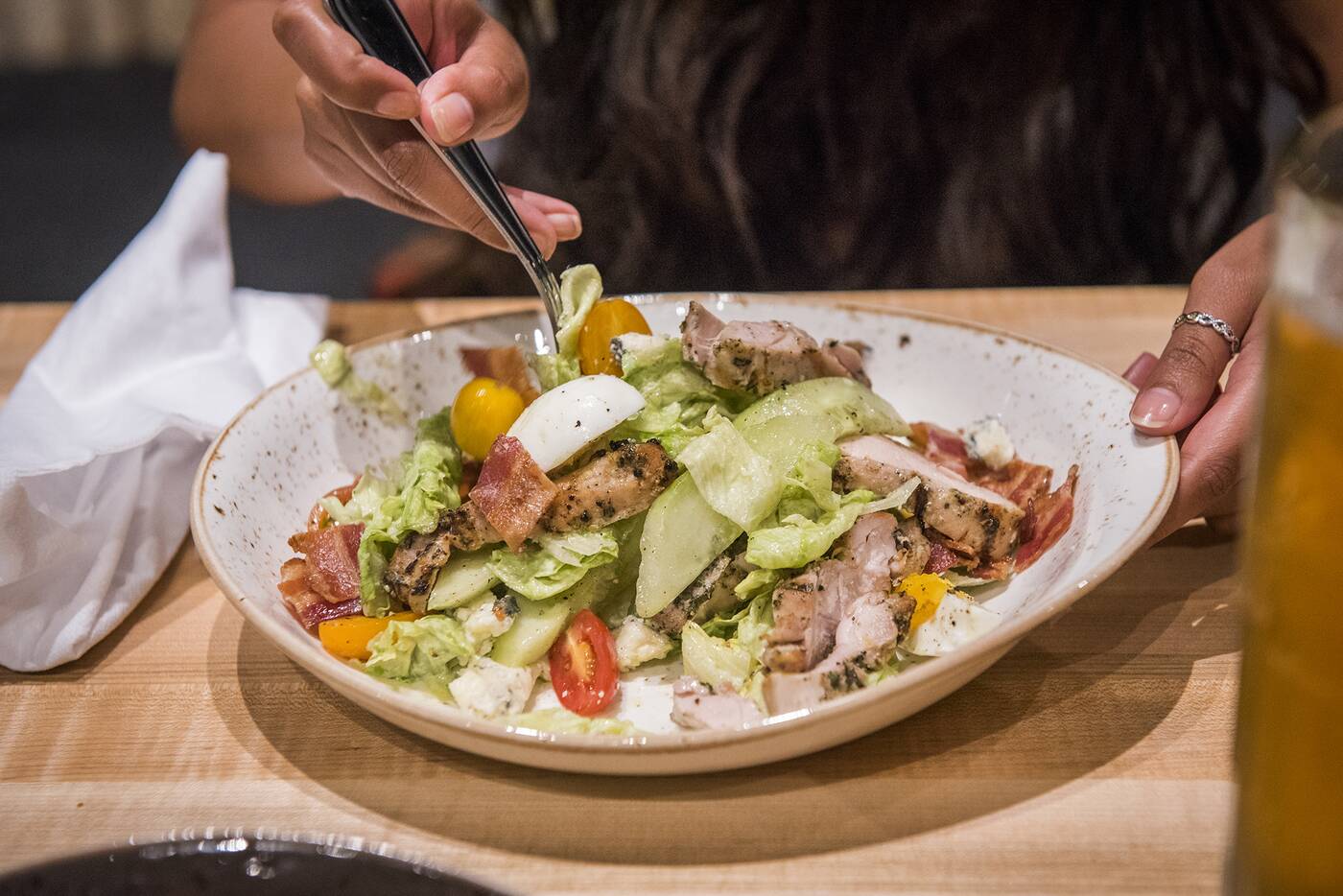 And the Lob Cobb salad ($15) is a big, neatly arranged bowl of chicken, bacon, boiled egg, blue cheese and greens. 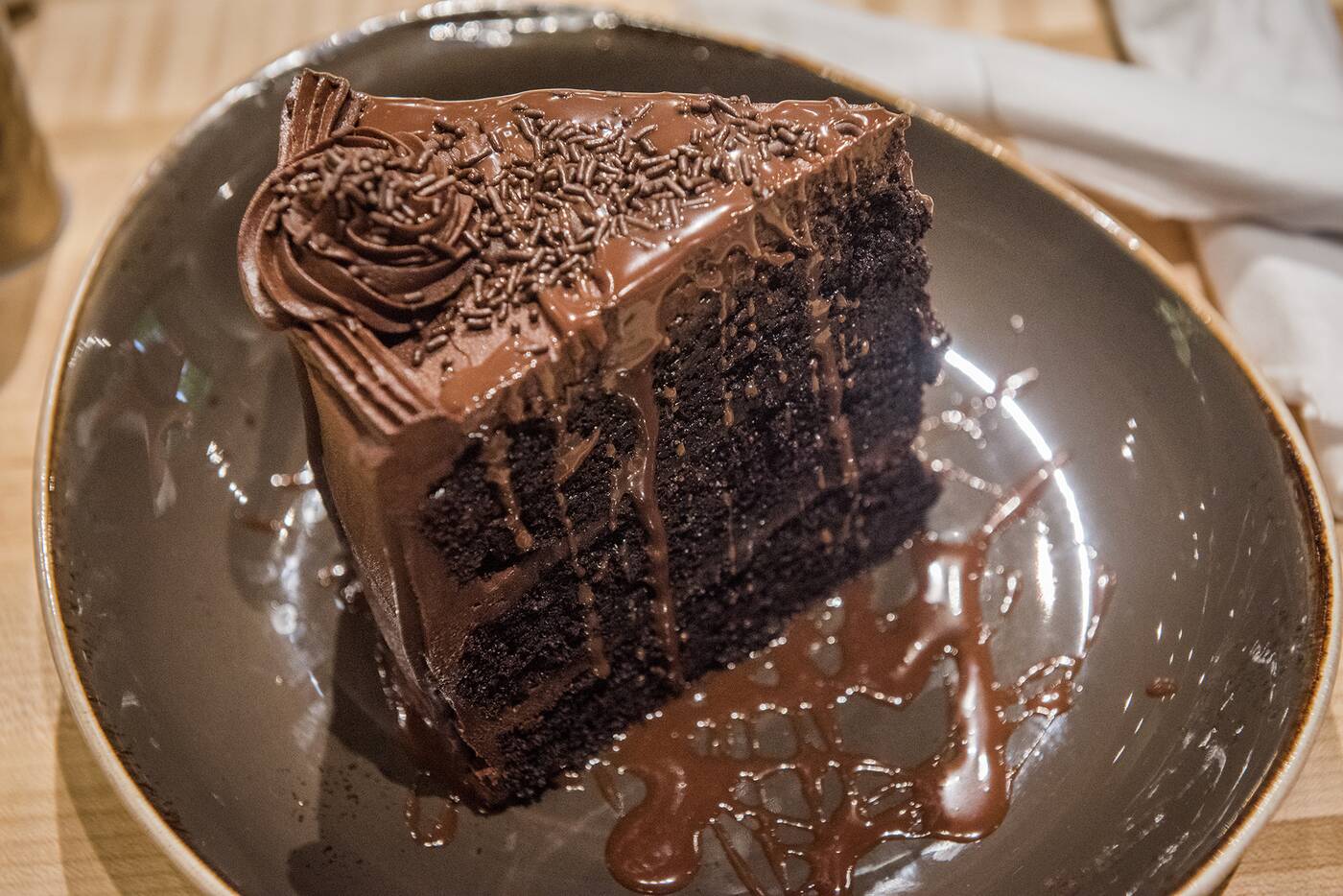 Those with a sweet tooth will swoon over the decadent Death by Chocolate Cake, which, for a measly $8, is unreasonable large and shareable between as few as two people. 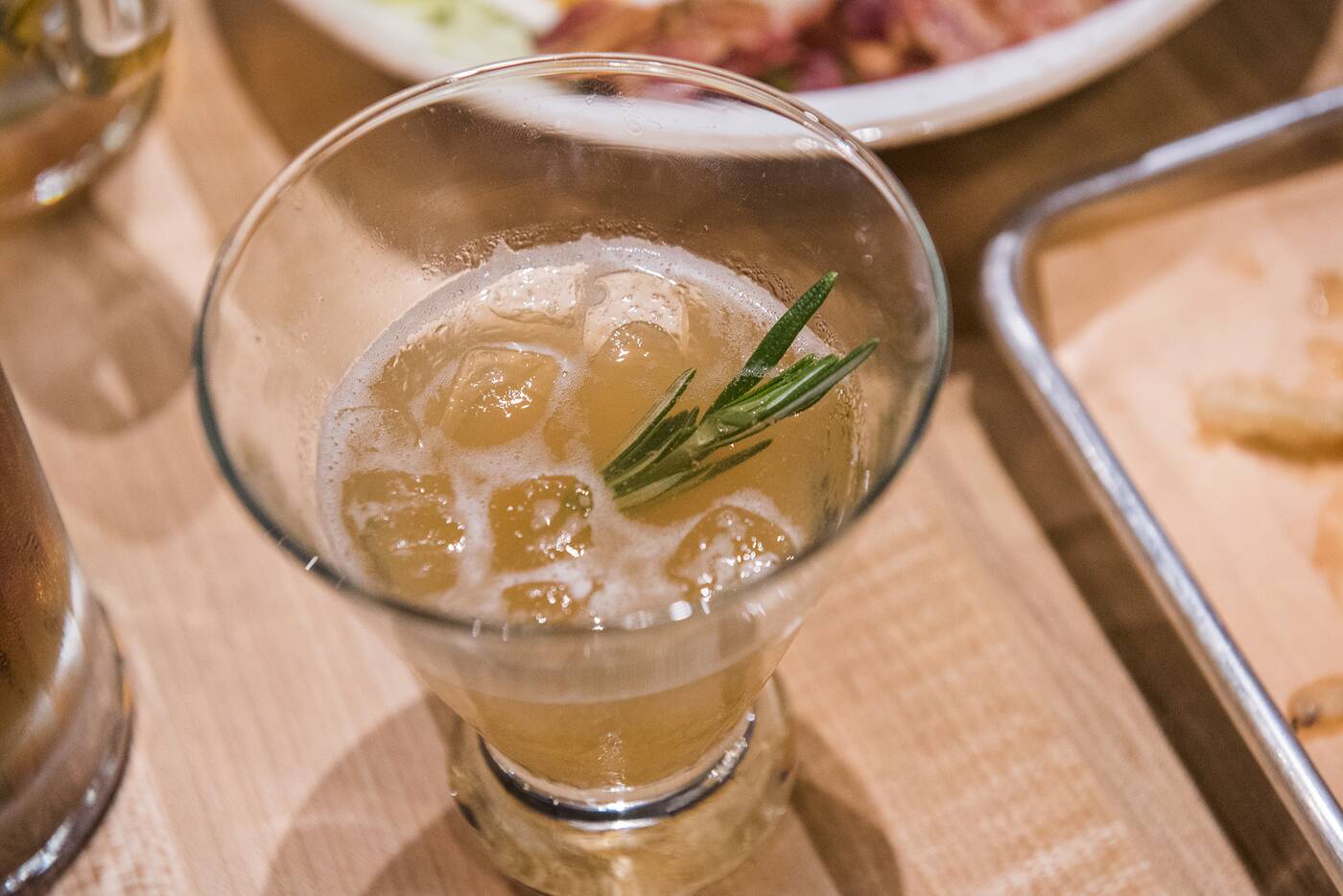 Cocktails range between $10 and $12 here, including the Disaronno Sour ($10), a refreshing drink that comes with a sprig of rosemary. 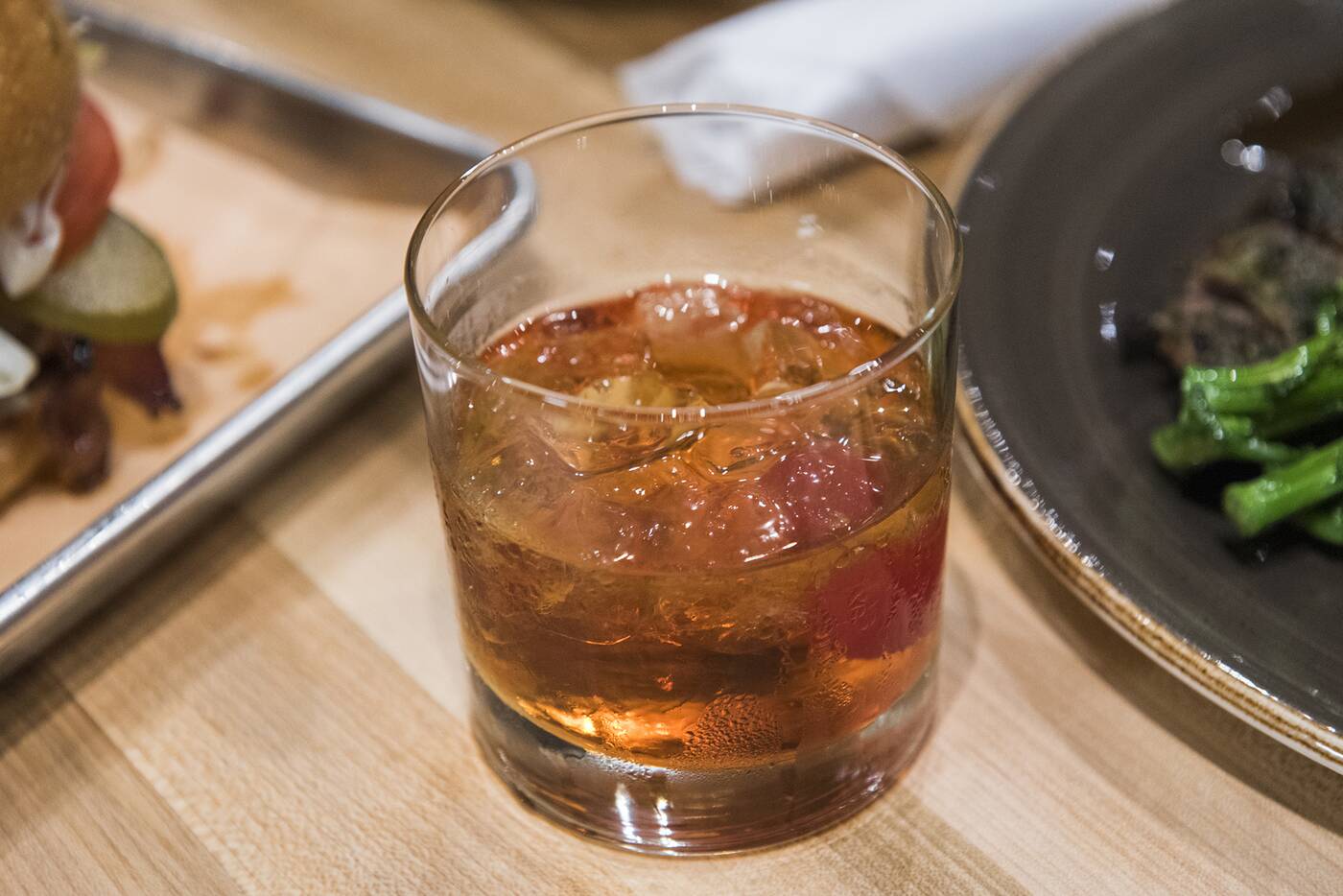 There's also the Disaronno Godfather ($10), which features some Gibson's whisky.

If you're looking for unique date night spots or group-gathering hangs in the east end, I highly recommend LOB. It's a new game, so you can bypass the awkwardness of sucking at it (everyone else will too) and get drunk off some local brews along the way. 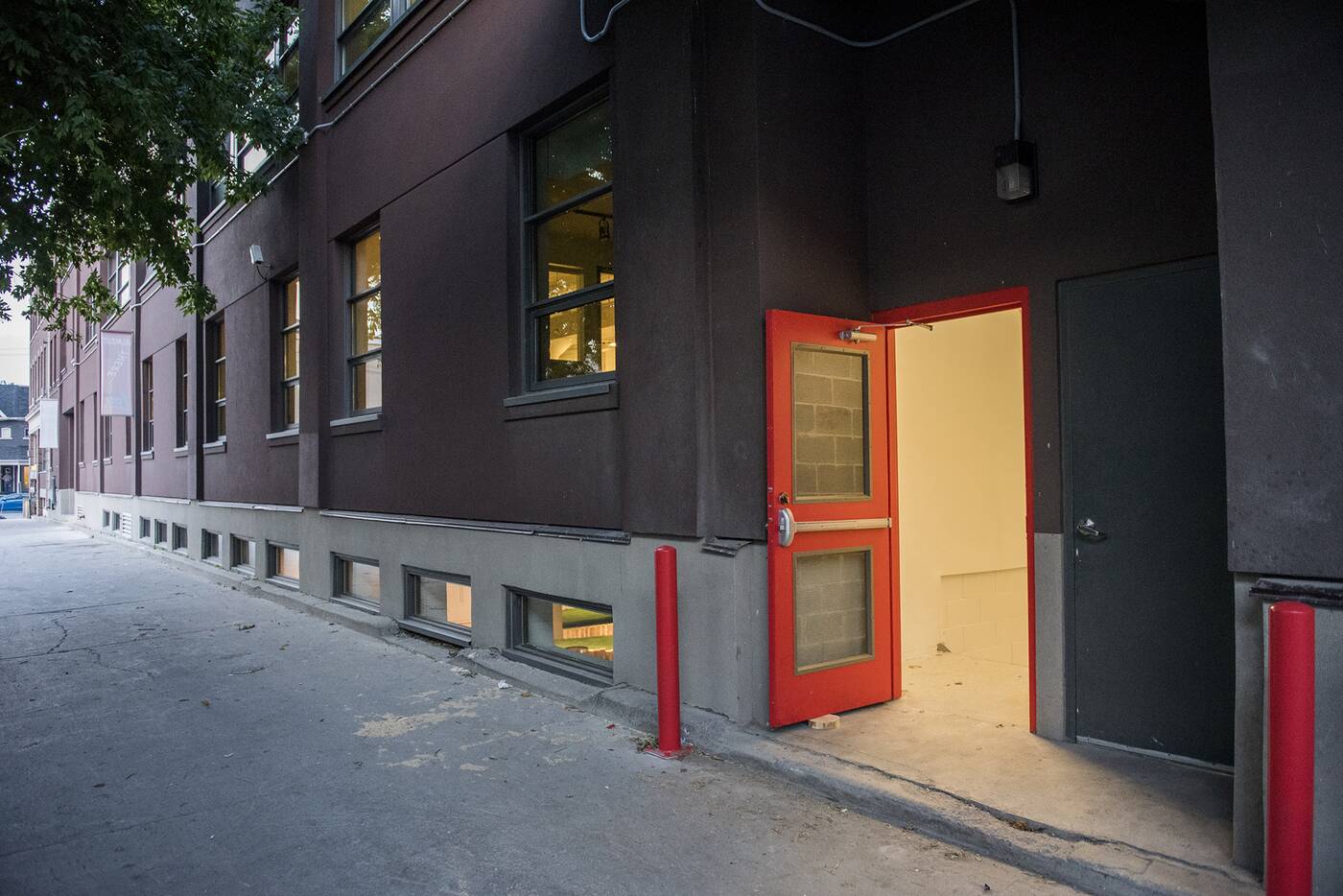