Saulter Street Brewery is currently open but their offerings and services may be affected due to the pandemic. Please contact the business directly for more information about any changes. Is this your business? Please contact us if you would like to update this message.

Saulter Street Brewery is a small indie brewery, taproom and bottle shop housed in a barn-like building at the end of the street that gives it its name.

Follow the clink of glasses and the chatter of lively conversation past the sound of GO trains whizzing right by, and you’re sure to find the semi-hidden space. 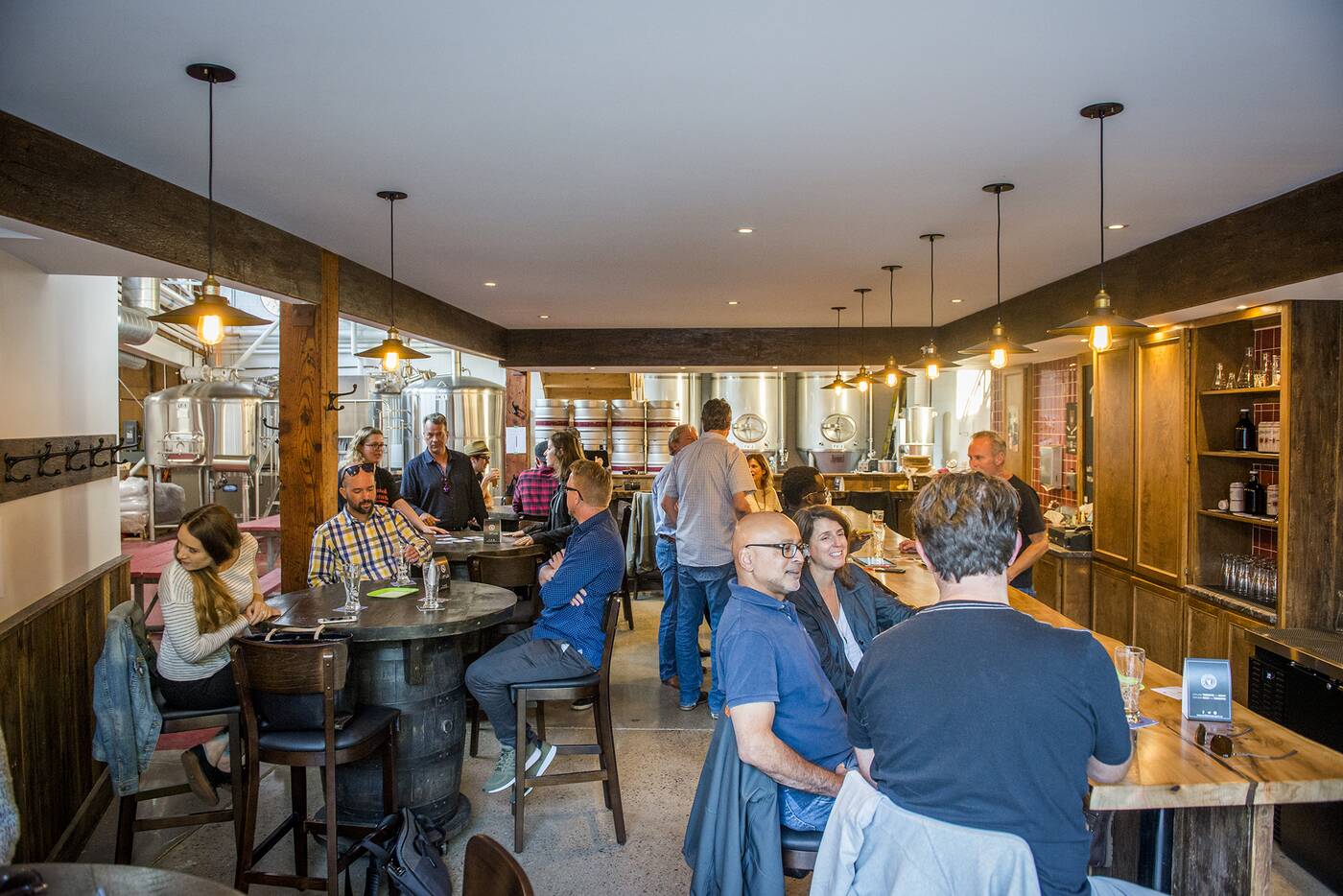 Also look for their logo outside, featuring a clock evoking the one on the bridge that marks entryway into this neighbourhood, theirs pointing to 5 p.m.

The taproom is meant to feel homey and almost cottagey, all reclaimed wood and tables made from barrels. 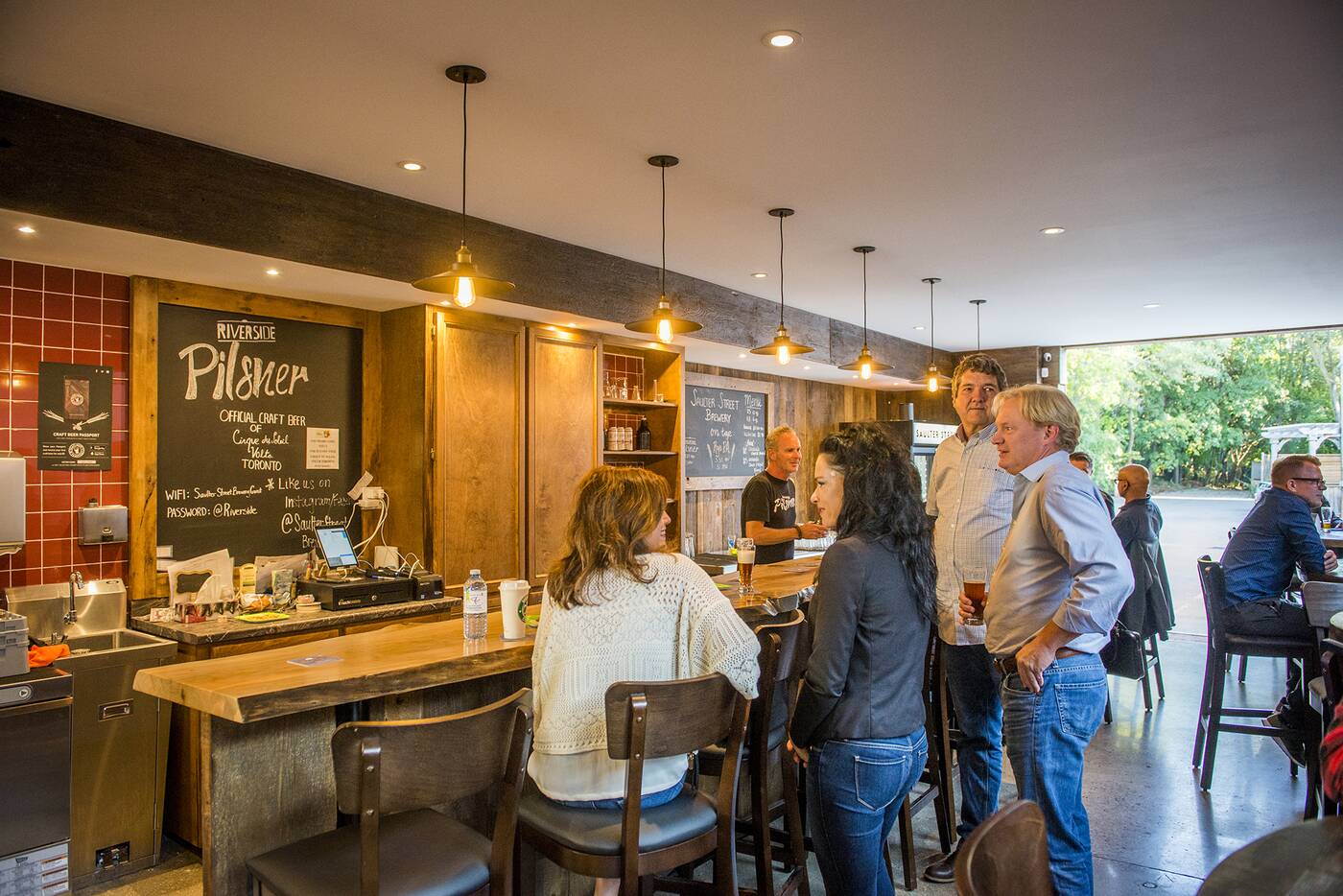 An impressive bar top is made from one solid piece of live edge wood. 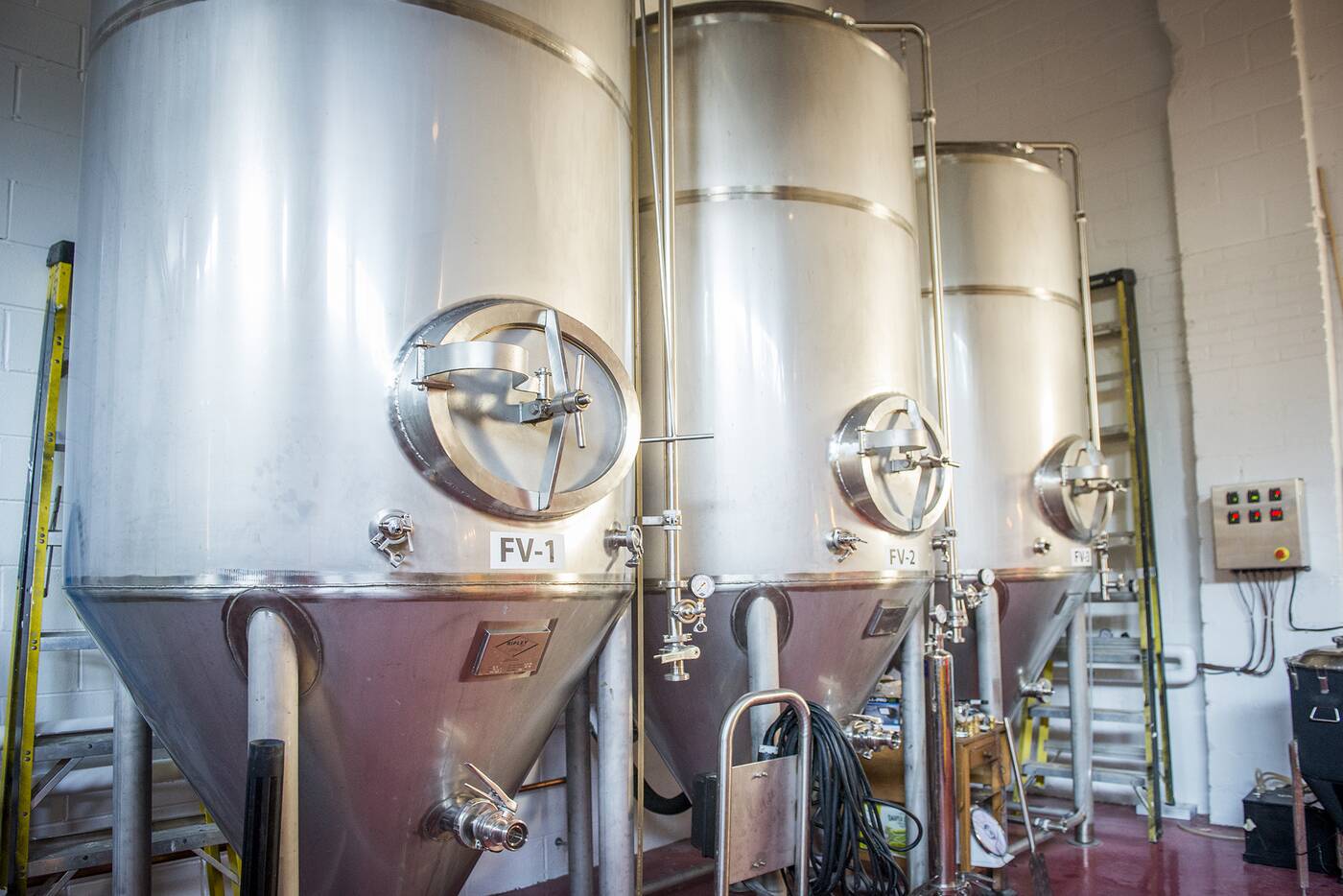 All brewing equipment is completely exposed, not even a transparent barrier between drinkers and the 25 hectalitre system, to which Saulter can always add more fermenters. 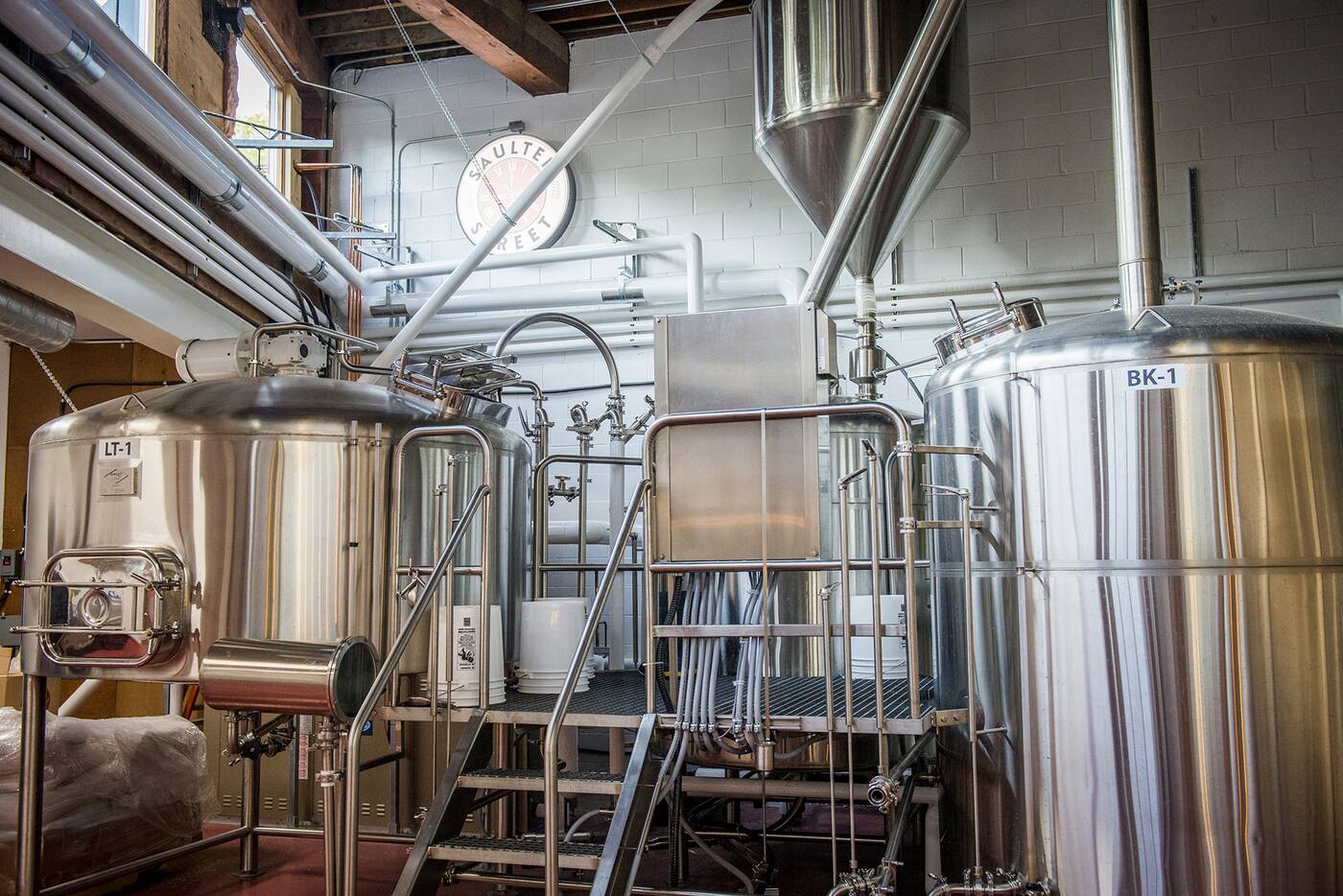 Bands even play live in front of the part of the brewhouse area. The equipment here is brand new, from BC supplier Ripley. 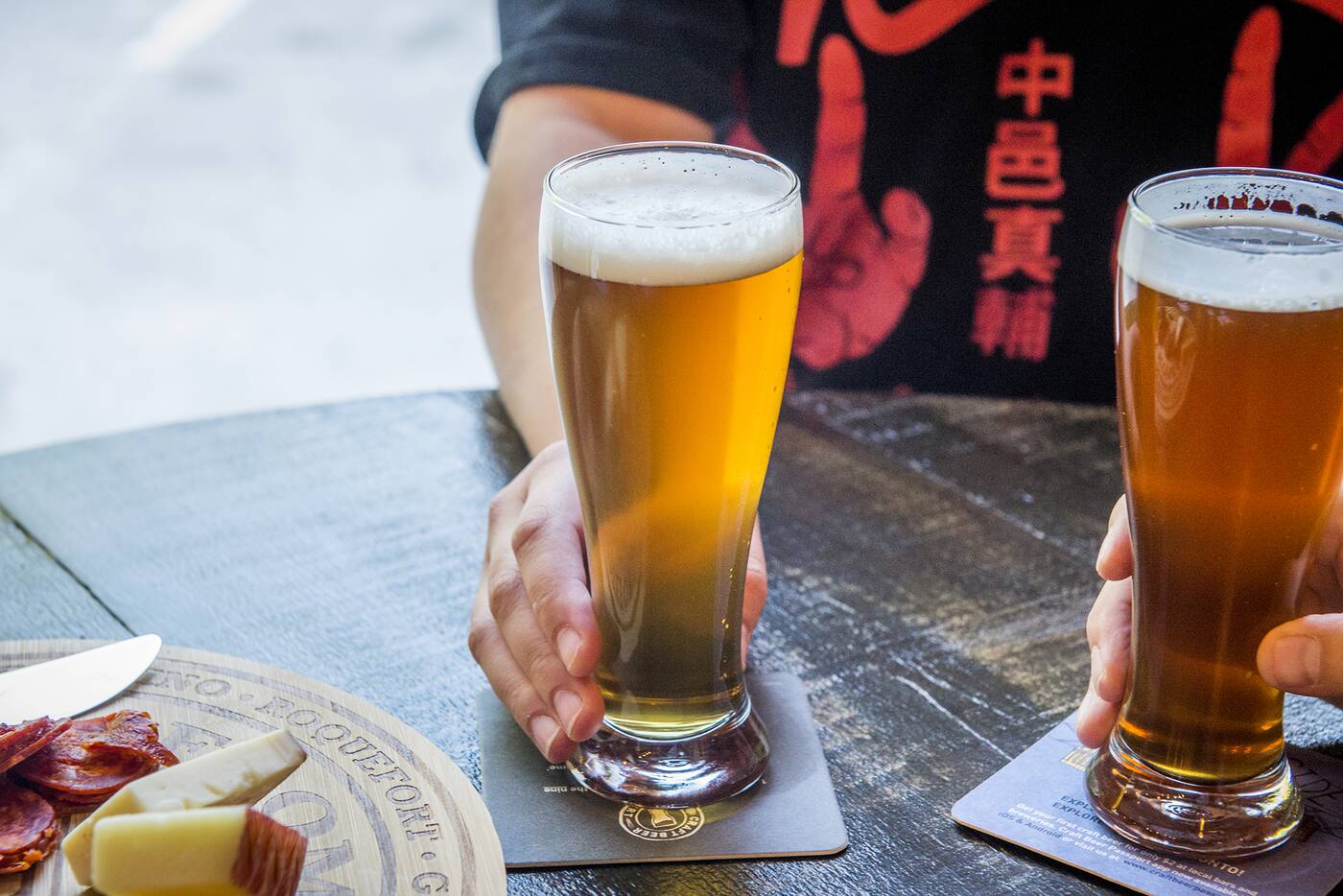 At the very outset of the business, offerings were minimal, the flagship beer a drinkable but memorable 4.7% Riverside Pilsner meant to be a neighbourhood beer staple.

Quality ingredients are used, adding a Munich malt to a traditional Czech style pilsner to give a little more complexity and colour. 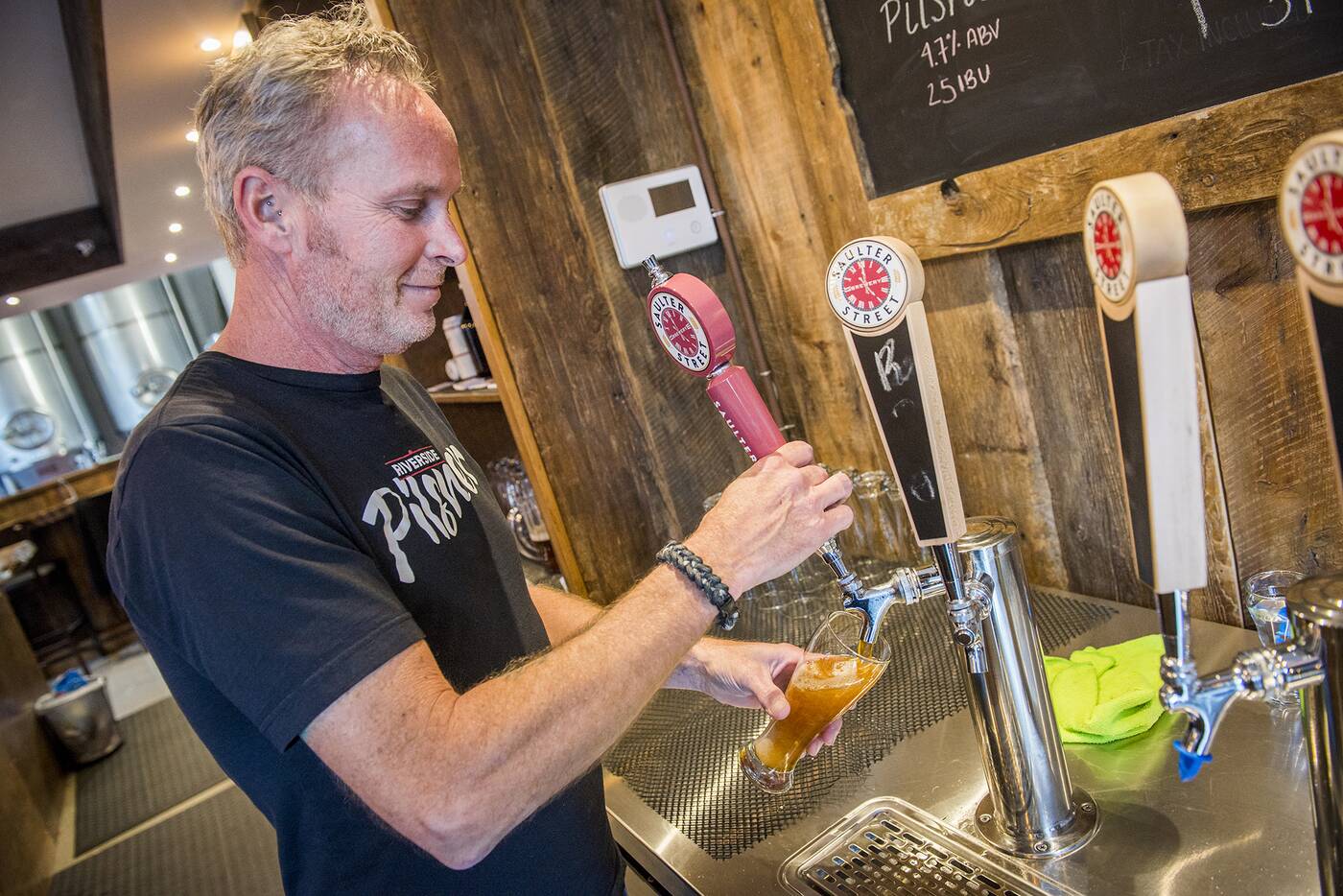 Pilsner is a rarer offering in the craft community as it’s more expensive to make because it takes longer, but the result is a crushable beer that’s still hoppy and flavourful. 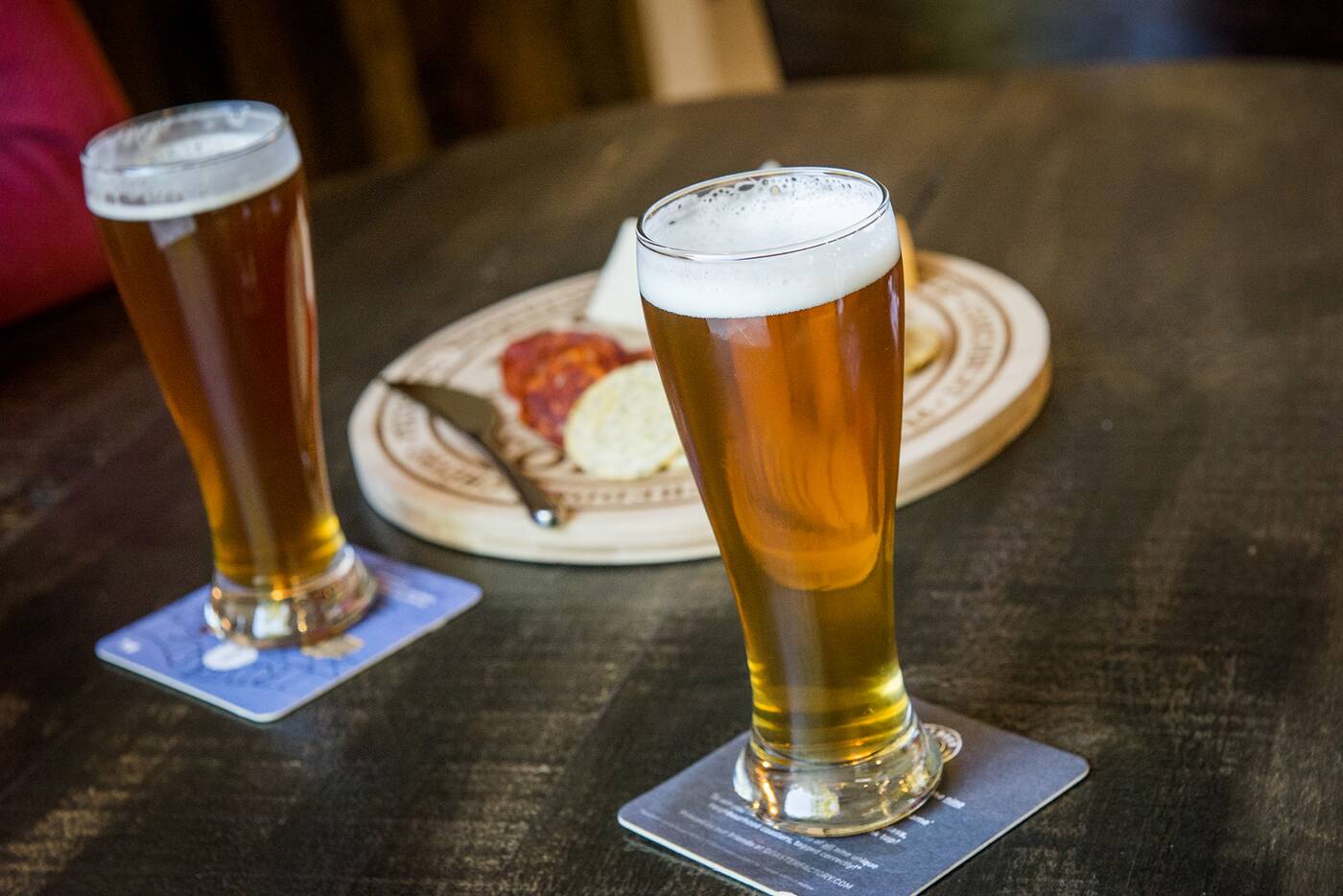 The other beer available during my visit was a rye pale ale that was a little stronger than the pilsner at 5.5%, uniquely offered as part of an experimental new beer Thursdays program using a fifty-litre small batch brewing system to create beers that will be available once then never again. 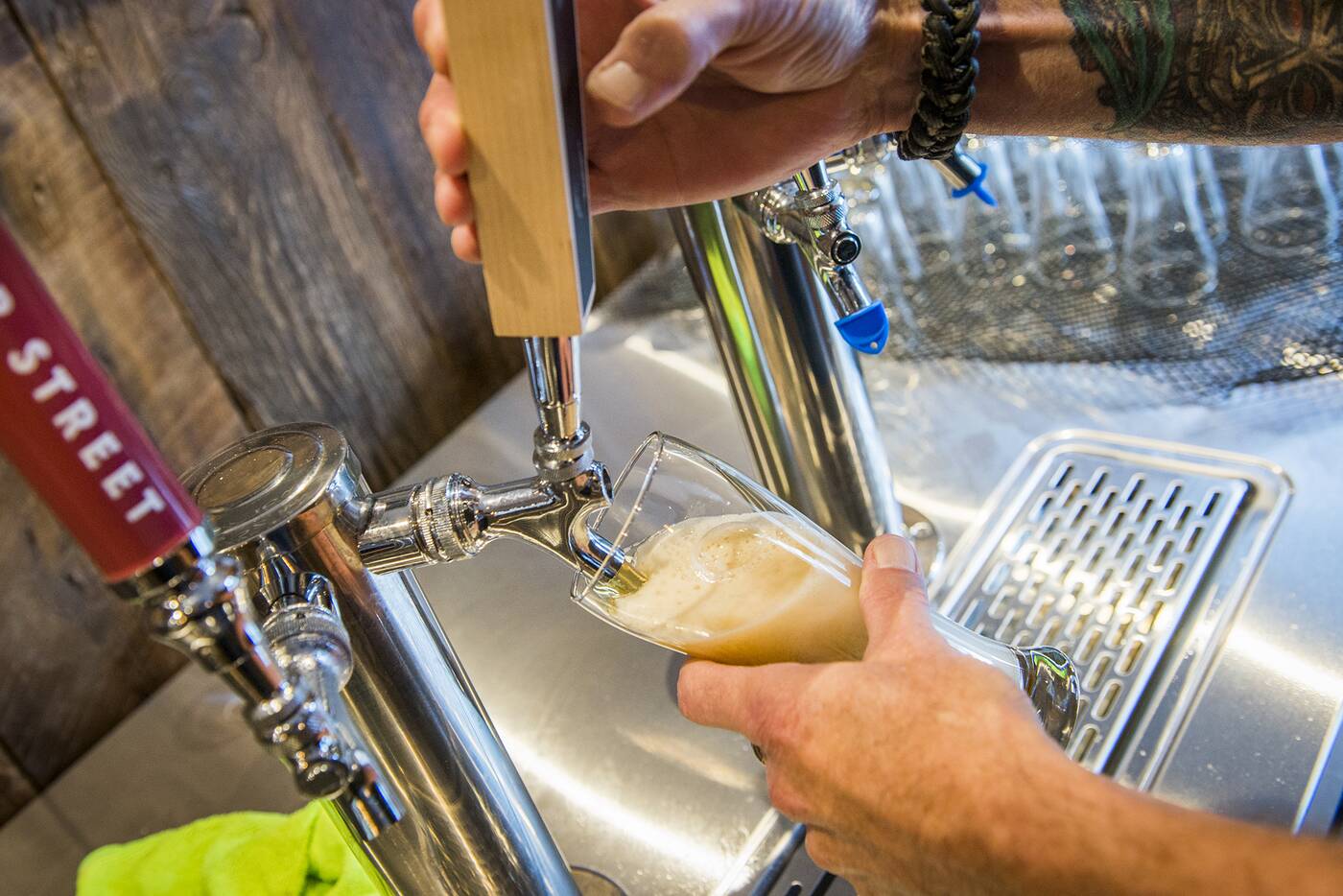 The brewery aims to at least have four beers on tap at a time typically, so they can serve flights, but while I was there the two were available in 12 ounce ($5) and 6 ounce ($3) pours. 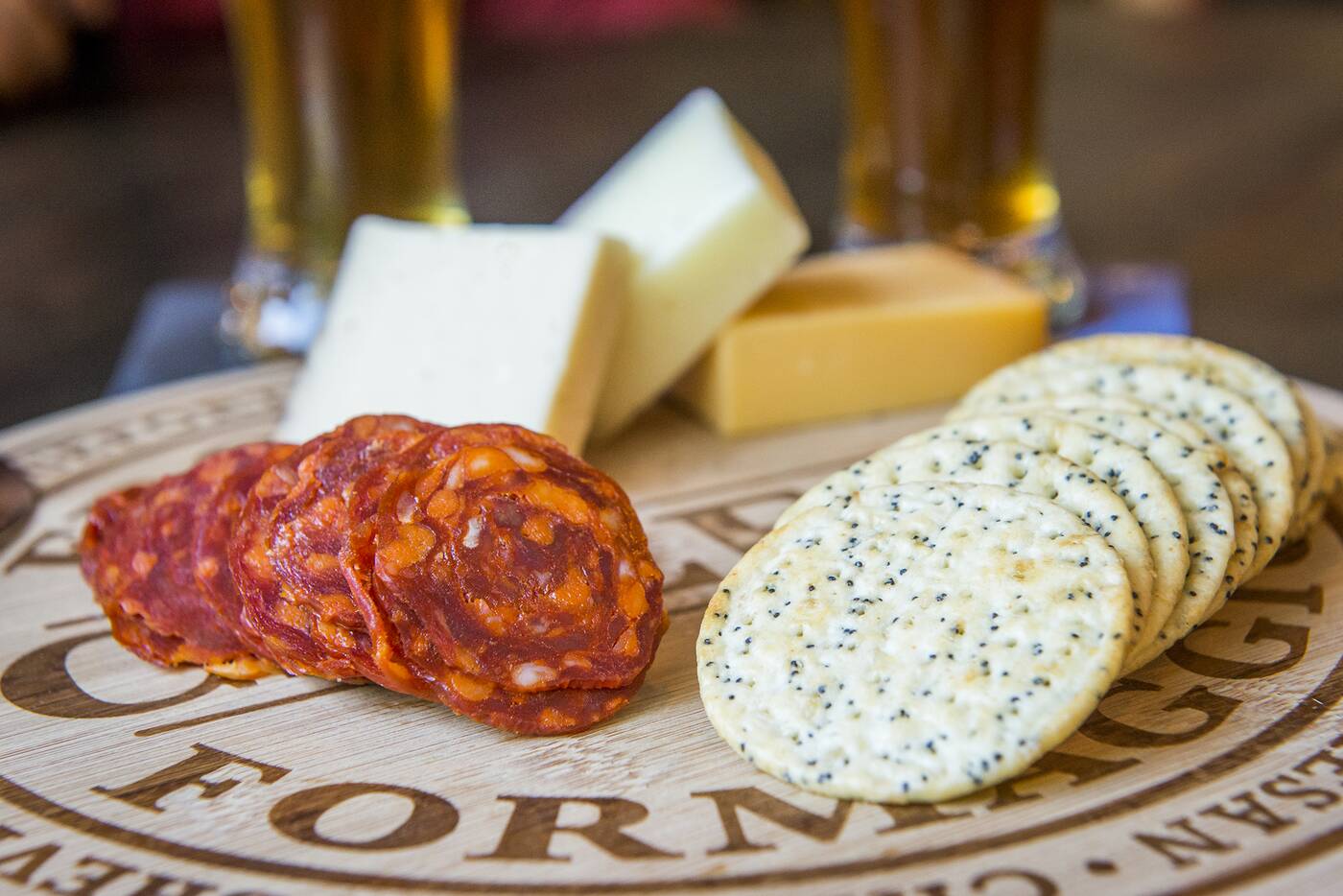 Plates of complimentary pretzels and peanuts dot every surface, but there are also more high-end snacks available from Leslieville Cheese Market in the form of cheese ($12) or cheese and meat boxes ($15). 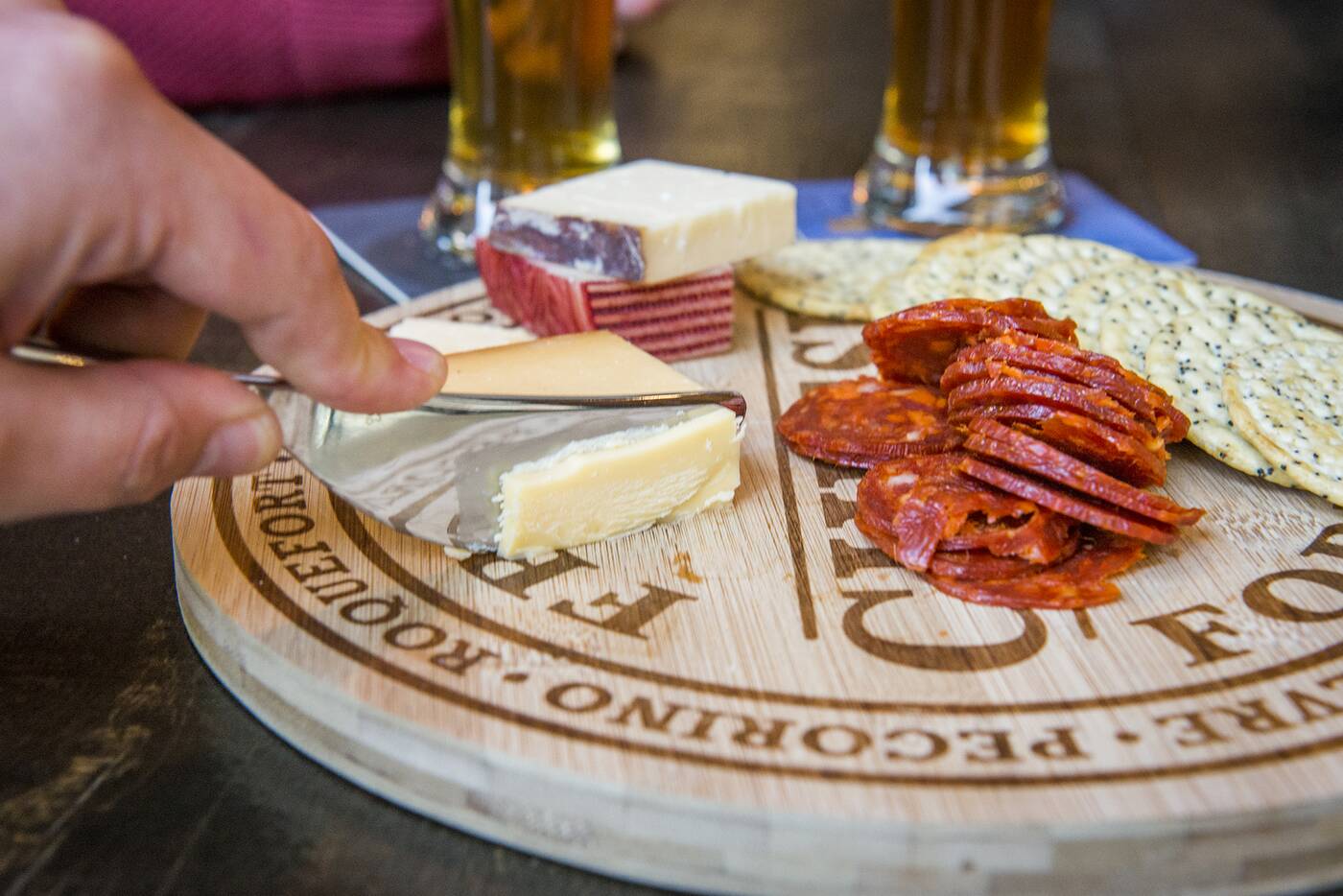 The rich, strong, creamy cheeses on our board include a classic semi-firm Beemster, an aged asiago washed with balsamic, and a 3-month aged semi-firm Manchego, paired with an oily spicy pork sausage and crackers. 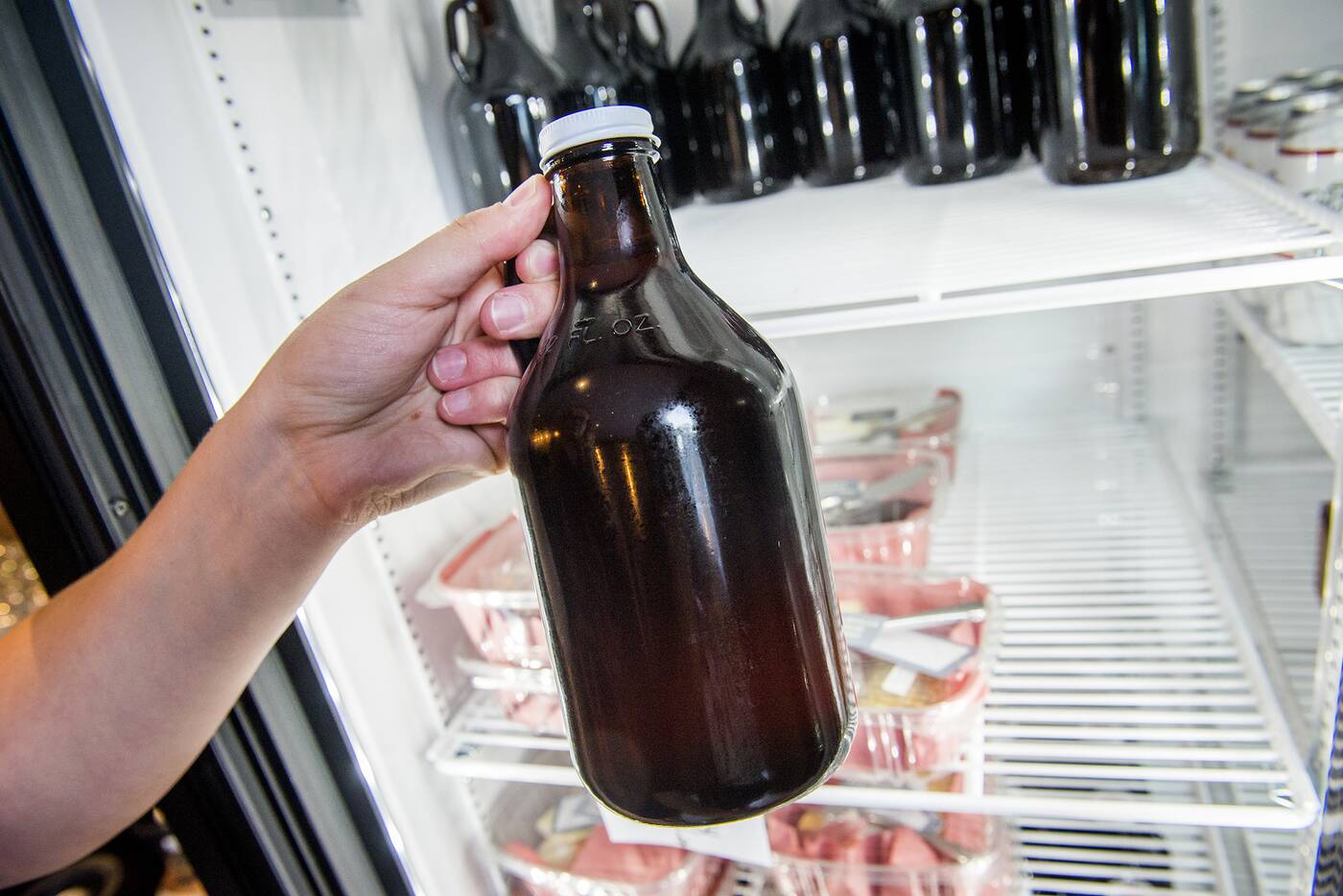 Howlers, basically smaller, easier to carry growlers are $5.50, just the pilsner available for take out for me. 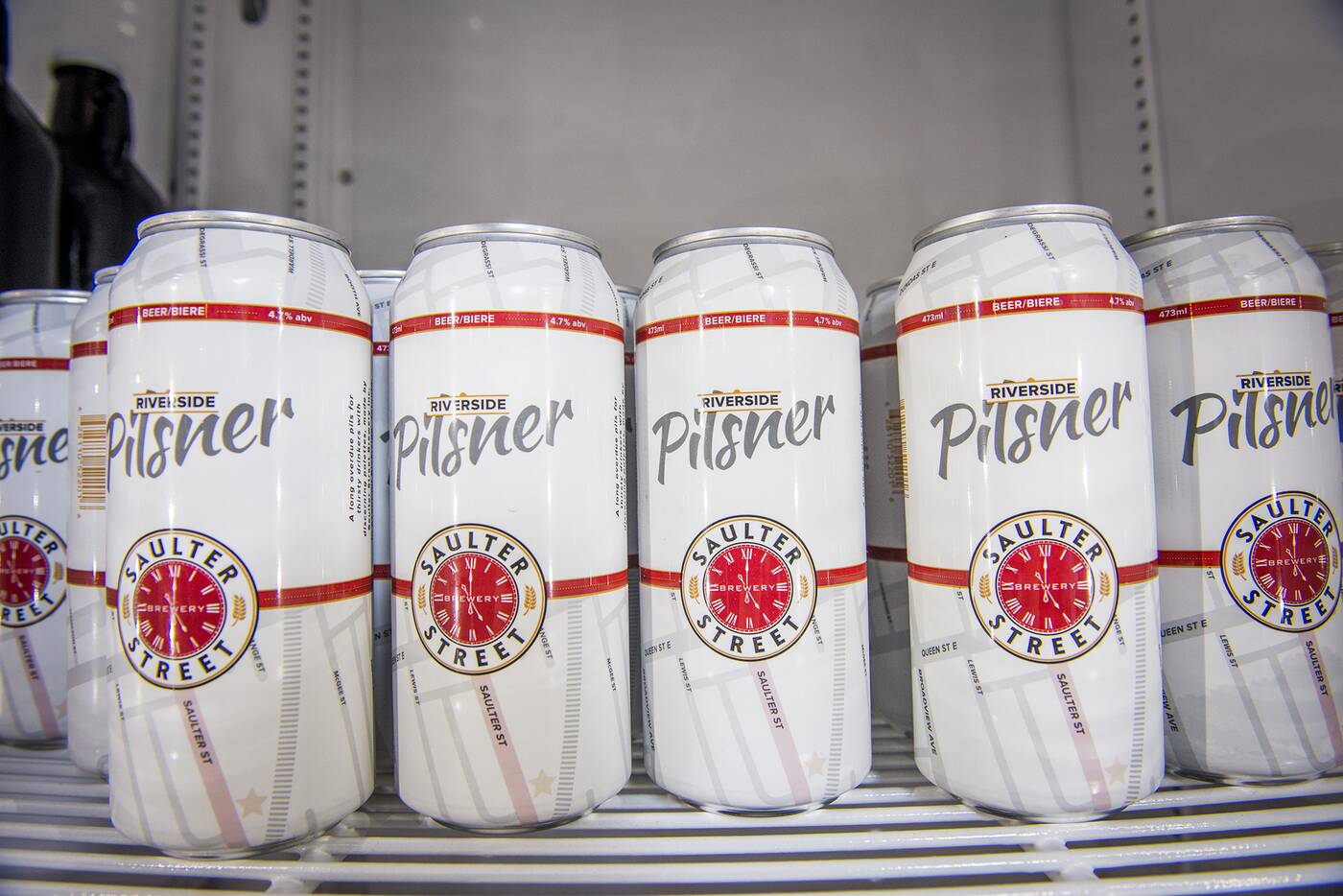 That didn’t stop me from picking up a couple sleek $2.90 tall cans. 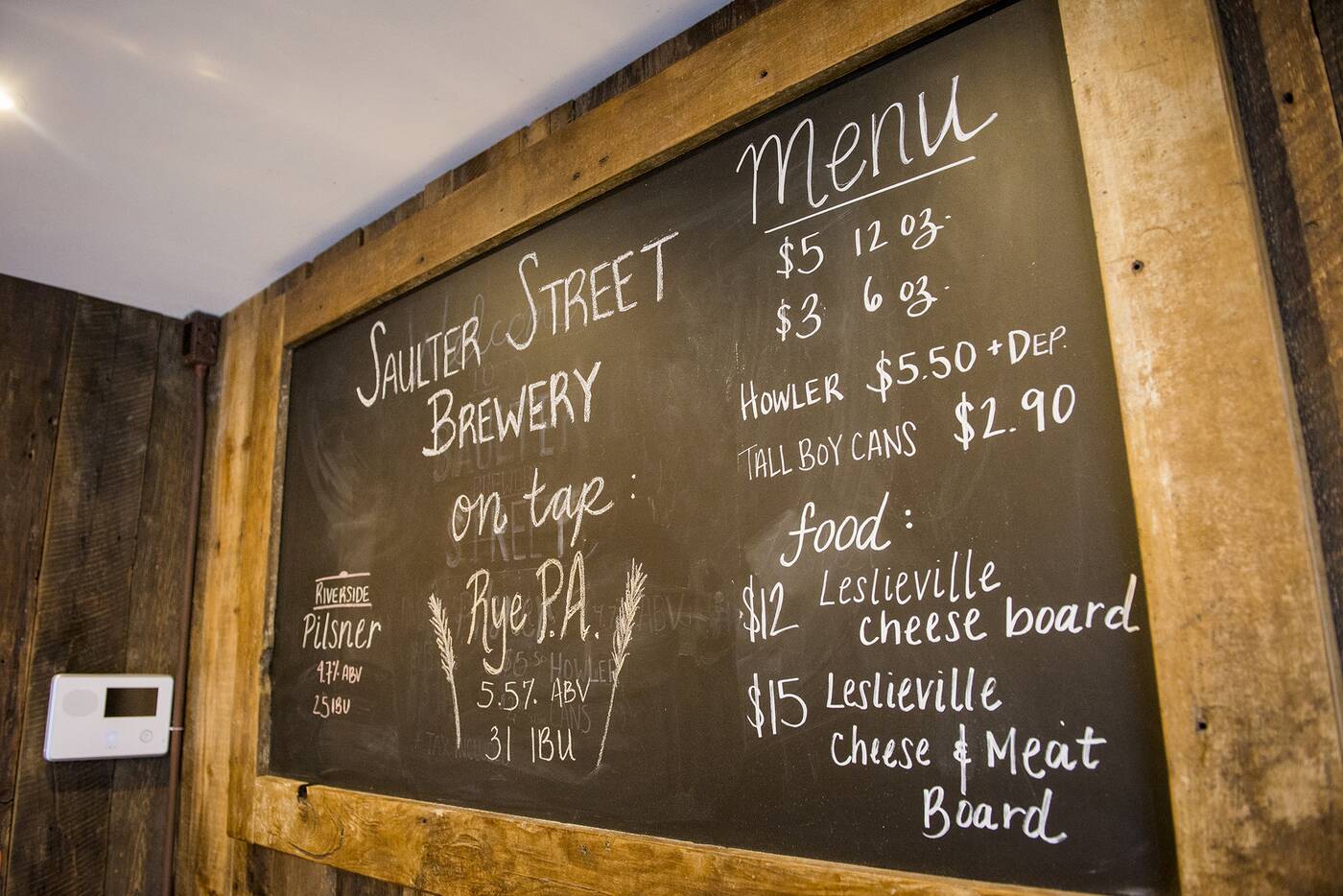 This neighbourhood bar is also especially baby and dog friendly. 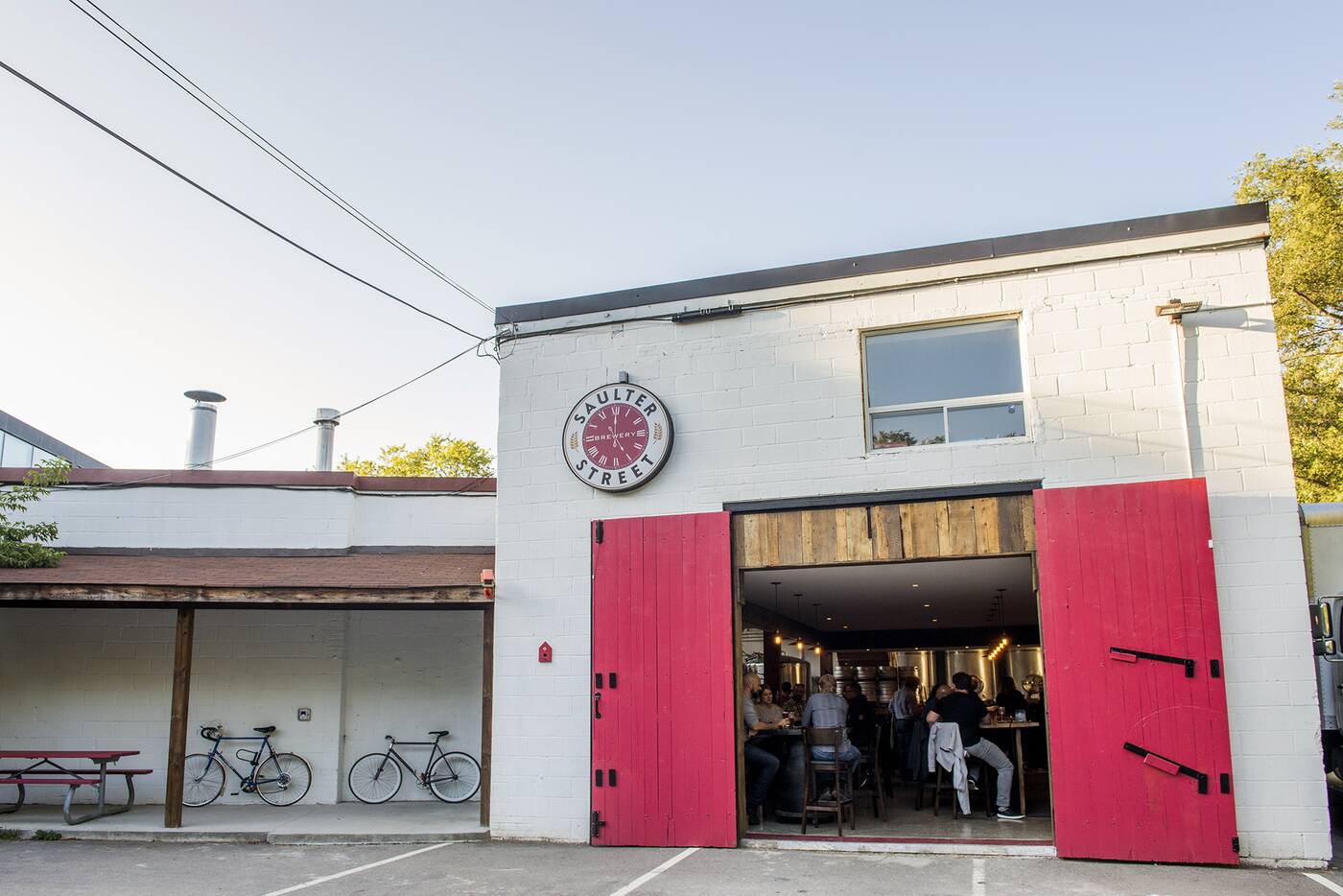