The top 40 cheap lunch in Toronto by neighbourhood

A cheap lunch in Toronto isn’t just fuel to keep you going, it can be a midday oasis that improves your whole outlook on the rest of the afternoon. Whether you forgot to make your lunch, didn’t have time or just hate doing it altogether, these are some places you can head for lunch that are both yummy and easy on the wallet.

Here are my picks for the top cheap lunches in Toronto by neighbourhood.

Tacos are $4 each or four for $13 at Bang Bang Burrito, making it one of the best deals on tacos in the city in this neighbourhood.

Annie’s Cuisine is this neighbourhood’s spot for cheap Caribbean, with classic options like jerk chicken and curry goat topping out at under $10.

Pretty much every bowl of Kinton Ramen’s nominal standby dish is $12.99 at this location of a chain with spots throughout the city.

While you can get some of the craziest burgers with grilled cheese buns, chili and cheese-stuffed mushrooms at Burger’s Priest, standard cheeseburgers are still also just $6.29 here. 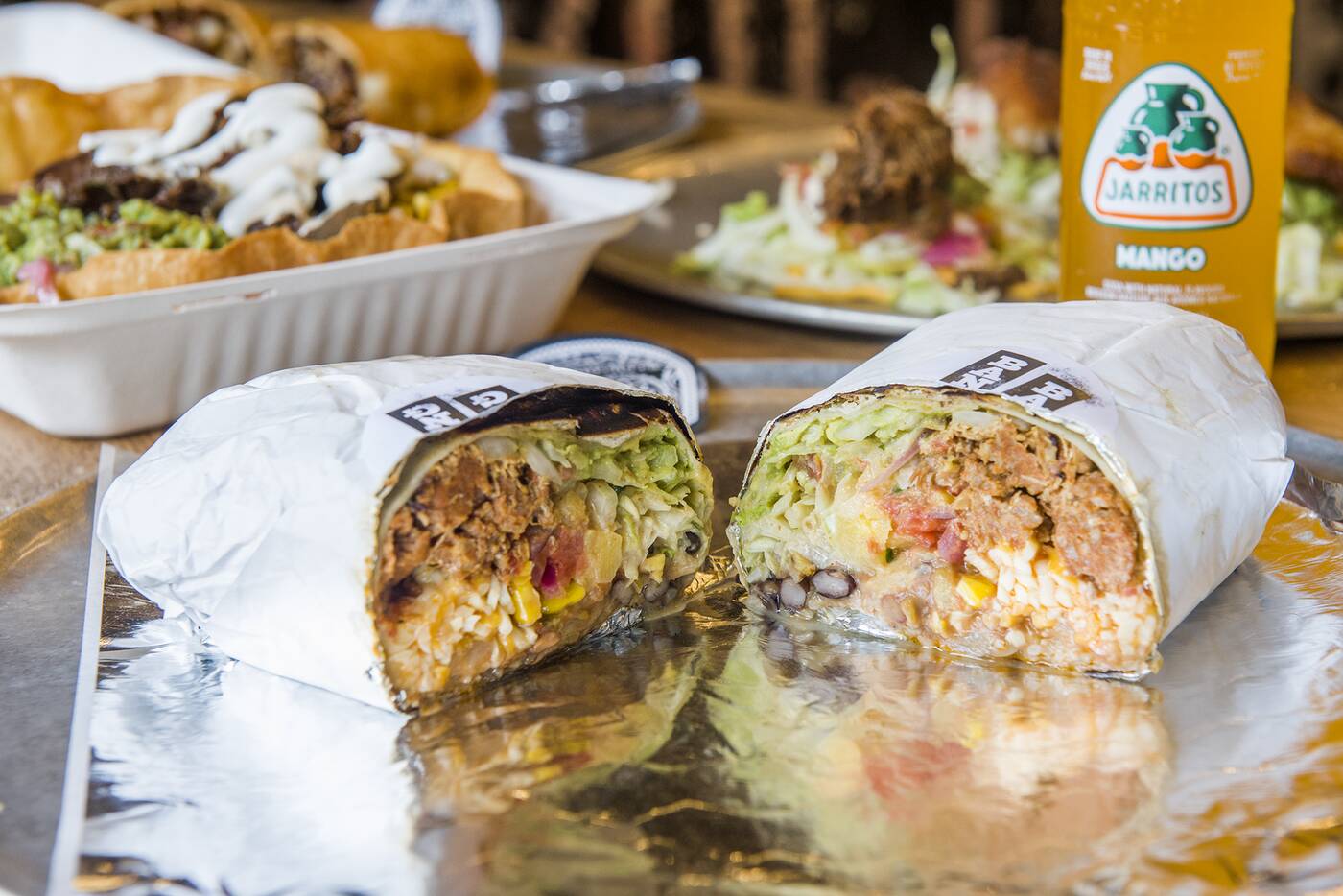 Fill up on burritos at Bang Bang in the Annex. Photo by Hector Vasquez.

Prices are low across the board at Cinderella, situated right at the entrance to Dufferin subway station, with falafel sandwiches for just $3.99, chicken shawarma sandwiches for $5.49.

Chito’s Pizza is the best when it comes to great lunchtime deals, large pizzas going for just $9.50 (though I personally recommend the shawarma pizza for $15).

If you’re really looking to fill up for cheap, Pho Linh is the place to go. Humongous XL bowls of their legendary beef rice noodle soup are around $8.50.

You can take out or dine in at Souk Tabule where Middle Eastern mezza like falafel and hummus hover around $6.50.

Open 24 hours, Commisso Brothers has a hot table where pretty much everything is under $10 including their renowned veal sandwiches.

Boiled, steamed or pan-fried, Mother’s Dumplings are all around $10, steamed buns around $5. 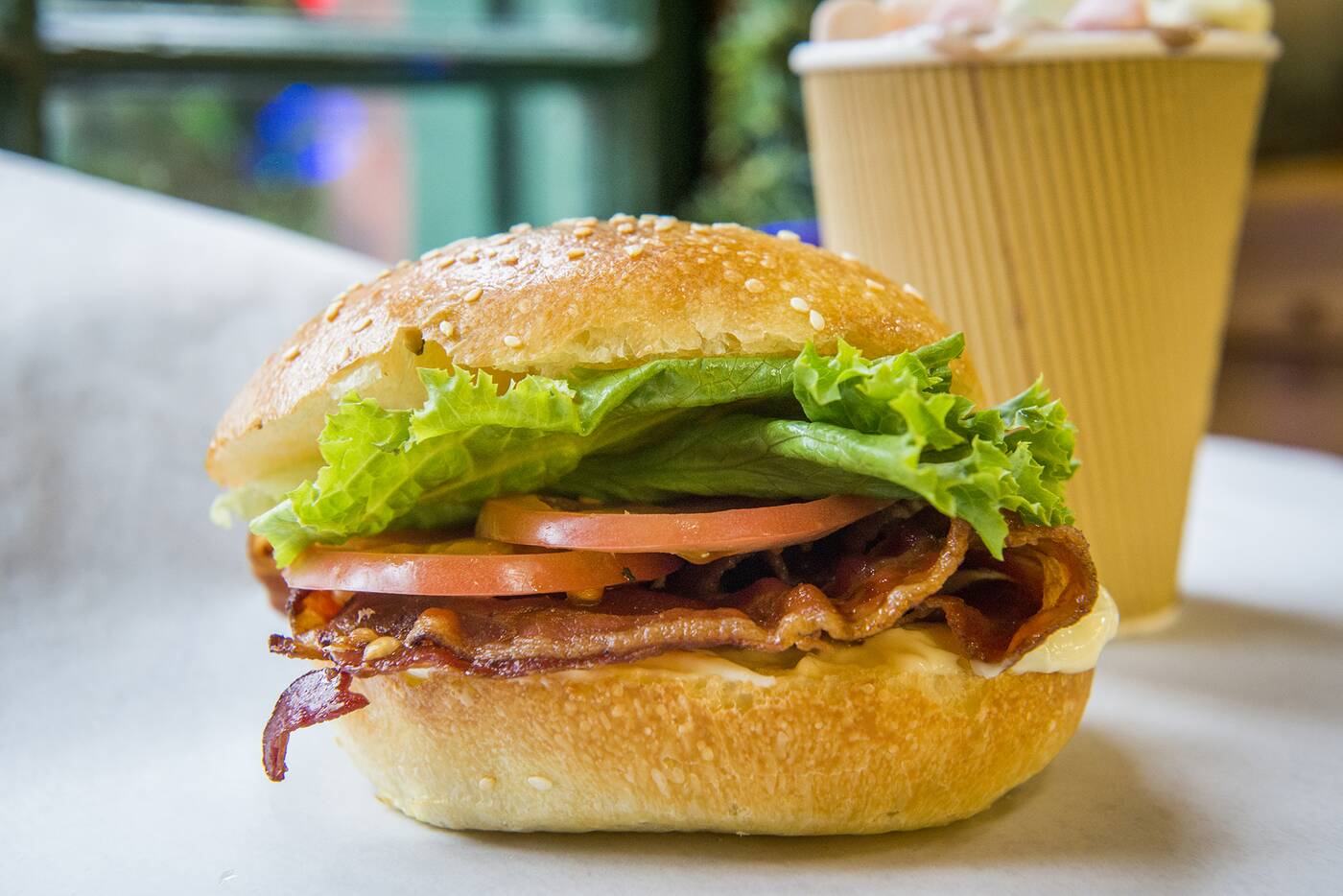 The BLT is a popular option at Brick St. Bakery in the Distillery District. Photos by Hector Vasquez.

A variety of around a dozen veggie rotis at Indian Roti House go for around $10, including favourites like saag paneer.

Sandwiches and pasta at Centro Trattori & Formaggi will cost you just over five bucks for a taste of homestyle Italian cooking.

Though recognized as one of Toronto’s best ramen spots, bowls of soup at Ryus Noodle Bar average out around $14.

A great BLT can be found at Brick Street Bakery for just $5.50, other sandwiches going for under $10 and sausage rolls for $3.50.

A host of great cheap options can be found at Market 707, a series of shipping containers converted into stalls selling poutine, meat pies, and grilled cheese. 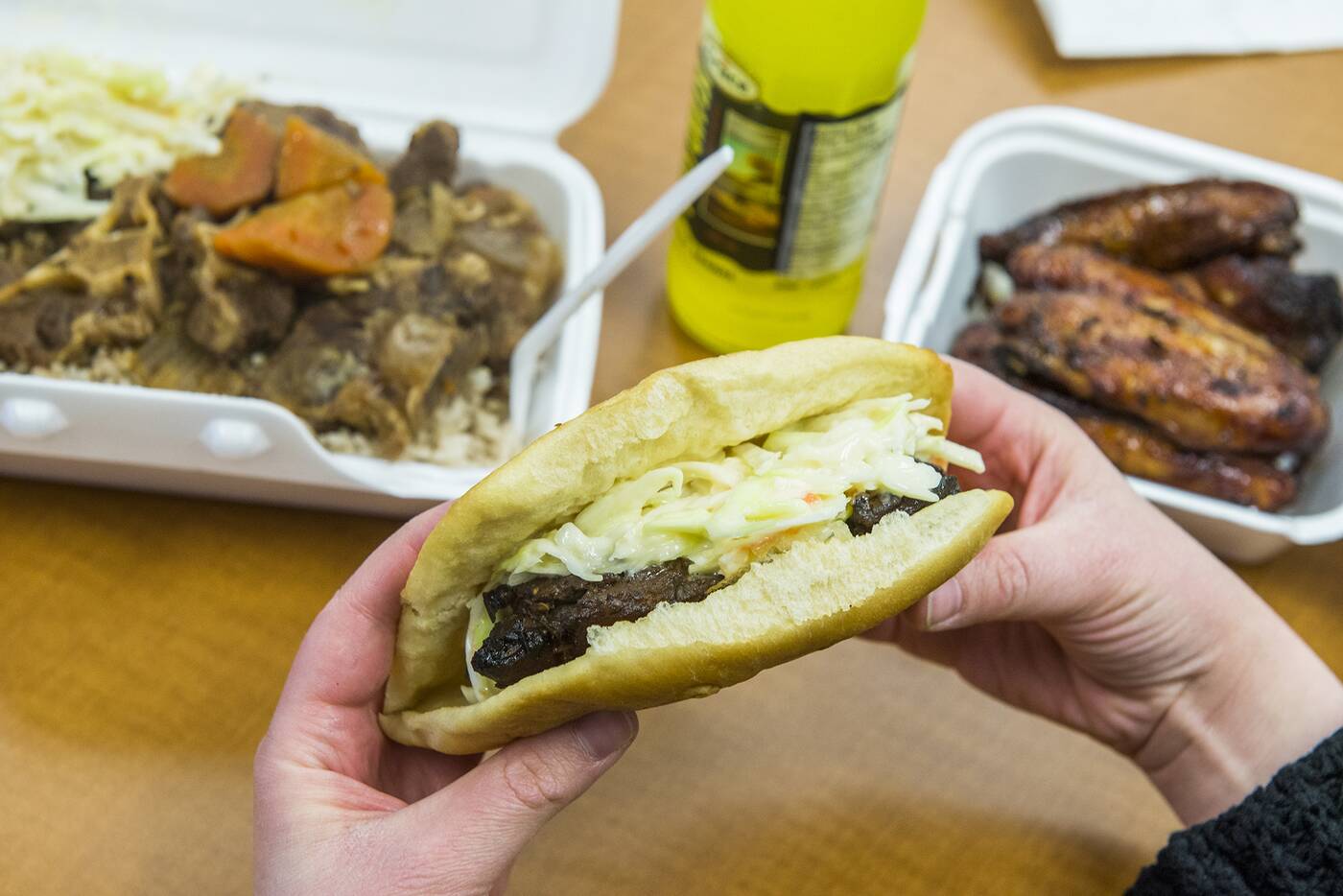 Illstyl3 Sammies does epic sandwiches like Philly cheesesteaks for under $10, and they do hoagies and breakfast sammies for similar prices.

Mrakovic Deli will load up a plate with house cevapi and a bun for $10, with the traditional accompaniments of onion, ajvar and kaymak.

Classic salads from Greek to Nicoise and tabouleh to Caesar are all just $8.99 at Mam Green Salad.

It’s not the cheapest peameal sandwich in the city, but considering the version at When the Pig Came Home comes topped with kale and maple aioli, $5 is a great deal.

Hot, cheesy Italian sandwiches too big to get your mouth around are still around or under $7 at Nonna’s. 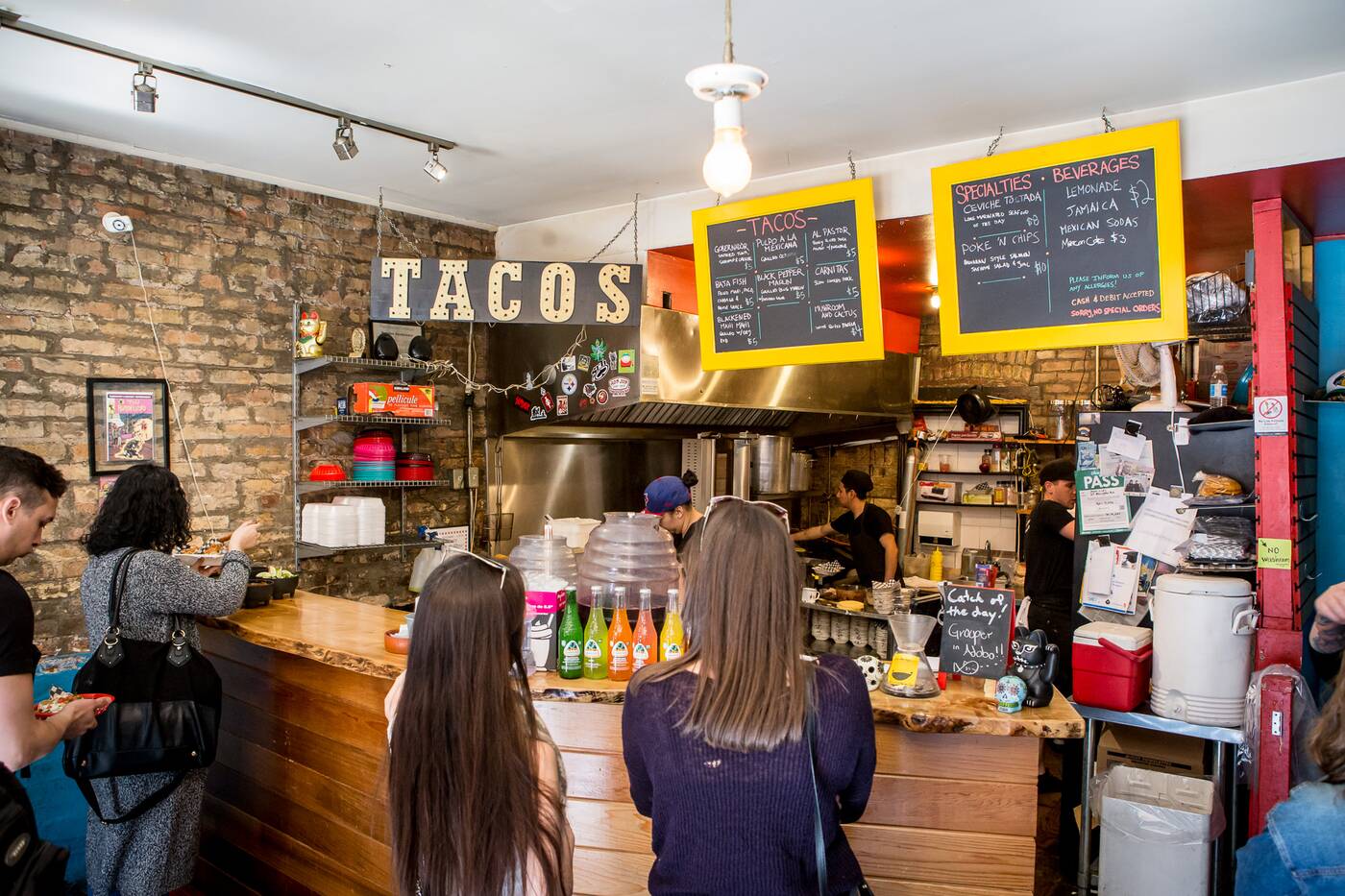 The fish tacos can't be beat at Seven Lives in Kensington Market. Photo by Jesse Milns.

Though the tacos at Seven Lives are filled with high-end seafood like grilled mahi mahi, spicy shrimp and smoked tuna, they’re still only $5 each.

A “basic” grilled cheese with aged cheddar and mozzarella, house hot sauce and roasted red pepper sauce is just $5 at Completo. Tacos come in orders of three for just $9.

Textbook smash burgers are just $6.50 at Rudy, poutine and chicken sandwiches going for $7.50.

Nothing is better than a good old sandwich at community-oriented Lazy Daisy’s Cafe, options like BLTs, burritos and grilled cheeses going for around $10.

A small order of fried chicken is $8.50 at Judy’s Island Grill, $10 for small orders of brown stew chicken or BBQ chicken. 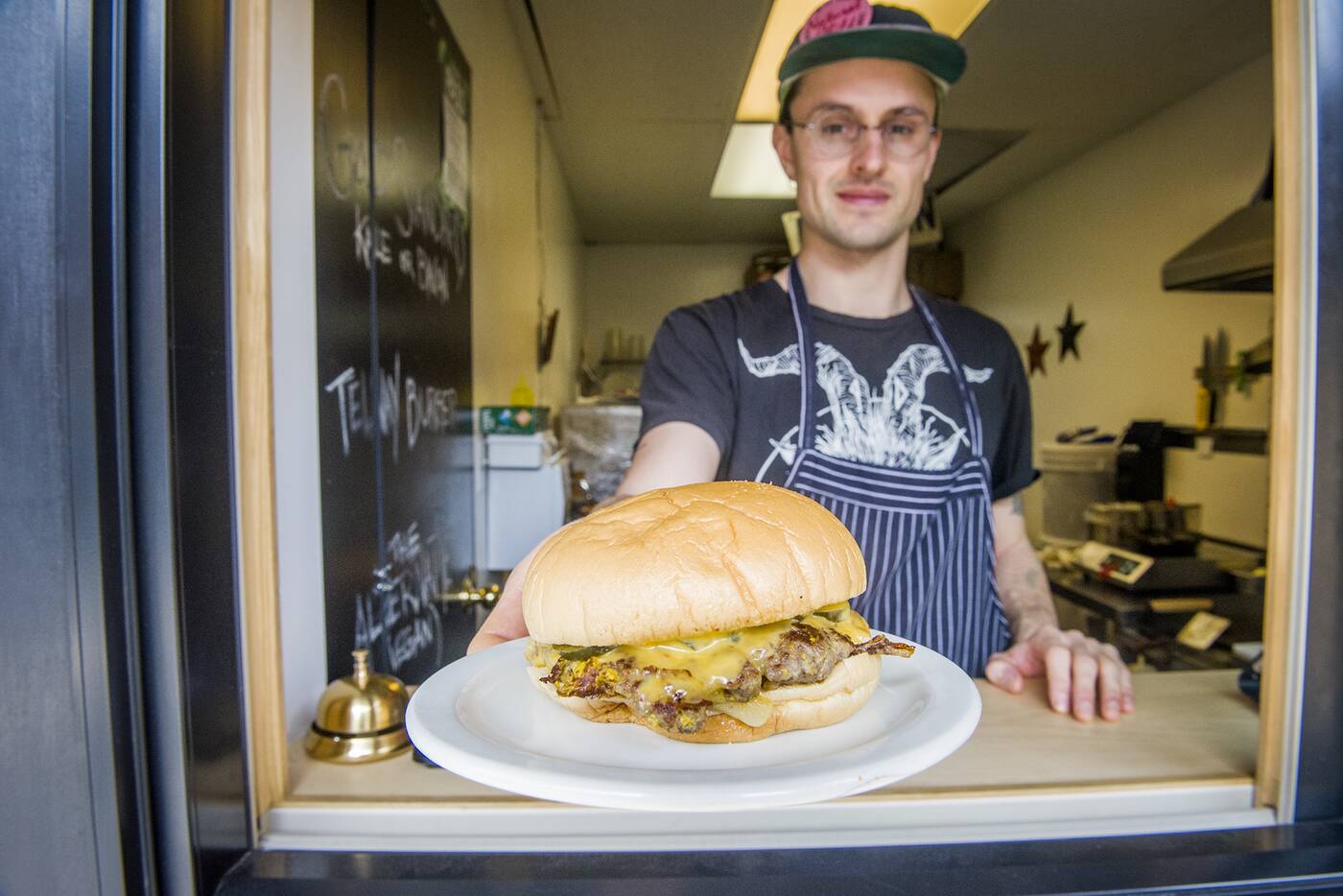 Tibetan bento boxes are $8.99 at Yak Cafe and Indian-style thali meals are $7.99. Both allow you to sample a lot of different little items for less.

There are only three sandwiches on the menu at Gold Standard, including a breakfast sandwich and a burger, and they’re all gloriously $6.

The go-to half grilled chicken at St. Matthew’s BBQ Chicken is $6. For $5 more you can get it with the standby accompaniments of rice and potatoes

Just try finishing a roti from Gandhi Roti in one sitting—you probably won’t be able to, despite the fact that vegan rotis all cost under $10.

Black Camel sandwiches stuffed with a mountain of slow-cooked meat such as pulled pork, brisket or pulled chicken are under $10. 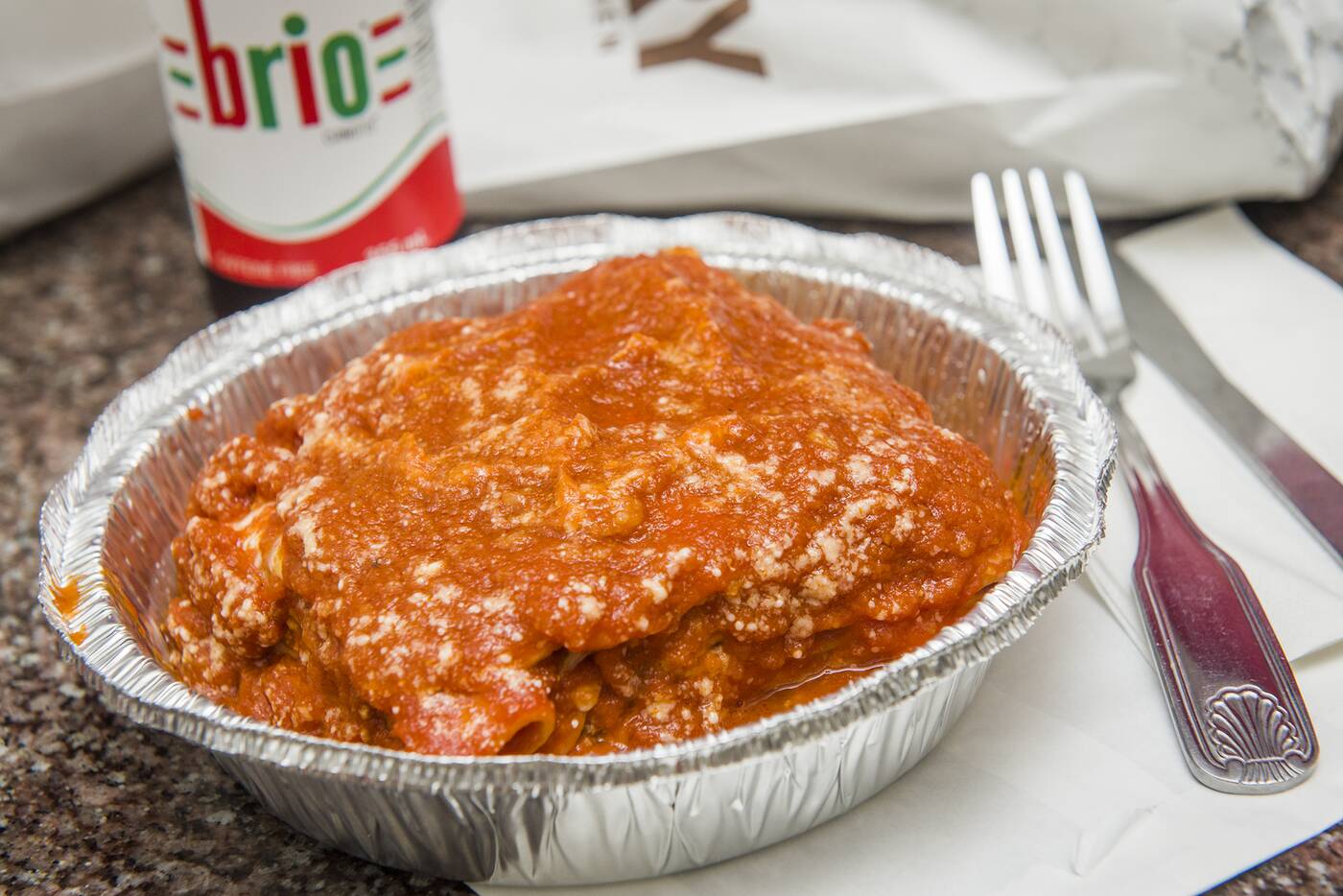 Lasagna makes for a cheap lunch at Agincourt Bakery in Scarborough. Photo by Hector Vasquez.

At Agincourt Bakery, the $6 veal sandwich and $7 meatball sandwich are both almost too big and sloppy to finish in one sitting, and it’s a similar story with lasagna for $7 as well.

Harbour Eats by Mercatino provides a budget-friendly option for office workers with stations providing tacos, sushi, poke bowls, sandwiches and more all for around $10.

Simplistic peameal bacon sandwiches at Carousel are already iconic, their popularity only improved by a $6.45 price tag.

Tacos are $5, huevos dishes are $10 and tostadas are under $10 at Tenoch, home to great value and some of Toronto’s meatiest sandwiches.

Beef or chicken patties are just $2 at Ritz Caribbean, and there’s always a $5.99 lunch special. 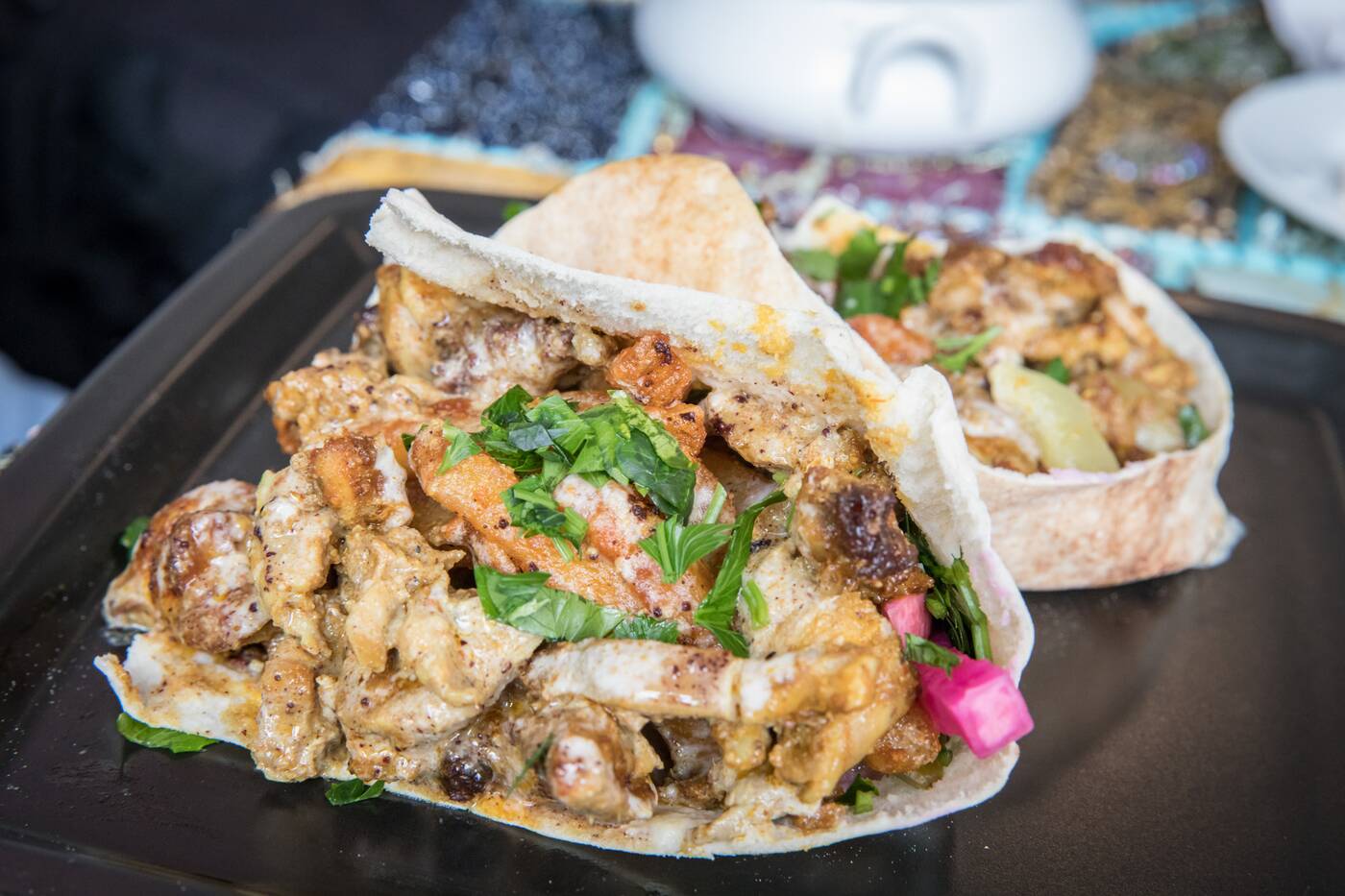 Shawarma doesn't get much better than the rendition at Zezafoun near Yonge and Eglinton. Photo by Jesse Milns.

Falafel wraps are $6.40 and chicken shawarma wraps are $8.45 every day at Zezafoun, where they also do rotating Syrian lunches for $11.95.

Burgers get pretty zany at Holy Chuck but an old-fashioned cheeseburger from here is well-priced for the quality at $9.49.

Kebaberie has chicken, beef or veggie kebab sandwiches and chicken or beef shawarma sandwiches for under $10.