Lazy Daisy's Cafe is currently open but their offerings and services may be affected due to the pandemic. Please contact the business directly for more information about any changes. Is this your business? Please contact us if you would like to update this message.

Lazy Daisy's proves that if there is such a thing as "farmhouse-chic," it can be a great environment in which to curl up with a coffee and some homemade soup.The name "Daisy," for some reason, has always been appropriated to our bovine friends in my mind, so I was not surprised to see her pretty speckled face around the new cafe at Coxwell and Gerrard. The shop is certainly unlike many of its neighbours, sitting on the cusp of Little India to the west and not a whole lot heading in the other direction. Owner Dawn Chapman tells me she gutted the former shawarma space after signing on, revamping it with little touches from the farm where she spent many of her childhood summers. 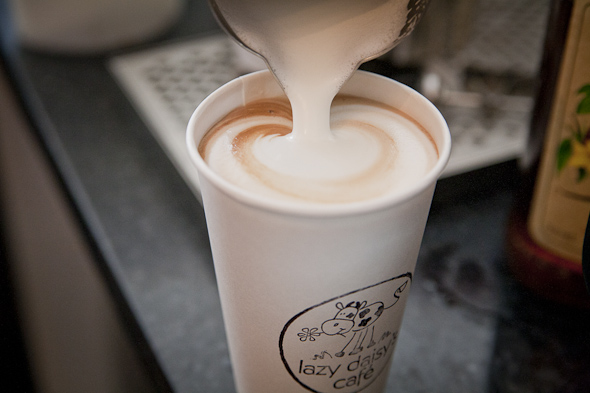 "Daisy was the cow at my uncle's farm," she tells me as we settle in a pair of black armchairs. "And it was the real deal; we milked her, carried the pail, we drank the milk. There was a natural way of doing things, and that's what I wanted for this space." 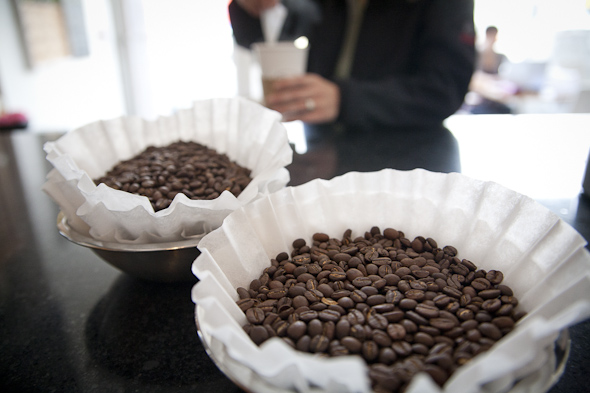 The new cafe borrows more than just the name of a cow from Dawn's uncle's farm. The tabletops, for example, are actually made from wood from an old barn on the land (and outfitted with stainless steel bases, hence "farmhouse-chic." In fact, most everything in the cafe--from the cucumbers in its salads, to the pottery bowls for its chili--can be traced to some town nearby in Ontario, mapped on a board by the front entrance. The display also features a local farmer's bio, which, for now, tells the story of Dawn's own uncle. 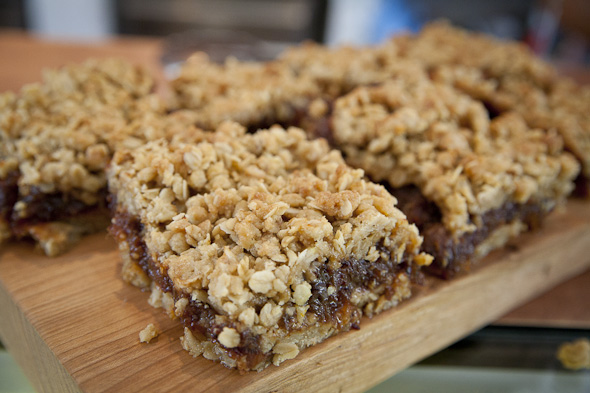 "I want this place to be about respect for animals, and respect for your bodies," Dawn says as her two kids play at the train table near the back. "Instead of putting lots of junk in your body, you can put less, and better." Dawn tells me she and the other moms in the area longed for a place for good coffee and good food, and since she had opened a couple of bagel shops in London, England, in her twenties, Dawn thought she would be the one to do something similar for Gerrard East. 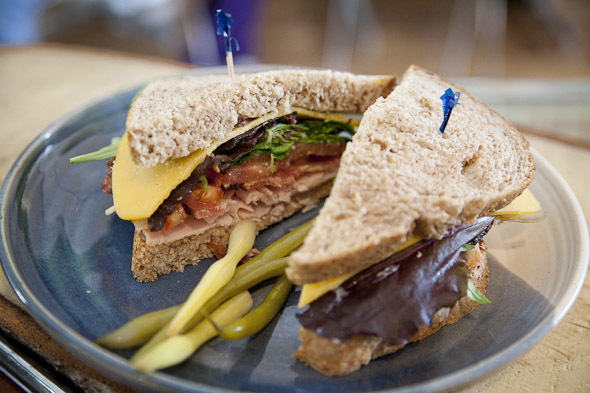 Far from the typical cookie and muffin cafĂŠ, Lazy Daisy's menu includes everything from pastrami sandwiches ($7.95) made with organic, hormone-free meat from Beretta Farms and bread from Knead Bakery , its "Wandering Oeuf" breakfast sandwich ($4.95) made with free-range eggs, double-smoked bacon, and a fresh Knead Bakery biscuit, and its house-made signature chili ($8.75) served with a jalapeĂąo whoopie pie, of all things. 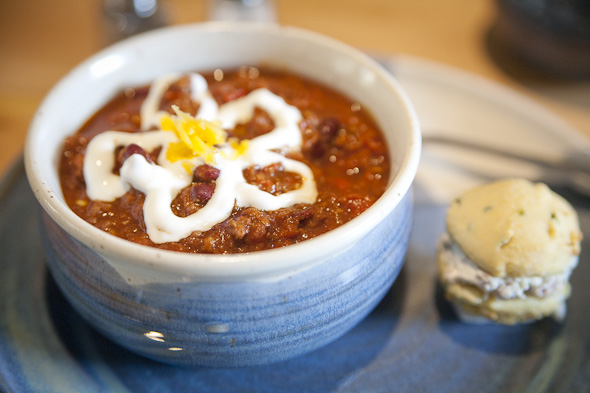 With the chef working away in the kitchen, one of the friendly baristas insisted I try a spoonful of chili, which was hearty, delicious, and totally homestyle. Next I was made to try some of its house-made signature jam (a whole range of varieties, also jarred and ready to go) spread over a lightly toasted St. Urbain bagel. Raspberry-chocolate, and wonderful. 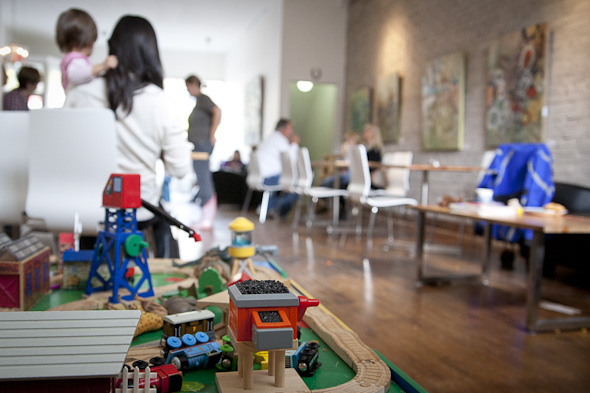 But alas, Lazy Daisy's is still a coffee shop, so I ordered a latte, which I was told, is made with beans roasted at Te Aro . The drink was smooth and creamy, and topped with a heart. Truthfully, I was hoping for a cow in my latte art, but a form of that precision would be udderly impossible. Obviously I have Daisy on the brain. 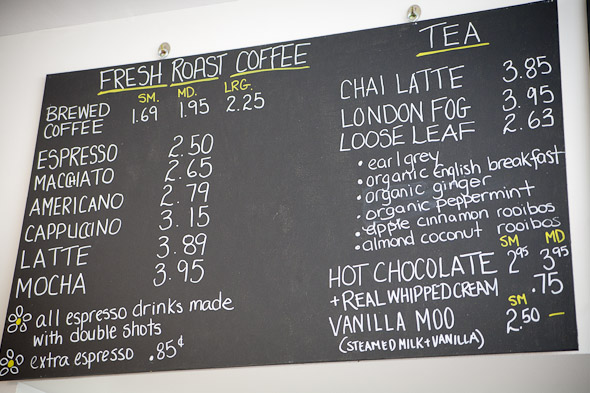 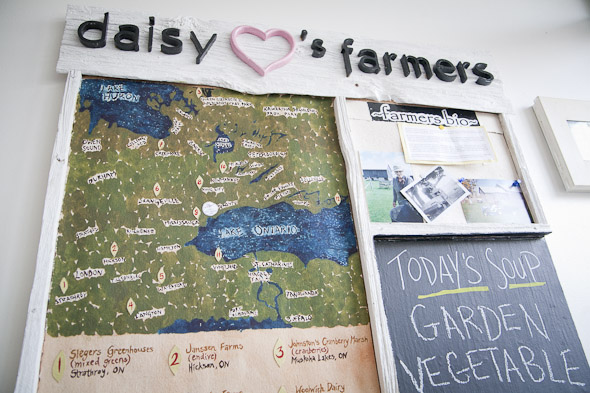 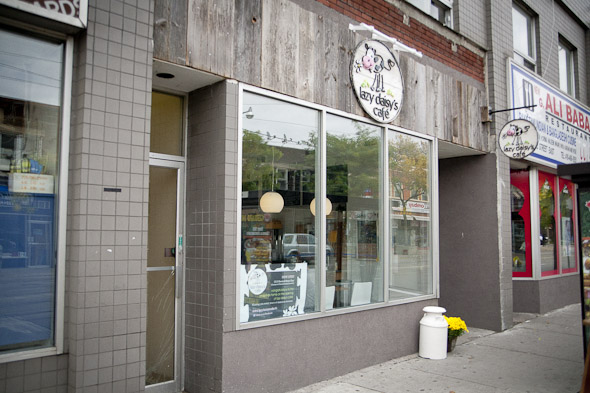