Carousel Bakery has been a Toronto institution for decades, and arguably serves the best version of a local invention, the peameal bacon sandwich. It was around when St. Lawrence Market was just one giant aisle, and survived the renovations of the seventies to remain a market mainstay to this day. 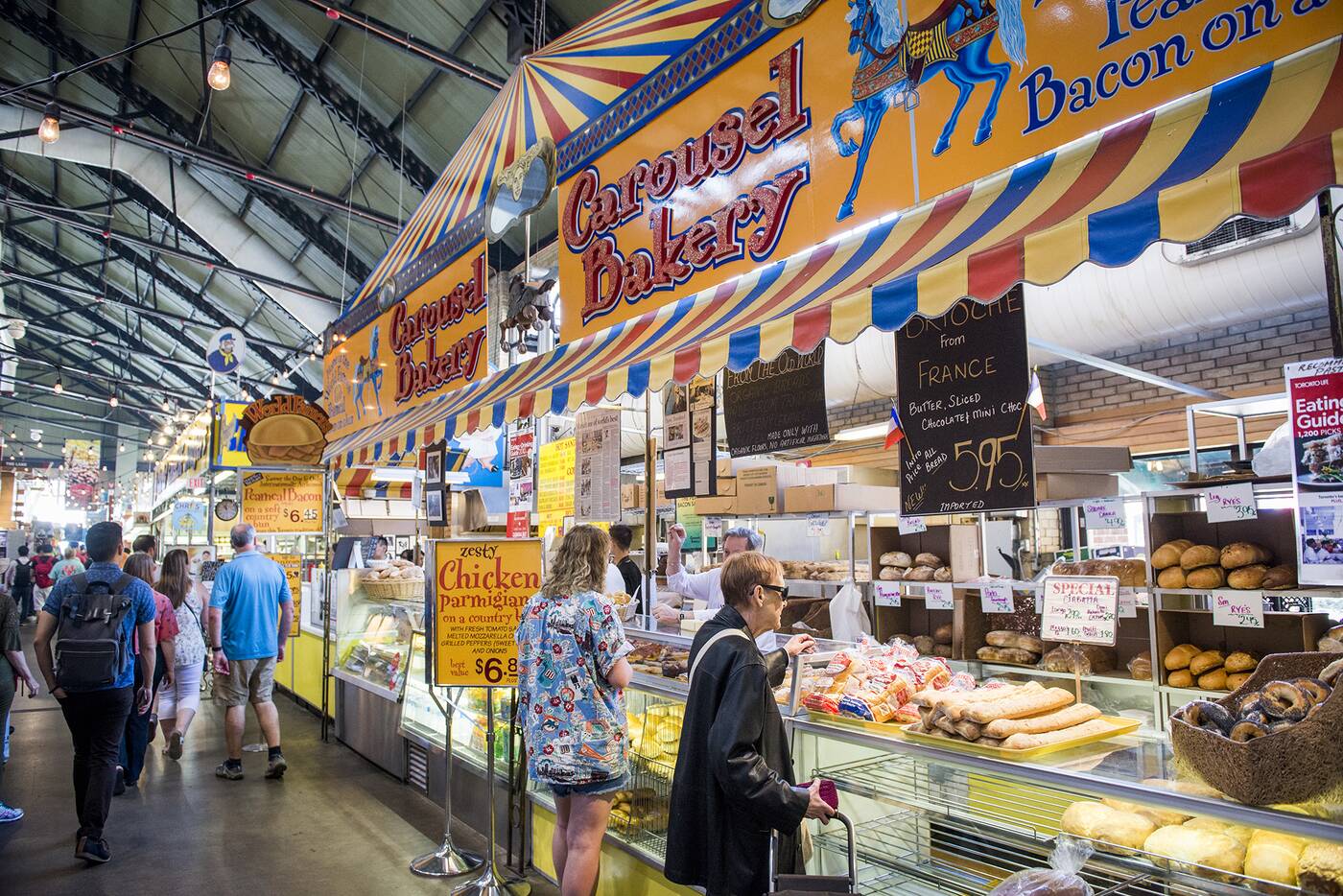 It’s run by brothers Maurice and Robert Biancolin, who took over from their father who started out in the butcher business and used to sell end cuts as peameal as a matter of efficiency. Nowadays massive slabs of peameal are made for them by a secret producer. 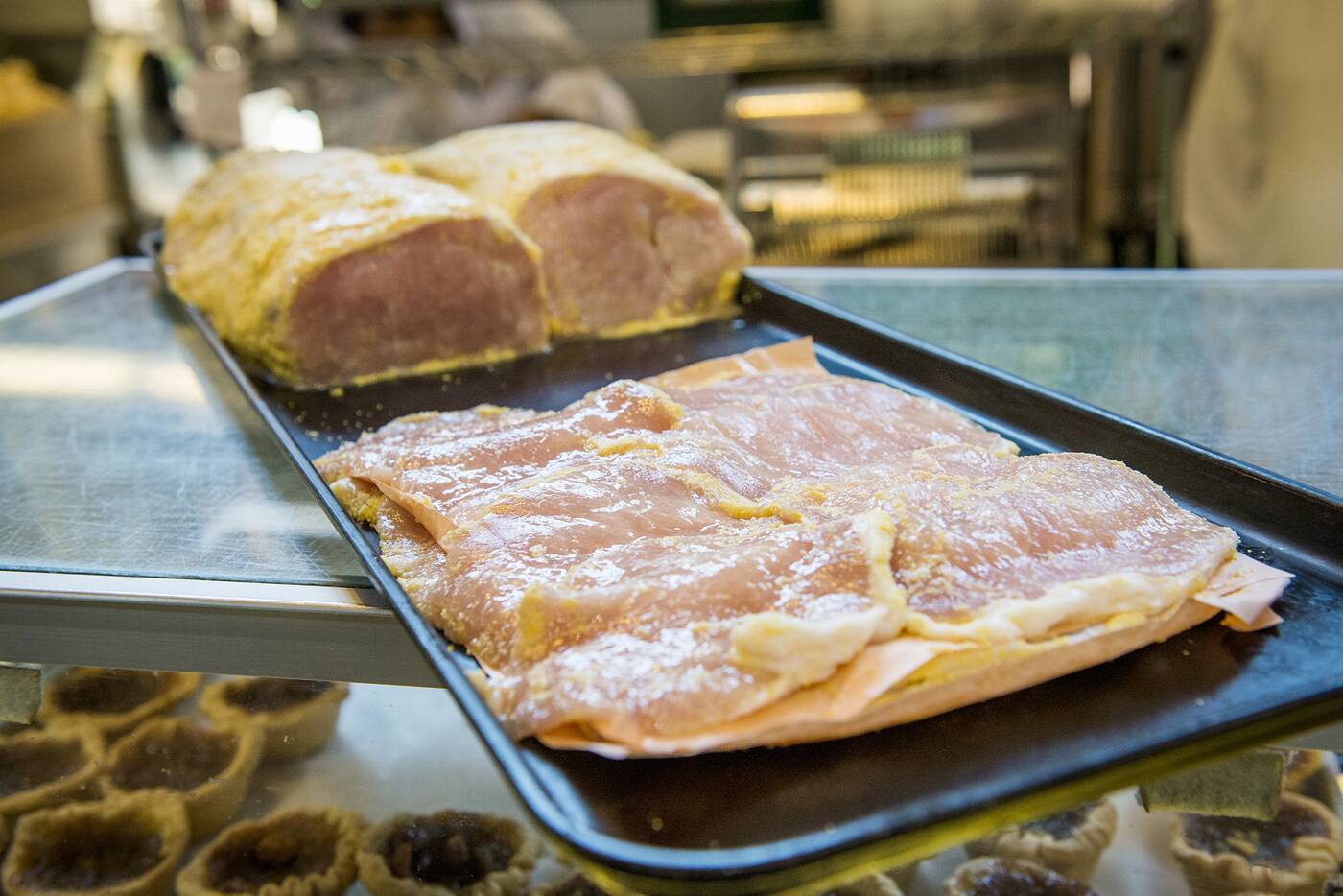 You need only take one look at the Carousel Bakery stall to understand their popularity. The area is plastered with rave after rave, articles and accolades dating back years and years. 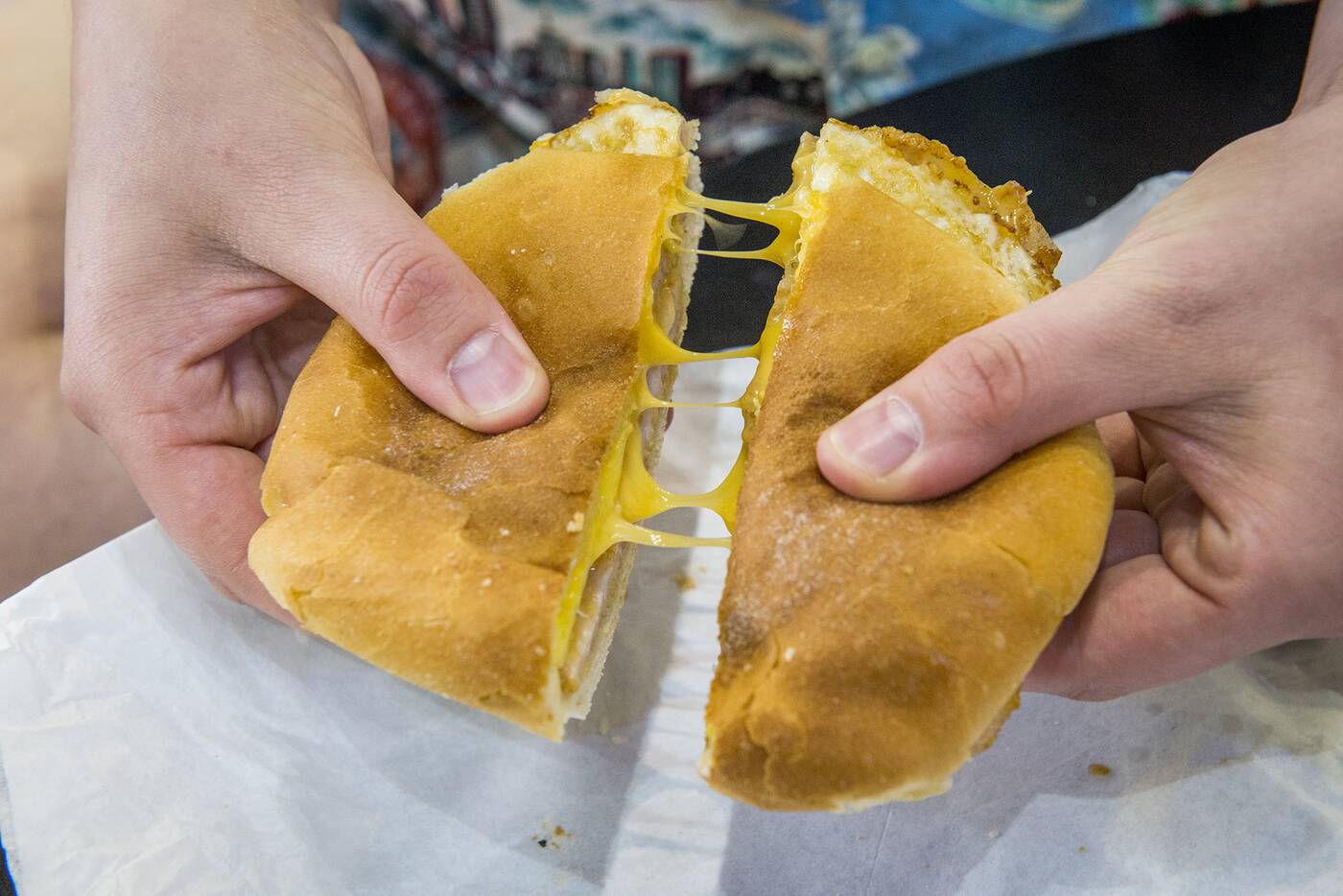 Arrive early to beat lines and also to indulge in their breakfast sandwich ($5.90), two lean slices of peameal bacon with a fried egg and melted American cheese on a puffy, crispy bun, only available until 11 a.m.. 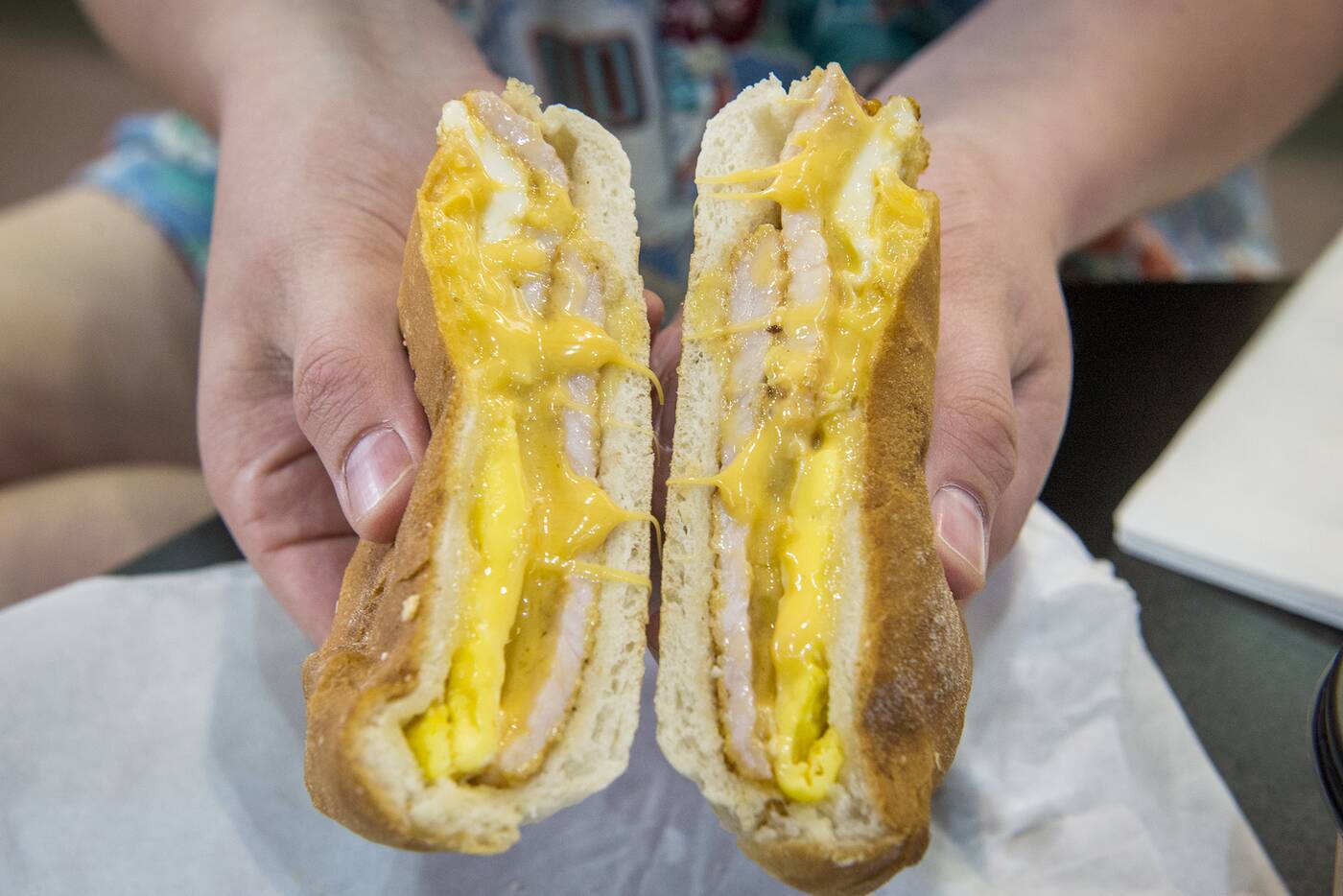 It’s an ooey gooey, cheesy, bacon-y and satisfying way to start the day.

The traditional peameal bacon sandwich ($6.45) doubles this portion with four slices of peameal on a bun and nothing else. 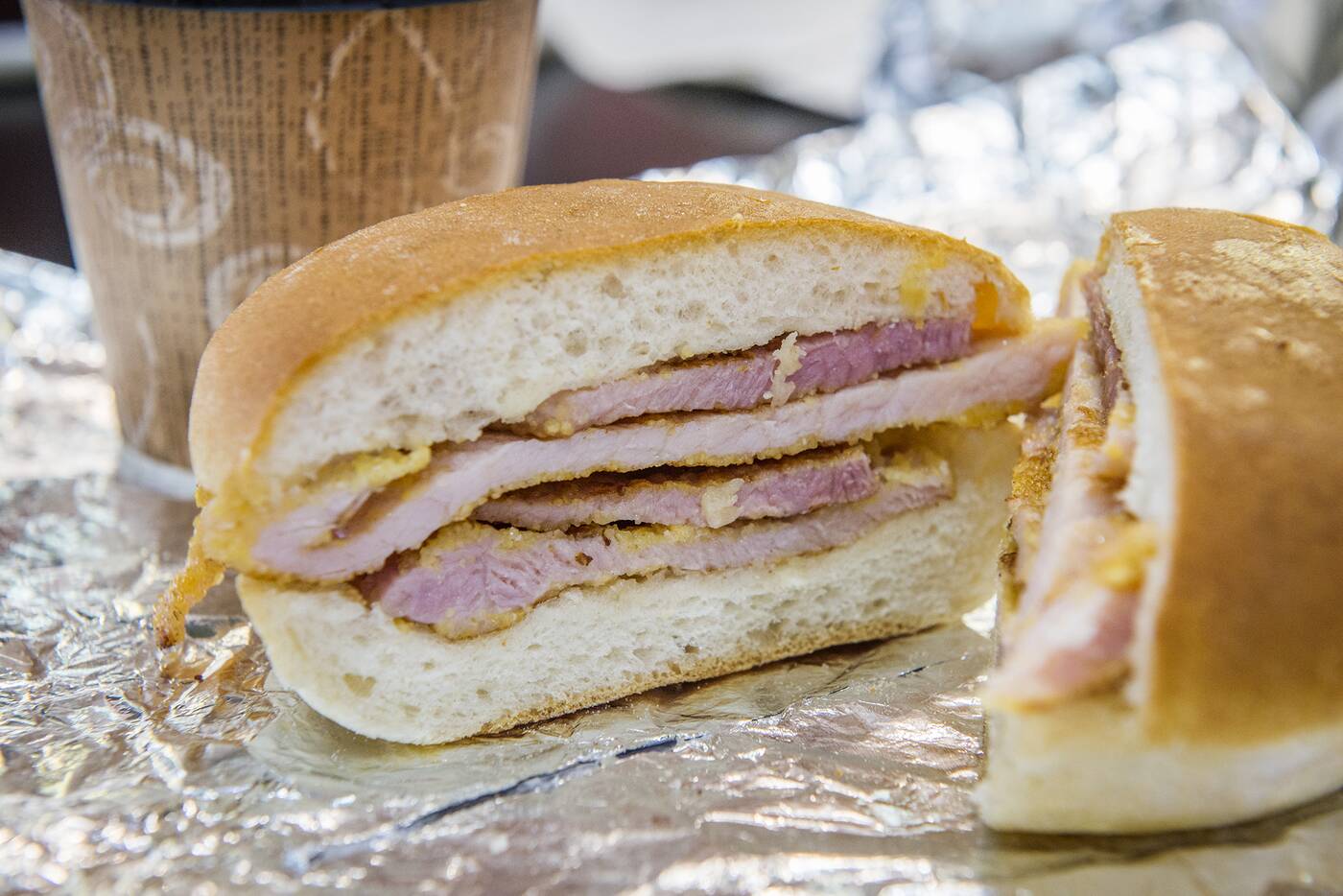 You’re welcome to unwrap the sandwich and add any of several provided mustards to it, but it’s equally good in this simple form, the meat juicy and flavourful enough to hold its own. 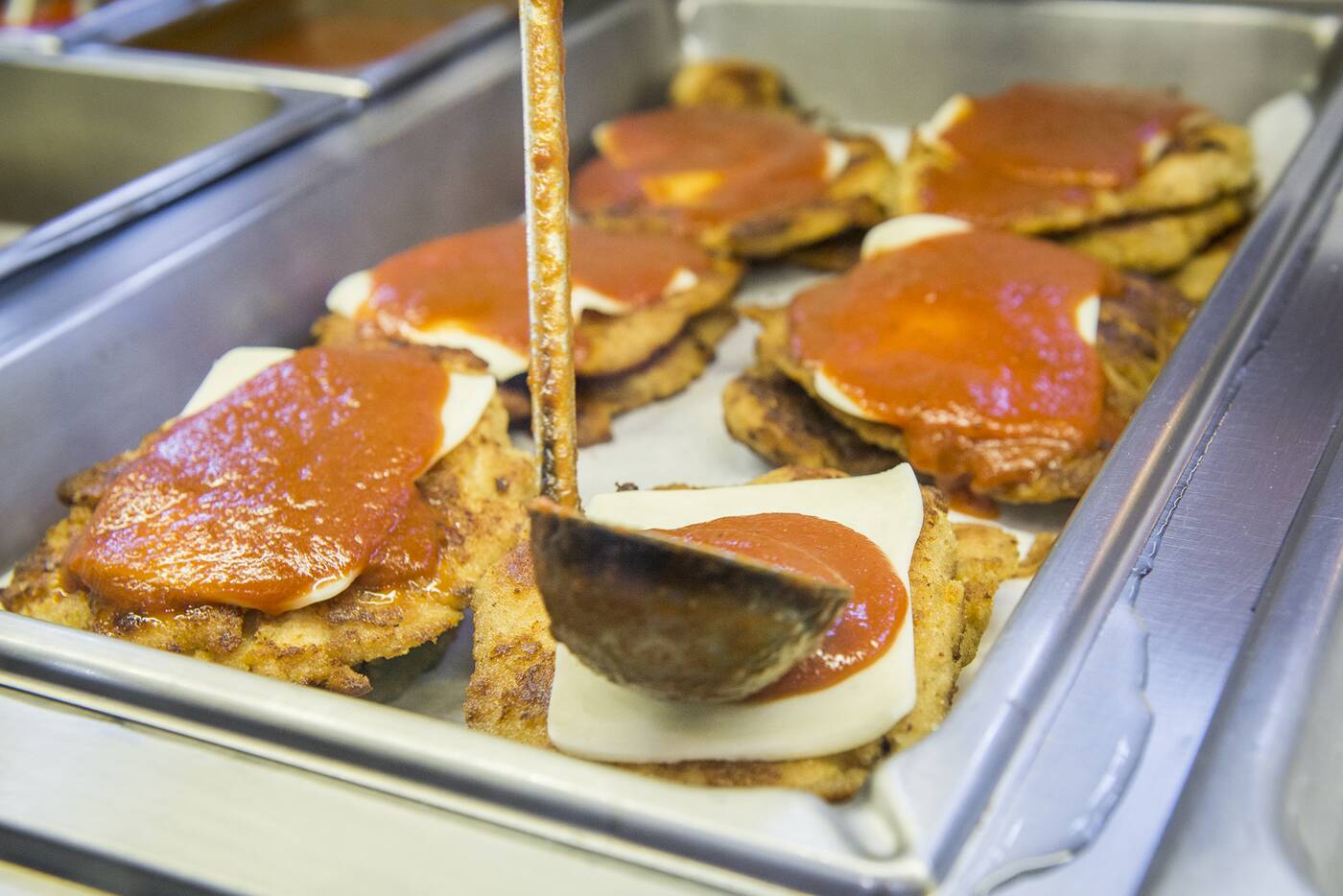 They also do chicken and veal parmigiana sandwiches ($6.85). 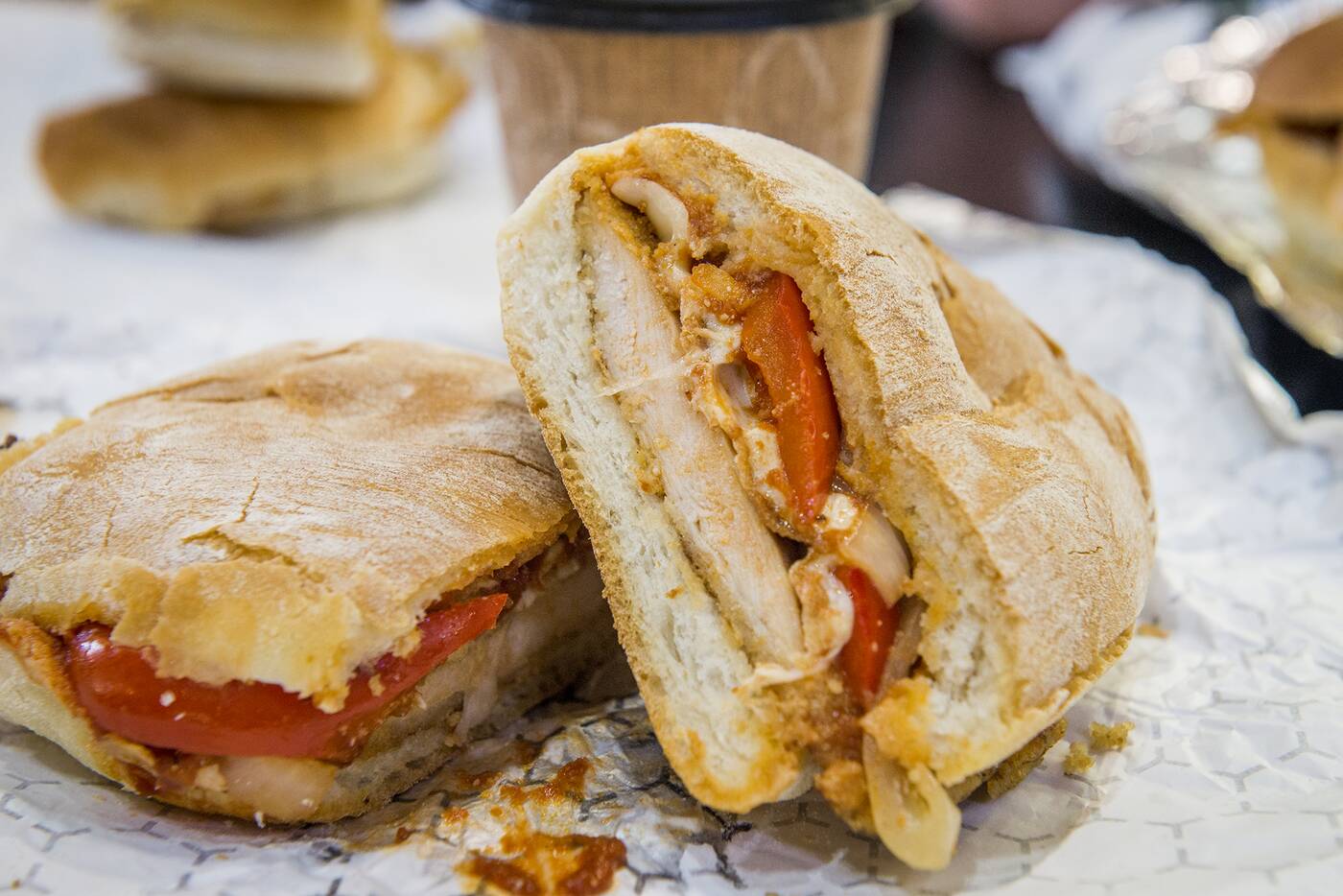 It’s true they may be known more for their peameal sandwiches rather than these, more in the arena of California Sandwiches, but they are still extremely good, saucy and cheesy with a crisp breading. 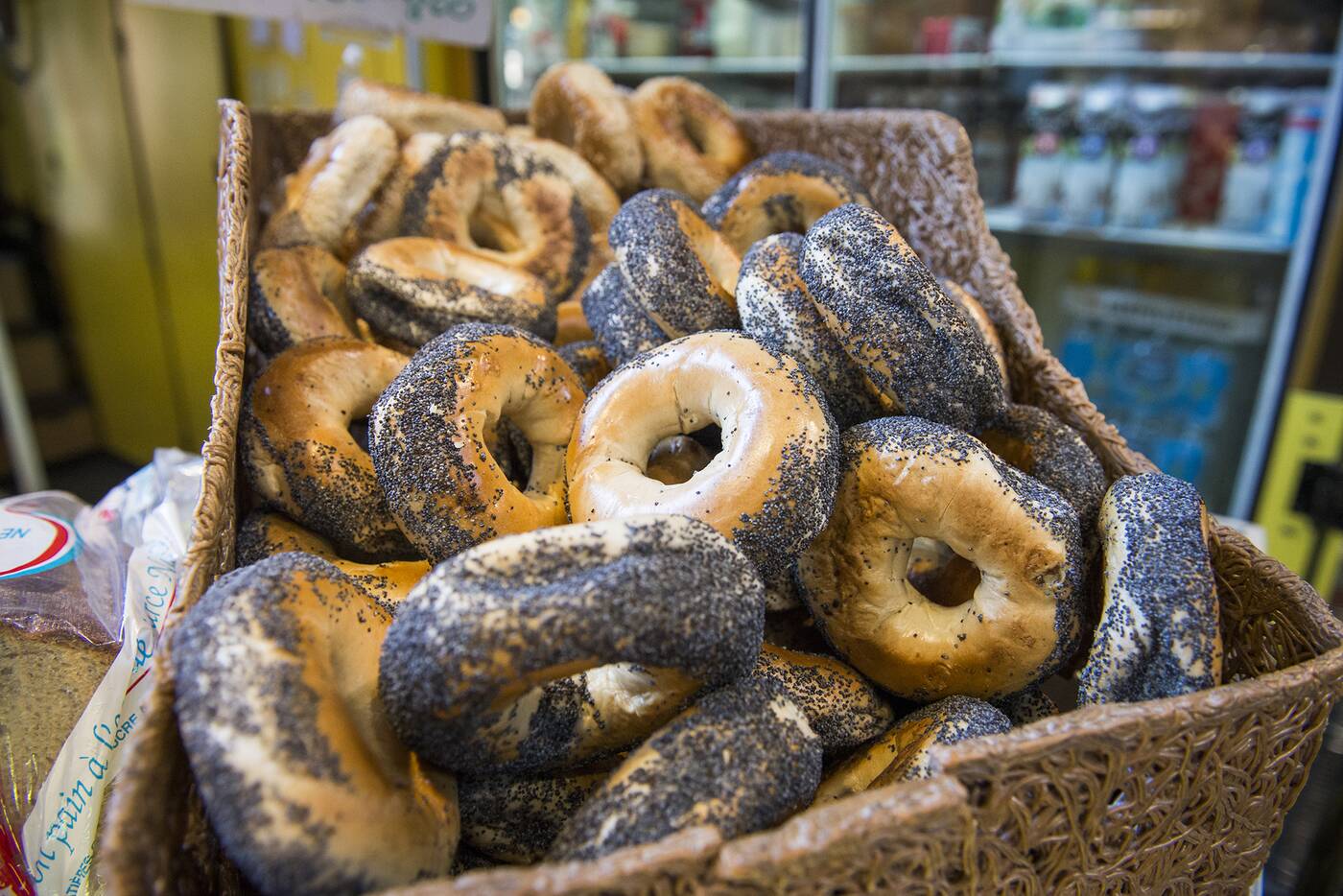 They not only sell ready-made items but a variety of baked goods as well, including Montreal-style bagels (85 cents each or a half dozen for $4.50. 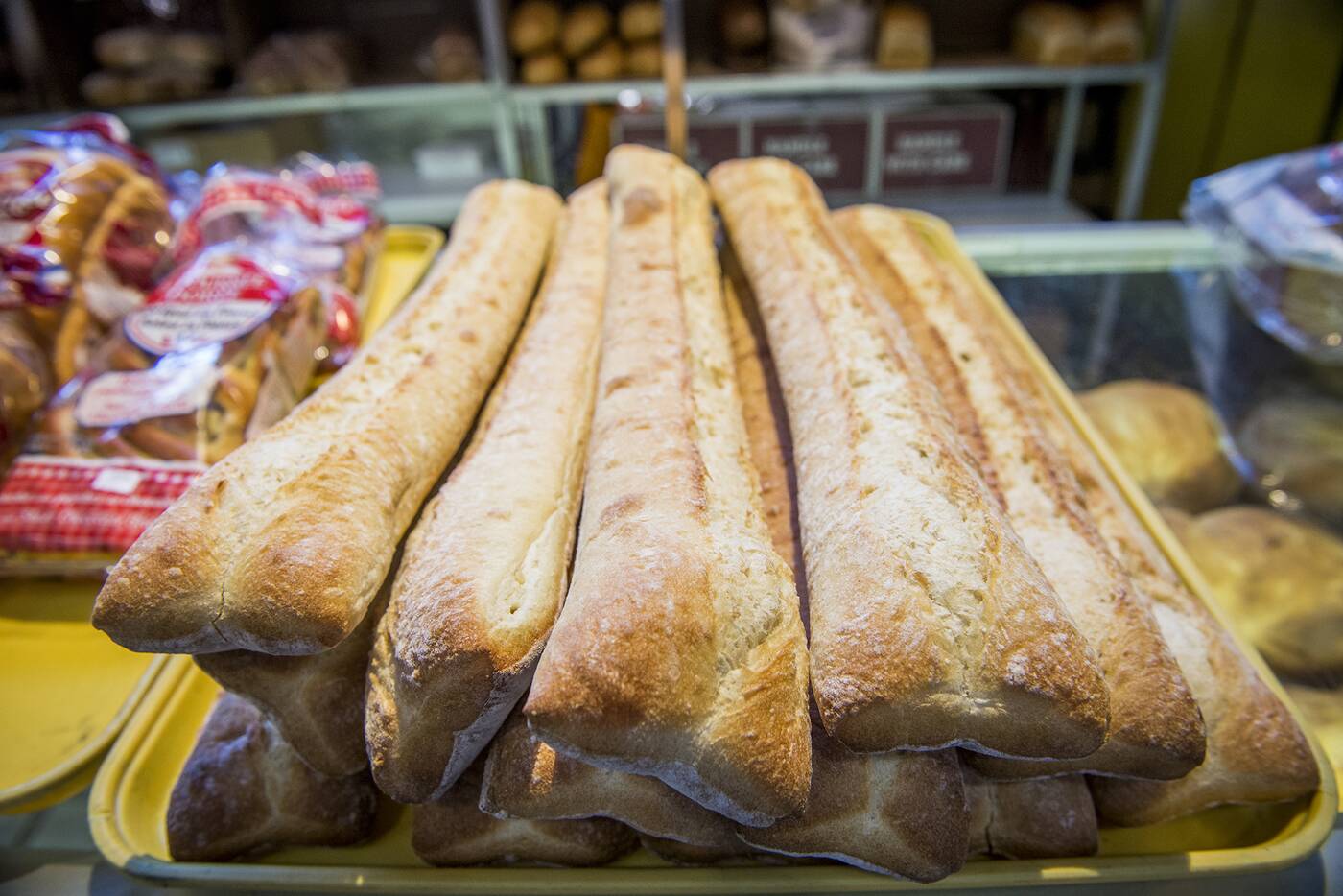 There's a variety of ciabatta loaves including multi-grain and olive on offer, which go for about two to three bucks. 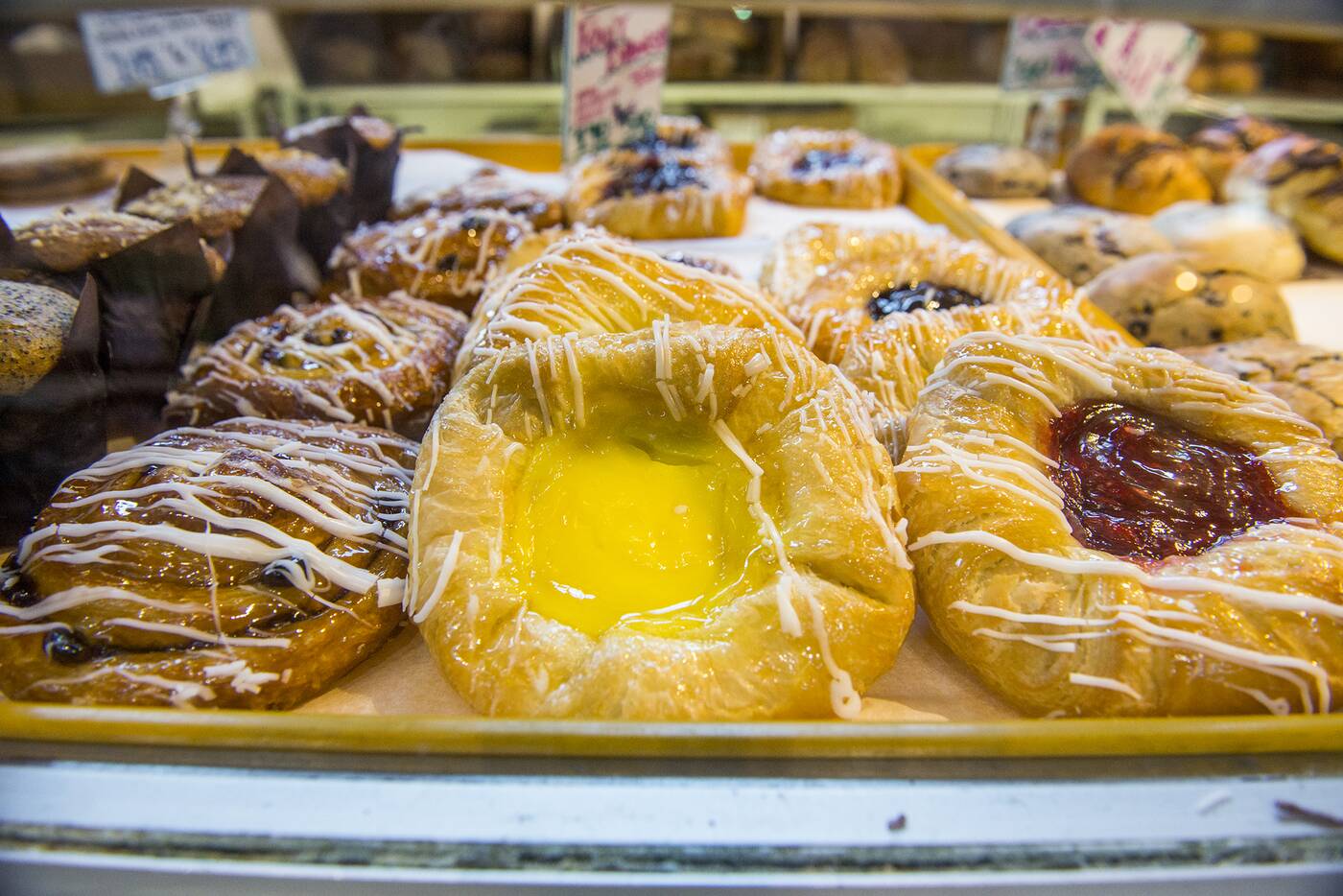 Then there are their sweet products like danishes and muffins, as well as custard tarts ($1.25) which are also made by someone else, but paired with a peameal bacon sandwich make pretty much the most Toronto meal ever. 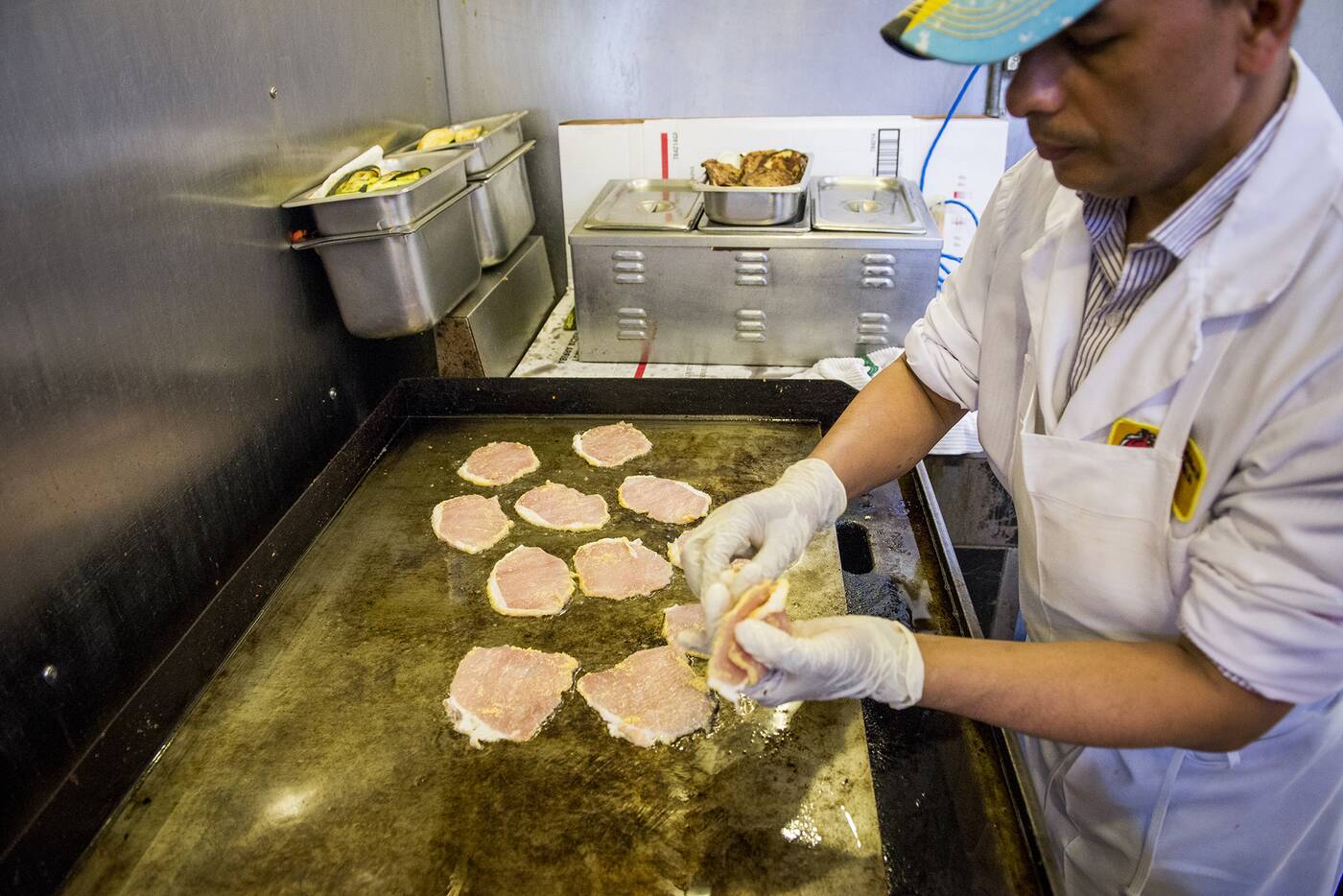 This tourist destination within a tourist destination is beloved by both visitors to Toronto and tourists alike. Though the best peameal bacon sandwich in Toronto is hotly contested, it’s safe to say you’ve never really lived in this city until you’ve had one from Carousel Bakery. 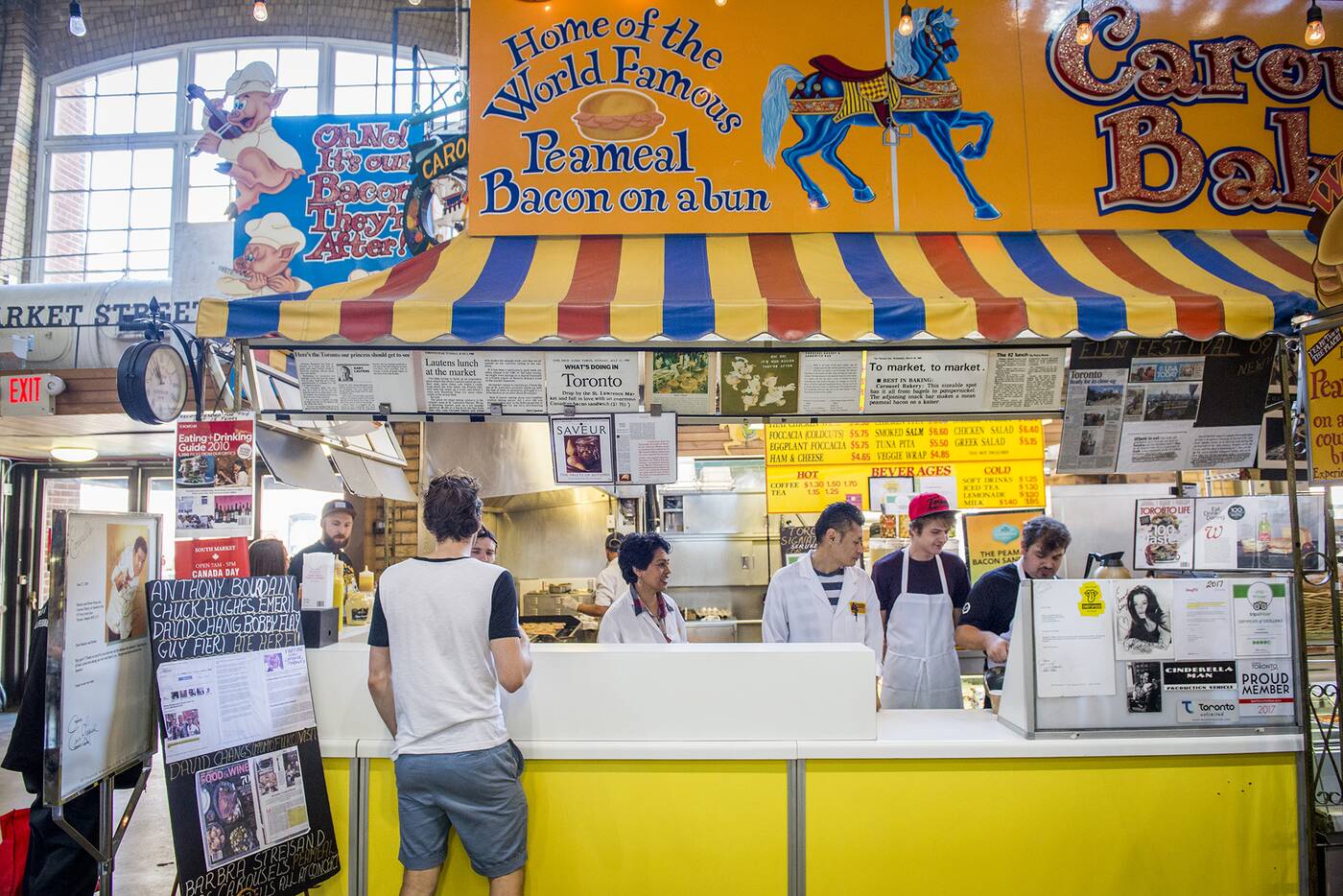