With the imminent threat of lockdowns no longer looming, Toronto's economy is slowly but surely beginning to recover.

Restaurants can welcome indoor diners again, capacity limits at gyms are gone, and masks are no longer required in clothing stores (where, to be honest, it's been kind of hard to try on sunglasses for the past two years).

The Bank of Canada reports that, despite ongoing supply chain issues and labour-related constraints, most local businesses expect to see significant sales increases throughout 2022. A casual glance at the bustling streets of Toronto on any warm day this spring would suggest the same.

Yet, while the economy does seem to be rebounding as we move through 2022, thousands of local businesses simply couldn't make it to this point.

A report set to go before the Planning and Housing Committee at City Hall next Tuesday reveals that Toronto saw a net decrease of 3,090 business establishments between 2020 and 2021. With 82o new establishments added the same year, this means that roughly 3,910 businesses closed in total. 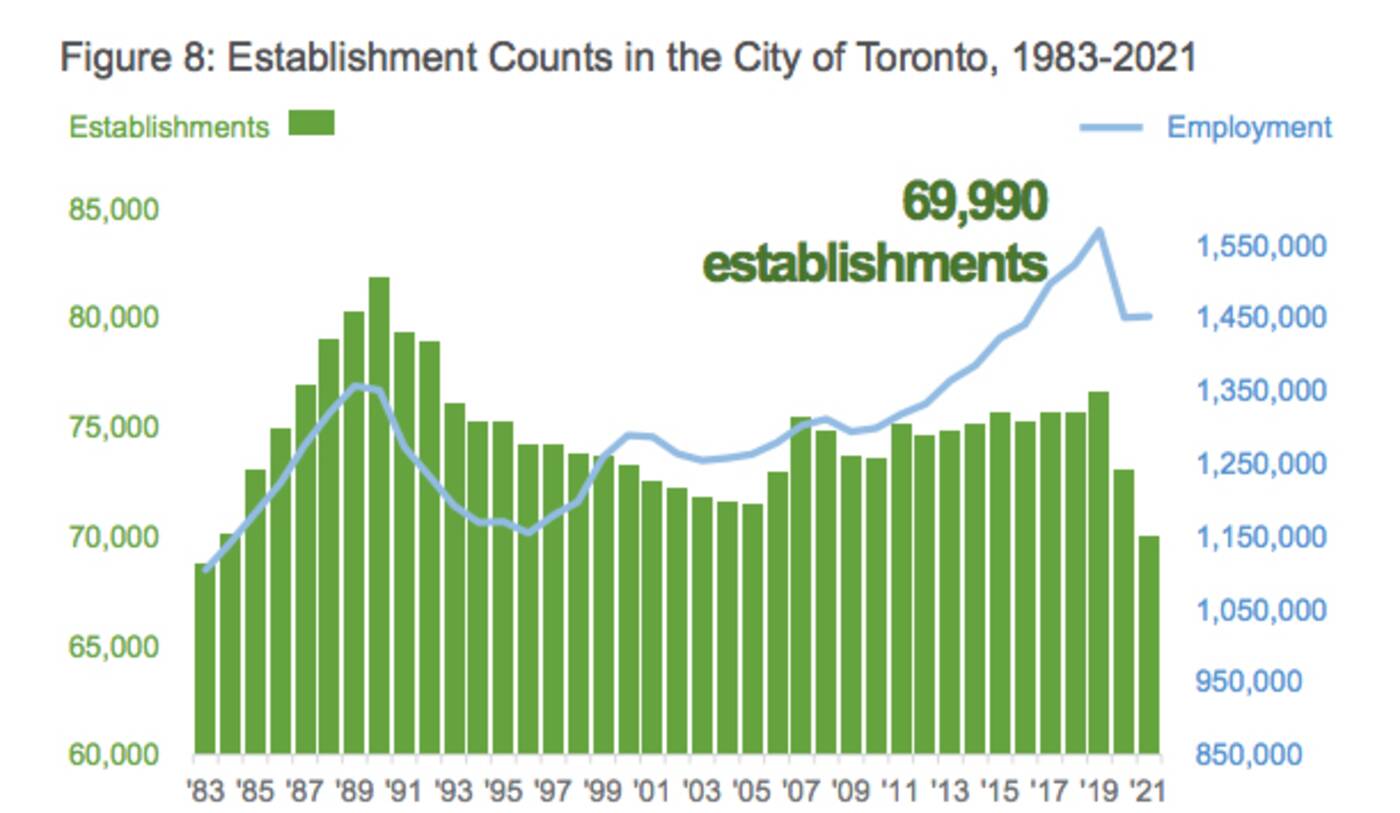 The number of new businesses in Toronto had been climbing steadily for years before the pandemic hit. Image via Toronto City Planning.

"Toronto's economy experienced limited recovery in 2021, following the record-breaking job losses of 2020 due to the onset of the COVID19 pandemic. In 2021, employment increases were observed in Institutional (0.9%) and Office (0.7%) categories, while Manufacturing as well as Service employment declined by the highest rates, both at 1.7%."

The survey counted 69,990 business establishments in total last year, representing a net decrease of about 4.2 per cent.

These figures don't sound great, especially when combined with data from the year previous. Contrasted against that same data, however, we do see some slight signs of improvement — which is notable, given how much of 2021 was spend with heavy restrictions in place across Ontario.

The 2020 version of Toronto's Employment Survey posted a 4.5 per cent net decrease in businesses over 2019 with 3,480 establishments closing and only 800 opening.

So, while the survey did count more overall businesses (73,080) in 2020 than it did in 2021 (69,990), the drop rate improved slightly between these years, both on account of less businesses closing and more businesses opening.

On on BlogTO, and at one point, everyday there was an article about another loved Toronto business shutting down. A quick search found this: (I’m especially sad about Stratengers, I just saw in the article it’s gone, in 90’s my band often played there).https://t.co/6Pu4no34oW

Previous to the pandemic, the survey hadn't posted any major net decreases since 1993 — only new establishments (of which there were 3,810 in 2019.)

"This year's decline is the most significant loss of establishments documented by the Survey since it was launched in 1983."

The newly-released report on 2021's survey is far from sunshine and rainbows, but it's nice to see that things didn't get exponentially worse during the second year of the COVID pandemic.

Toronto may have lost thousands of business establishments last year — new and old, large and small, local and global — but it's gaining them back at a clip. Here's to hoping that we net out positively in 2022.