An unprecedented number of protests took place across Toronto in 2020 amidst a citywide lockdown unlike any we've seen in a lifetime.

Anti-Black racism, income inequality, our lack of affordable housing, the fight for Indigenous sovereignty, human rights — if there's one thing the global pandemic achieved, it's the baring of pervasive social crises in Toronto that can't be glossed over any longer. 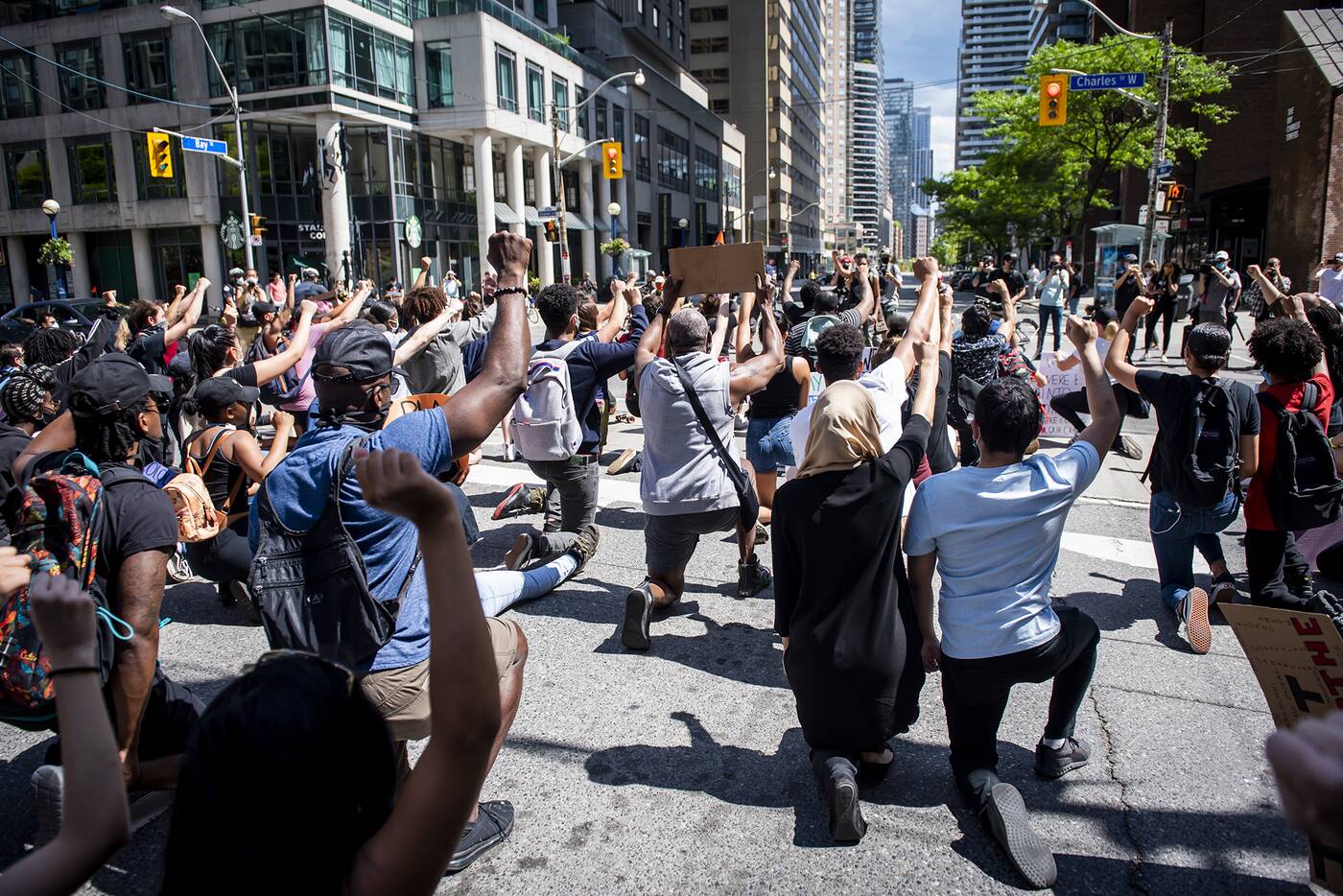 Coupled with the mass movements fuelled by the murders of George Floyd and Breonna Taylor, among other Black civilians in the States, plus political unrest overseas, Toronto cititizens spent a large part of the summer exercising their Charter right to peacefully protest. There were many, often with overlapping demands.

Some are still ongoing, virtually and in person.

Here's are some of the notable protests that happened in 2020.

Following the death of Toronto resident Regis Korchinski-Paquet, thousands of masked rallyers took to the streets in June to demand answers to the 29-year-old woman's death, and a call to end anti-Black and anti-Indigenous racism worldwide.

The rally took place shortly after the death of George Floyd and got the ball rolling on a number more Black Lives Matter demonstrations in Toronto and across the GTA, including one held by Markham teens, for the next several months.

The event was organized by Not Another Black Life, who formed shortly after Korchinski-Paquet's death. It started at Christie Pits before making its way to Toronto Police Headquarters. 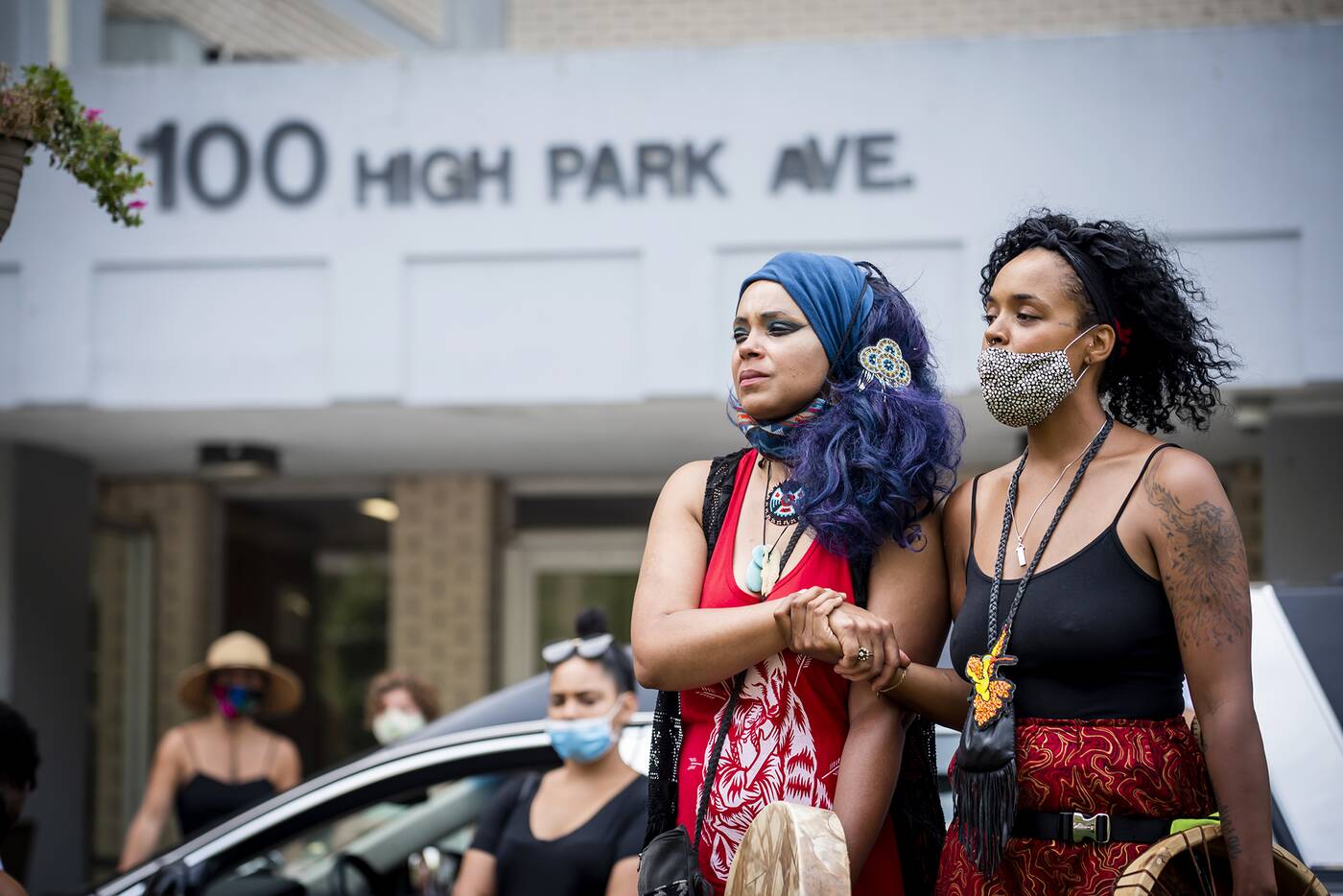 At the time, the SIU was still investigating why and how Korchinski-Paquet fell from the a 24th floor balcony during an interaction with Toronto Police at her High Park apartment. Family members had called police to assist during a mental health crisis.

In August, the SIU ruled against criminally charging any TPS officers in connection with Korchinski-Paquet's death.

February saw one of Toronto's largest rallies in solidarity of Wet'suwet'en First Nation, who are still fighting against the $6.6 billion Coastal GasLink pipeline that will cut through unceded territory in northern B.C.

It started with a rally led by members of groups like Climate Justice Toronto, Idle No More Toronto, Rising Tide, and Porcupine Warriors in January, with hundreds gathering in front of banks RBC and TD.

By February it had built up to a thousands-strong march on Family Day, that went from Christie Pits to Queen's Park. That month saw numerous arrests of protesters on Wet'suwet'en land and community-led rail blockades at the height of winter, sparking similar rallies in downtown Vancouver, Calgary, and Halifax.

Lockdown in March led to staggeringly high unemployment rates in Toronto. Residents reported struggling to make ends meet and called for a ban on evictions and rent relief.

Despite this, some landlords threatened to kick people out of their homes (even during the province's brief moratorium on residential evictions), leading tenants group Parkdale Organize to lead its first Keep Your Rent charge during the pandemic on April 1. 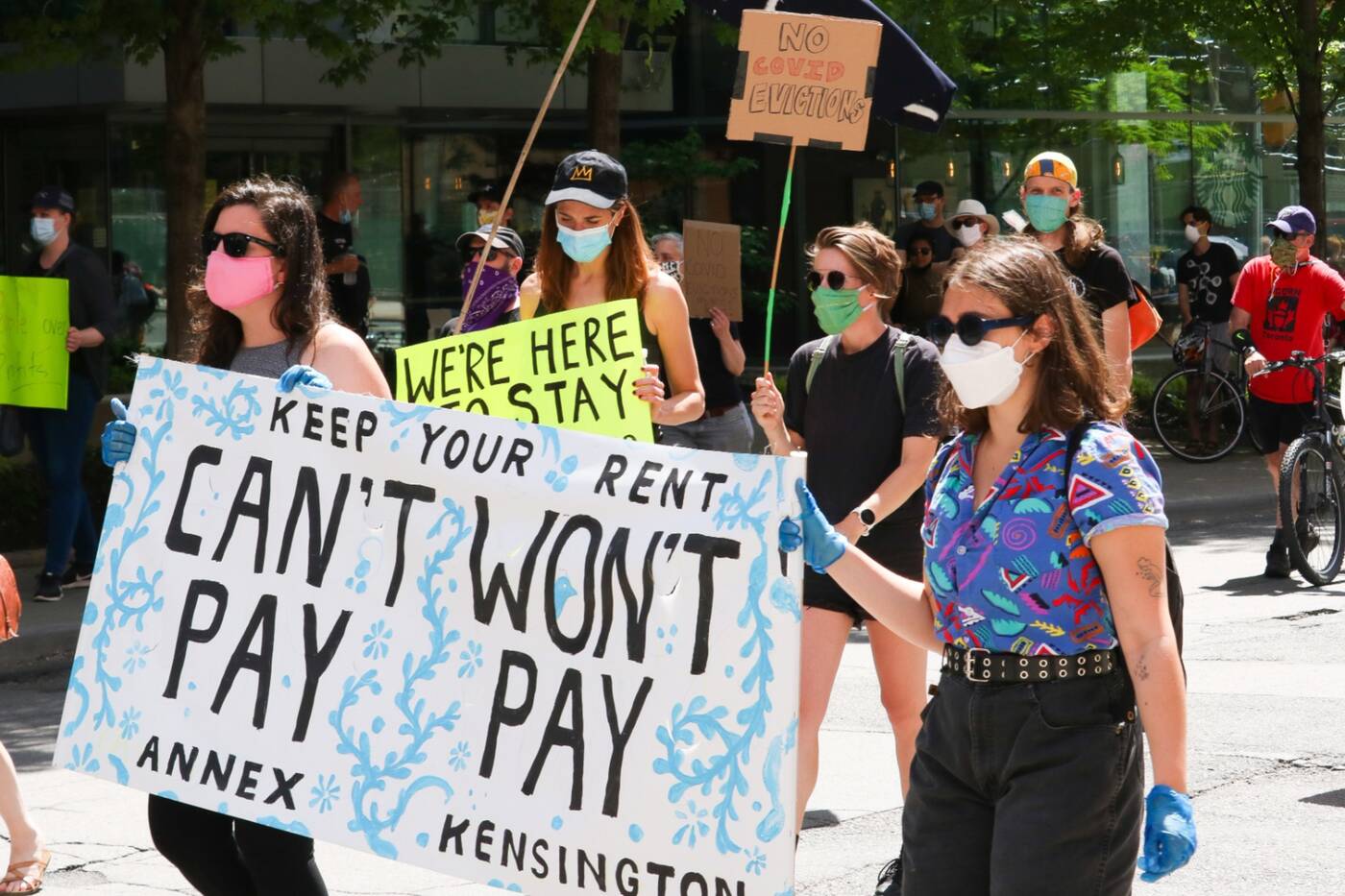 Residents in Toronto fought for a ban on evictions and for rent relief during the lockdown. Photo by Audrey Crunkleton.

The participation citywide was notable and unprecedented, with residents across Toronto withholding their rents that month, and in some cases, the month after.

It was an at-home protest, but a number of in-person actions followed suit, including one outside Mayor John Tory's Yorkville condo and outside landlords' mansions.

The conversation around abolitionist movements in Toronto went from a whisper to a shout in 2020.

Joining similar protests across North America, Juneteenth in Toronto saw thousands of protestors and a massive Defund The Police sign painted on the street take over the space outside TPS headquarters. 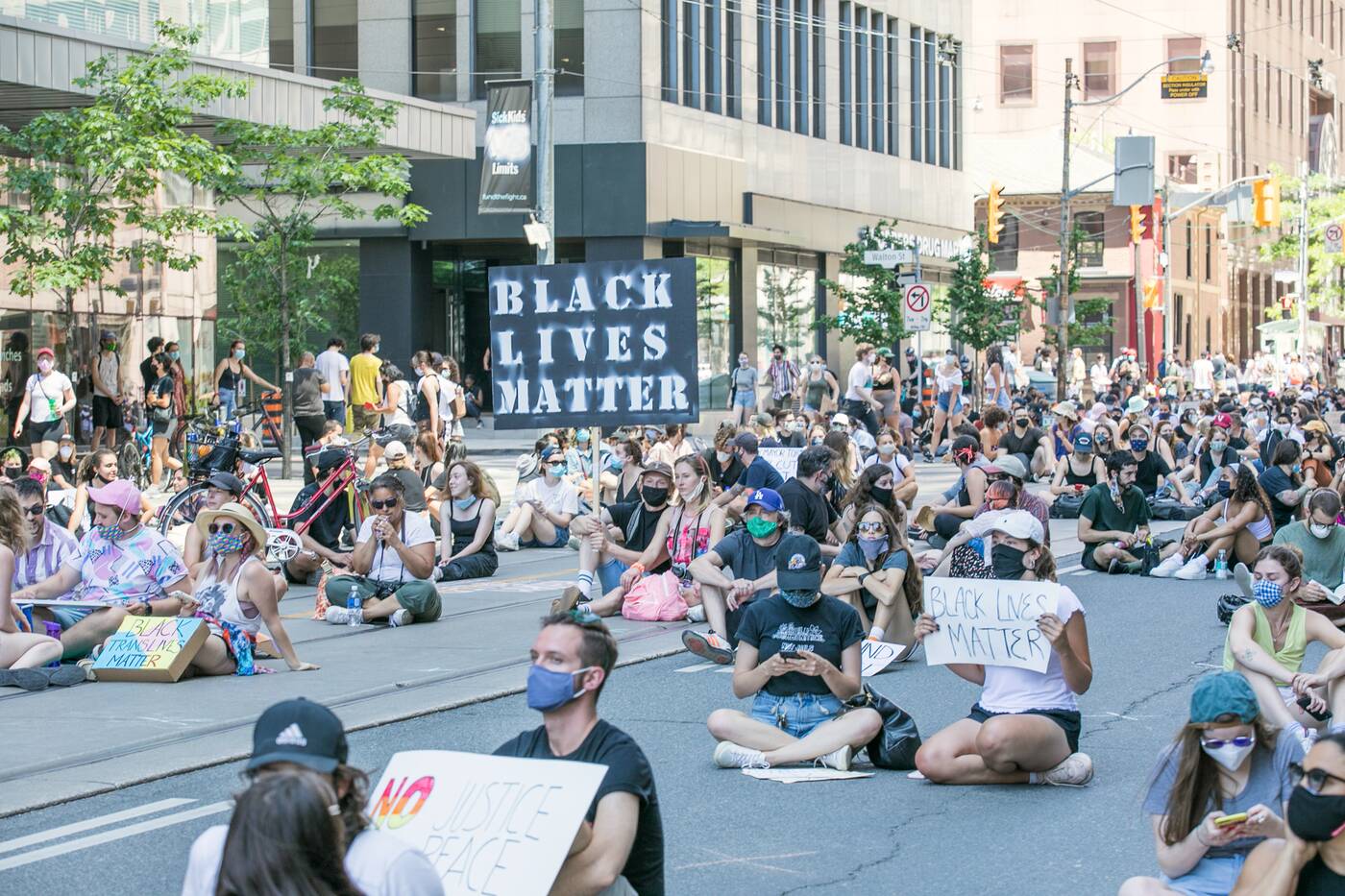 The Toronto Police Board meeting on anti-Black racism that was initially scheduled to happen that day was pushed to August instead.

Three hundred people gathered at Yonge-Dundas Square last month in support of the Mi'kmaq fishers of Nova Scotia, who had been facing increasingly violent assaults led by non-Indigenous commercial lobster fishers since September. 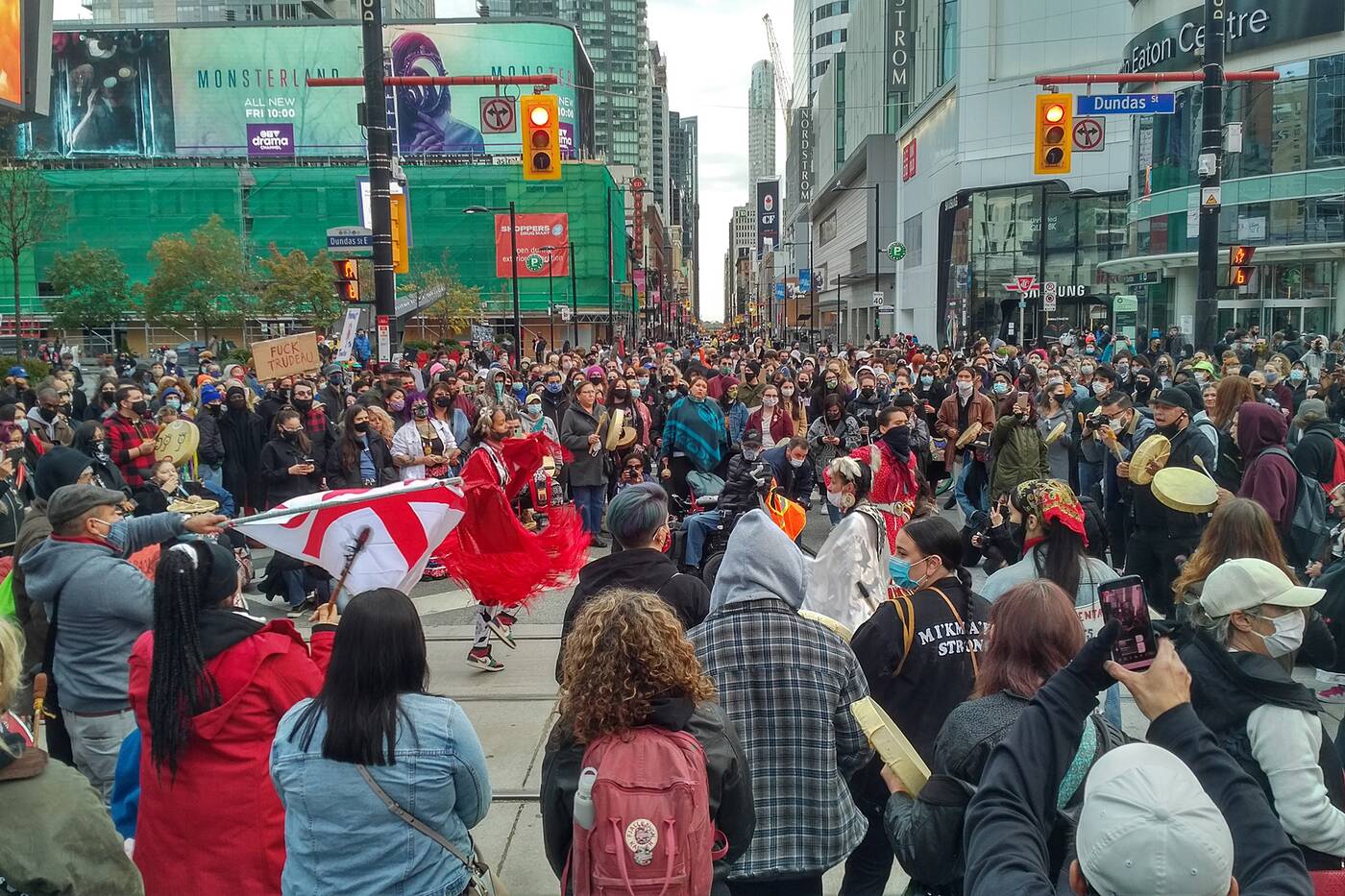 Around 300 people gathered at YDS last month in solidarity with Mi'kmaq fishers in Nova Scotia. Photo by Martin Reis.

Other forms of non-violent protest included boycotting all lobster sales and sorucing directly from First Nations fisheries, as in the case of Toronto restaurant Oyster Boy.

ESN led a march through downtown in September to demand affordable housing and a commitment from the city to help support houseless folks as winter approaches.

Approximately 300 people congregated to with music, art, and free meals for the residents of the encampment at Moss Park, with speakers like journalist and activist Desmond Cole taking the mic.

expropriate these buildings (WE real estate!) and use it as housing! pic.twitter.com/SsY9Vhtr1E

Performance art included projections that said "This should be housing" on the side of empty buildings.

Demands from the group, which has been active for over three momnths, include turning vacant buildings into housing to create 10,000 units in the next two years, a moratorium on eviction, the end of criminalization of encampents, and adequate emergency shelter spaces.

Late October saw nearly 500 people take to Yonge-Dundas Square, and then Nathan Phillips Square, to demand an end to police brutality in Nigeria.

SARS, the Special Anti-Robbery Squad, which is a branch of the Nigeria Police Force, has been accused of murdering and extorting Nigerian youth. In Toronto, young Nigerians congregated in a candlight vigil to read out the names of people who had been killed by SARS

From April until now, people have been congregating under the umbrella of opposing the lockdown, while also taking the opportunity to lump in a hodgepodge of social issues, moving from public health to firearms restrictions to anti-abortion to human micro-chipping. 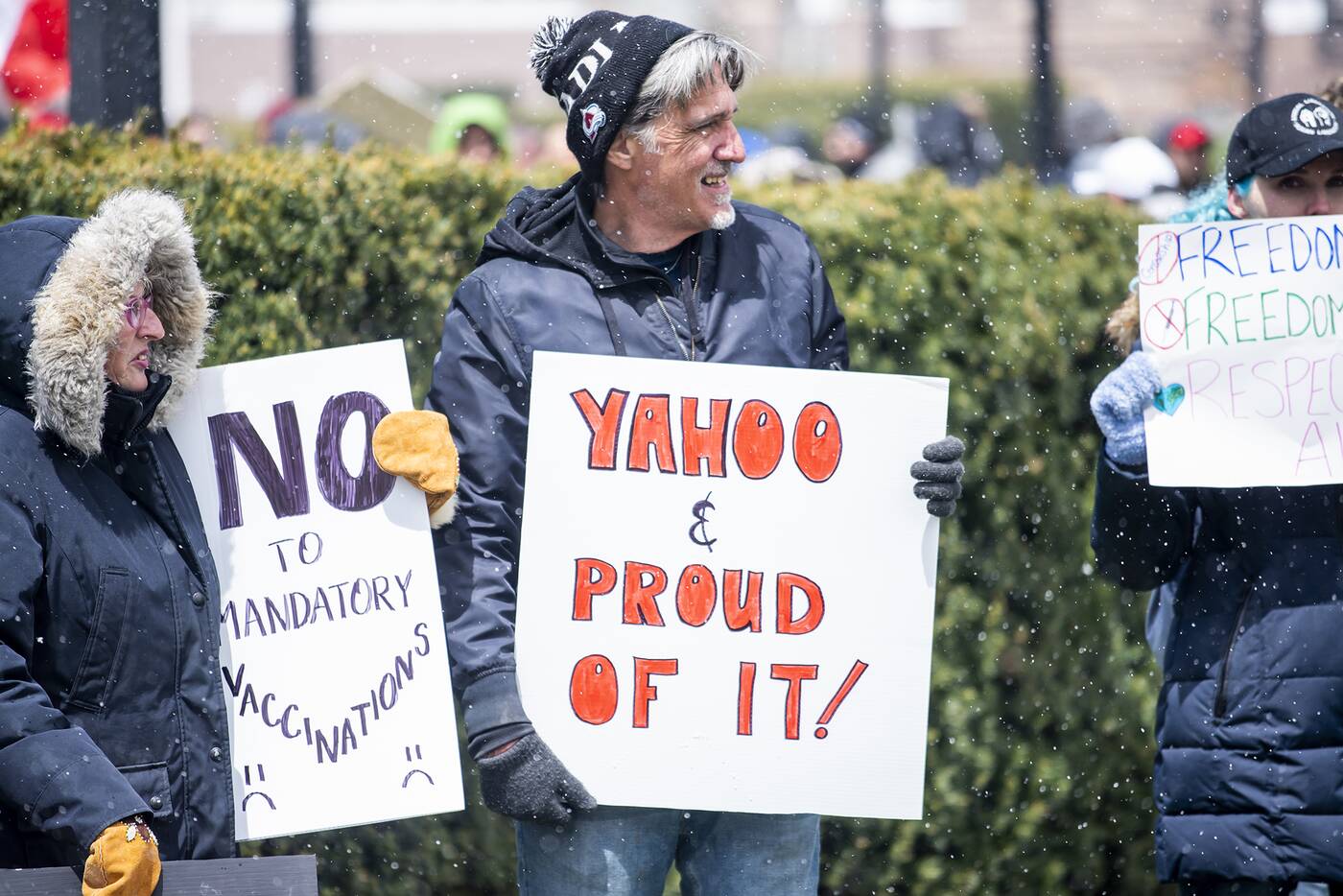 Doug Ford called them "yahoos" when they first started hanging outside Queen's Park. However you want to refer to them, their congregations have shone a light on a divisive perspective that raise questions around racial and socioeconomic equity, with serious public health implications. 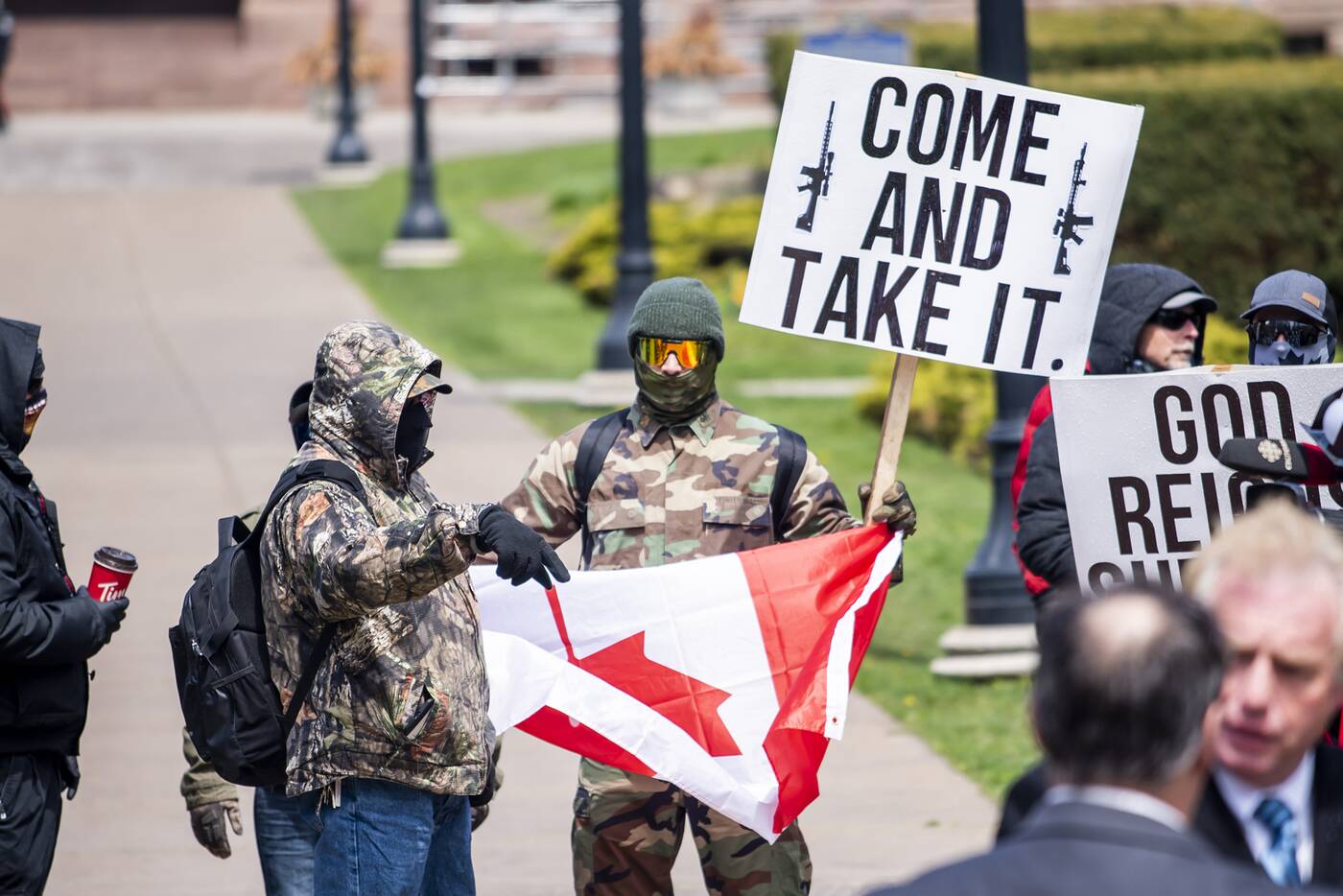 It's not a small group either, and their claims are even more extraordinary, from accusing hospitals of being empty to COVID-19 being a lie. Meanwhile, figureheads born from the anti-lockdown movement actively flout the requests of Canadian public health officials.

They've gone from gathering outside the Ontario Legislative Building on weekends to regularly marching downtown.