At this point everyone knows how much the King Street Pilot has changed up the Entertainment District.

The City's plan to beautify the now essentially car-free stretch of King between Jarvis and Bathurst has marked the arrival of parklets – fun public areas taking over curbside spaces – and it seems like most neighbouring businesses aren't mad at it.

From the fun new furniture taking over the street, to arcades and human-sized impression boards, the area has transformed over the past few months from a congested city street into an interactive play space.

Now it looks like the Entertainment District is about to get even jazzier with the advent of more liquor-licensed curbside patios and cafés.

This year, the City encouraged restaurants within the King Street Pilot area to drum up business by waiving their application fees for curbside patios - something that restaurants like Cibo have already taken advantage of with their European-style patio.

Just outside of the Entertainment District, the northern part of Temperance Street between Sheppard and Bay will also be getting two new curbside cafes by way of Boxcar Social and Johns & Sons Oyster House, which are slated to be built sometime in August.

And at The Fifth, a new 47-seater patio opened just two weeks ago marks the first signs of beautification to hit Duncan Street, complete with planters and a view of the CN Tower.

"The visibility on the street definitely helps a lot," says Ivy Ho, an associate at the Fifth. "It draws in a lot more people." Though the Fifth's patio took only two weeks to construct, all restaurants looking to expand their business to the street have to ensure they're meeting all safety requirements for building their curbside space.

"Visual barriers are a huge issue," says Ho. "Cars have to have a proper sight line across our patio." 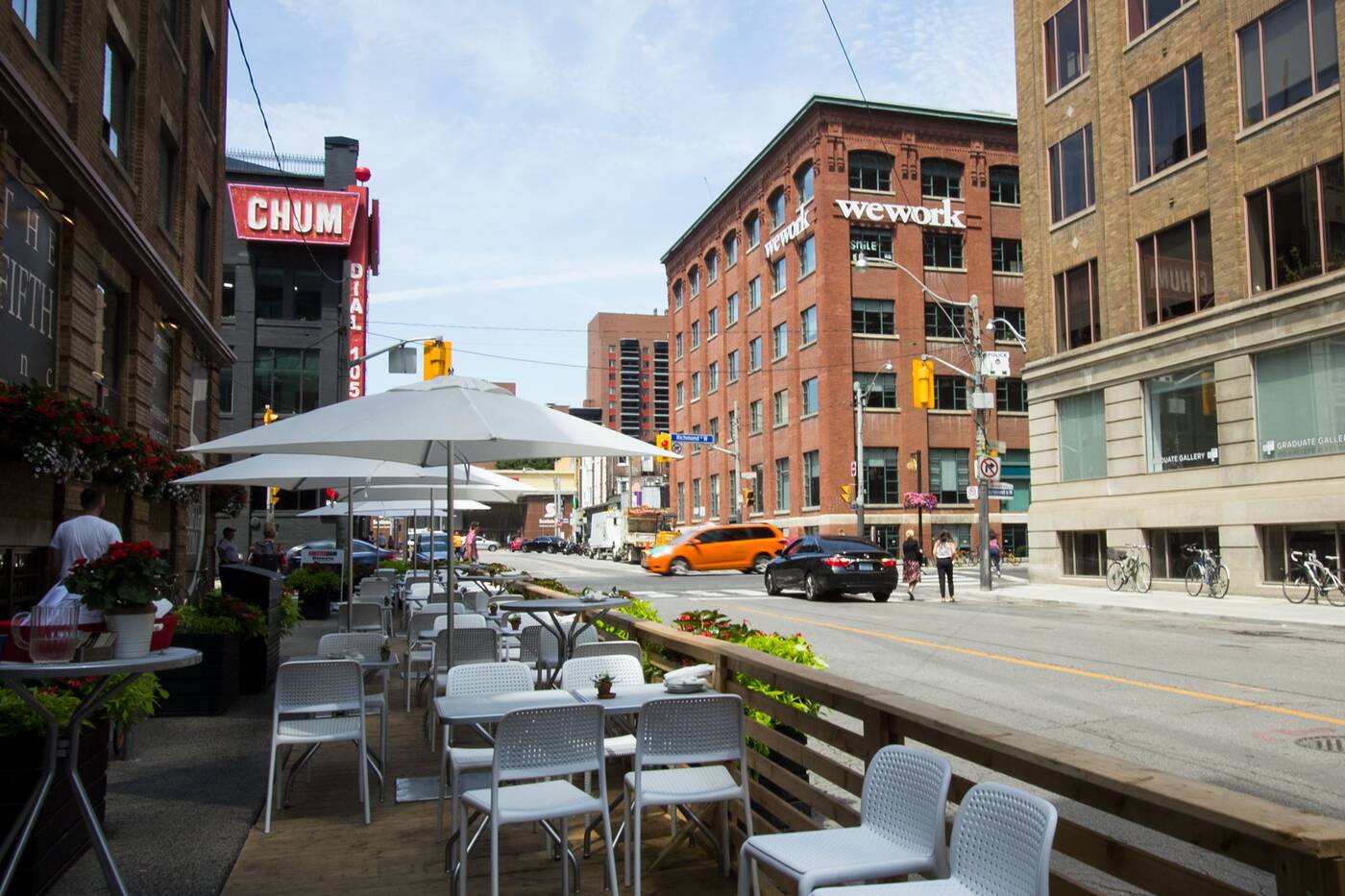 The Fifth's new curbside patio runs along Duncan Street. From mandatory reflective tape to making sure that patio barriers are low enough for drivers to see past, the application process consists of three permits via the City, the Liquor Board and a full inspection of the decking. Photo by Tanya Mok.

Not permitted are things like outdoor music or BBQ areas, and curbside patios are required to close by midnight on Fridays, Saturdays, and by 11 p.m. every other night. You'll also only be able to enjoy them until November 14, after which they'll be packed away for winter.

Once all conditions are met, though, we can all take advantage of downtown's newly-freed-up streets with some alcoholic beverages in celebration of summer.