King Street is officially one of Toronto's most colourful streets. Thanks to the King Street Pilot, there's been an explosion of fun new furniture brightening up the area between Jarvis and Bathurst, and it looks like we just got four more cool designs to play with.

Today ShapeLab unveiled four new pieces of art – two in David Pecaut and two in St. James Park – designed by Ryerson students as part of its #ShapeTO competition – the university-level version of the pilot's original "Everyone Is King" initiative.

Winning teams of four to five students were given a $4000 budget to complete their installations and $1000-worth of prize money. There weren't really any guidelines, but they were encouraged to be accessible and "whimsical" with their designs as possible.

Here's what the four new installations of the King Street Pilot look like. 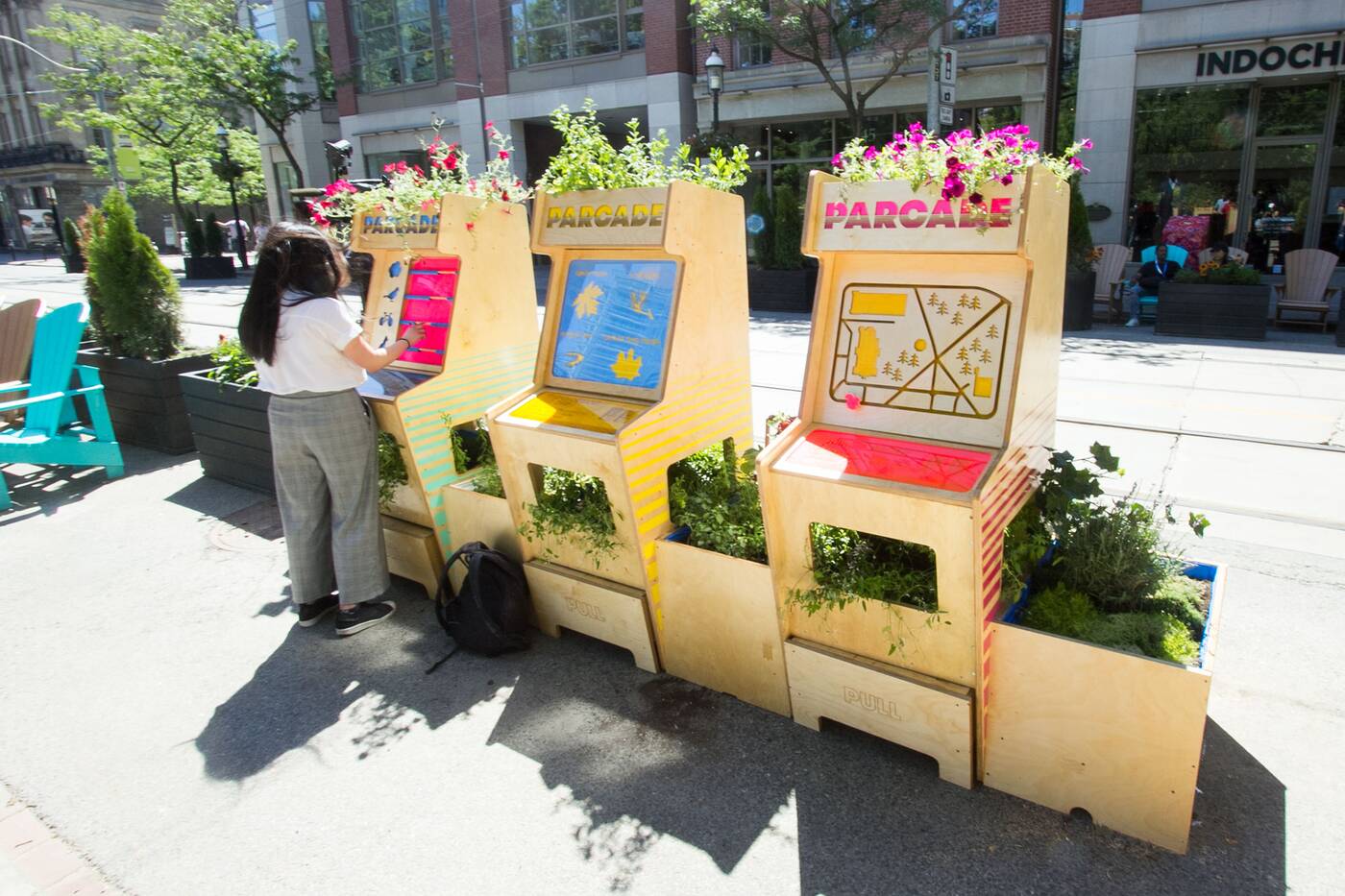 An outdoorsy take on 70s arcade games, this interactive set made of plywood and acrylic is geared mostly toward children exploring St. James Park.

The 'Countman' game (a take on Pac-Man) uses little beads to tally your count of things like birds, clouds, bikes or dogs in the park.

'Tree-Thousand and One' helps you identify the different types of leaves you can find in St. James Park, while Squirrel Racer provides a fun way to map out the park.

It also features little planters of flowers, which will be maintained by the St. James Park BIA. 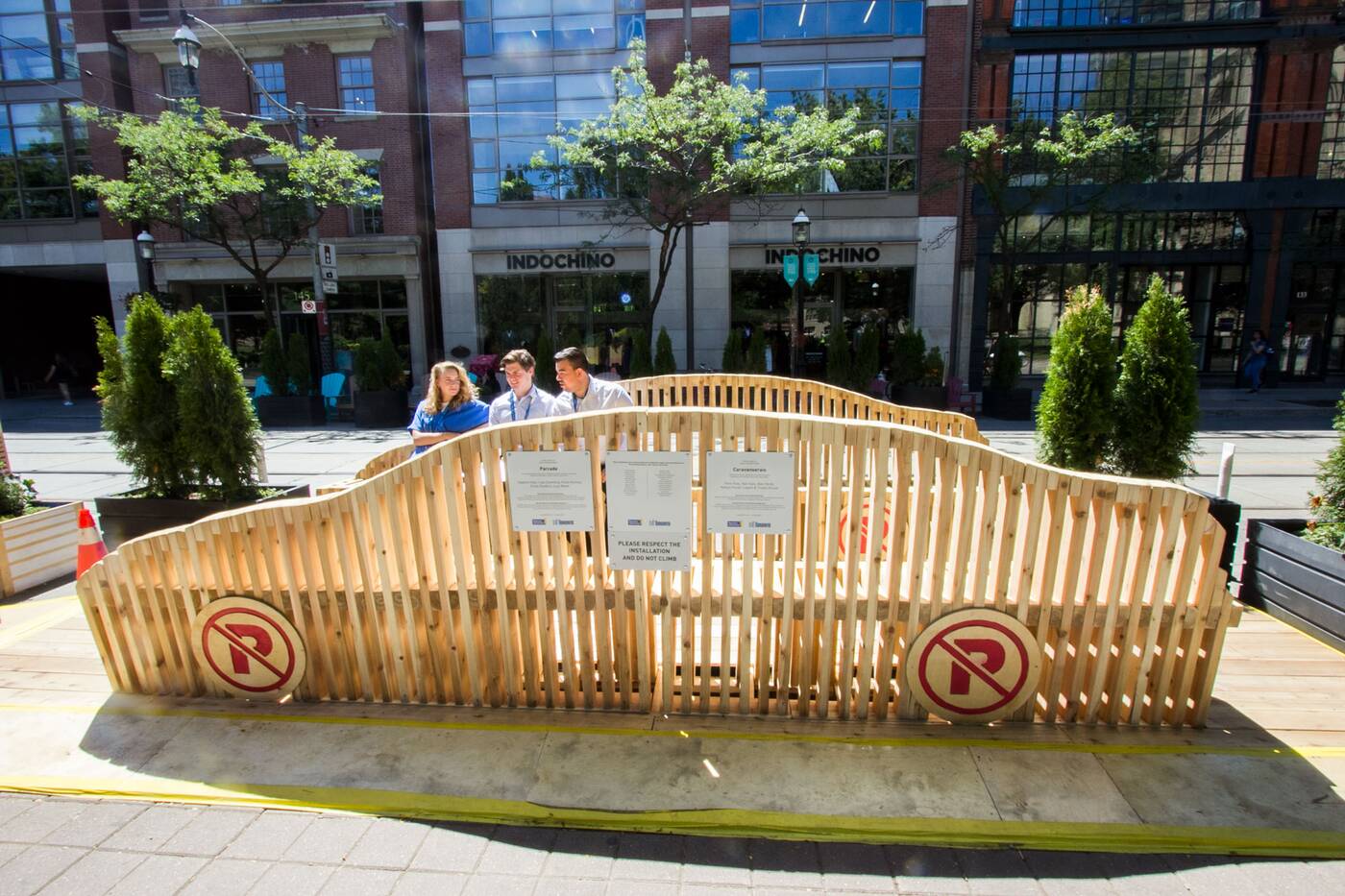 A throwback to the days of the ol' horse and carriage, a caravanserai is the term for an inn where weary travellers could park their caravans and steeds after a long journey.

Built in the shape of a car, this cedar wood seating area street-side by St. James Park presents a new-age caravanseria, where tired urbanites can take a rest in an area dominated by the modern carriage.

According to the installation, almost half of the city' parkland is used for parking – making this bench a direct salute to the King Street Pilot's no-car policy. 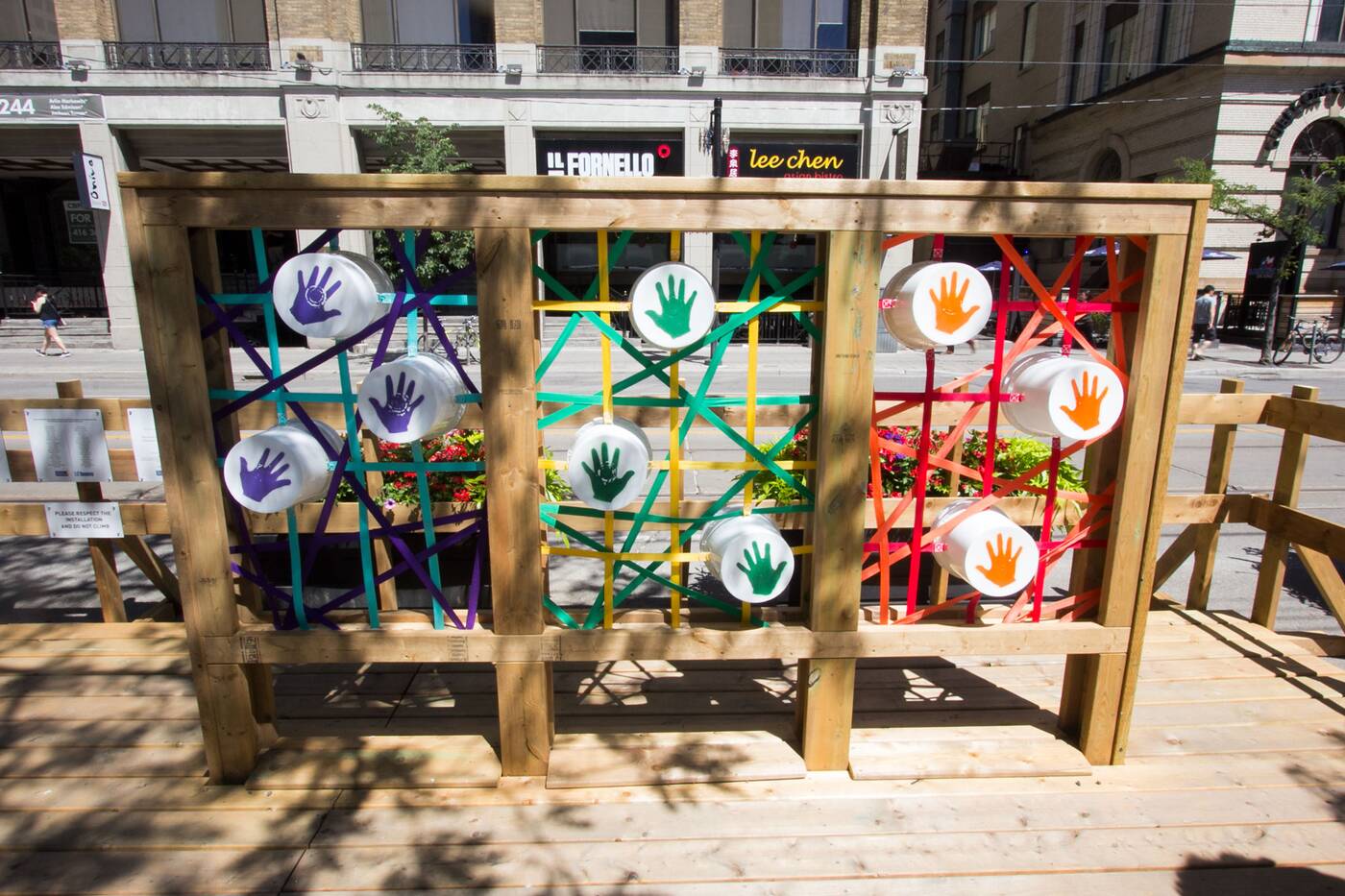 Made from straps and buckets from local stores like Canadian Tire and the textile stores of Queen Street, this installation certainly adds some fun to the Entertainment District.

The best part about Resonance is the amusement it's bound to provide to late-night revelers wandering around King Street: head here after it gets dark and you'll find the drums light up with green and blue lights when you smack them. 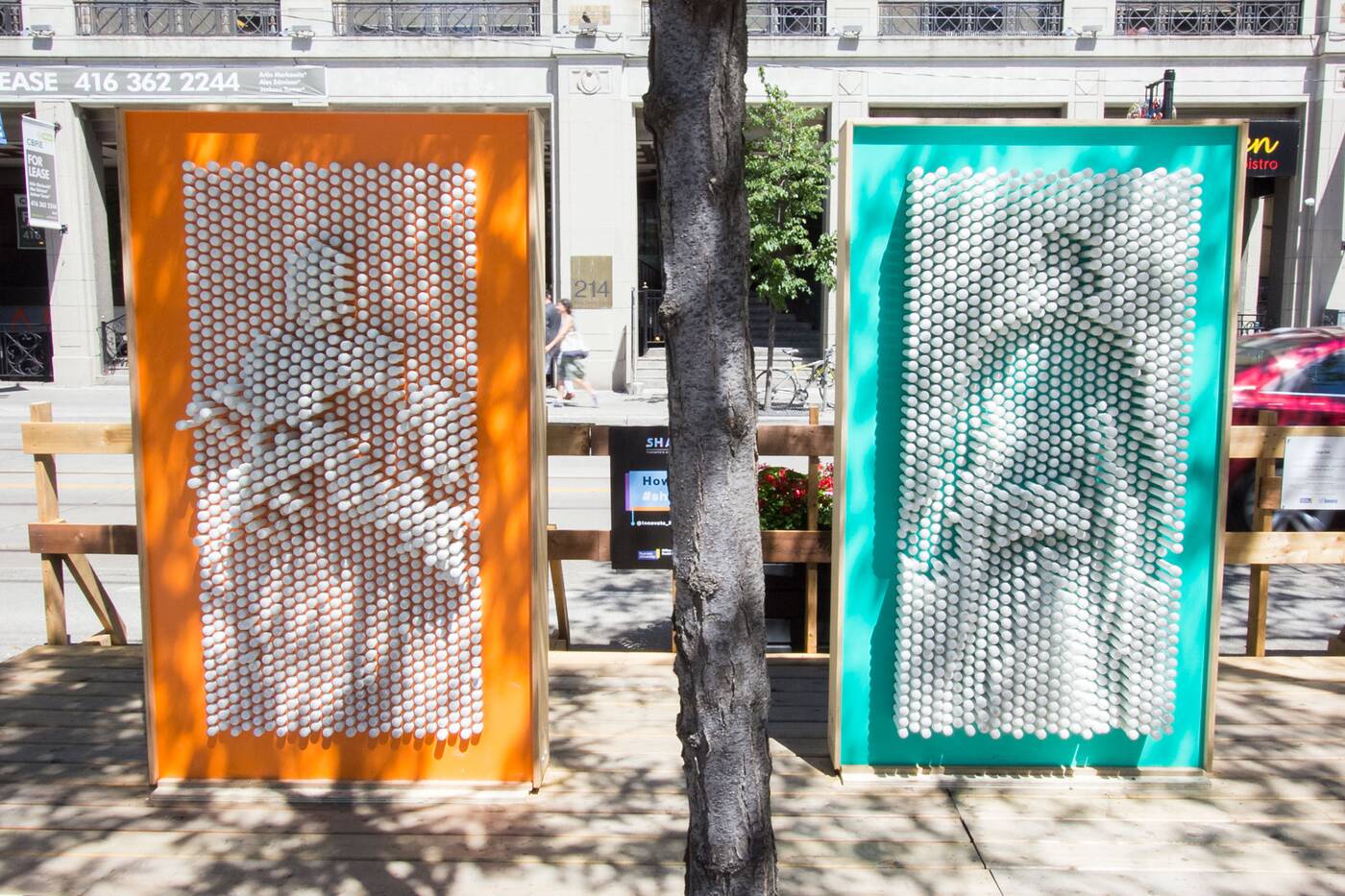 We all know those pin impression toys: the ones that were viscerally satisfying and equally disturbing to play with as children. Now there's two life-sized version of these things outside of David Pecaut Square, and rest assured – it's still as fun now as it was then.

Constructed from pine wood and PVC pipes, you can press your entire body into these things and leave your fleshy human mark in this very transient world.

People of all ages will be pressing their bodies into this thing – kind of a cool reminder that we're pretty much all the same when it comes to PVC pipes. 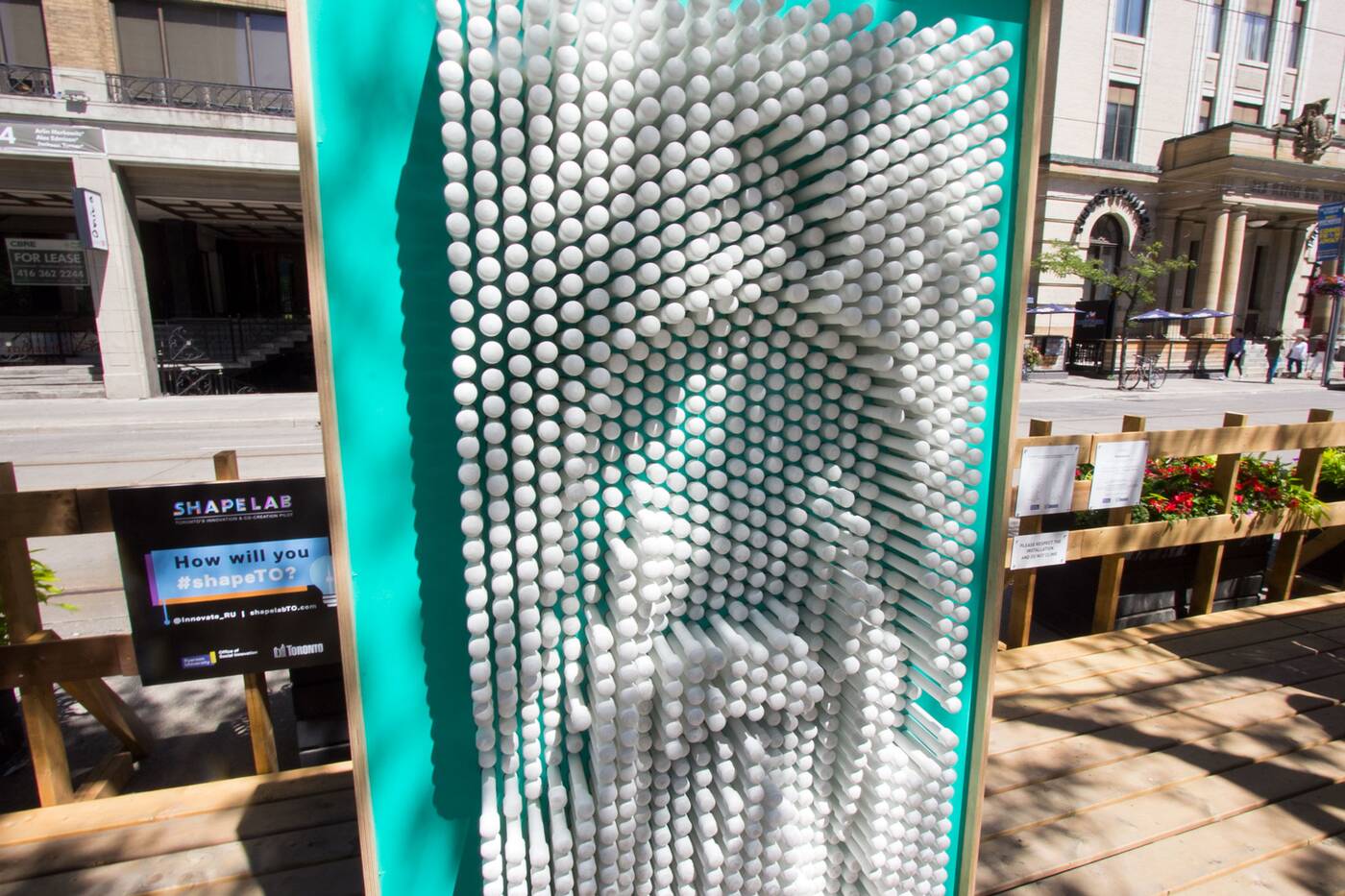