How to spend a day in Leslieville and Riverside

Leslieville - and its western cousin, Riverside - span Queen East from the Don to Coxwell. The "Leslie" of the name is George Leslie, who owned the Toronto Nurseries; in the 1850s, most of the neighbourhood's population either worked there or in local factories. Over the past 15 years, it's experienced a major renaissance, with an influx of restaurants, cafes, bars and shops catering to the local population.

Queen St. is the neighbourhood's most established drag, while Leslieville's eastern reaches, north of Queen, are in the process of transforming from industrial grounds to condos and shops. That's giving way to newly-minted destinations like Dundas and Carlaw - visitors might find there's plenty of action down on Queen to keep you busy, but don't be afraid to explore.

Here's how I'd spend a day in Leslieville, from morning until late night.

Brunch is practically a competitive, full-contact sport in Leslieville. I find myself craving Lady Marmalade's to-die-for cheddar and spinach waffles, topped with bacon or avocado and served with chipotle sauce, on the regular, but there's also the gloriously enormous pancakes at Okay Okay Diner, and the menu of French faves at Bonjour Brioche. 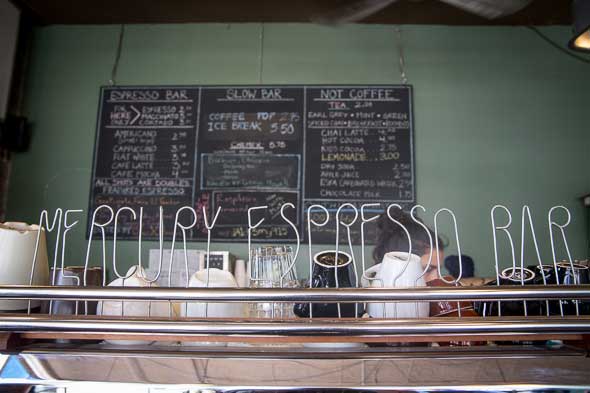 Step two, of course, is an extra dose of caffeine to ward off the brunch coma. Dark Horse and Merchants of Green Coffee dole out the brew in Riverside; further east, there's Te Aro and Mercury Espresso. If it's a weekday and and I'm up for a bit of a treat I head slightly north of the 'hood to Pilot Roasters' hidden away tasting bar for a bit of education.

If I'm not super-full from breakfast (or brunch), one of the city's best-loved spin gyms - Quad East is just down the street (if I'm lucky, they'll be holding one of their live DJ spin classes). I might put my hilarious lack of upper-body strength to the test at Rock Oasis rock climbing studio. More likely, though, my nerdy couch-potato side will win out, and I'll poke my head into 3D Phacktory 3D-printing studio or the Atomic Toybot shop and gallery. 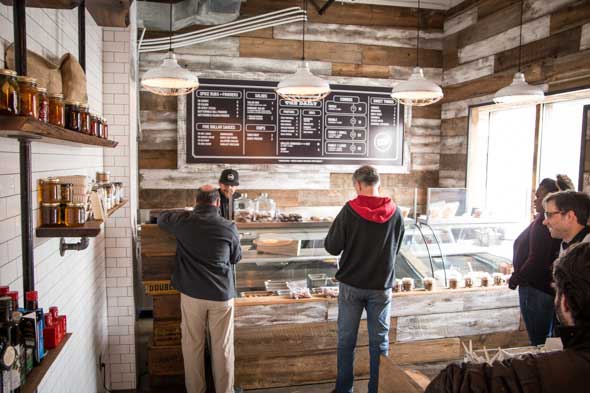 Leslieville has tons of grab-and-go options (perhaps for a leisurely mini-picnic in Jimmie Simpson Park)? For a cheap, healthy bite, there's Pulp Kitchen, where $10 gets you two of a smoothie, a salad, or a sandwich (weekdays only during the lunch hour). For something with a bit of meat on it, there's Completo's melt-in-your-mouth sandwiches and fries, fish and chips at Reliable or the hot table at Tommaso's Trattoria - a favourite among those who work in the local film industry. A newer option is Food Dudes Pantry, where the local caterer and food truck outfit cooks up takeaway dishes like grilled salmon, beef brisket and salads.

Between Common Sort and Value Village, Leslieville is a bargain-hunter's paradise. If I get sick of staring at thread-pulled polyester at le VV Boutique, I might head east on Queen to Gadabout and ogle their cocktail dresses instead - or swing by Good Neighbour for a taste of the Drake General Store east of the Don. This hood is also great for record shopping: I found a yellow Elvis Costello 7" once at Discovery Records, and I'm stoked about the new Tiny Record Shop inside Token. 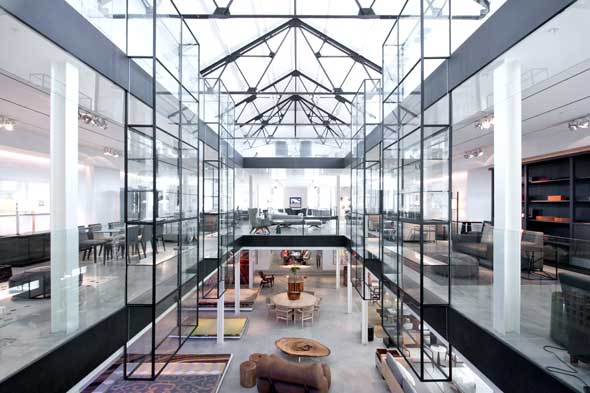 The neighbourhood's also long been a destination for design, particularly vintage furniture - though the tide might be rolling the other way, as shown by Phil'z recent move out of the neighbourhood. I'd pop by GUFF to check out some more affordable vintage pieces (hello, vintage credenzas), Machine Age Modern for some more aspirational items, or go super high-end (and not vintage) at Avenue Road on Eastern Avenue.

In my mind, Ed's Real Scoop holds the crown for Leslieville sweet treats; when the weather's nice, there's a line out the door. (My top picks: chocolate-chili gelato and toasted-marshmallow ice cream.) But if I'm hankering for something to chew on, I'll roll over to Bobbette and Belle for a slice of cake or one of their perfect macarons. 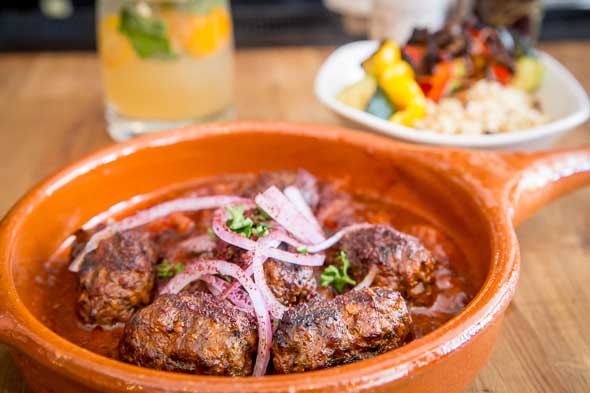 You can't go wrong in this neighbourhood at dinnertime - the best options tend toward slightly classier-than-average destination dining accentuated by inventive cocktail menus. The Riverside location of Tabule has a loyal following for its Middle Eastern dishes and attentive service, while Chef Lynn Crawford does locavore cuisine over at Ruby Watchco and Goods and Provisions offer game dishes and oysters in a cozy setting.

For this northern-Italian kid (we practically have mushrooms in our blood), the pasta menu at Enoteca Ascari, which alternatively features truffles, hen of the woods, and porcini, is a must. And even though it's not a Leslieville-specific dish, I'm thrilled I don't have to cross town to get the fried chicken sandwich at the County General anymore.

The Opera House dominates the music scene in this neighbourhood, offering a solid roster of mid-size touring acts in a beautiful, if faded, old concert hall (though, for me, the $8 beers and thorough security pat-downs tend to take the shine off the experience a bit). I might see if there's something on at the Jam Factory, an events and art space tucked into a quiet Riverside side-street. 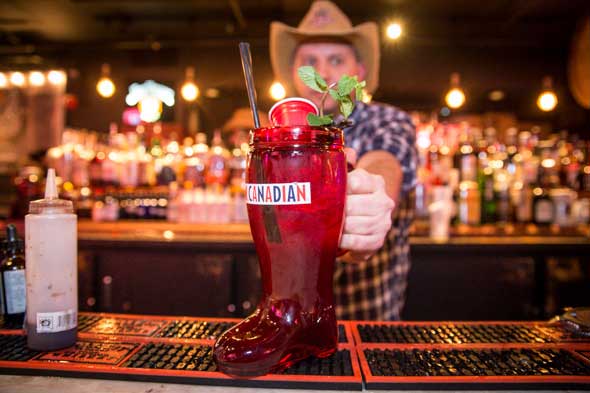 Boots 'N' Bourbon's line-dancing parties and bingo/chicken wing nights are a draw for local country fans; I, meanwhile, am game to endure the nu-country soundtrack if it means getting to munch on an order of their tacos. Generally, though, you'll find me at Hi-Lo Bar killing some craft brews with friends under the watchful eye of a giant Bruce Springsteen.

During the day, Tango Palace is a favourite spot for caffeine-powered students and freelancers, but they also keep the coffee and cake going until 11pm or so. (Thank goodness - seriously, am I the only one who likes to drink lattes at 8pm?) Aft Kitchen and Bar slings indulgent BBQ treats (the prices are high-ish, but the portions are huge) until 1am; if it's that kind of night, I'll probably grab a smoked-peach vodka lemonade to wash it all down with.

Finally, Leslieville Pumps is a shining light all others have gone out; though their Southern-inspired menu items are taken off the table at 8pm, they keep a batch of Sri Lankan curry simmering until the wee hours.

Did I miss any? Let me know in the comments.