When Menkes Developments bought the site of Filmores hotel and strip club for $31.5 million in early 2020, a condo development seemed inevitable and the purchase left some wondering what would become of the club's iconic marquee and neon signage.

A development application followed five months later, revealing a curvy condo complex for the 212 Dundas East site, though renderings notably omitted the colourful and sometimes cheeky illuminated signage that has graced Filmores' exterior since the 1980s.

Menkes has since begun marketing their 46-storey condo development for the site. And though the project has been dubbed Elektra, it looks like the electric signage giving Filmores its trademark glow may soon disappear.

At least from the current site.

With renderings seemingly finalized and the sign still conspicuously absent, blogTO reached out to Menkes for details of the marquee and sign's fate.

After repeated attempts to press for information about plans for the illuminated features, a representative told blogTO that the developer is "working with the city planning department to explore preservation options right now."

In lieu of a detailed explanation, documents submitted last July offer a better indication of what's in store for the Filmores neon and marquee.

Specifically, a heritage impact statement filed with the development application for the site sheds more light on the signage's absence in renderings.

The report prepared by heritage specialists GBCA Architects on behalf of the developer states that while Filmores is well-known and has been associated with the property since the 1980s, "it is not the most significant period architecturally."

Filmores' main flatiron-shaped building along Dundas was constructed in 1913 as the Wilton Court Hotel, incorporating the 1874-built Tasker House on George Street to the north. Buildings on site were added to the City's Heritage Register back in 2016, while the site is part of the broader Garden District Heritage Conservation District.

As a later addition to the property, the signage is not currently afforded any protection by the heritage listing.

The report goes on to state that "The current Filmores signage is not proposed to be conserved on the current site as the usage will change. The sign is not identified as a heritage attribute, yet is known to be of interest as it is a defining landmark at the intersection."

"Discussions with a local Business Improvement Area (BIA) as well as a community-led initiative are currently underway to donate the signage for a potential 'Toronto signage museum.'"

A Toronto signage museum would be an exciting future for the large installation, arguably one of the city's greatest surviving neon signs. And any such move would, hopefully, come with a complete restoration.

Even before the threat of redevelopment, the sign has been slowly deteriorating in recent years. The roof signage has been dark for years, the vertical "entertainment" neon has been reduced to just the "en," and four of the seven three-storey vertical neon tubes have burnt out. 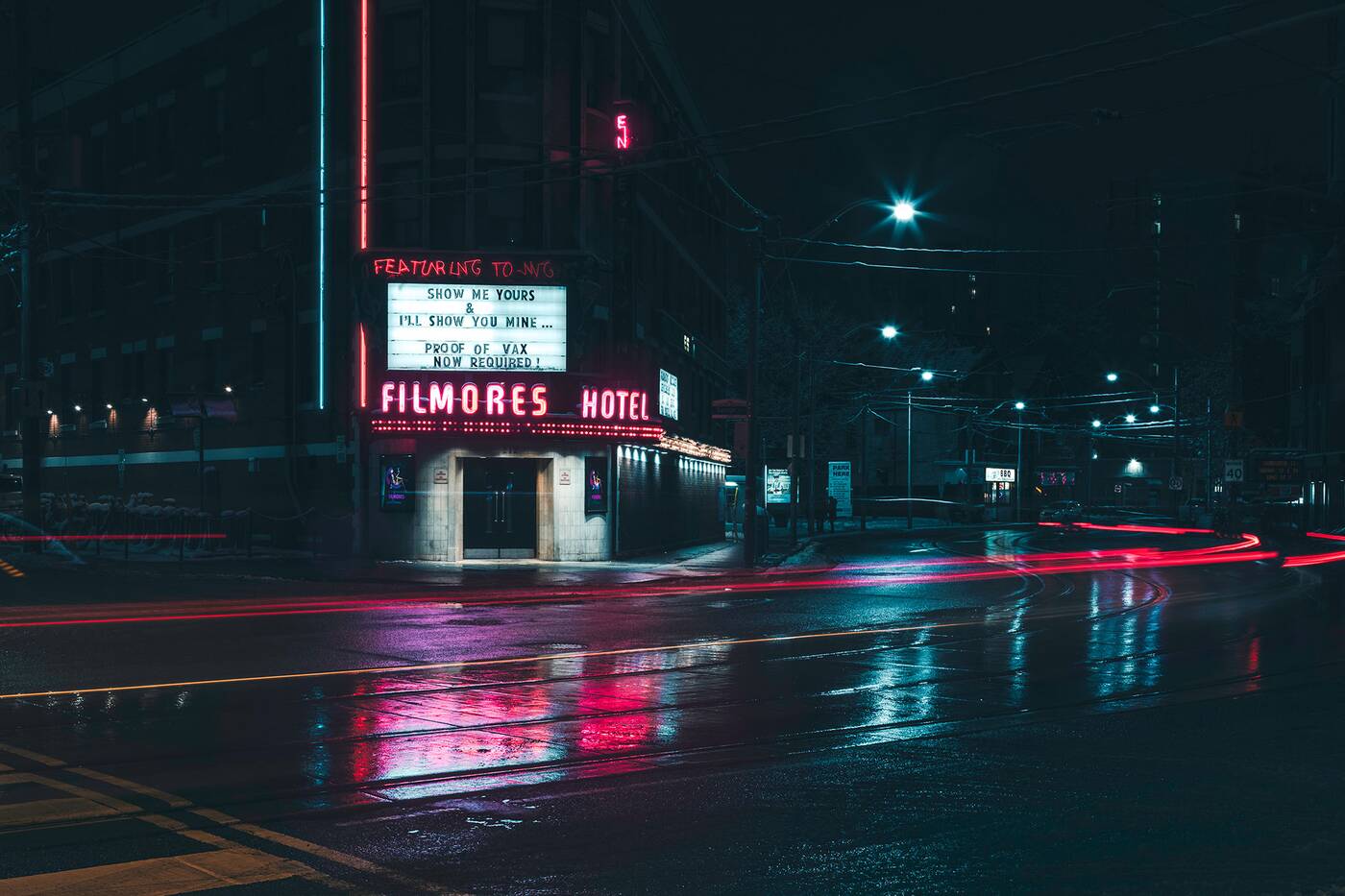 Soon after the property was sold off to Menkes, Filmores pledged in Feb. 2020 that the business would remain open for the foreseeable future. But it sure feels like that future is running out.