This is what's replacing Filmores strip club in Toronto

An iconic, uniquely-shaped building that's been anchoring the corner of Dundas and George Streets in downtown Toronto for more than 100 years is the city's latest local landmark slated to become condos.

Of course, those familiar with how mega-developers operate had been expecting as much since January, when Menkes bought the site of Filmores hotel and strip club for $31.5 million.

Filmores announced in February, amid rumours of its own impending doom, that it wouldn't be going anywhere — but planning materials submitted to the City of Toronto last week suggest otherwise.

A development application prepared on behalf of Menkes reveals that the firm is seeking a zoning bylaw amendment to build a 46-storey mixed use building at 212 Dundas St. E and 272 1/2 George Street.

A modern shot of the Filmores strip club entrance and its famous neon sign. Photo by Adrian Badacaro.

Curvy, gleaming and shaped to reflect the triangular lot it will be based on, the building will contain a total of 588 residential units if all goes as planned, broken down into 135 one-bedrooms, 298 one-plus-dens, 96 two-bedrooms and 59 three-bedrooms.

A "2 - 13 storey base building" will anchor the skyscraper while a sculpted residential tower will rise up from the middle, towering high over the rest of the neighbourhood at 154.4 metres in height.

These amenities will not include a strip club, judging by plans submitted to date, though the base building will retain the historic facade of Filmores. 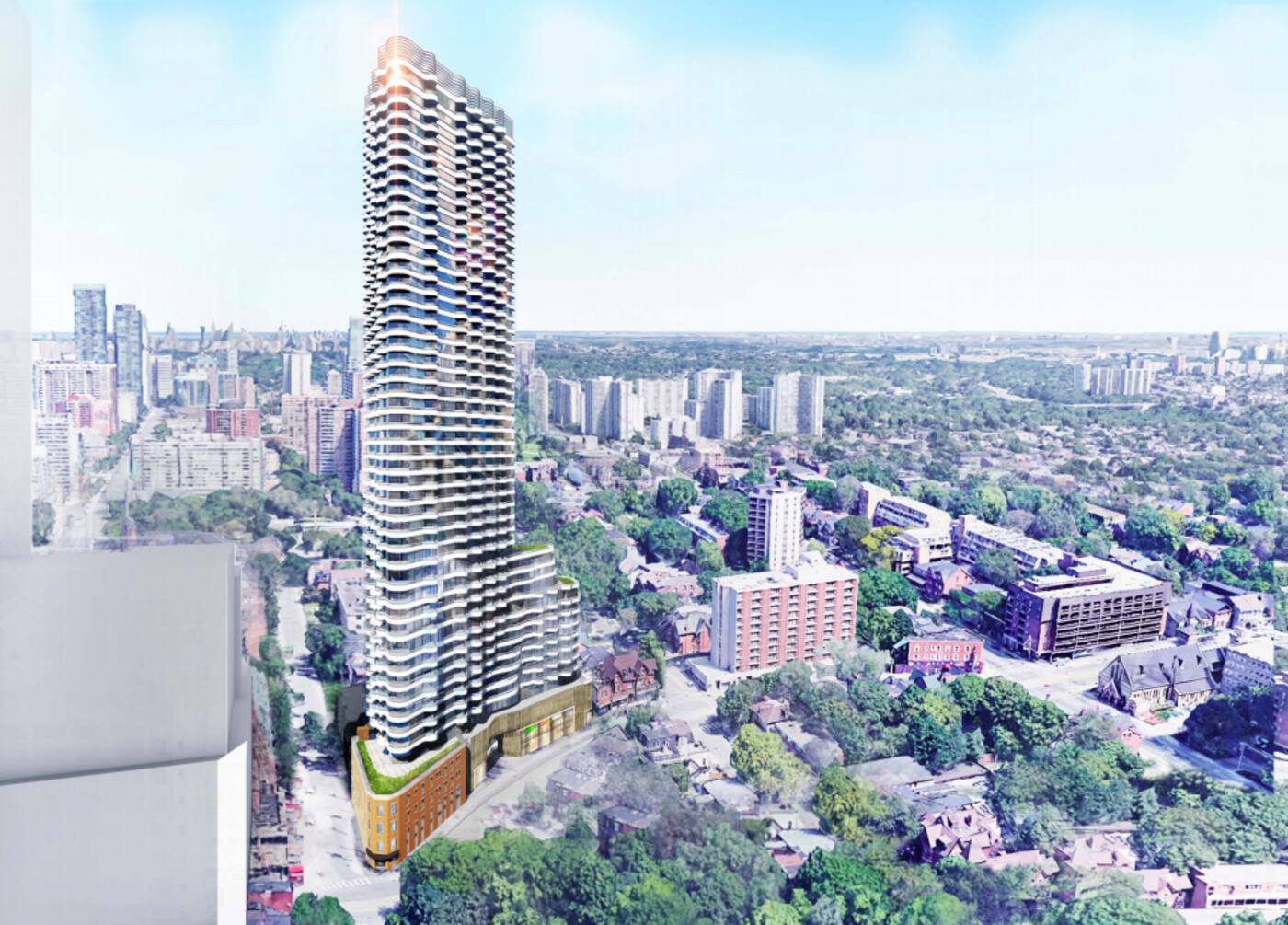 Filmores has yet to return a request for comment regarding what it plans to do as a business and when it expects it might need to either move or shut down.

Longtime residents will no doubt be sad to say goodbye to the famous local haunt, but the development of the corner also symbolizes a significant transition for the historic Garden District.

You see, the Filmores site currently contains a three-storey rooming house, one surface area parking lot, the entirety of the hotel complex and what's left of the historic Henry Tasker House, which was built between 1873 and 1874.

Originally constructed as an apartment complex called "Wilton Court," the building that holds Filmores was completed in 1913 with the Henry Tasker House incorporated into its design.

The apartments went on to become hotels managed by several different companies over the years before it was sold as an "adult entertainment venue" in 1980. City records show that it was home to a strip club called "Stage 212" and the "Fly By Night lesbian bar" before Filmores took over in 1985. 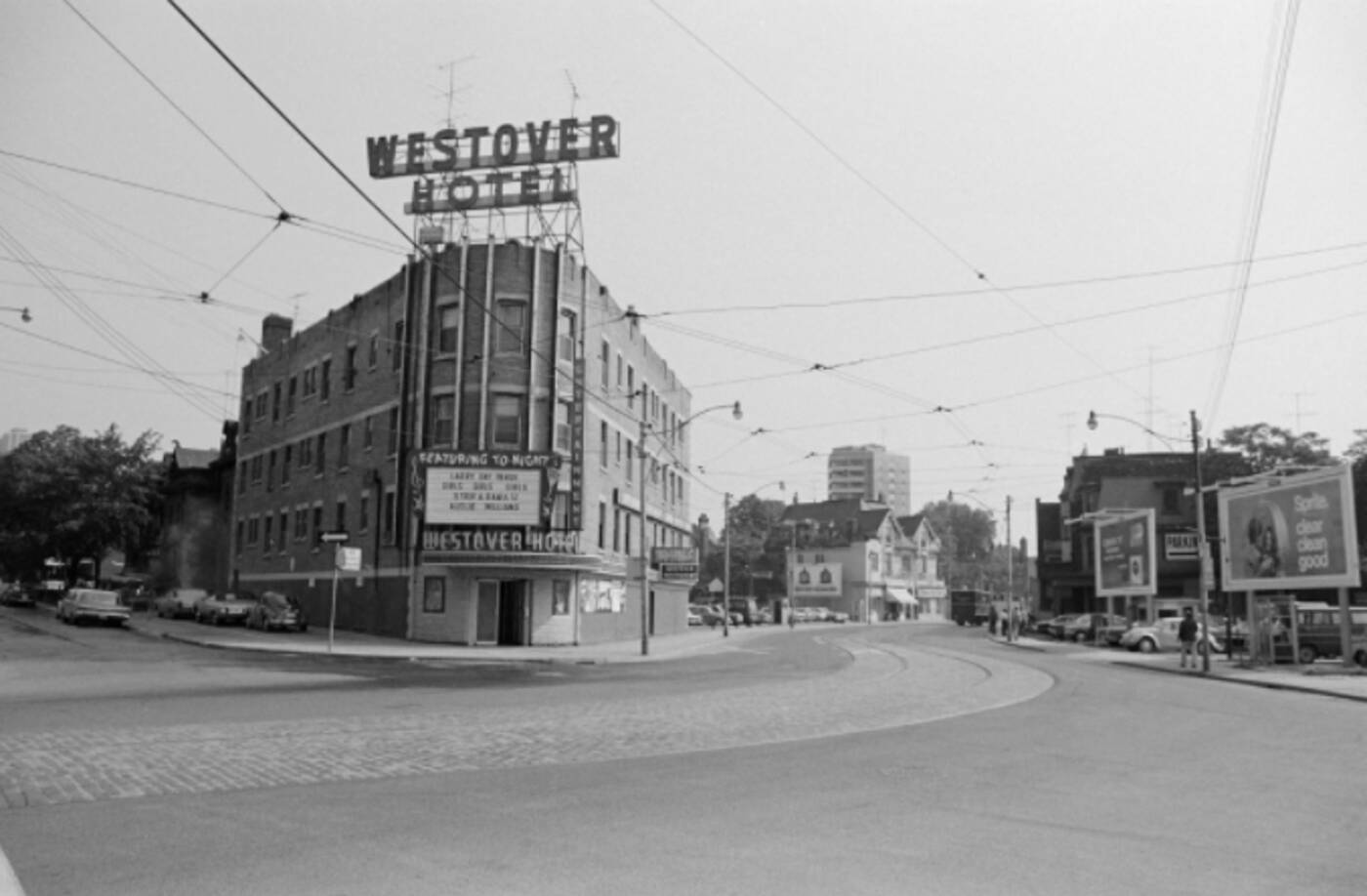 Filmores as the Westover Hotel in 1972, before it became an adult entertainment venue. Image via City of Toronto archives.

Due to its historical and structural significance, the property is listed in the City of Toronto's heritage register.

"The Wilton Court Hotel has features from Edwardian Classical style that was popular for all building types in the early 20th century and identified by the classical detailing with band courses and quoins, the symmetrical placement of the openings, and the uniform red brick cladding with stone highlights," reads an application for the building's inclusion, which was granted in 2016.

"The surviving portions of the Henry Tasker House retain the mansard roofs, decorative brickwork and elaborate flourishes that are signatures of the Second Empire style of the late Victorian era."

While plans for the new development do show that part of the building's facade will be retained and that the rooming house on site will not be touched, there's been no word yet on what'll happen to Filmores' famously cheeky signage.

Some might argue that the strip club's vibrant neon sign is itself a historic relic of sorts.