Picture being surrounded by nearly 500,000 people, all rocking out to the Rolling Stones after the end of an epidemic. This is exactly what happened at Toronto's SARSstock almost two decades ago.

After the severe acute respiratory syndrome (SARS-CoV) hit Toronto in 2003, the city's tourism industry was seriously impacted. This led to the Molson Canadian Rocks for Toronto benefit concert, otherwise known as SARSstock or SARSfest.

It broke records for being the largest outdoor ticketed event in Canadian history. 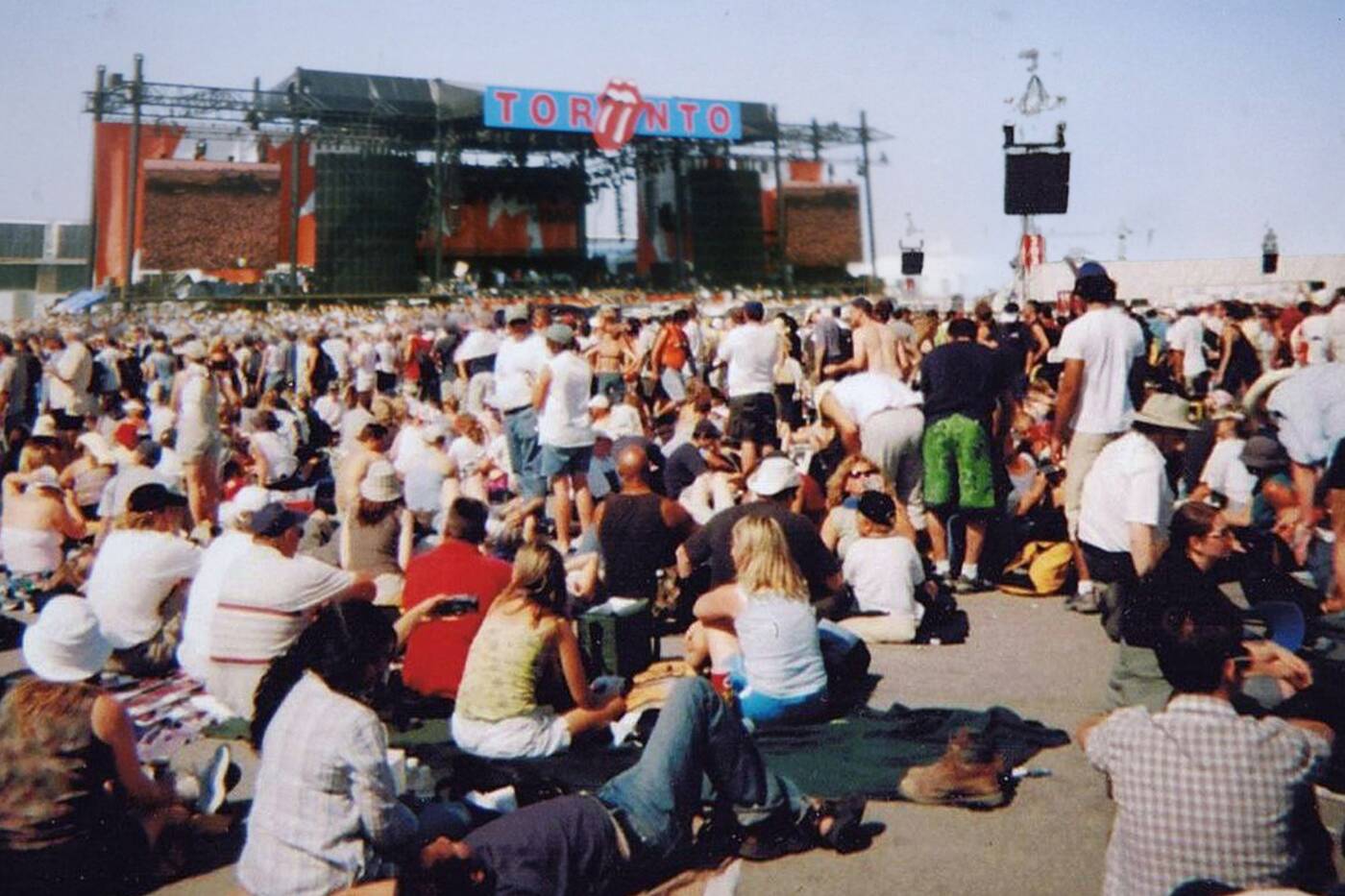 According to the Centers for Disease Control and Prevention (CDC), SARS was caused by a new coronavirus never found in people before. It was first reported in Asia in February of 2003 and spread to 29 countries. It was contained by the end of July.

After having an outbreak, Toronto was added to the World Health Organization's list of places affected by the virus. Consequentially, this scared many tourists and performers from visiting the city.

To help revive the city's reputation, a concert featuring artists like the Rolling Stones, AC/DC, Rush and Justin Timberlake was set to be held at Downsview Park. 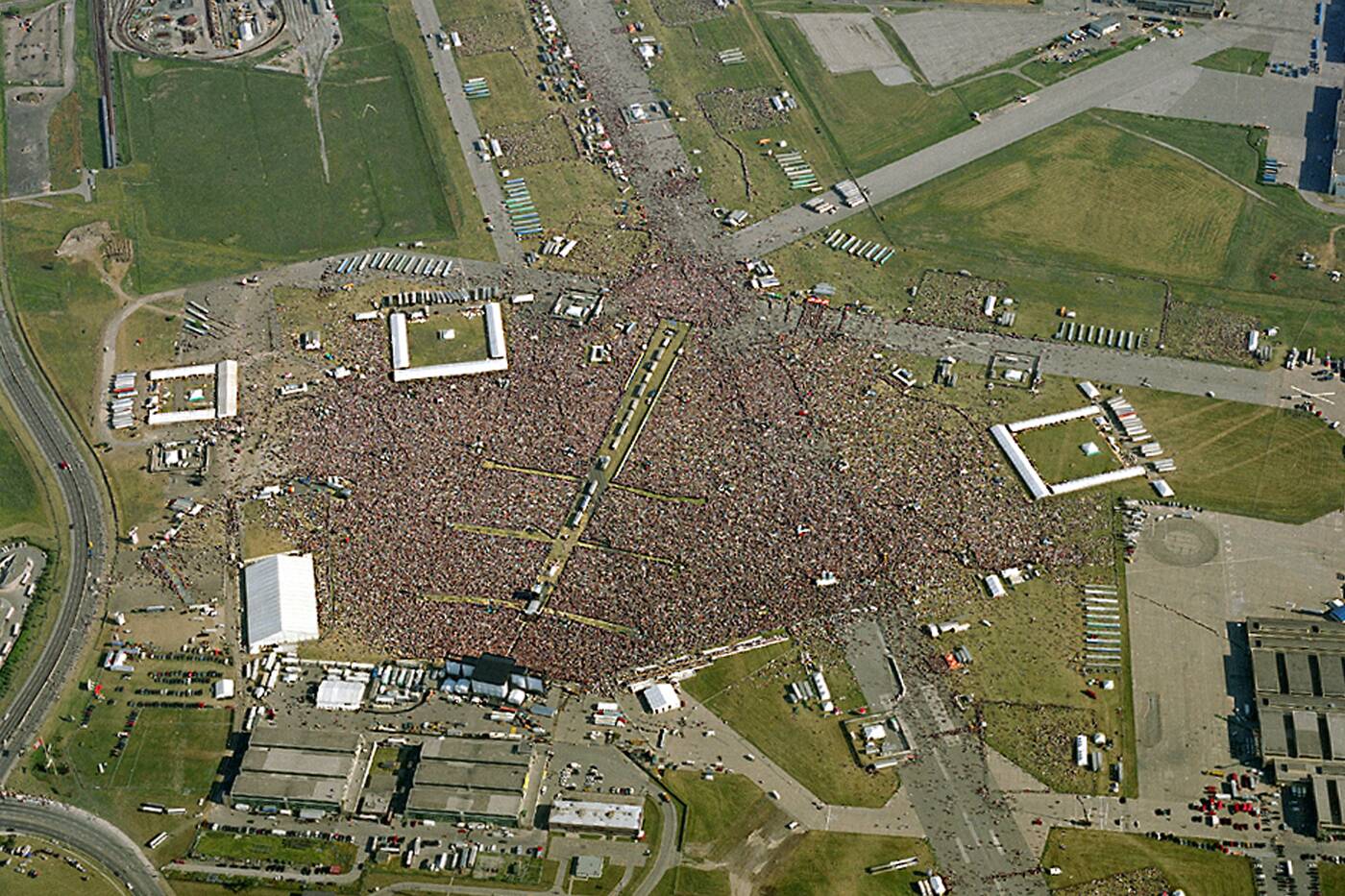 An aerial view of the SARSstock concert. Photo by Downsview Park.

The Rolling Stones, who frequented Toronto pre-SARS, were eager to help the city in any way they could. They agreed to headline the concert, which was organized in about a month to take place on July 30, 2003.

According to the CBC, over 100 hotel workers volunteered to cook burgers and sausages at the concert to help raise money for the hotel and healthcare industries. 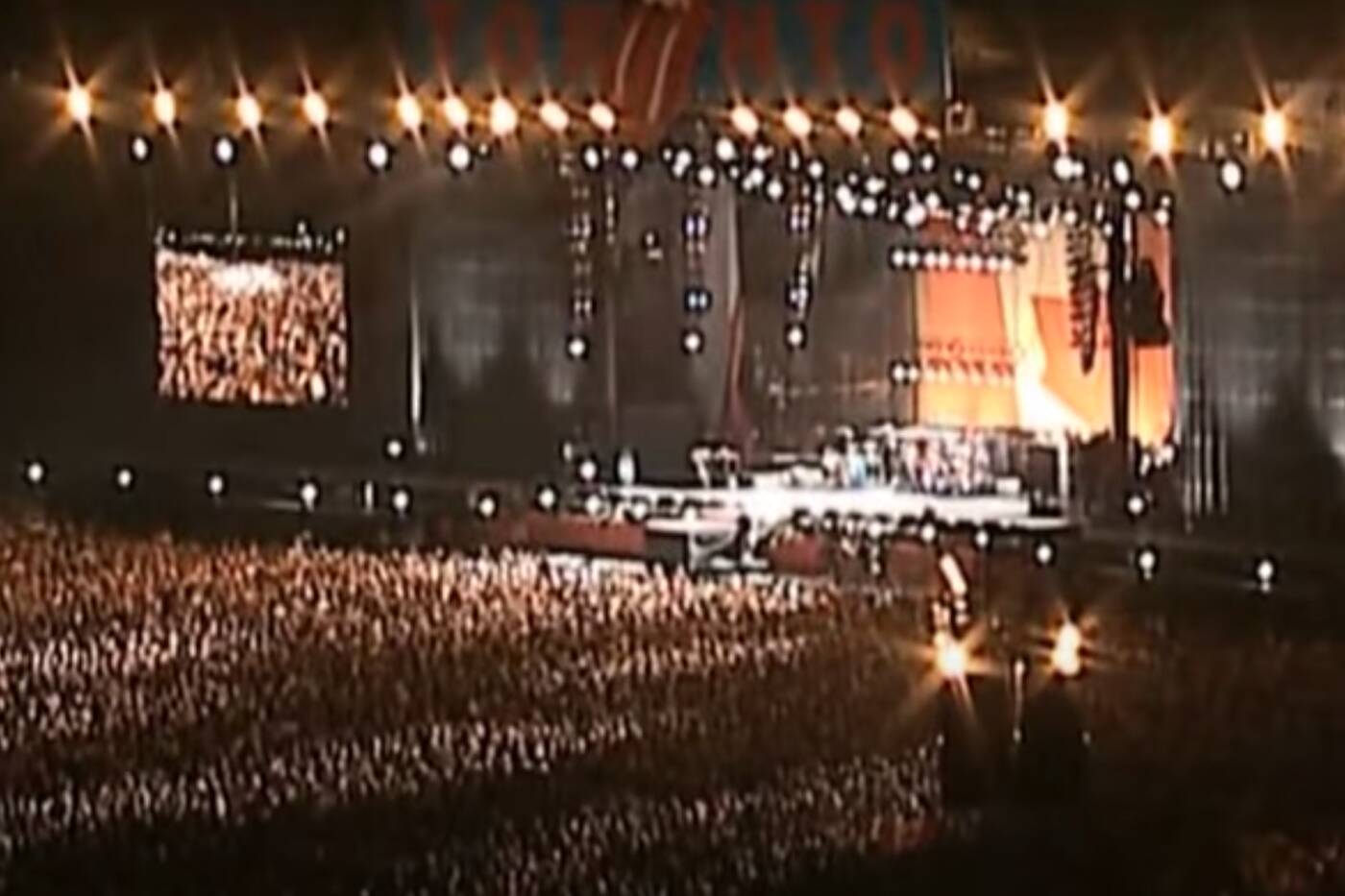 The big barbeque also served another purpose. Earlier that year there was a reported case of mad cow disease in Alberta, which made other countries wary of Canadian beef.

"The idea behind SARSfest was that if self-involved rock-'n'-roll stars and politicians didn't feel they were risking their lives by touching Toronto's doorknobs and digesting its beef, then neither should other people," The New York Times reported.

Politicians from all over Canada attended the event, hosted by actor Dan Aykroyd and broadcast by the CBC and MuchMoreMusic.

Even beloved Canadian actress Catherine O'Hara made an appearance on stage to address the crowd."You've been through so much and you've come through," she said. 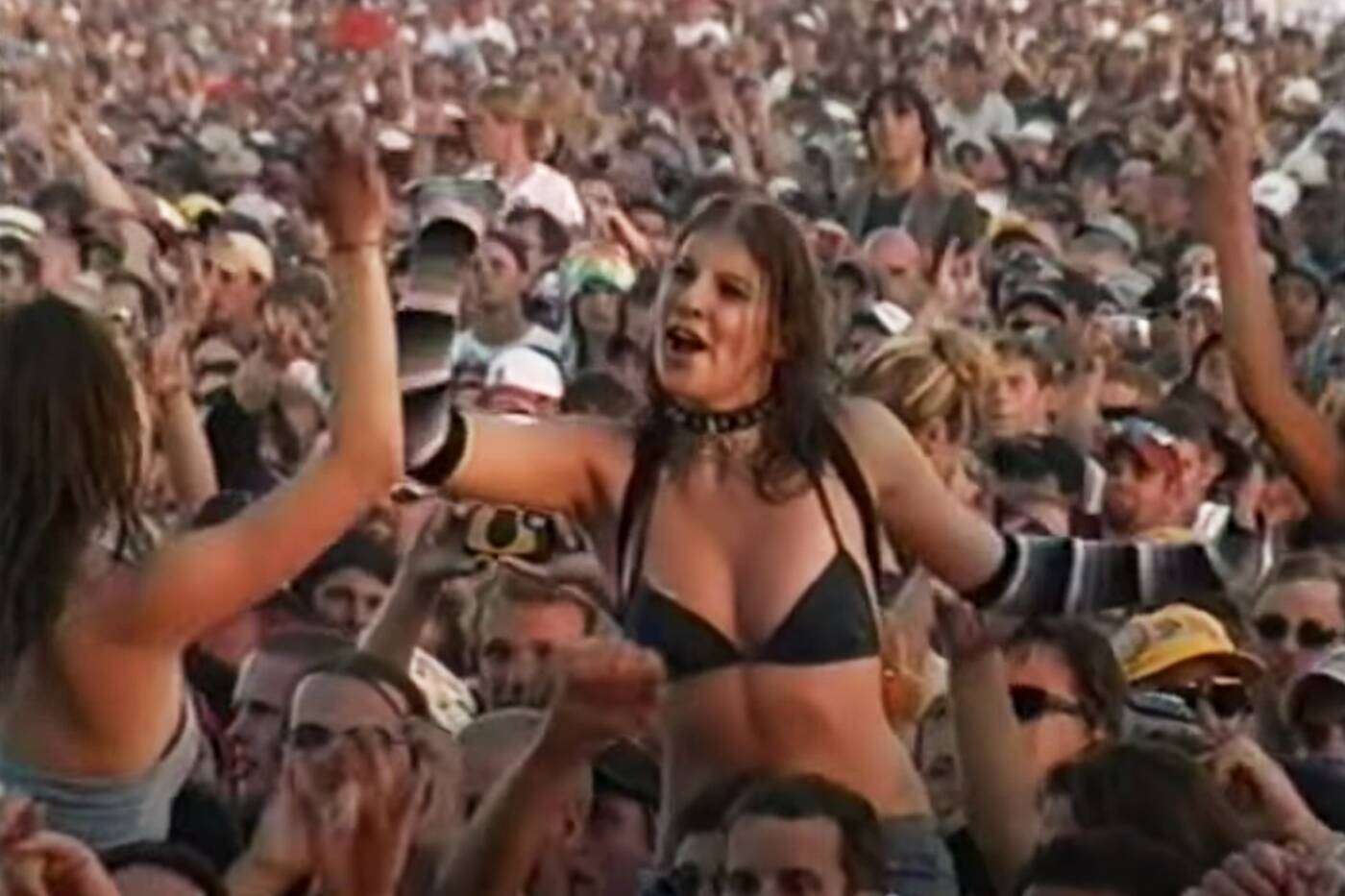 The hot July day was filled with music, singing and cases of heat exhaustion. People packed the park to hear their favourite artists, like the Flaming Lips, The Guess Who, Sam Roberts and Blue Rodeo.

One act, however, did not receive a very positive response. When Justin Timberlake took the stage he did not impress the classic rock fans in the audience.

In a rather un-Canadian way, his performance was met with booing and a general distaste from the crowd. While singing he dodged various items being thrown at him, including bottles of urine.

He appeared years later on The Graham Norton Show, where he described the experience saying "I had no idea how bad [the performance] was going to go" and "I still have a lot of trauma this incident." 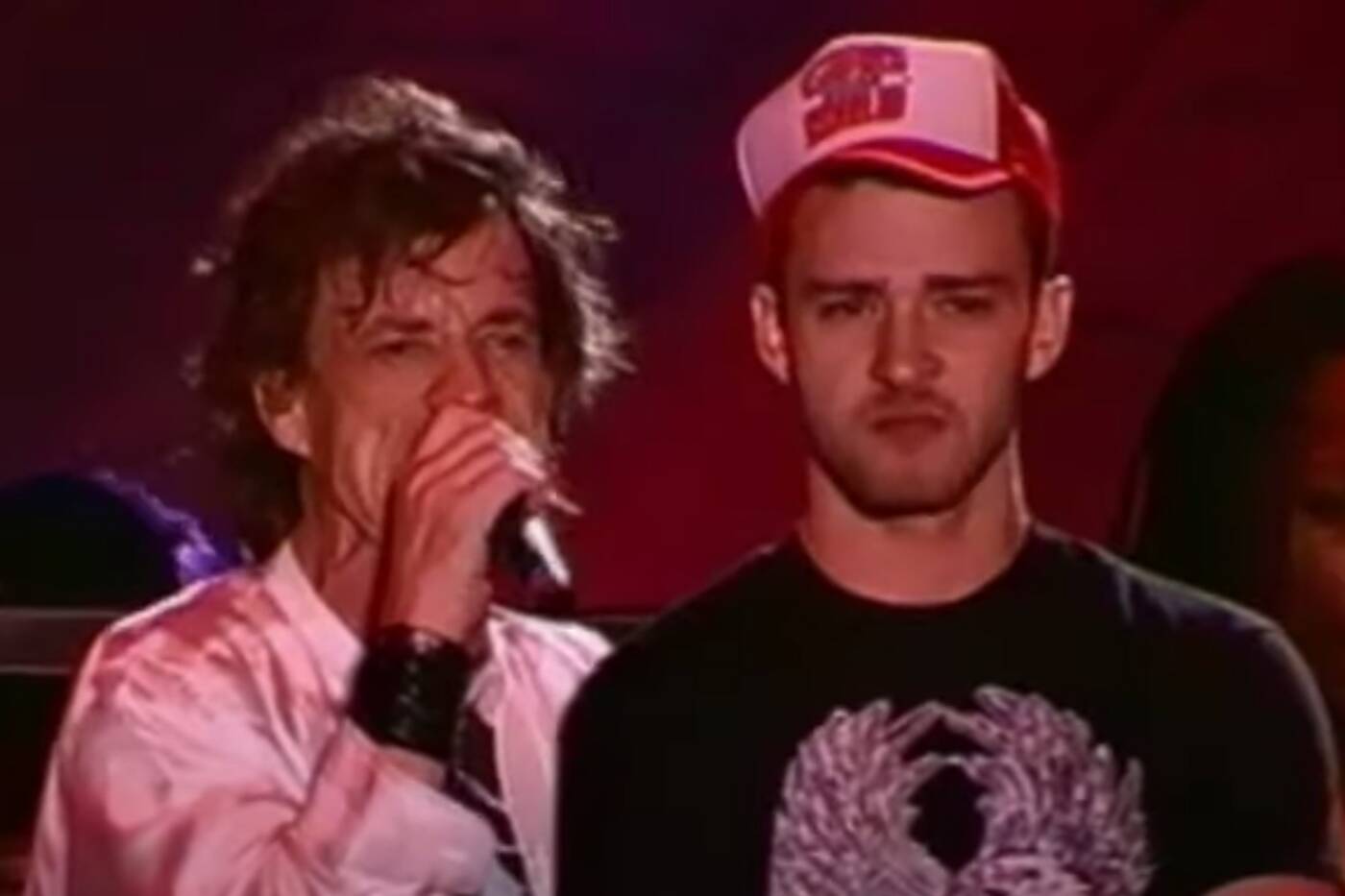 Justin Timberlake on stage with the Rolling Stones in 2003. Photo by Anthony R.

Later on in the concert, he came back on stage to perform with the Rolling Stones and was defended from the crowd by guitarist Keith Richards.

Despite this less than pleasant incident, the concert was still an iconic moment in Toronto's history.

The Rolling Stones donated half of their merchandising profits to the SARS relief fund. Additionally, $1 from ticket sales and the net profits of official merchandise also went to the fund.

Not only did SARSstock break records, raise money and support the city, it provided a concert of a lifetime to many.