Does Alvvays live up to the hype?

On Saturday night, surf-pop quintet Alvvays capped a whirlwind two-month tour with a packed, sold-out concert at the Opera House. It also capped an amazingly successful year for the band - the kind of year that so many musicians dream of but can rarely ever achieve.

With just one full-length record under their belt, Alvvays have become the unequivocal Toronto Music Success Story for 2014. Just about any indie band can expect adulation from a smattering of blogs and college radio stations, but Alvvays have surpassed that circuit to lock massive mainstream media's gaze, with features in The Globe and Mail, TIME magazine and even a slot on Rolling Stone's top albums of the year (well, the latter also put U2's questionable iTunes spam record in their number-one slot, so grain of salt, but still). 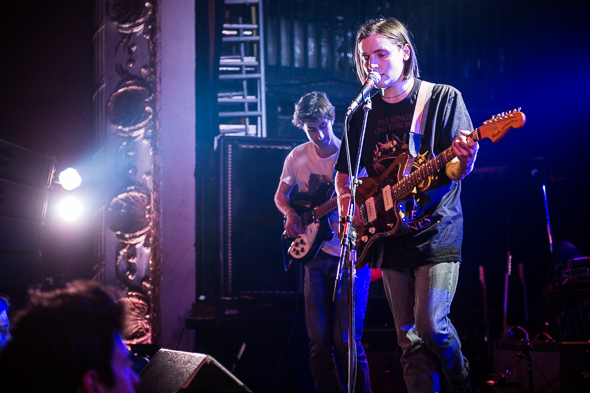 The stage is still empty when I arrive, but the venue is already more than half-full of all-agers eager to catch the last Alvvays gig of the year. It's an ample crowd for openers Elsa and Moon King, two other up-and-coming Toronto acts who, just like the headliners, rollick in the vintage dream pop sound. 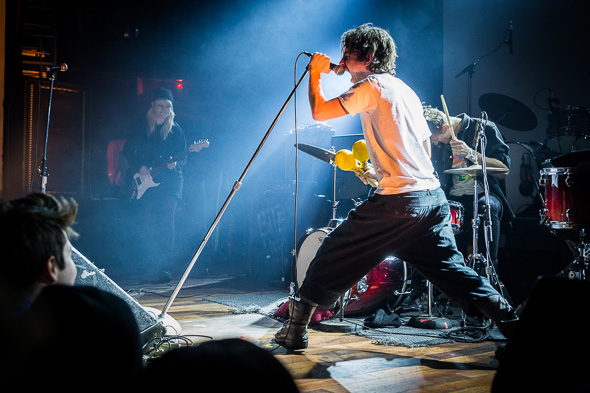 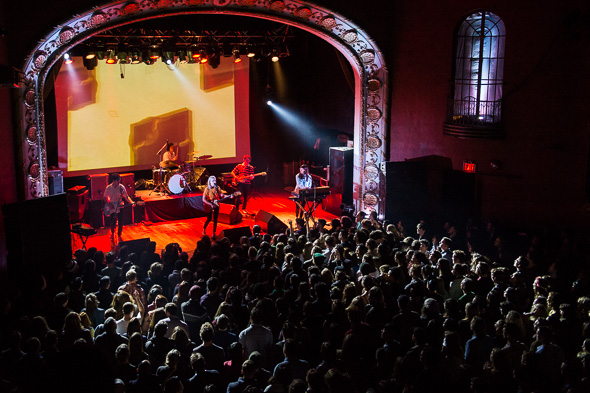 As the stage dramatically dims for Alvvays' arrival, the audience swells with elation - it's the kind of response I'd normally expect for a more prolific, mid-career act, maybe Metric or Stars. When frontwoman Molly Rankin and her cohorts come into view, even they seem blown away by the crowd's enthusiasm. 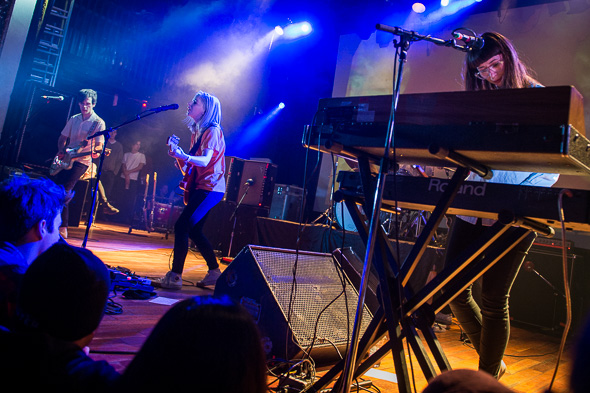 Launching into "The Agency Group," the group pulls off a quick, roughly 35-minute set (remember, they have just one album) with taut, road-worn precision. I'm immediately struck by how Rankin's voice sounds deeper and more resonant than on record - though that may just be a byproduct from months of relentless vocal workouts on tour. But her emotive-yet-carefree singing style, an odd duality that anchors the band's sound, is still unmistakable.

My trips to the Opera House are usually for metal bands (last time I was here, it was for these guys), so it's a bit of a novel experience to be part of an audience here that isn't feverishly forming circle pits and screaming at the top of their lungs. Still, the packed crowd is animated throughout Alvvays' performance, dancing and singing along to major singles like "Archie, Marry Me" and "Adult Diversion." 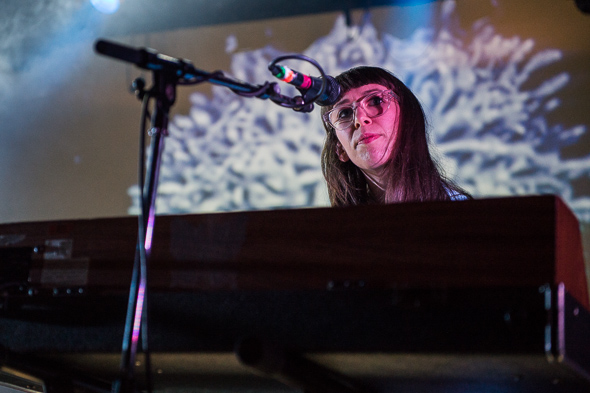 As the projection screen behind them plays kaleidoscopic loops of 1950s stock footage, Alvvays plows through a setlist mostly pulled from cuts off their debut LP, interspersed with a handful of B-sides - "Underneath Us" and "Your Type" - plus an encore with a cover of The Primatives' "Out of Reach" and freshly penned tune "Haircut." 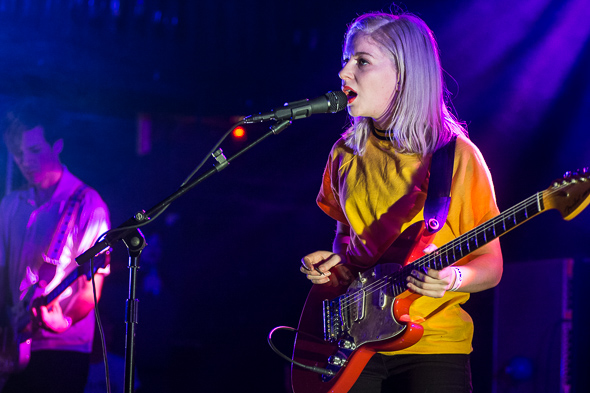 Through it all, Rankin is ebullient, bouncing and seeming ready to leap off the stage at any moment. She relays a few road-war stories about the past two months with candid humour: how they've driven into ditches, missed flights and likely pissed off some Dutch train operators. The whole band is obviously thrilled to be back home in Toronto, where people have been proud to watch their meteoric rise. 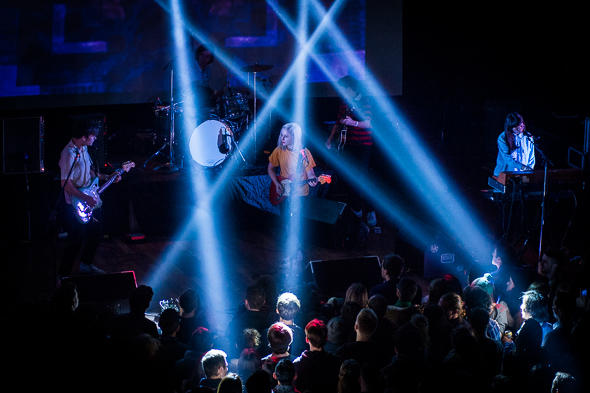 Alvvays is clearly still adjusting to their newfound stardom. "Does everyone know we're called Always?" Rankin asks towards the end of the night with mild trepidation, likely referencing the confusion that may come from their name's unique spelling. "Just checking!" she laughs. Even with all the sold-out shows and press accolades, they still exhibit these short moments of uncertainty, not fully sure if they've "made it" quite yet. 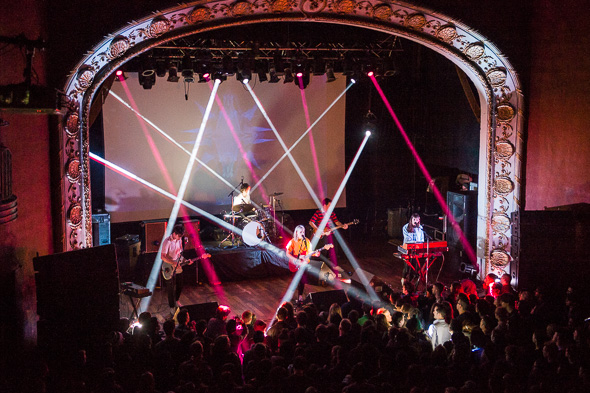 I have to say, it's awfully endearing. But given how polished and professional they already sound at this stage of the game, that uncertainty will likely start to fade soon. With a name like "Always," they're clearly in it for the long haul. 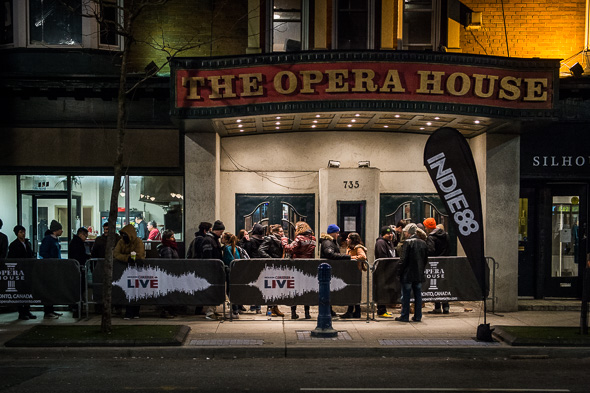