Gladstone House is the oldest hotel in Toronto and is just as much an arts hub as it is a 132-year-old spot for boutique accommodation.

Formerly the Gladstone Hotel, its new name reflects the stone engraving above the front door and its original name back when it was a grand railway hotel. 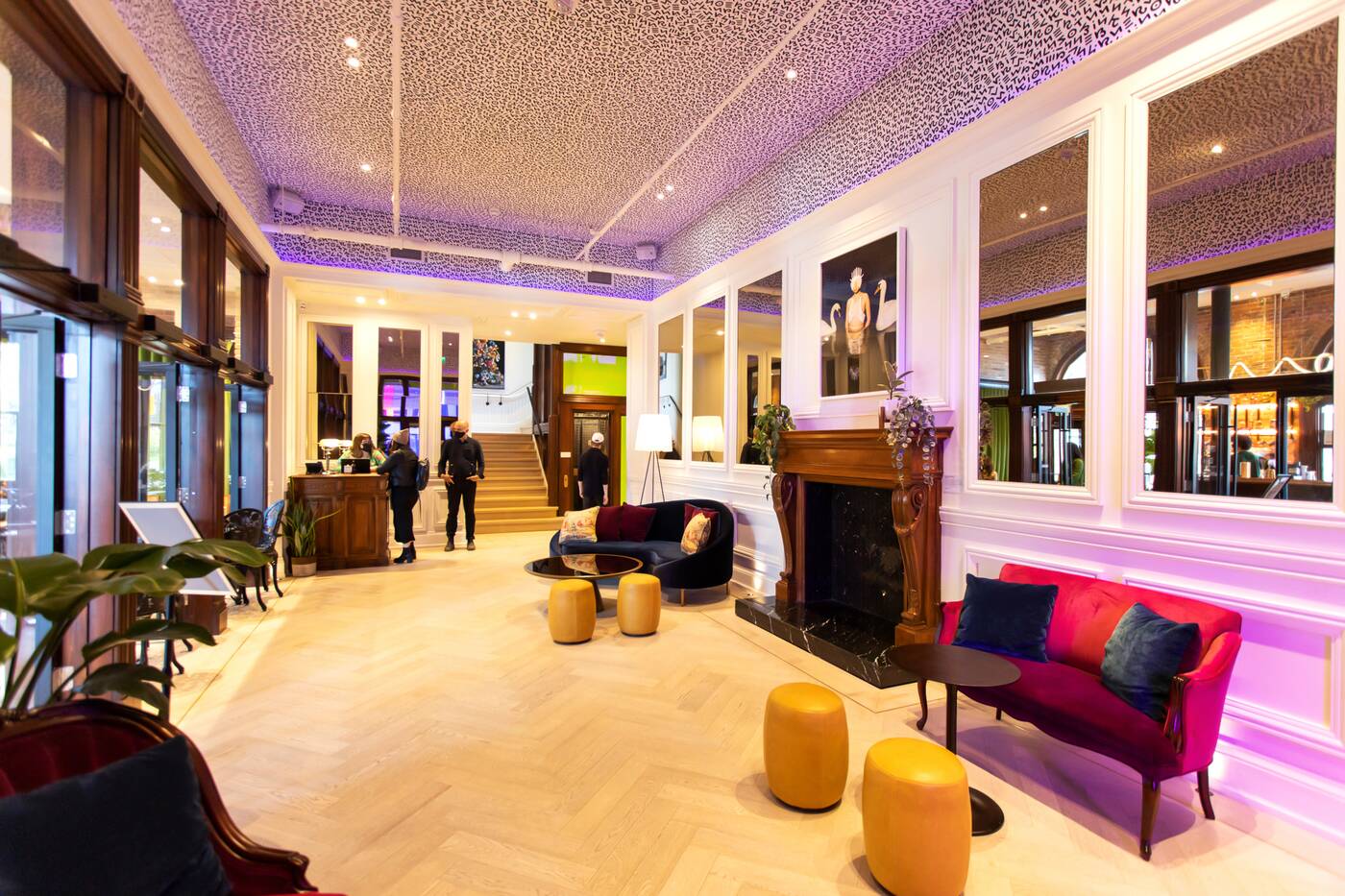 Bought up by the same developers as the Broadview Hotel, the 1889-built hotel features a mix of historic and modern when it comes to its fresh look and plenty of artwork that changes every four to six months.

The front lobby, which used to be taken up almost entirely by a large desk with lots of dark wood, has transformed into a bright and open space. 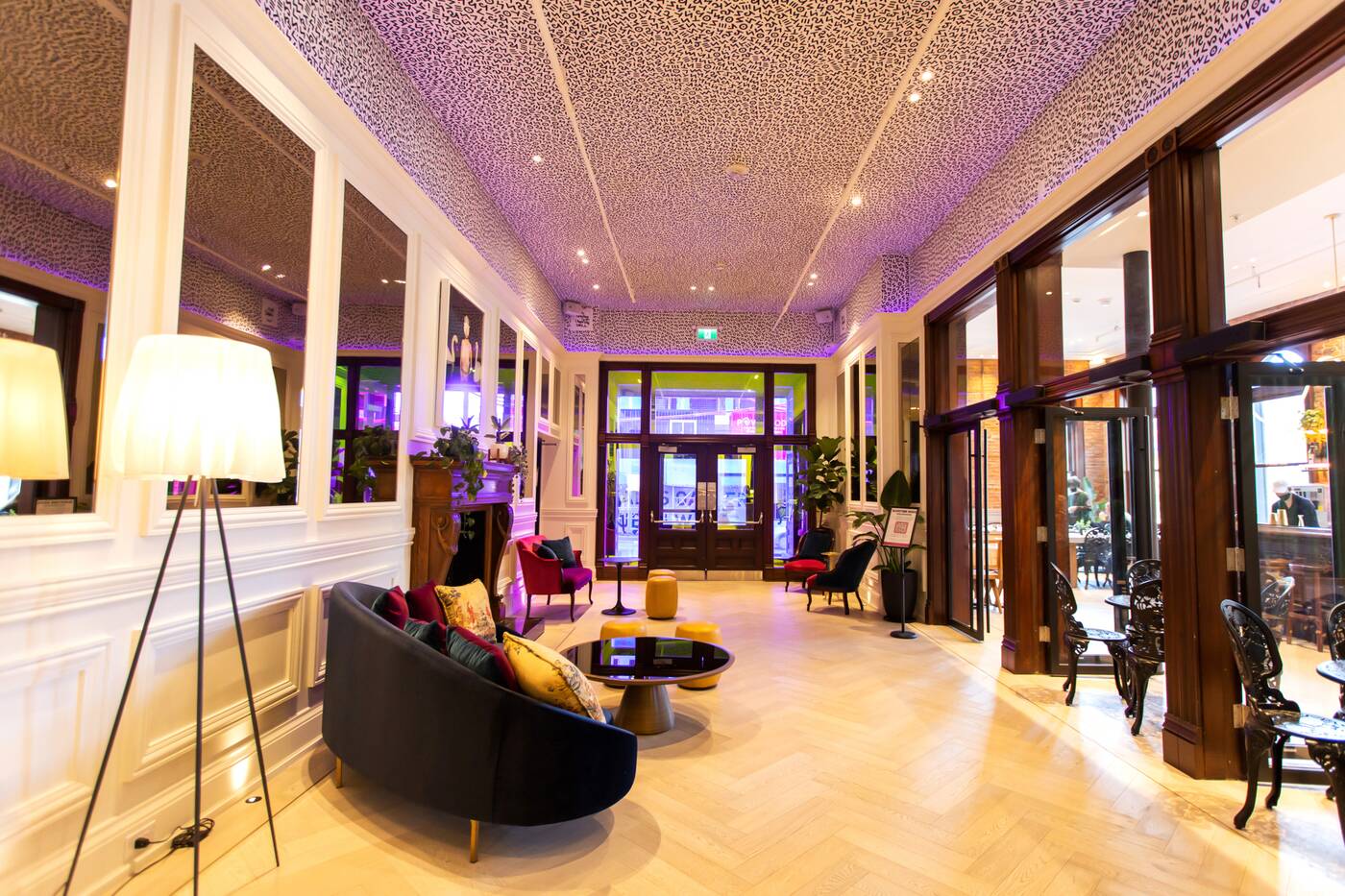 The ceiling was handpainted by Toronto artist Bryan Espiritu and includes over 13,000 symbols. Look long enough and you'll even spot a few hidden words and phrases. 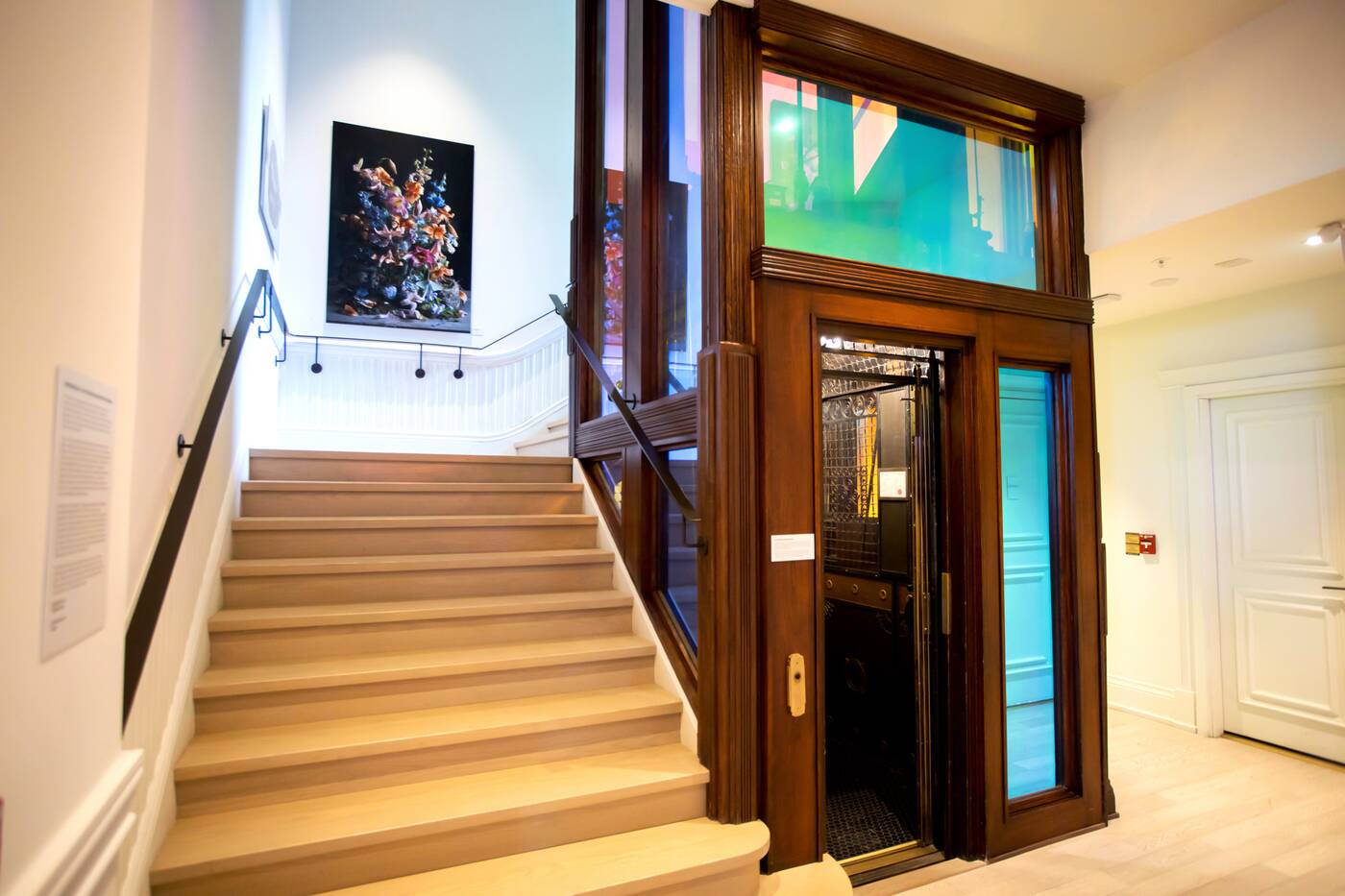 One thing that has stayed the same is the elevator, formerly known as the Gladstone Cowboy elevator after the old elevator operator who also used to perform at the hotel bar as a country singer. 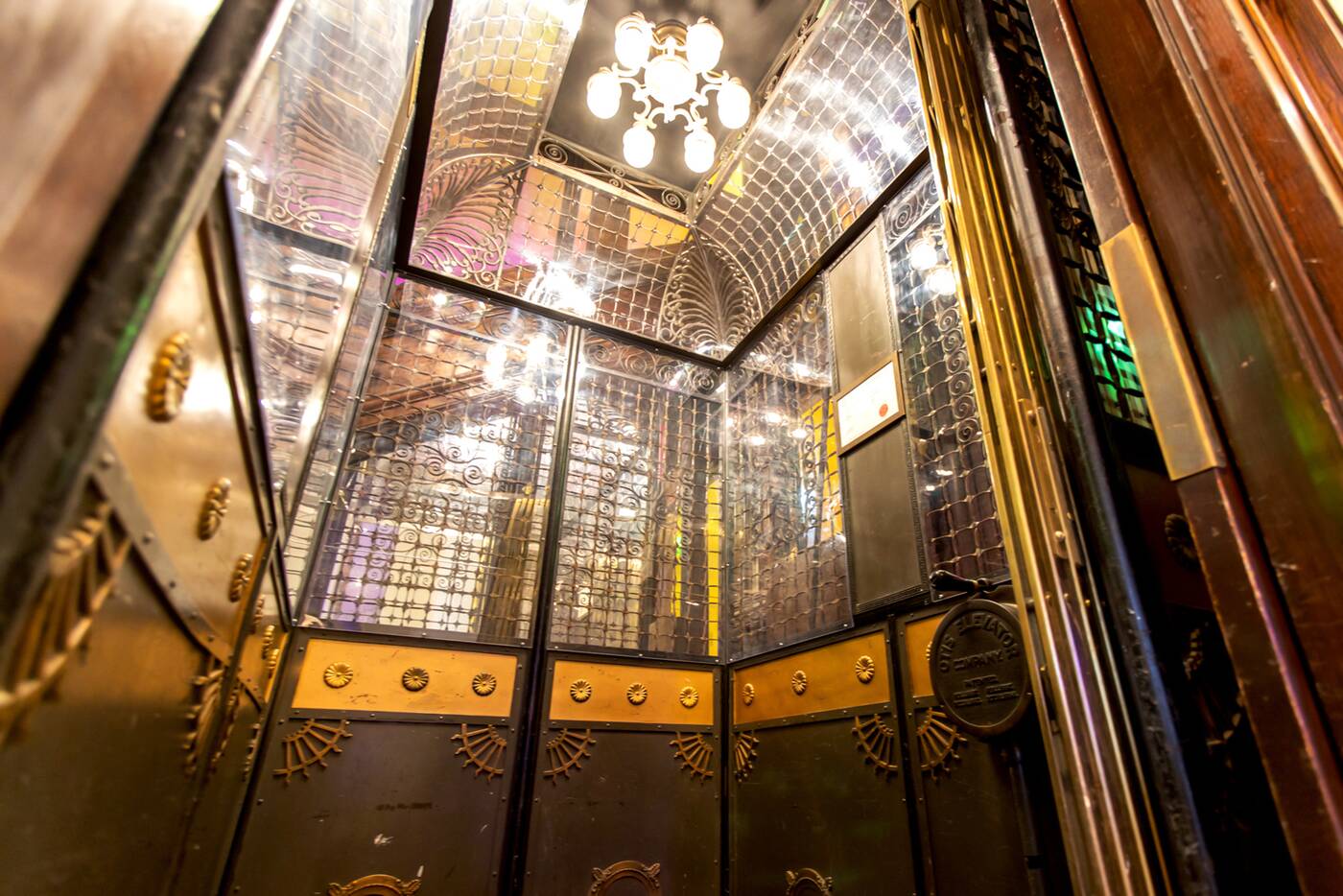 Installed in 1907, the restored antique lift is one of the last hand-operated elevators in the city. It used to be covered by drywall but was uncovered in the previous 2005 renovations and underwent a major tuneup before being able to operate again. 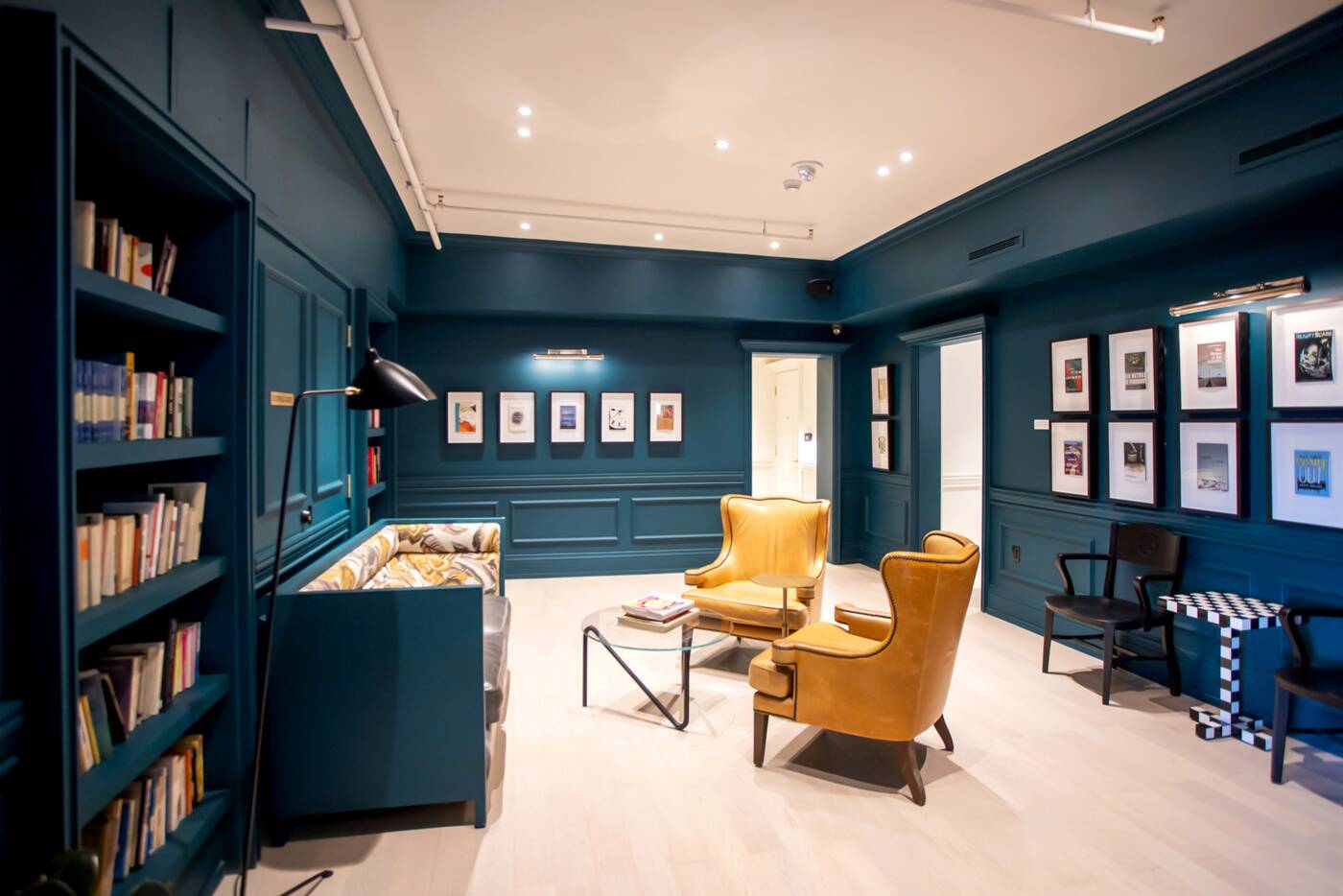 In the library, guests can find a collection of books from the current owner's late aunt that can be read here or in their room. Those framed are ones that have had book launches at the hotel over the years. 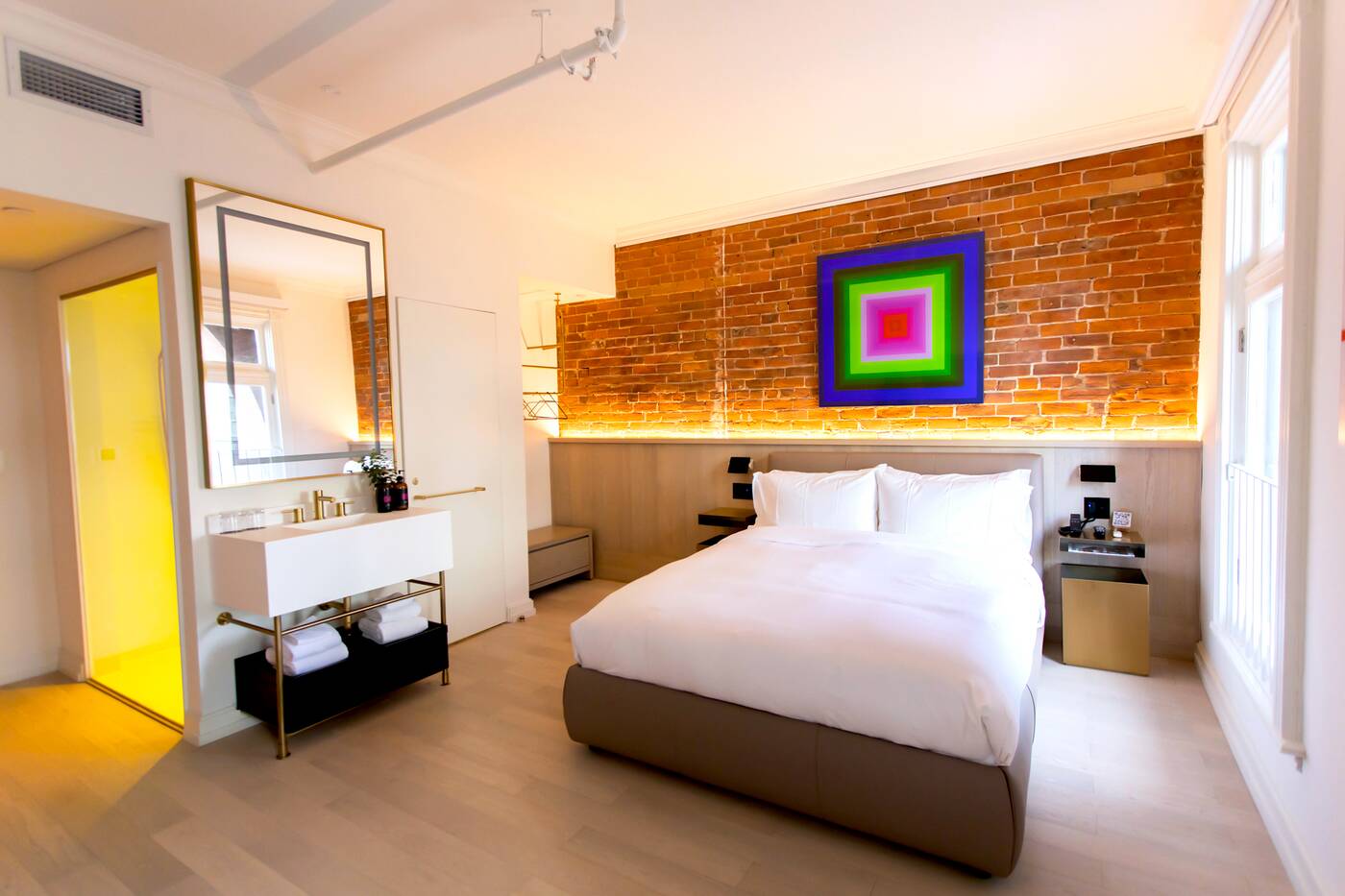 There are 55 suites, and soon all will feature unique pieces from local artists. The artwork, which ranges from paintings and photography to ceramics and murals, was picked out from over 500 applications after a callout to artists back in November 2020. 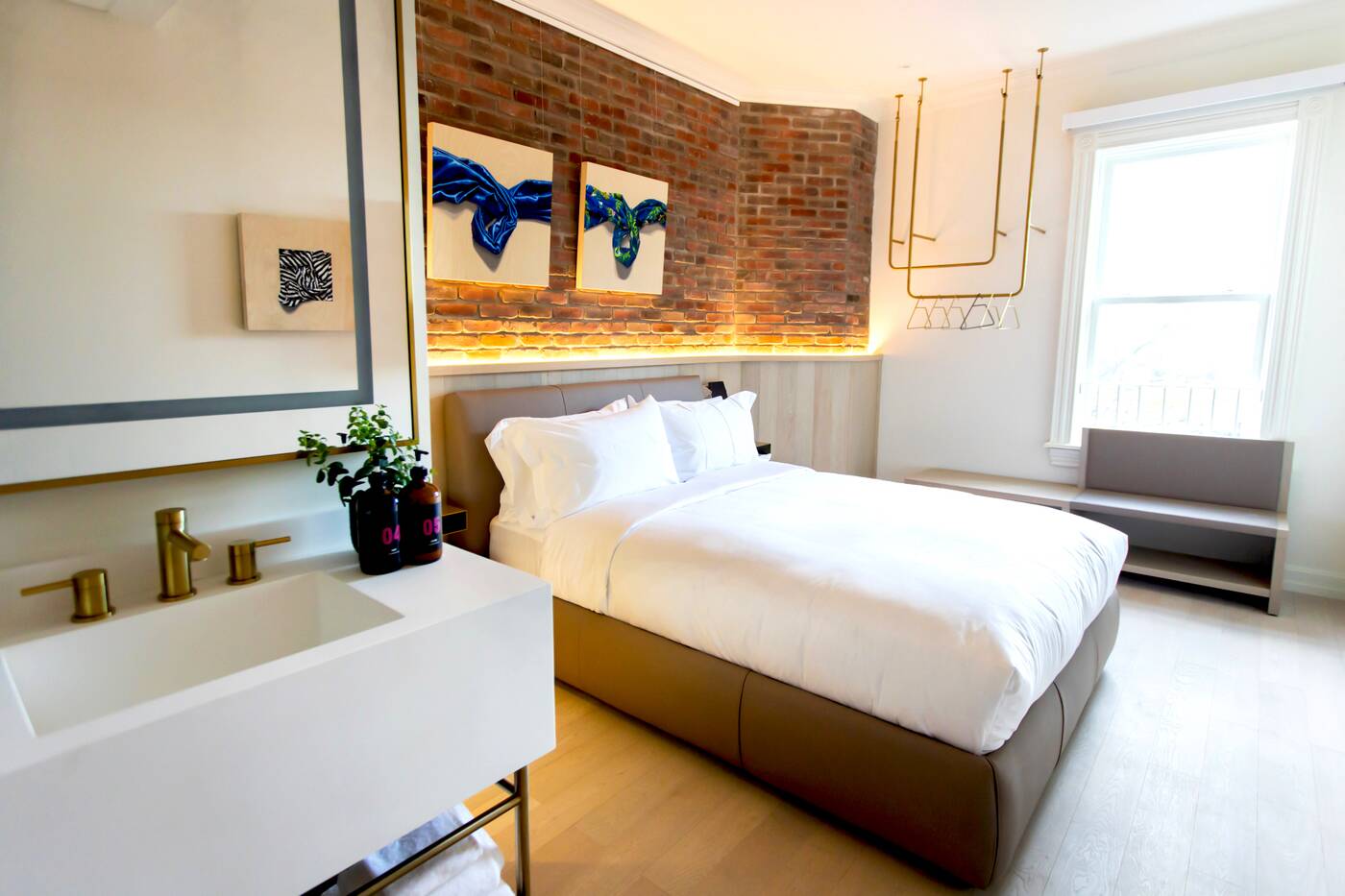 One includes a collection of super-realistic drawings by artist Kaitlin Mason who uses pencil crayons to make it look like fabrics are bursting from the white frames. 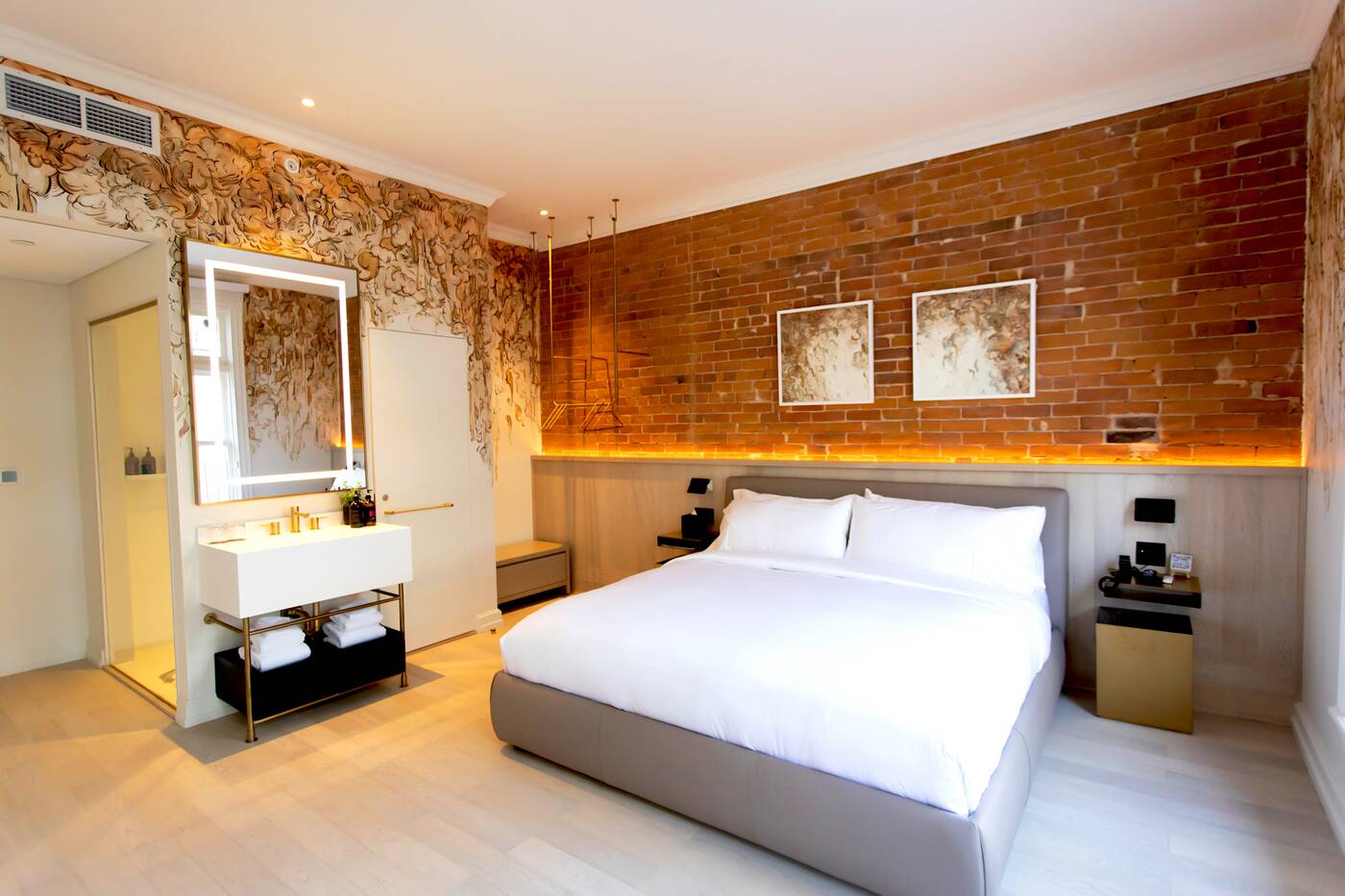 Another features original brick and a wall mural by Cole Swanson made by replicating the mineral pigments from High Park, the Cheltenham Badlands, as well as the brick from the hotel. Birds, elephants and horses can be found within the designs. 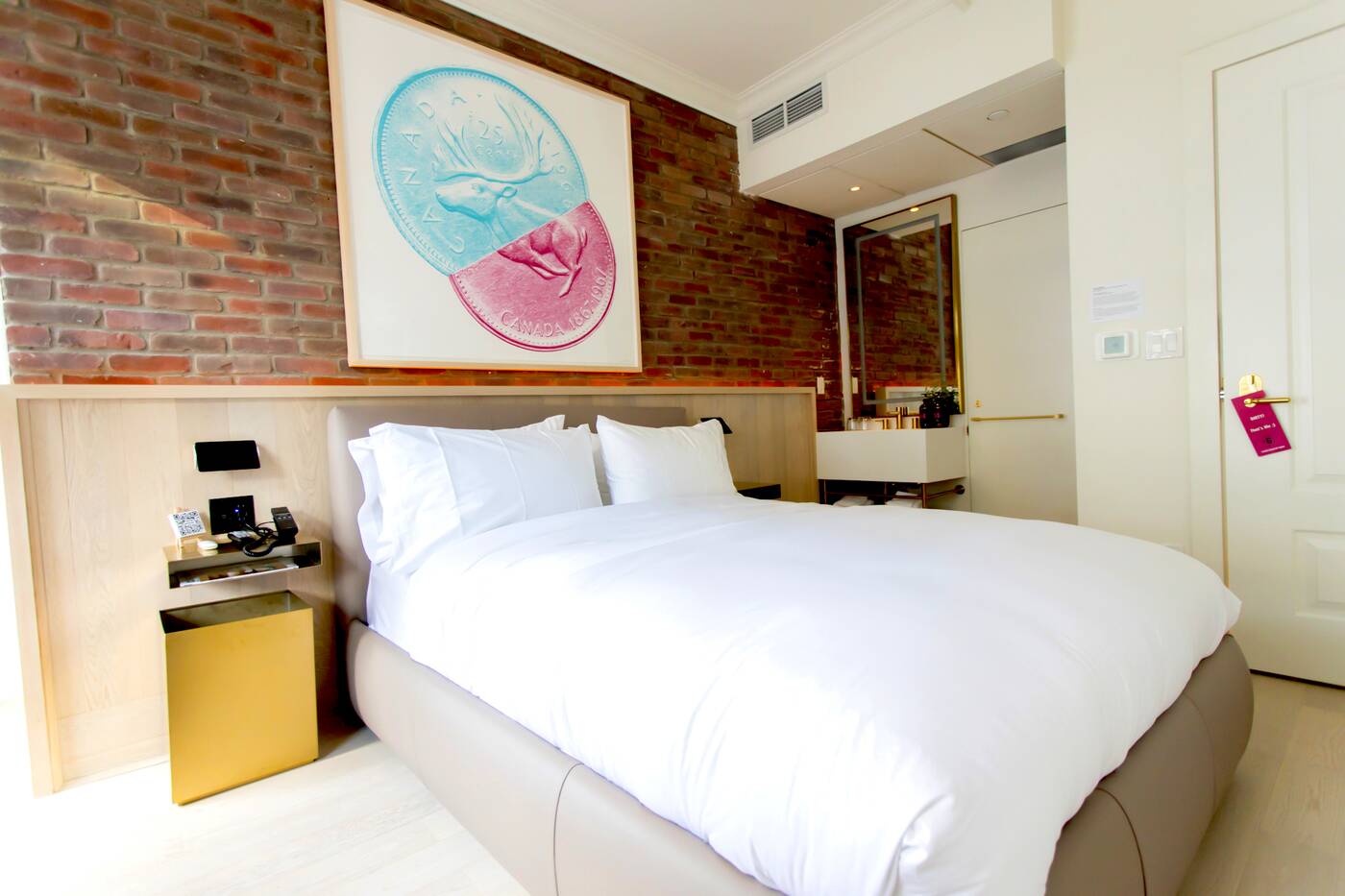 Micah Adams is the creative mind behind the made-up creatures in the next room we see. He collects coins and mix and matches them to create all-new beings. A large drawing sits over the bed while other smaller coins are scattered throughout the room. 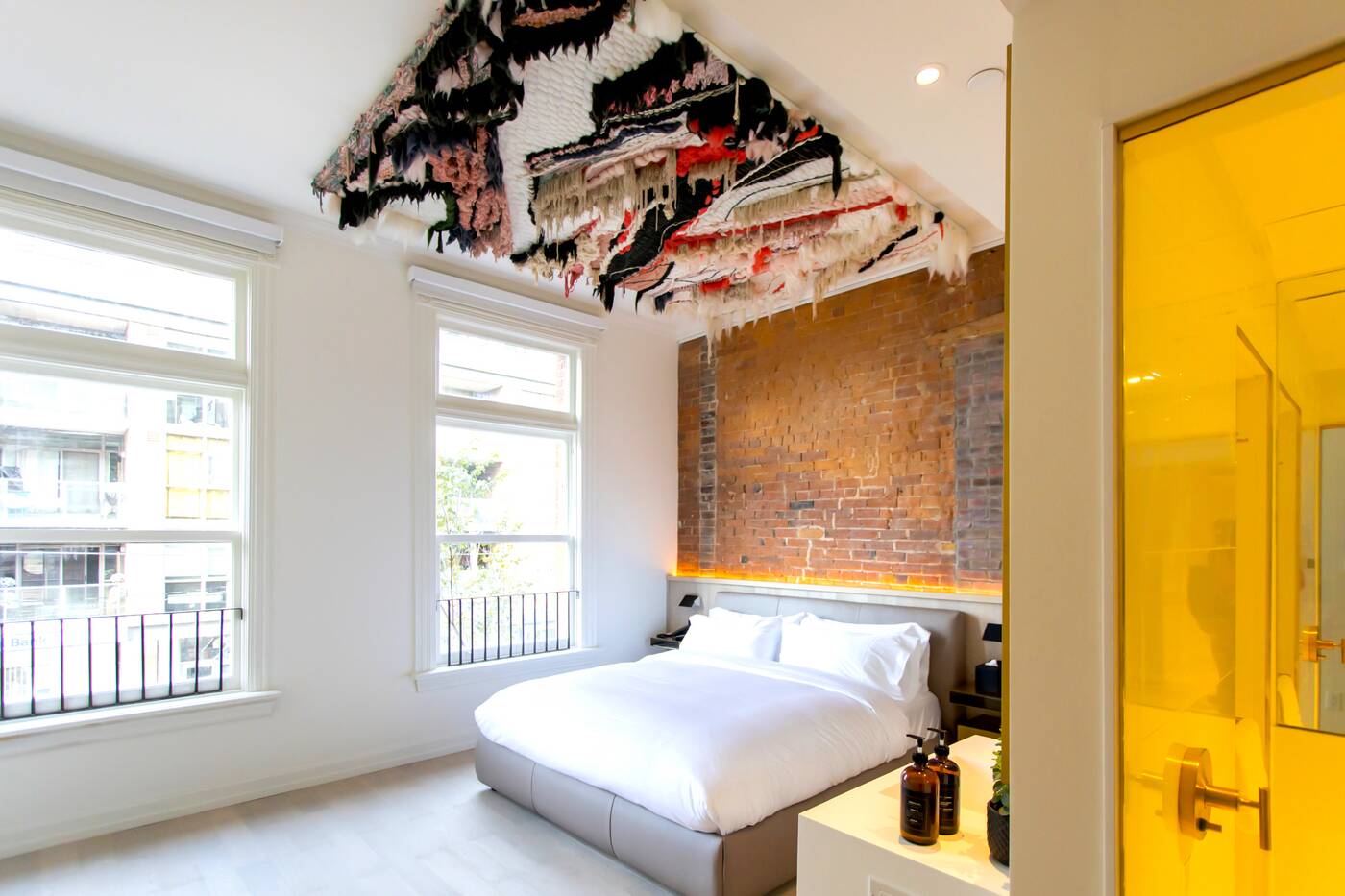 The hotel is also home to likely the only suite with a tapestry on the ceiling made by textile artist Jen Arron. Weaved entirely by hand, it's inspired by a sunset over Sawyer Lake in Algonquin Park. 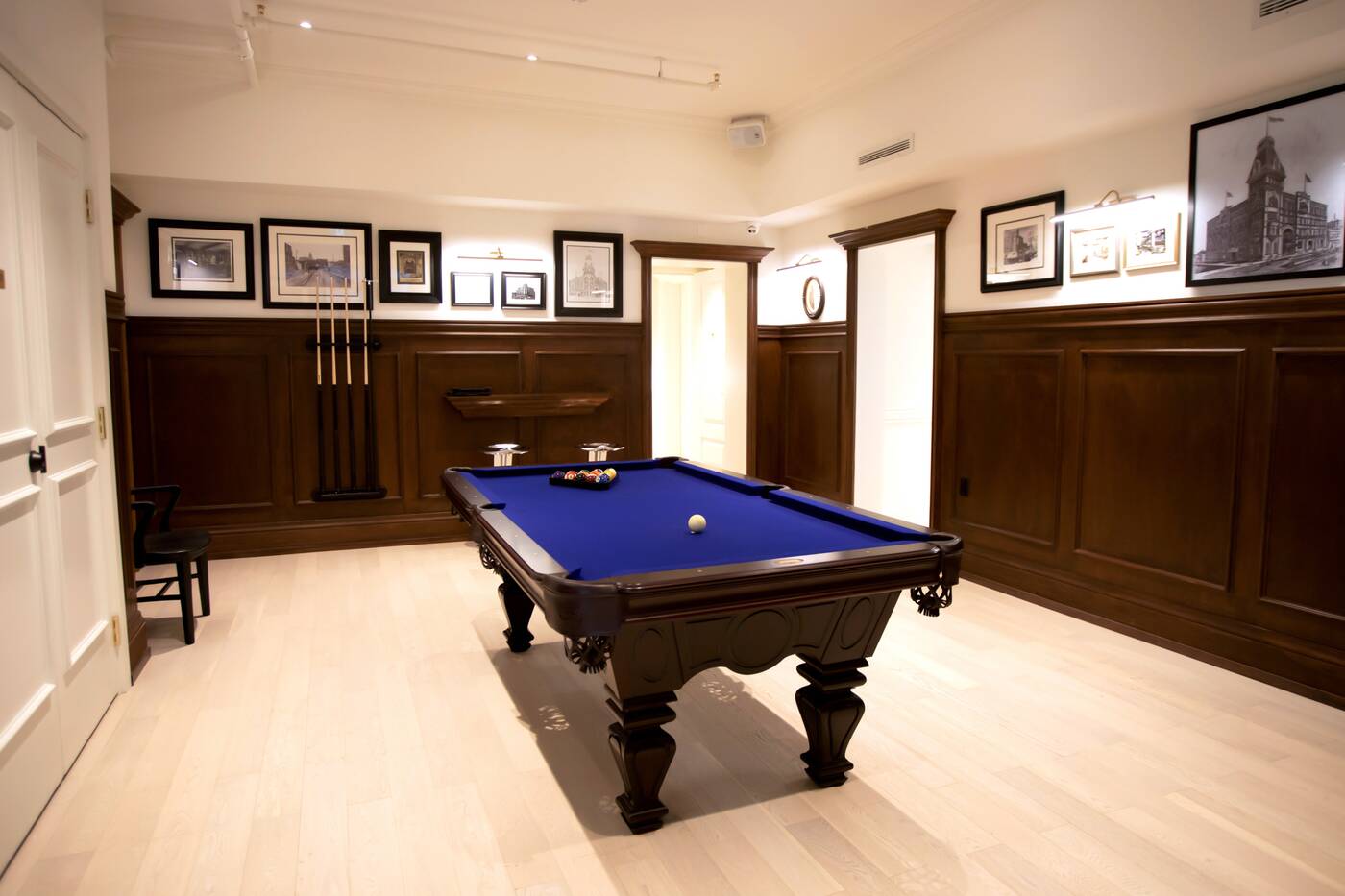 The billiards room has a purple pool table in the center and plenty of old photos on the walls, one is of the general manager from the 1920s and another shows how the hotel looked when it first opened.

Even one of the refurbished monogram chairs from the old Melody Bar sits in the corner. 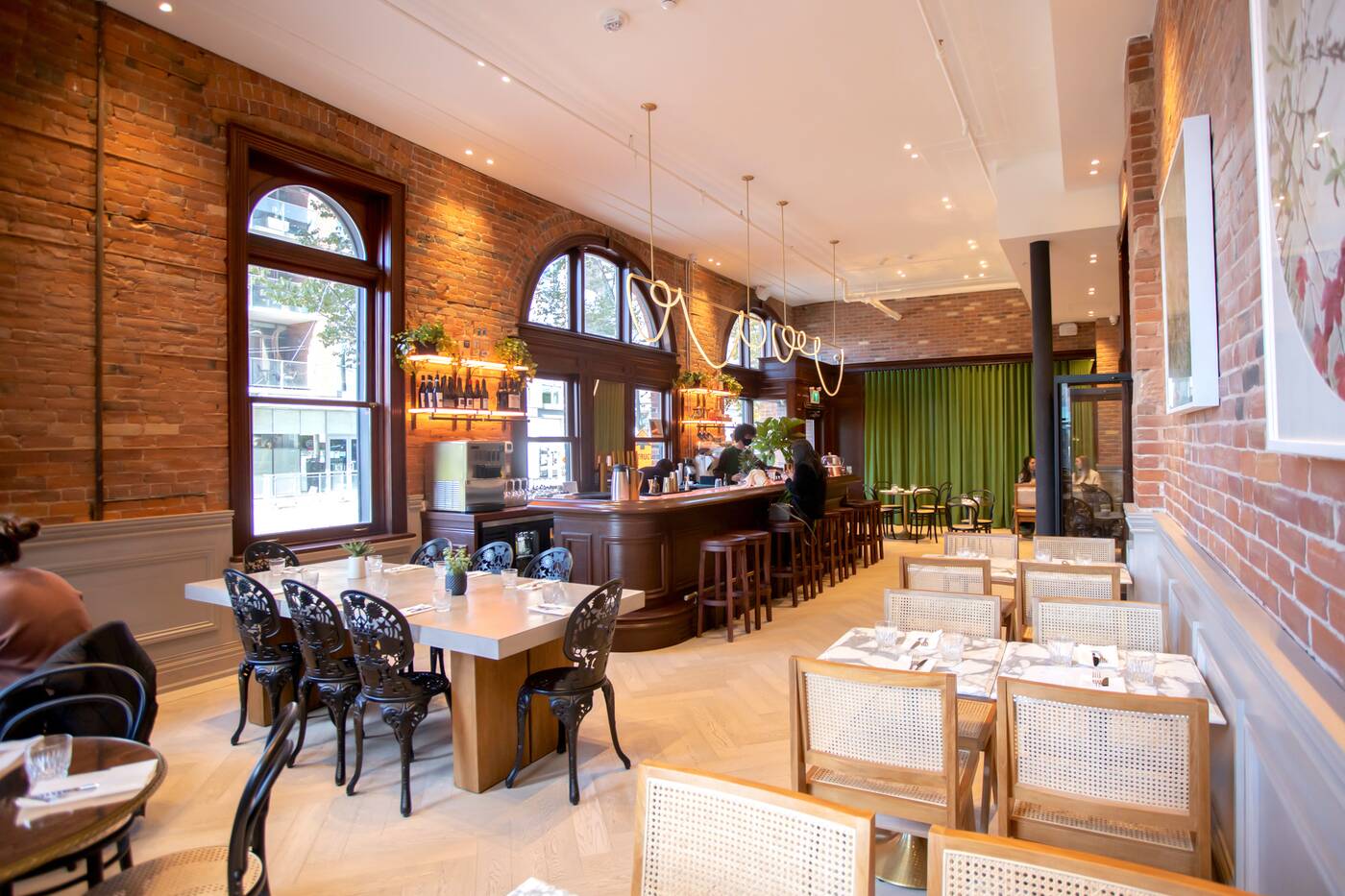 The bistro connects off the lobby and is open every day from breakfast until late. Find more exposed brick here combined with a modern light fixture above the solid wood bar. 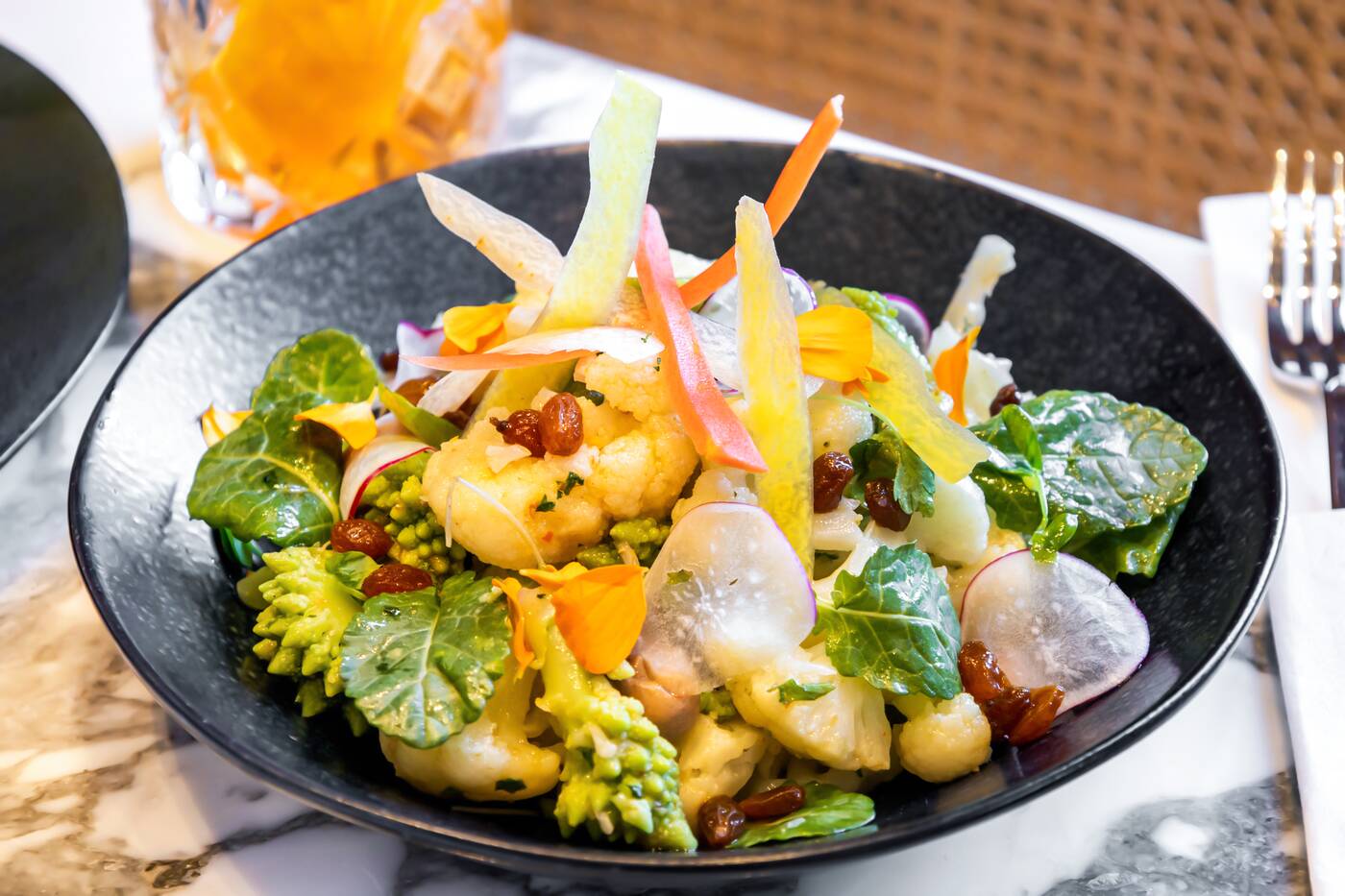 The North African and Middle Eastern-inspired dishes are whipped up by executive chef Richard Singh. Staff favourite cauliflower salad ($16) is a healthy mix of Romanesco, radish, carrots, arugula and dressed with chermoula vinaigrette and sultana mostarda.

Another vegetarian option is the fire-roasted eggplant ($22), a work of art in its own respect. Freekeh, arugula, green beans, harissa yogurt and tahini-garlic sauce make for a delicious filling inside an eggplant shell. 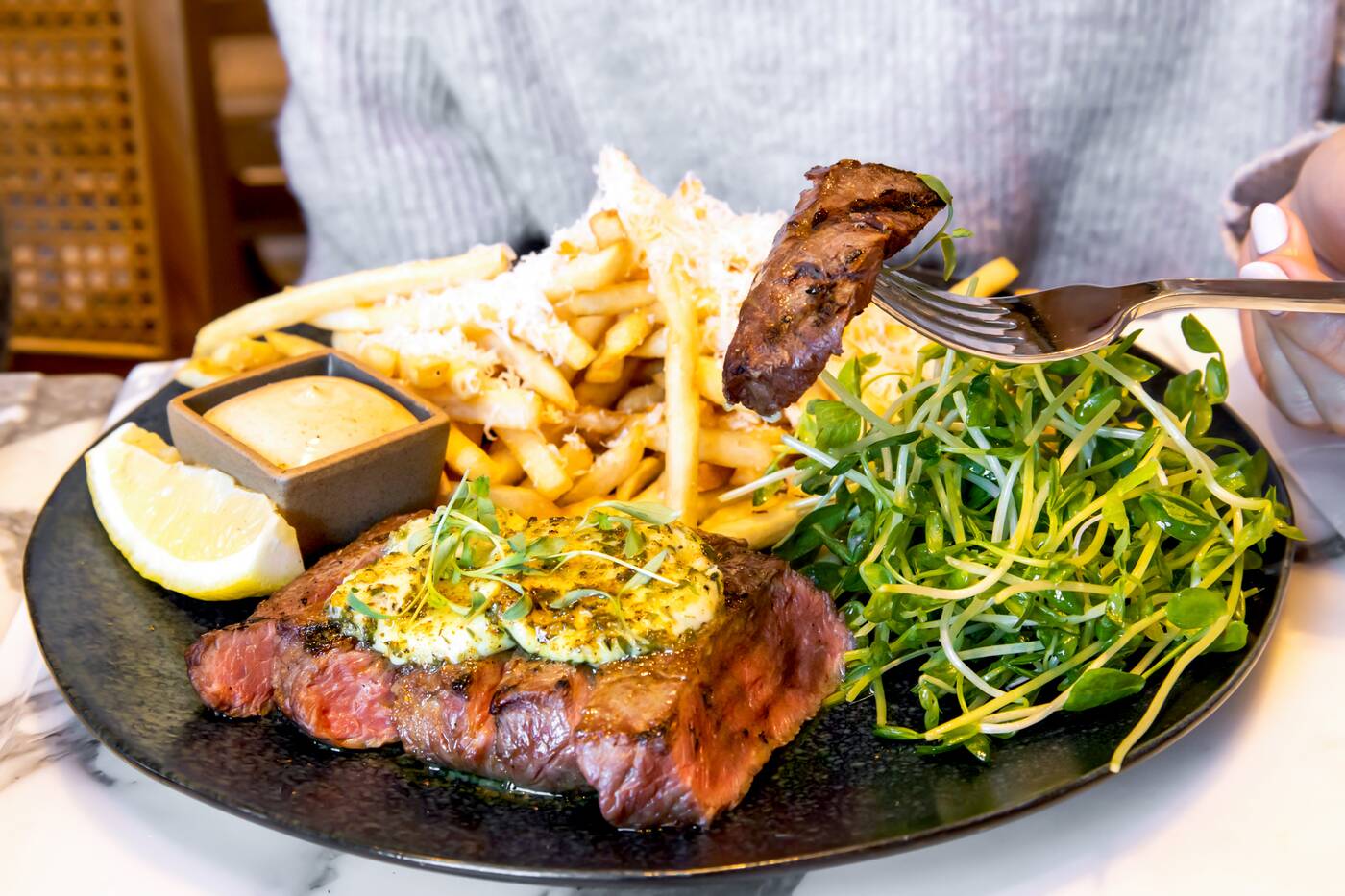 There's also an 8oz grilled flatiron steak ($28) that comes slathered in baharat butter made from spices like cardamom, paprika and coriander. A side of parmesan-covered fries goes on the side. 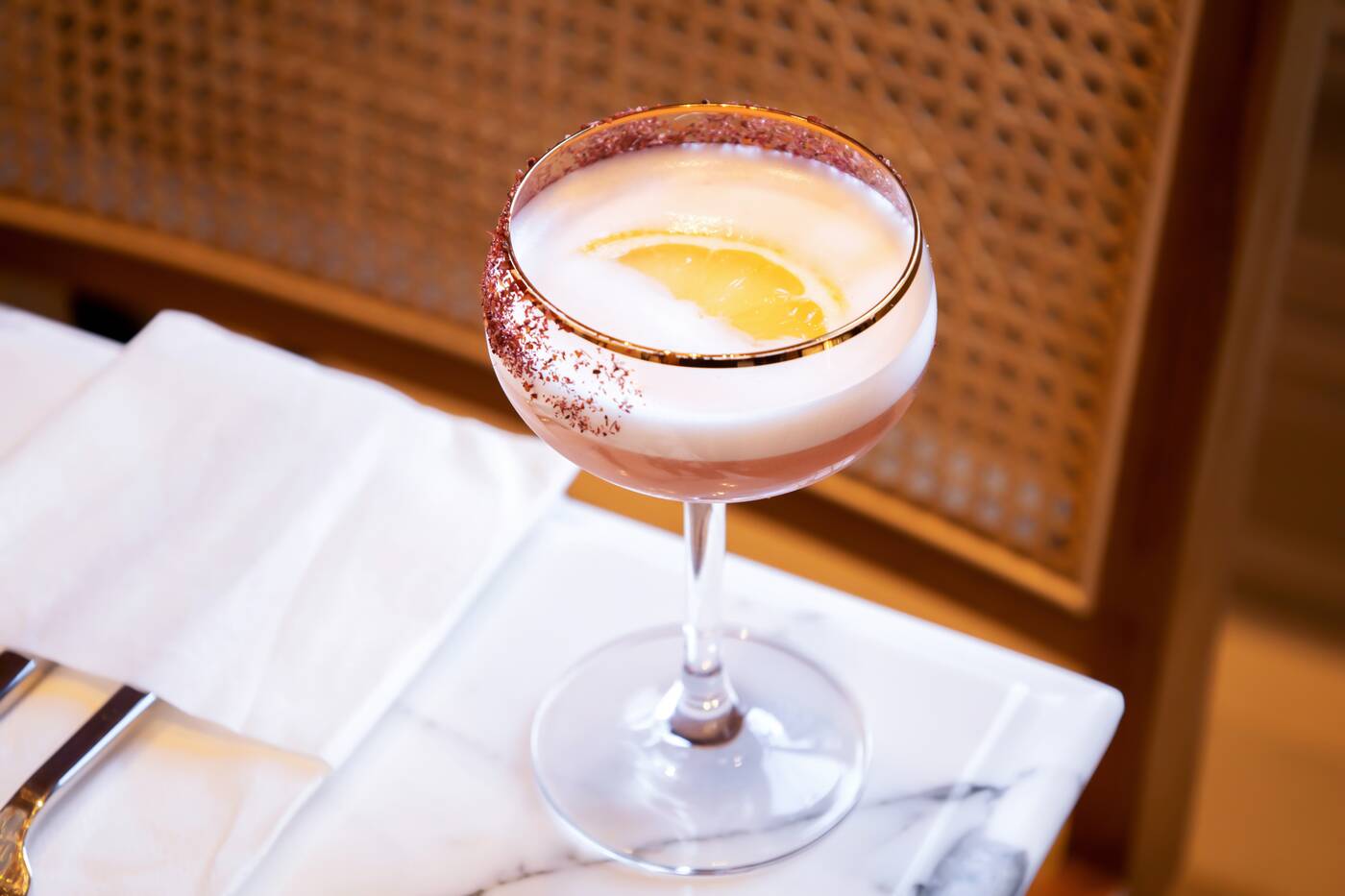 When it comes to the cocktails, each one has a name somehow connected to the history of the hotel like the Streetcar Queen ($17).

The gin-based drink with ginger liqueur and pomegranate grenadine has egg white, a sumac rim and a name that pays tribute to Miss Moco, a drag performer at Melody Bar famous for doing handstands on passing streetcars. She'll be back soon as the bar is finished renovations. 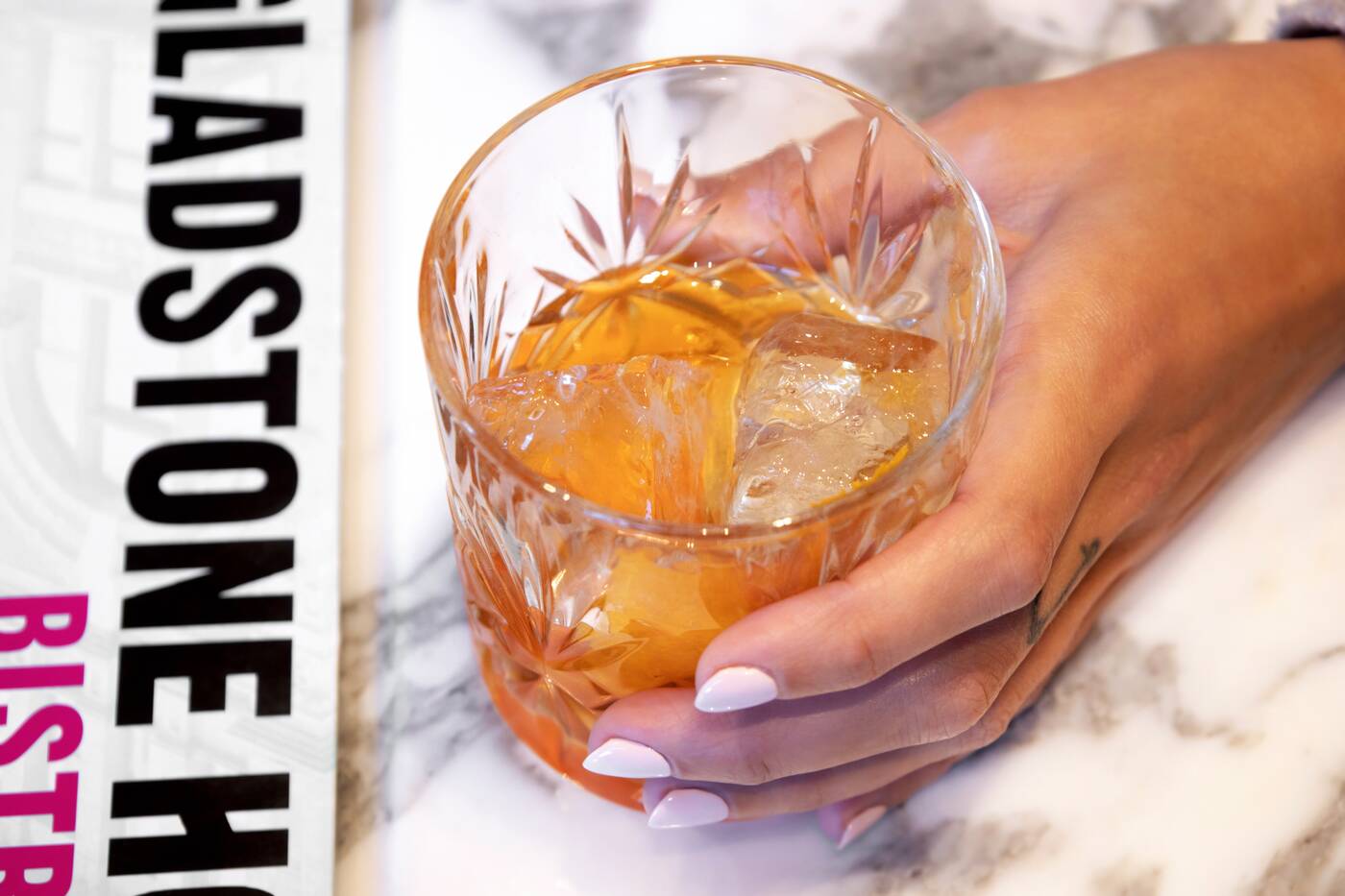 The Piano Plays at Night ($13) comes with a spooky ghost story about the room on the other side of the Melody Bar that has been said to be haunted. There have been reports of a piano playing at night from the room that used to be a gentleman's club a long time ago. 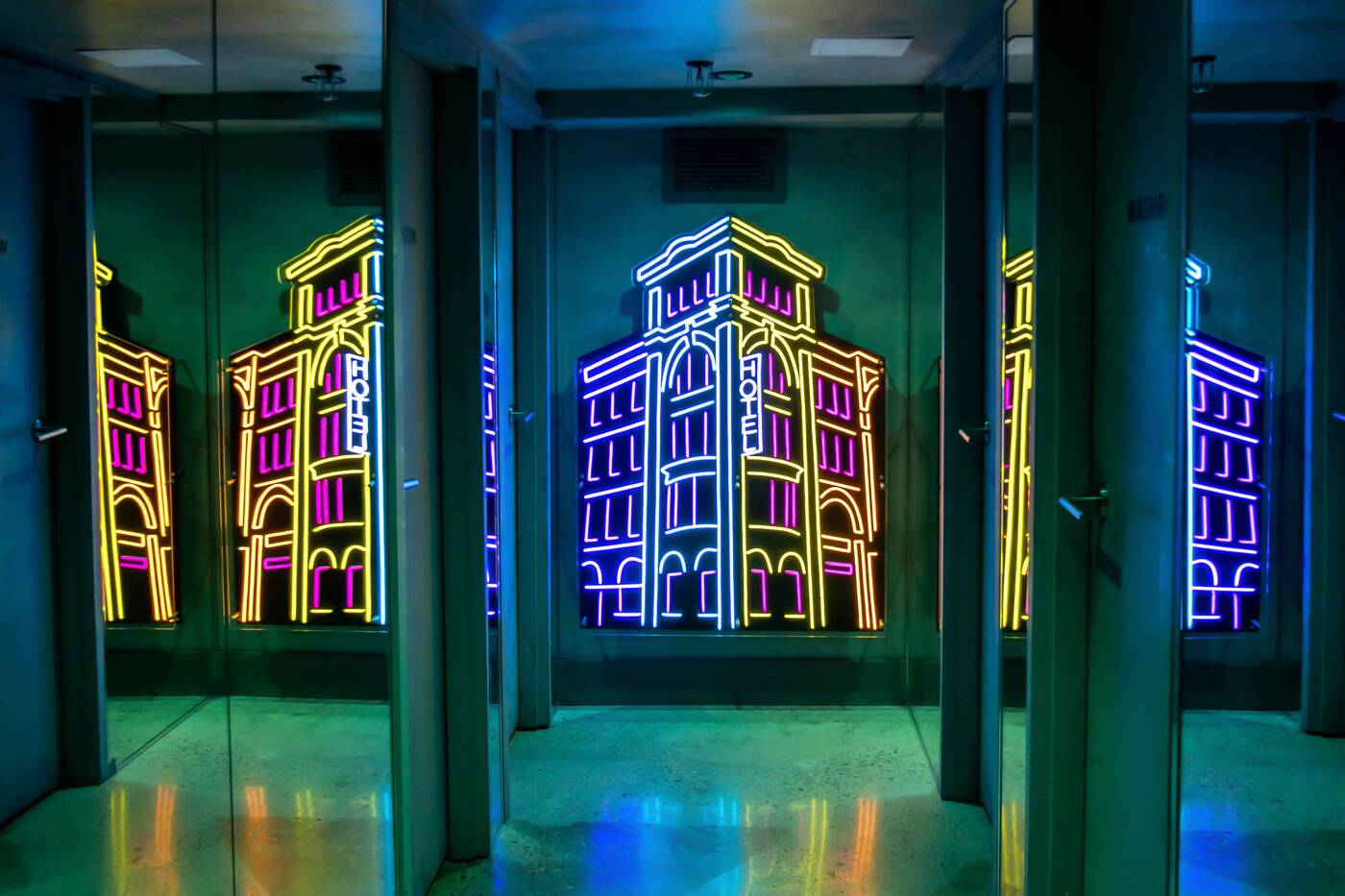 The basement, which used to be behind a locked door as a staff space is now also open to guests. That's where you'll find the LED neon replica of the hotel by Kal Honey. 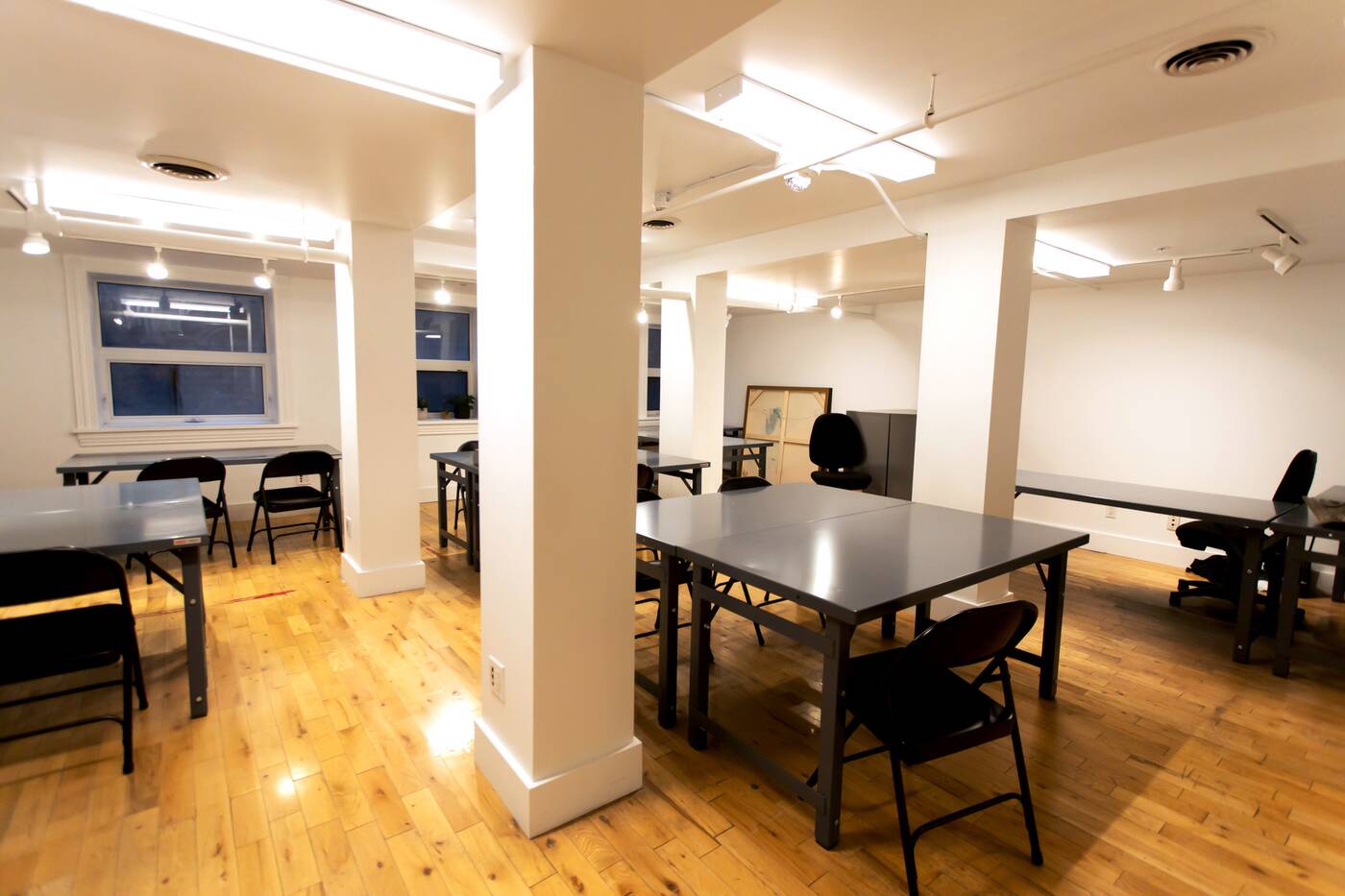 A separate room downstairs is an art studio that artists can book for two or three months at a time for no cost. 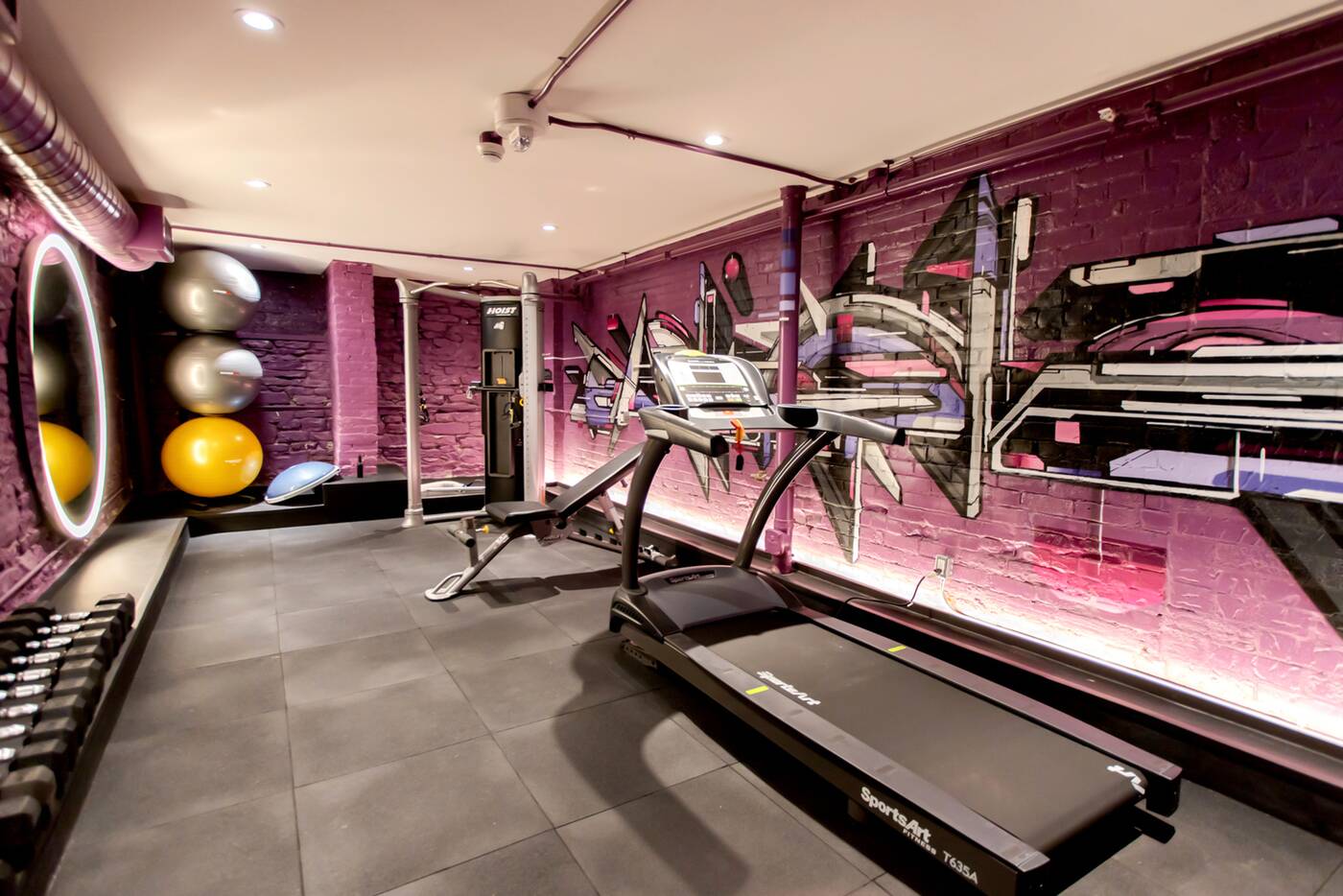 There are also three fitness rooms, all of which are brand new to the hotel. Each one has a signature colour and wall mural by a different artist, so you can continue taking in art on the treadmill. 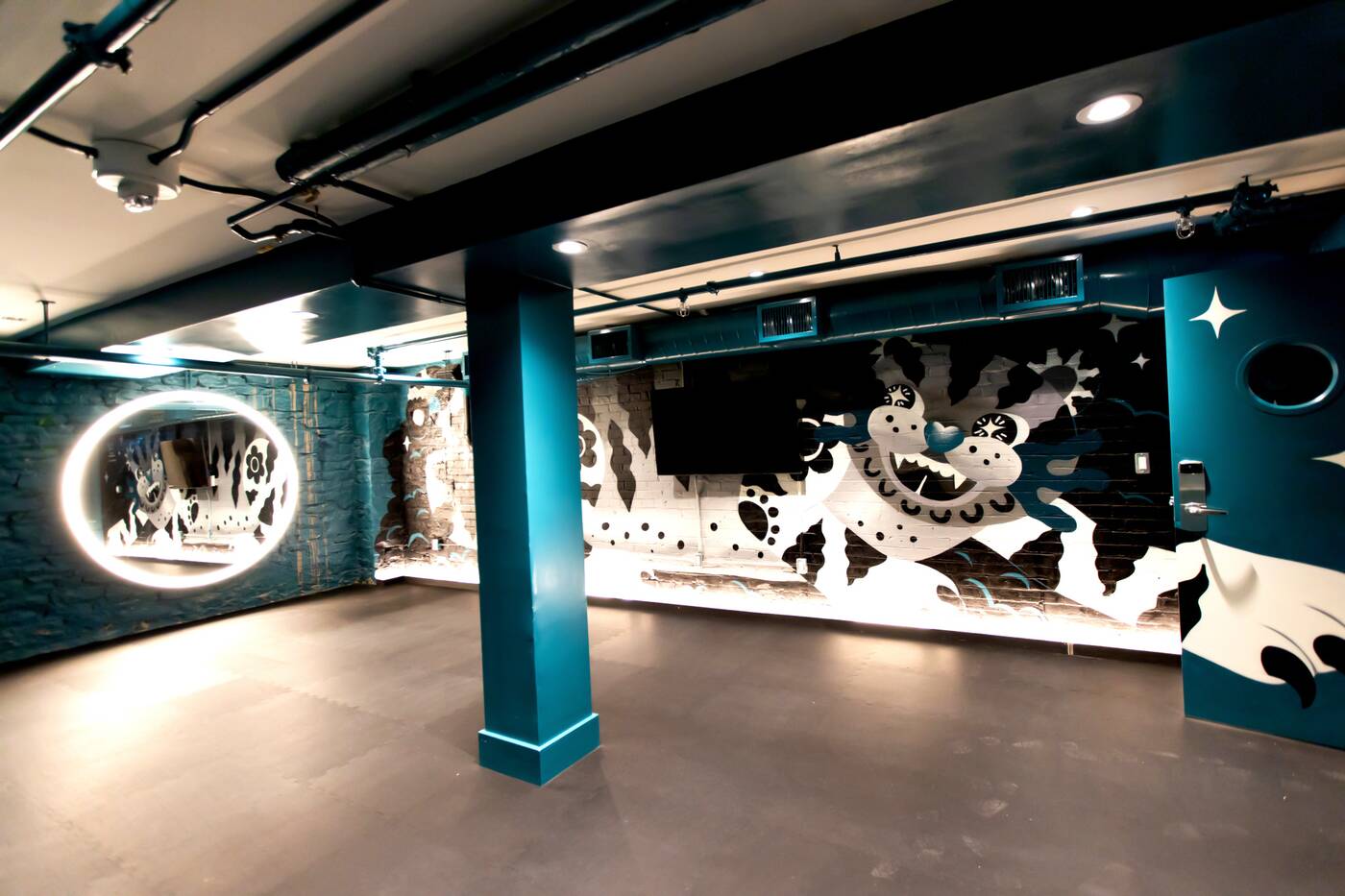 Jieun Kim completed the white tiger (symbolic of courage and power in Korean culture) in a matter of three days. 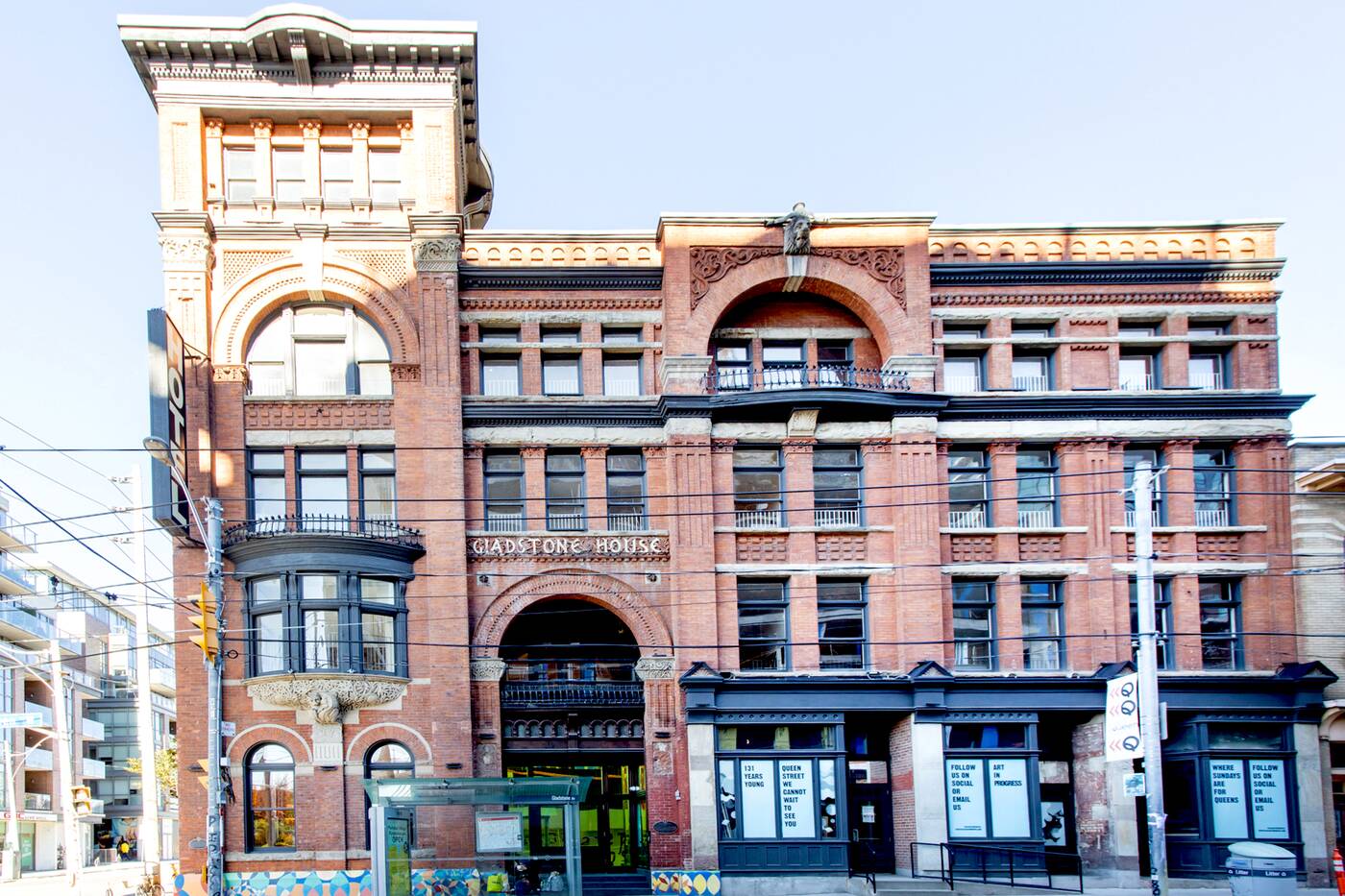