Drake Hotel is currently open but their offerings and services may be affected due to the pandemic. Please contact the business directly for more information about any changes. Is this your business? Please contact us if you would like to update this message.

The Drake Hotel is a rock and roll boutique hotel that's expanded since resurrecting 17 years ago as a Toronto landmark with art and culture as its pulse in the heart of the city.

The storied spot for live music and stylish overnight stays now has a brand new five-level wing with 32 additional guest rooms, a spanking new lobby, and a lobby bar looking out at Queen West. 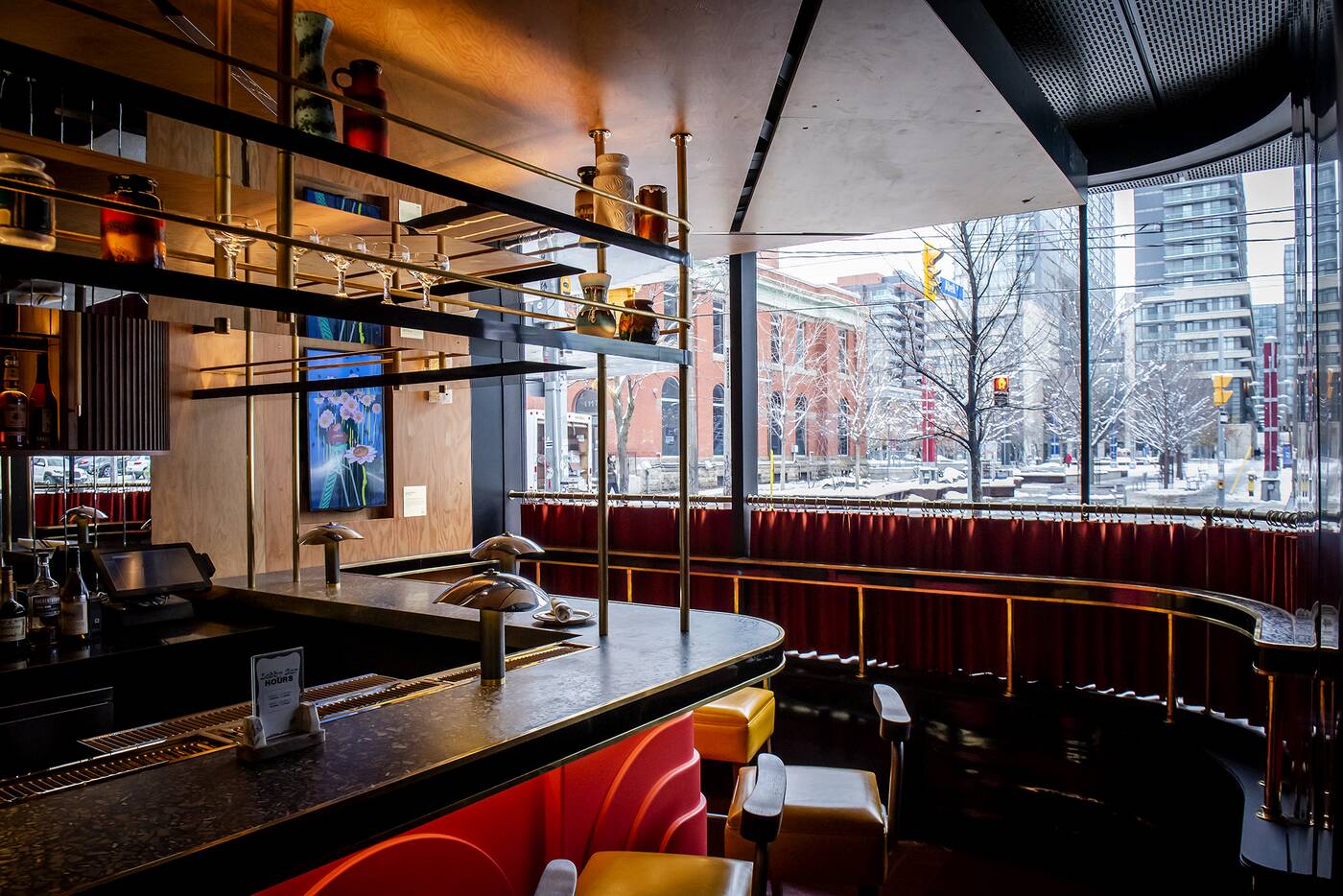 Revolving doors just east of the original entrance bring you into the new front lobby where guests will now go to check-in for their stay. 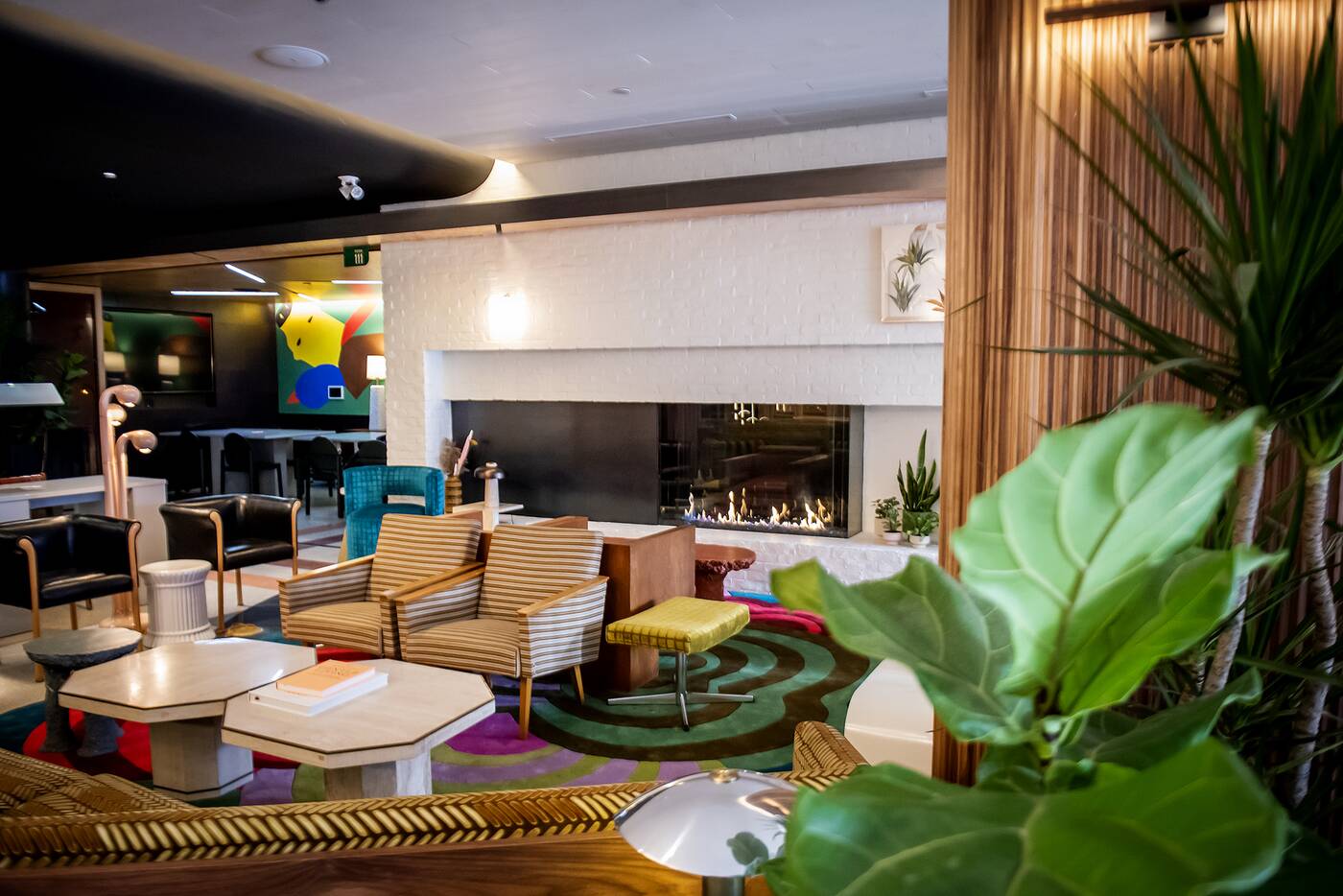 It's still very much Drake with terrazzo floors and plenty of wood, textures and bold colours playing off each other in the lobby and rest of the wing, created by the in-house team in collaboration with Diamond Schmitt Architects, DesignAgency, John Tong and Michael Awad. 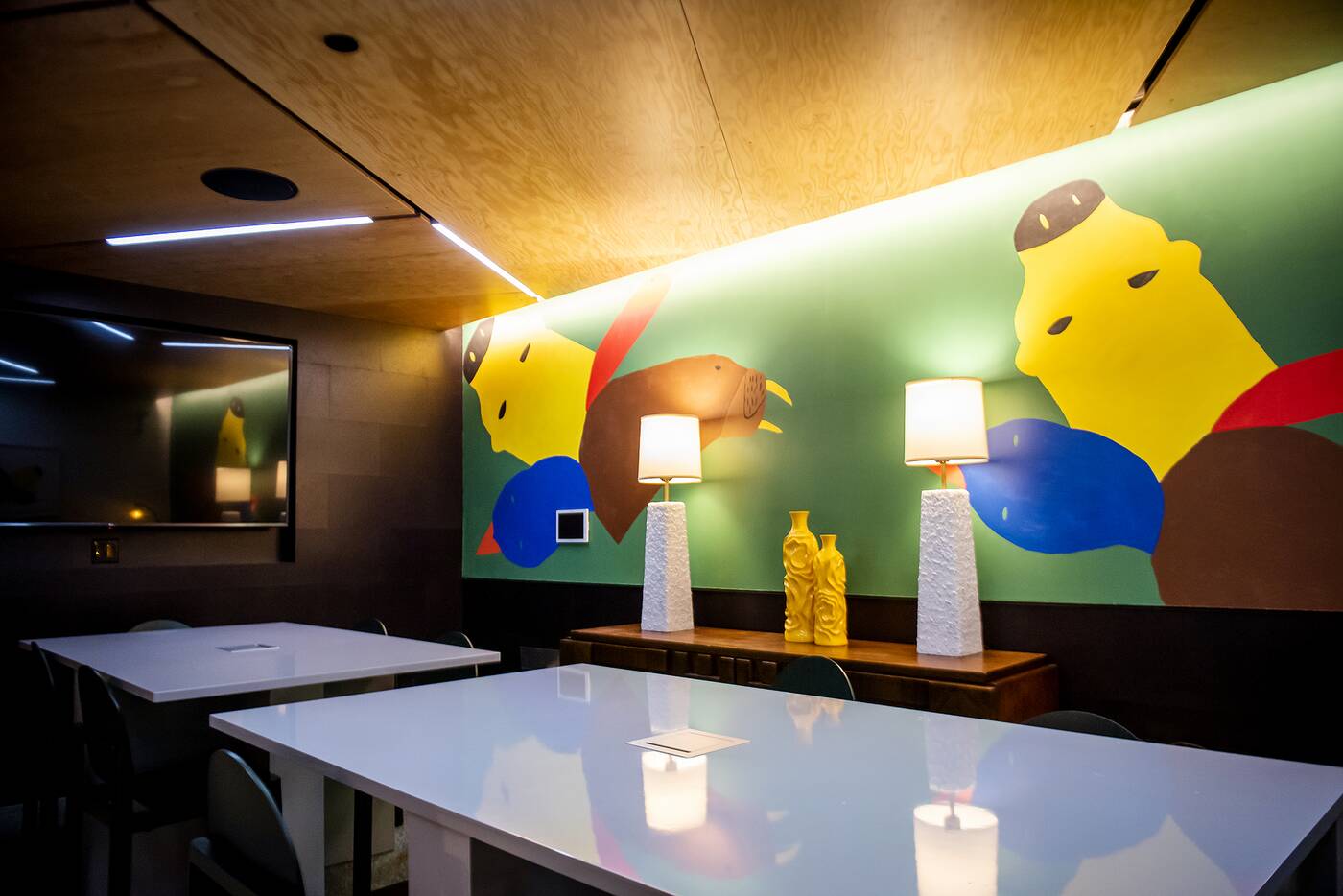 The mural in a meeting room off the lobby by Toronto Inuit artists Angela Aula and Oscar Flores is based on a pencil crayon drawing by artist Saimiayu Akesuk and is one of the first pieces you'll see of the new art collection around the hotel. 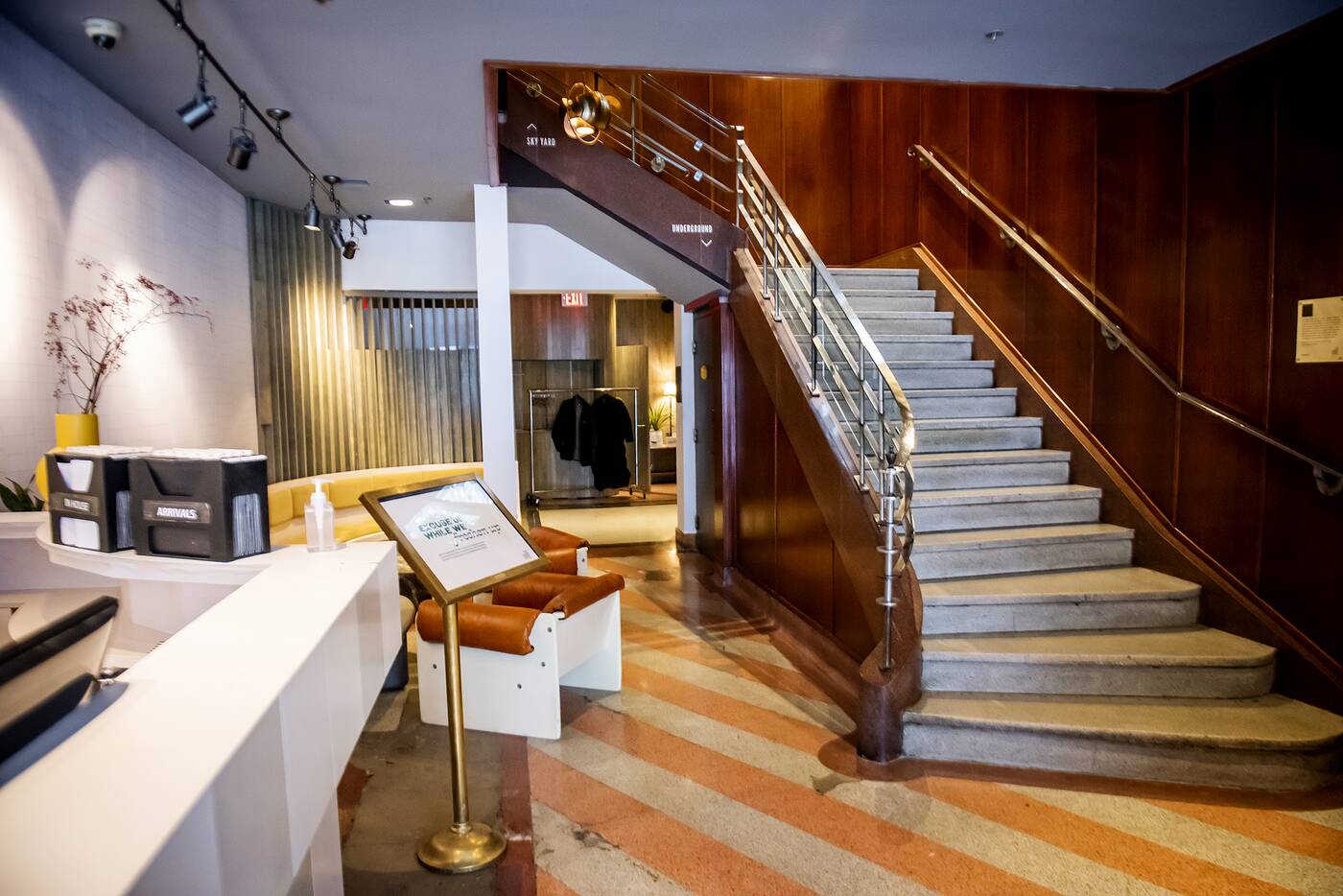 The original hotel lobby (which can be accessed from the new lobby by passing through the restaurant) has also gotten a facelift, though it still retains historic elements like the grand staircase. 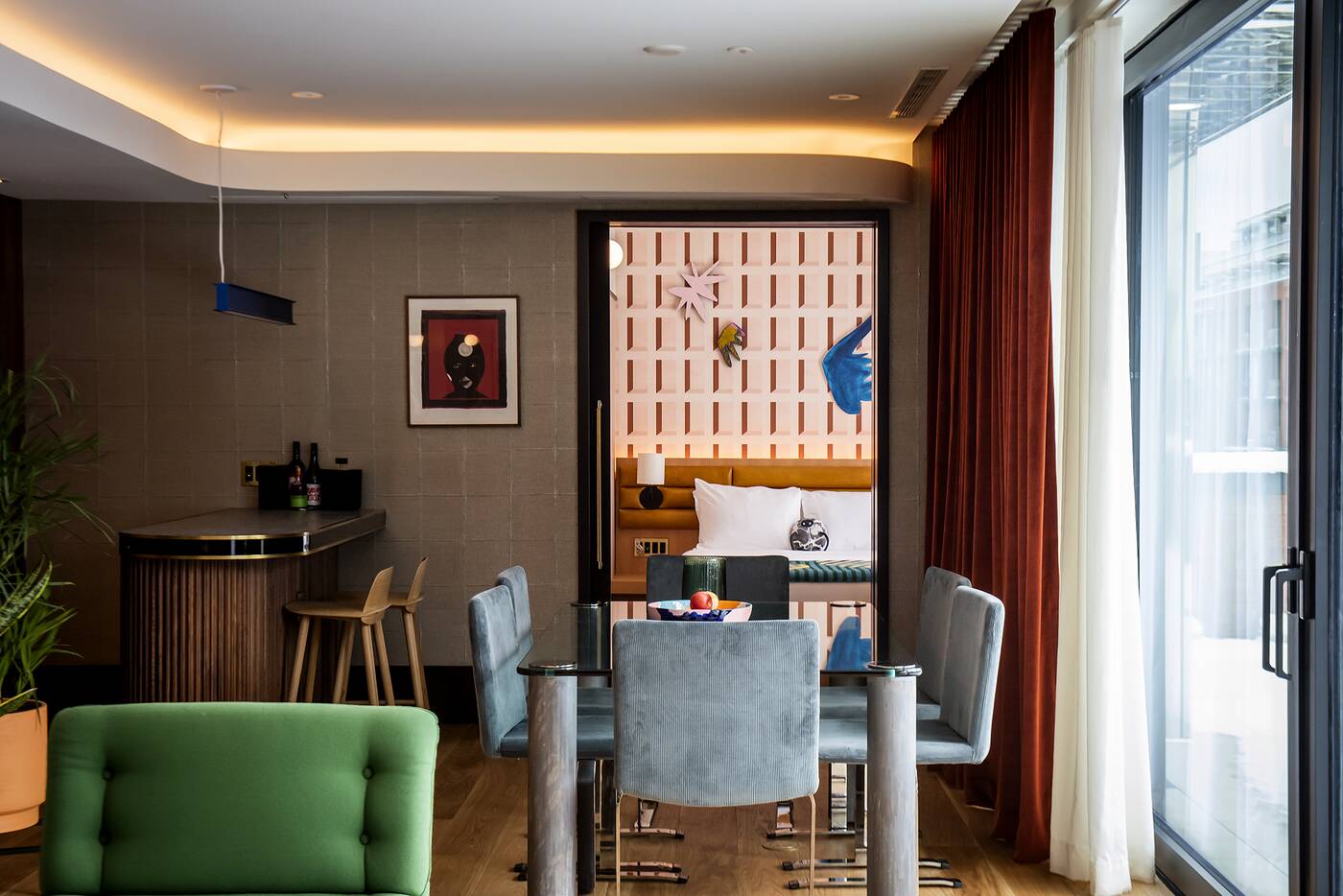 An 800-square-foot apartment formerly used by touring musicians has been turned into what they're calling the Artist Loft while the rooftop suite on the top floor can be booked for $2,000 a night. 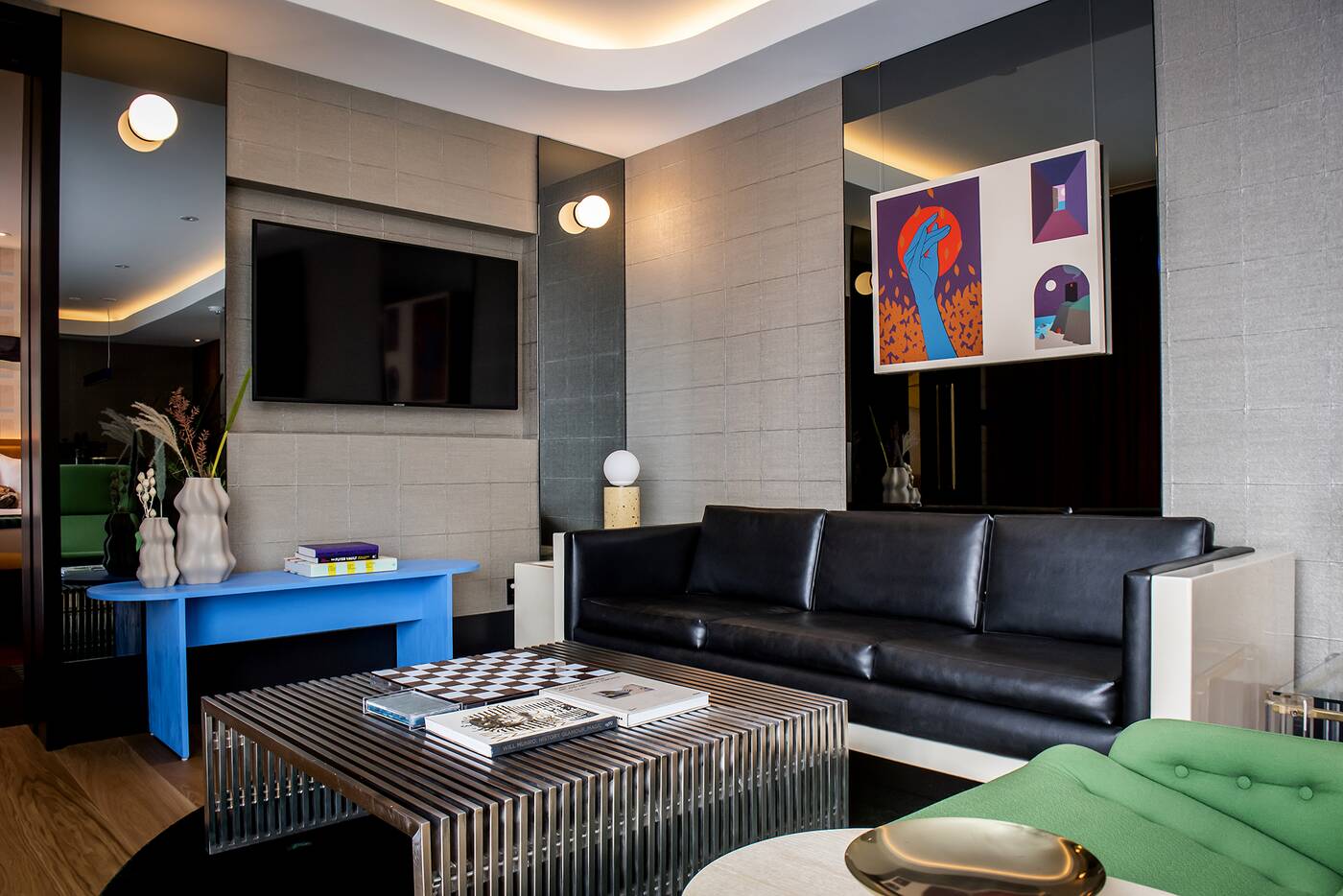 This grandiose room feels like your very own apartment with a full kitchenette, eight-seat dining table and Memphis-styled living area looking out to a private 540-square-foot terrace. 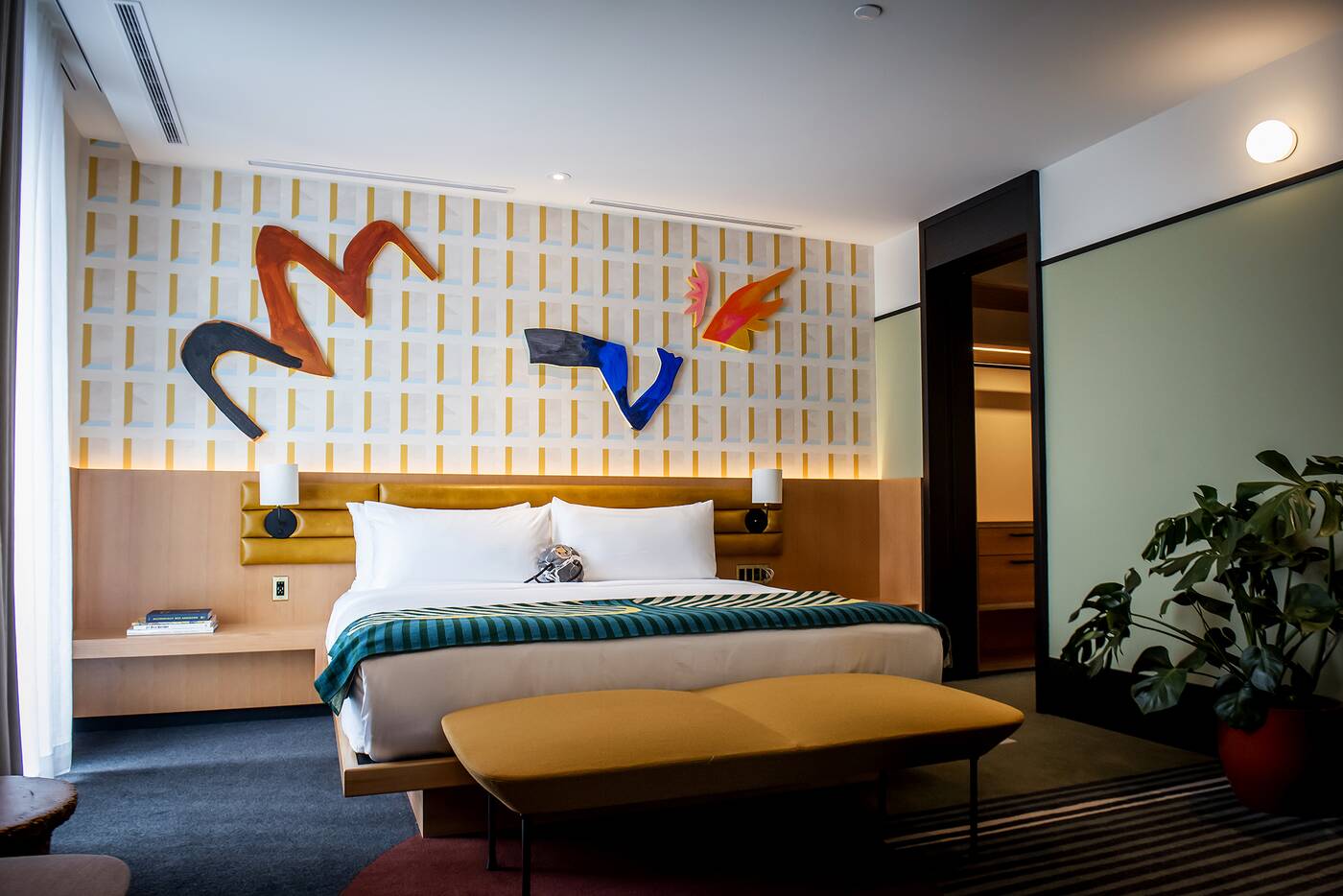 The suite features two bedrooms that incorporate colours of mustard and teal, as well as wallpapers and art pieces unique to each floor. 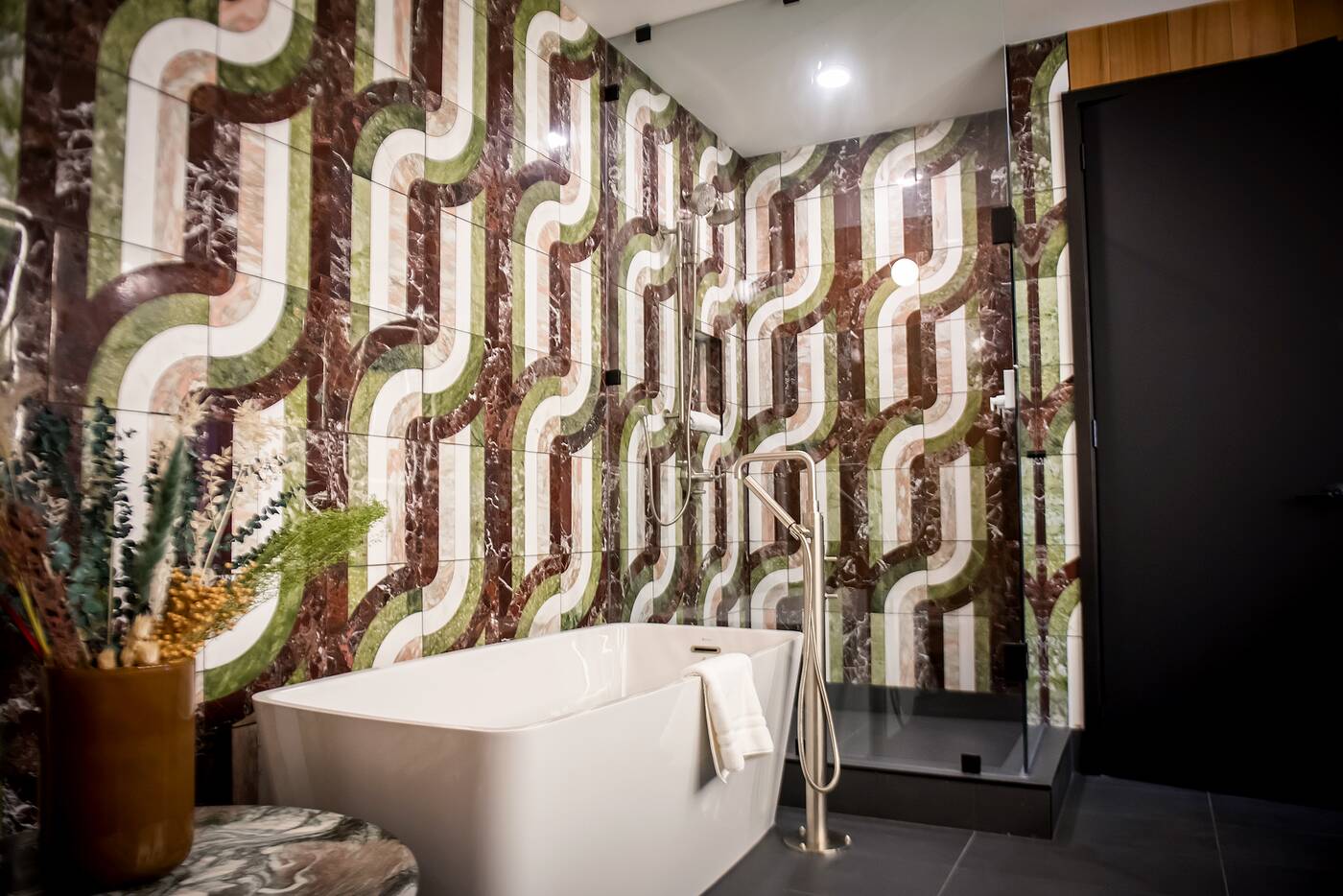 The private bathroom adjoining the master bedroom comes with a walk-in shower, double vanity and soaker tub all surrounded by an art-deco, arch rainbow tiling on the walls. 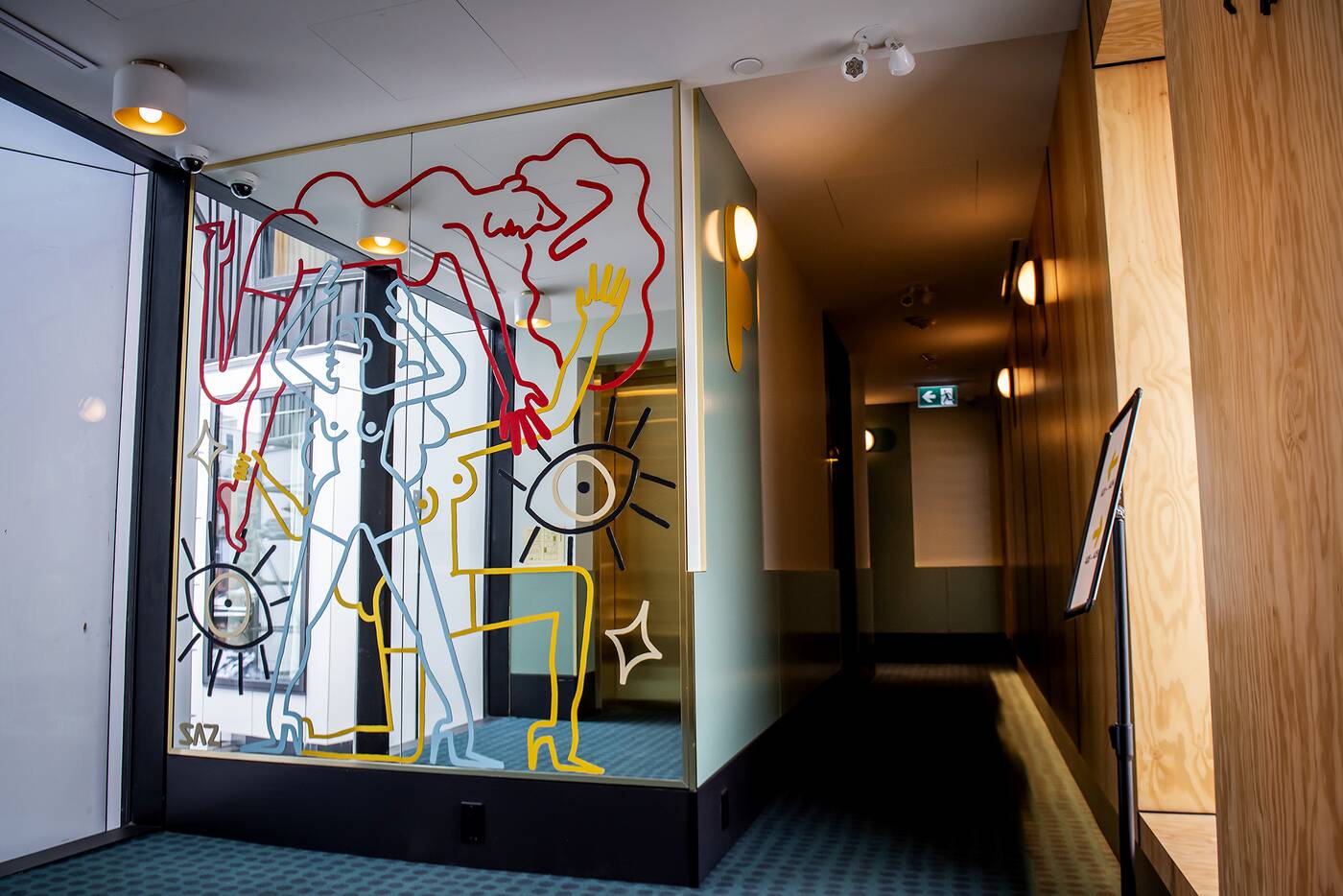 Acrylic mirror paintings by Toronto artist Sarah Alinia Ziazi, which focus on female empowerment, can be found at the elevator landing on every floor. 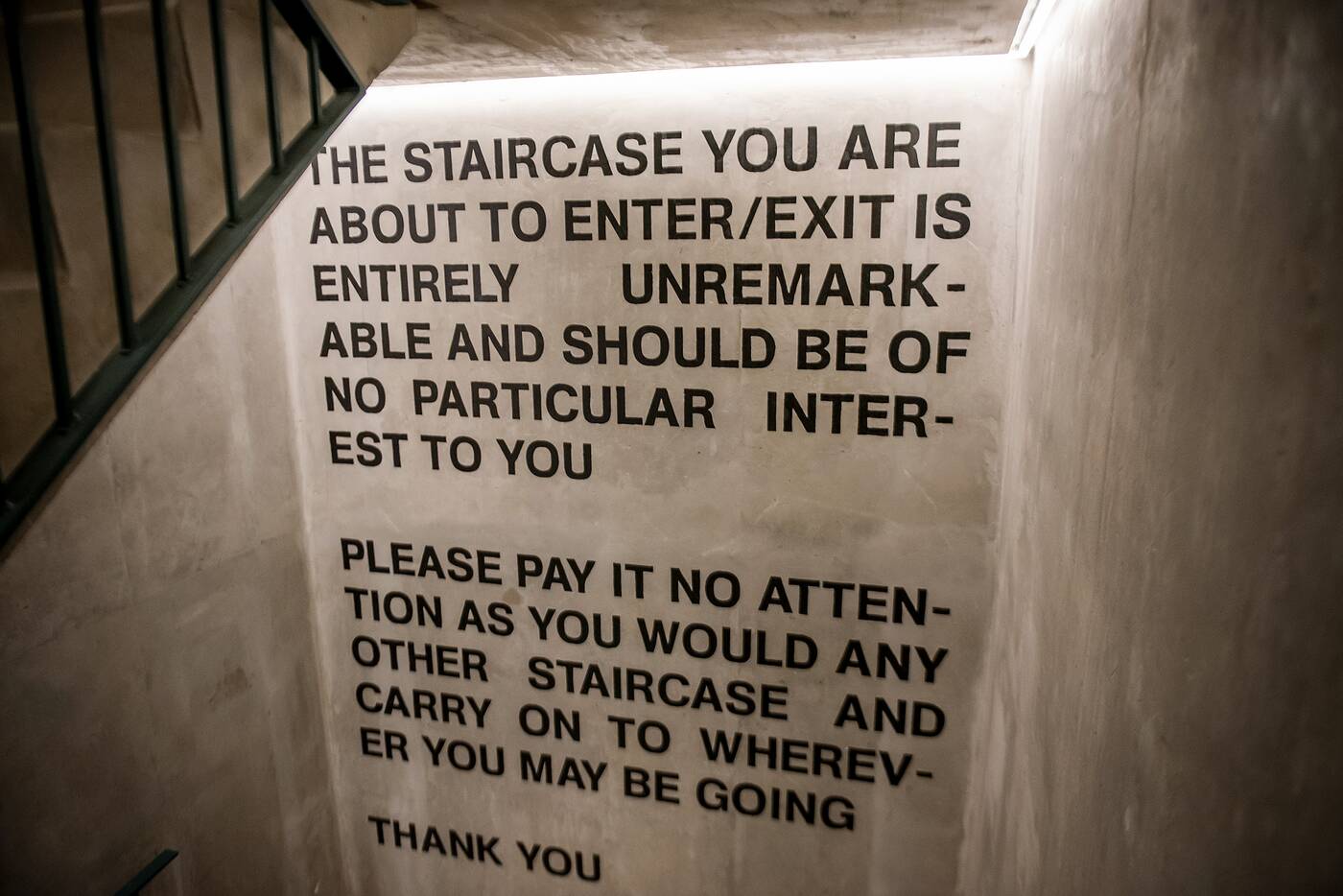 But guests are encouraged to also take the stairs with a light-hearted piece of text by Toronto artist Owen Marshall dubbed the "Unremarkable Staircase" to make the extra steps worthwhile. 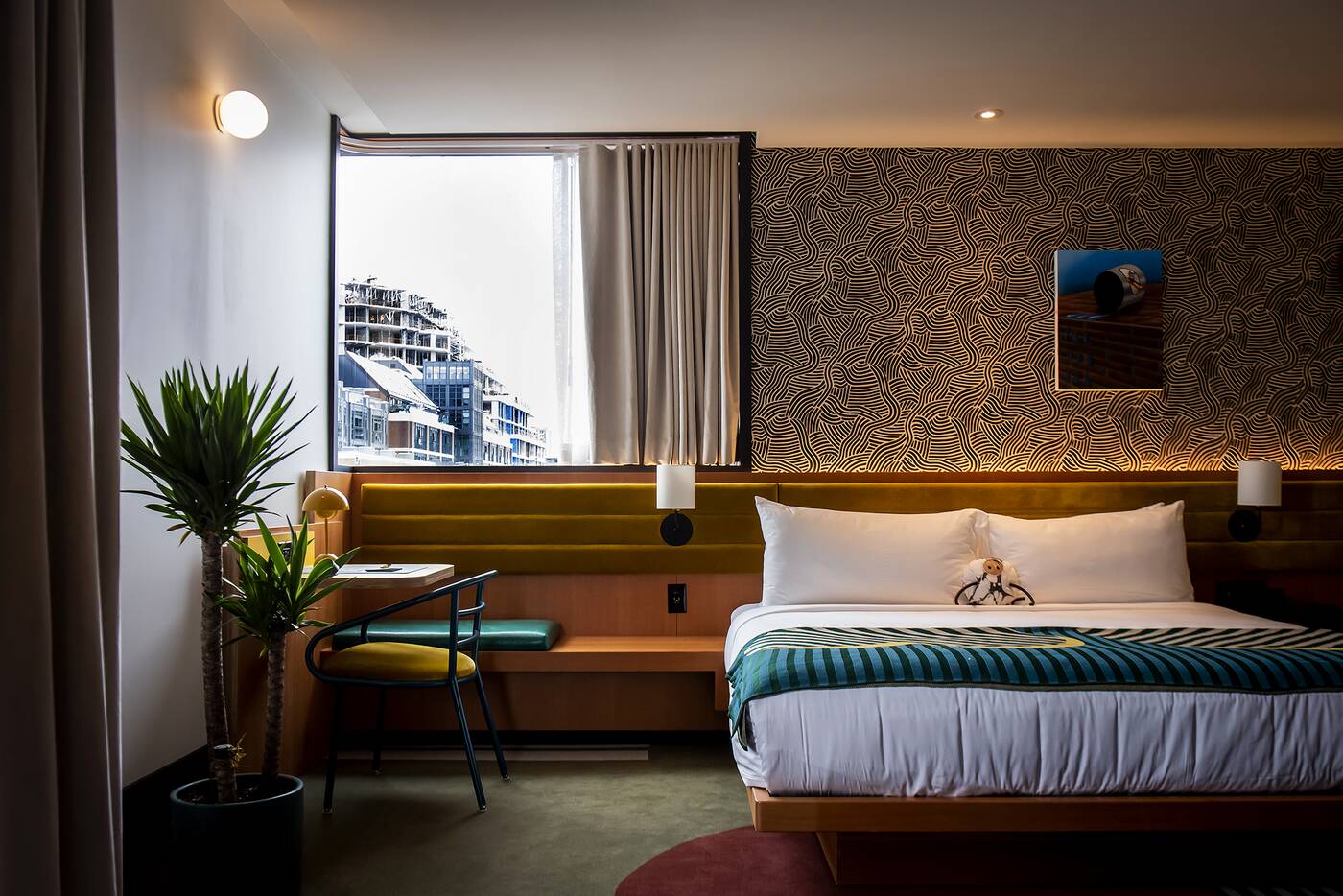 The rest of the guest rooms in the modern wing come with a fully stocked mini bar and snack cubby. Nightly rates range from $350 to $500 depending on the day of the week you're staying and whether it's a double, queen or king room. 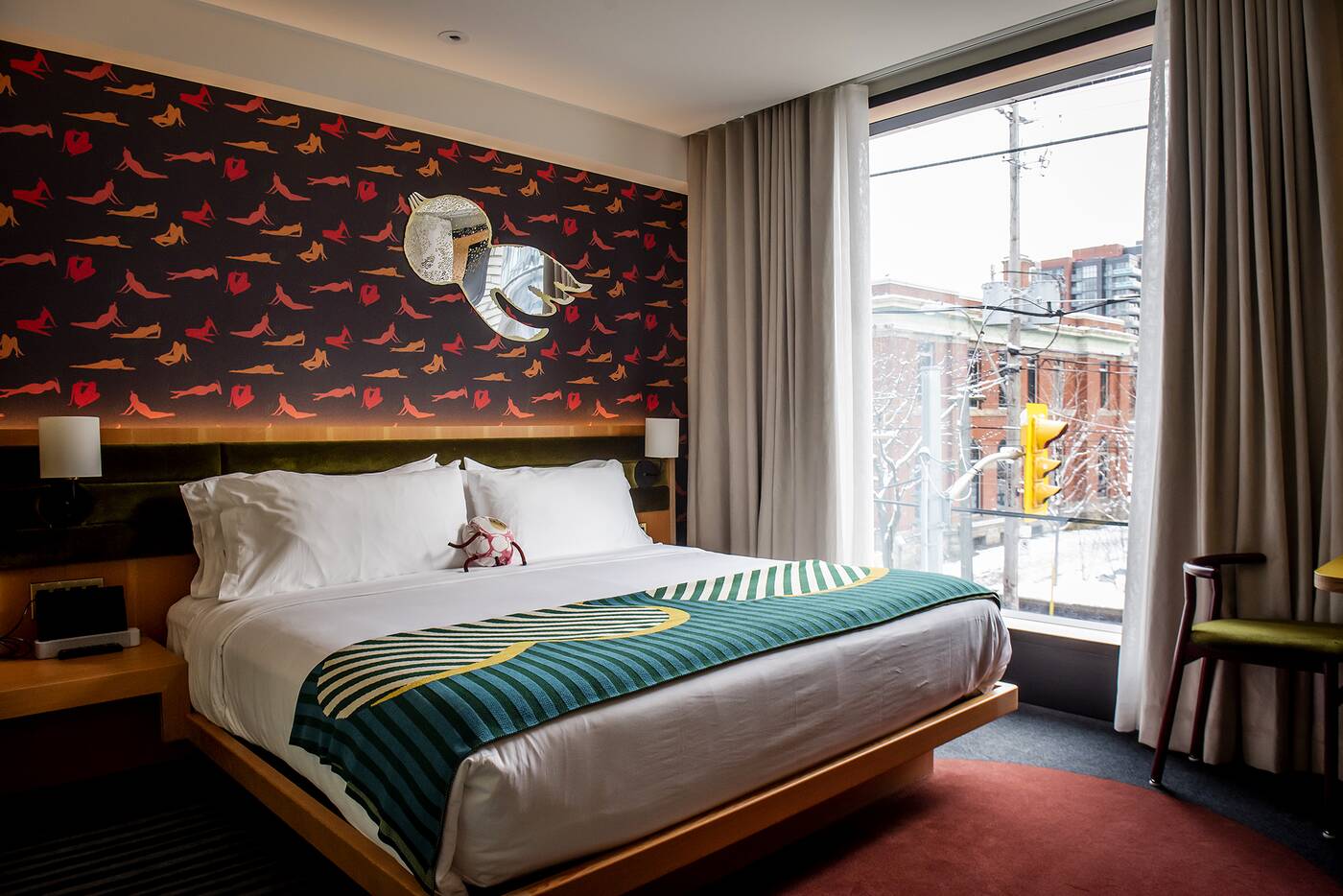 Accessible king and queen rooms are a first for the Drake. The accessible queen room on the second floor is level with a Queen West traffic light and features reflective pieces from Japanese-Canadian artist Toko Hosoya. 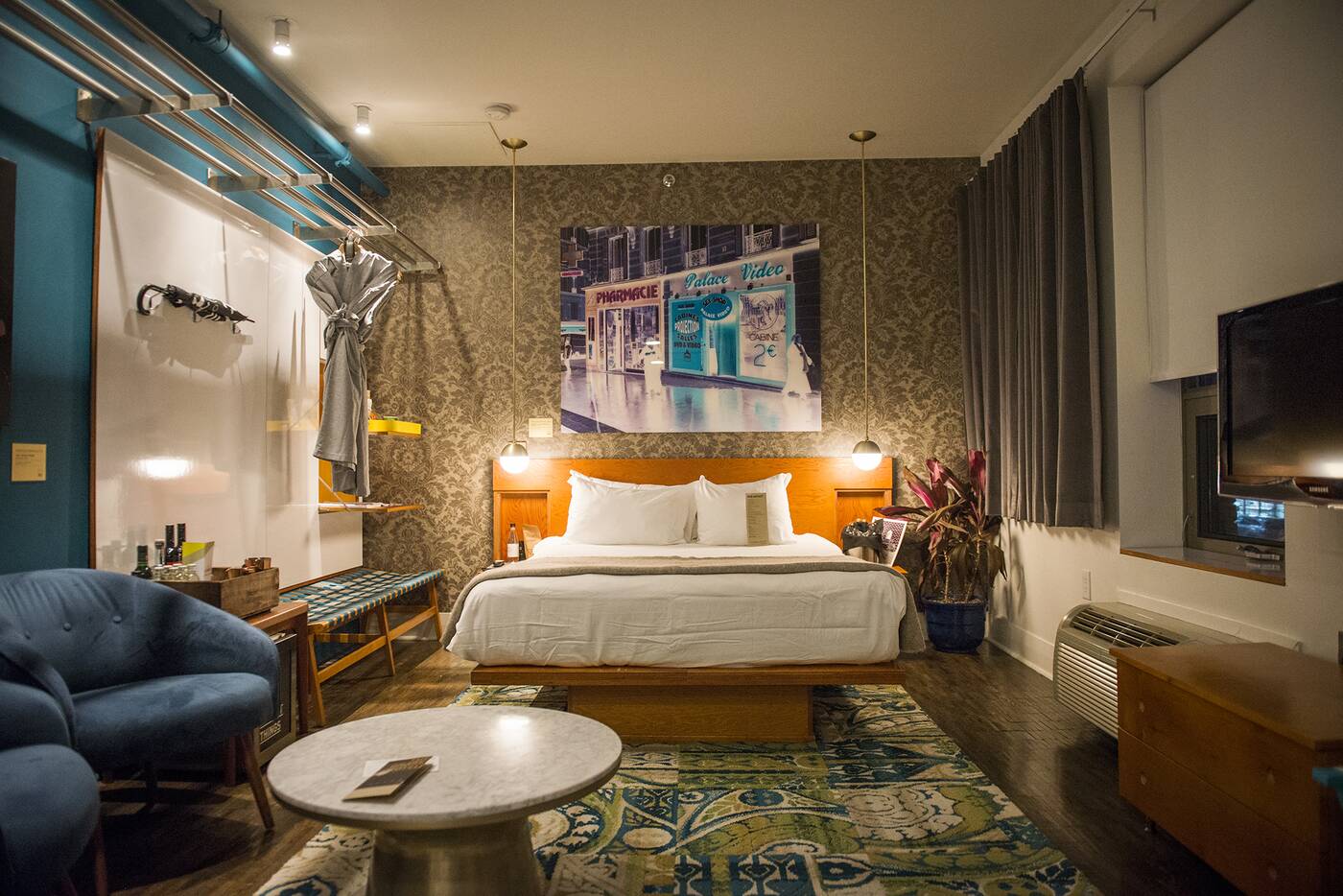 The 19 guest rooms in the classic wing remain the same, also coming with their own original artwork. Nightly rates start around $259. 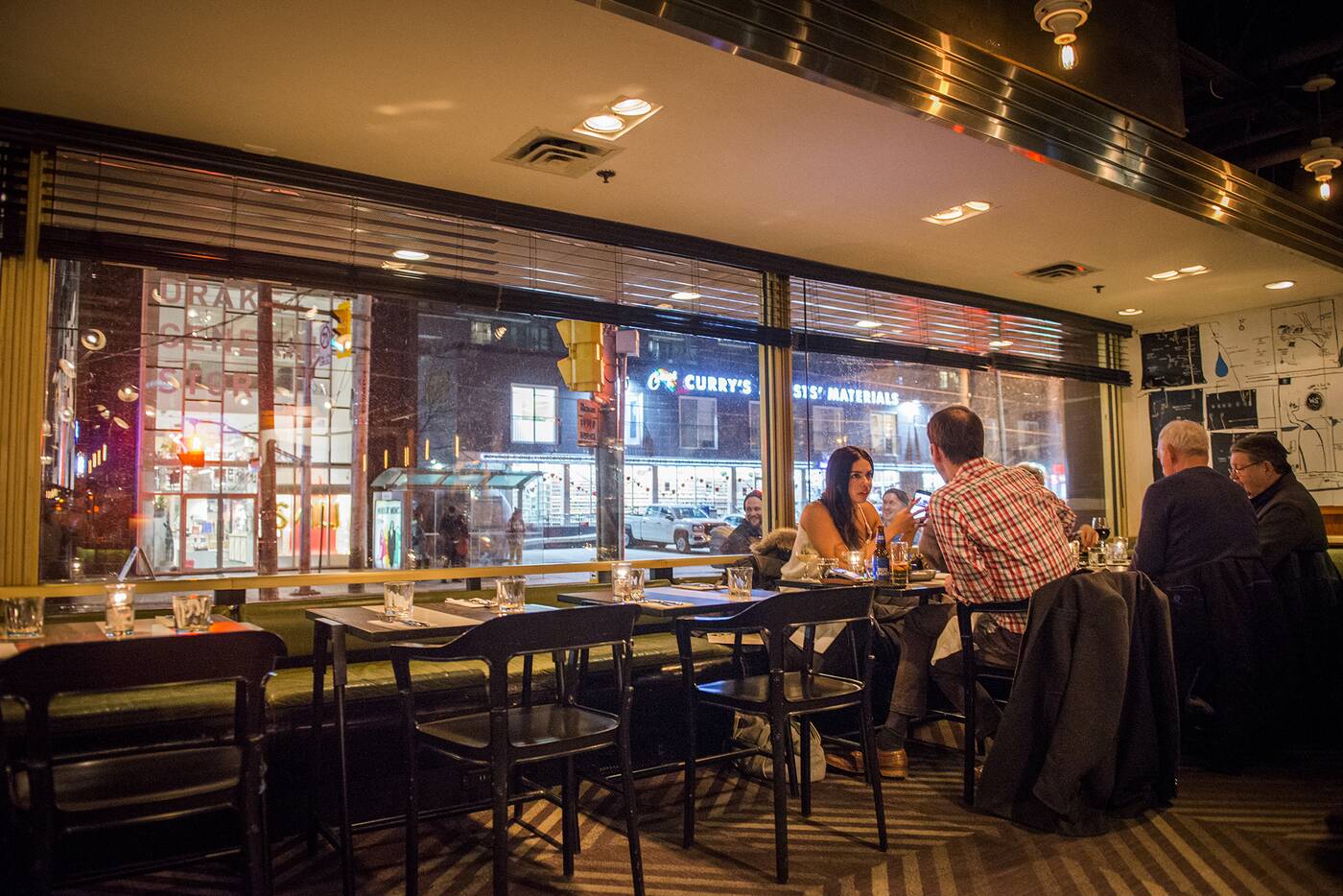 The hotel is complemented by a ground-floor restaurant lounge and bar area, known as "Stardust" in the 90s. Find a selection of seasonal dishes on the menu alongside staples like the signature Drake burger. 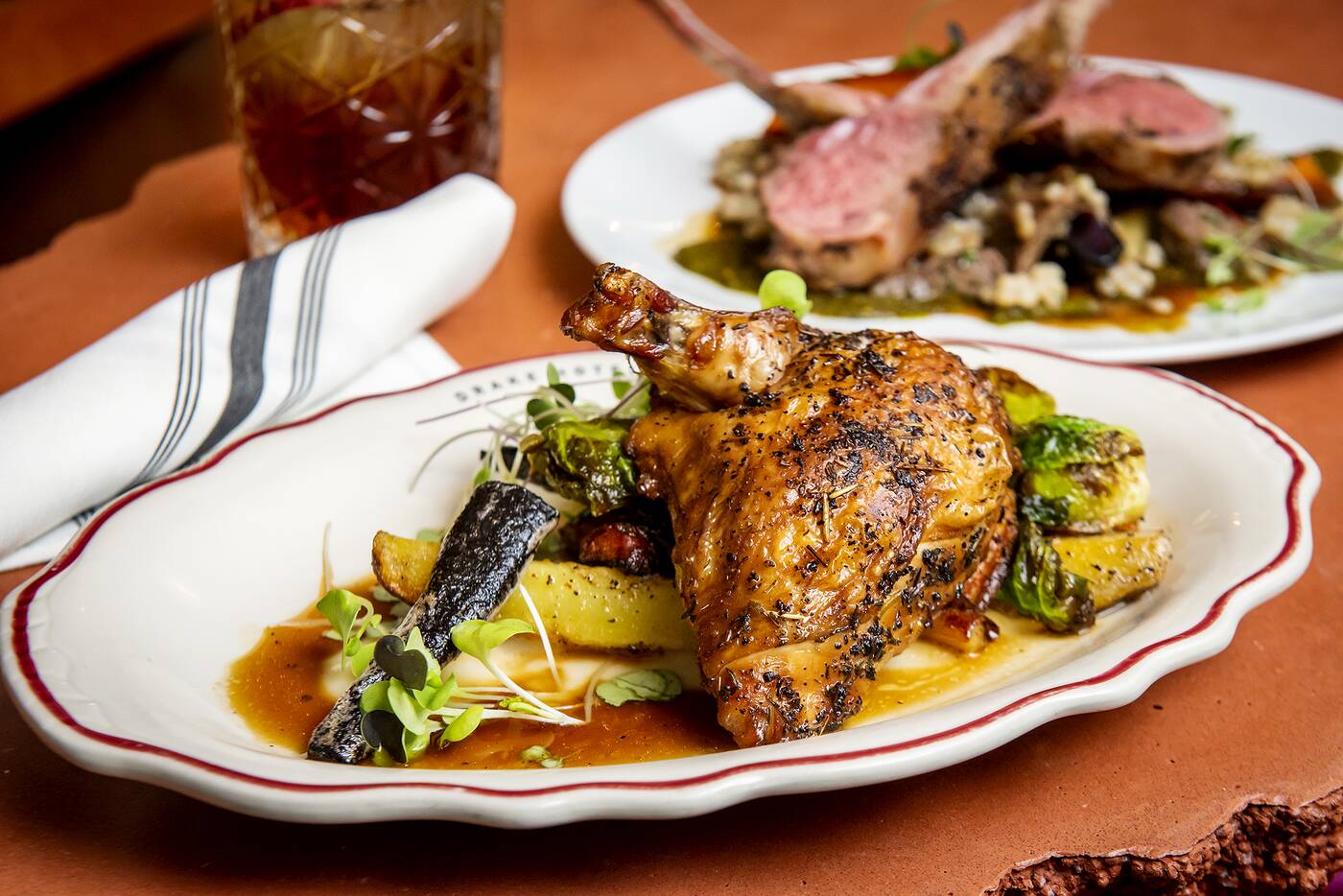 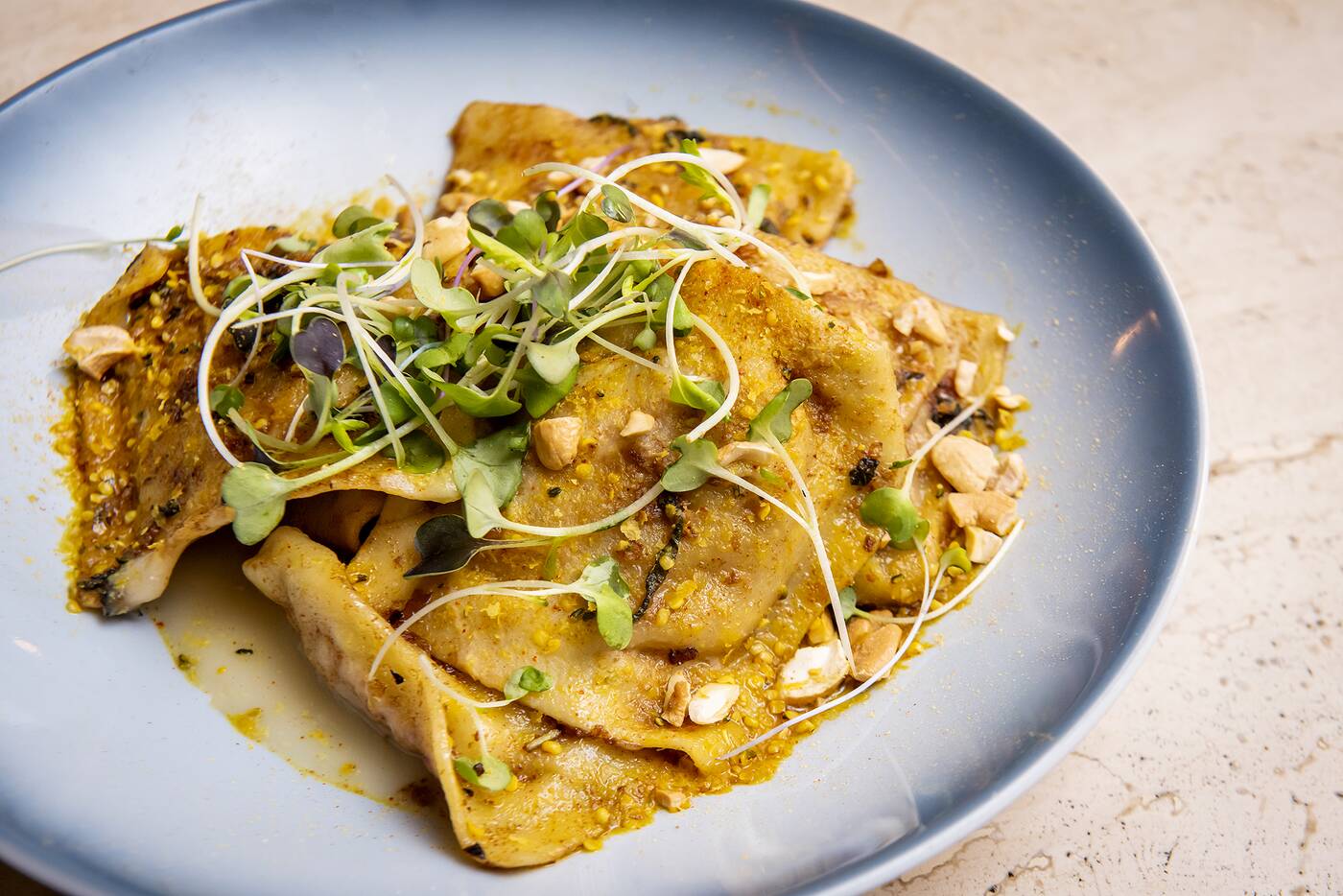 Pumpkin ravioli ($24) is a standout, done with fermented cashew brown butter and parsnip purrée. Sage and hemp-seed parmesan are sprinkled over top. 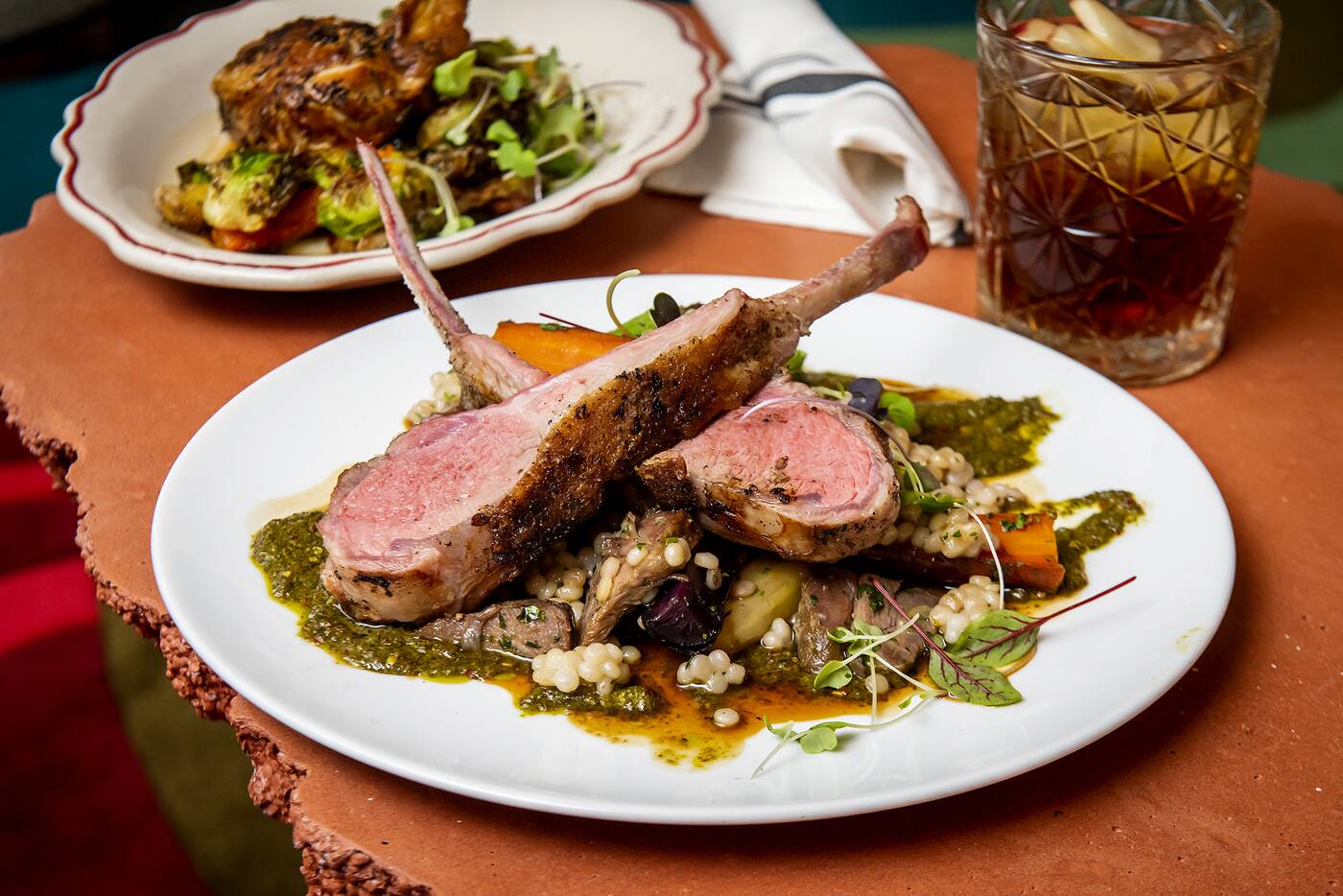 Sous-vide lamb rack ($42) from Ontario is another seasonal dish by Exec Chef Laura Maxwell. The pinky braised shoulder is served with couscous and carrots in a chimichurri sauce. 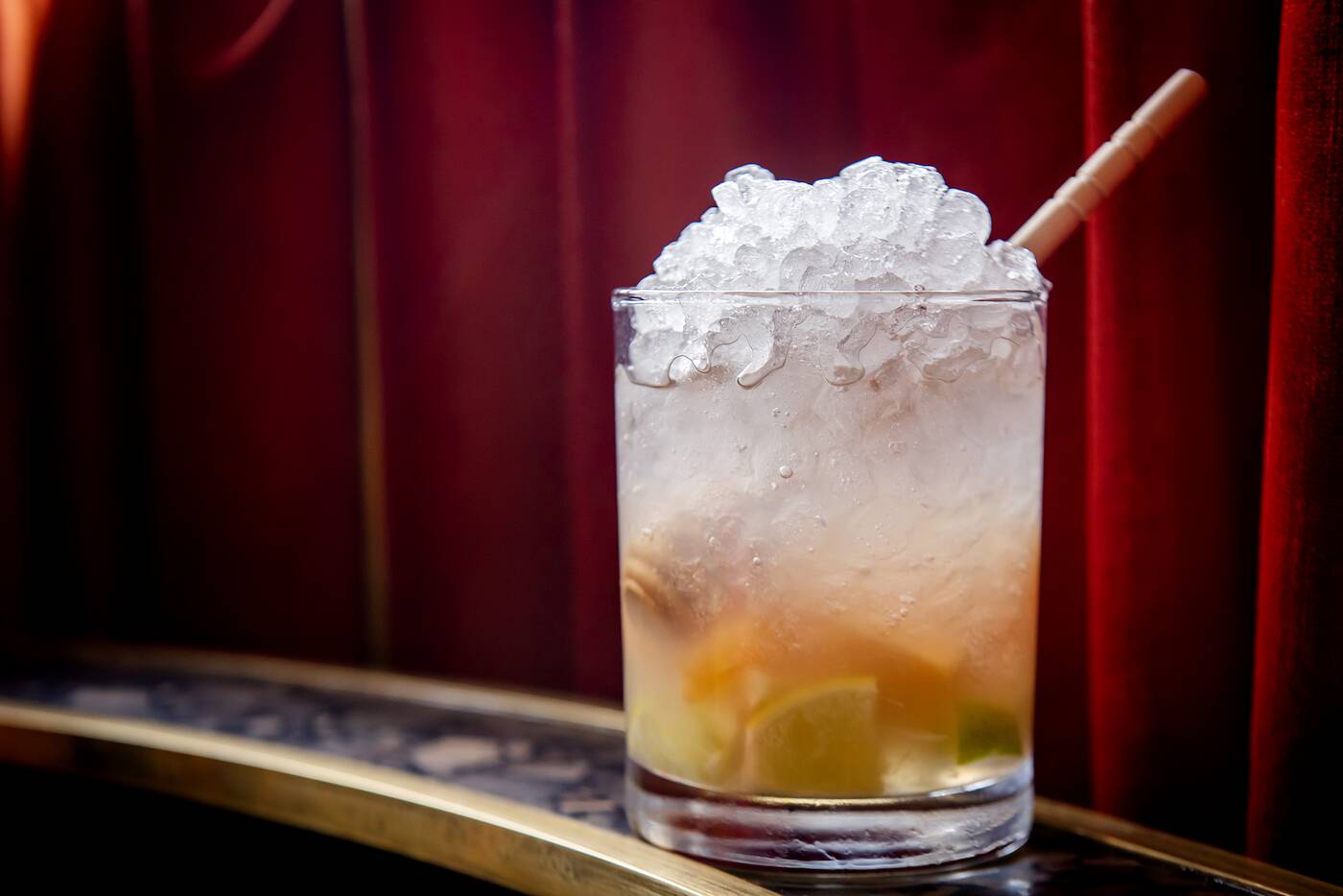 Drake Underground and Sky Yard keep the party going out of the classic wing while the new lobby bar is more of a quiet reprieve from the city hustle. 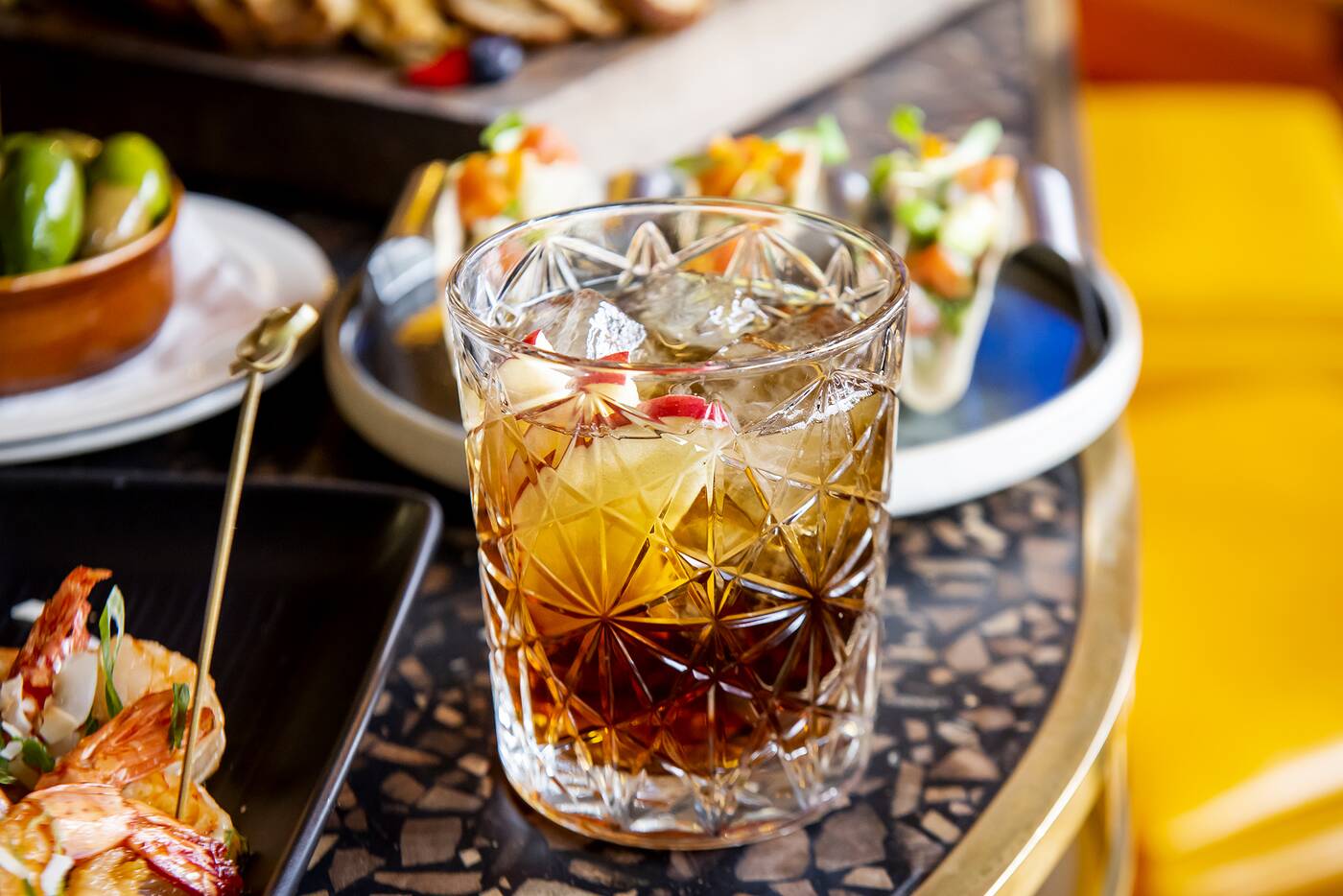 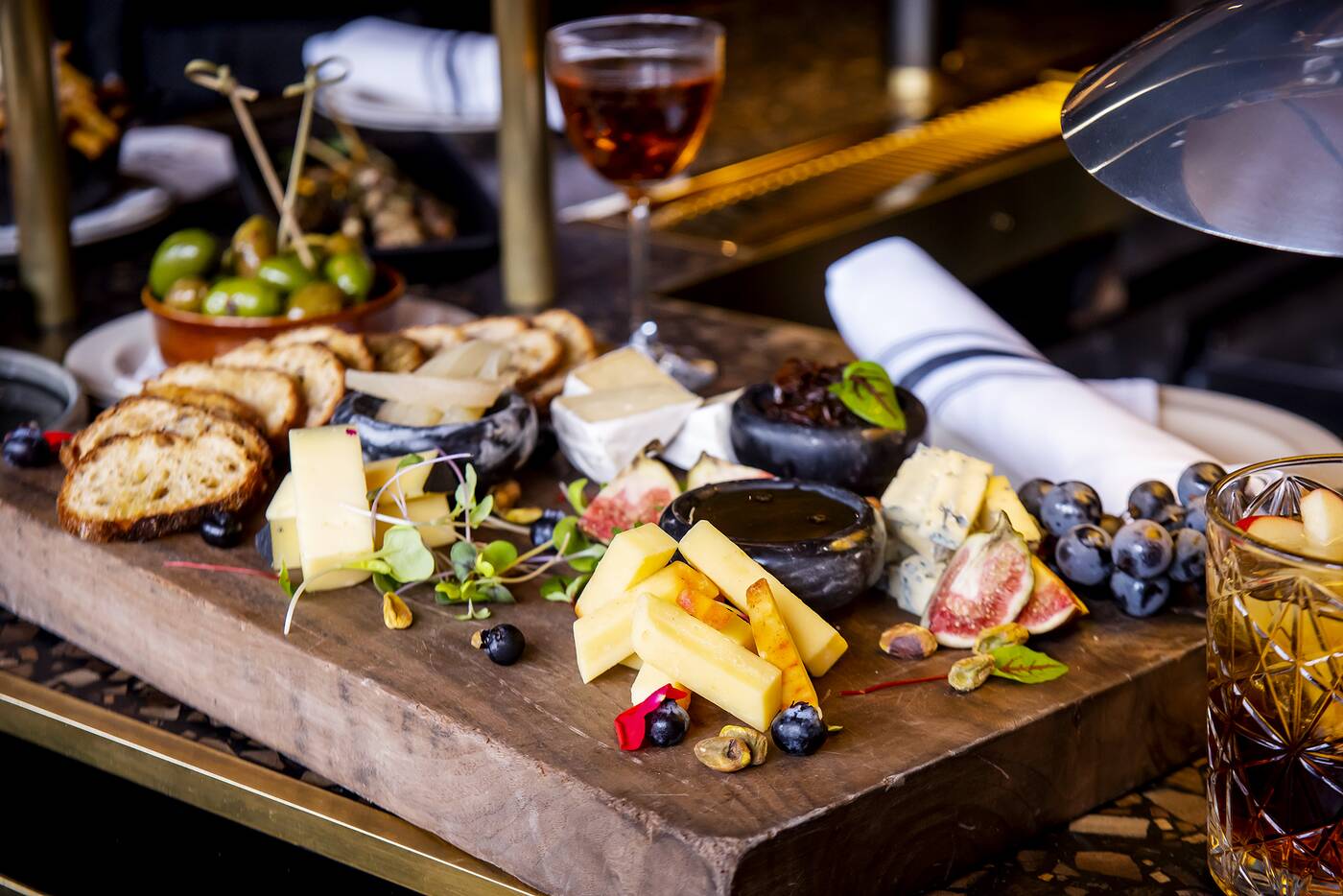 Snacks at the Hollywood-inspired bar include a cheese board (half: $26, full: $42) perfect for sharing. Four different kinds of artisanal cheeses, creamed honey, pistachios and sourdough crostini make up the platter. 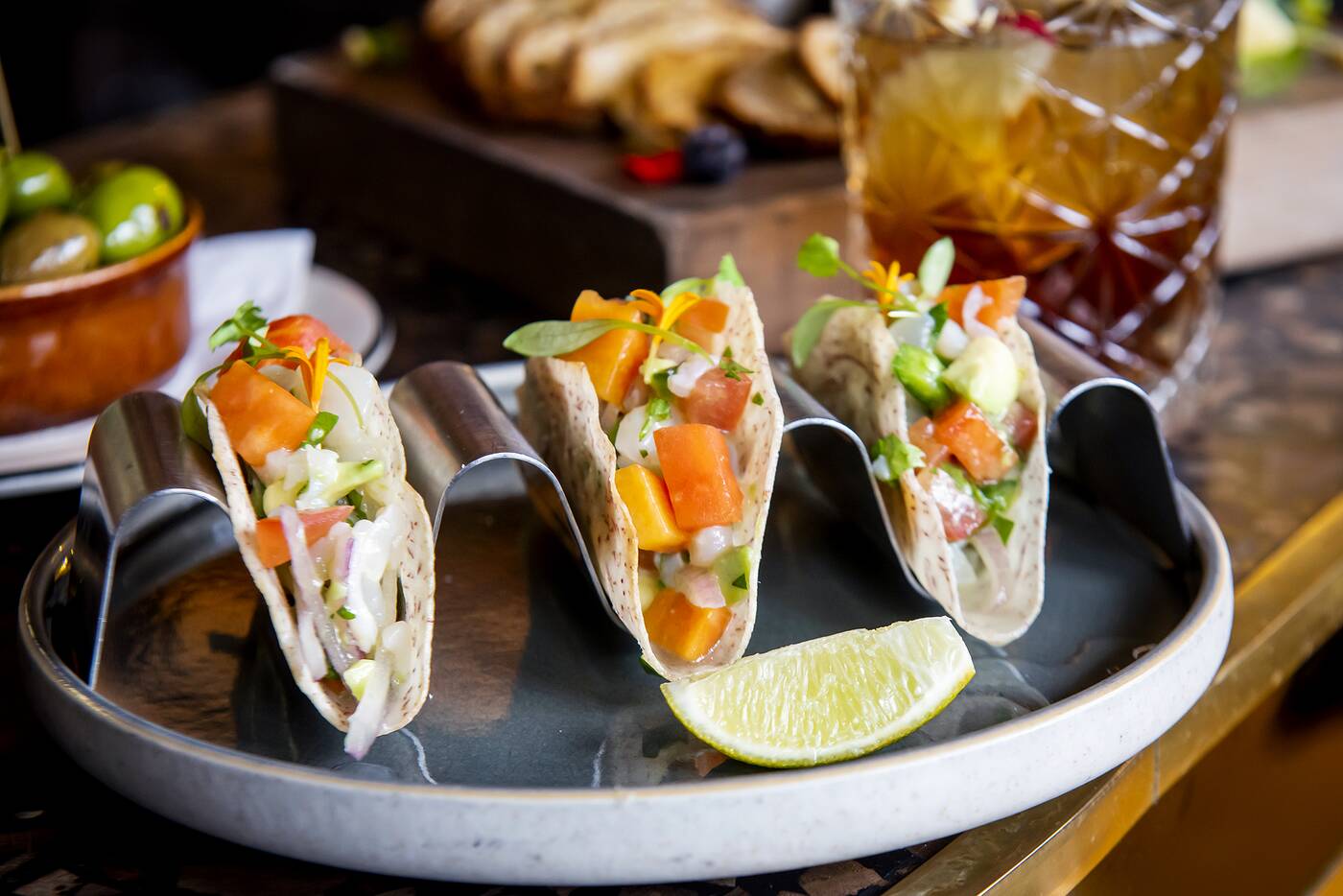 Scallop Ceviche Tacos (three for $20) come in taro shells and are filled with papaya, jalapeno, avocado, onion and cilantro. 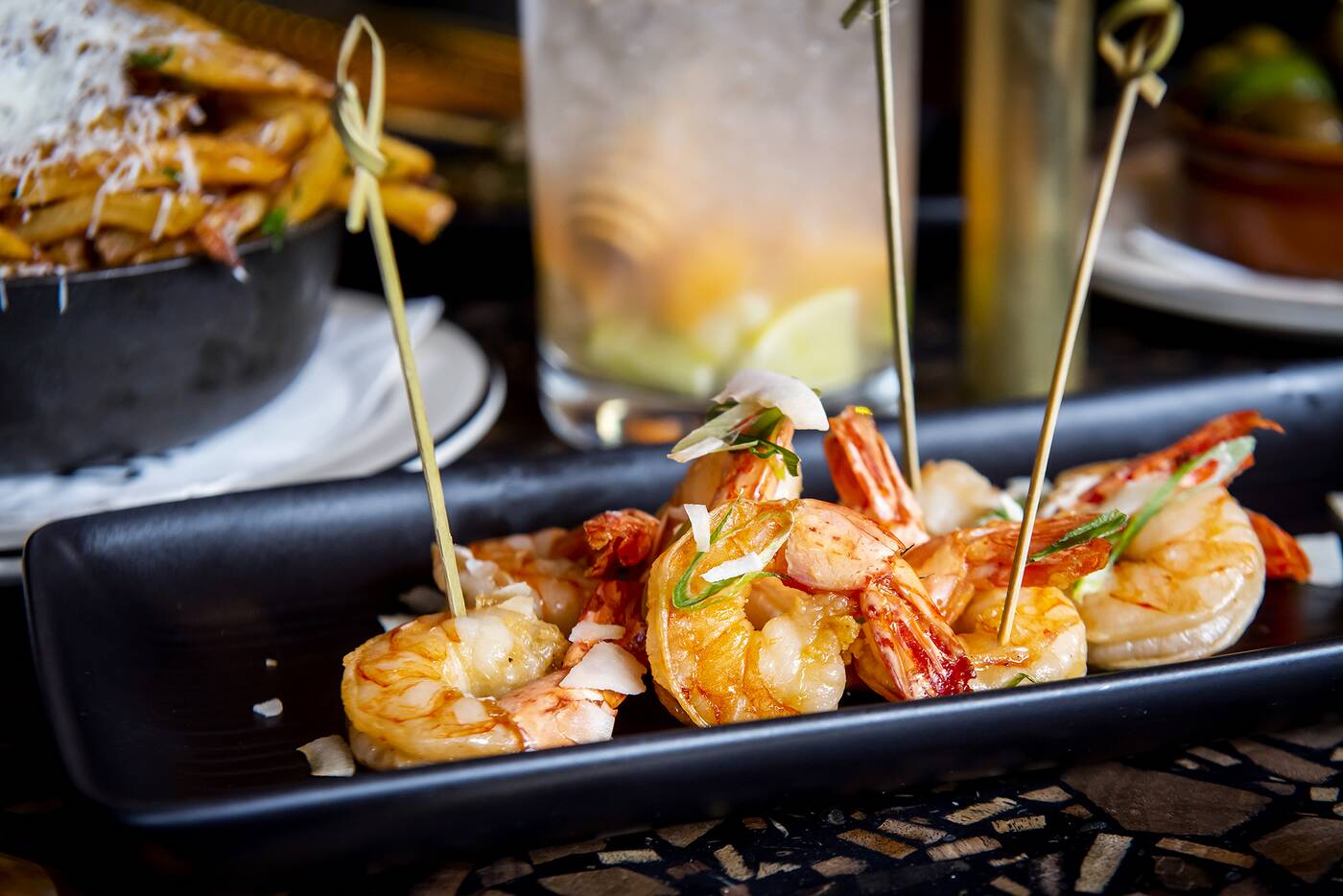 Bang bang shrimp ($19) covered in hot honey sauce are too good to put down and taste good on the side of pecorino dressed fries ($10) with truffle and tarragon aioli. 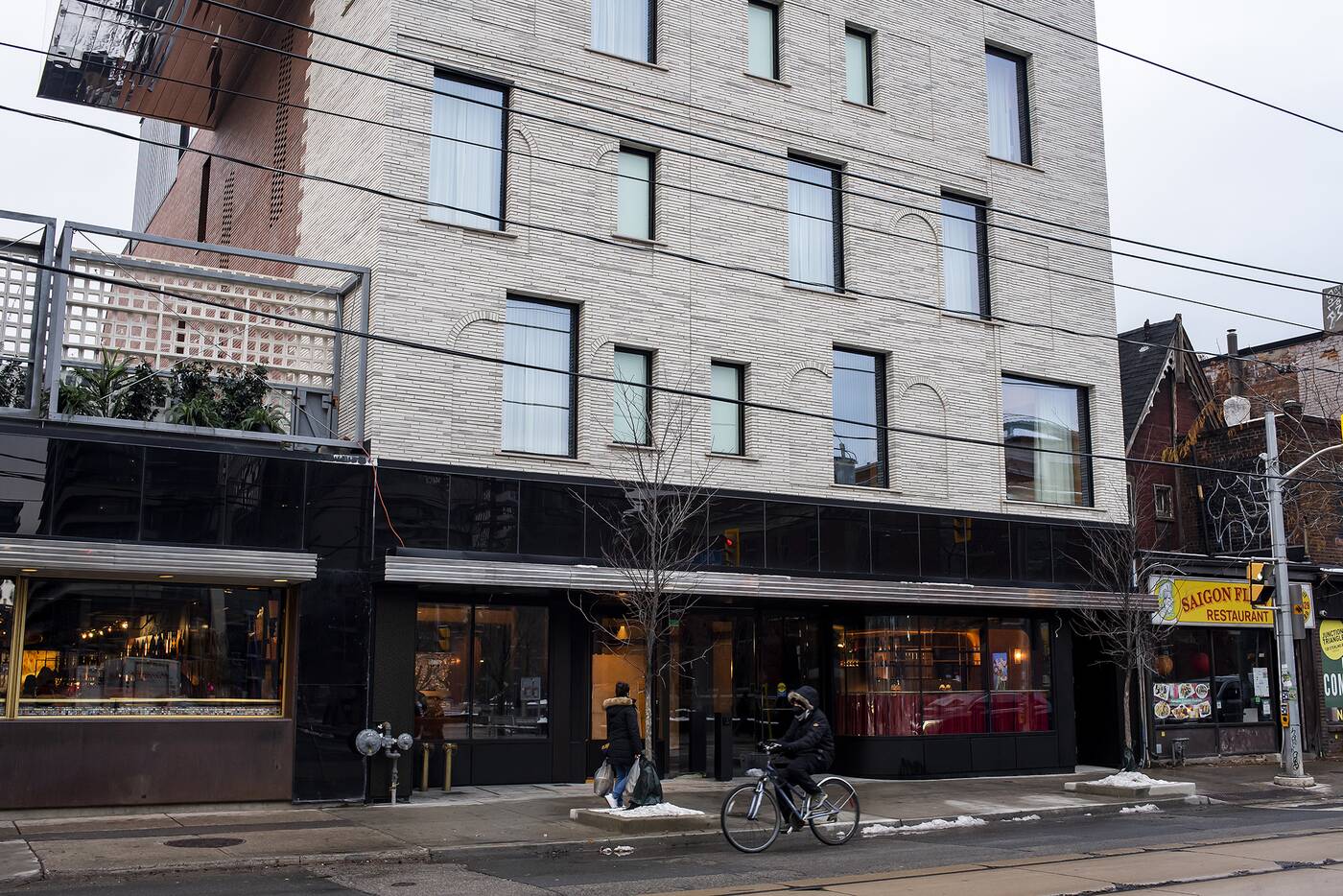 The Best Hotel Bars in Toronto

The Best Boutique Hotels in Toronto