King Blue Hotel Toronto sits at the corner of King Street and Blue Jays Way wearing a piece of the area's history – namely the Westinghouse Building – on its front exterior.

The north and west facades of the nearly century-old facility with heritage designation were preserved to be part of the city's latest boutique hotel that first broke ground in 2015. 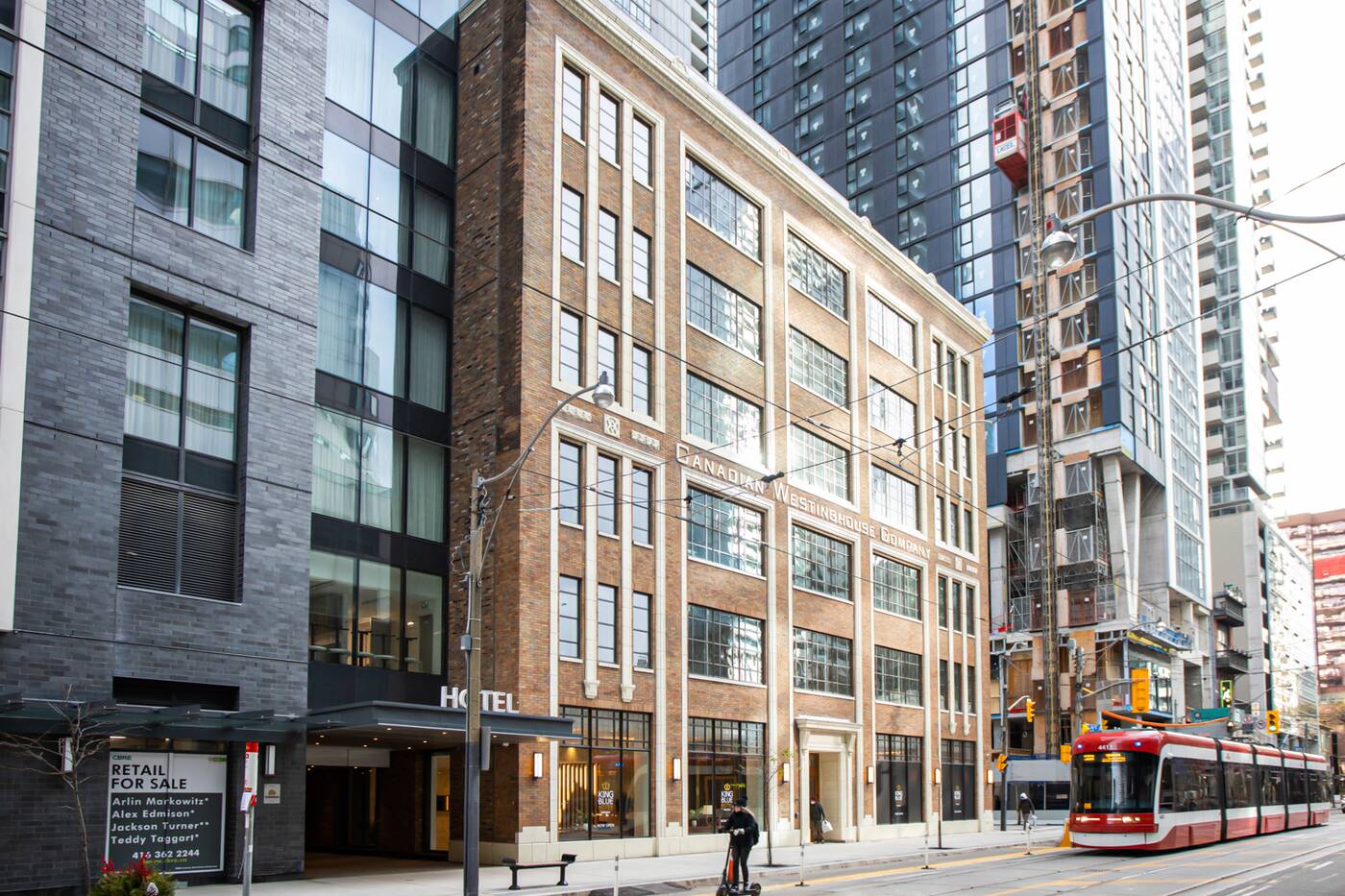 The first three floors of the art deco building went up in 1927 by a U.S.-based electric company to support its factory in Hamilton, which opened 30 years earlier. Three more floors were added a few years later making it the six-storey building it still appears as today. 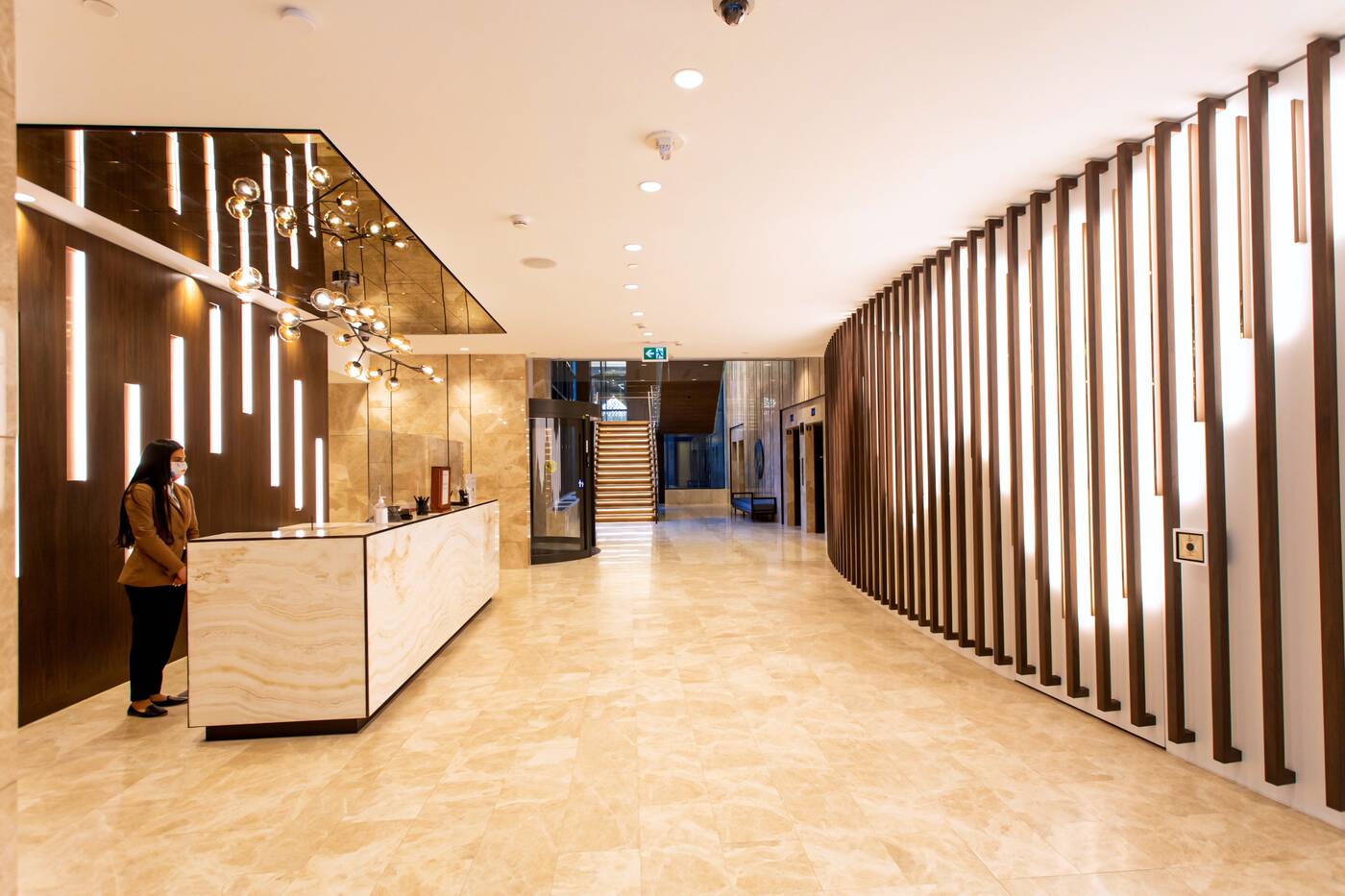 But inside is nothing like it used to be, with the terracotta-trimmed brick exterior giving way to a space designed by CHIL Interior Design. The hotel lobby is sleek if a tad boring, and uses marble, various metals and wood against a simplistic colour scheme of black and brown. 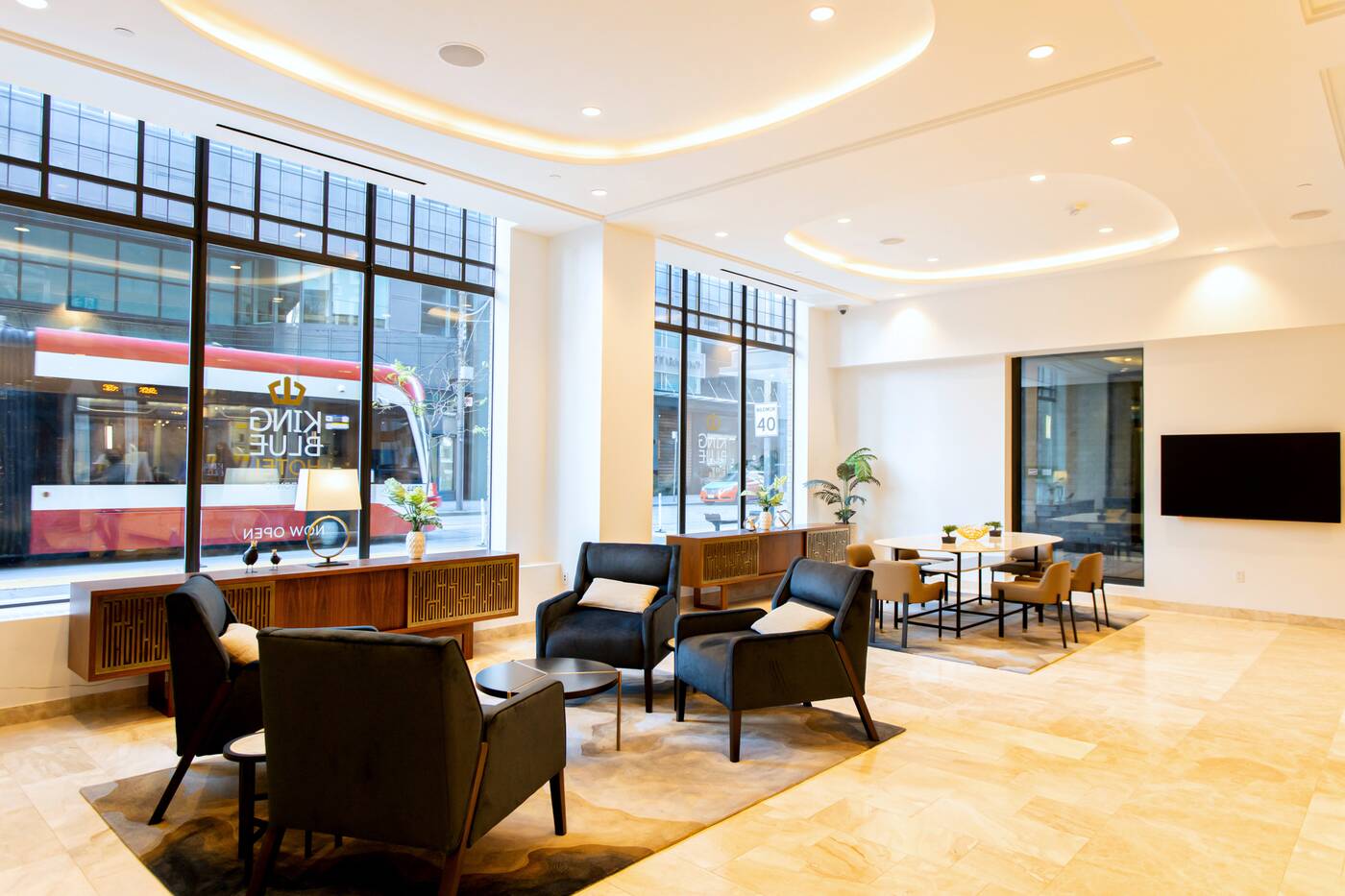 The hotel (that feels geared to business travellers exclusively) is connected to two 48-and-44-storey condo towers sitting behind it.

Originally constructed by the same developers of the condos, Greenland Group, it's since been acquired by Northland Properties, which already owns 60 hotels including Sandman Inn and Sutton Place. 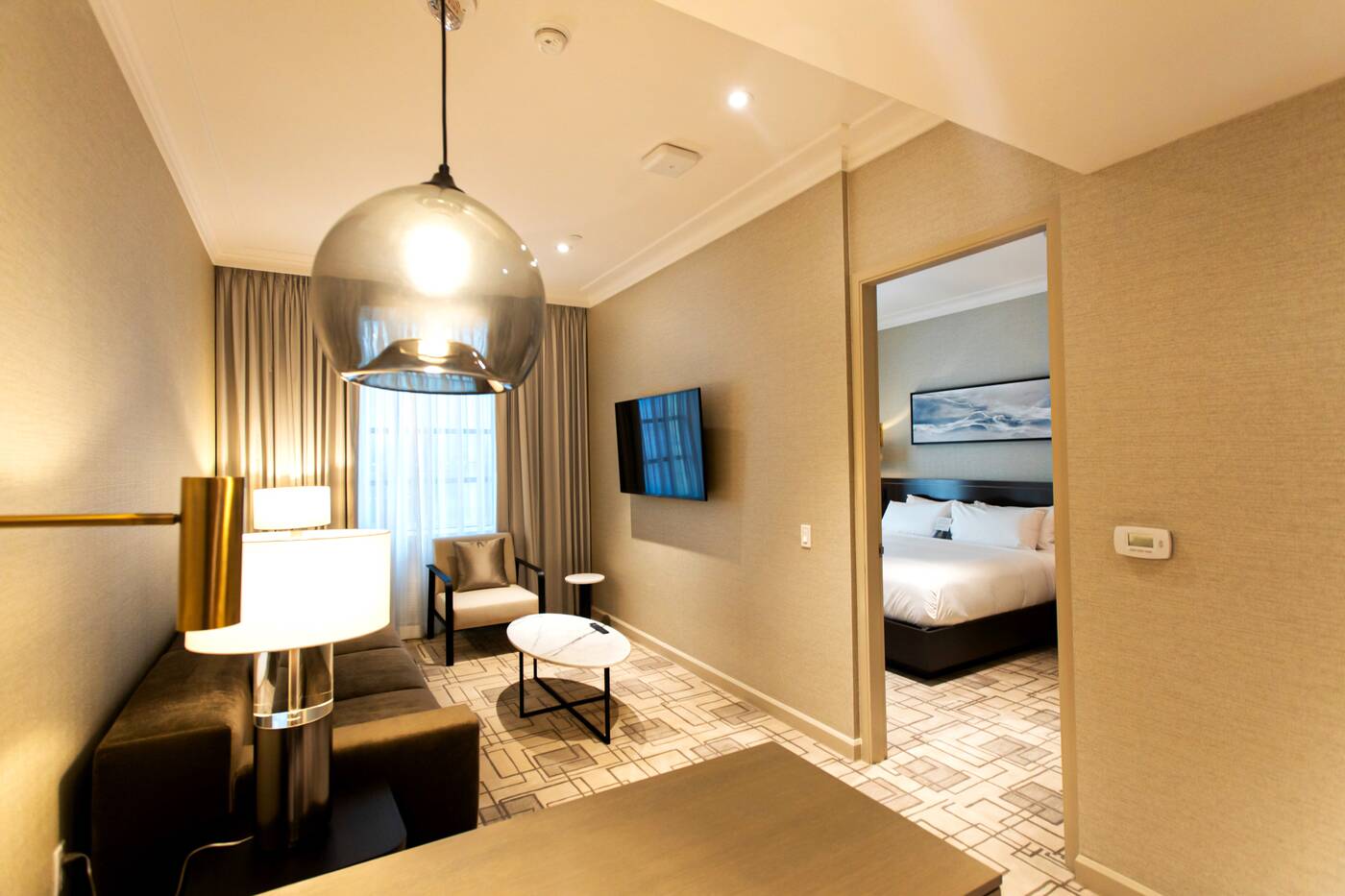 There are 118 guestrooms, including seven suites, and you can be assured once you've seen one, you've seen them all – save for a slightly different floorplan. 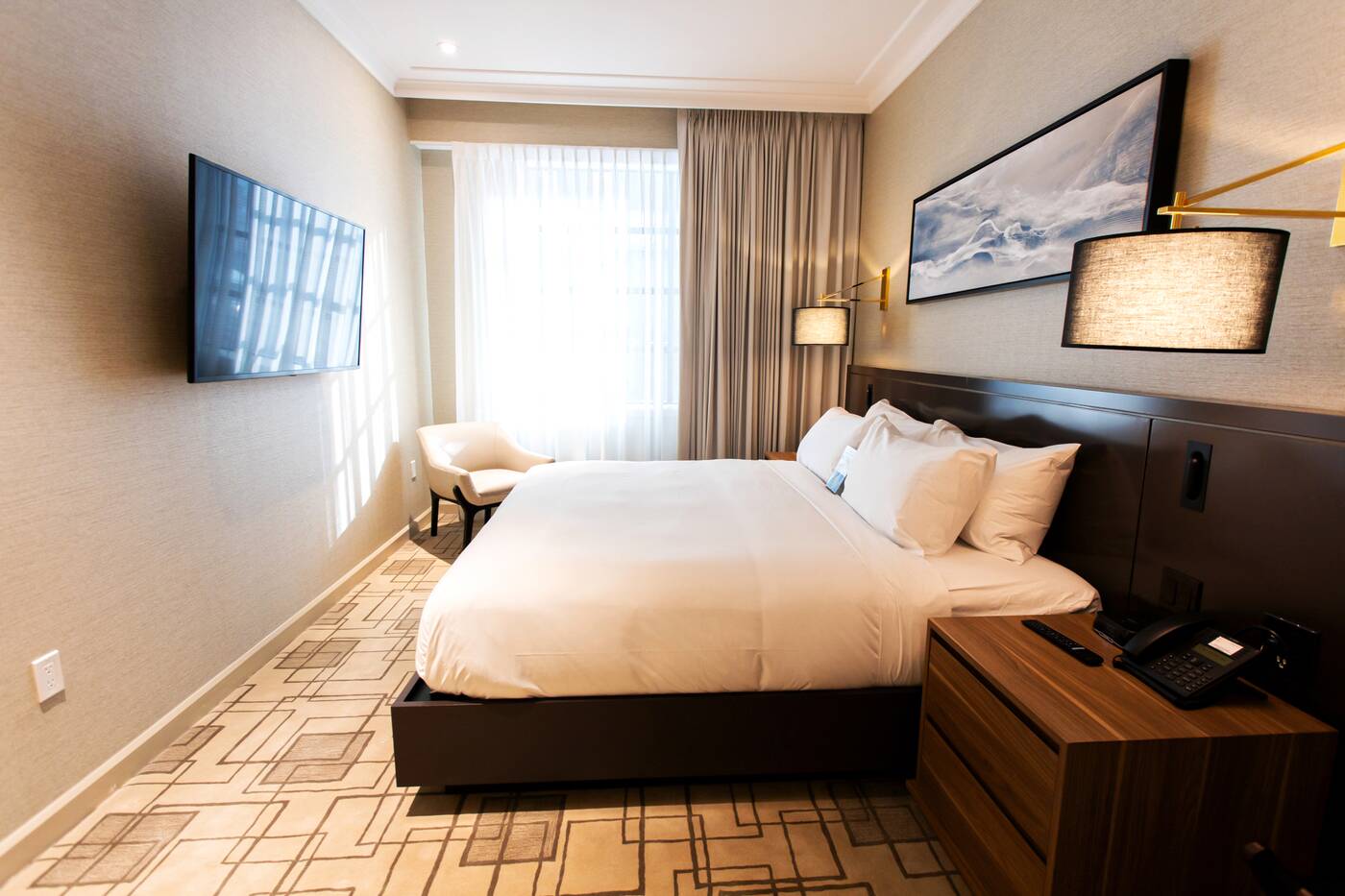 The king suite features a separate living space with seating around a wall-mounted TV and another telly facing the plush-looking bed. 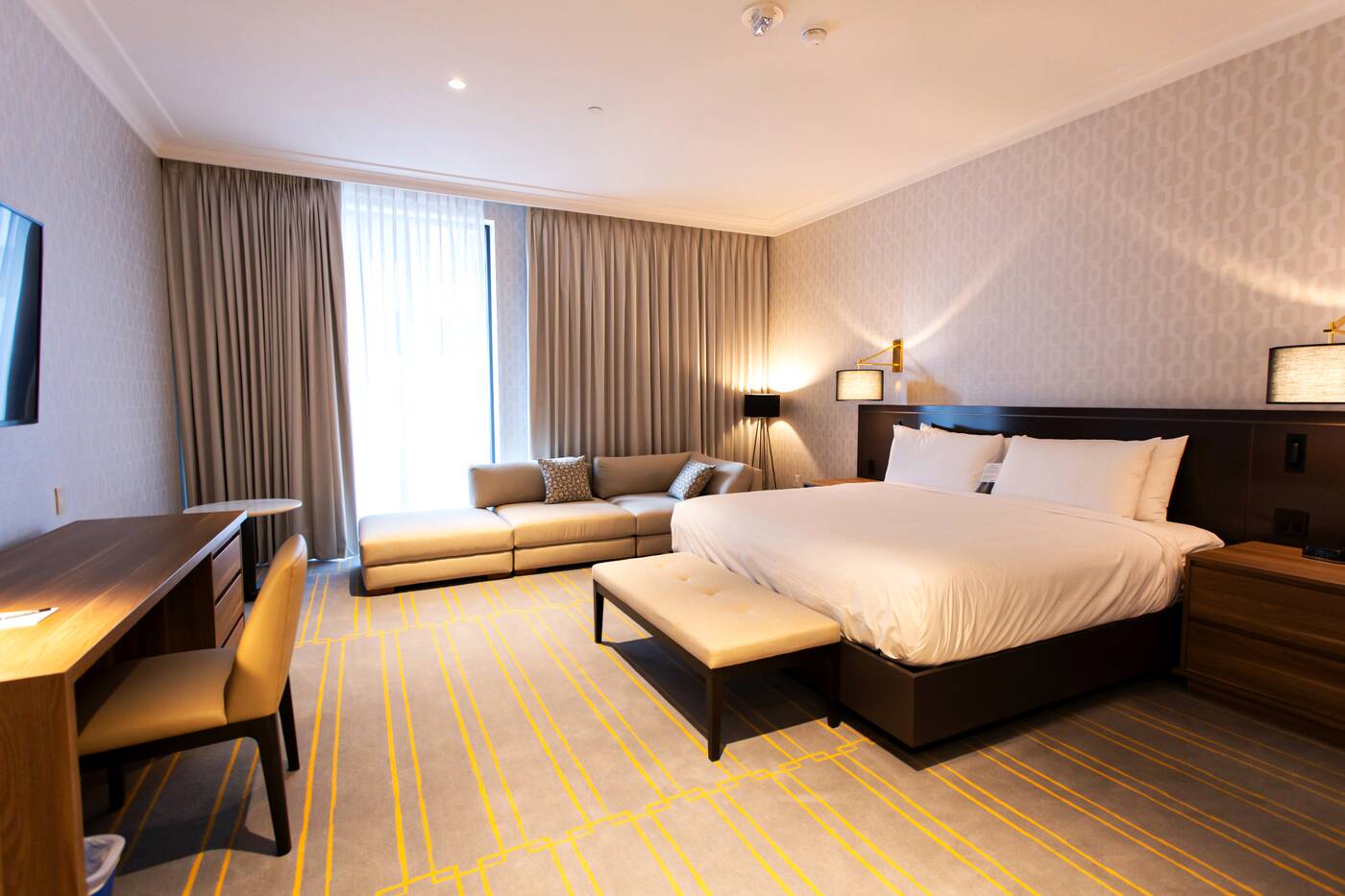 The classic king room looks identical. Though without the wall to break up the room it ends up feeling more spacious despite appearing slightly smaller in size. 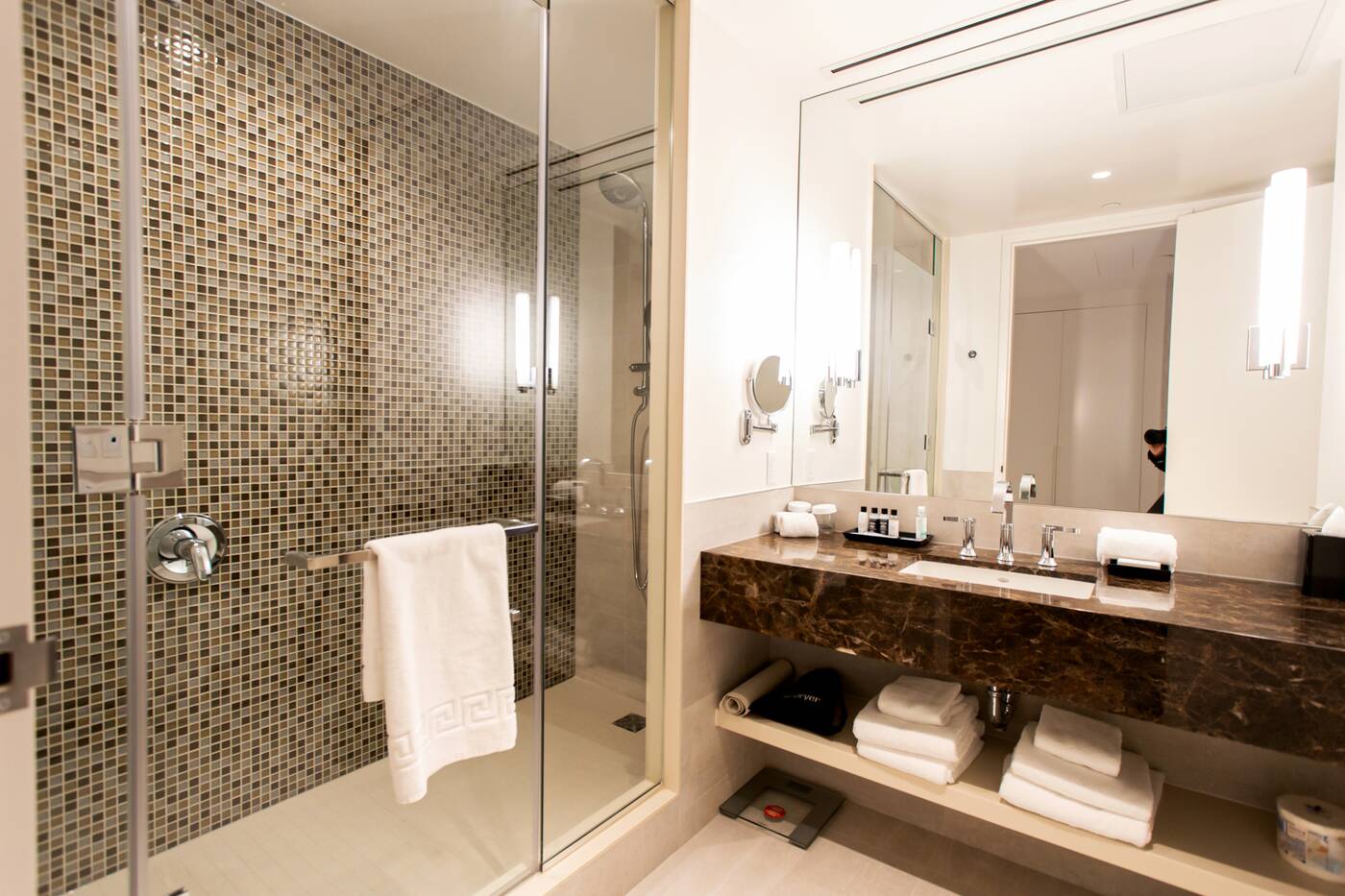 Although it's nothing fancy, it's certainly comfortable enough for a relaxed night of room service and catching some z's. In the bathroom, find a walk-in rain shower. 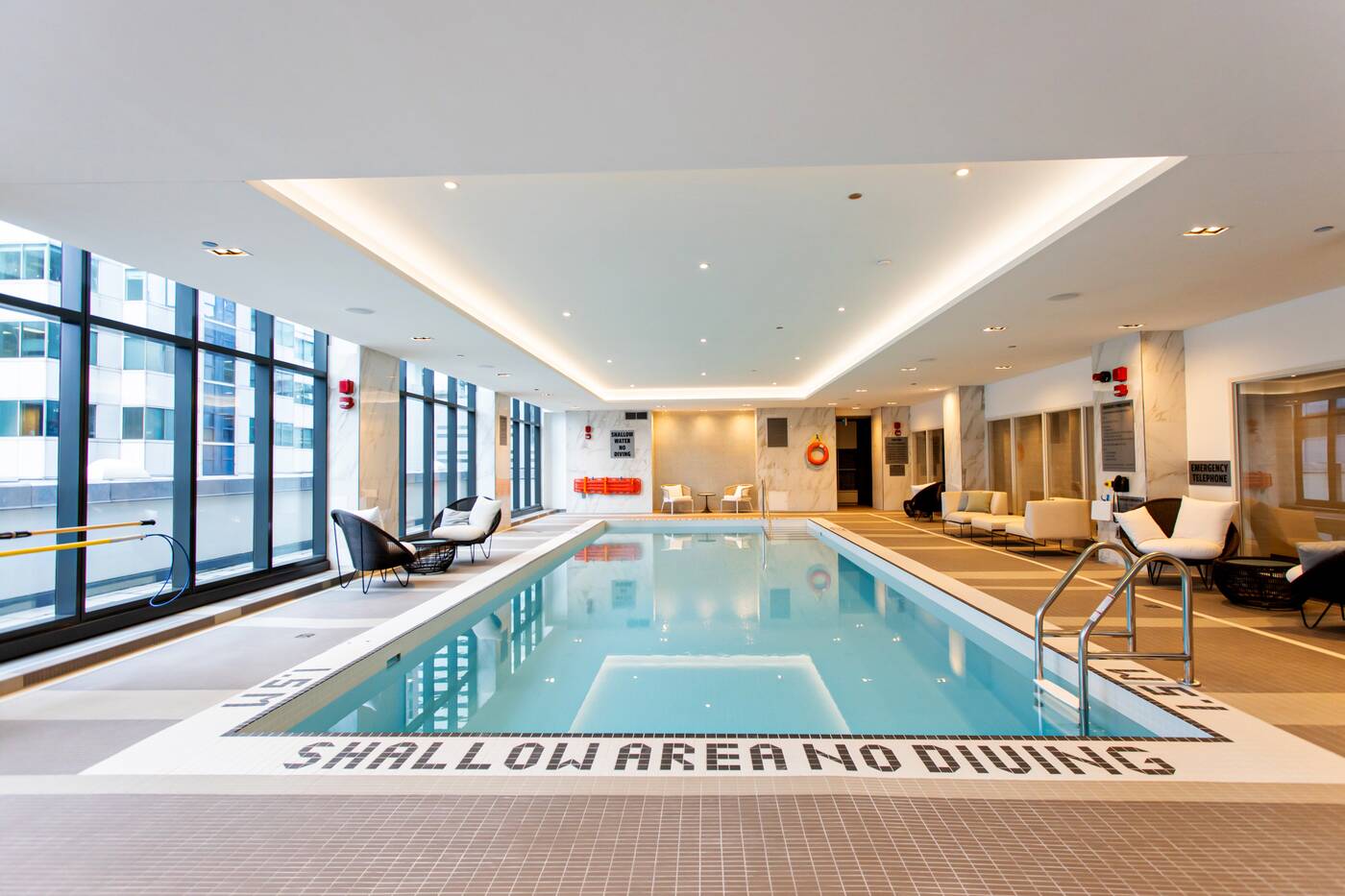 Condo tenants share the amenities with hotel guests including the indoor swimming pool on the seventh floor, which would be an added perk during a winter stay. 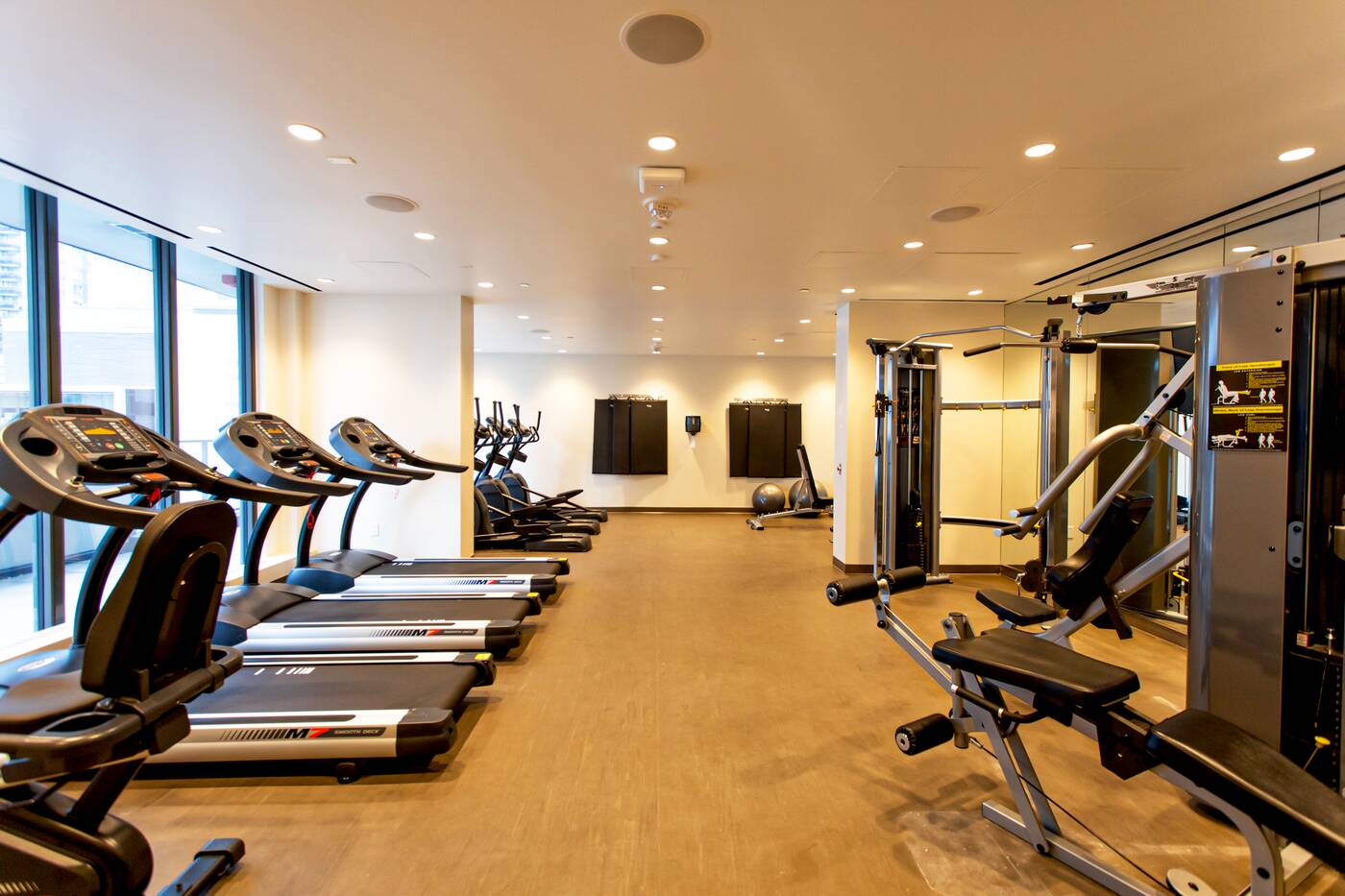 There is also a standard gym that comes equipped with various treadmills, bikes and weight-lifting machines. Everything you'd need for a decent workout away from home. 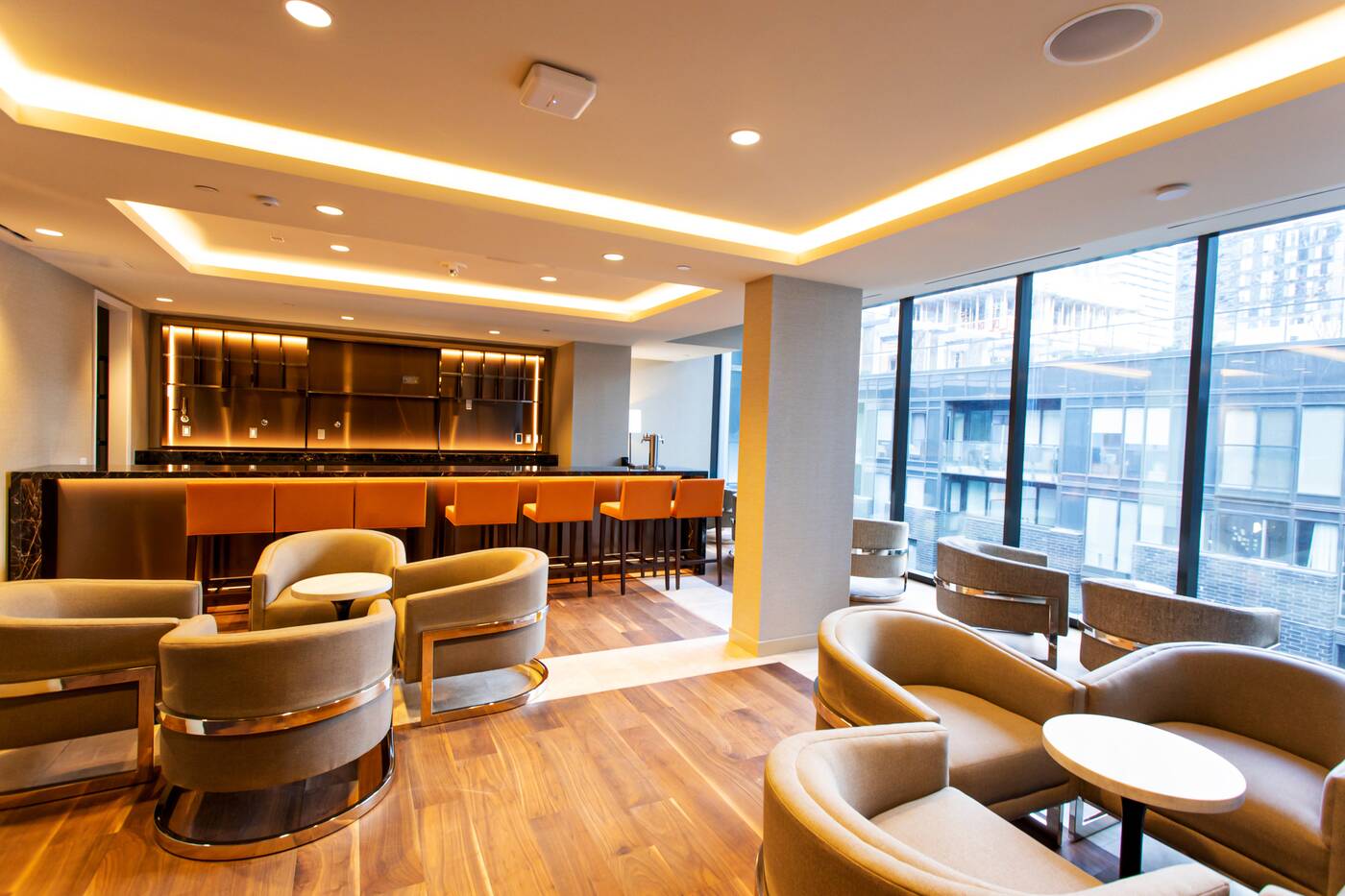 The executive lounge with a 60-person limit, a bar and comfy loungers can be used for any sort of event or business meeting as long as you book in advance. 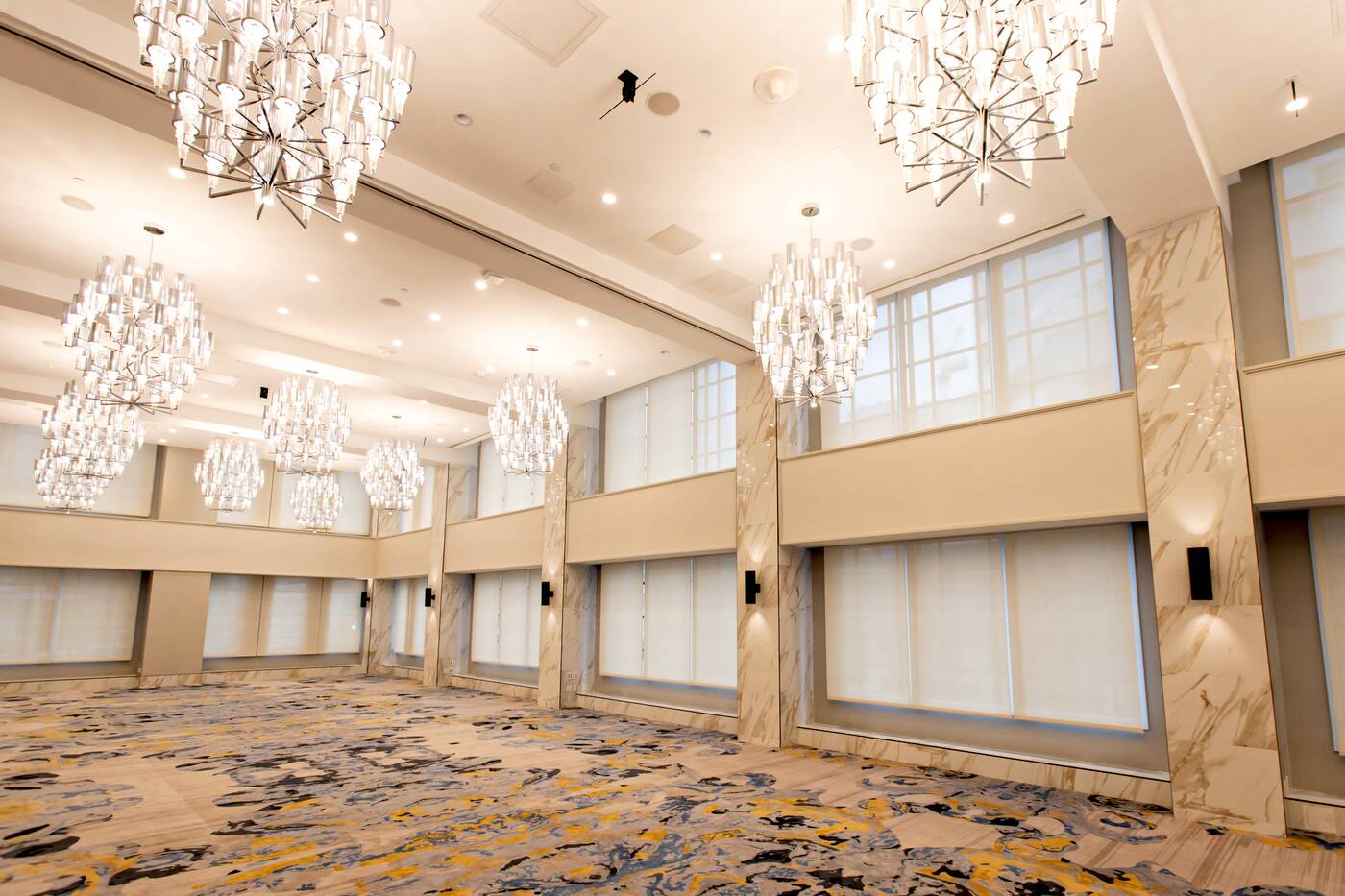 Fit for a bit more of a swankier occasion is the large banquet room, which can hold over 250 people at a time. About a dozen fancy chandeliers hang overhead. 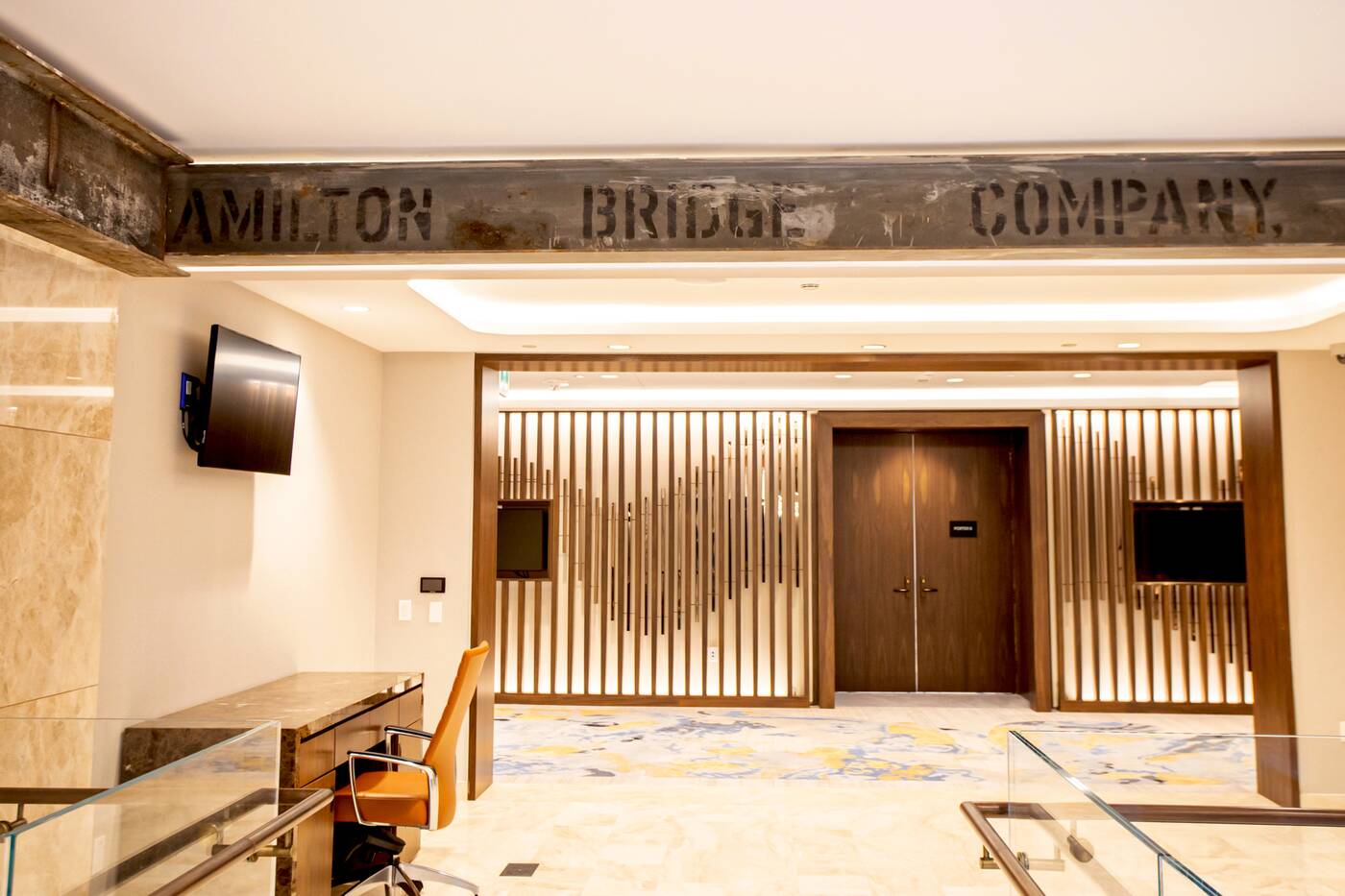 The last thing left from the inside of the old Westinghouse Building is the original ceiling beams that can be spotted walking up the winding staircase from the lobby to the second floor. 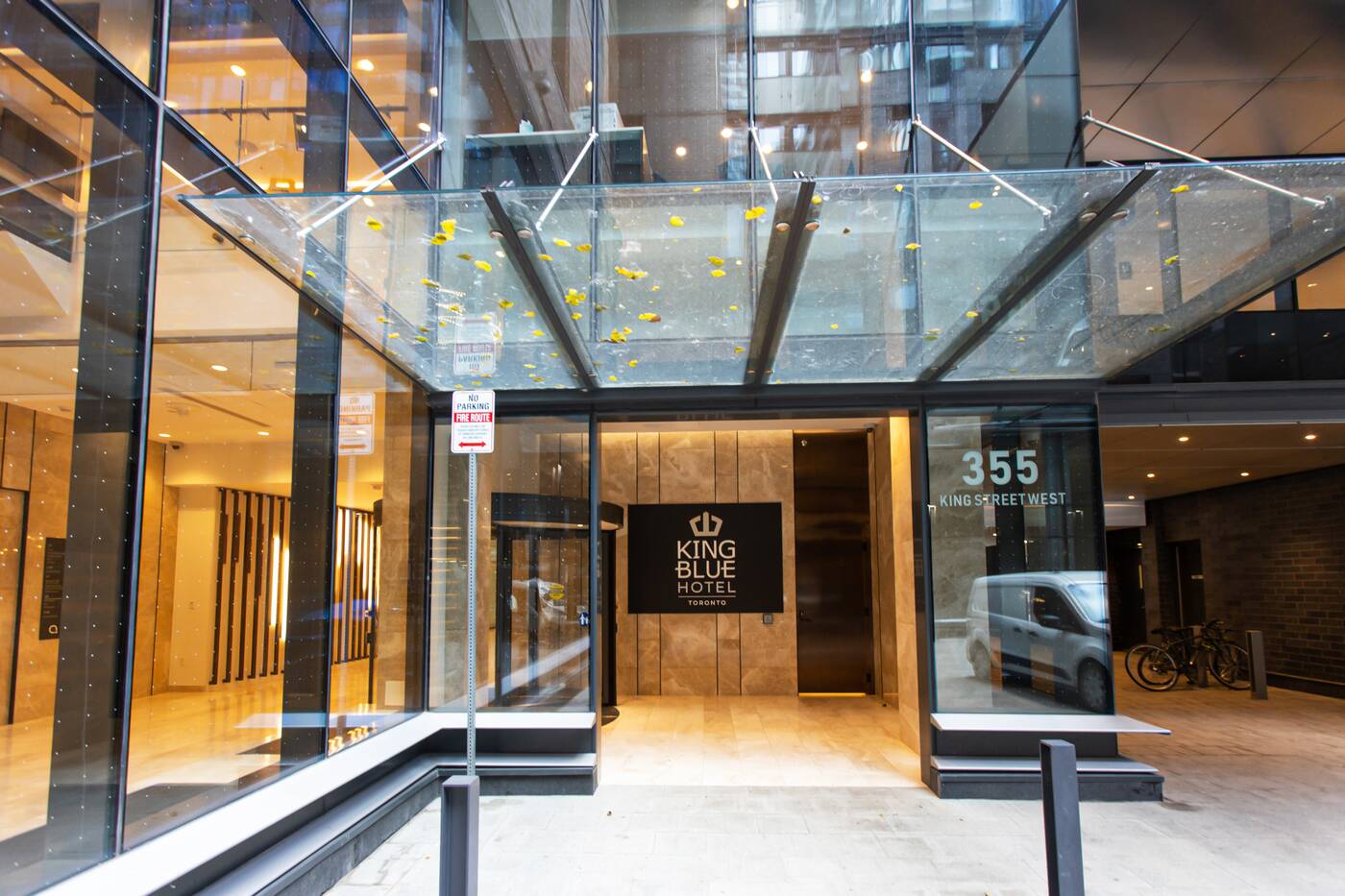