The hotel owned by Marriot International Inc. has been a long time coming to the city, its opening was delayed by two years due to lockdowns. 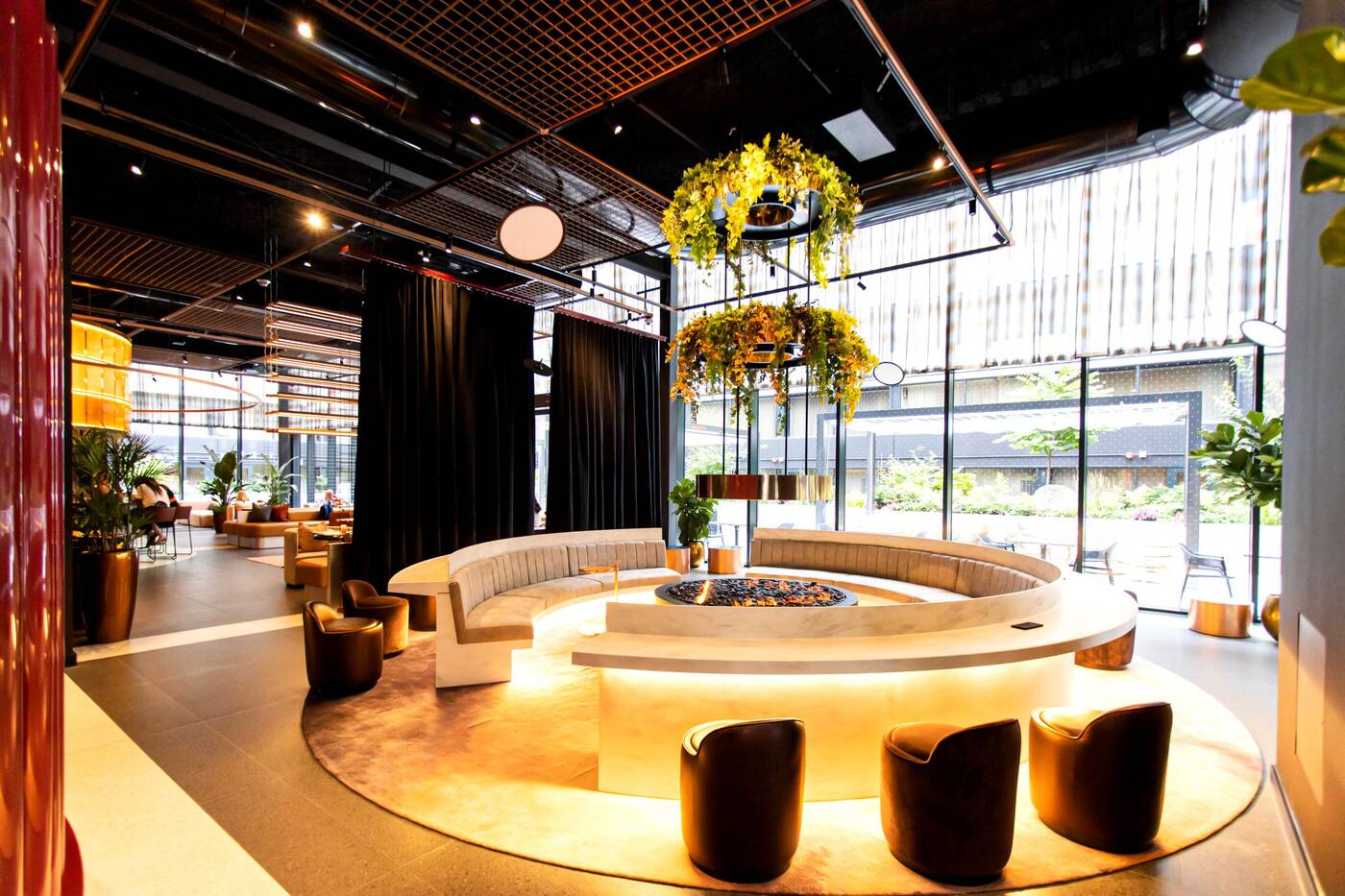 The W underwent some major renovations during that time, totalling $40 million after being transformed from its previous life as the old Marriot Bloor Yorkville Hotel.

The W brings a different feeling of vibrancy to each floor, starting with the Living Room otherwise known as the lobby. 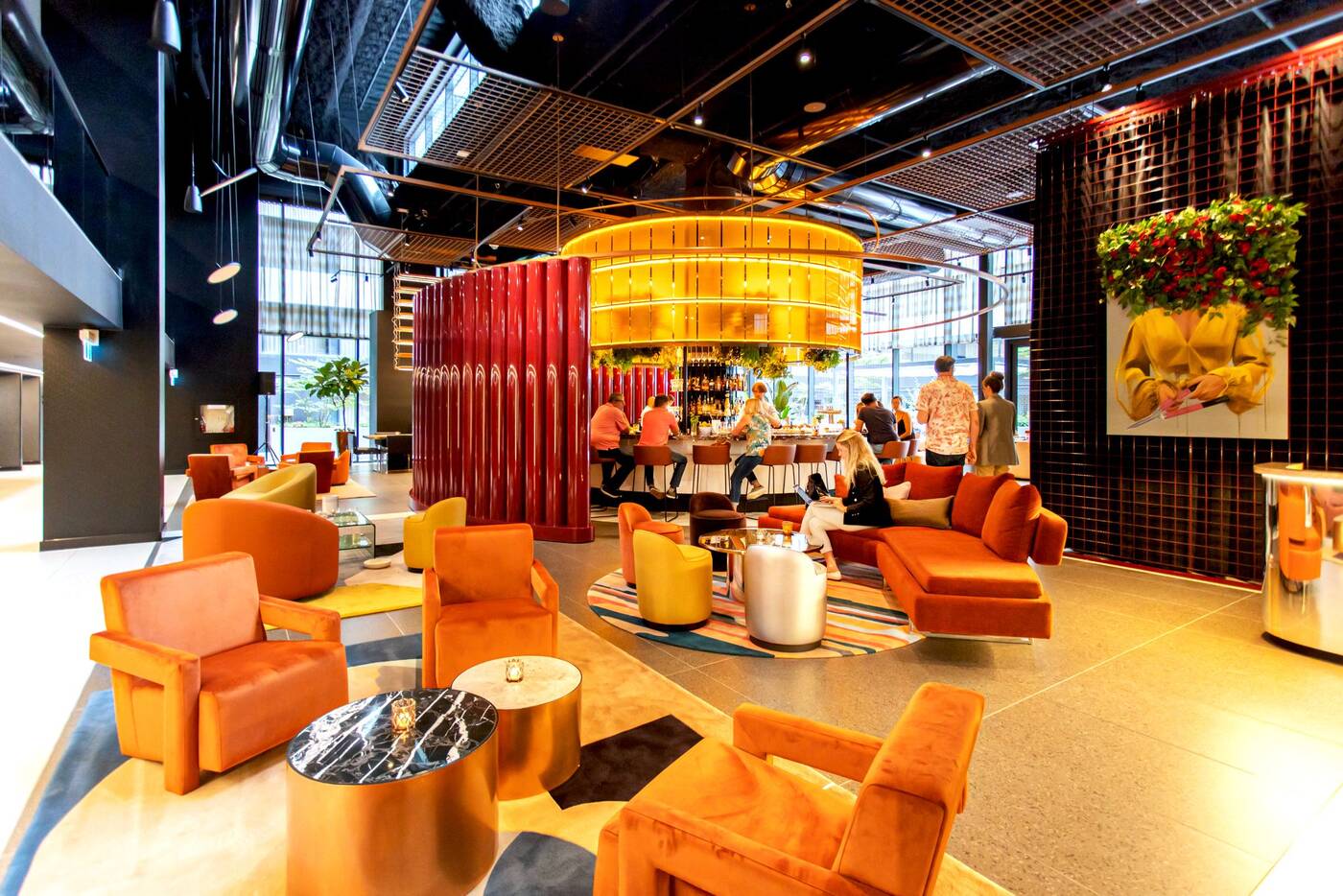 This level takes on a modern twist to 60's vintage with orange couches and warm lighting radiating from the top of this floor's bar.

The Living Room looks different at each of the 52 W's around the world, but is meant to symbolize a comfortable meeting space that feels like home.

We'll return back about the dining opportunities on this level, but first, let's dive into what you can expect a typical room to look like after you check-in. 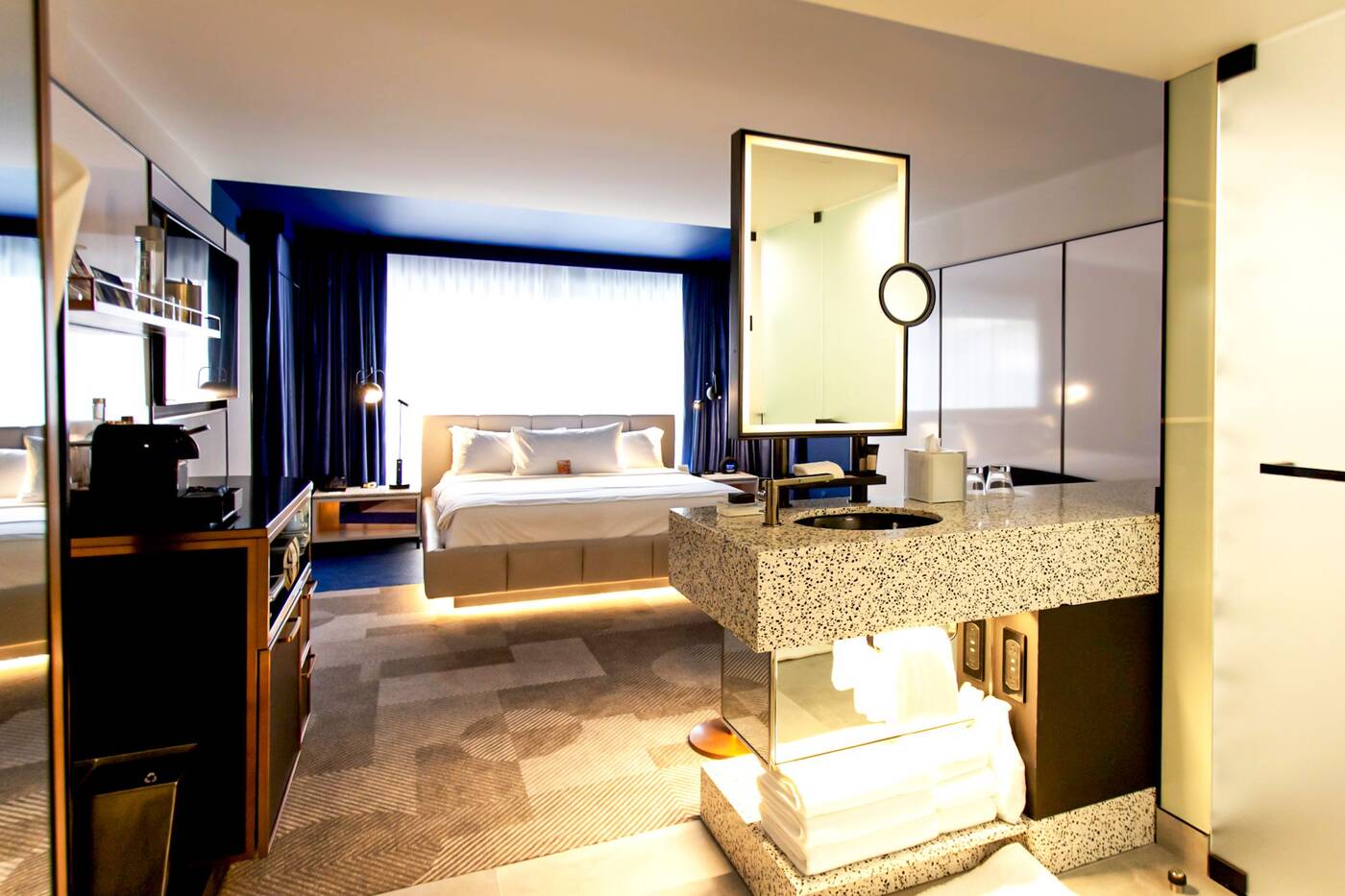 A standard King room starts at $629 per night (yes, you're paying for luxury) but prices here can reach as high as $1250 for the Extreme Wow Suite. 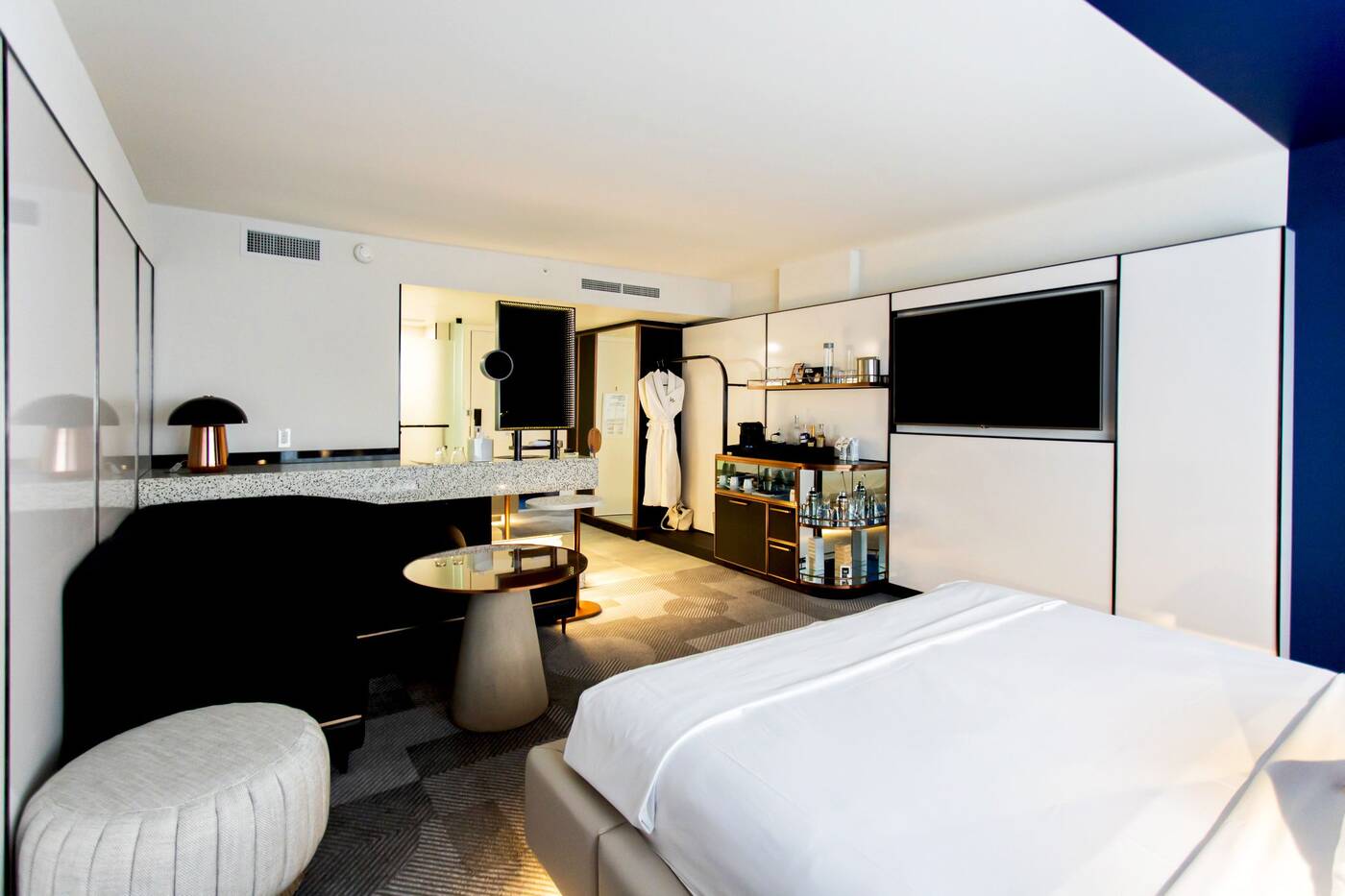 The King Room comes equipped with a three-piece bathroom, mini bar, television, coffee machine and lounge space with a few chairs and a table.

Okay so you've dropped off your bags at your room, but aren't quite ready to see the sights of the city yet. 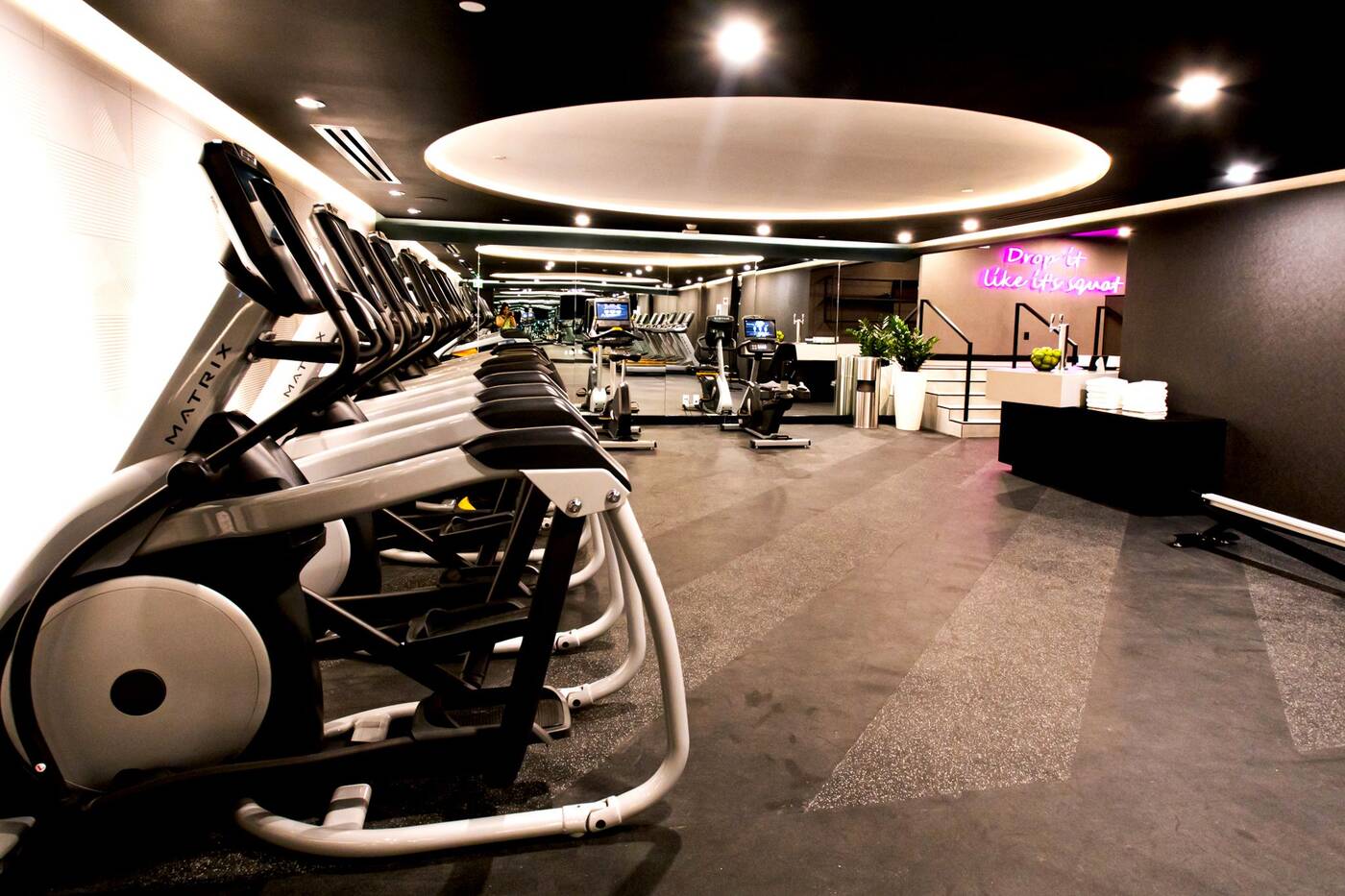 Why not break a sweat at W Hotel Toronto's 3,300 square feet of fitness facilities. Whichever kind of workout your feeling, the hotel has the equipment for it. 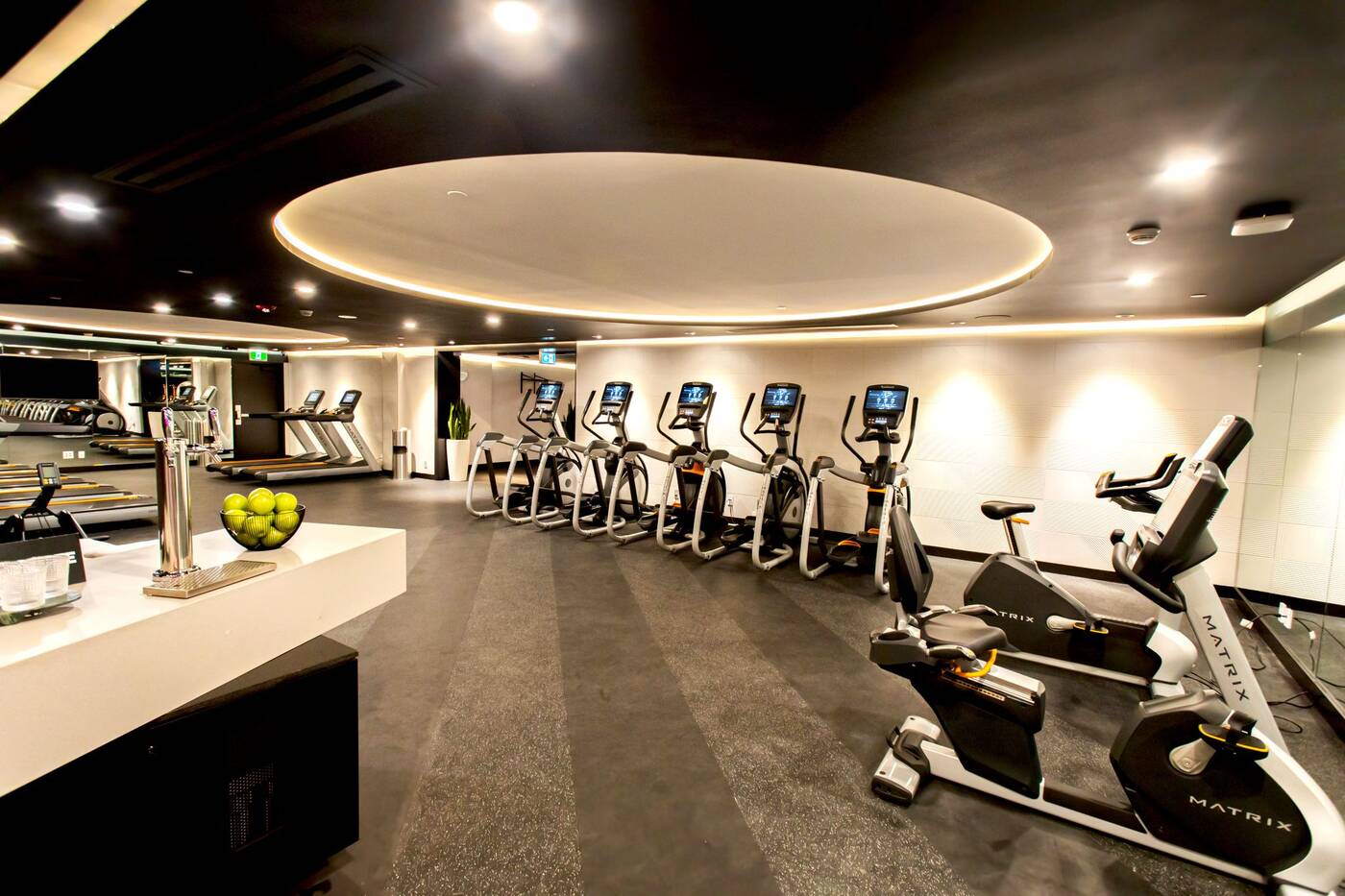 Squat racks, treadmills, a boxing bag and ellipticals are available for use if you want to jump on a machine or have some privacy in their aerobic room for yoga or pre-workout stretches. 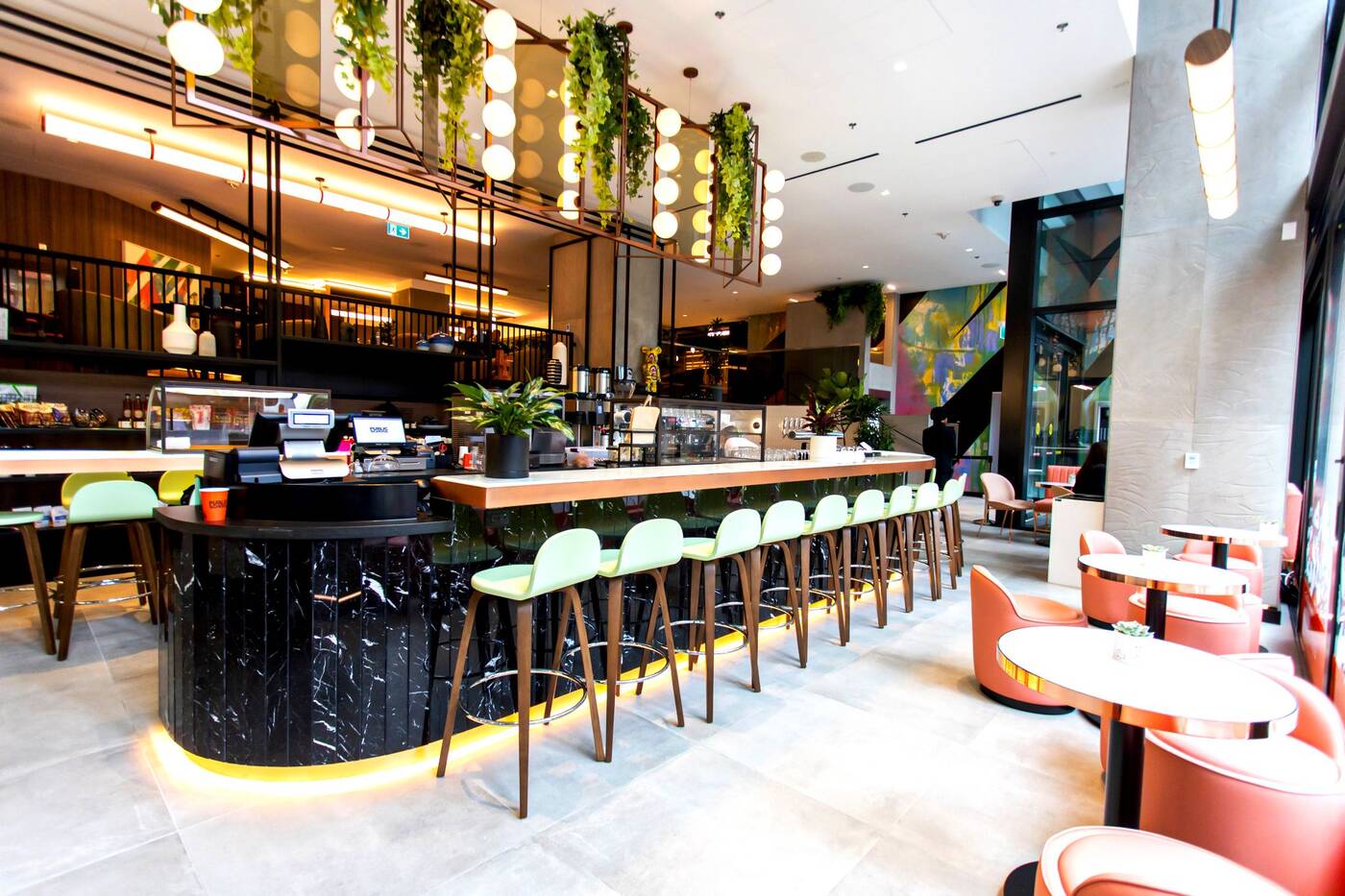 You might want to refuel after exercising so head over to the first floor where you'll find PUBLIC School, a cafe on the bottom level and plant-forward restaurant just above it. 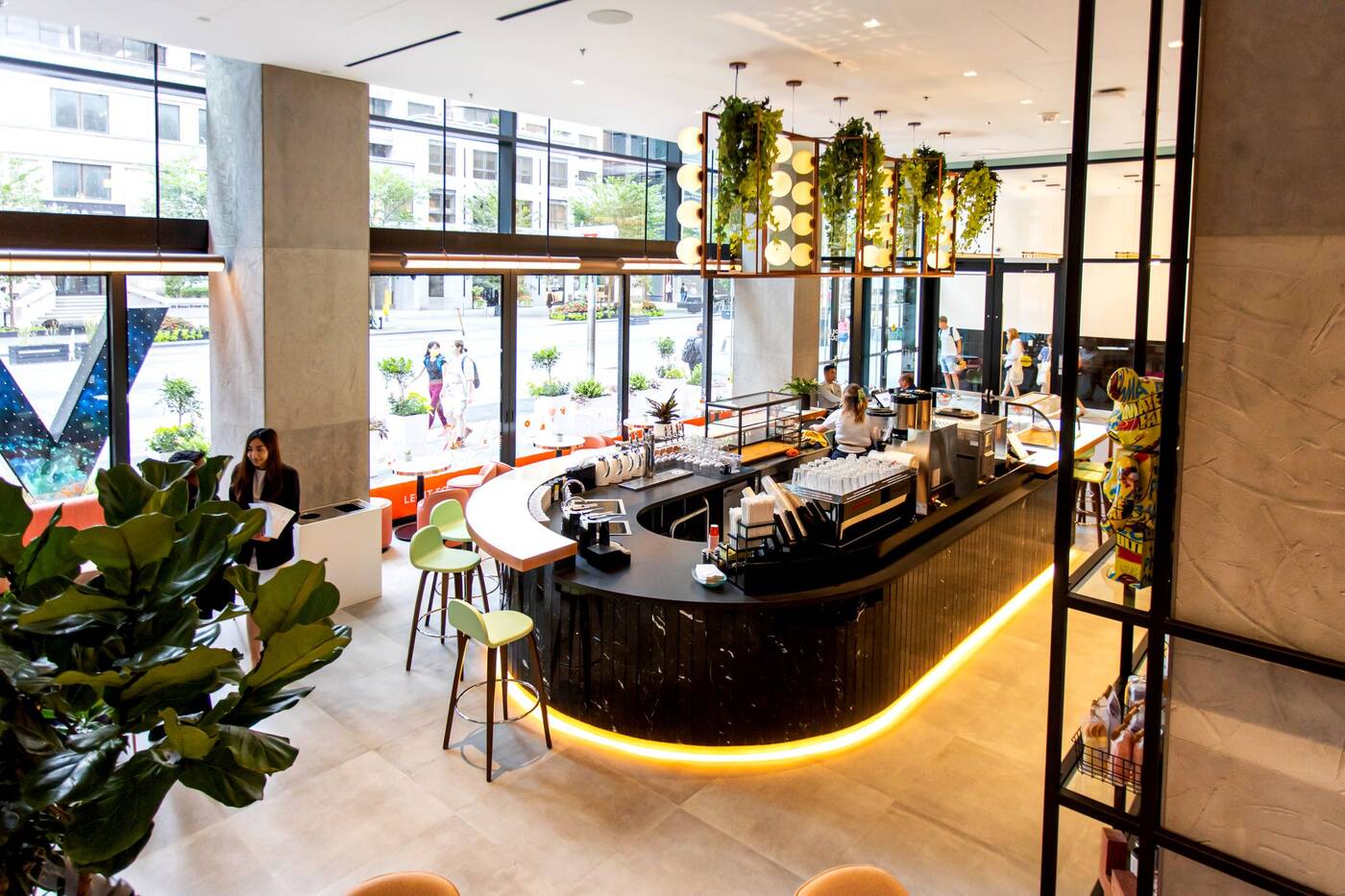 The cafe offers an array of pastries, snacks, coffees and teas, plus the giant wrap around counter would be a good spot to get some work done or set up an in-person meeting if needed. 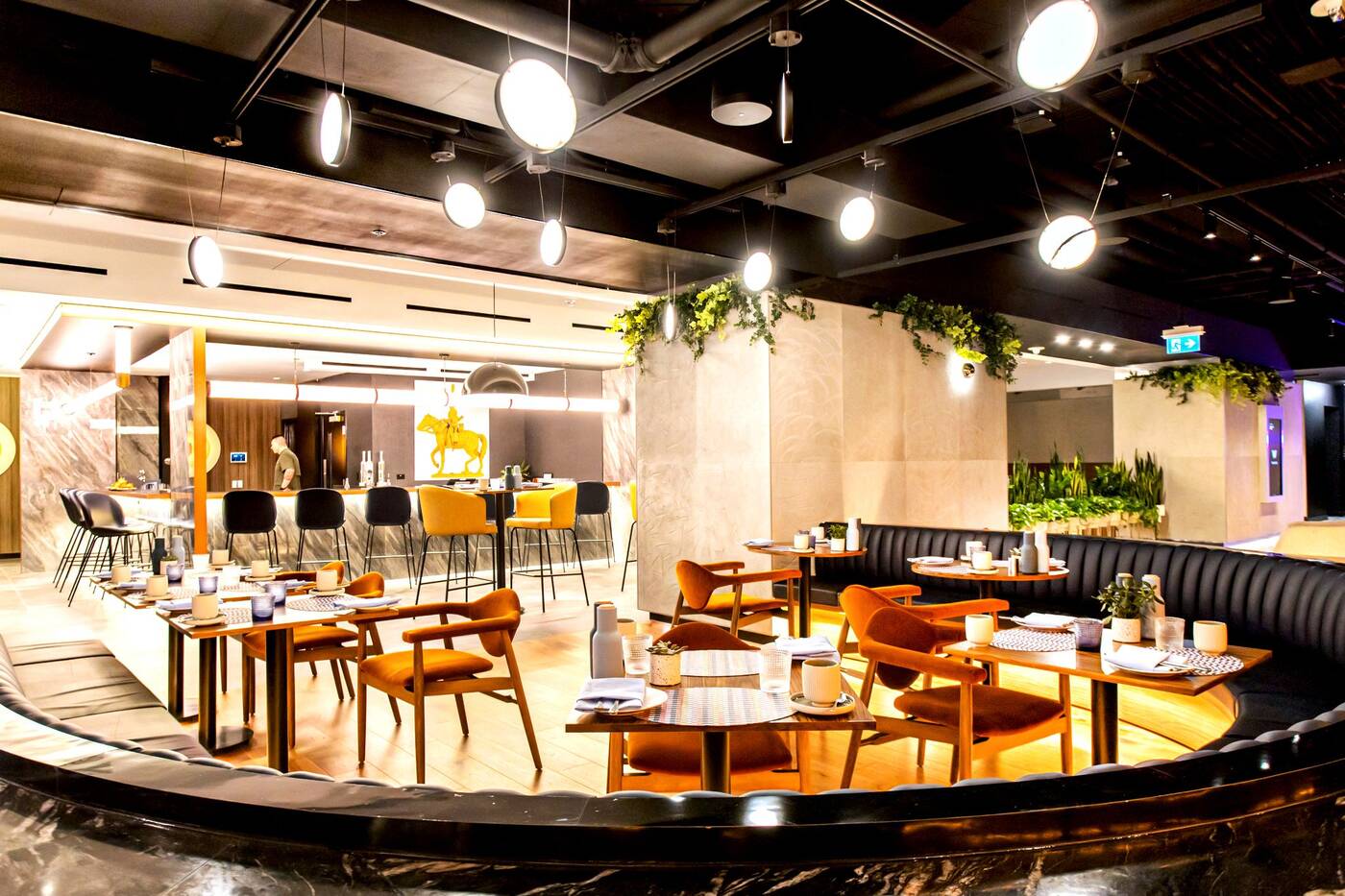 The second half of PUBLIC School is part of W Hotel Toronto's three dining concepts led and curated by executive chef Keith Pears.

Pears sports an impressive cooking background, competing in Best of the West and CityTV's Master Chef. He won on a season of Chopped Canada and struck gold at Canada's Great Kitchen Party. 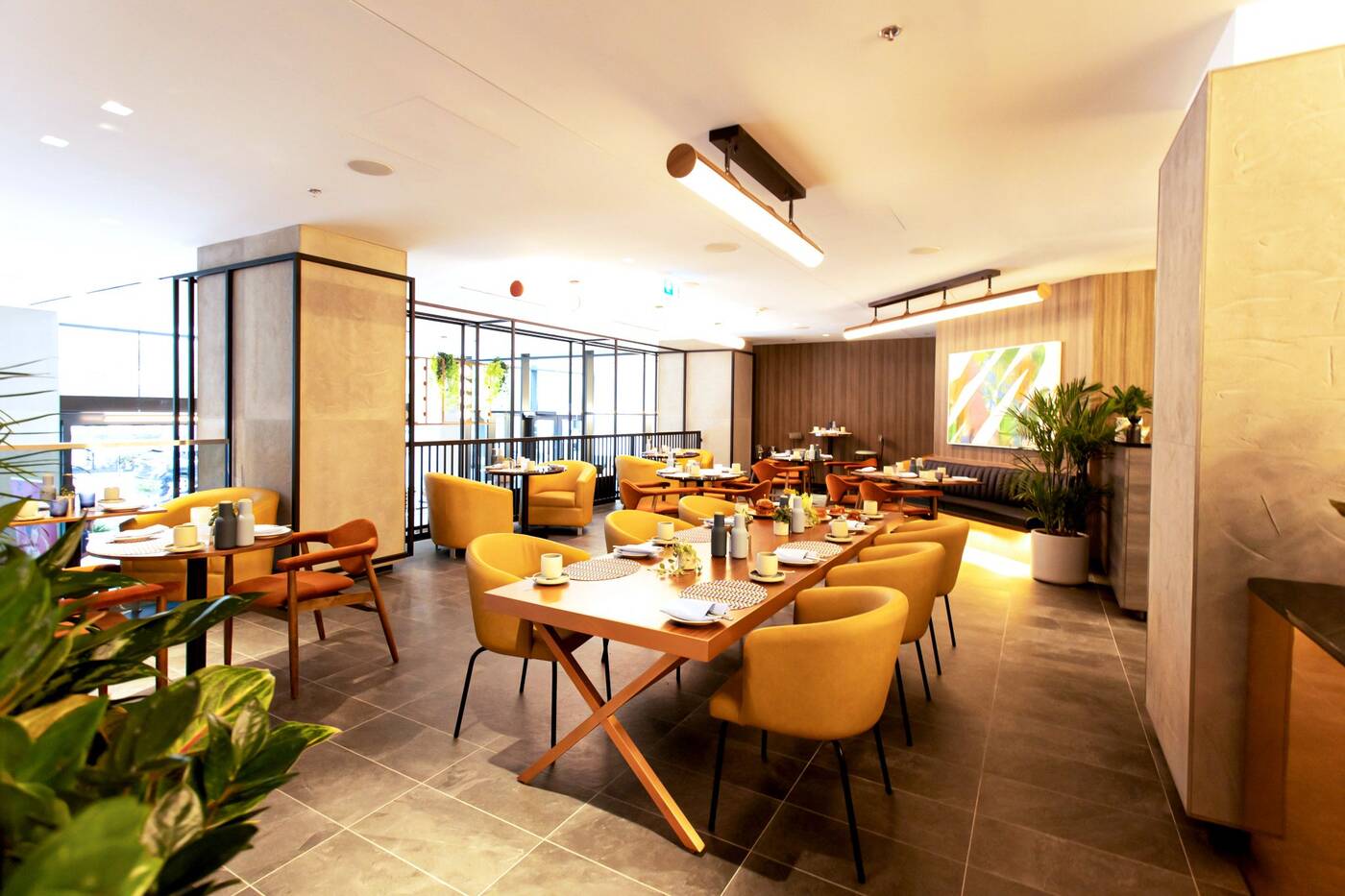 As a daytime spot, the dining area of PUBLIC School restaurant is designed with a sleek look of neutrals and greenery spotted through the space.

The focus on this level is on made-from-scratch food using natural ingredients, some vegetarian and vegan options, plus a list of mocktails. 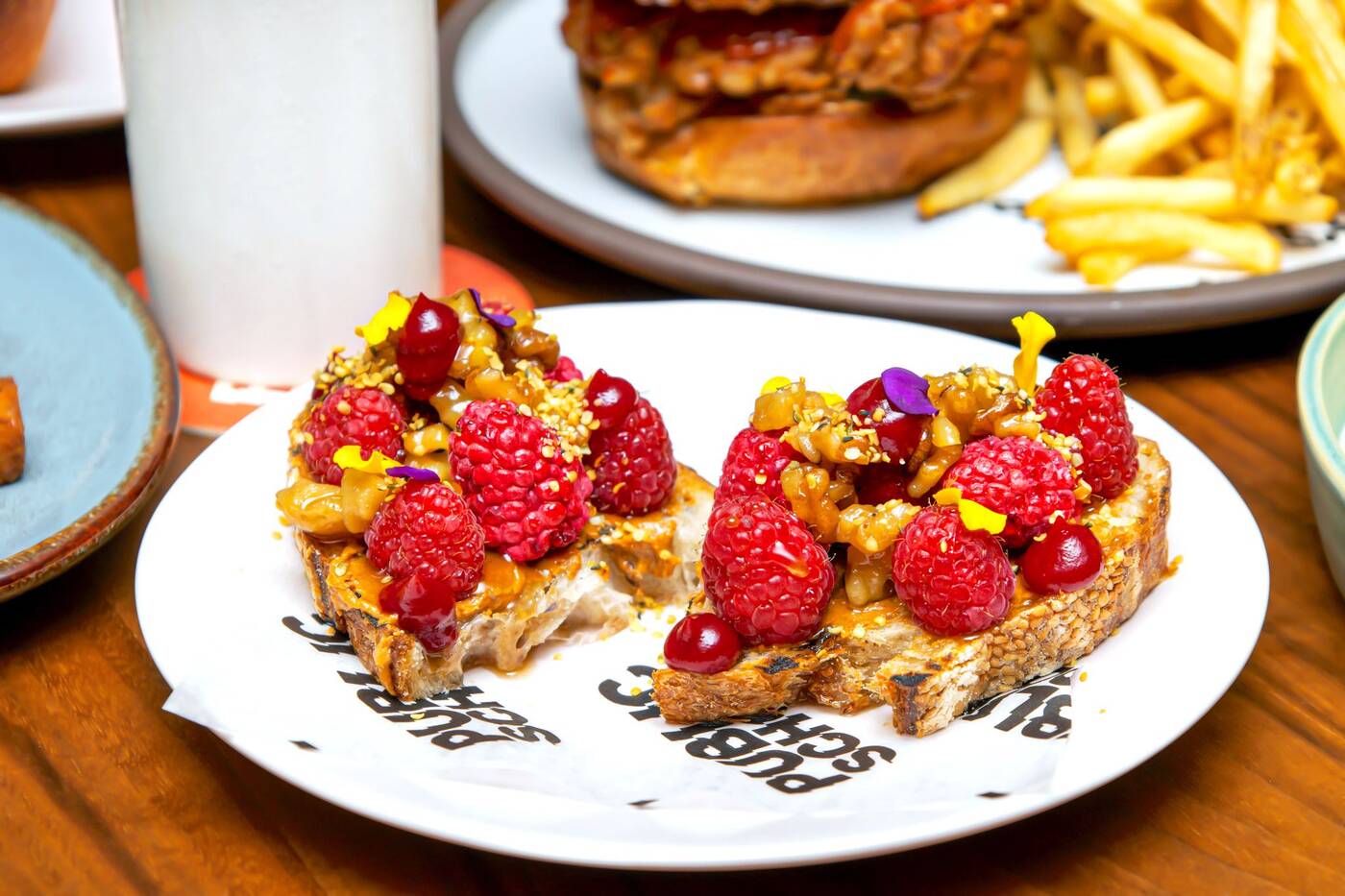 The Sweet Toast ($11.00) was a hit among the the people I was with during our visit to W Hotel Toronto. It's offered on the breakfast menu at PUBLIC School.

Cashew butter is spread across sourdough bread, along with a mixture of raspberries and cranberries that accompany bits of crunchy walnuts.

This adds a nice balance of textures in this dish which to me resembles a more dressed up version of french toast, without all the extra sugar. 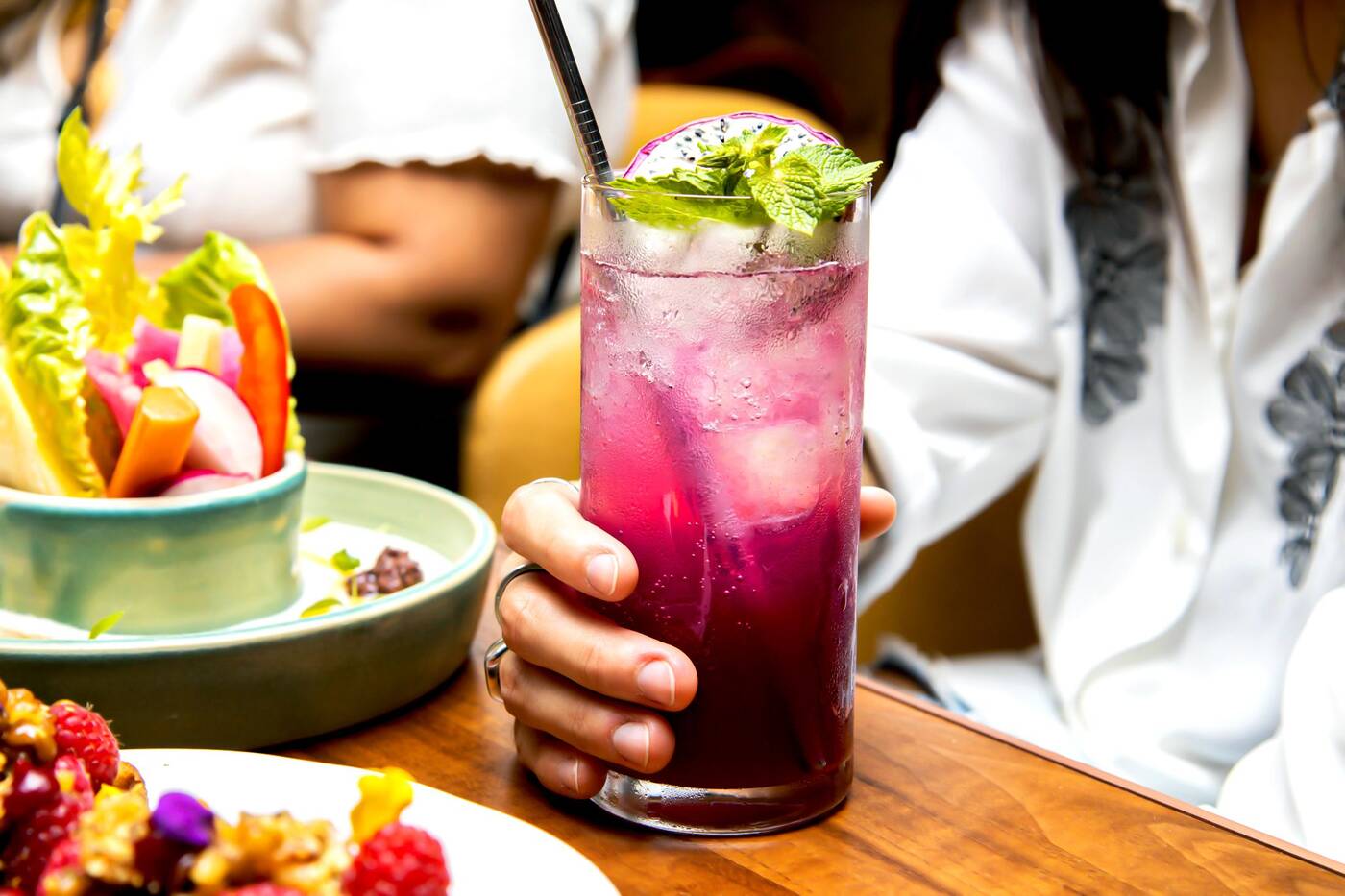 A piece of dehydrated dragon fruit along with a mint sprig are garnished for extra freshness. 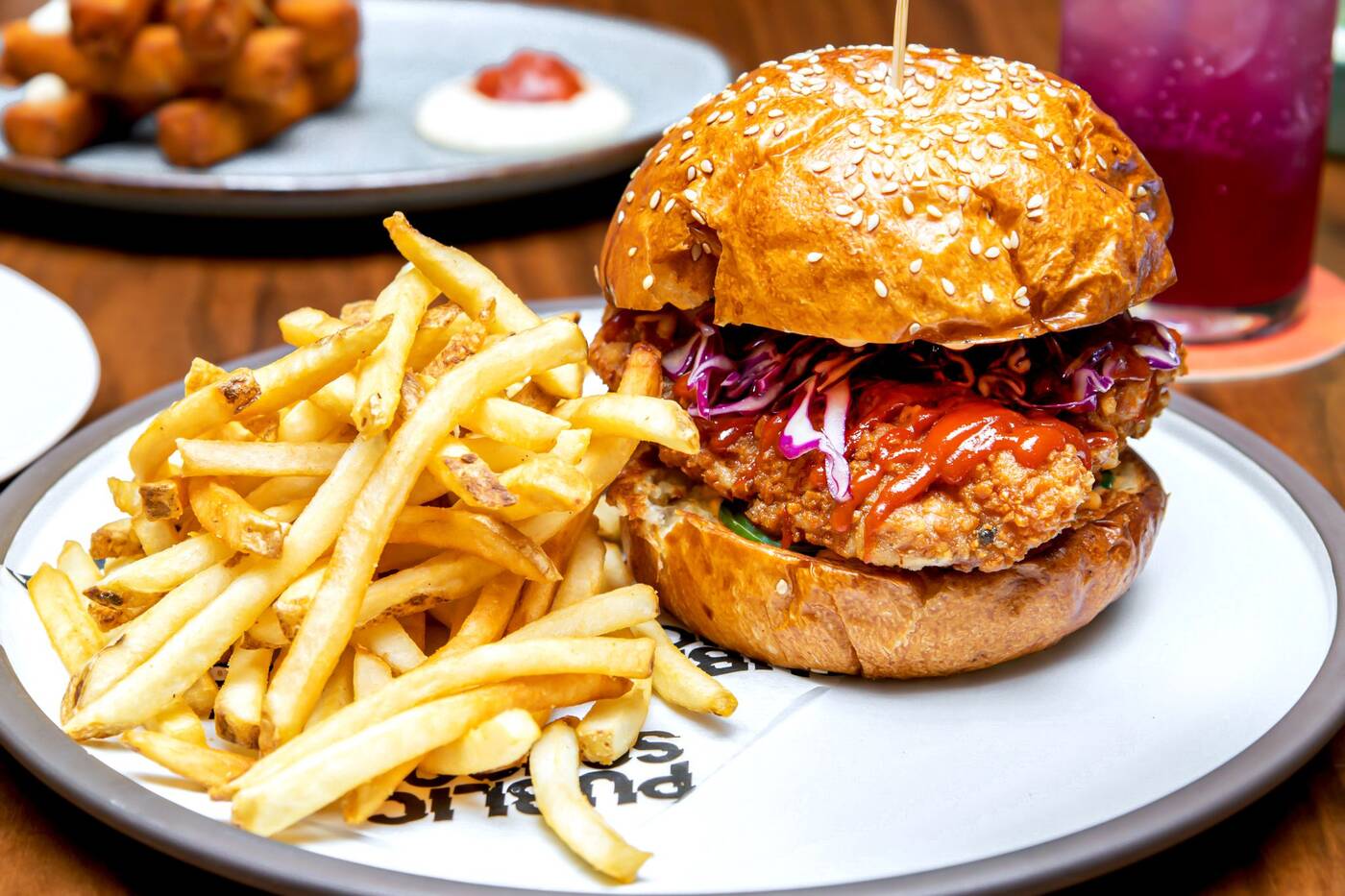 The Korean Fried Chicken on a Bun ($21.00) is a medley of both sweet and salty flavours.

The chicken has a ginger sesame emulsion and is topped with a crunchy red cabbage coleslaw, pickles and citrus garlic aioli. Plus, crispy thin fries served on the side. 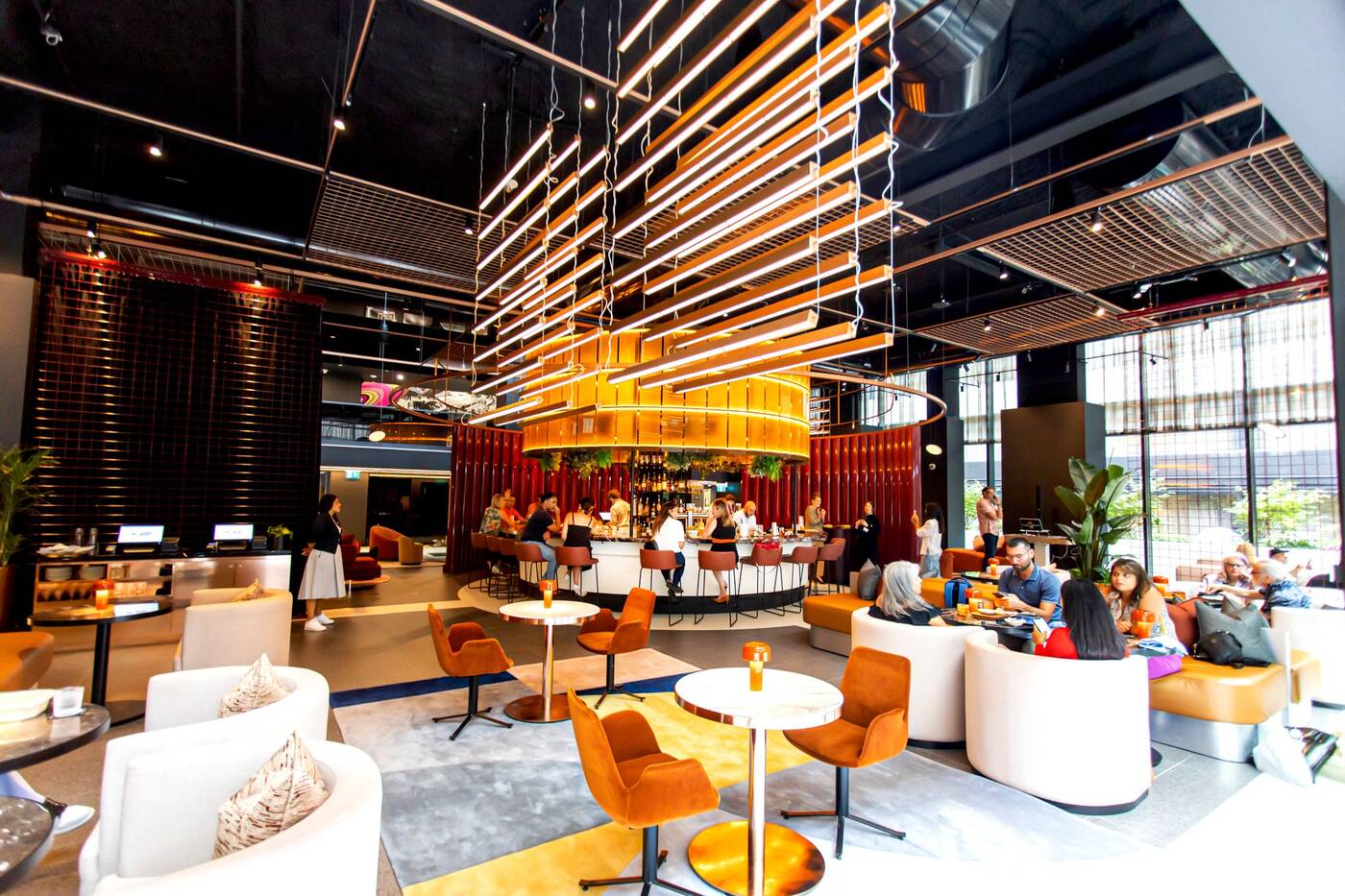 Back up to the Living Room level, behind the front desk you'll find a 5,000 square foot dining space, including a full-spread bar and table-side service.

This is the spot to come in the evening for some Toronto-inspired tapas and cocktails where you'll hear DJs spinning transcending house beats as it gets later in the day. 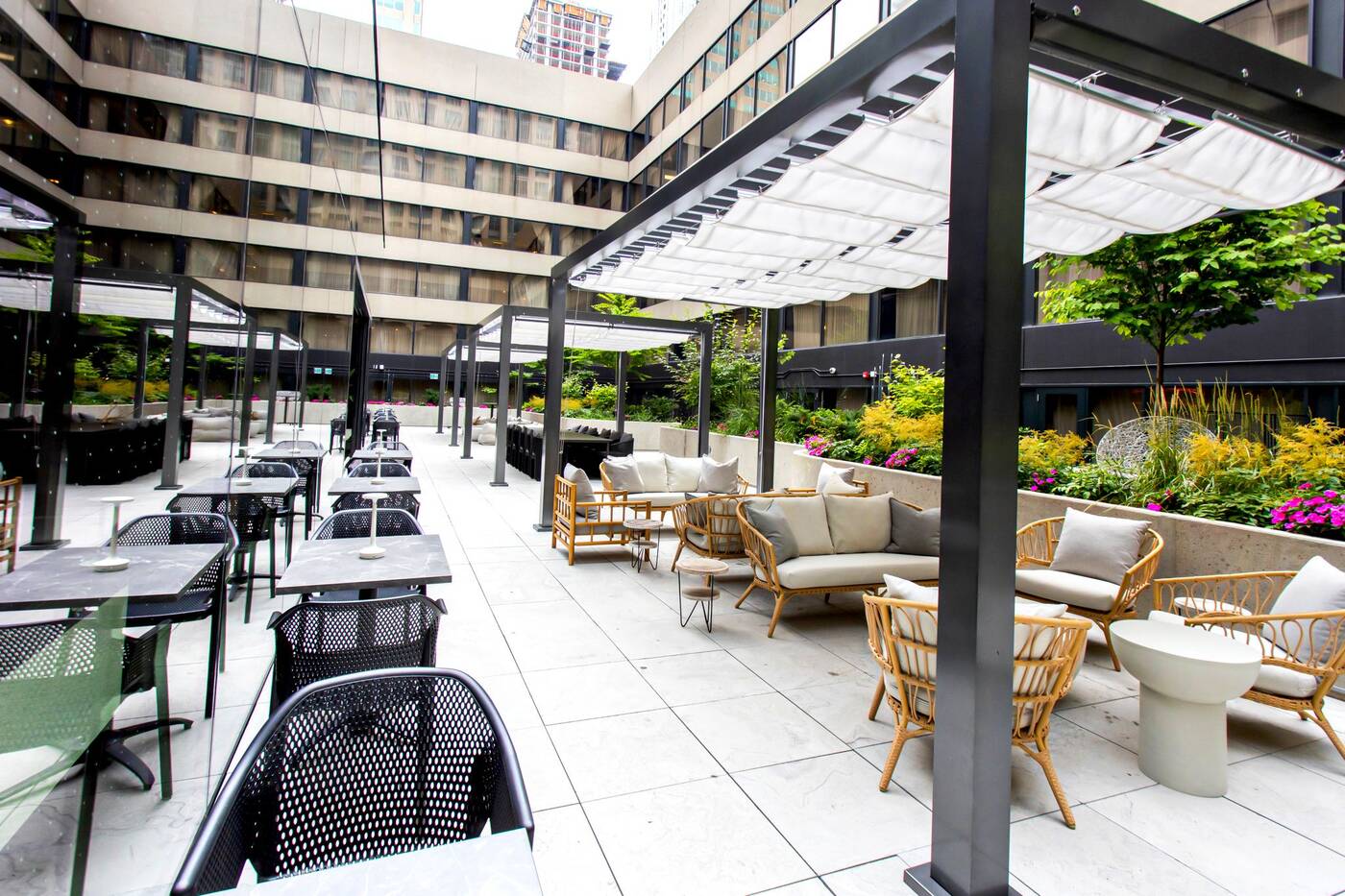 In the summer, a floor to ceiling opening faces an outdoor courtyard with even more seating allowing for a cascade of natural light around the perimeter of the Living Room. 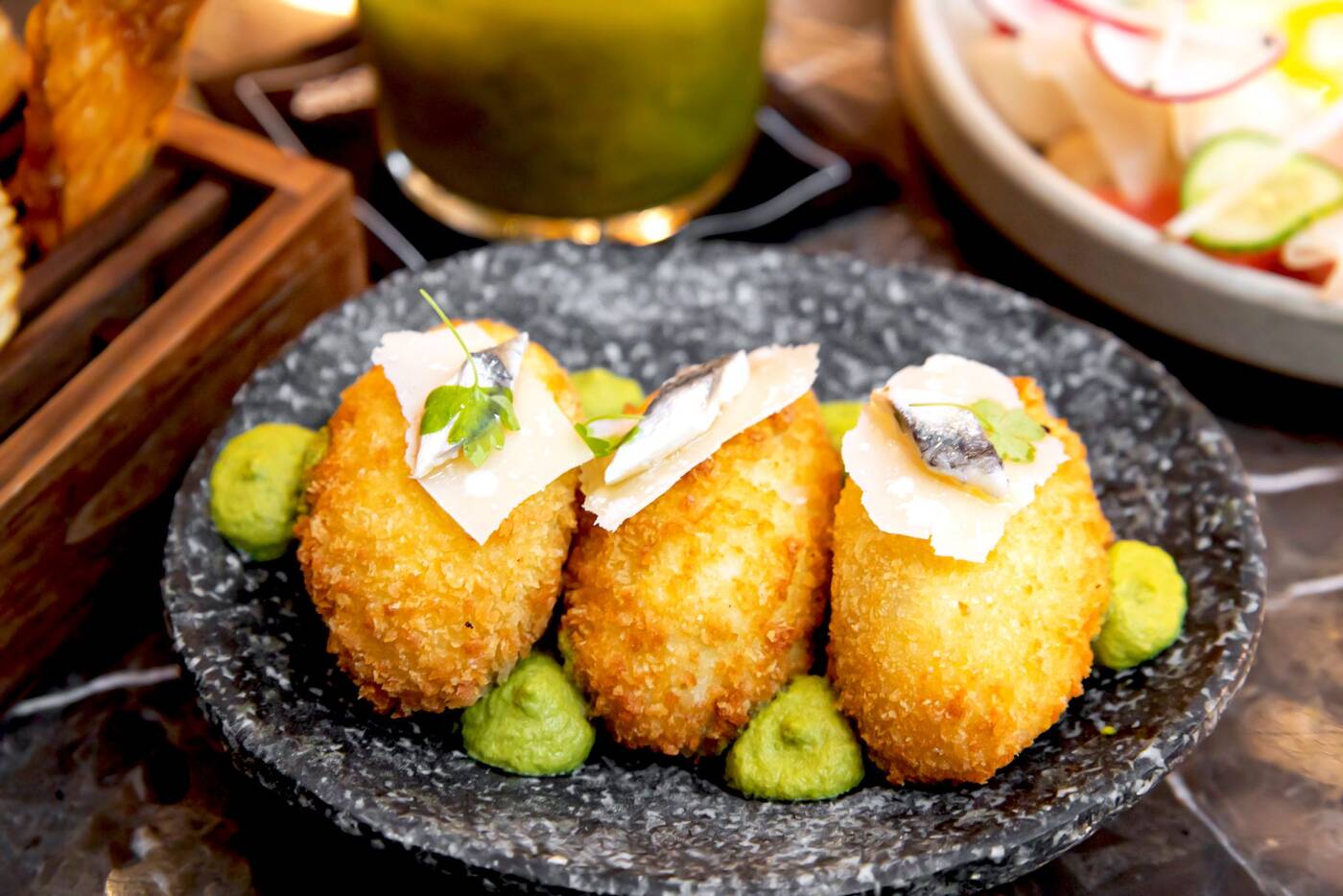 The Cheddar and Potato Croquette ($14.00)  is an ode to Little Italy resembling the taste of a Caesar salad.

Along with the cheddar and potato, a creamy romaine puree is stuffed inside with a garlic and anchovy aioli plus a sliver of Parmesan. 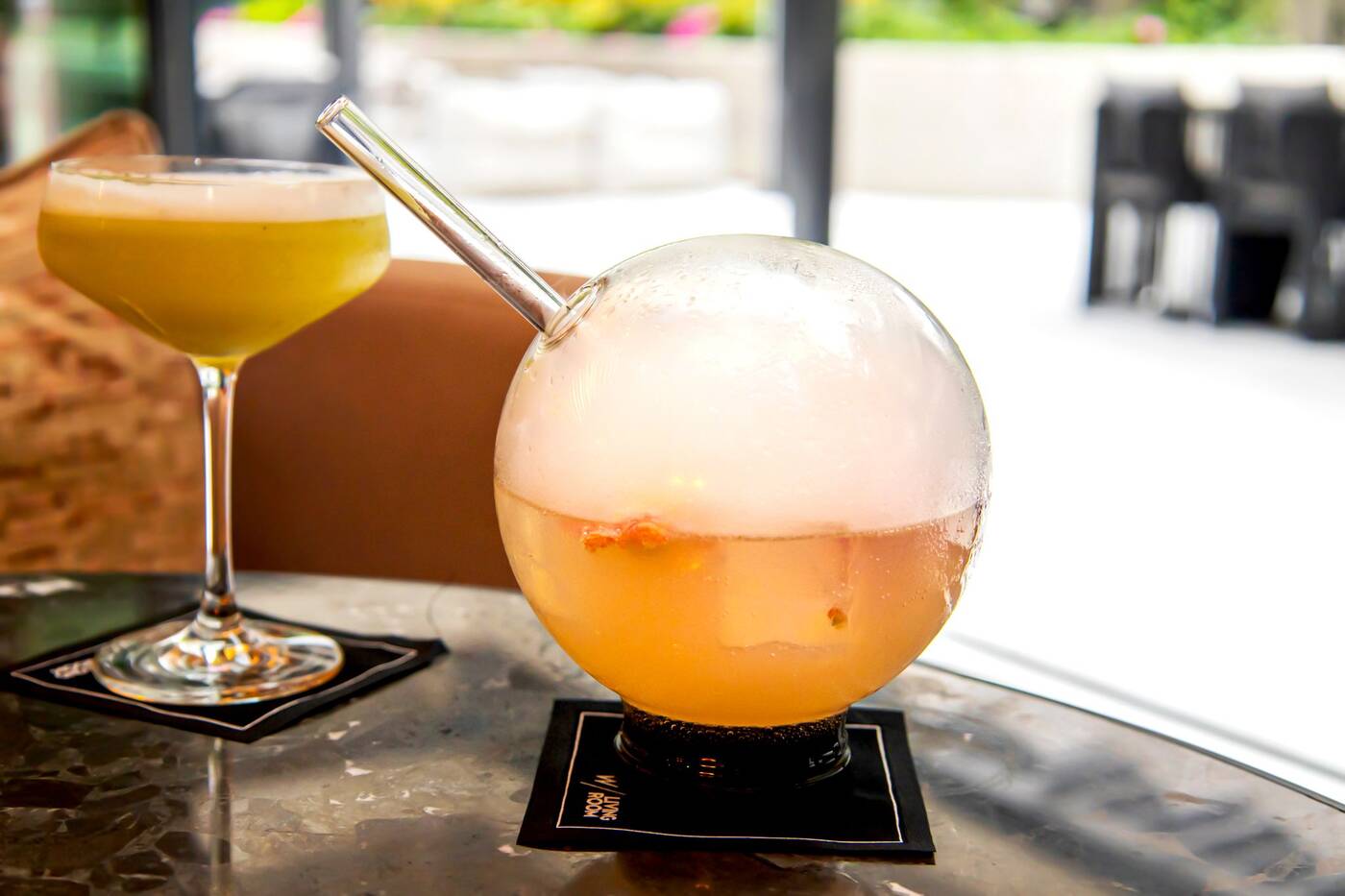 A really cool drink to order here is the Flower Power ($22.00) which comes served in what looks like a fish bowl with smoke pouring out of it.

Grapefruit gin, lavender syrup, and lemon are combined then splashes of Prosecco adding a fizzy finish to this fruity drink. 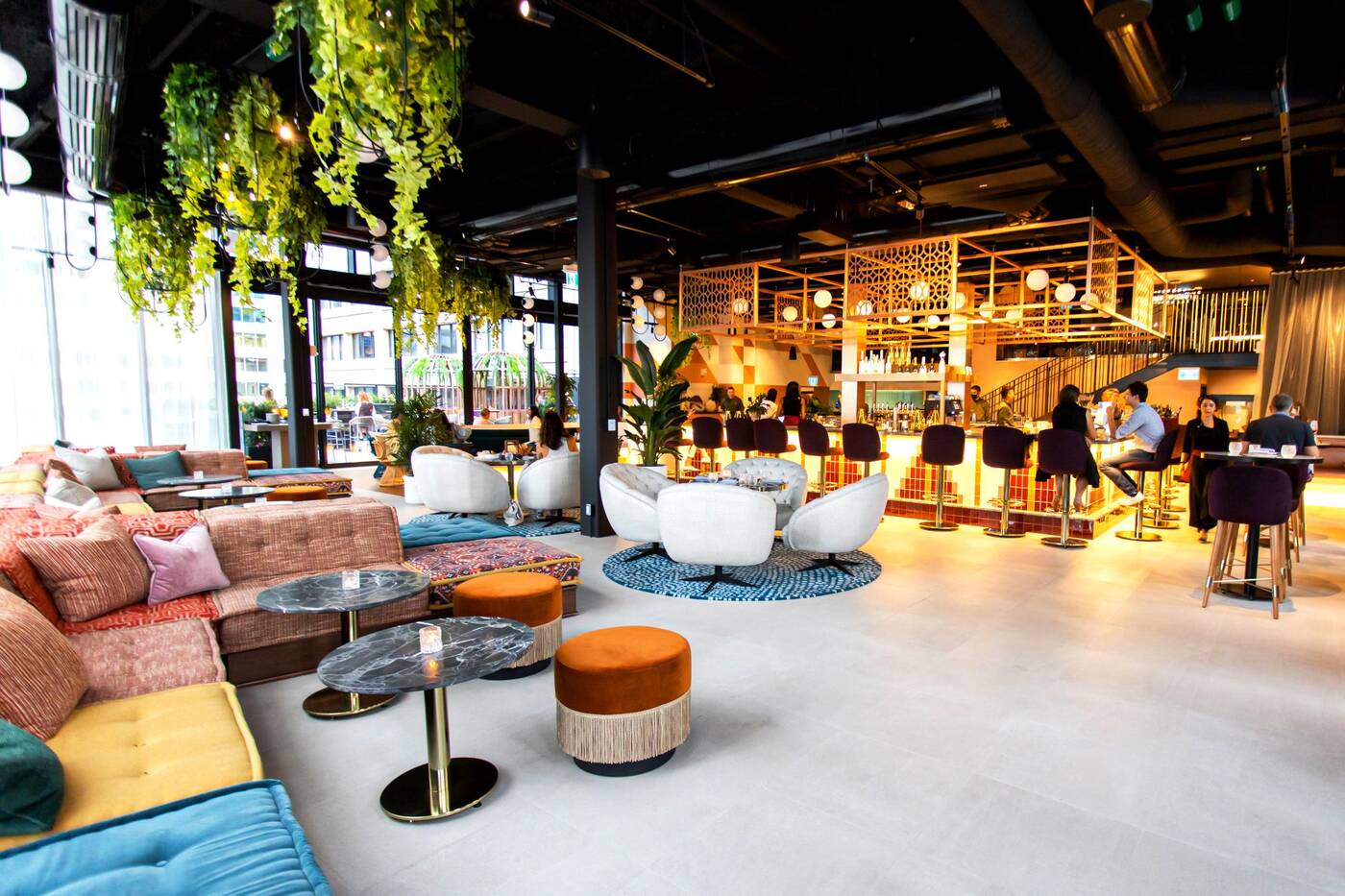 The third and final dining level at W Toronto is the Skylight rooftop, which I believe deserves a medal for overall design, an approachable menu full of Mediterranean dishes, and amazing city views. 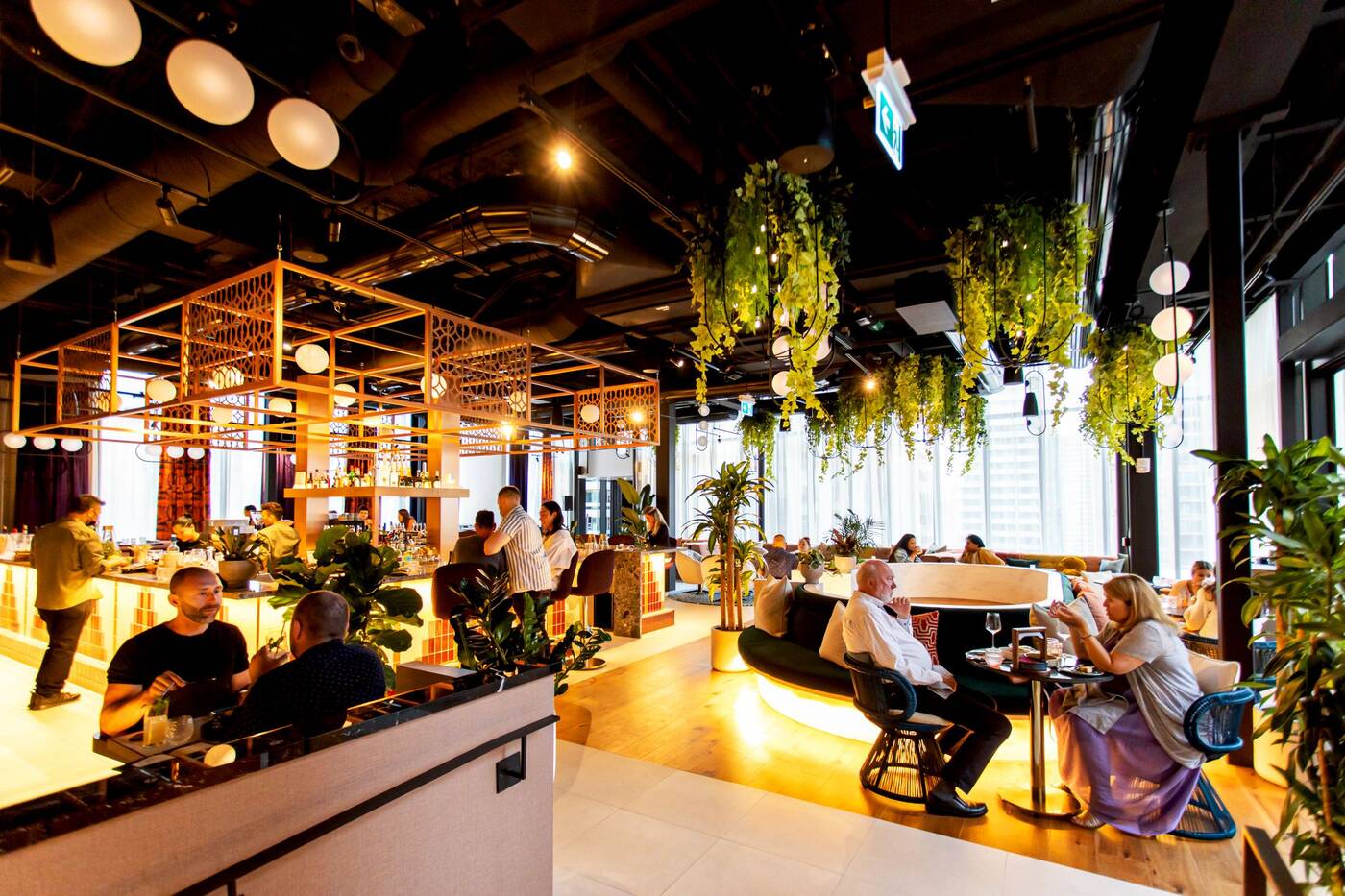 Skylight is an enchanting oasis, adorned with greenery peeking out of every corner, colourful cushions for seating on the far side, and an overall golden hue to the space which makes it inviting. 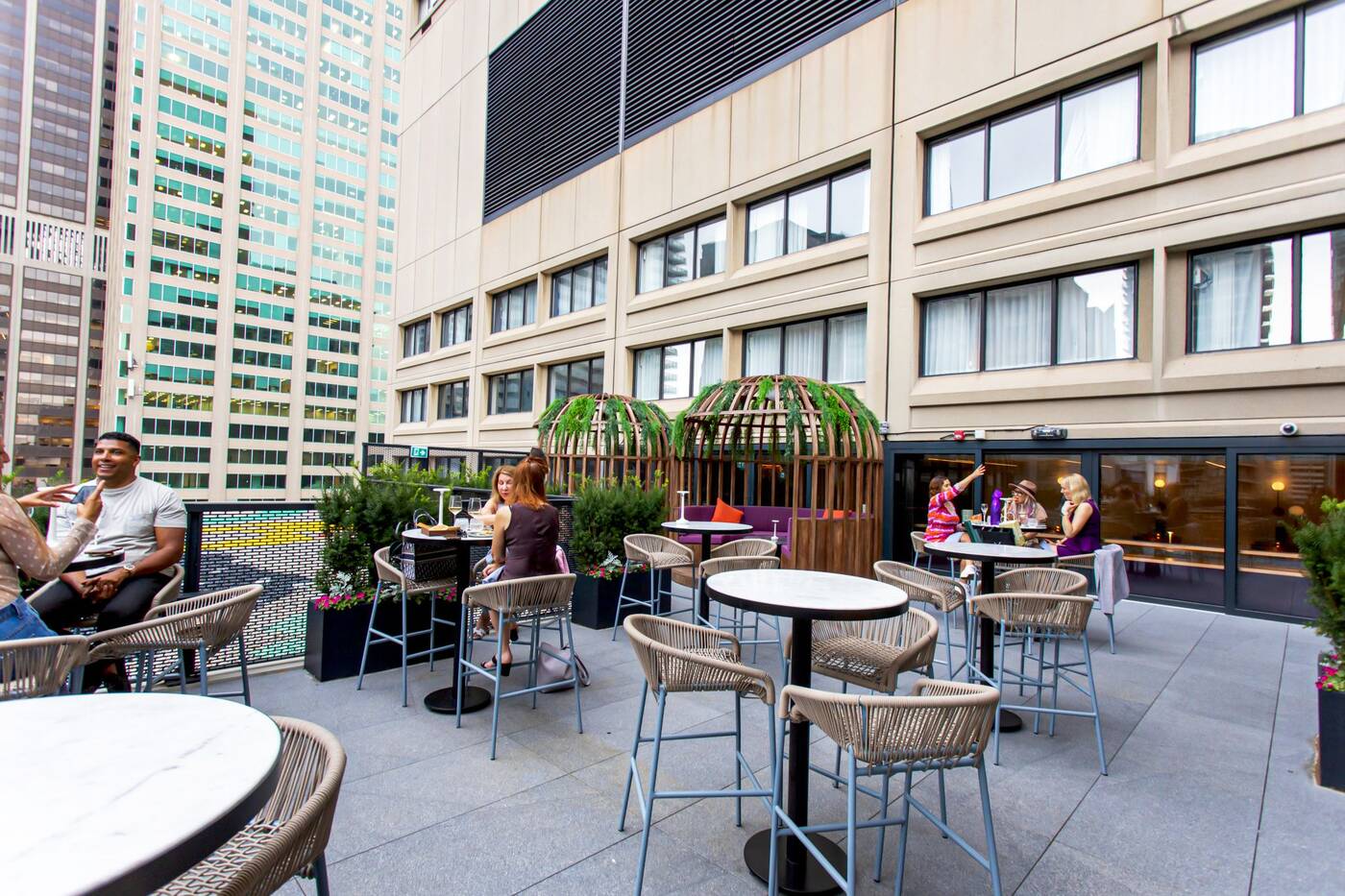 The outdoor area on the rooftop feels like you're sitting in the heart of a buzzing metropolis, surrounded by sky high buildings that line Bloor Street East. Make your choice between a high top table or a booth. 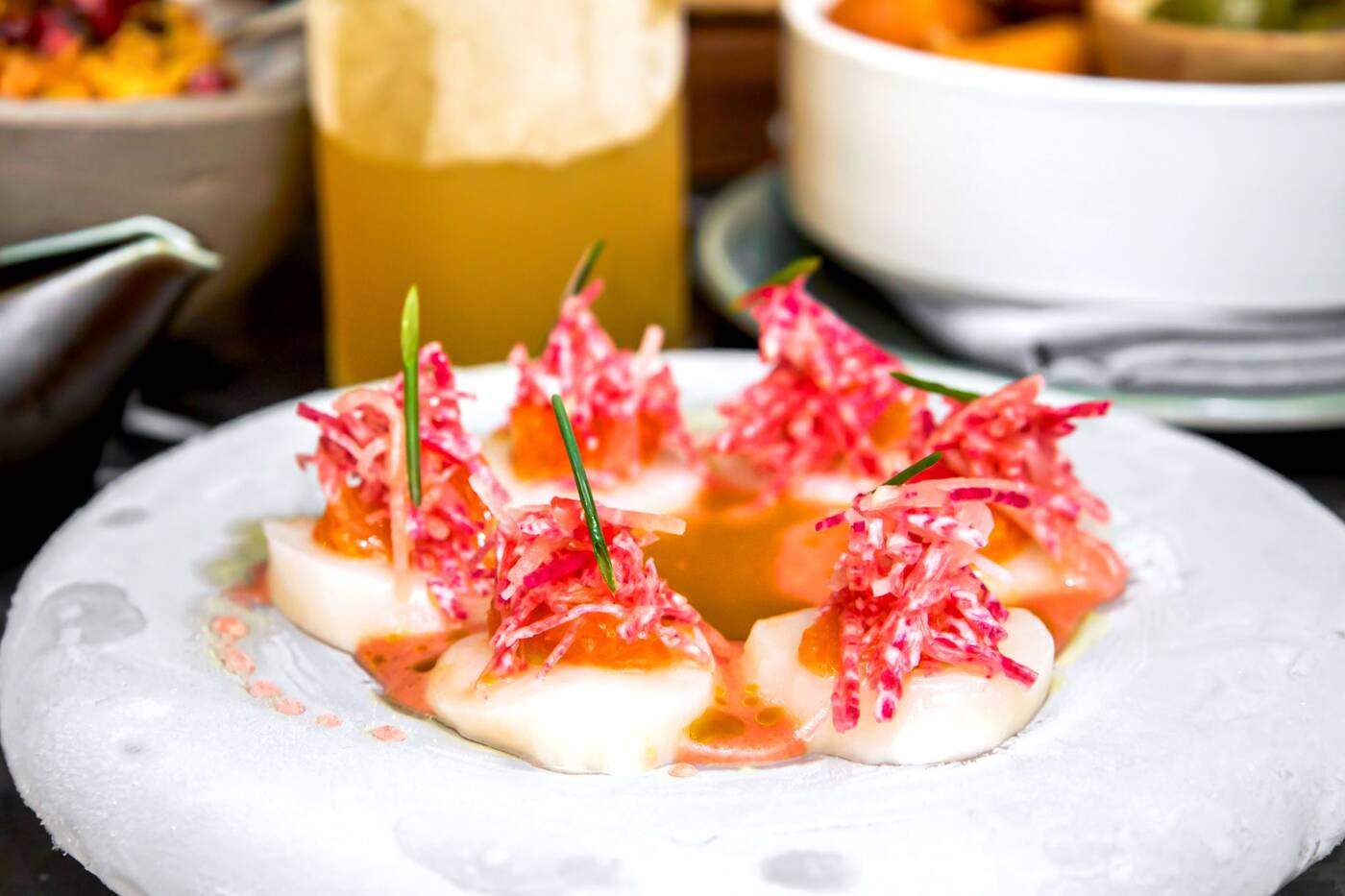 Along with their Mediterranean options, Skylight has a raw bar serving dishes such as the Scallop Crudo ($26.00) that comes on an ice plate to keep the food crisp and cool tasting.

Six pieces of juicy scallop are garnished with Daikon, a Japanese radish. Each piece soaks in citrus-olive oil blend with green onion for extra flavour. 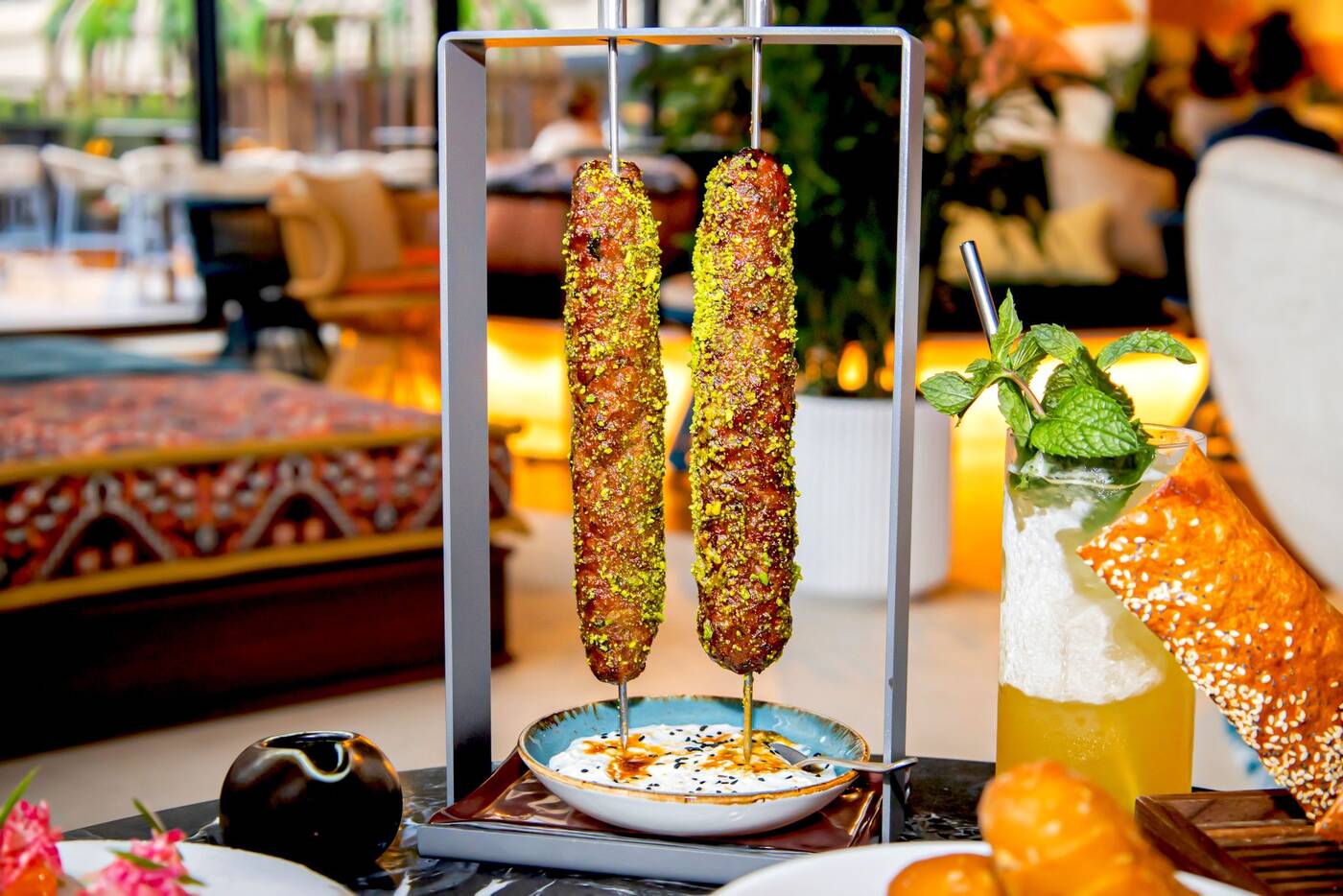 From the grill part of the menu, comes their delicious Beef Skewers ($25.00) which pairs nicely with Saffron Sultana rice or any of the fresh salads.

The beef is rolled in a pomegranate molasses, then a covering of pistachios, adding some dimension to an otherwise plain dish.

The meat arrives at the table on the skewer sticks allowing for its juice to drip down into the tzatziki sauce at the bottom made for dipping into as you eat. 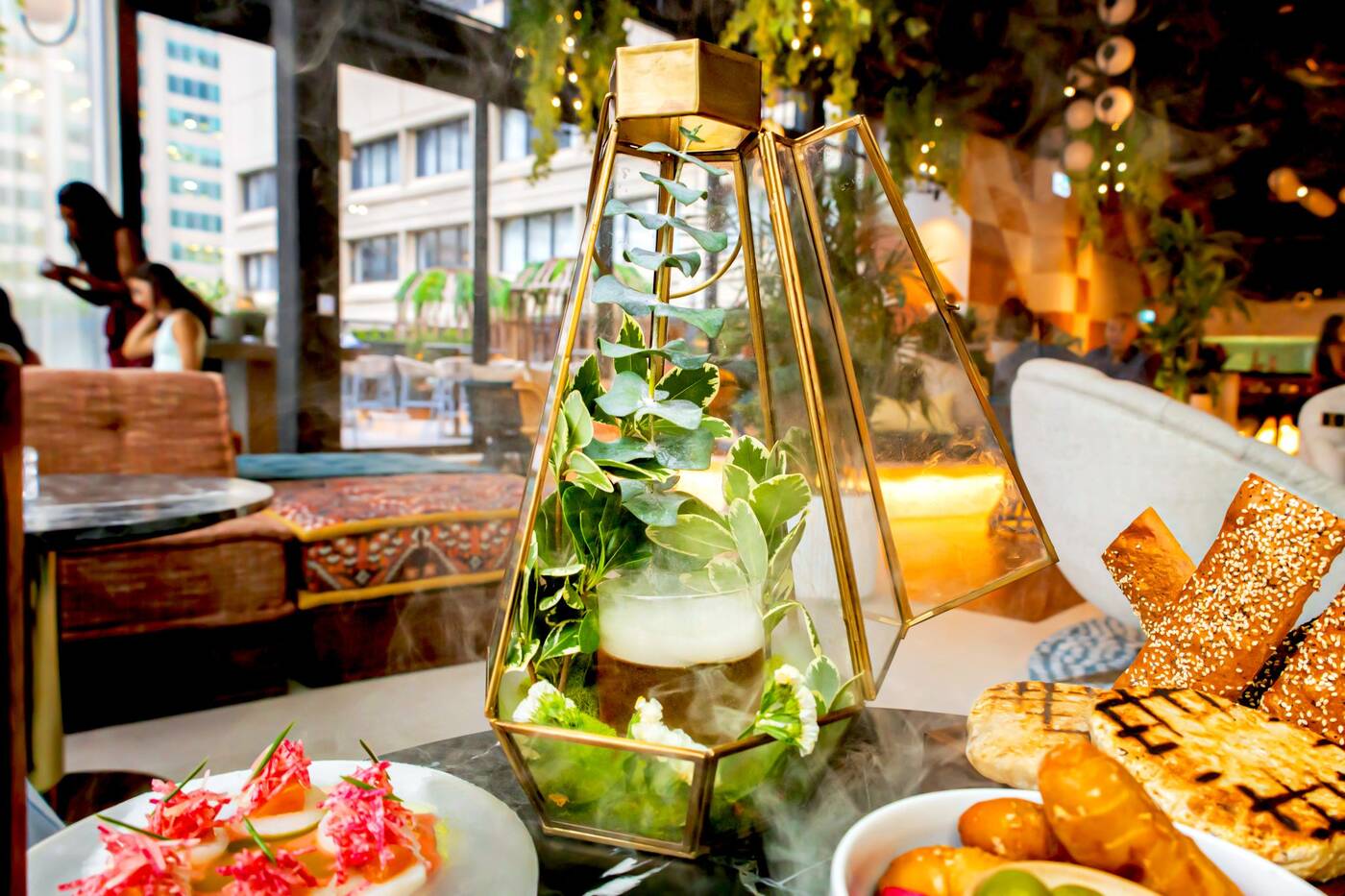 The most impressive cocktail on the menu at Skylight is the Quicksand ($34.00) which comes to the table inside of a glass terrarium with real plants inside.

Smoke pours out of the glass door when opened to reveal a drink made with Buffalo Trace Bourbon, mixed with Cynar Amaro and Amaro Lago Maggiore.

Demerara Syrup, adds a caramel flavour which goes nicely with the hints of sweetness from the Dalgona Coffee and Manuka Honey Crystal. 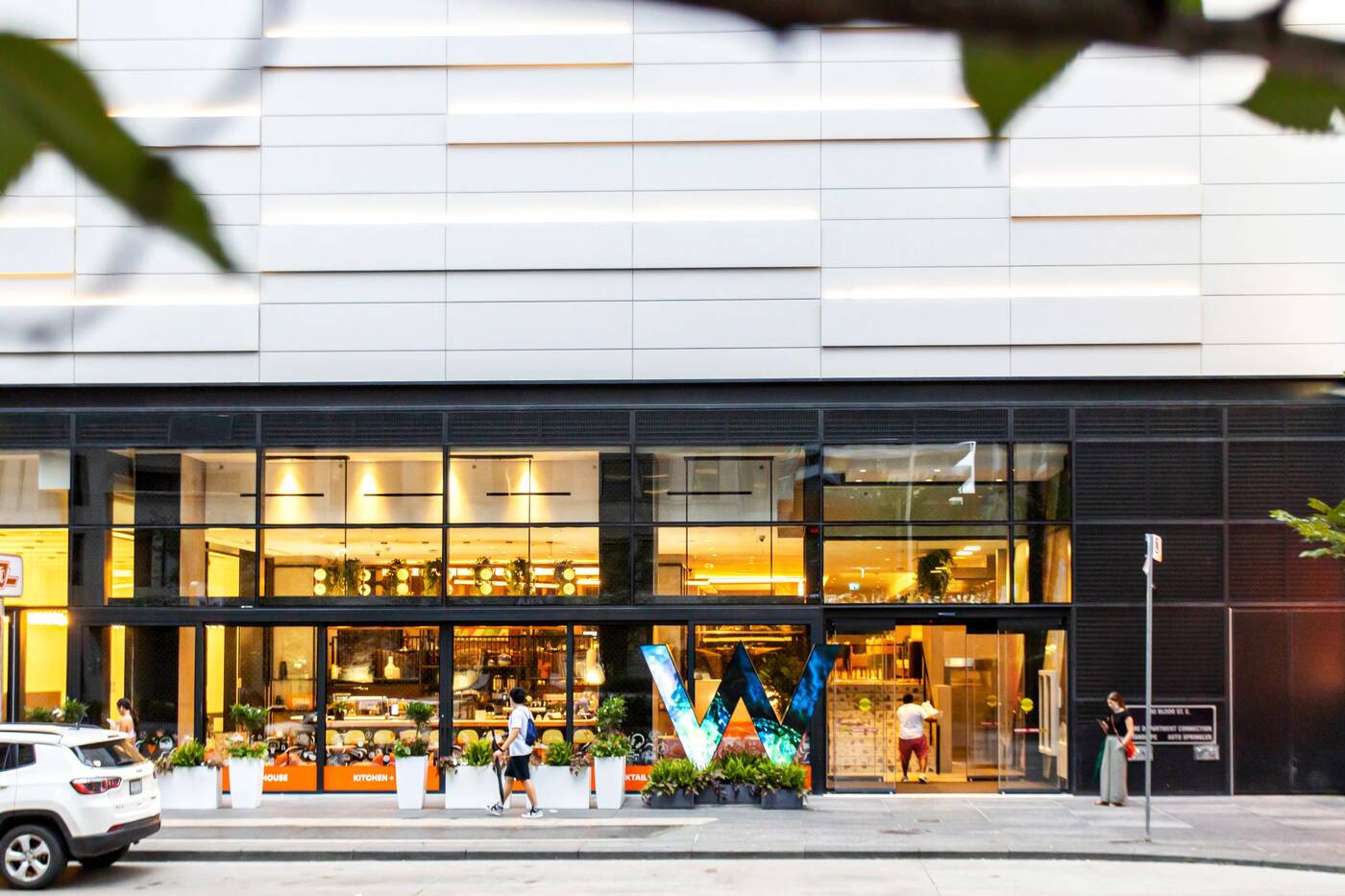 Back at the ground level, you'll see a large colourful "W" out front of the hotel, letting those staying here from outside of the city know they're in the right spot.