With hotels in other cities Kyoto, Seattle, and New York City, this Toronto location is the first time the Ace brand is venturing into Canada. 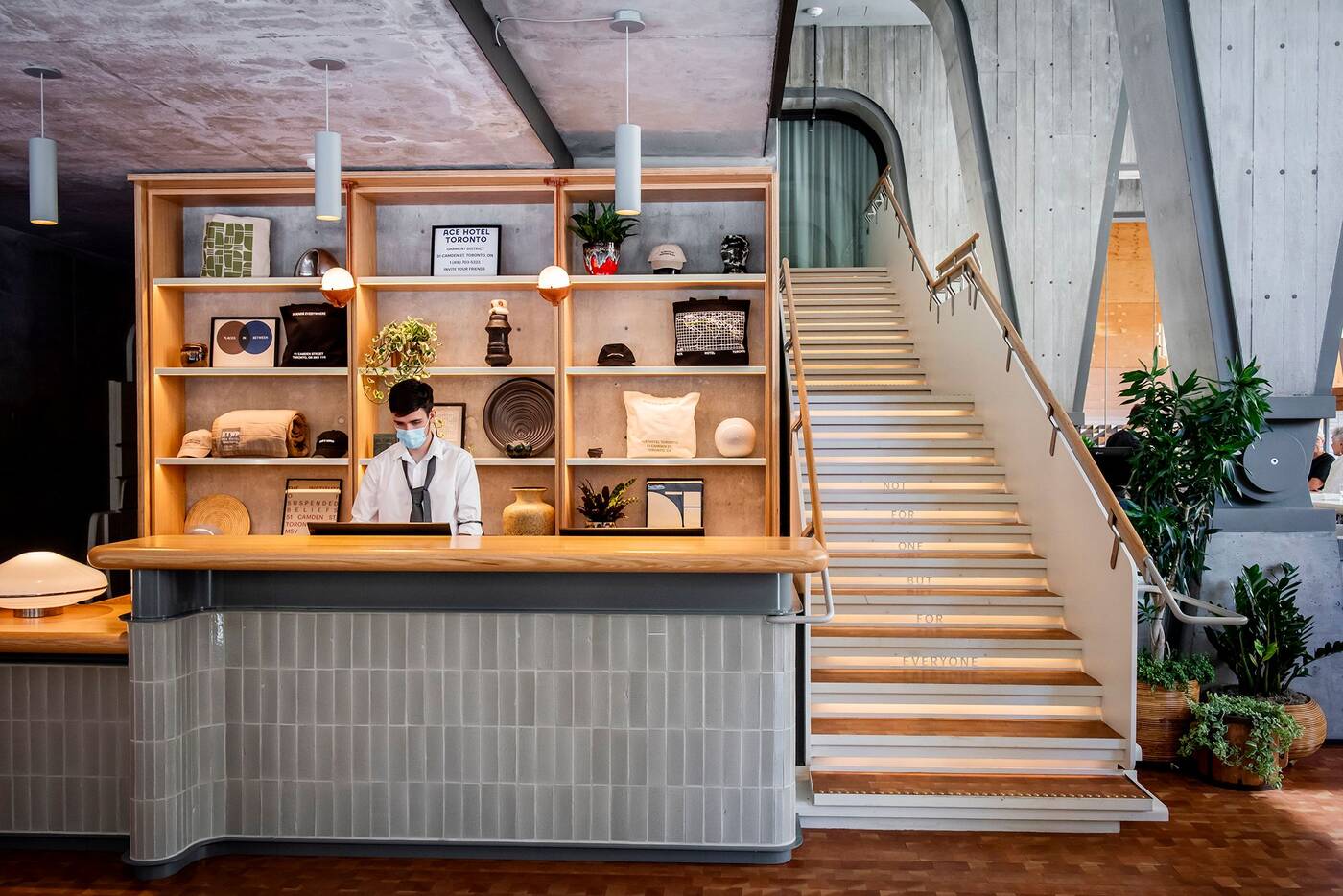 The first thing I noticed was the main entrance's set of revolving doors that are fashioned with the feel of a traditional hotel.

Instead of being greeted by a grand lobby, there's a path to the main desk that's separated from the lobby's bar that feels like a semi-private entrance. 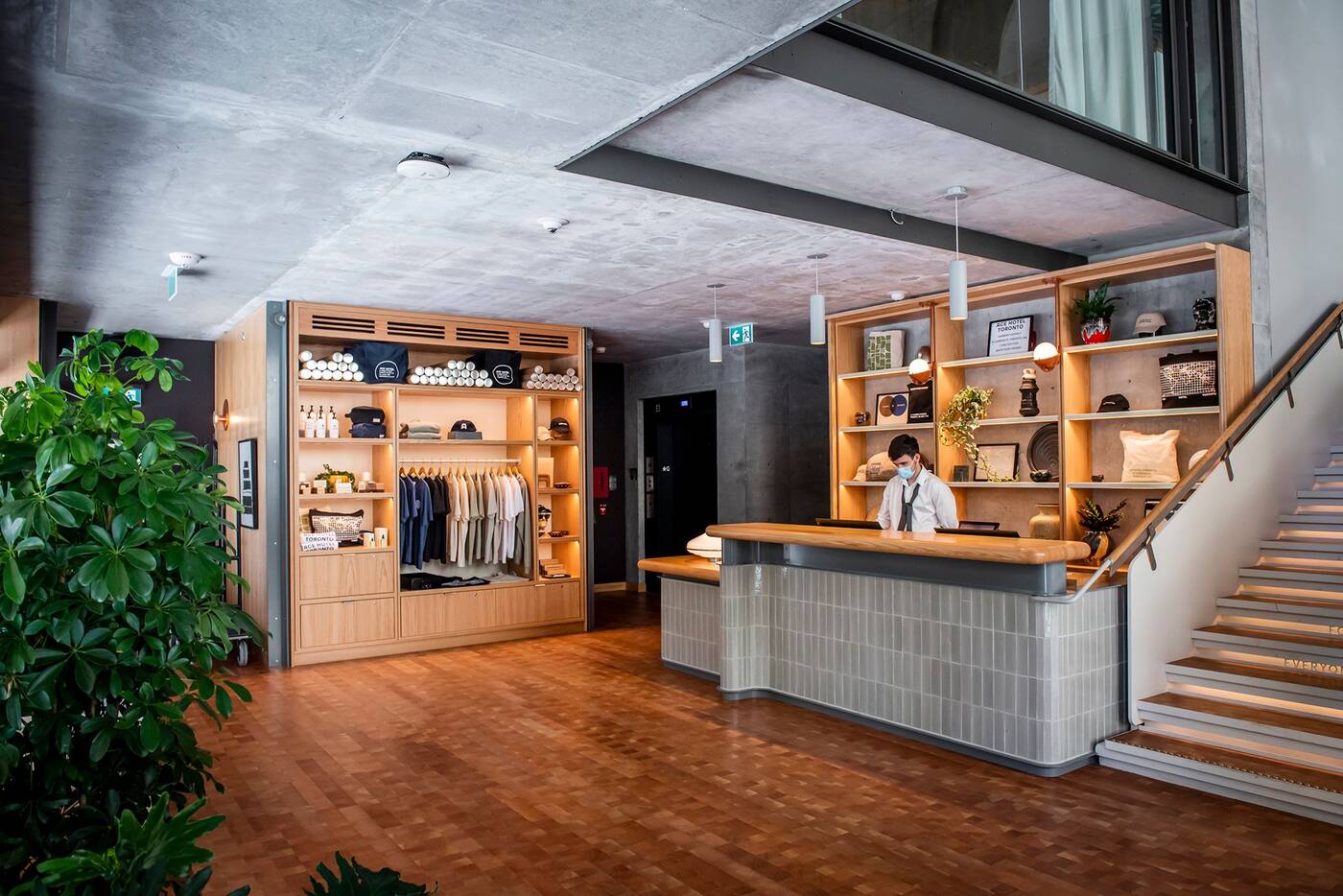 The check-in desk is situated next to a shelving unit that displays Ace branded clothing, full sizes of the hotel's toiletries, and other goodies from local businesses around Toronto for purchase.

Ace Hotel has a variety of rooms that are categorized by size names (think, Small to Large). There's an accessible room option, plus two different suite-style units. 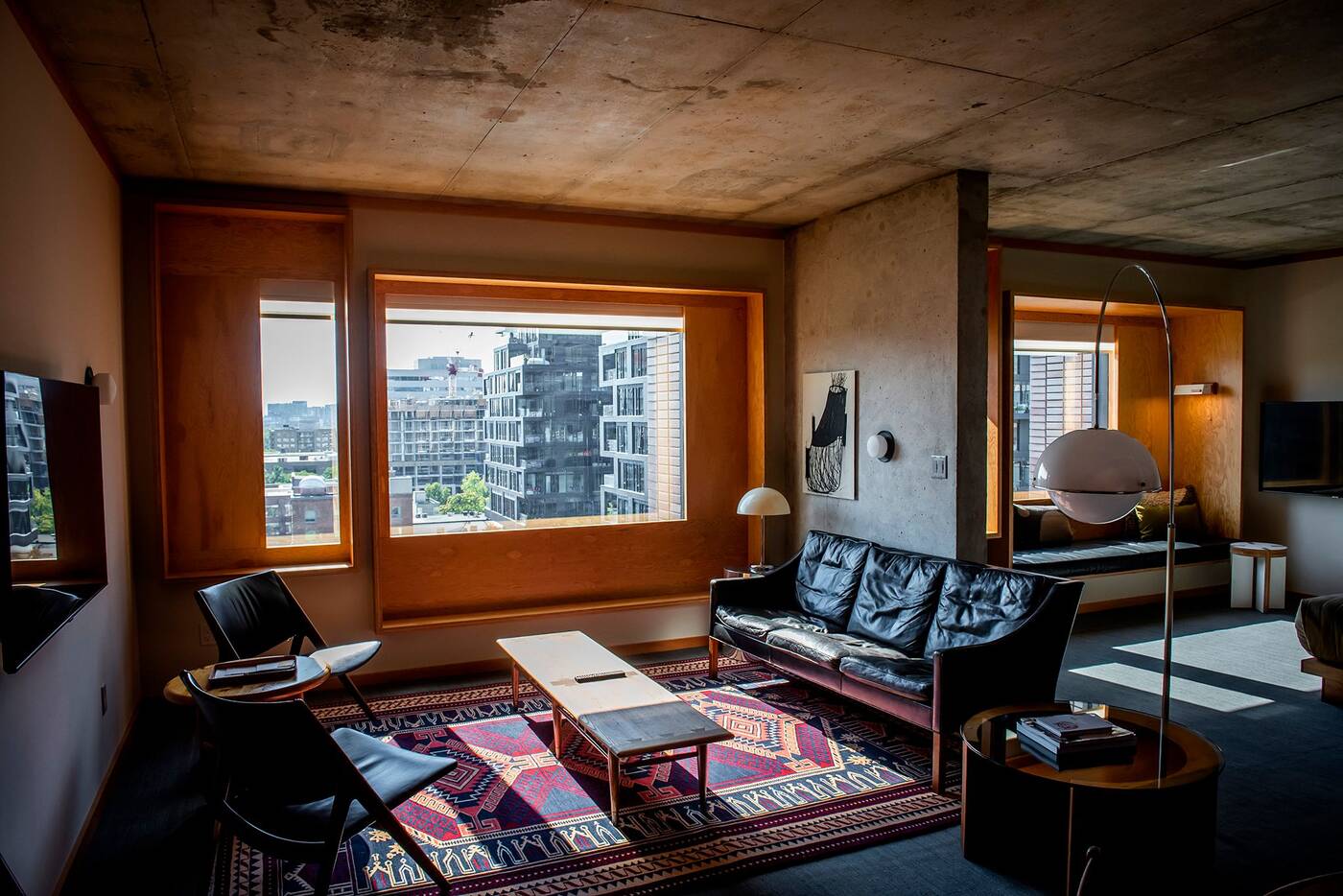 The hotel was designed by two of Canada's most celebrated architects Shim-Sutcliffe, with the interiors and guest rooms created in collaboration with the inhouse team at Atelier Ace. 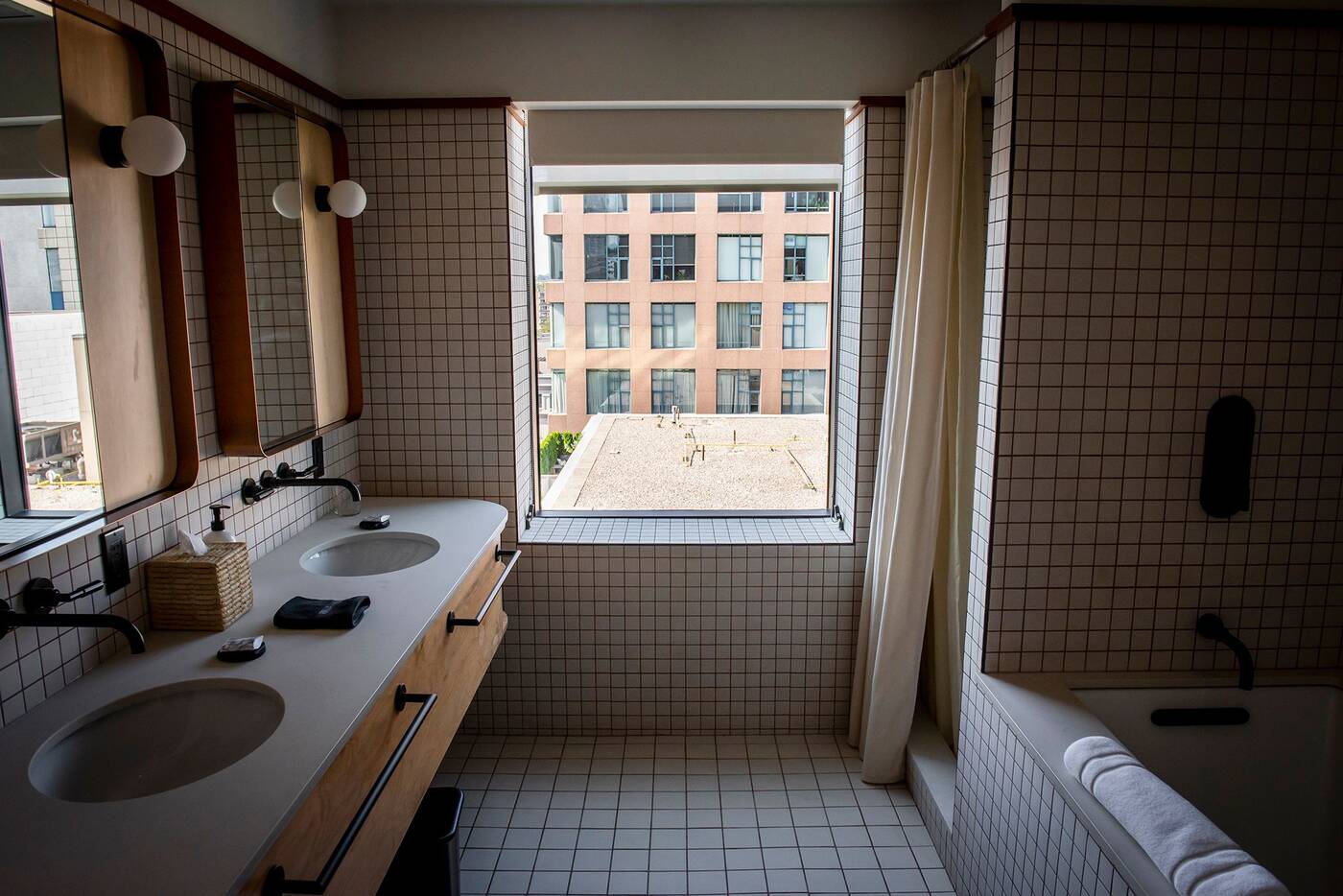 Each suite is modelled after an urban cabin with elements of Douglas fir panelling and concrete ceilings that frame the room.

The rooms also have copper accents and custom-made Shim-Sutcliffe lighting that are strategically placed with functionality in mind. 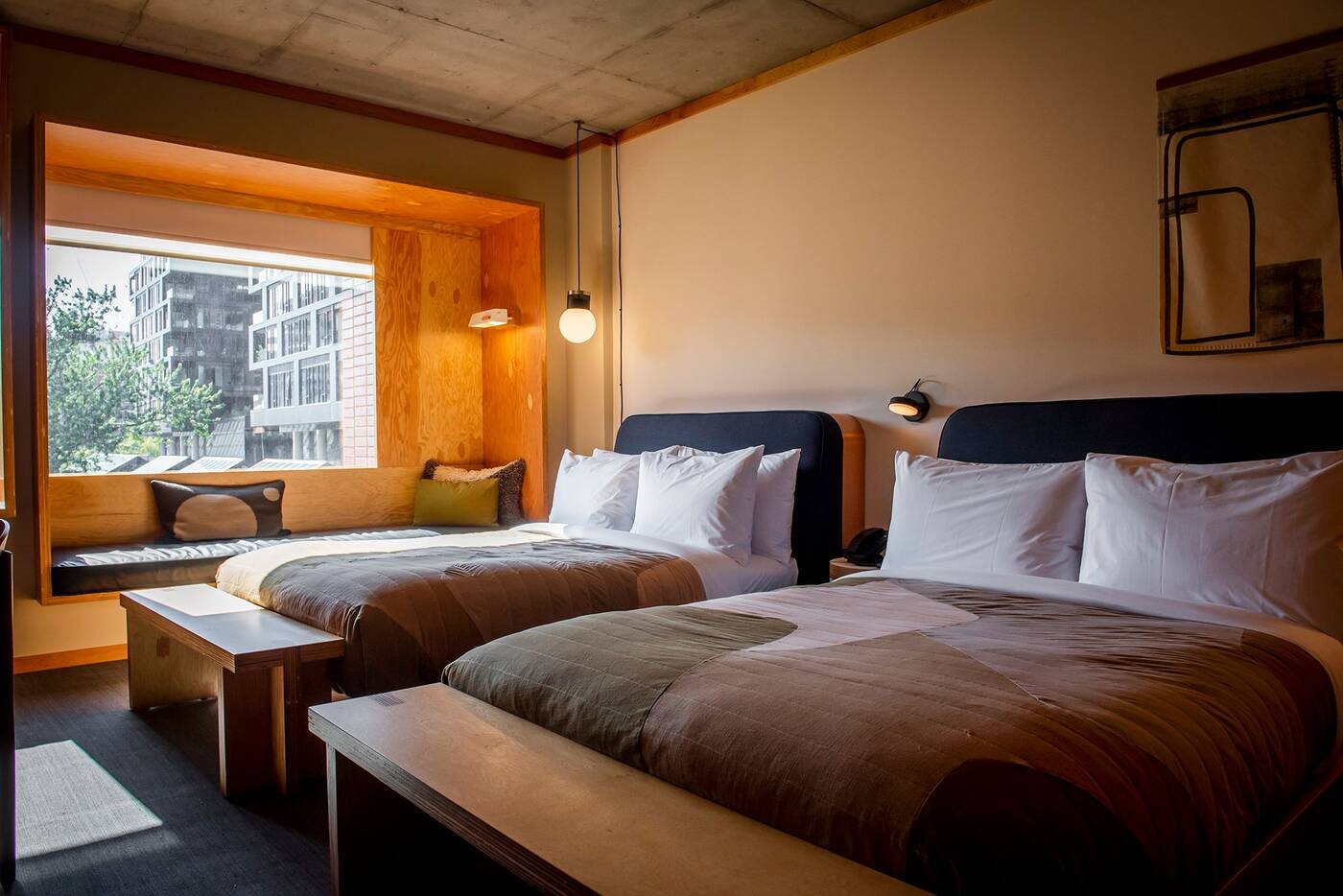 I checked out the Double Double room (starting at $459). It's a 355-square-foot space that has views of the city and St. Andrew's Playground.

The room is outfitted with two double beds, a four-piece bathroom, a working desk, and a window bench that feels like you're suspending yourself above the surrounding outdoor views.

Other notable features include a custom Tivoli sound system and high-definition TV where you can cast your own shows and movies.

A minibar is also included with snacks and drinks from local businesses around Ontario, such as Dillon's Small Batch Distillers in Beamsville and Comeback Snacks from Hamilton. 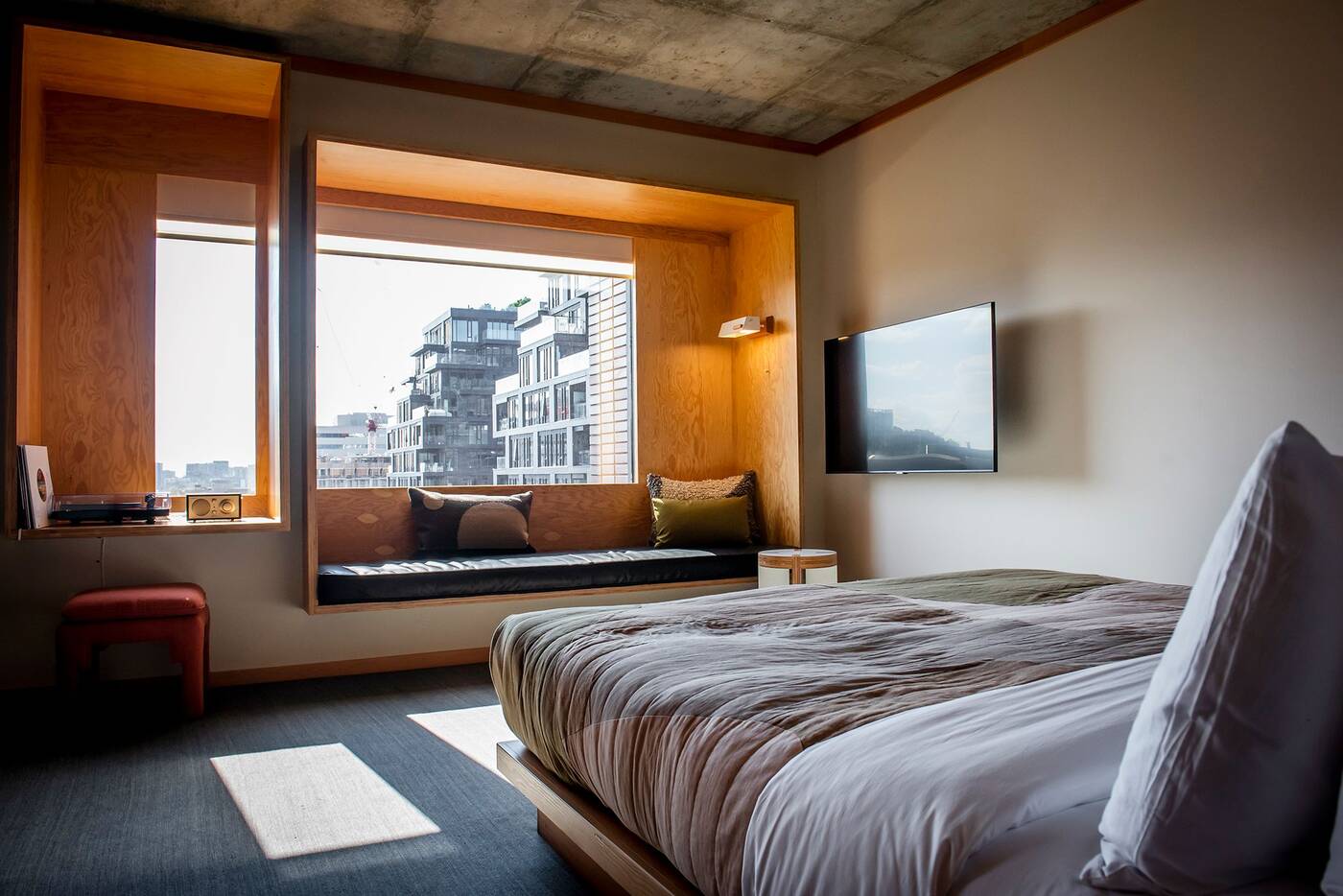 For the ultra-fancy, there's the Ace Suite (starting at $1500). It's a 716 square feet corner unit that has a king-size bed, a jumbo shower and double sinks. 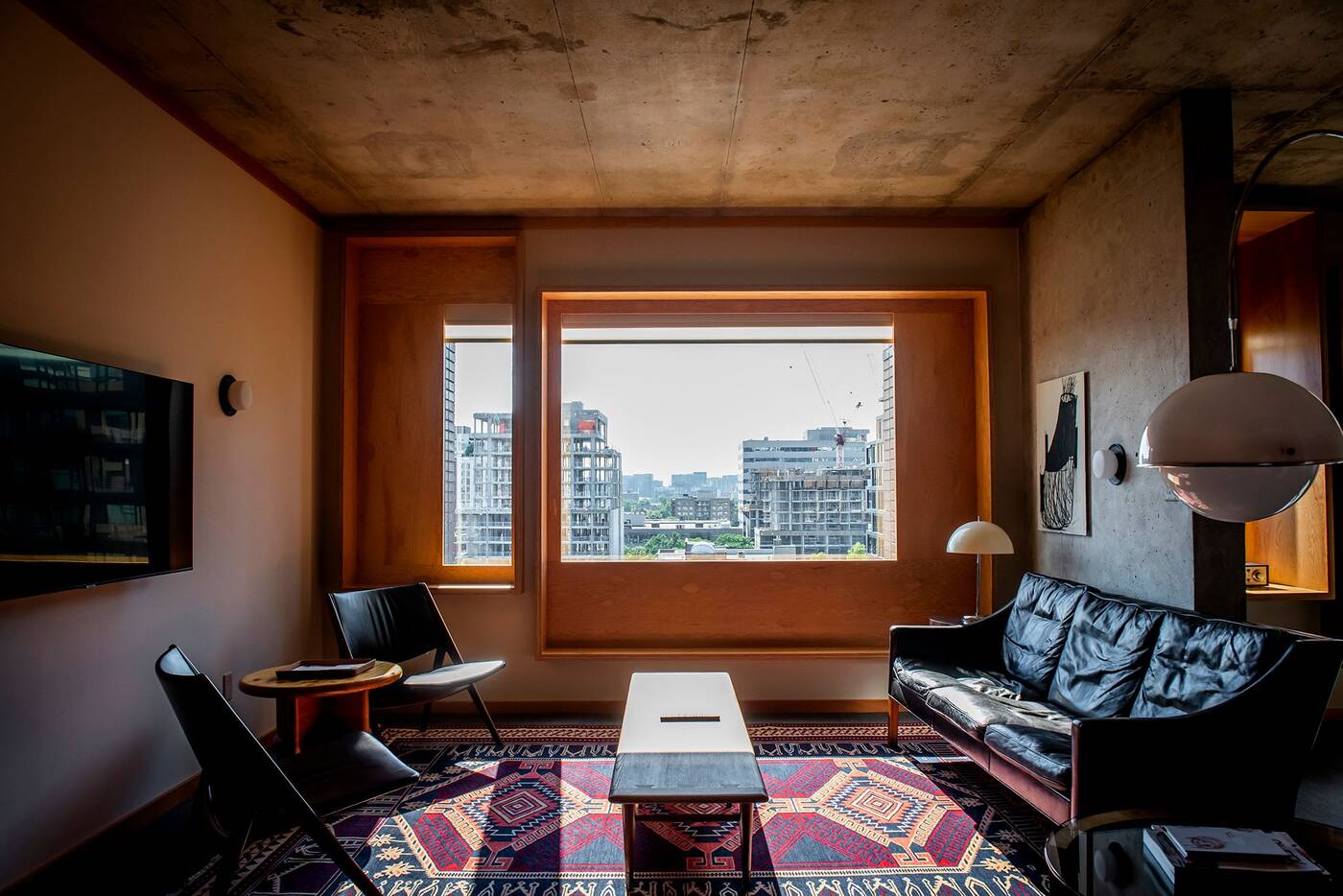 There's an open living room area with a black leather couch, an assortment of coffee tables, and chairs for additional seating.

Besides a classical guitar, the eclectic meeting space has a picture window with city views. 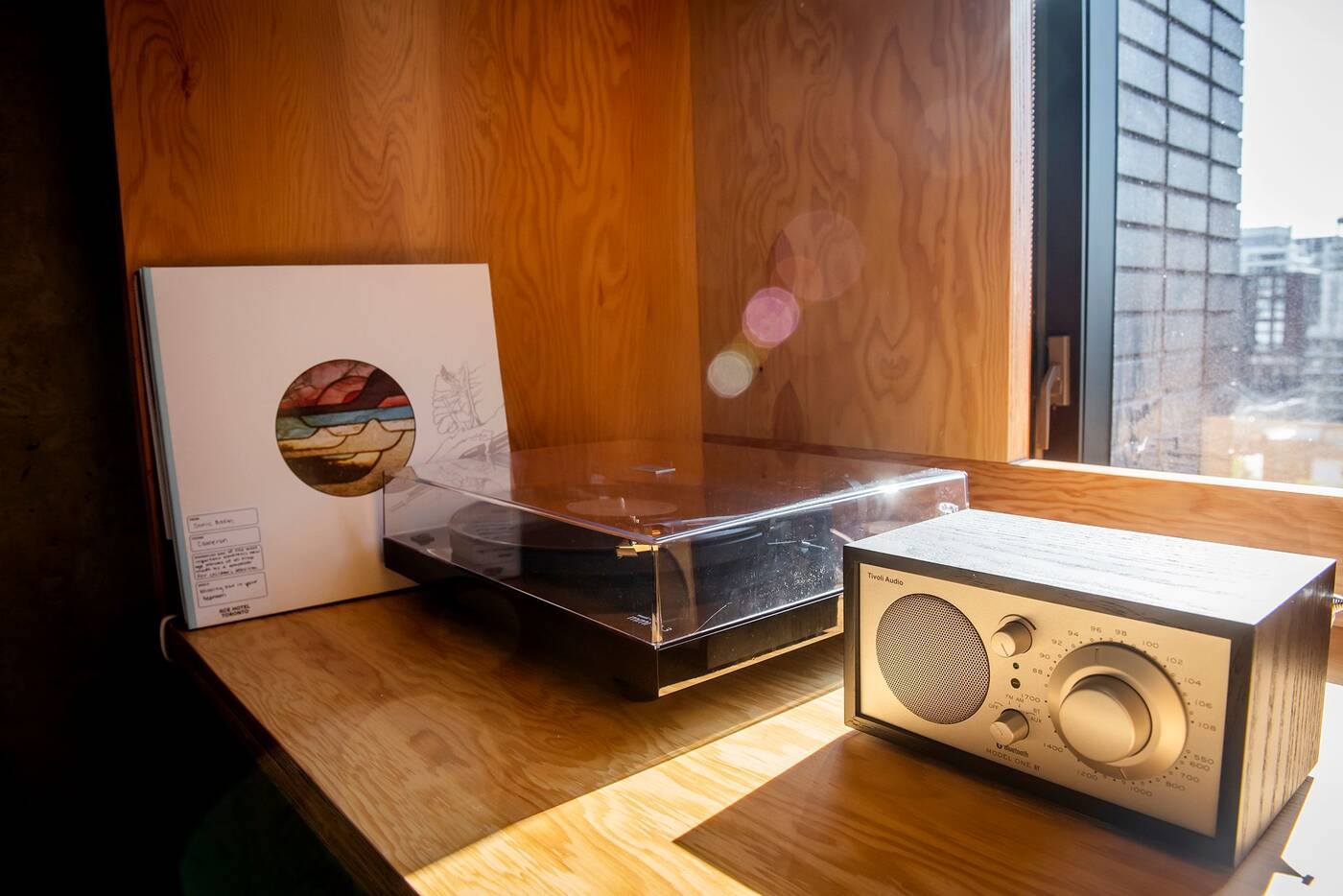 You also have a small kitchenette in conjunction with a minibar, plus a private wet bar with a choice of premium alcohol.

One of the most unique features at the Ace Toronto is how various rooms are equipped with a Music Hall record player, along with several easy-listening records by Canadian artists selected by Toronto label Arts & Crafts. 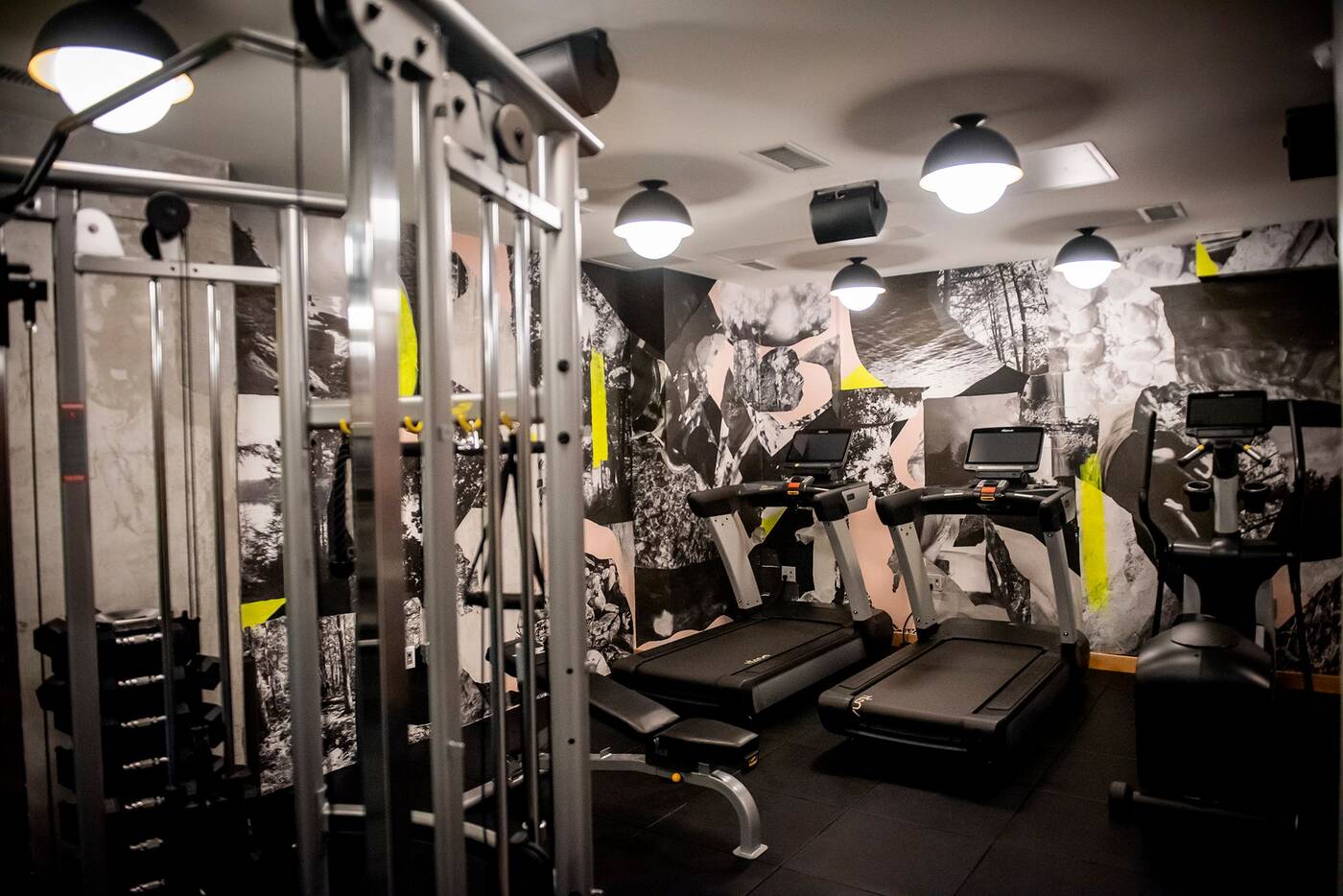 The hotel's main amenity features a compact gym, so you might want to swing by during off-peak hours. It has two treadmills, an elliptical machine, a water station, and a weight bench.

If you're looking to kick back on your first night at the hotel, The Lobby has a full menu of snacks, small plates, and cocktails.

Suspended by steel rods above the hotel's in-house restaurant, Alder, the area sports an impressive set of high concrete arches that create an airiness to the space. 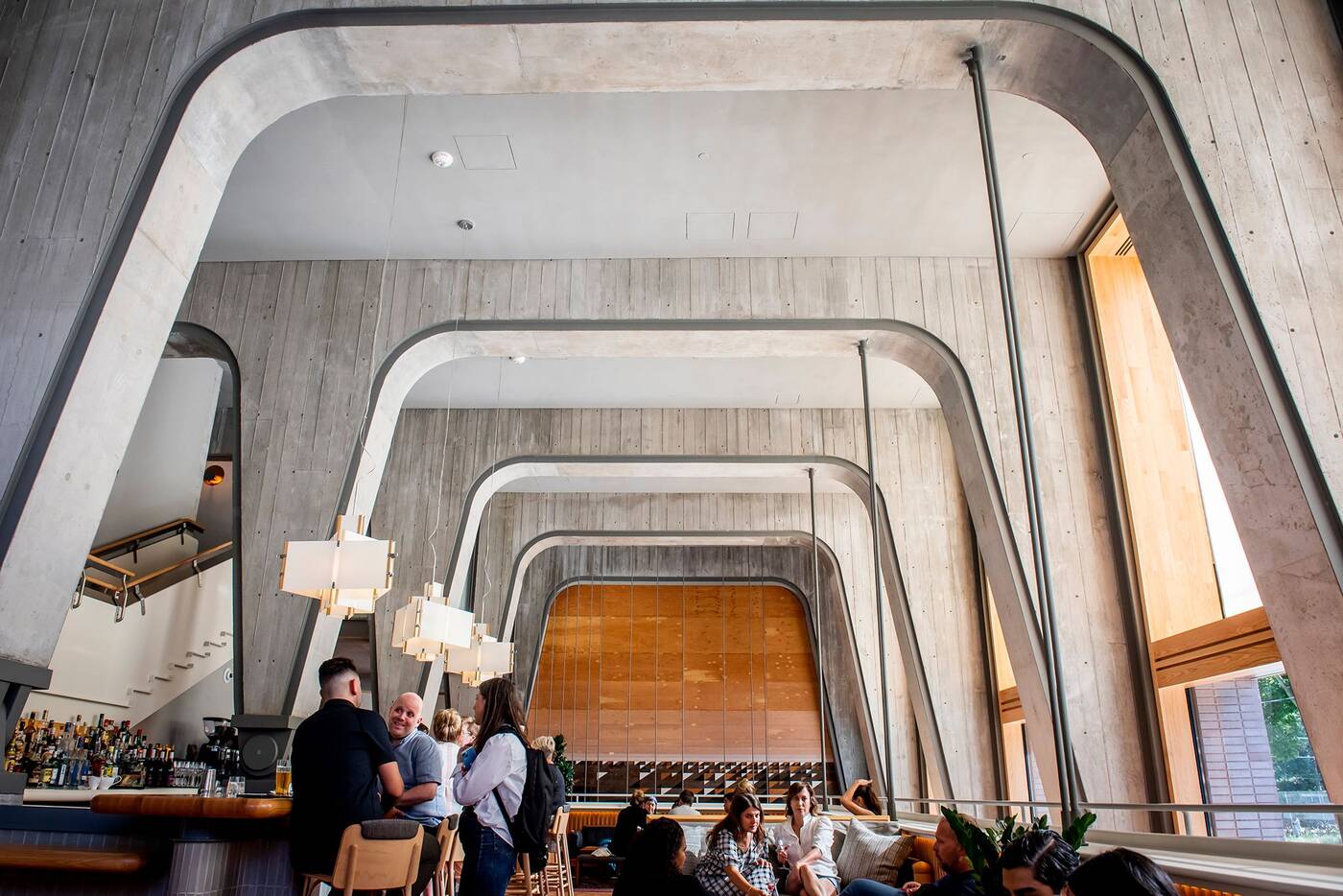 Spending time here feels like you're in a neighbourhood living room. Floor-to-ceiling windows draw in natural light from the outside that reflects off of the vintage Atelier Ace furnishings. 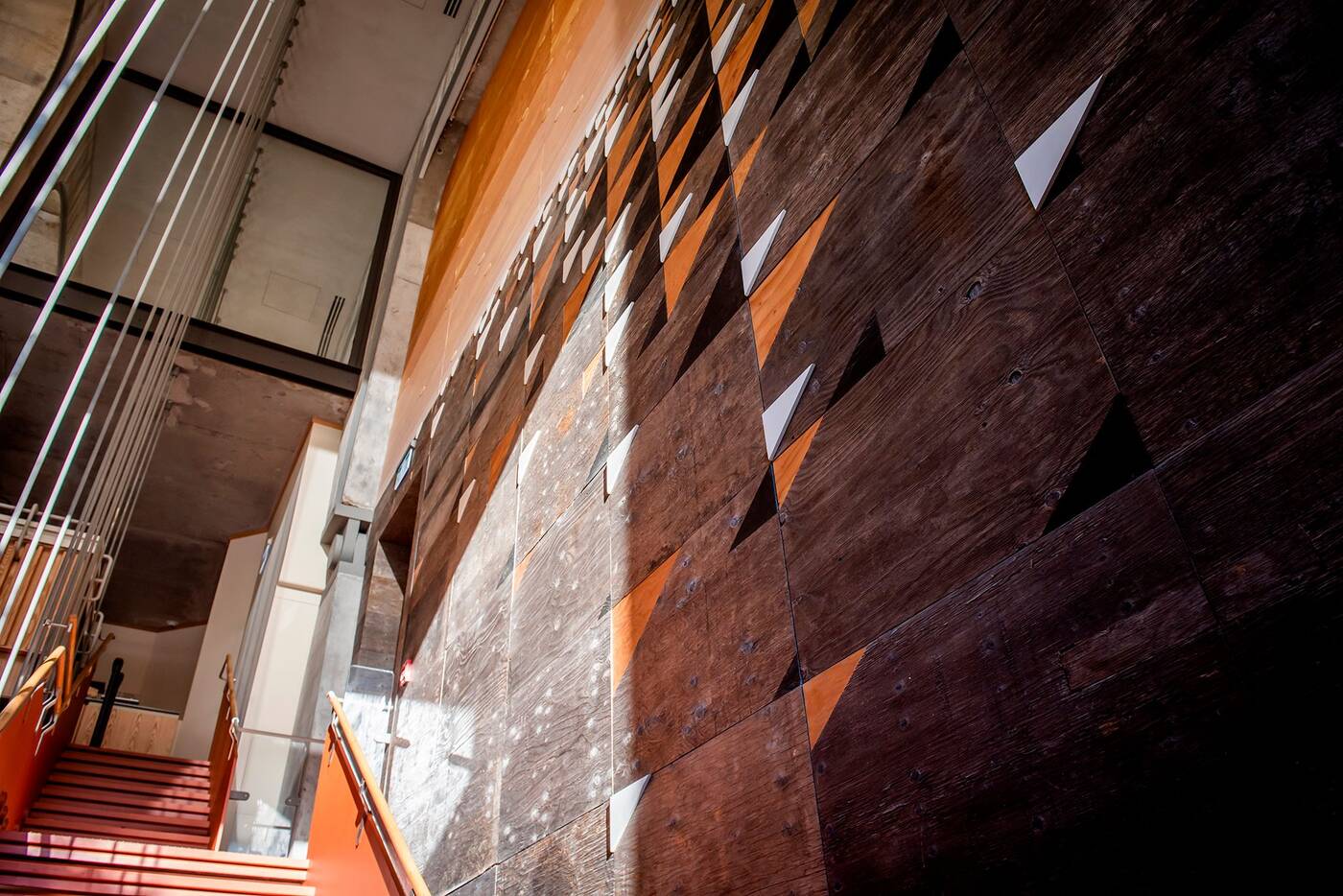 There are over 40 different local artists featured in the hotel. The back wall of Alder restaurant has a stunning piece called Horizon Line designed by the architect A. Howard Sutcliffe, which can also be seen from The Lobby bar. The piece is meant to represent the gleaming waves that wash up on the shores of Lake Ontario. 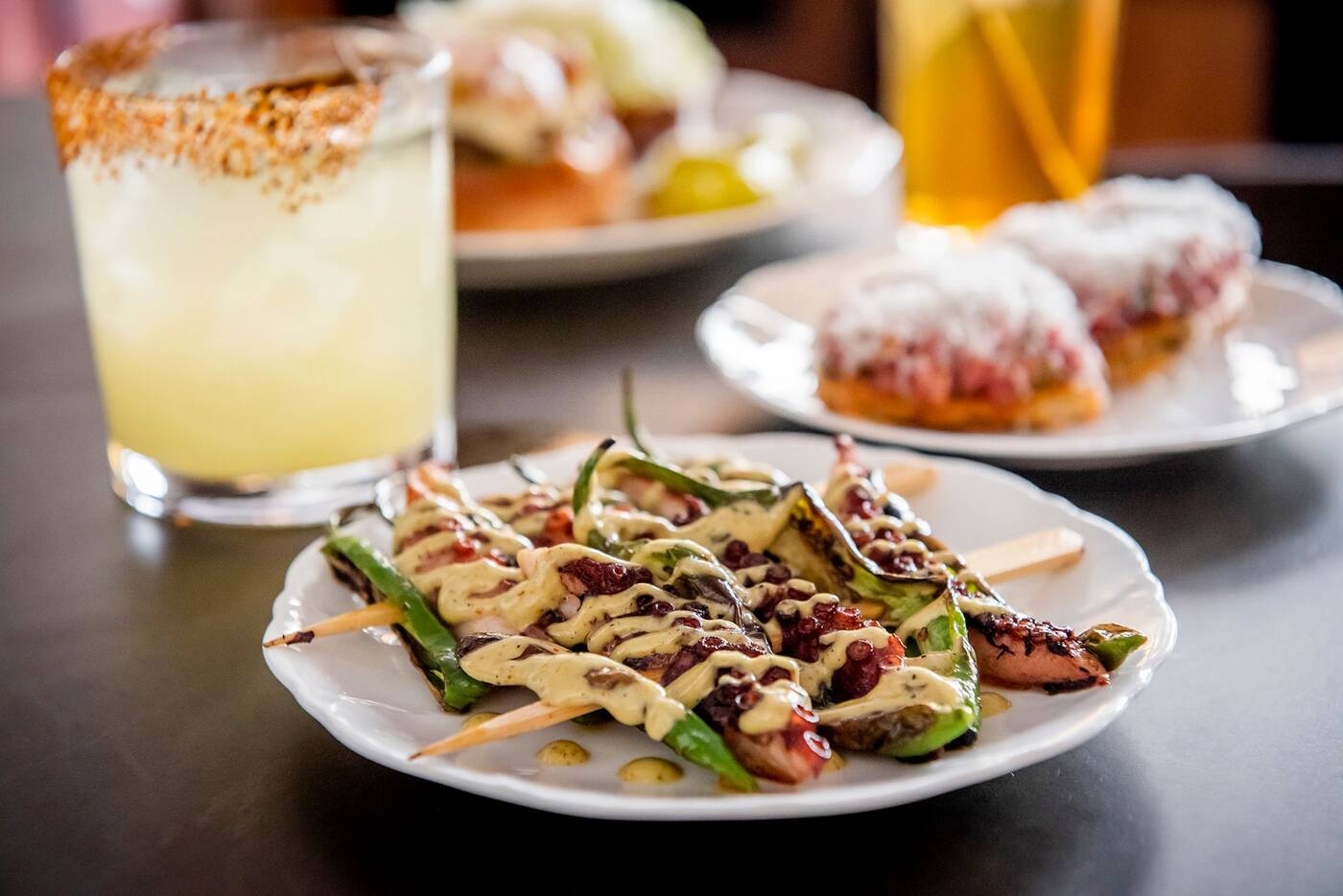 The food menu in The Lobby is headed by chef-partner Patrick Kriss and is distinctly different than the food offered downstairs at Alder, save for the Alder Burger that's available at both establishments.

The Grilled Octopus Skewer ($22.00) stacks up grilled pieces of harissa oil marinated octopus with charred shishito peppers which is finished with a mild-tasting poblano aioli. 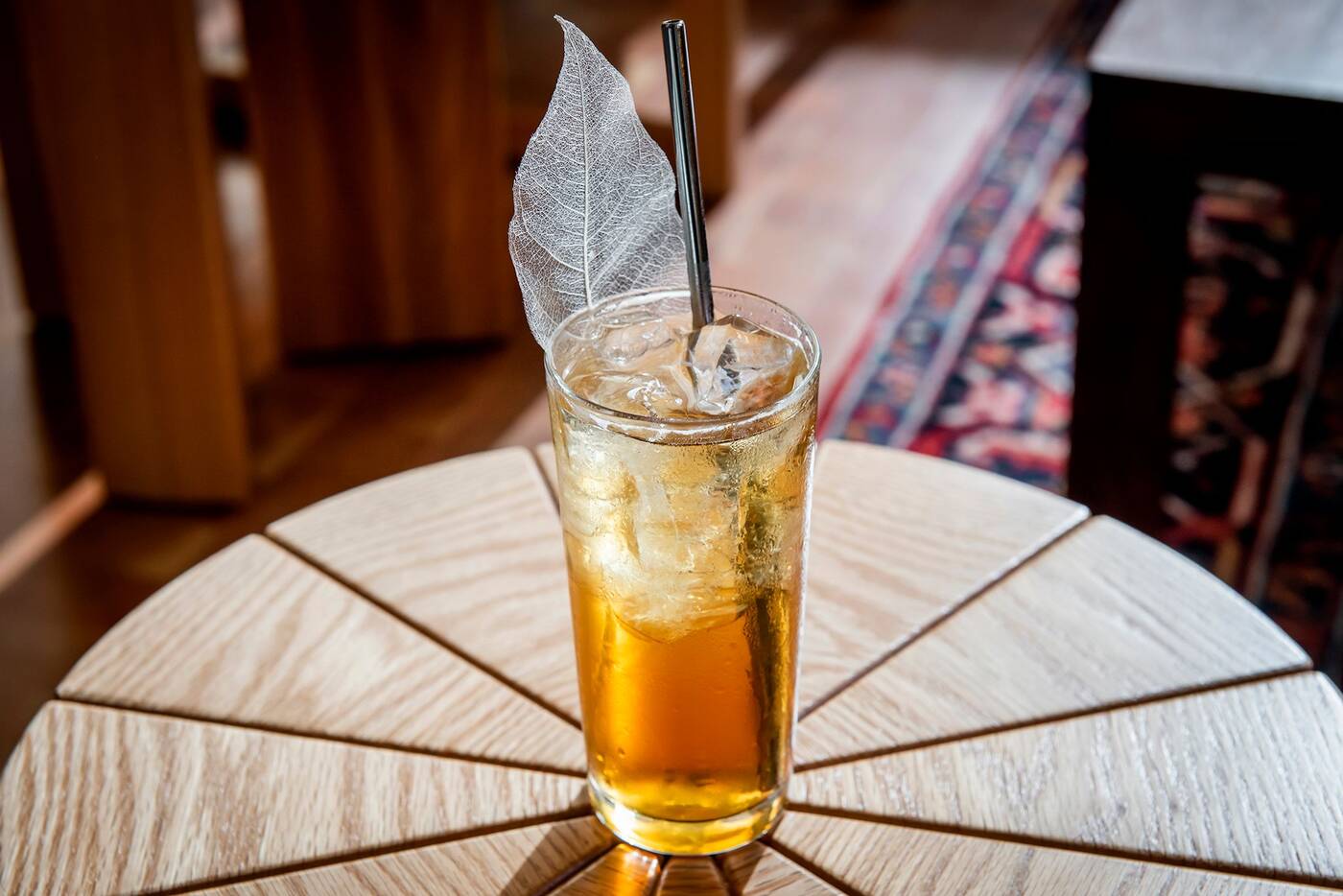 The Black Willow ($17.00) cocktail features a unique preserved leaf vein that adds whispy elegance to a drink made of scotch, Alpenbitter, splashes of honey whiskey, and smoked maple soda.

I found the cocktail aggressively bitter, but anyone who appreciates the taste of scotch would likely enjoy this. 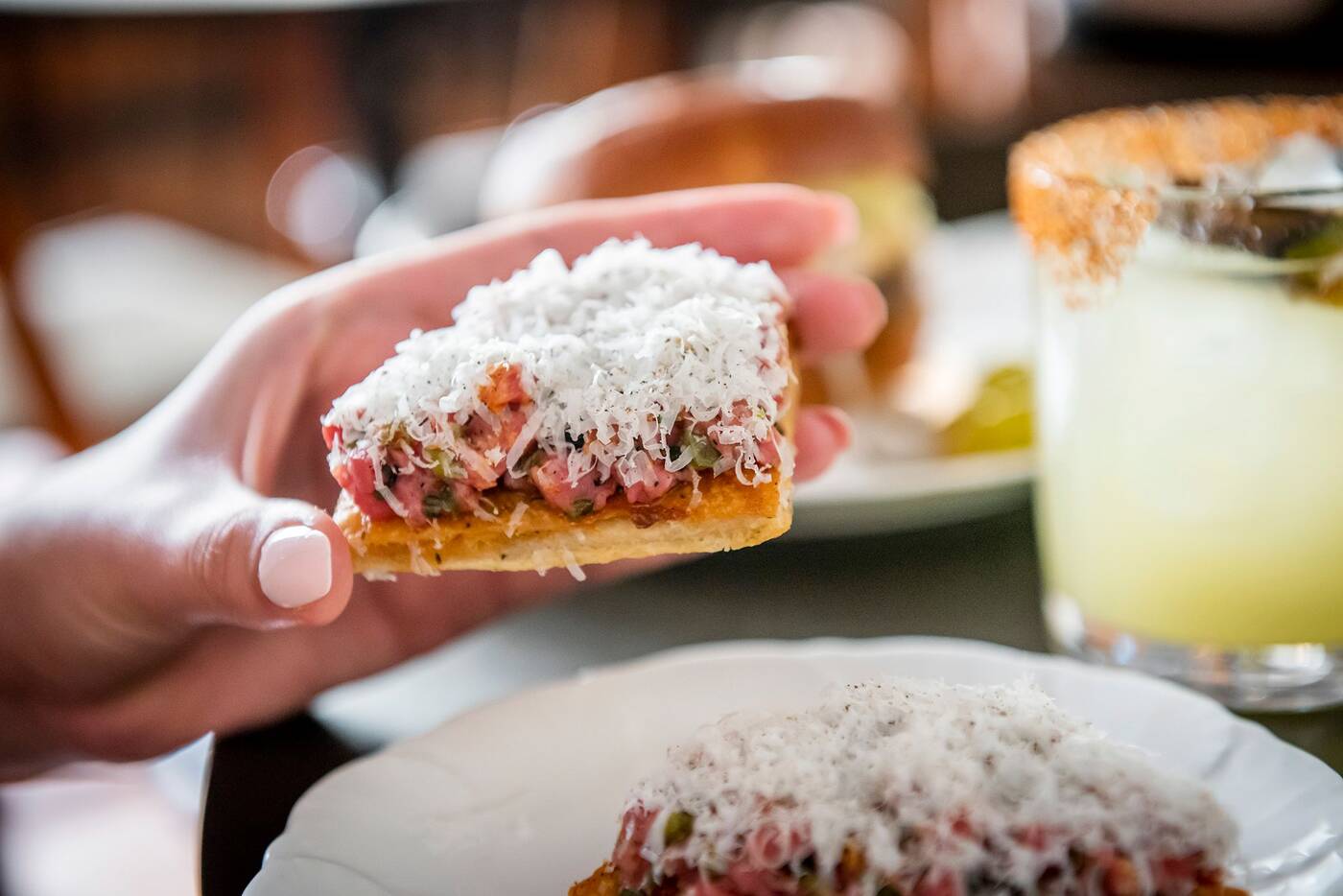 The Lobby's version of Beef Tartare ($18.00) is served on potato flatbread that's been baked in a woodfire oven that's complemented by an array of toppings.

The flatbread is crispy on the outside and chewy in the middle. I enjoyed the tang from the heavy helping of shredded manchego cheese on the paprika, charred garlic, chive dressing and chilli seasoned tartare. 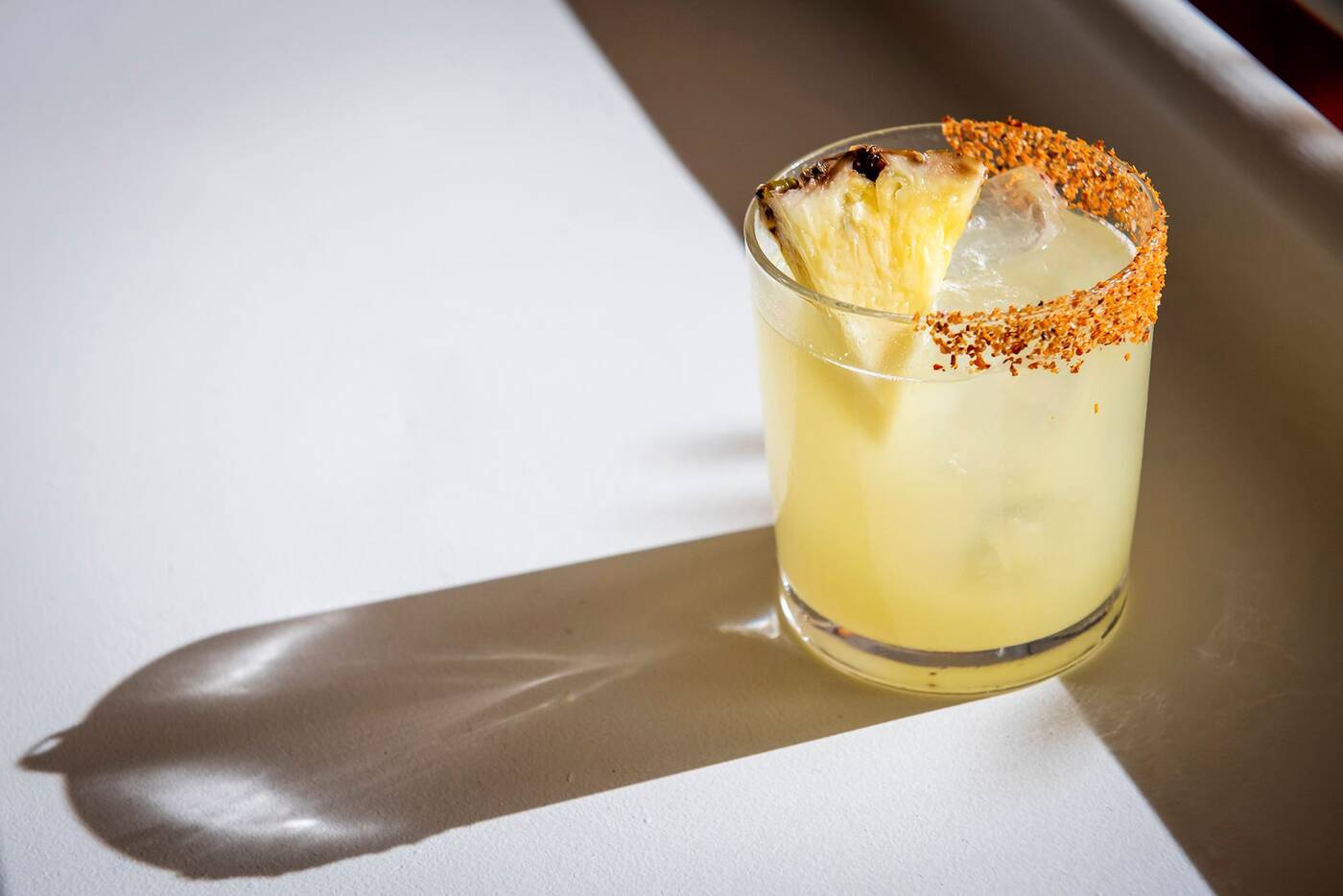 The Lobby also offers a few non-alcoholic cocktails, including Good Vibes Only ($14.00) which is a blend of zero-proof tequila and fermented pineapple.

In addition to hints of citrus, the cocktail was both sweet and sour, which gets a little spicier if you sip on the side of the glass that's dusted with chilli spice powder. 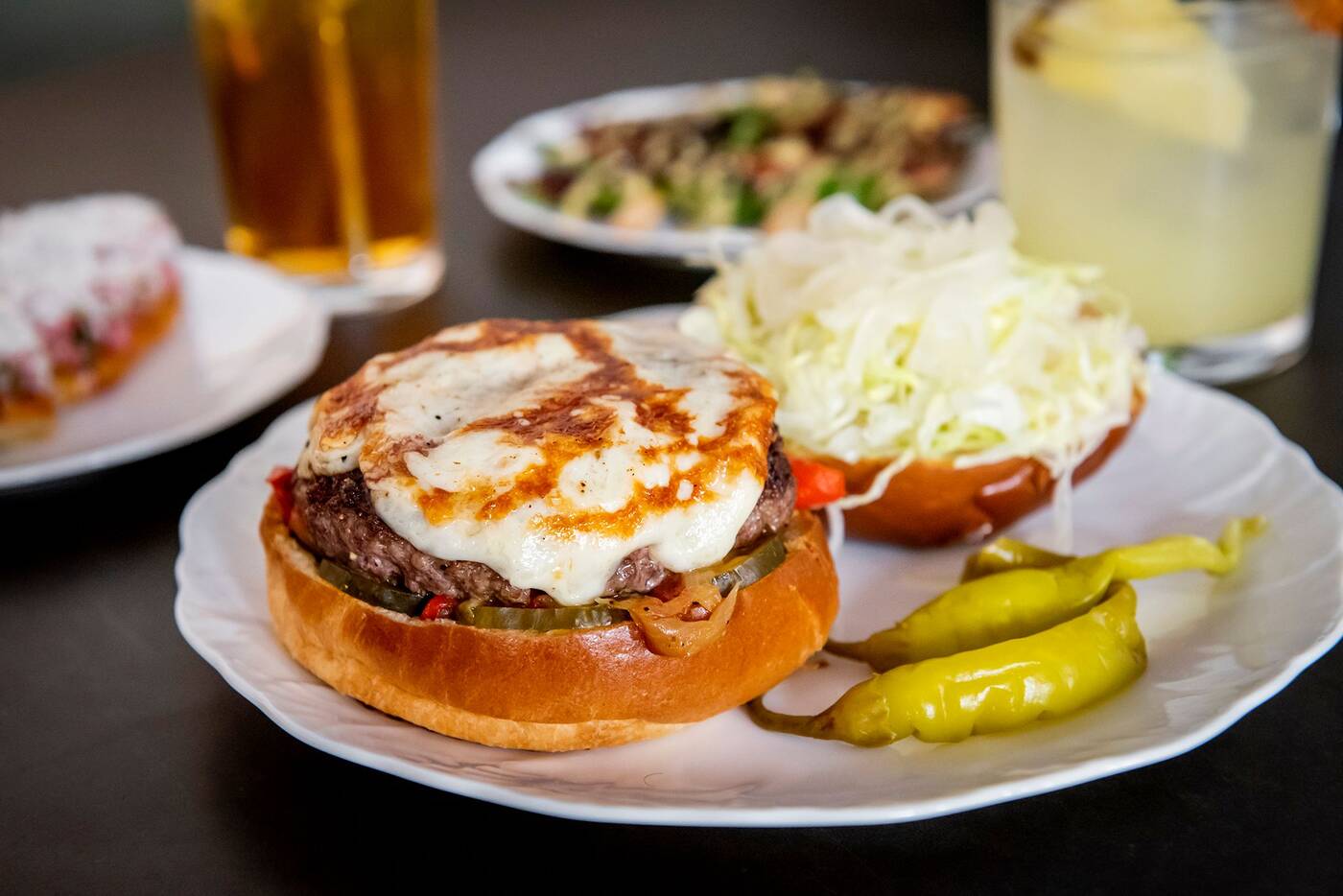 It features a medium-rare patty that's made from ground chuck and brisket, then topped with a thick slice of Havarti cheese that's been seared on a flat top. 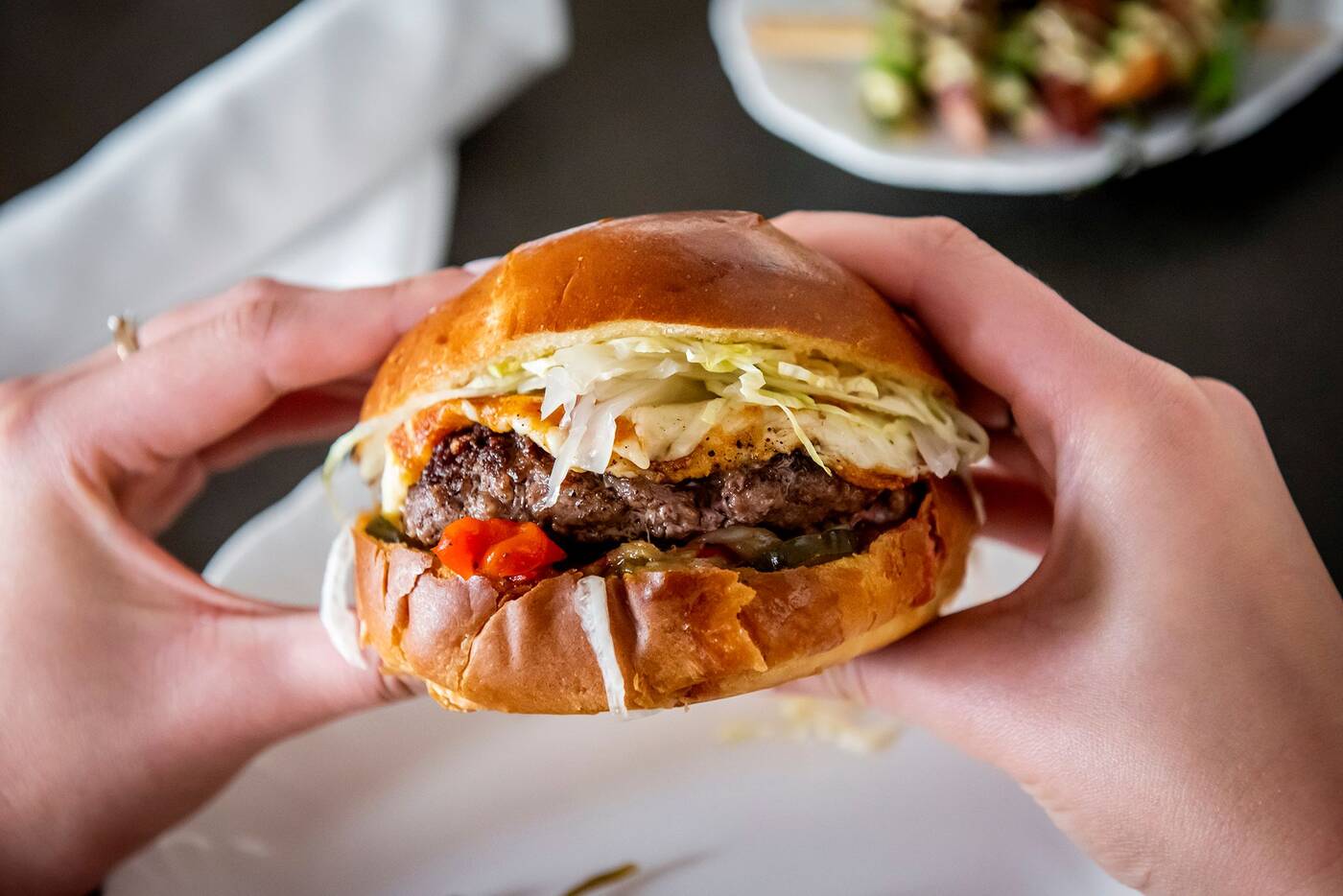 The patty is topped with pickled onion, shredded lettuce, and pickles, plus a bomba (an Italian hot) pepper aioli that's slathered on the bun.

This burger is rich-tasting and not greasy. After eating it, I felt full but not weighted down. 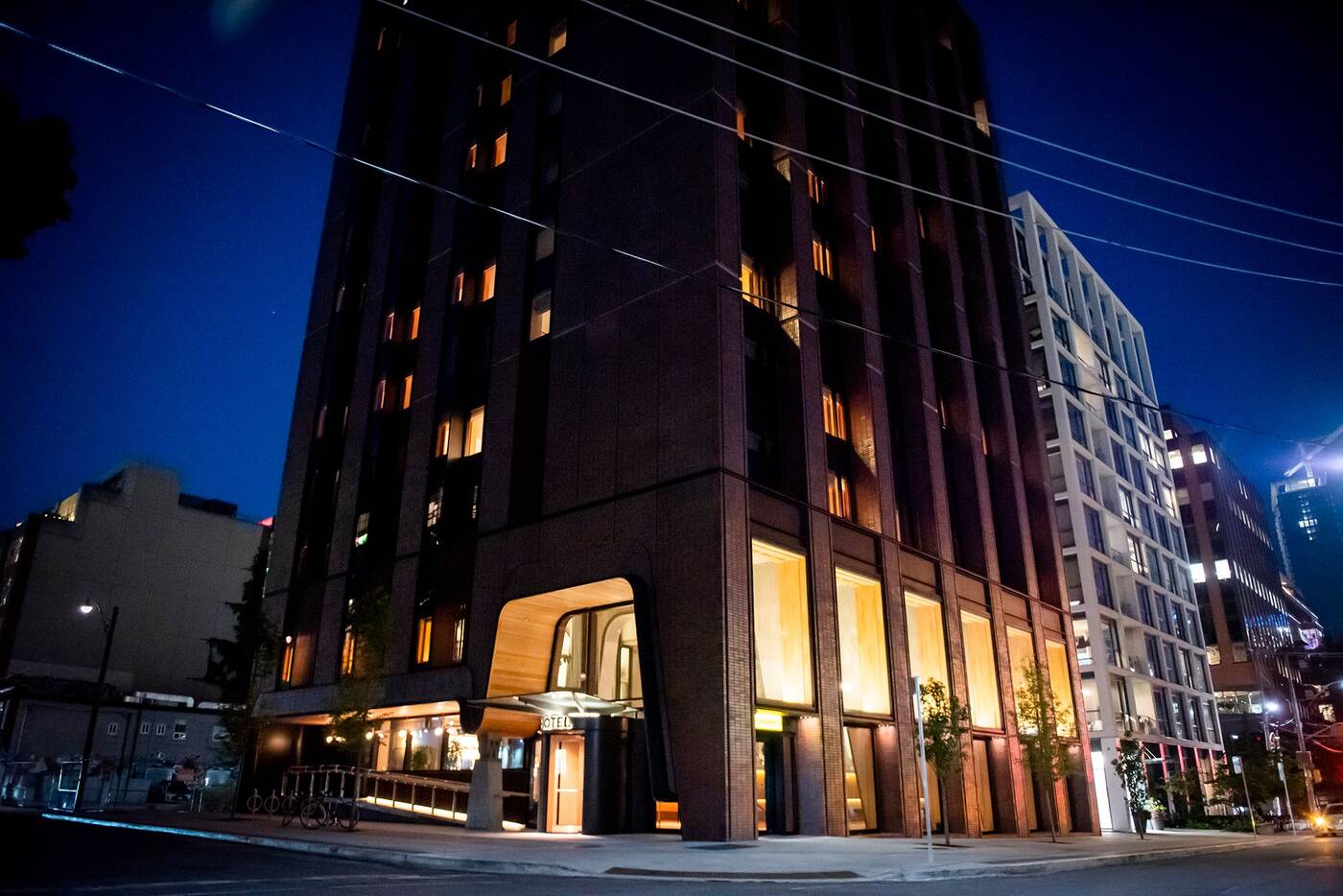 At night, Ace Toronto's interior casts a warm glow into the outside surroundings. Evangeline, its rooftop bar and lounge, will be open in early fall.