The Drake Underground has seen its fair share of epic acts grace its tiny, subterraneous stage.

Despite the number of small venues in Toronto continuing to taper off year after year, this intimate room located in the basement of the Drake Hotel has persisted as one of the most accessible spaces for both local and international DJs and musicians of every genre. 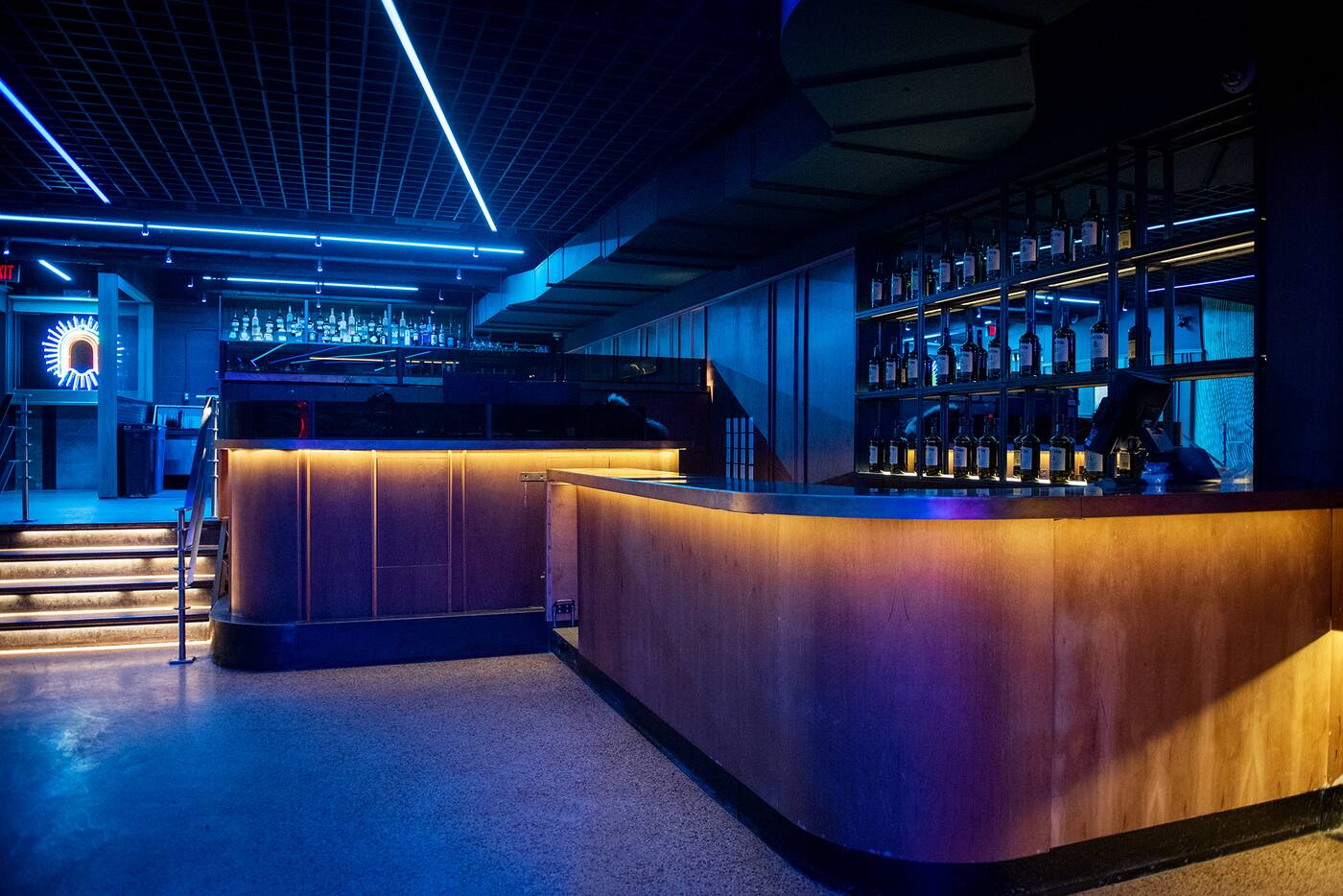 Heavy-hitting acts like M.I.A., Sampha, Beck, and Broken Social Scene are just some of the big-ticket performers who have electrified this intimate room large enough for just 150 guests, while upstairs, hotel guests in the lively lounge dine on burgers worth phoning home about.

If you grew up in Toronto, it’s possible that a show at Drake Underground was the first concert you ever went to, or maybe  the only time you drifted down from the Sky Yard to accidentally find yourself jamming to a grime star. 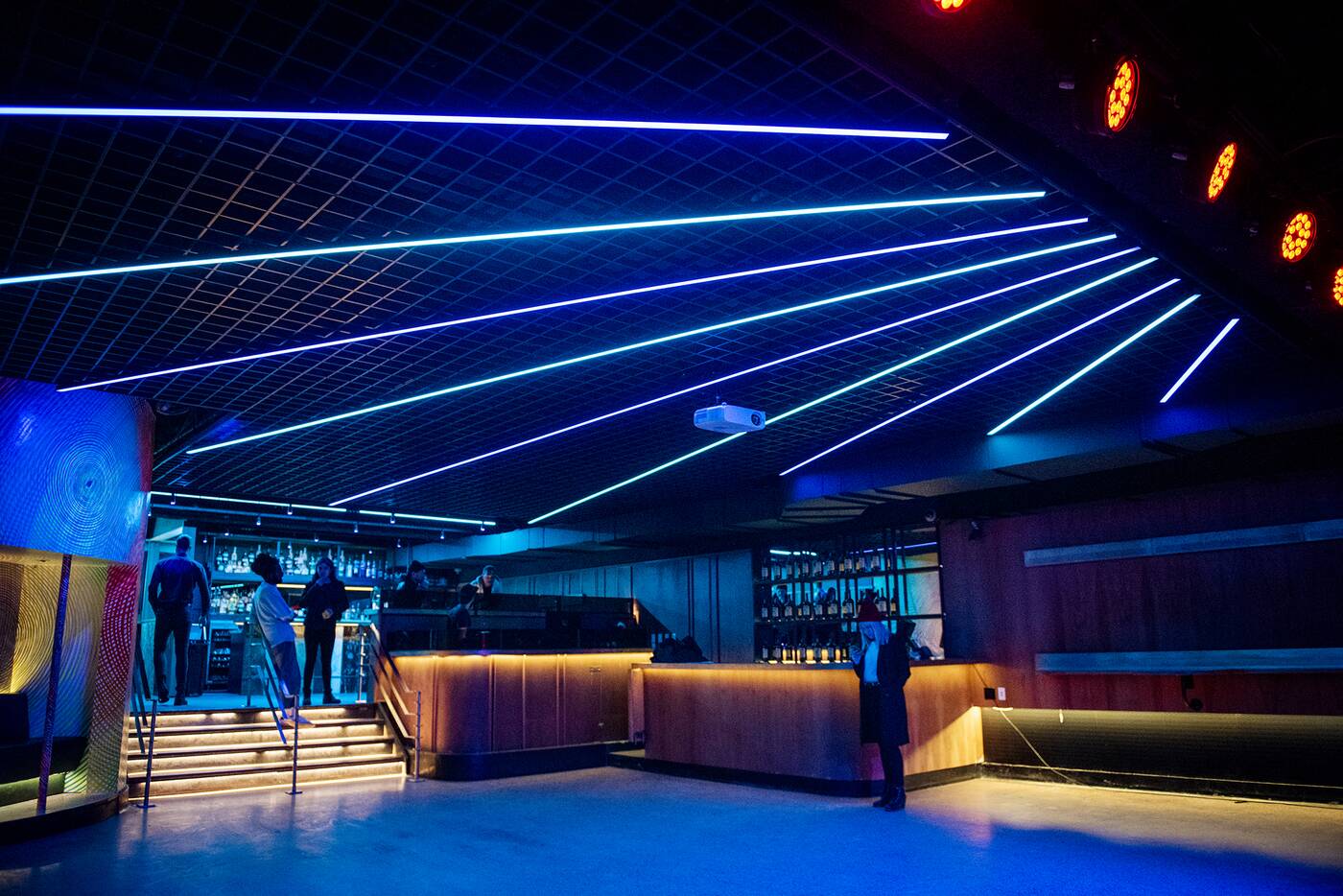 Part incubator and part festival hub for musical cornerstones like CMW and NXNE, there’s no dispute that the Drake Underground—and the Drake brand as a whole—has become a certified cultural institution in the city. 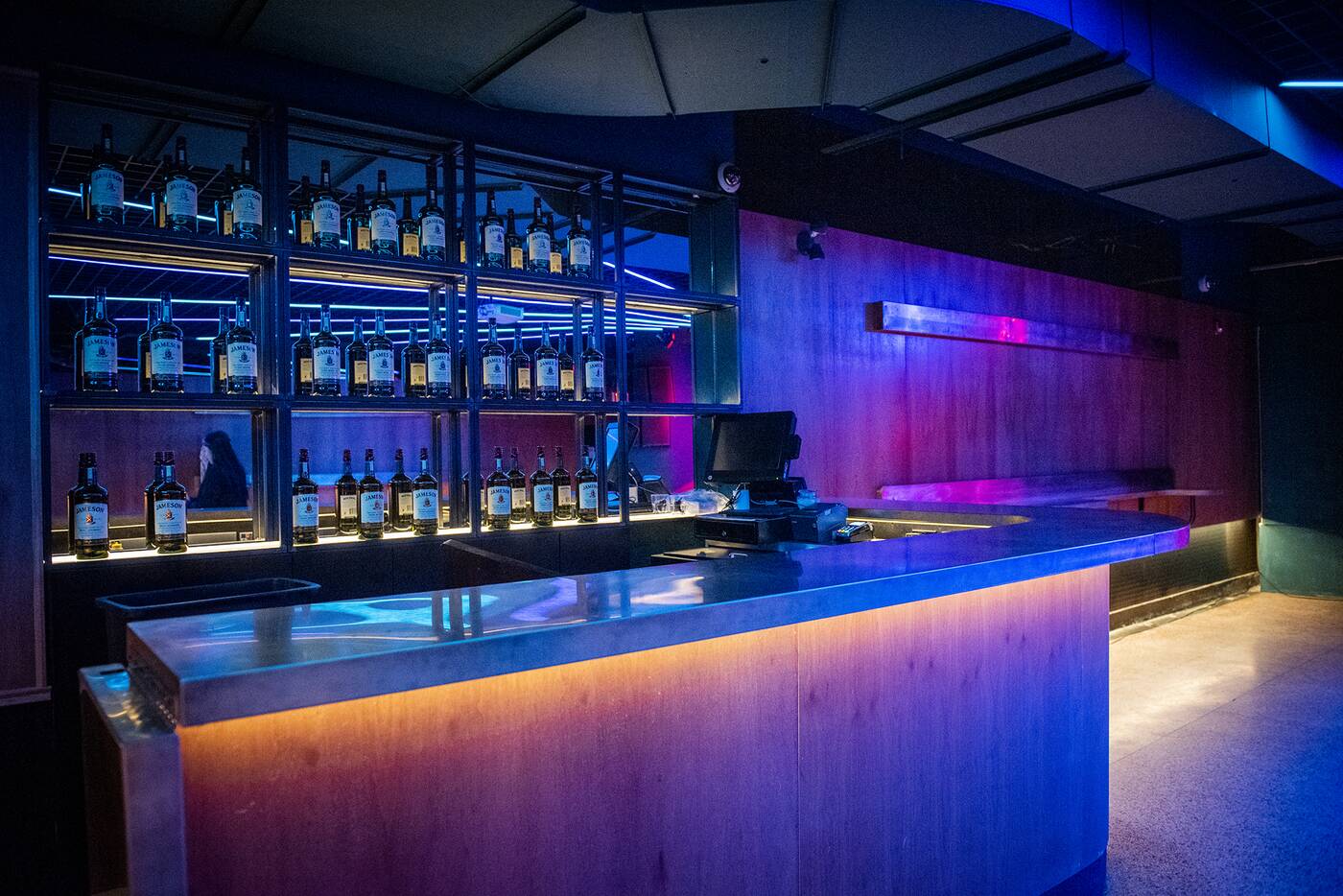 Only thanks to the financial backbone of the Drake Hotel (which businessman Jeff Stober first bought in 2001 for a mere $860,000 before injecting more than $6 million into the project for renovations) is the Underground immune to Toronto’s shrinking venue scene. 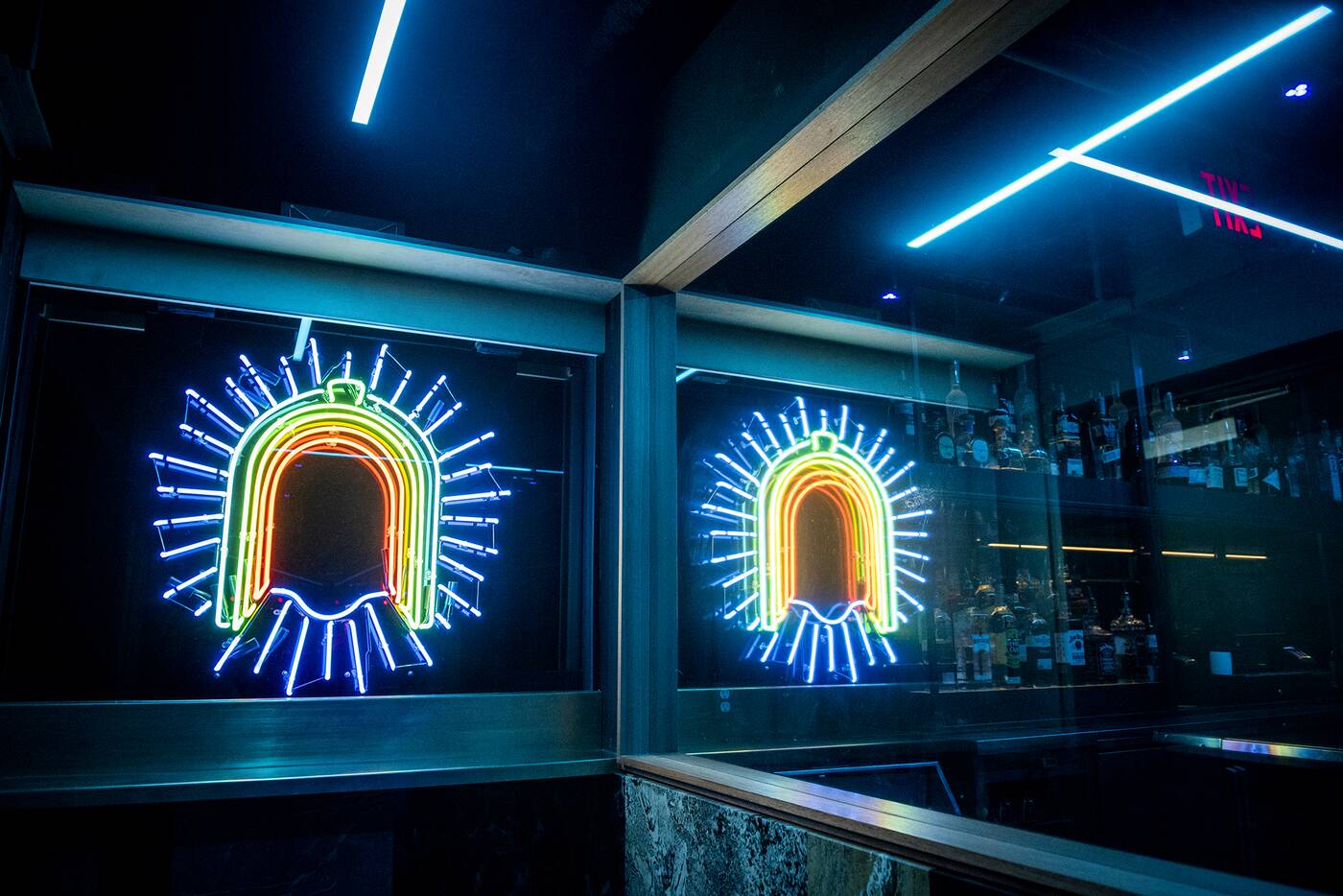 But it hasn’t been all smooth sailing for venue: the Underground emerges from a months-long hiatus following a flood in August 2018 that wiped out the entire basement space, Titanic-style. 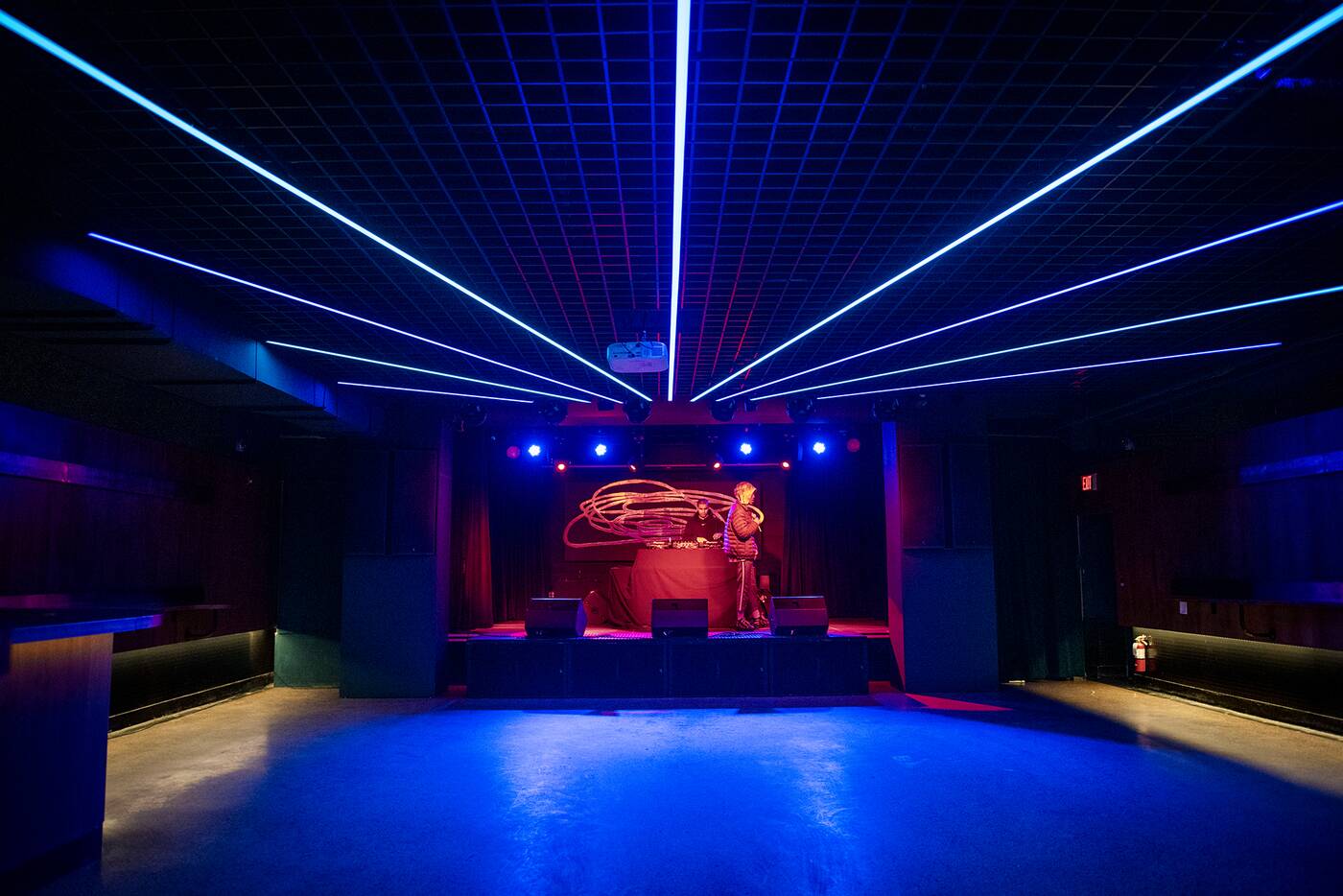 Though the venue itself is well-woven into the fabric of Toronto’s music scene, it’s taken work and careful planning to bring back the momentum.

Aside from the impressive sound system (an Avid Venue SC48 console and BoldAudio speakers working with BFX218S subs) and highly skilled sound technicians, some basic renovations have added a sleeker quality to the experience. 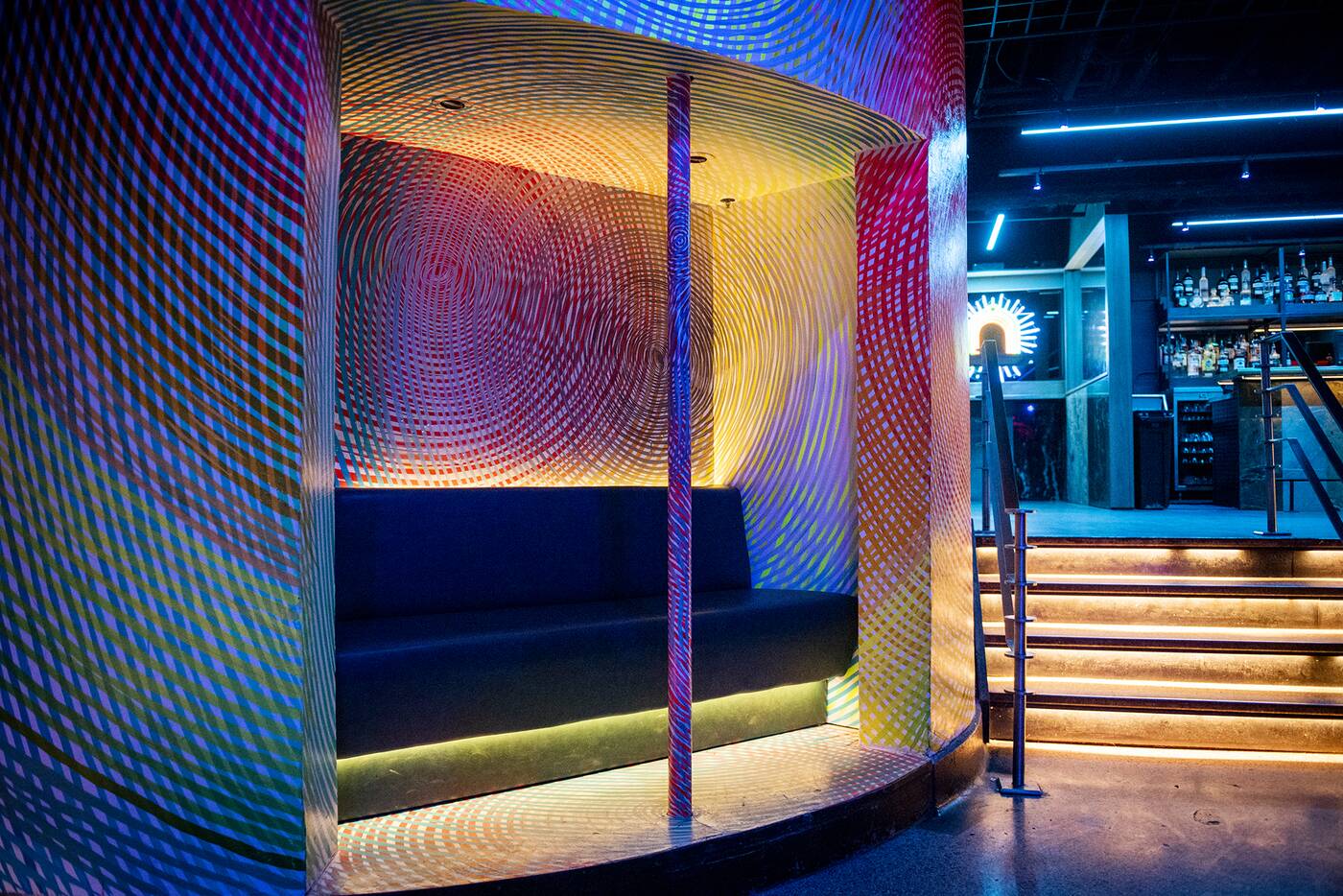 New art comes by way of Toronto artists Shellie Zhang (the rainbow neon installation by the front door) and Nate Nettleton (the giant wooden sculpture behind the stage), while the Kissing Booth area has gotten a wallwork upgrade via American artist Andrew Schoultz. 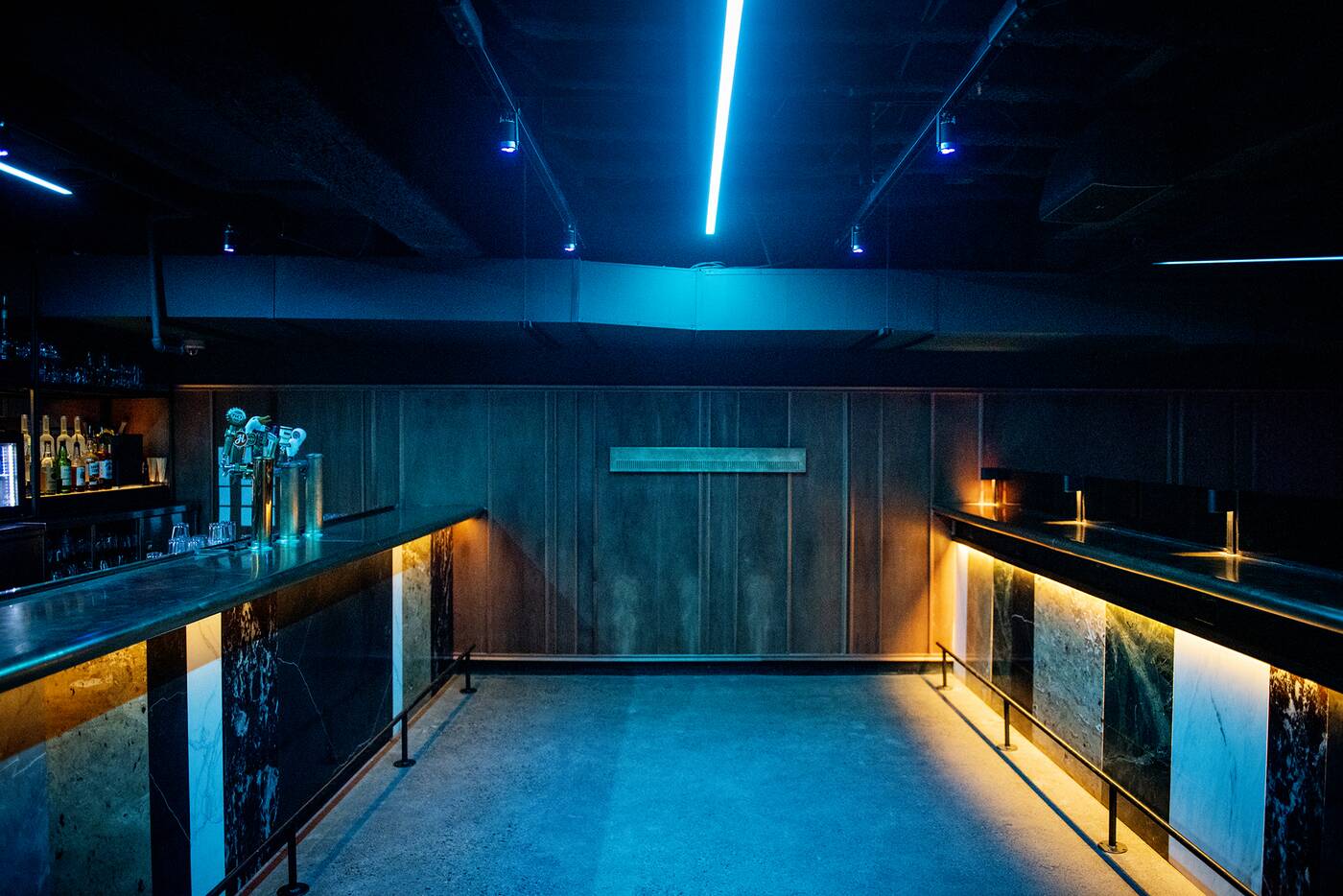 There’s also a new mobile neon lighting system with changing colours gracing the ceiling, while the back bar and countertops have gotten glassy upgrades. Drink rails have replaced a few clunky booths by the stage to open up the floor. 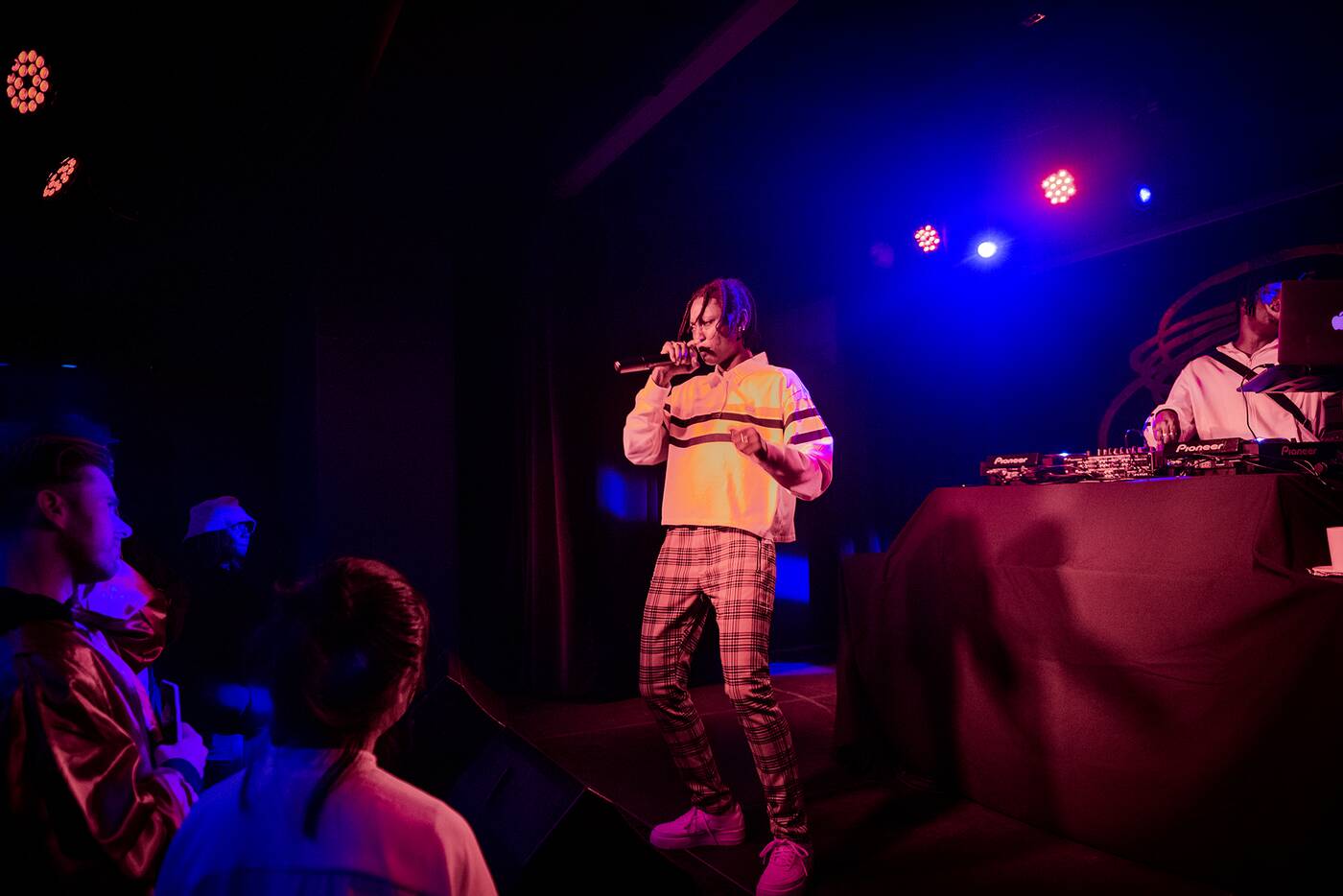 According to Chris Wilson, Drake Underground’s music programmer, there are about 200 to 250 artists playing the Drake Underground every year. Considering the venue’s reputation as a top-notch space (staff hospitality extends down here, too) it’s likely not hard to fill up the roster.

“A lot do people are really shocked when they come in and see the level of respect and care that’s taken for the act to sound good,” says Wilson. “For us, everybody is a star.” 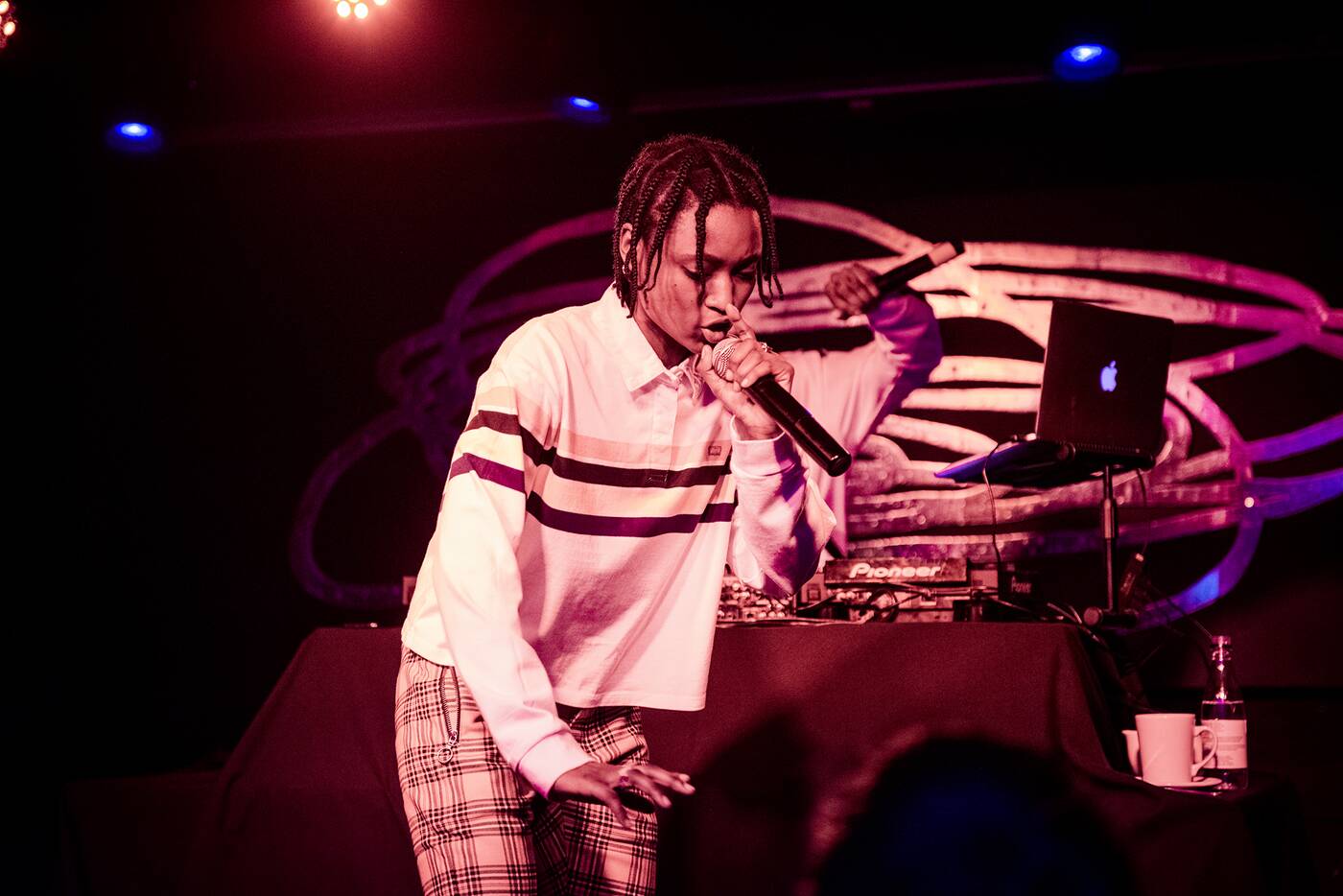 A testament to the conducive relationship between music hotspots and the hotel industry, Drake Underground maintains its largely DIY feel thanks to inclusive community parties like the queer party YES YES Y’ALL, the groove-loving Beam Me Up Disco, and Practice, the improvisational stage for Toronto talent. 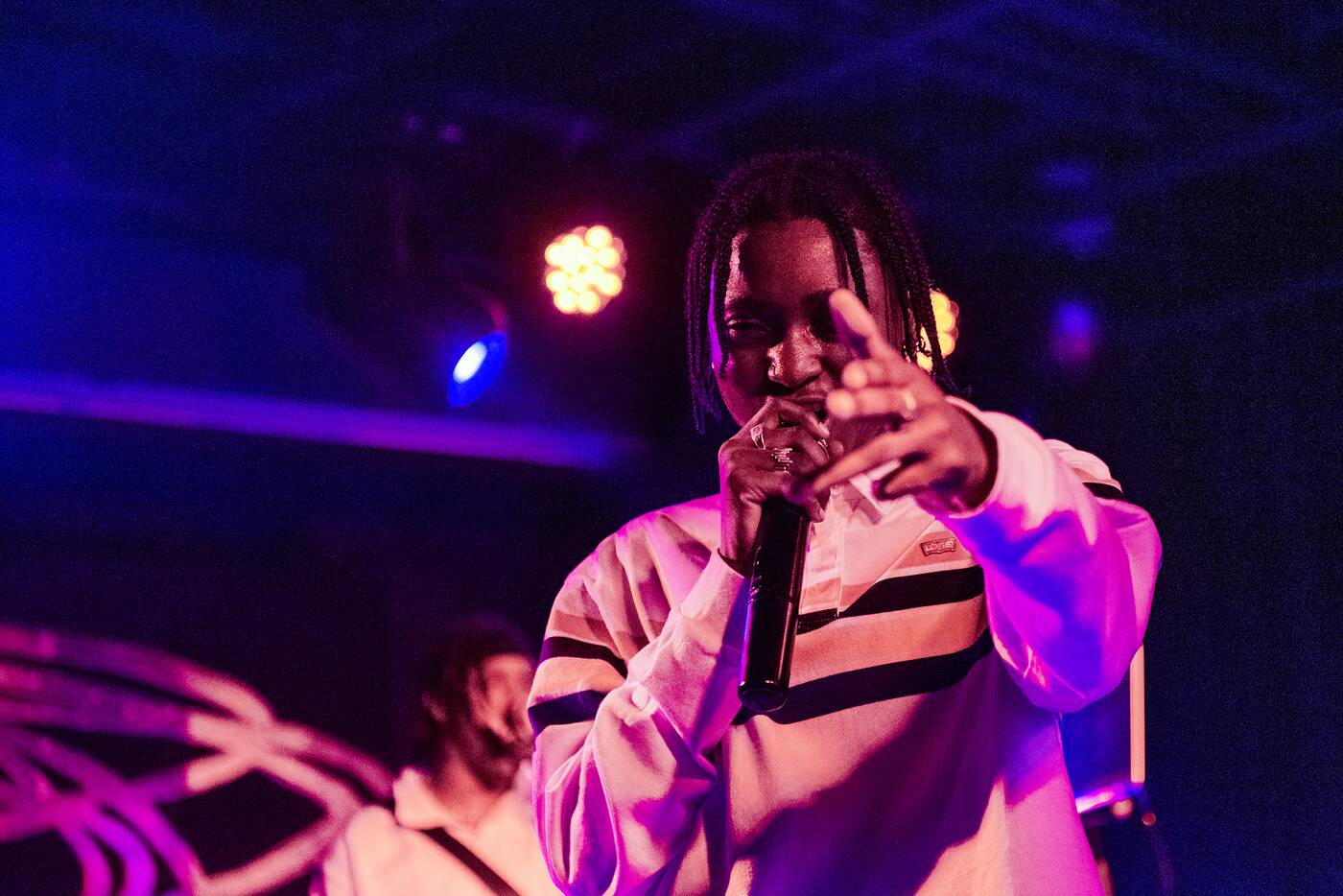 And as the world begins to recognize local acts beyond those who get the most radio play, the Drake Underground plays an essential role in the development of new artists looking to hone their craft in a polished space.

“It’s important to have a small space like this....it’s important to see the emerging music that pushes the boundaries, whether that’s experimental stuff [from] POC, women, and LGBTQ,” says Wilson. “It’s an interesting time in Toronto music scene.” 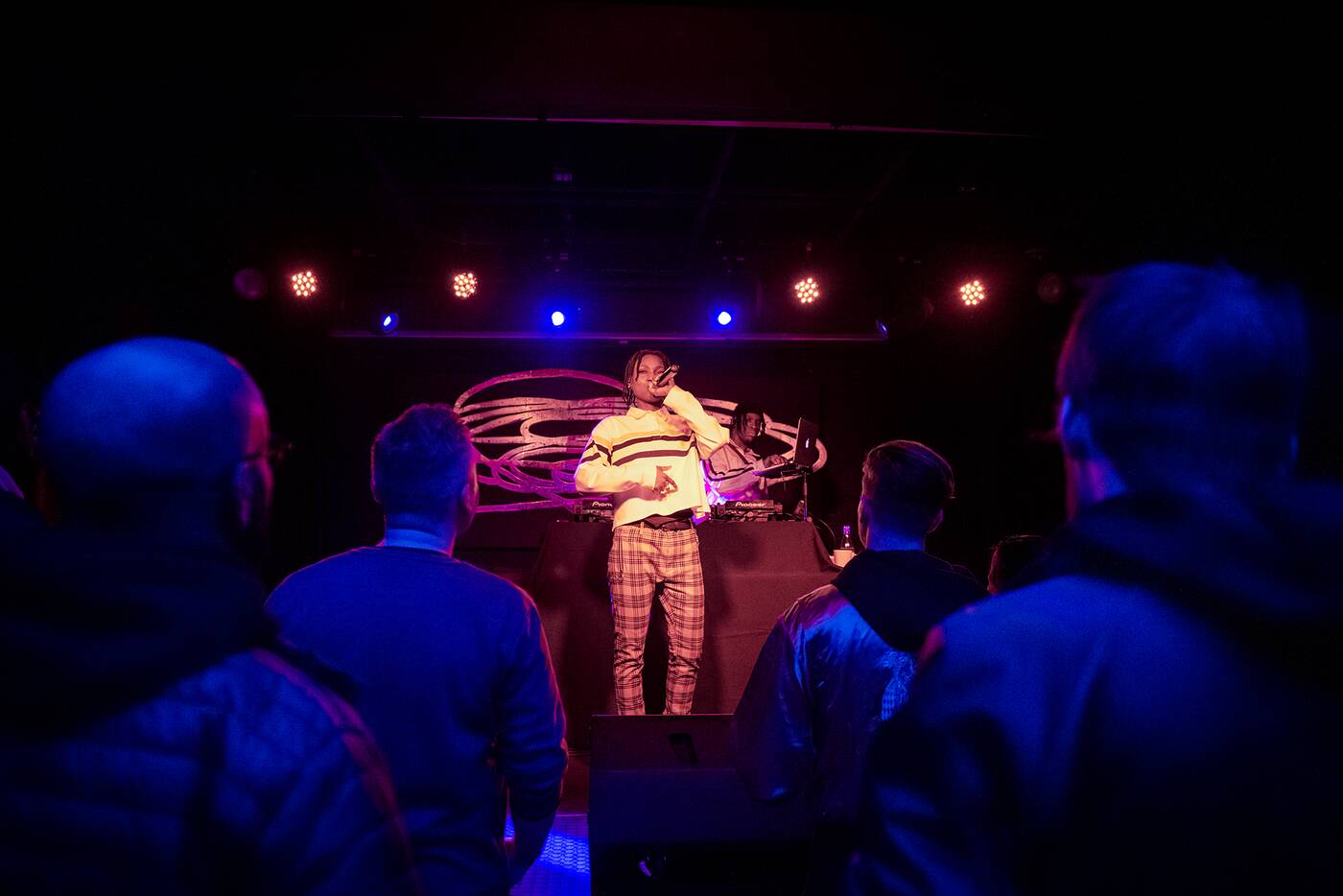