Toronto Through the Eyes of The Drake Hotel's Jeff Stober

Jeff Stober is expanding his empire. Two weeks from now, on December 5th, the Drake Hotel will mark its first foray outside of West Queen West when a second Drake General Store opens in Rosedale. It's a surprising move (to me anyway). Stober had long been rumoured to have his sights set on Queen East, even though he has repeatedly denied he ever had any interest in revamping what is currently Jilly's stripclub.

The story of Jeff Stober has been well chronicled. At the age of 22 he founded a corporate head hunting firm and then sold his stake for millions in 1998. In 2001 he bought the dilapidated Drake Hotel and sunk an initial $6 million into it by the time it opened in 2004. Despite occasional flares in the neighbourhood, most deriding the Drake for its gentrification of the area or for the influx of 905ers and other non-locals who tend to descend on the lounge or SkyYard every weekend, the Drake is generally considered a huge success and was named the best hotel in Toronto in a recent poll on this site.

Stober, who is from Montreal and a big Habs fan, has discerning (and some might say expensive) tastes. He once told the National Post that he buys his onions from Pusateri's, the city's priciest grocer.

This past week he took a time out from his busy schedule to fill me in on the Drake's latest initiative, the soon-to-be crowded local boutique hotel scene and where he likes to dine in Toronto when he's not chowing down on the steak frites or grilled cheese sandwiches expertly prepared by the staff of his hotel.

The Drake just announced plans to open a second General Store. Why expand the Drake brand to Rosedale?

The Drake General Store offers a fun and unique opportunity to continue our mandate of providing a cultural platform, sense of community and world class hospitality. The General Store concept comes from a fascination of mine for classic urban hotels, which have historically acted as town squares for both travelers and locals alike. Since opening our doors, we've re-imagined the traditional gift shop/general store/flea market in a contemporary and urban context, thus allowing us to continue the deep rooted tradition of hotel offerings within our unique city.

We are thrilled with the excellent reception the store has received so far, and thought it made perfect sense to expand the concept beyond the radius of West Queen West. Our cultural brand has a really cool following in many parts of Toronto, including midtown. The second location lets us reach out to another exciting neighborhood with the benefit of bringing fantastic attention back to our first love, West Queen West.

Lastly, I come from a family that has deep roots in retailing as my dad ran several women's clothing shops in Montreal for over 40 years. In a sense, it is a homecoming of sorts.

Is this just the beginning of future expansion plans? Should we expect additional Drake initiatives to pop up in other areas of the city?

We definitely see an opportunity to grow beyond our existing walls. Toronto success stories need to be encouraged and celebrated, especially those that focus on culture and community. I have a 30 year history in developing successful employee-centric, customer focused organizations and sincerely feel that there can never be enough entrepreneurs within Toronto's cultural landscape. It is the achievements of these very artists and cultural leaders that make Toronto as unique as it is.

We are proud of our West Queen West roots and want to share the story of this incredible neighbourhood beyond our existing platform - as have many local Queen West bands, visual artists, actors and designers. Whether that takes shape as more general stores, future hotels or other cultural undertakings remains to be seen. What we do know is that we've gathered an incredible brain trust of professional talent within our company with whom we have a real opportunity for sustained growth. At the core, building a successful organization that puts smiles on the faces of its employees and guests continues to be an incredibly fulfilling undertaking. 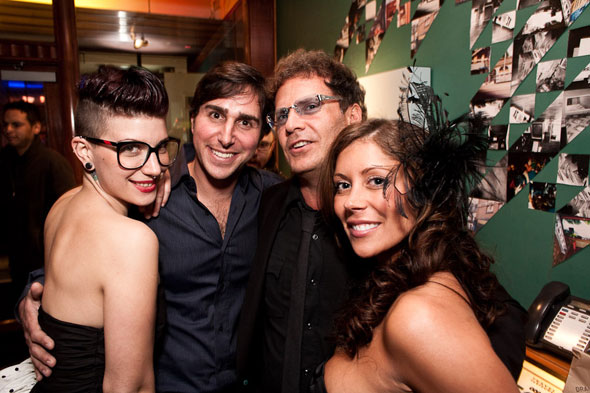 A number of years ago you bought up a bunch of real estate along Queen bordering the Drake. Any plans for redevelopment or expansion?

We feel deeply connected to this neighbourhood, have lived through many of its urban twists and turns over the last decade, and are ecstatic about continuing to be a major anchor in the years to come.

We've been working very hard over the last year, in consultation with the city, neighbourhood and a myriad of planners, heritage architects and municipal professionals to devise a plan that will allow us to continue developing our historic property, in a modest yet community-enriching context.

We are not yet ready to announce any specifics, but we can say that we are very excited about the notion of growth and as well as neighbourhoods, old school Main Streets, green spaces and green buildings, exciting employment opportunities for locals and working with artists to create additional large scale art installations for the community. I have always admired historic architecture, contemporary art, travel, food and the great tradition of hotels, so I relish the opportunity of continuing to build upon this very platform.

You made your initial money in a business completely unrelated to hospitality. Has running a hotel and restaurant property been a humbling experience or do you believe you've figured this industry out?

I don't know if you ever fully figure any business out, as there are always so many variables to deal with, especially in a hands-on profession like hospitality. That said, we have a really good handle on running our hotel property and get better at it every day. We have gathered an amazing team of professionals, all of whom give their all, and love to learn and grow. It has been an incredible emotional and intellectual pursuit over the last eight years since I bought the building in October of 2001. Through that period, I have enjoyed my personal evolution from being a corporate CEO to being a part of a grassroots, organic and community based initiative.

Aside from the Drake, what hotels in Toronto (and abroad) do you admire most?

I have so many favourite hotels including Sunset Towers in L.A., the Peninsula House in the Dominican Republic, Home Hotel in Buenos Aires, Hotel Particulier Montmartre in Paris, The Oriental in Bangkok, DeviGarh in India and Kavos Naxos in Naxos, Greece.

For the most part, they tend to be smaller, more intimate properties where the guest is made to feel special, a member of the family and at home. It has never influenced me as to whether a property is a one star motel, a tented camp or a seven star tower; so long as ownership takes tremendous pride in the property, keeps it extraordinarily well maintained and offers an experience that is unique, expressive and fun.

Over the next few years, a number of boutique hotels are expected to open in Toronto. Are you concerned that places like Hotel on Queen, the Thompson Hotel and The Gansevoort will steal some of the Drake's business?

This raising of the bar will assuredly bring out everyone's best. It is a sign that Toronto is maturing and will garner additional global attention for our great city, which is a benefit for everybody. There is certainly more than enough to go around as the industry has been playing catch up in the absence of unique boutique properties until this decade, for the most part.

In what restaurants do you like to eat when not dining out at the Drake?

There are so many fabulous choices in the city. I really enjoy Giancarlo Trattoria, Foxley, Swan, Oyster Boy, Harbord Room, Buca, Cinq 01, Asuka, L 'Unita, Black Camel and so many others...

Aside from the Drake, where do you like taking friends when they visit Toronto?

I tend to enjoy unique neighbourhoods, be it The Junction, the island, Queen West, the Ossington strip and Dundas Street West, Yorkville, Yonge and Rosedale and Queen Street East around Leslieville.

I walk a lot, cycle and I drive.

Who would you like to see be the next Mayor of Toronto? Would you ever consider running at some point in the future?

I leave politics to the professionals. Besides, I am having way too much fun with everything I'm doing now.