Toronto continues to overlook the gem that is Little Ethiopia

It seems like Little Ethiopia will never get the designation it wanted.

It’s been nearly a decade since a handful of Ethiopian businesses first petitioned the City to formally designate a tiny stretch of Danforth East as Little Ethiopia, but the BIA has been firm in its decision to classify itself as “The Danny” instead. 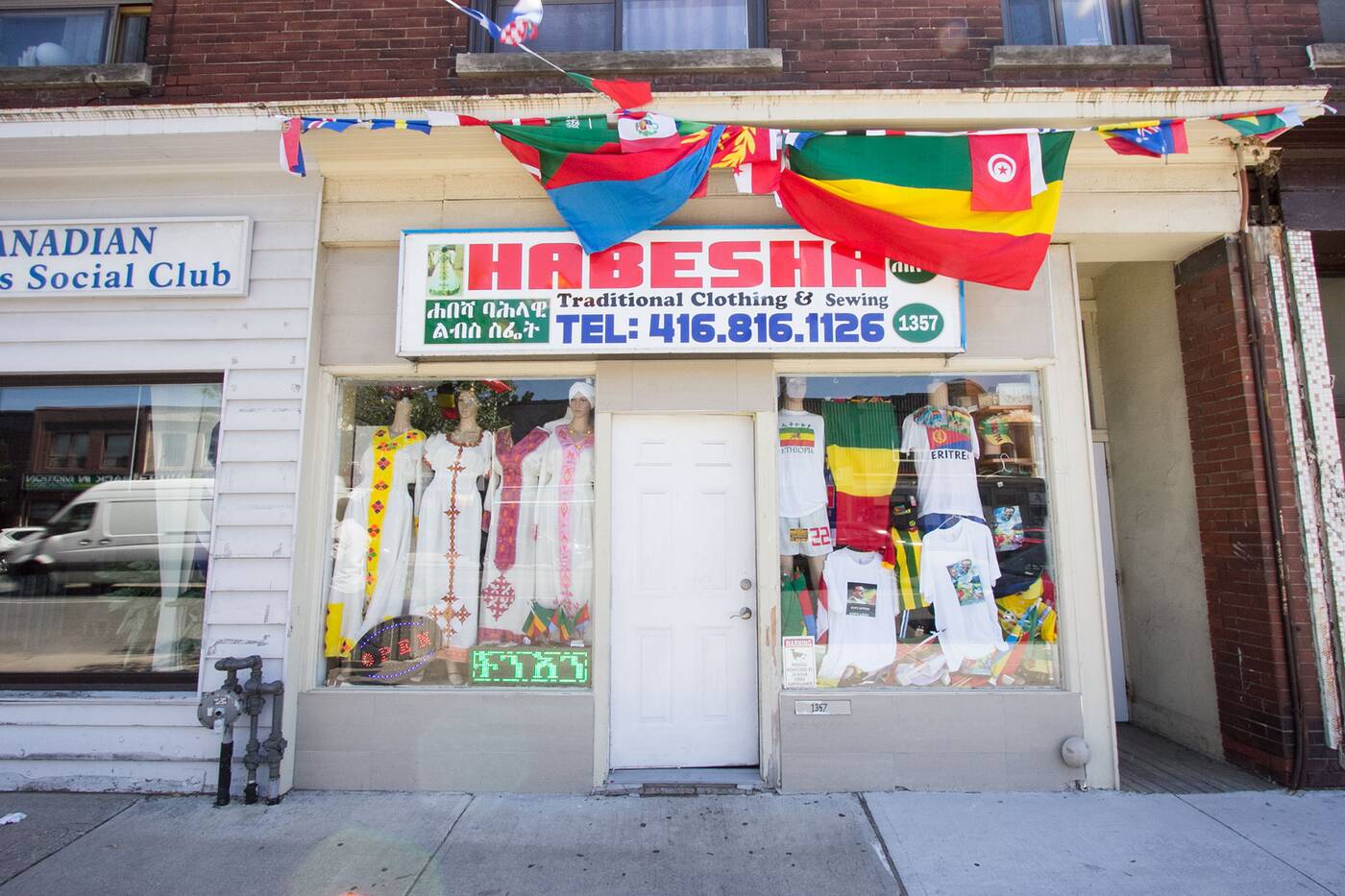 According to the city, the 5-minute stretch between Greenwood and Monarch Park Avenues is too diverse to classify as solely Ethiopian. Step out of Greenwood Station, however, and it’s hard to deny that it's the Habesha community with the strongest presence here. 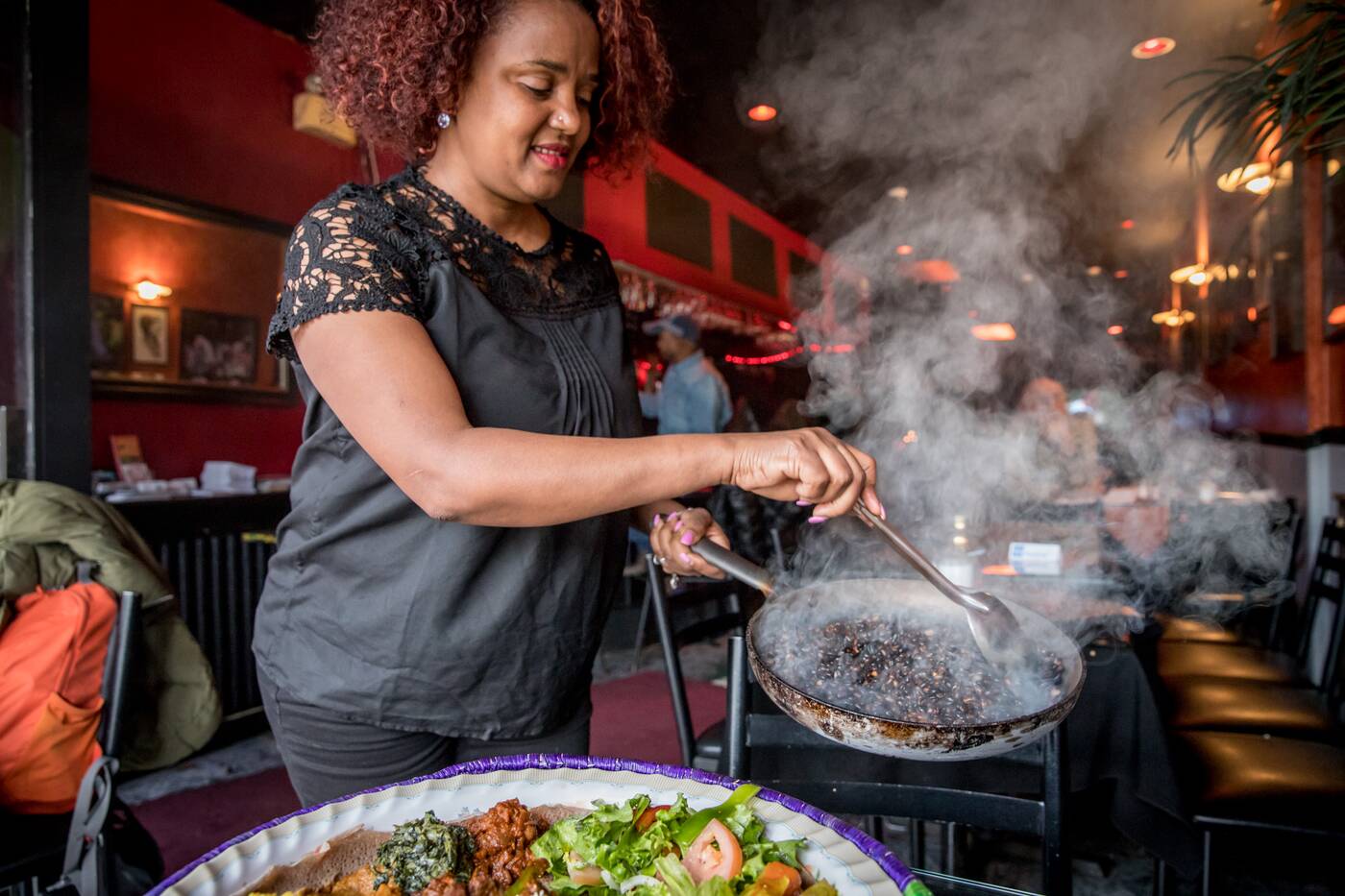 Rendez-Vous was the first Ethiopian restaurant to arrive on Danforth East in 2001.

The aging area certainly has its fair share of diverse businesses, but few are more frequented than the collection of Ethiopian restaurants serving up kitfo and lounges full of couches – all which act as hubs for the the community where Amharic is the only language you’ll hear. 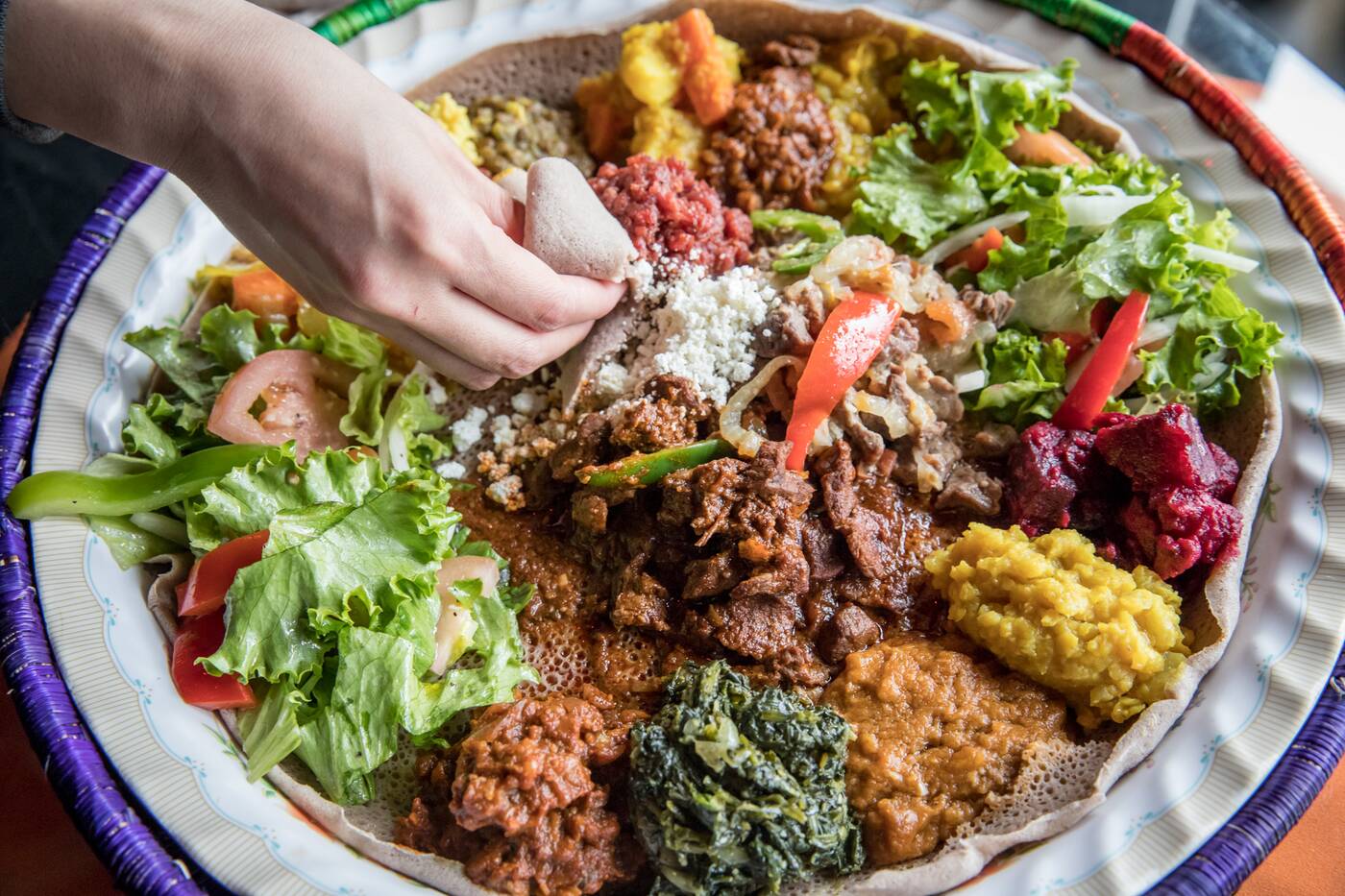 Ethiopian cuisine consists of stewed veggies, meats, and injera, a flat bread made out of buckwheat.

The first Ethiopian restaurant to arrive in the area was Rendez-Vous in 2001, back when Danforth East was still barren and Ossington was where the largest collection of Ethiopian businesses were, including neighbouring Lalibela, which still has its original location near there.

As per most Ethiopian establishments, Rendez-Vous came equipped with a TV playing the latest sports game and fully-stocked bar, and from its red-walled interior a community was born. 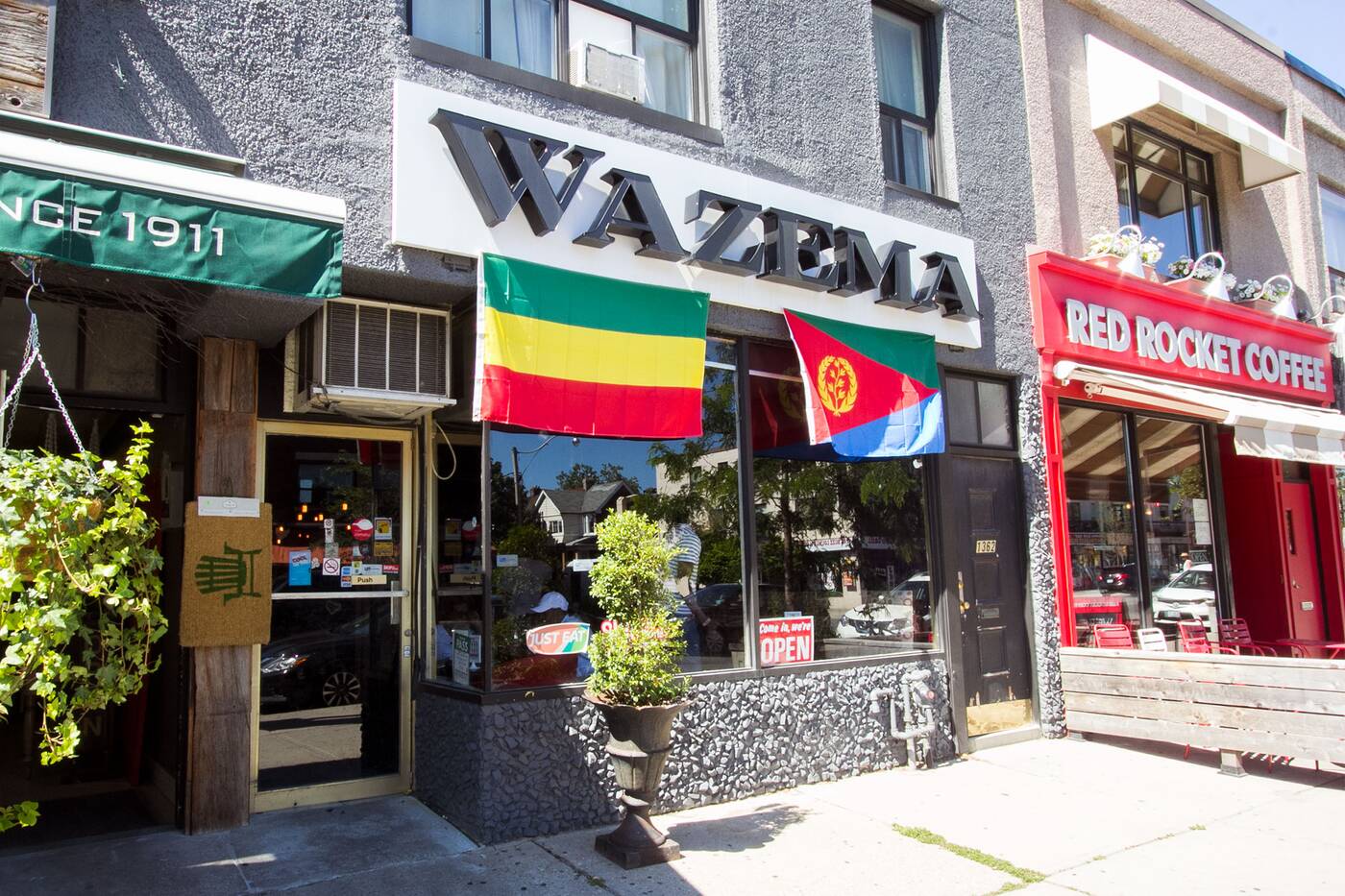 According to its owners, Wazema was the third Ethiopian restaurant to arrive in the area.

Since then other restaurants like Blue Nile – the second oldest restaurant here – Sora, and Wazema, a decade-old OG, have joined the area, turning this tiny walkable pocket into the home of some of Toronto’s best Ethiopian restaurants. 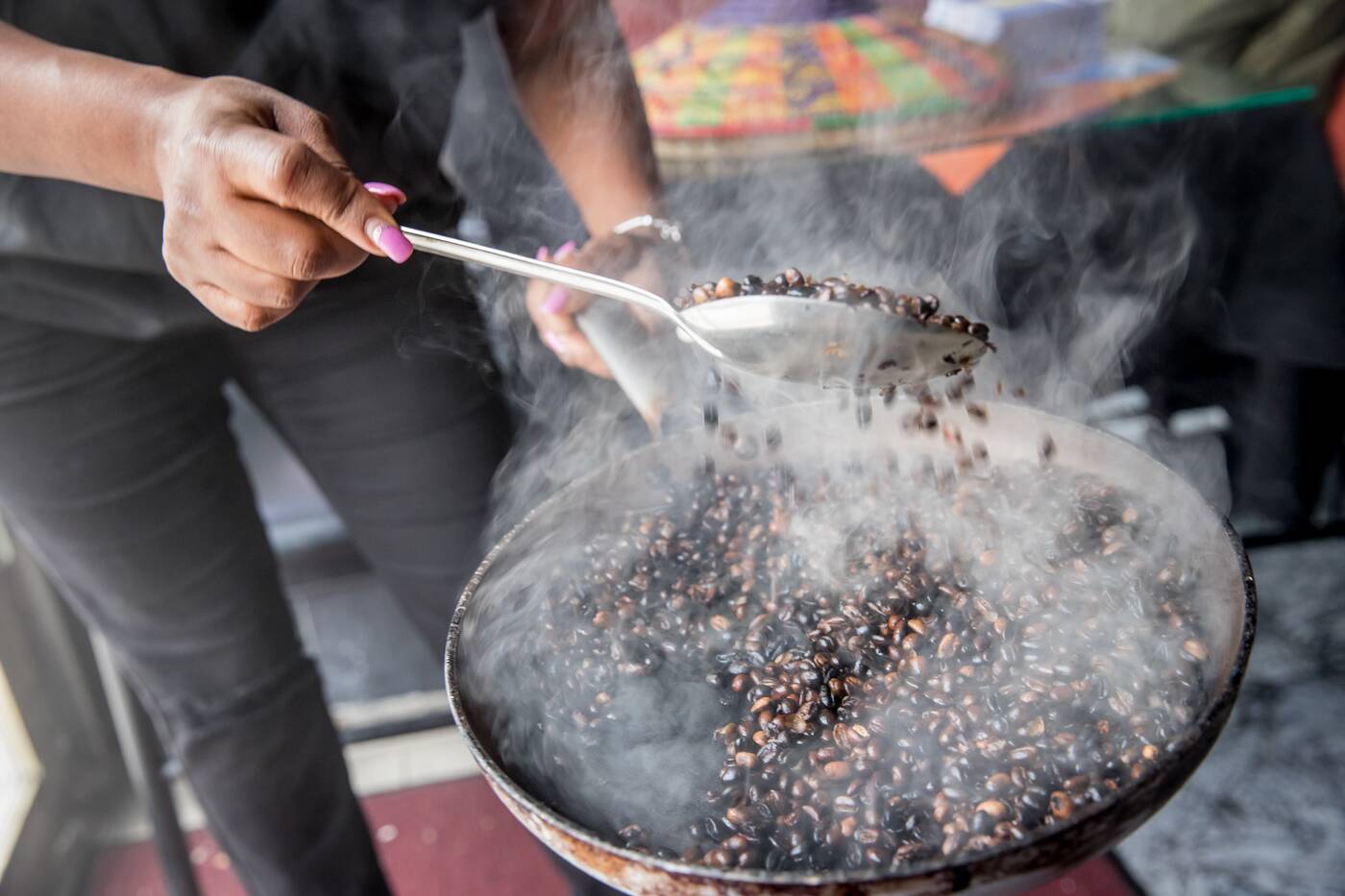 A pan of roasting coffee beans is brought out for drinkers to smell during an Ethiopian coffee ceremony. Photo by Jesse Milns.

Vegetarians will know that Ethiopian cuisine is one of the best for all those living the meat-free life. Vegandale might be all the rage right now, but people should really be flocking to Little Ethiopia for its healthy veggie stews and gluten-free injera. 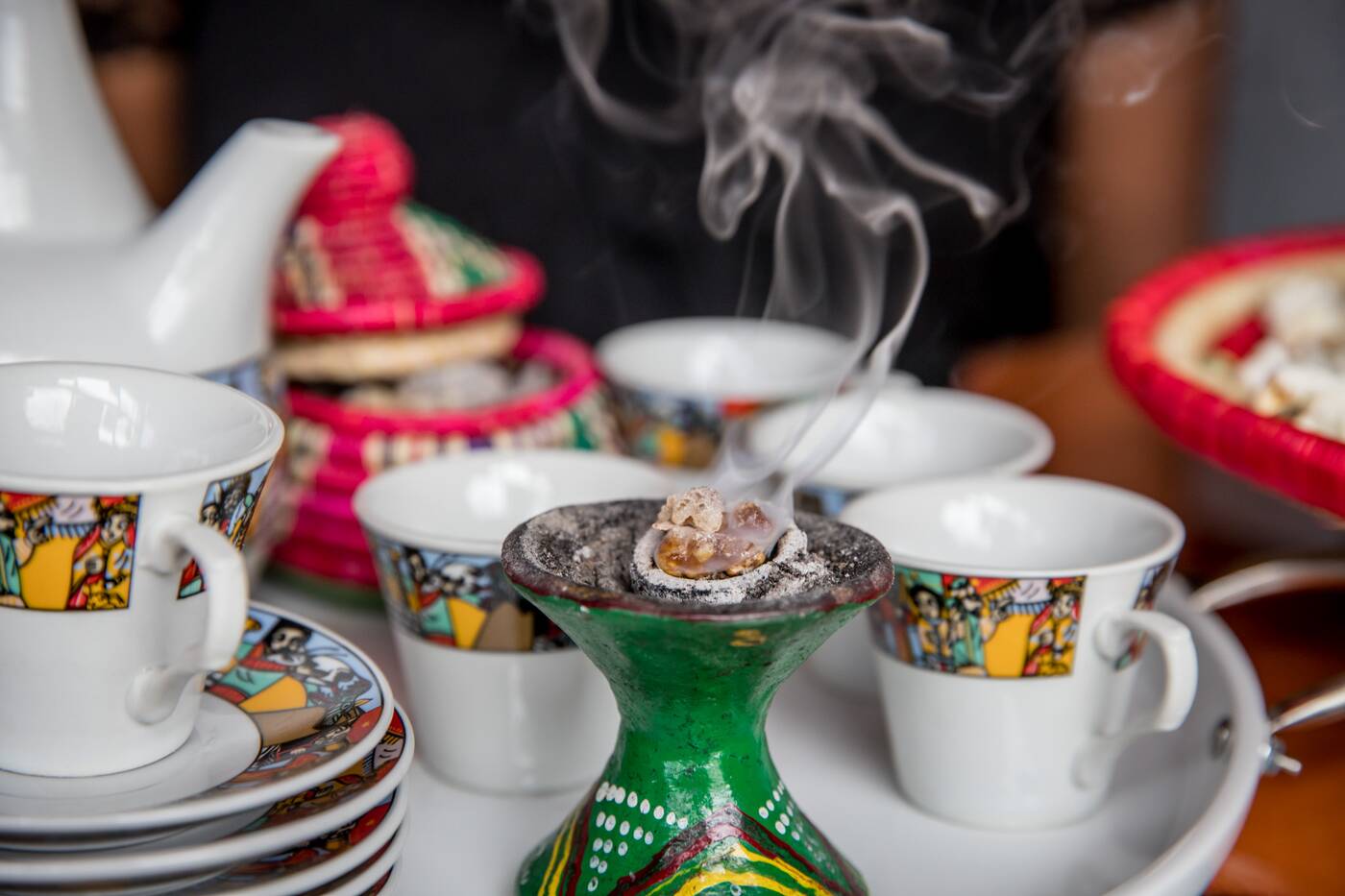 There are a number of non-Ethiopian cafes like Red Rocket where you can get your caffeine fix, but if you’re a true coffee lover and have time to spare, the real move is ordering an Ethiopian brew from any restaurant in this area. 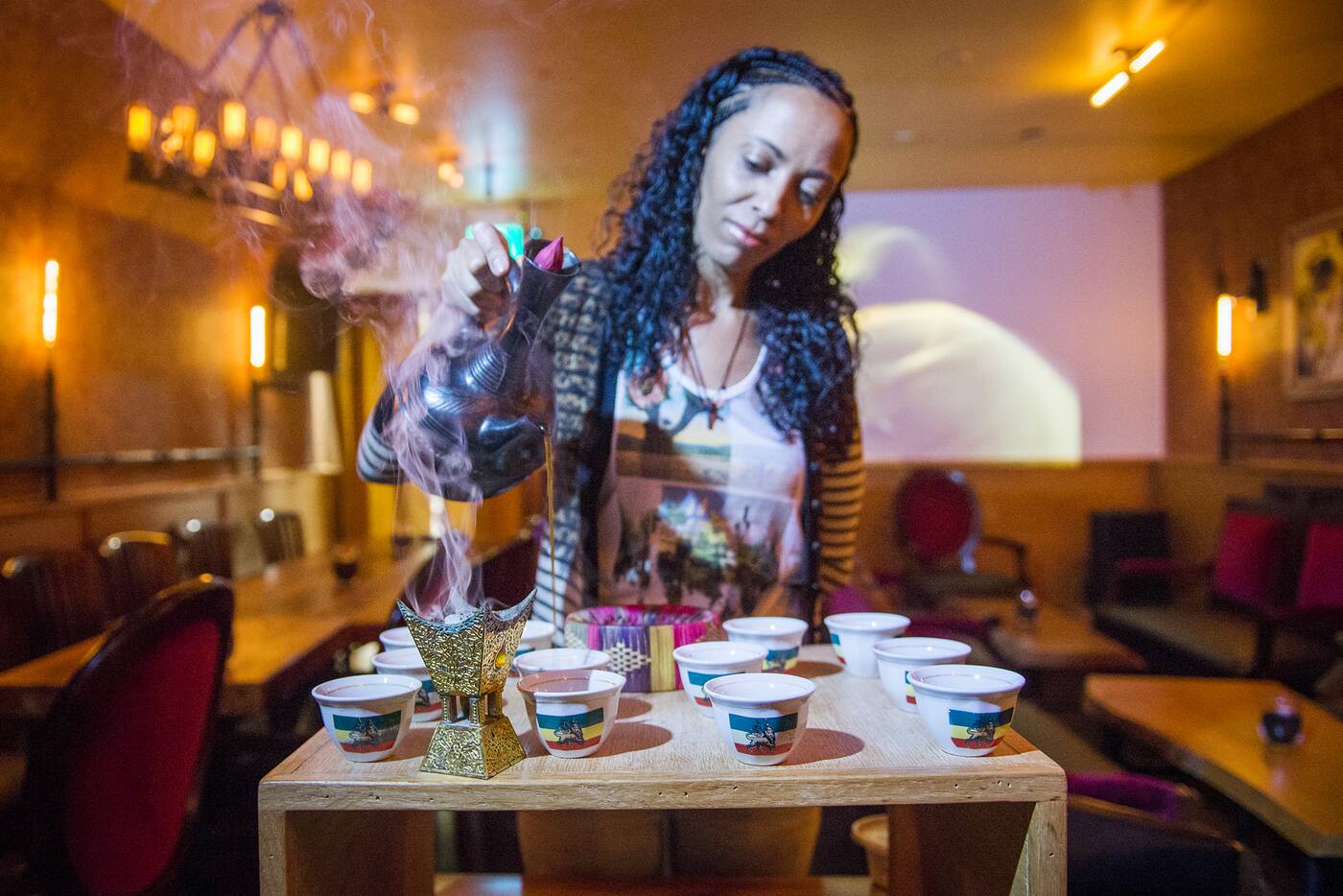 The server of Blue Nile will pour your Ethiopian coffee into small cups. Photo by Hector Vasquez.

Ethiopian coffee comes with a full ceremony, complete with roasting beans presented to you in the pan, burning myrrh, freshly popped popcorn and a full pot of dangerously strong brew for an experience that's really one-of-a-kind. 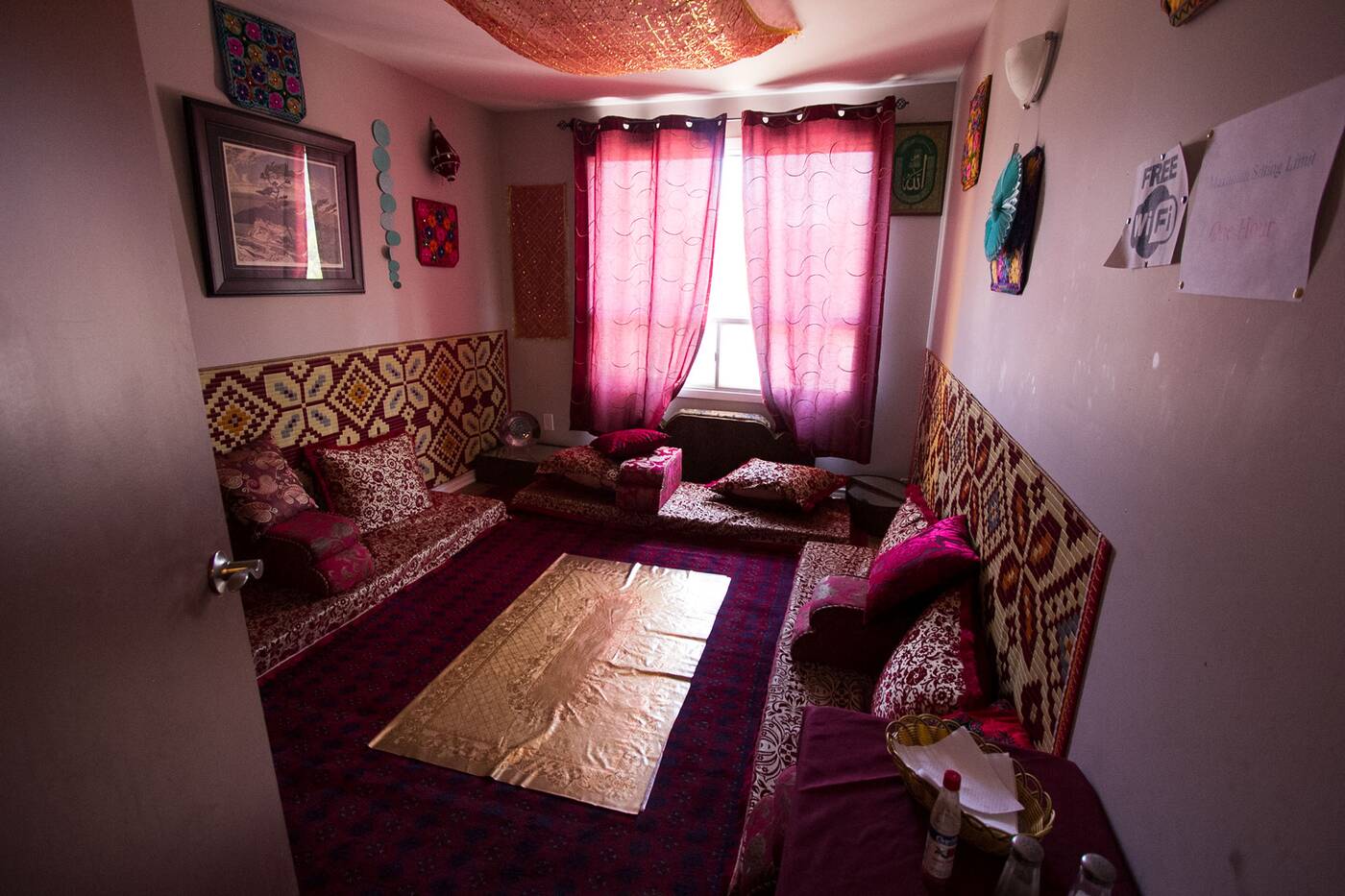 If you're looking for something fun to do, Al Mandi has private rooms upstairs designed in the plush decor and colourful tones of traditional Yemeni dining areas decked out in cosy cushions for on-the-floor dining. 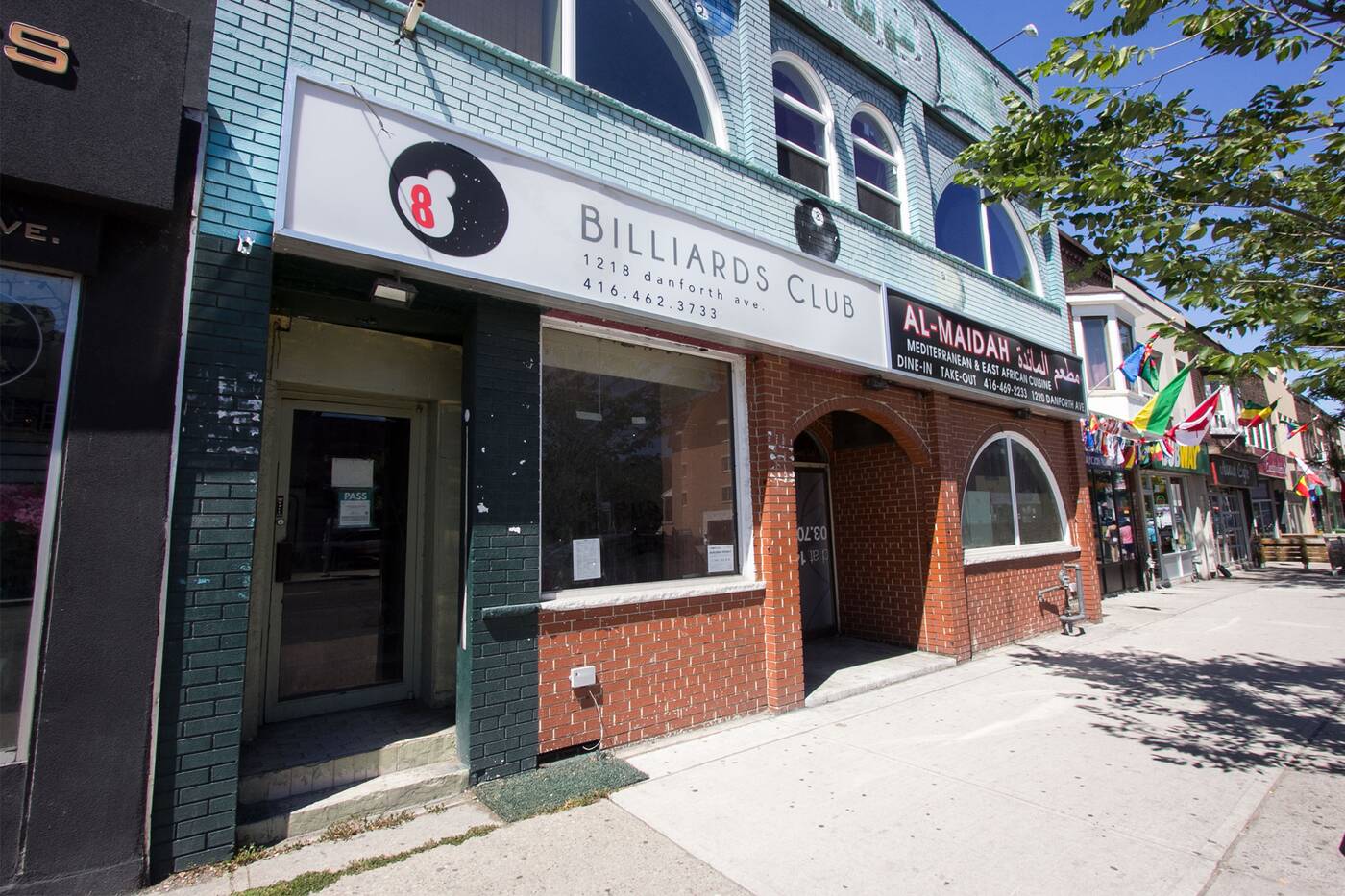 East African-run businesses like the Billiards Club and Al-Maidah have closed down.

Within the last five years or so, the neighbourhood has lost several East African-run businesses, accompanied by the appearance of businesses which are neither African, Asian, or even Greek, as the area historically warrants. 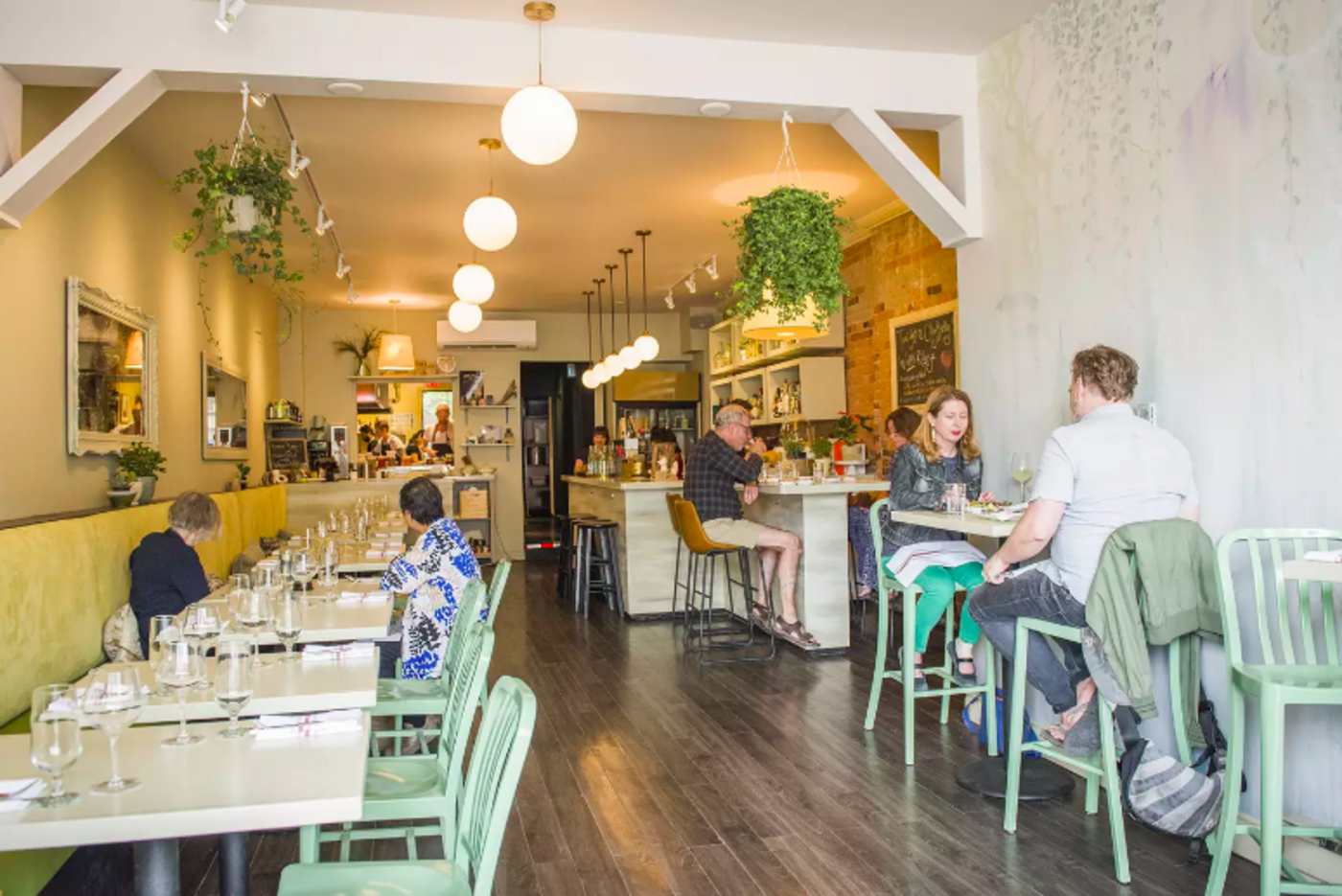 The brand new City Betty has just opened up with a produce-heavy menu full of locally-sourced-ingredient recipes like poached asparagus, citing California and American cities like New York as its inspirations. 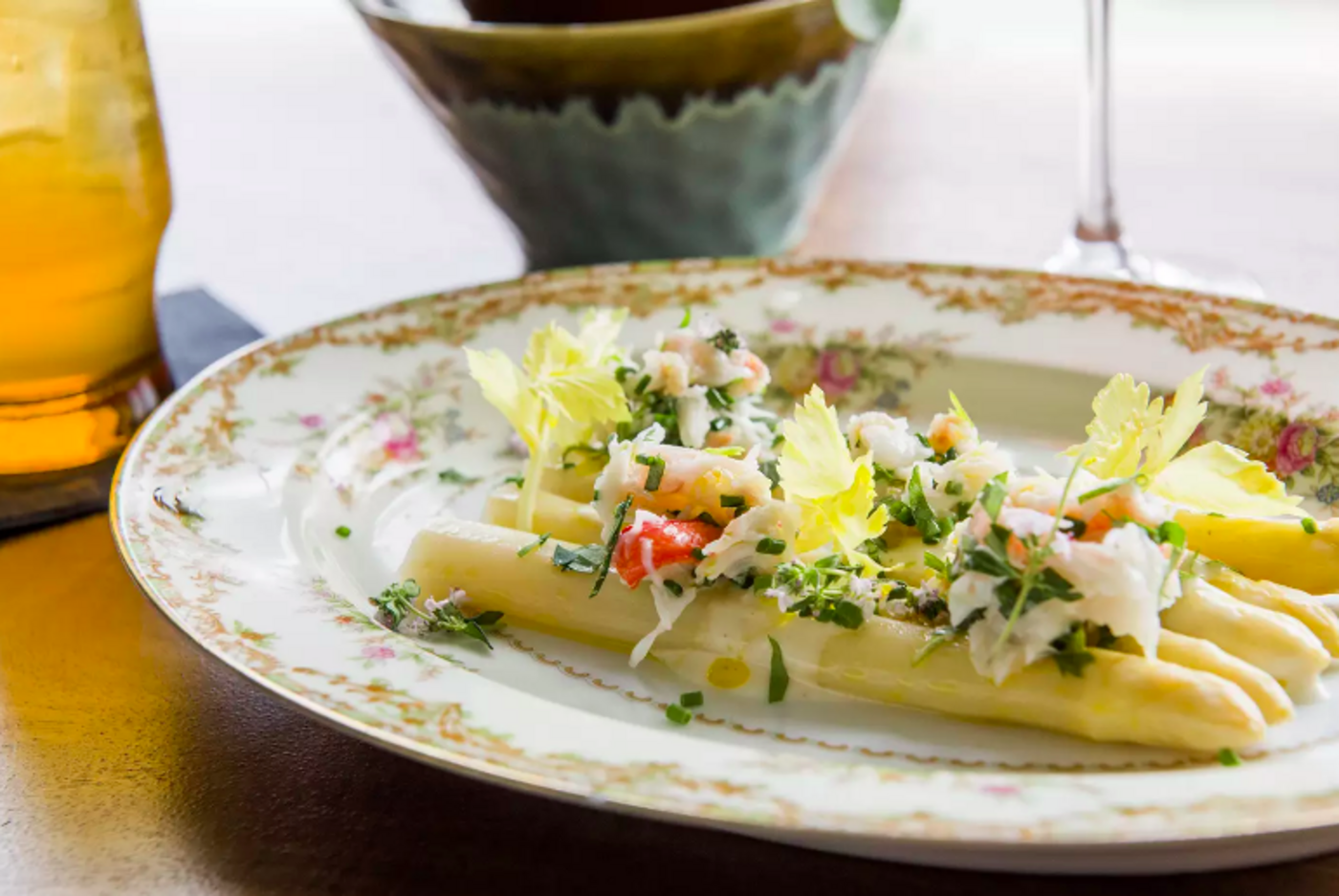 The snack bar Borrel is bringing a taste of the Netherlands with menu options like the frikandel, a Dutch-style hot dog, and right next door to it Sweet Serendipity bakes up very Canadian treats like maple butter tarts. 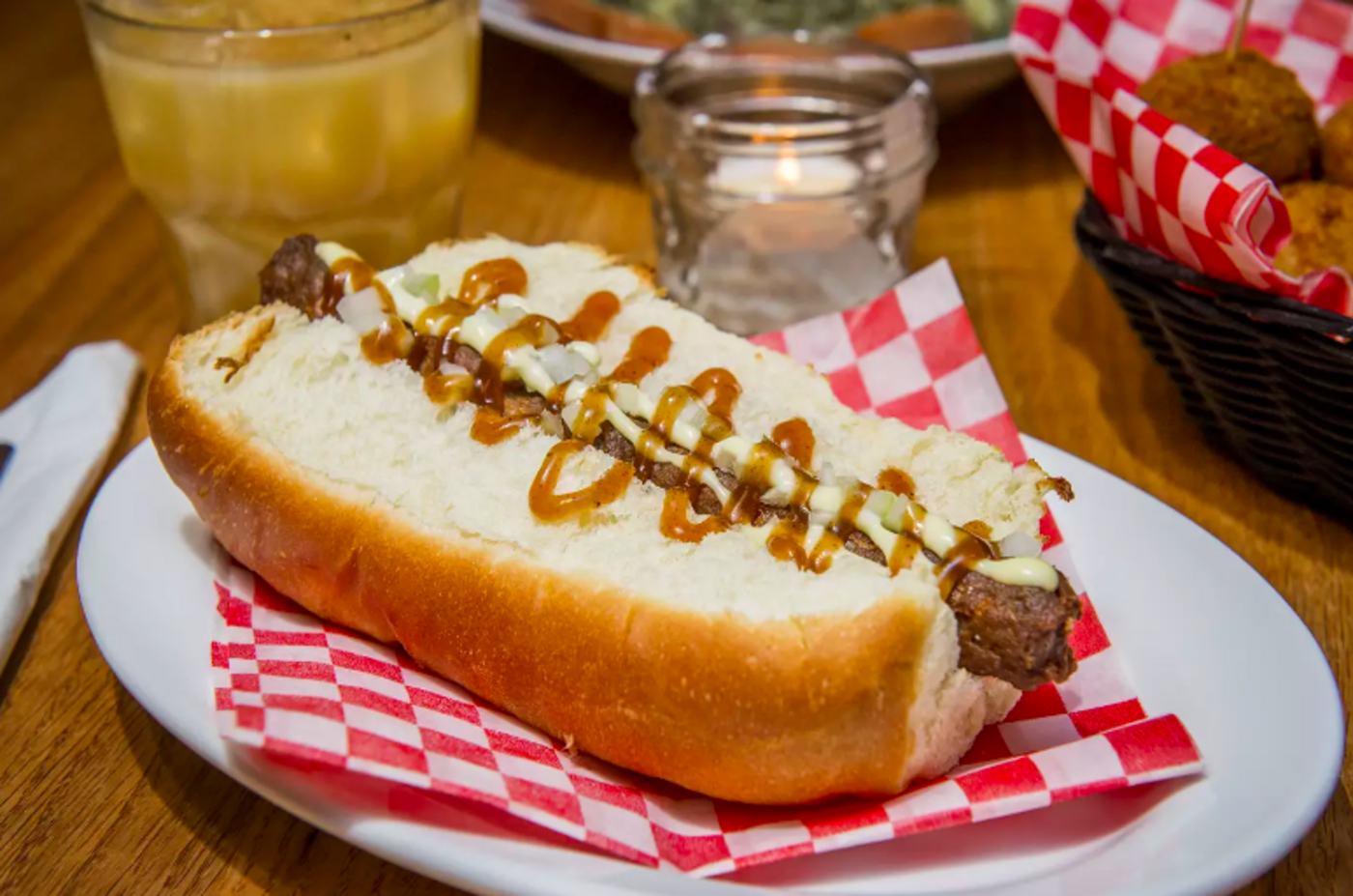 Borrel is a Dutch snack bar serving food from the Netherlands. Photo by Hector Vasquez.

And there's no shortage of newer watering holes here, from the old-timey saloon The Wren to the slightly older Sauce on the Danforth, which was the first bar to make an appearance in Little Ethiopia.

But despite what seems like multiple closures of African-run businesses in the area, there's still signs of new entrepreneurship like the newly opened Merhaba Bar & Cafe, where both Ethiopian and Eritrean flags hang proudly outside. 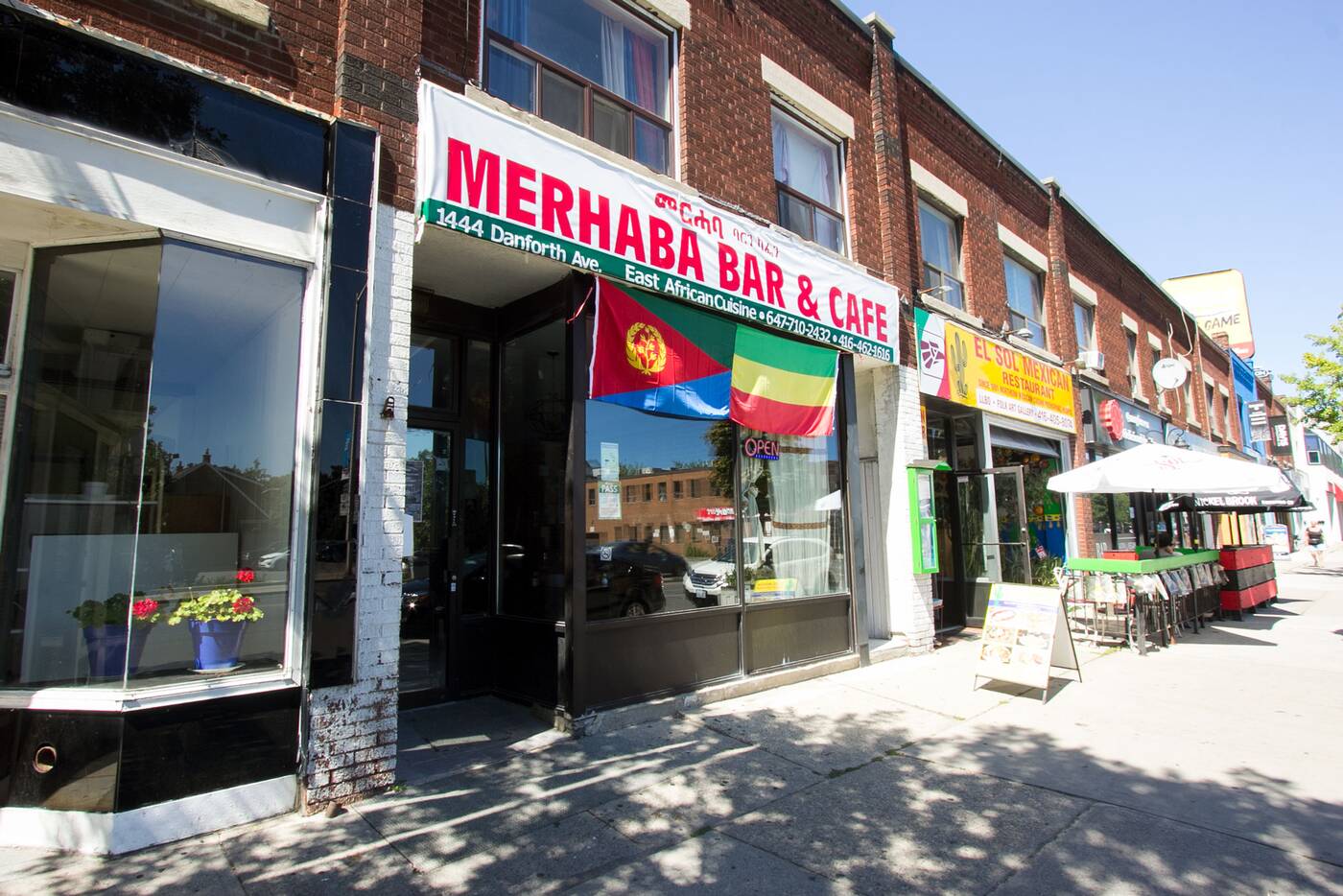