The top 30 Indian restaurants in Toronto by neighbourhood

Indian restaurants in Toronto have competition by the hundreds, but you can almost always depend on these spots to do samosas, chana and masala right.

Here are my picks for the top Indian restaurants by neighbourhood in Toronto.

Serving up the best of its namesake, Roti Cuisine of India has a big selection of roti and a variety of curries, meats, and veggie options — all served in a super lowkey space on Dupont.

The white table cloths at The Copper Chimney will probably look a little saucy when you’ve finished your meal. A comfy hole-in-the-wall, this spot feels like a best kept secret with amazing sizzling plates and affordable prices.

Unique cocktails and trolley food delivery, street-style, are all part of the experience at Indian Street Food Co. Presentation here is half the fun, as are dishes like the Kerala beef sandwich on a burger bun.

Cinamon is a little Queen East hang with a comfortable yet fancy interior with good lunch specials. They have a variety of curries like Goa-style vindaloo and even British-style curry on offer.

The Banjara by Christie Pits remains on the list of most well-known spots for a casual butter chicken in the city. 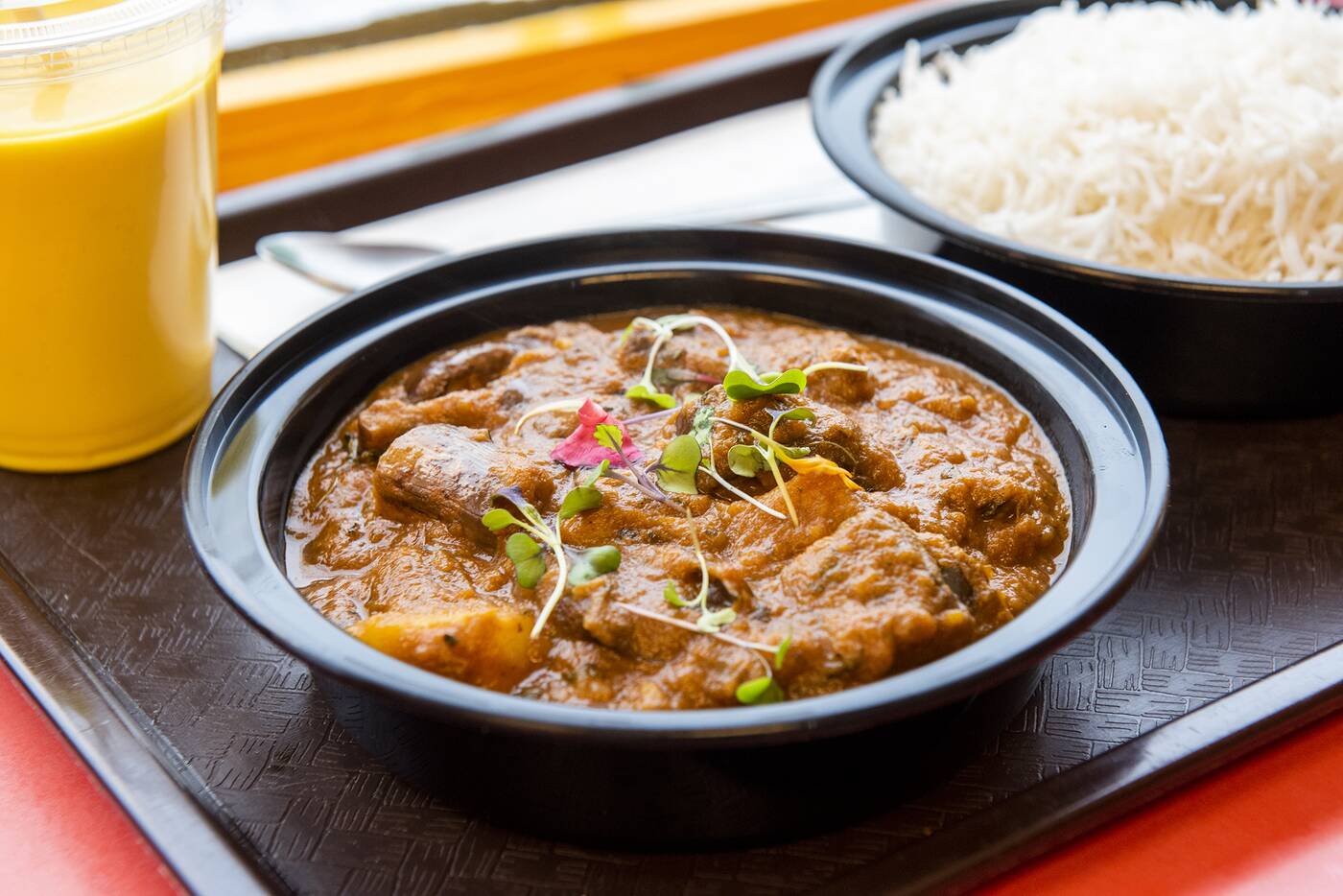 North Indian dishes are the specialty at Butter Chicken Factory, a pretty white-bricked walled restaurant that serves its tasty naan in baskets with checkered paper.

This original location of the Indian Roti House chain is the one that started it all. Butter chicken rotis and biryani orders are usually taken to go, but as a sign on the wall insists, they've got a little more heart than your regular "fast food restaurant."

Sher-E-Punjab is a longtime favourite of the Danforth. The place has been cooking up northern Indian staples like tandoori chicken, matar paneer, and aloo gobi in the area since 1975.

The homey Cumin Kitchen is a versatile spot, befitting for date nights and casual takeout alike. Presentation is definitely a forte here, as are their naans and palak paneers. 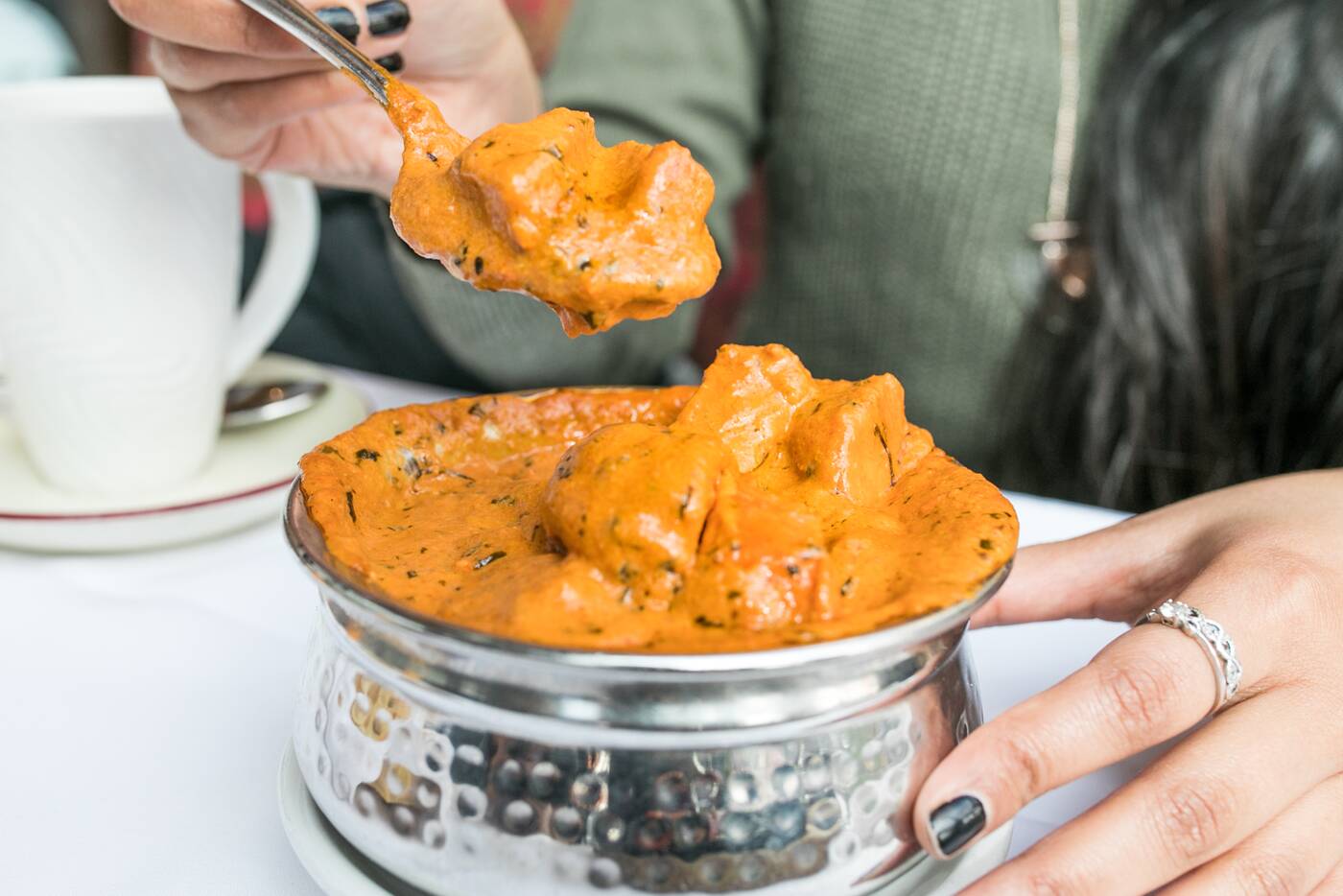 Banjara is one of the city's favourite spots for butter chicken. Photo by Fareen Karim.

Located at Shops at Don Mills, Mantra is yet another project from the Indian hospitality group behind stalwarts like The Host. Towering ceilings and a 360-degree bar coupled with weekend high tea and tandoor wings is definitely worth a special outing.

The Great Maratha is a local favourite for curries and meat skewers. Don't expect anything fancy, but do expect the meals here to hit the spot.

Aanch is an upscale endeavour with a modern menu of rosemary-spiced naans and a really delicious paneer tikka masala.

Despite what its name implies, Brar Sweets doesn't only deal in Indian desserts, though they do that well, too. This hot table is known for their affordable and tasty thalis. Bestsellers include malai kofta and chana bhatura.

The takeout counter Matha Roti has a deceptively run-of-the-mill exterior but don't be fooled — their deliciously spicy eats include East Indian-style roti and biryani, all made from scratch. 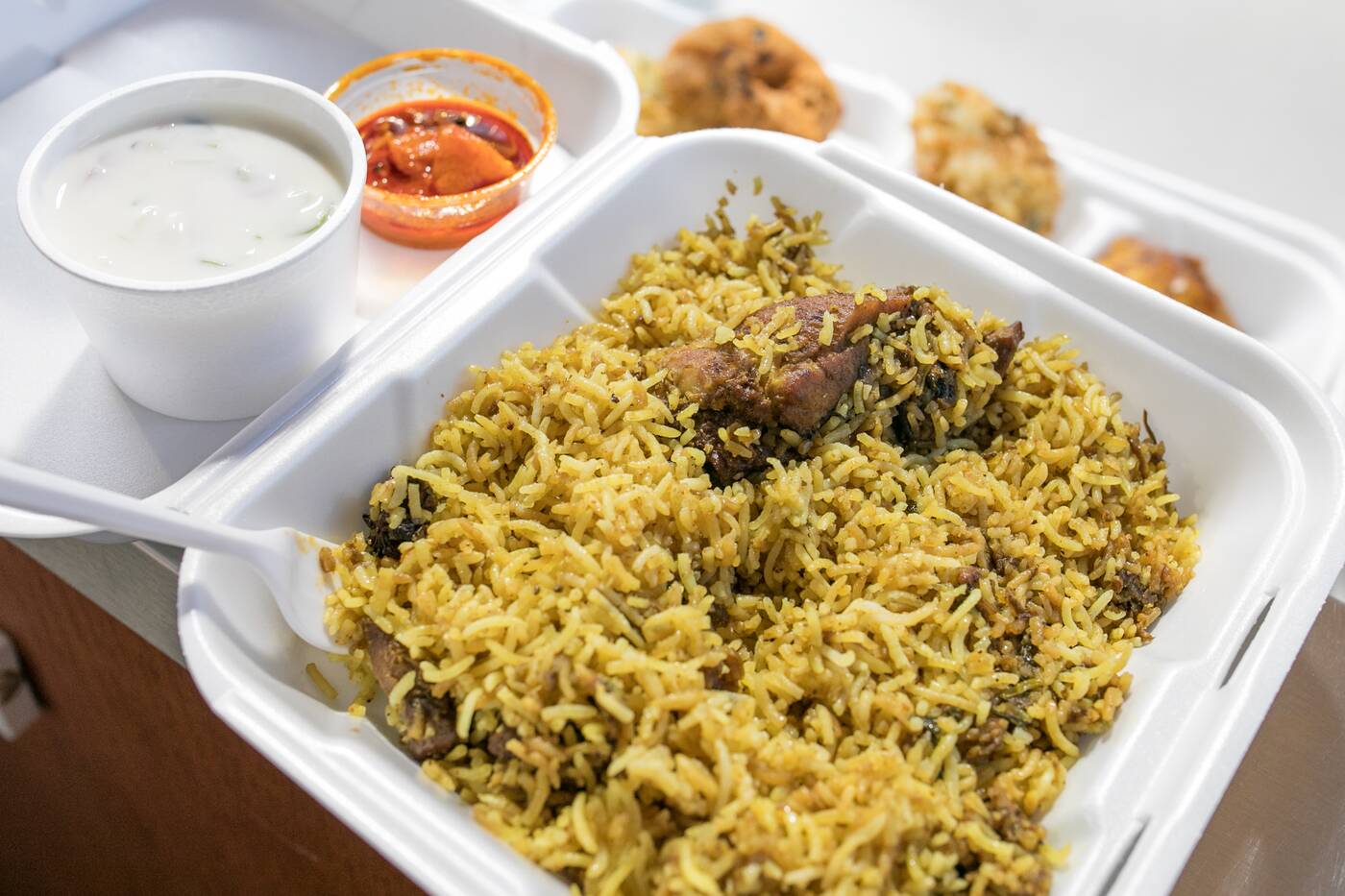 Mr. John's is the ultimate spot for Keralese eats in Scarborough. Photo by Fareen Karim.

It may be tiny but Indilicious is serving up big flavour. The restaurant is helmed by a chef from Kolkata with more than 17 years of international experience, plus they do cocktails.

Chadani is a casual Indian joint is a bustling spot for lunch buffets. Weekdays bring in the lunch crowds while weekends are a hodgepodge for all lovers of northern Indian fare.

The name 6ix Triangles might lead some to believe this spot specializes in, maybe, samosas, but it's really known for butter chicken. Find it on the restaurant row of Jefferson Avenue.

Step downstairs in the basement that is Udupi Palace, a restaurant that completely makes up for its lack of ambiance with unreal vegetarian meals like chana bhatura and vegan dosas.

Head to Goa Indian Farm Kitchen for eats from the coastal state of India. You'll find this chandelier-bedazzled restaurant tucked inside Bayview Village. 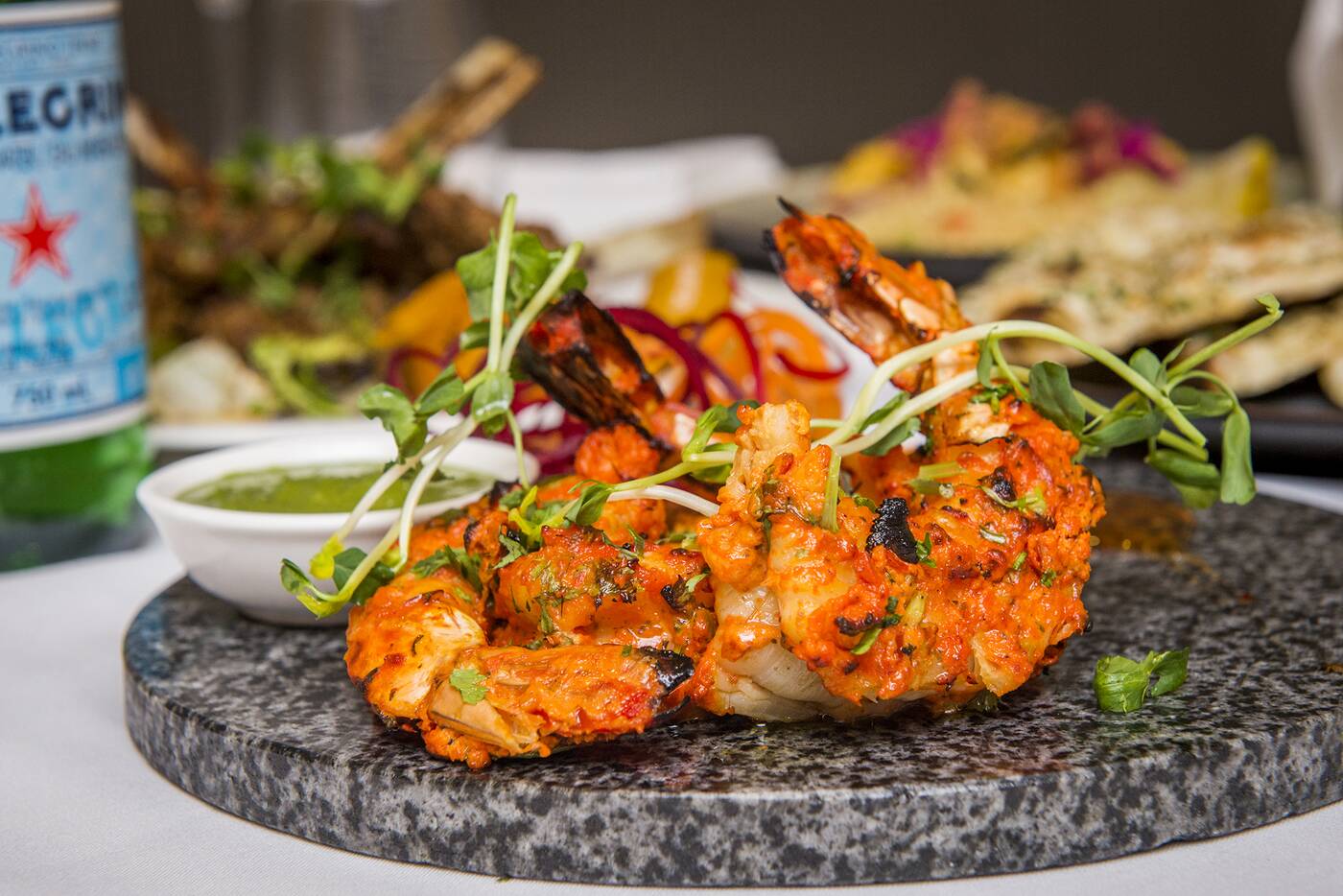 The roti and dosas at Glory of India are notoriously good, and their thali meals are always generous. The best part – it’s super cheap.

Whether you’re a first-timer or a longtime fan, it’ll never cease to amaze you how full you can get at Little India's lunchtime buffets, which, sadly, are temporarily shut due COVID-19 safety measures but you can still order take-out.

Indian Spice Room serves vegetarian homestyle dishes from Northern and Southern India courtesy of a chef with more than 20 years of cooking experience.

Like a phoenix from the ashes, the beloved dosa restaurant South Indian Dosa Mahal has risen from a literal fire at its Bloor store to bring us a second location on Roncy. 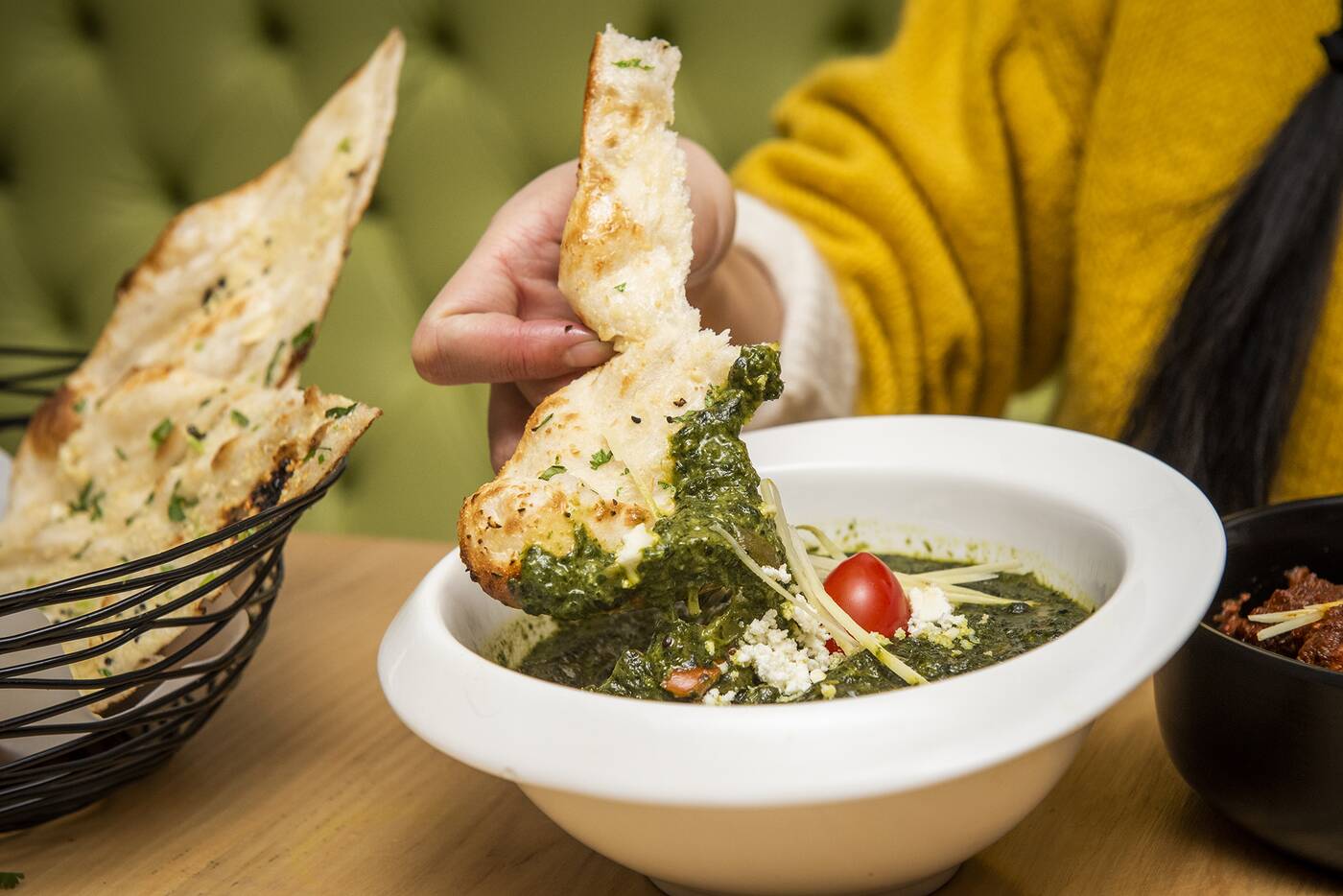 Indulge in all eats Malayalee at Mr. John's Kerala Kitchen. The same brand behind one of North America's most famous plantain and cassava chip companies brings us a warehouse-style takeout counter for Keralese dishes such as nadan pork ularthiyathu.

For those passionate about wine and Indian food, Pukka has a wine program curated by the sommelier at Scaramouche to pair with classy twists on Indian dishes.

Naan and Chai does several classic mains found across South Asia, including butter chicken, but their specialty is definitely their traditional and fusion stuffed naans.

The best part about Bhoj Indian Cuisine is that you can choose your spice levels right off the bat, which is perfect for those who can't do spicy, and those who can't get enough.

Colaba Junction is an energetic spot where you order at the lunch counter and have your food brought to you. Focusing on a particular area in Mumbai with multiple cultural influences, dishes here are definitely unique: case and point the paneer lasagna.

The upscale Khau Gully is probably best known for its chicken dum biryani, a glorious rice dish that comes encased in naan that will definitely satisfy your Indian fare cravings.