Banjara is known as one of Toronto’s favourite Indian restaurants, serving some of the city’s best butter chicken and biryani.

Banjara is named for a nomadic Indian community, inspired by the variety of flavours they would encounter while travelling. 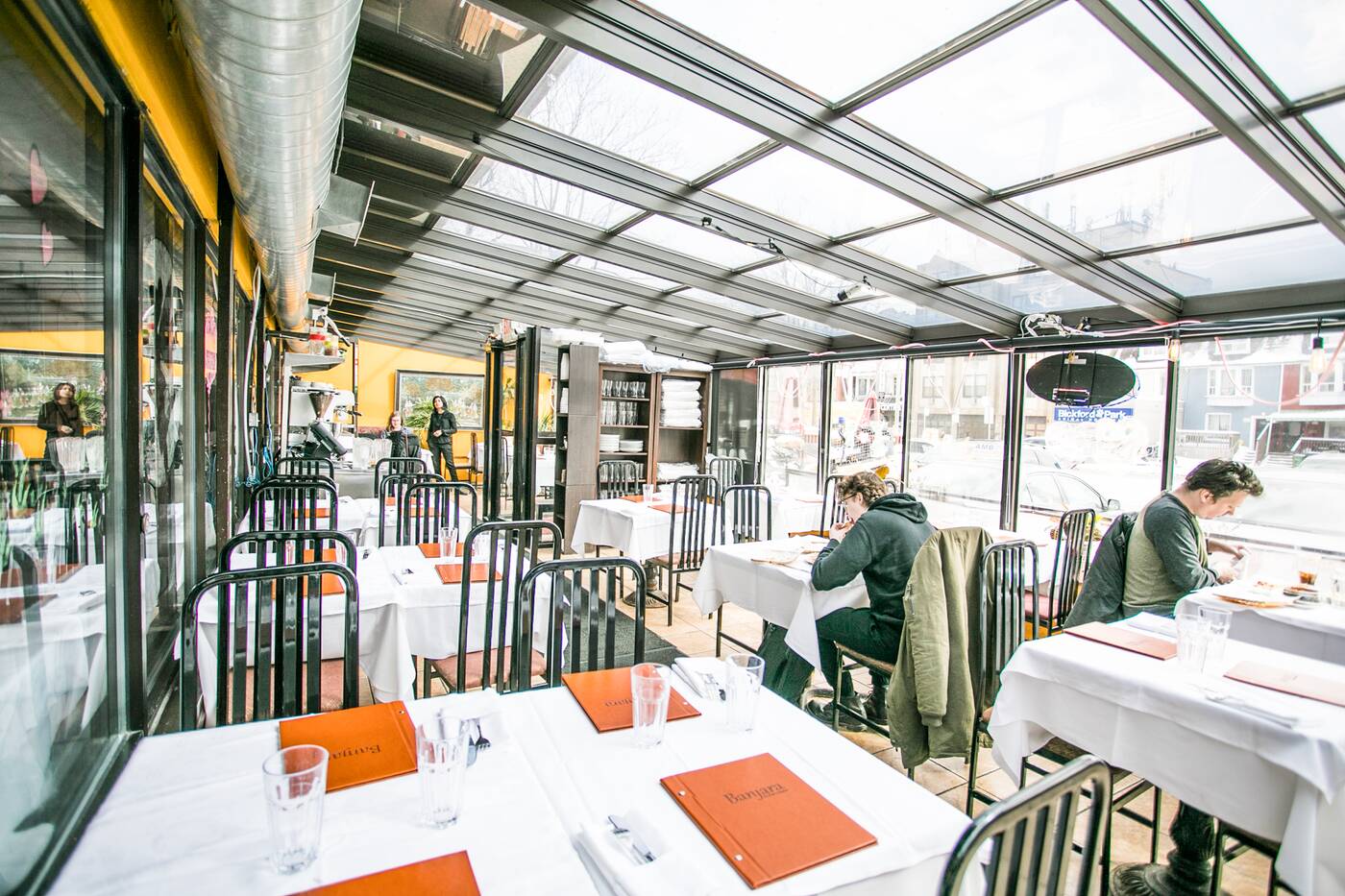 This location of this Banjara is quizzically situated right next to another Indian restaurant (there’s another on Eglinton). I’ve always loved the eccentric indoor/outdoor design of the interior here, a glassed-in front dining area affording plenty of natural light even when it’s too cold to sit outside. 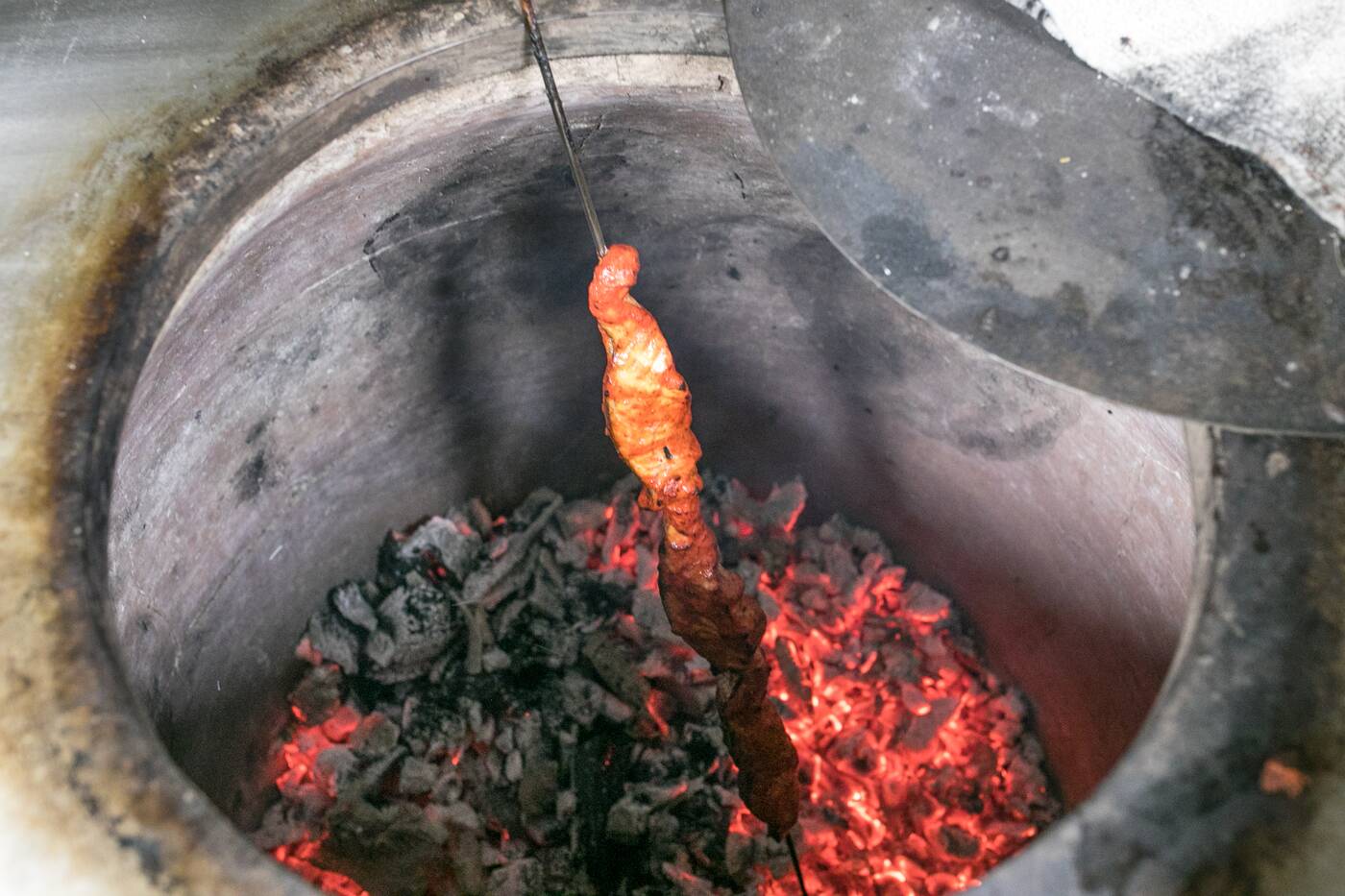 Famous butter chicken ($14.50) here starts out with chicken tikka cooked in the tandoor, white meat with all the fat cut off. 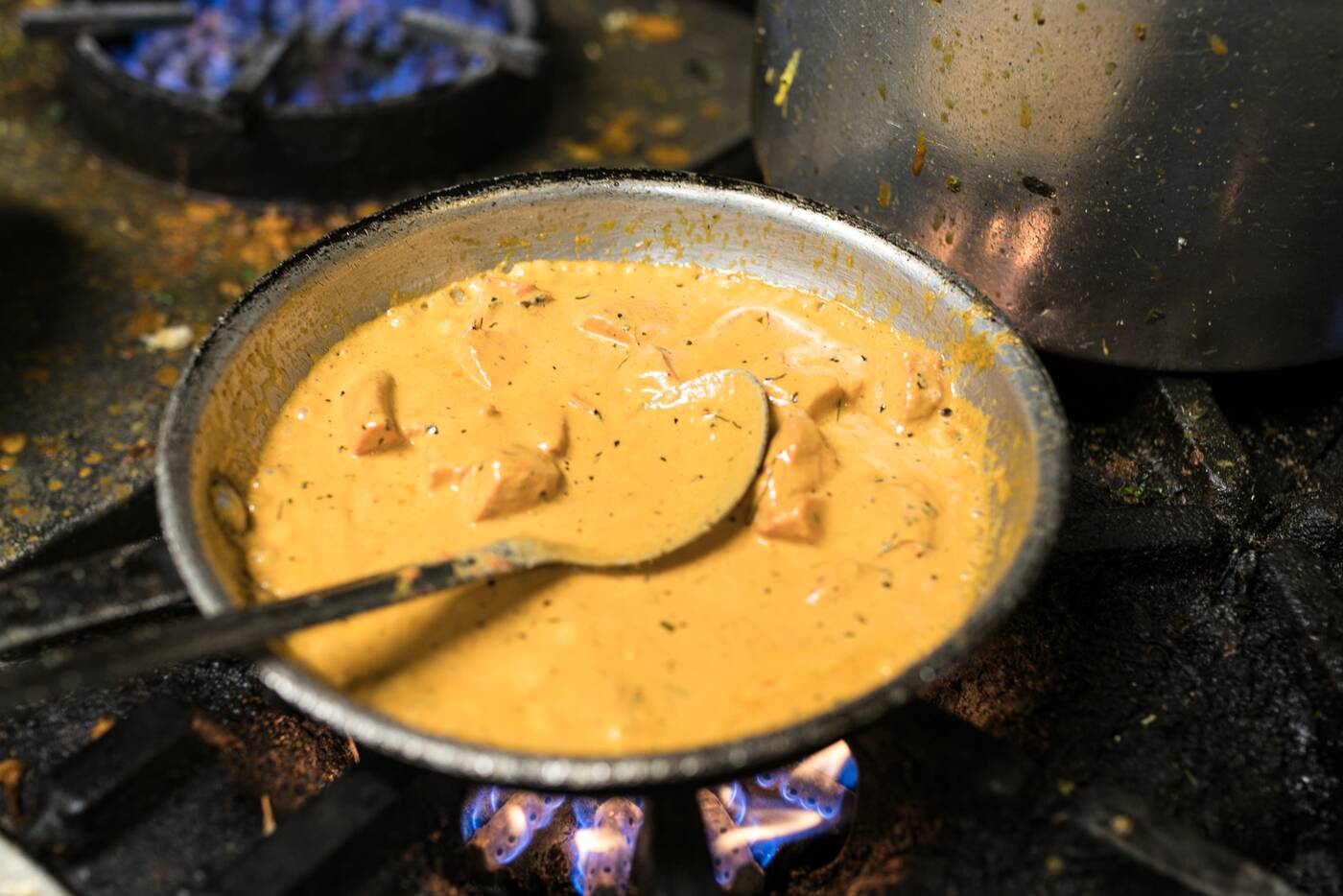 From there the chunks of meat are simmered in a creamy tomato gravy with their own house-ground blend of spices, all the sweetness coming naturally from the tomato with no additional sugar added. 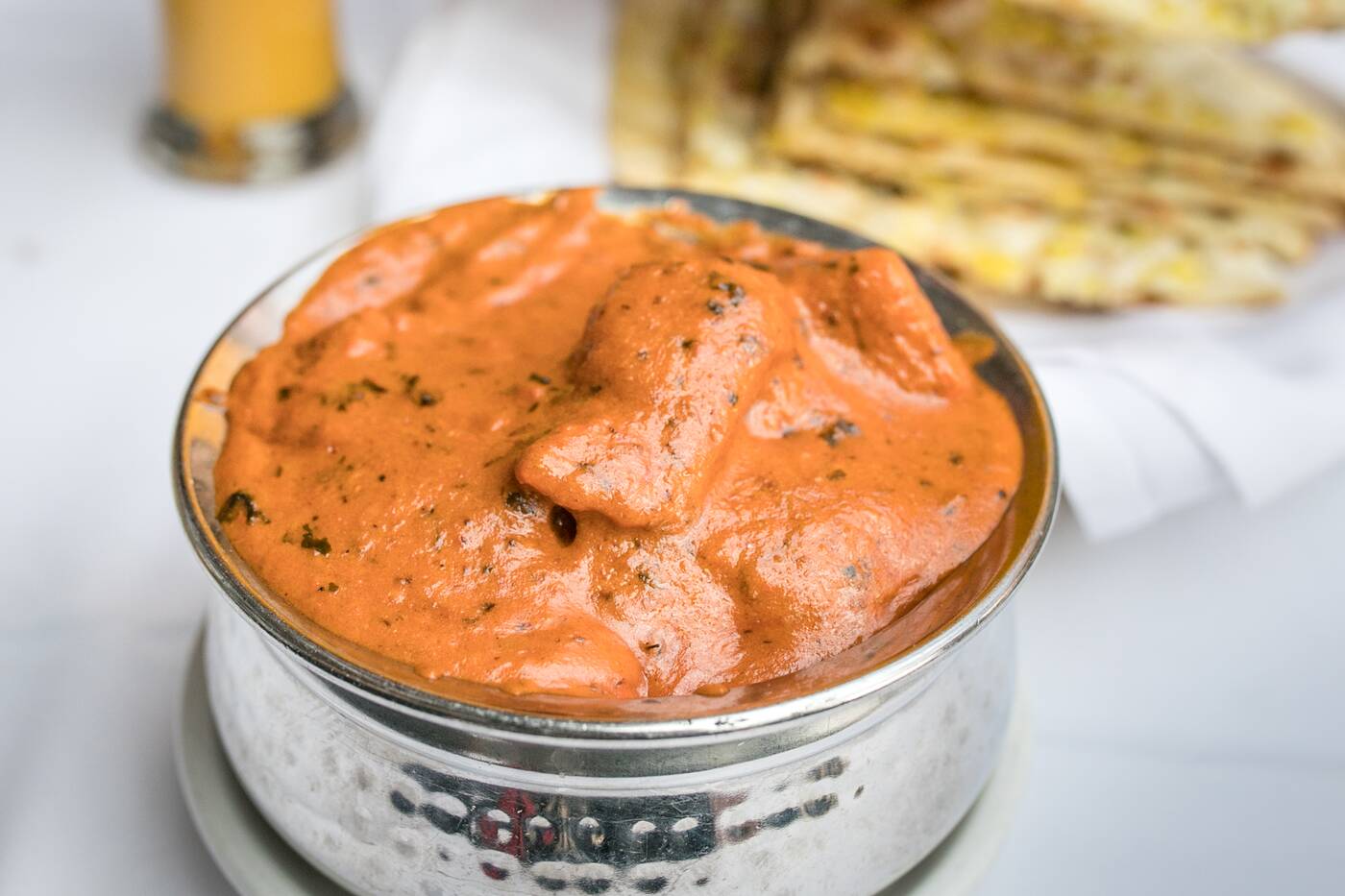 The result is the ultimate butter chicken, meat tender enough to shred just slightly, the gravy thick with a nice slightly grainy texture, warmly spiced, punchy, and flecked with seasoning. 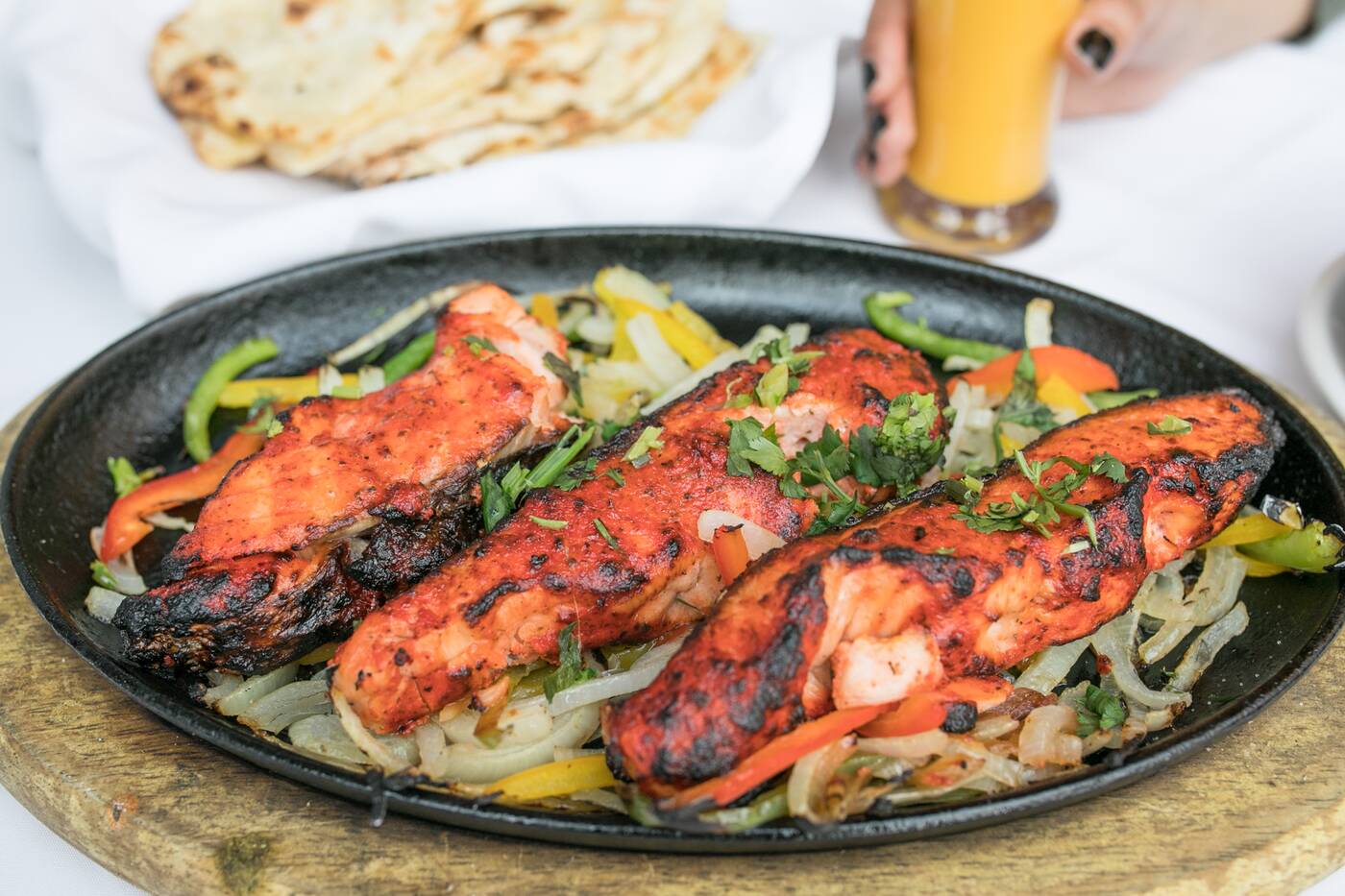 Tandoori fish ($15.99) is an order of three pieces of boneless salmon. All “tandoori sizzlers” are marinated overnight in garlic, ginger, lime juice and yogurt, cooked in the tandoor for a nice smoky charcoal flavour, and served in a sizzling skillet on a bed of onions and peppers.

With a delicate interior and a crispy exterior, there’s no overwhelming fishy flavour to this version of this dish. 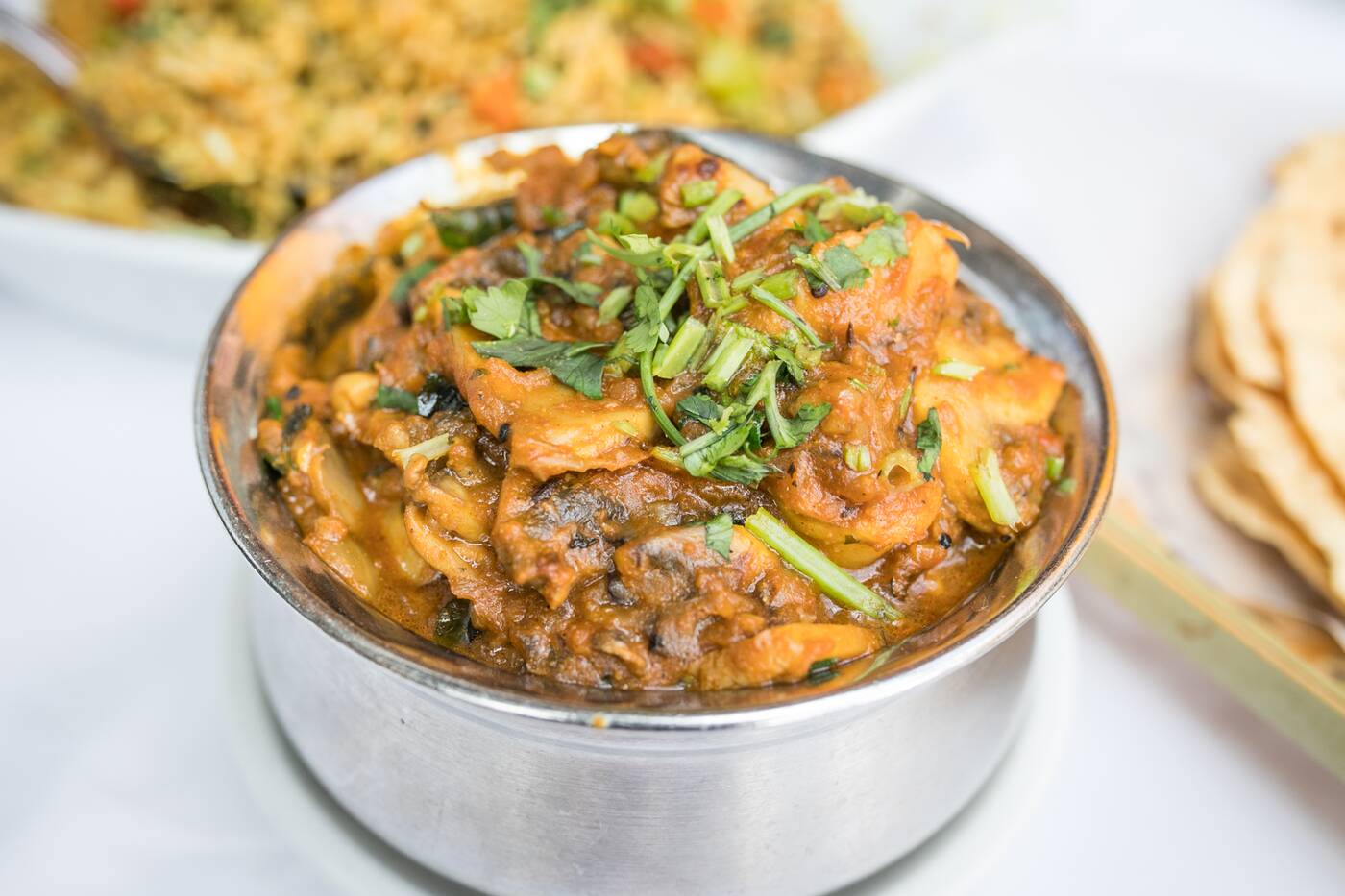 A mushroom curry ($11.50) is actually vegan, pretty non-traditional to Indian cuisine with cremini and shiitake mushrooms in a light onion and tomato gravy. 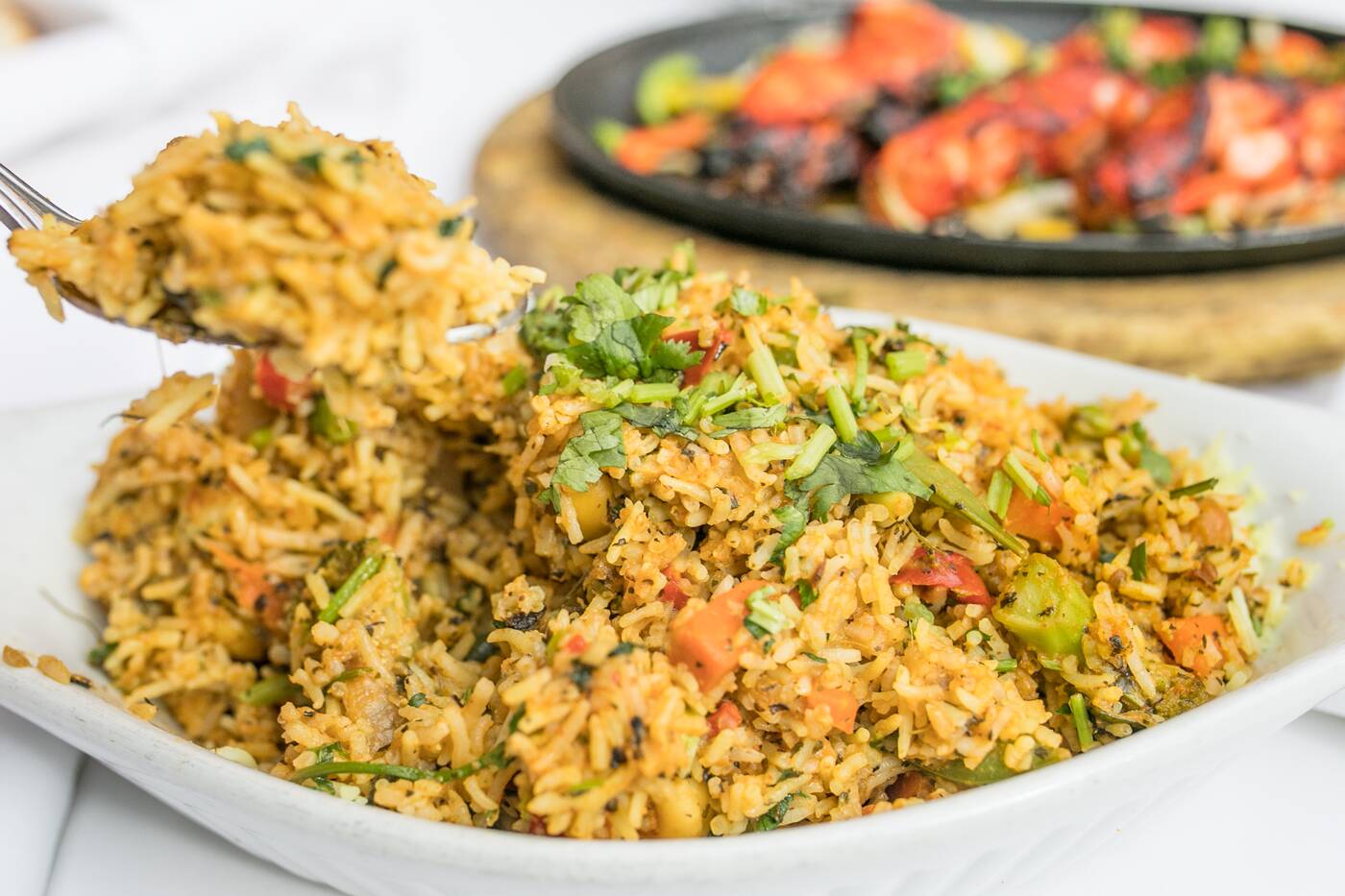 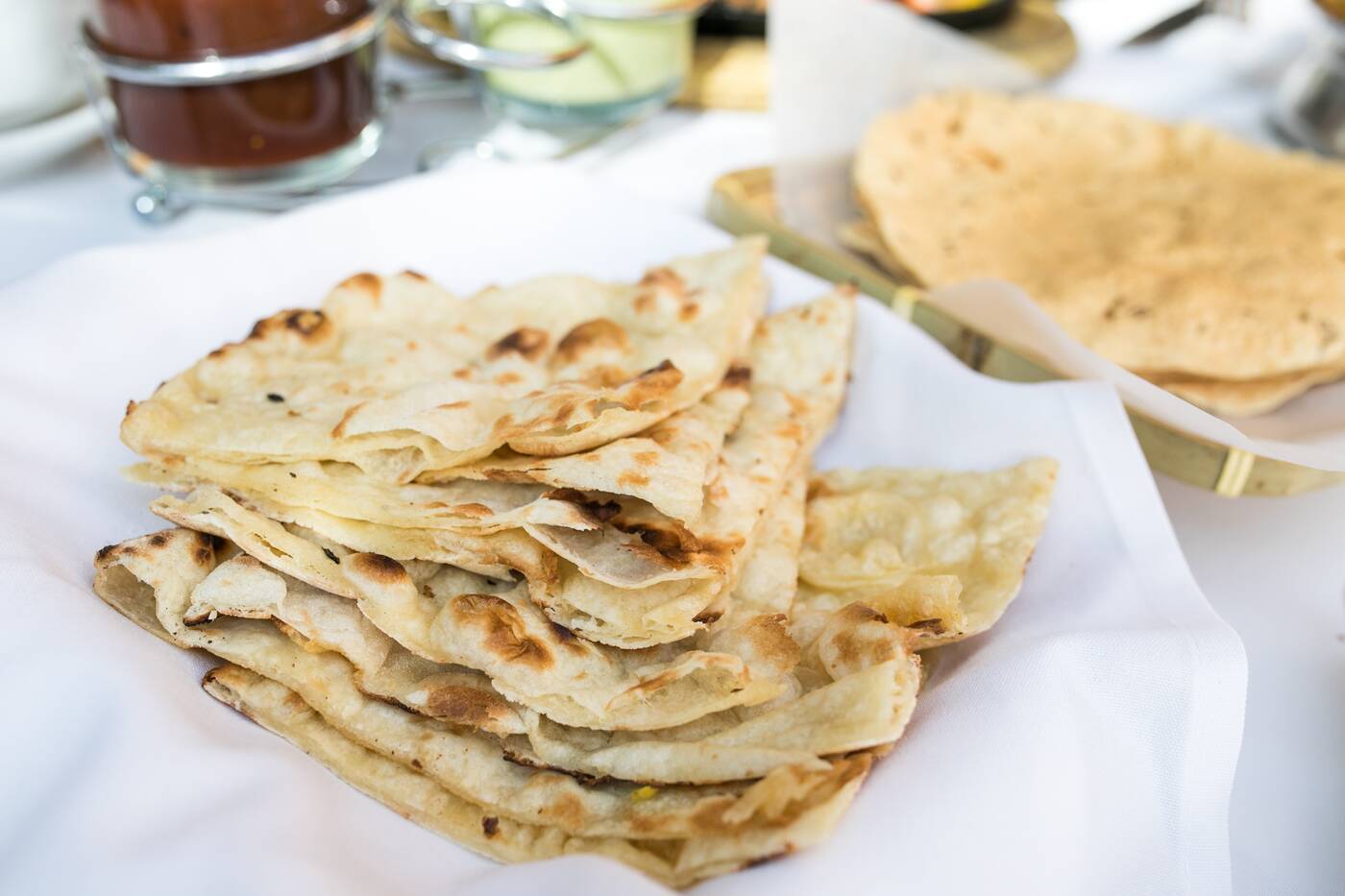 Soft, puffy naan are made with organic flour, eggs, milk, and honey for their signature touch of sweetness. Garlic naan ($3.99) get a double hit of powerful flavour from garlic in the dough and in a generous helping of butter brushed on top.

Papadum are actually complimentary at the beginning of every meal, placed on the table when you’re seated along with house condiments of tamarind cinnamon date sauce and mint cilantro yogurt. 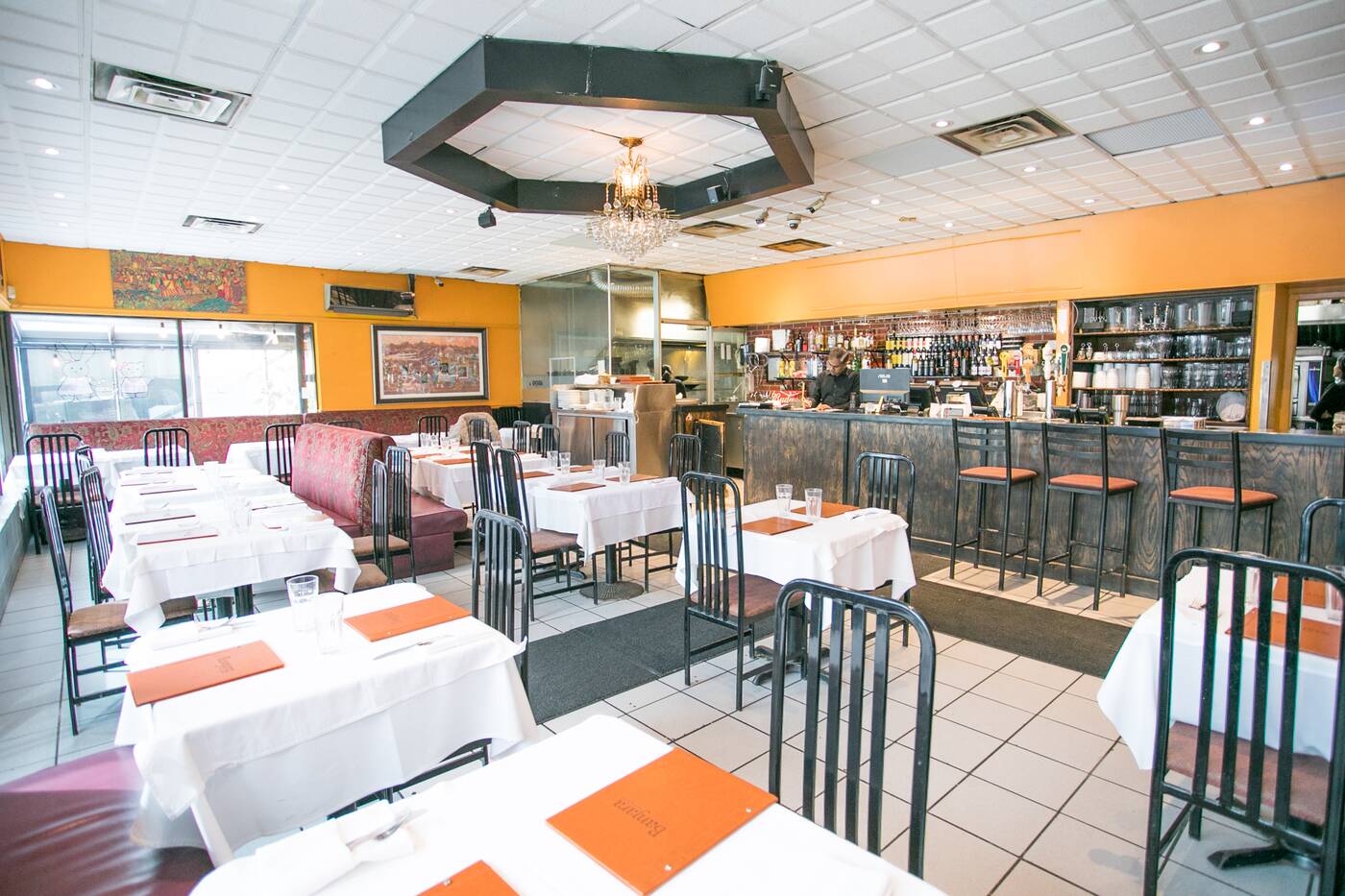 Chef Rajeswara Rao Veerella presides over the kitchen, some sophisticated touches like the shiitakes holdovers from his years spent in an Asian kitchen during his 40-year career. 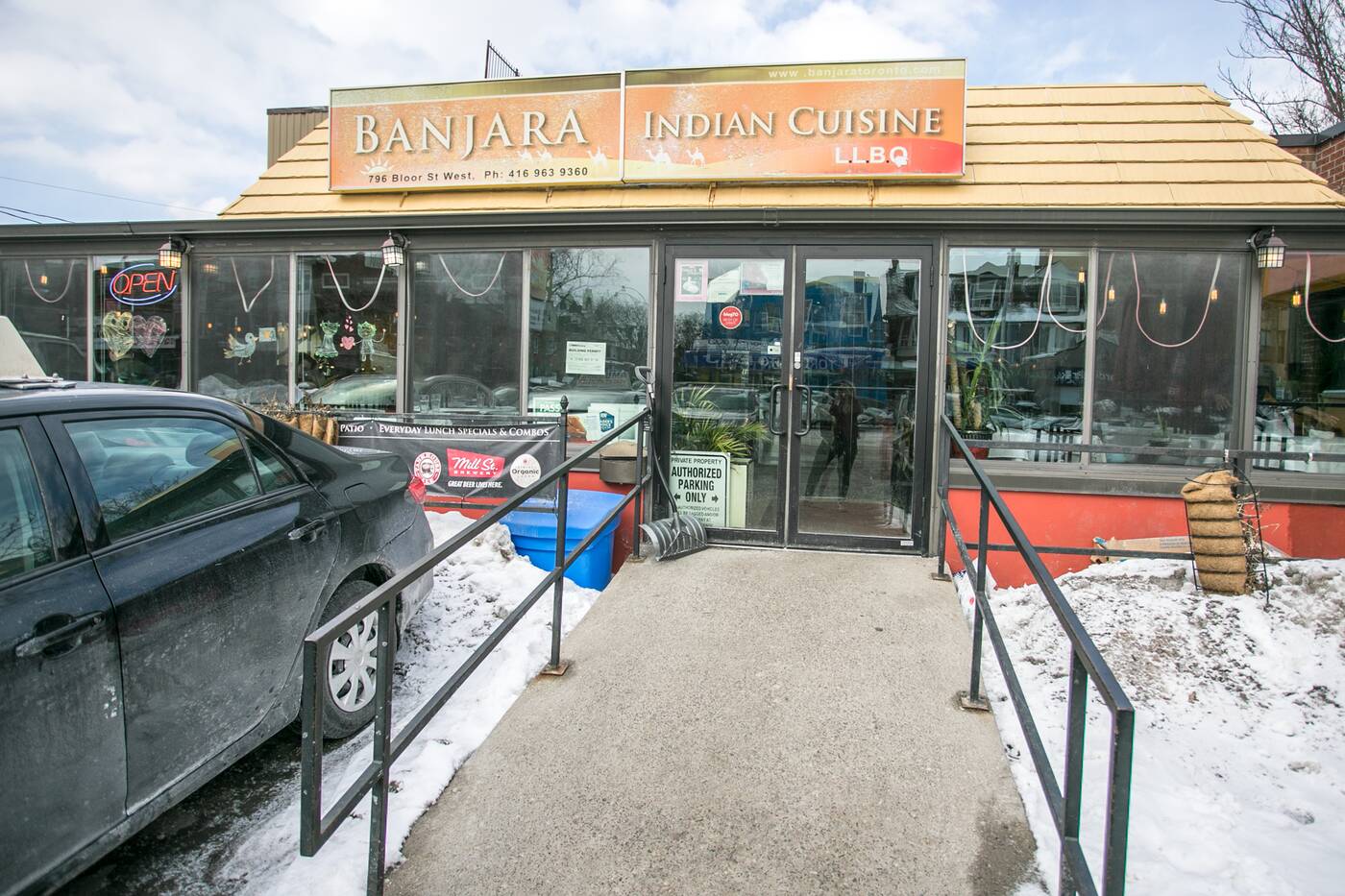