Christmas lights at Toronto homes are proof the holiday season is upon us, and some residents are going extra hard this year with their festive lawn decorations.

For the pandemic edition of Yule, it's all about neighbourhoods coming together to deck out their streets with giant, inflatable things from Canadian Tire. You know what they say: Dark times call for brighter Christmas lights.

Here are some home holidays and Christmas lights displays to check out in Toronto right now.

Kitschy Christmas decor has transformed the home of the D'Elia family once more.This year's version has the usual glimmering assortment of wreaths and glowing Santas. 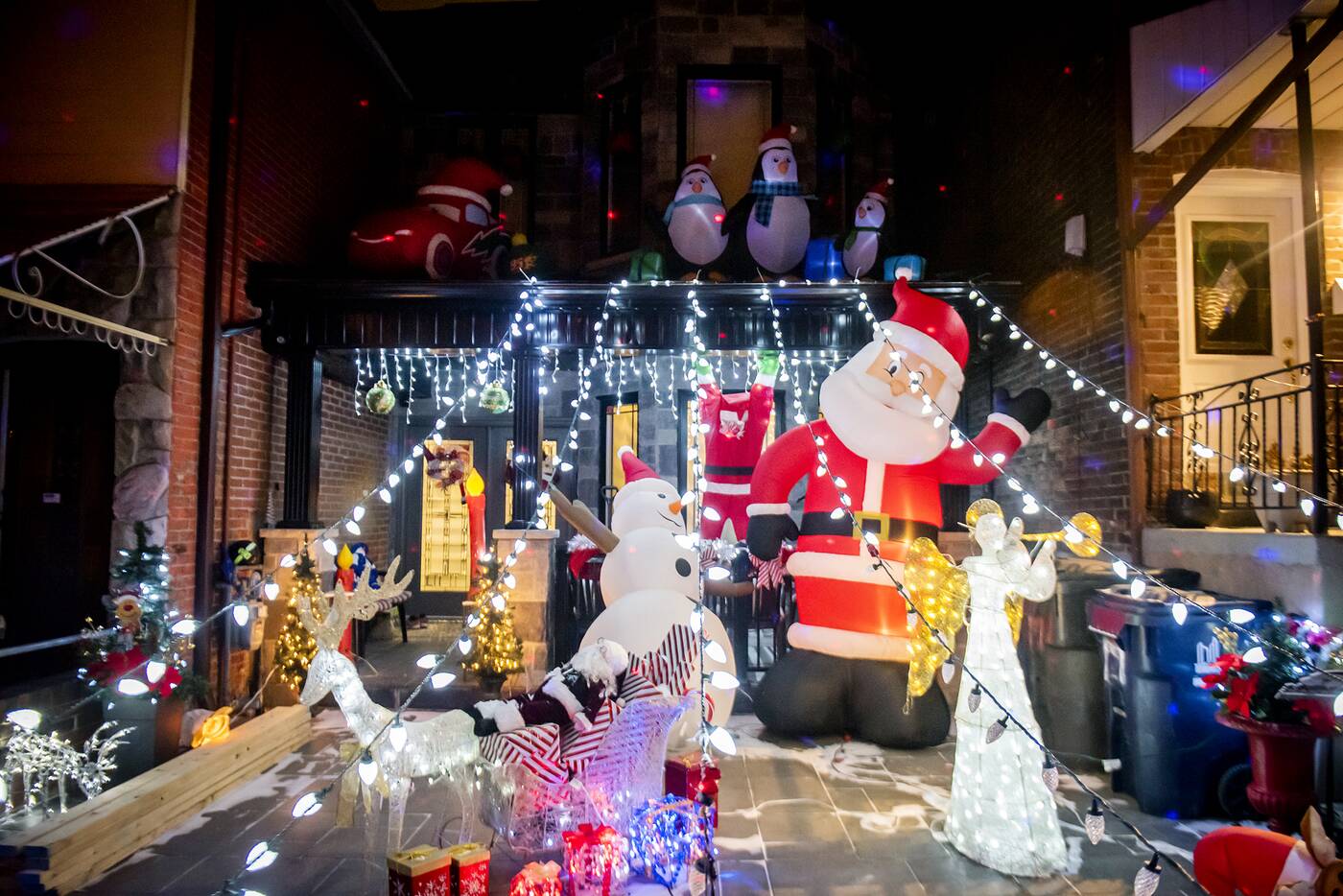 Brock Avenue is a good bet for Chistmas deco in walking distance of one another. Photo by Hector Vasquez.

Not far from the D'Elia's is this neighbourhood delight, where homeowners have decked out their interlocked front yard into a festive beauty with a big airblown Santa, snowman, and light-up angels. 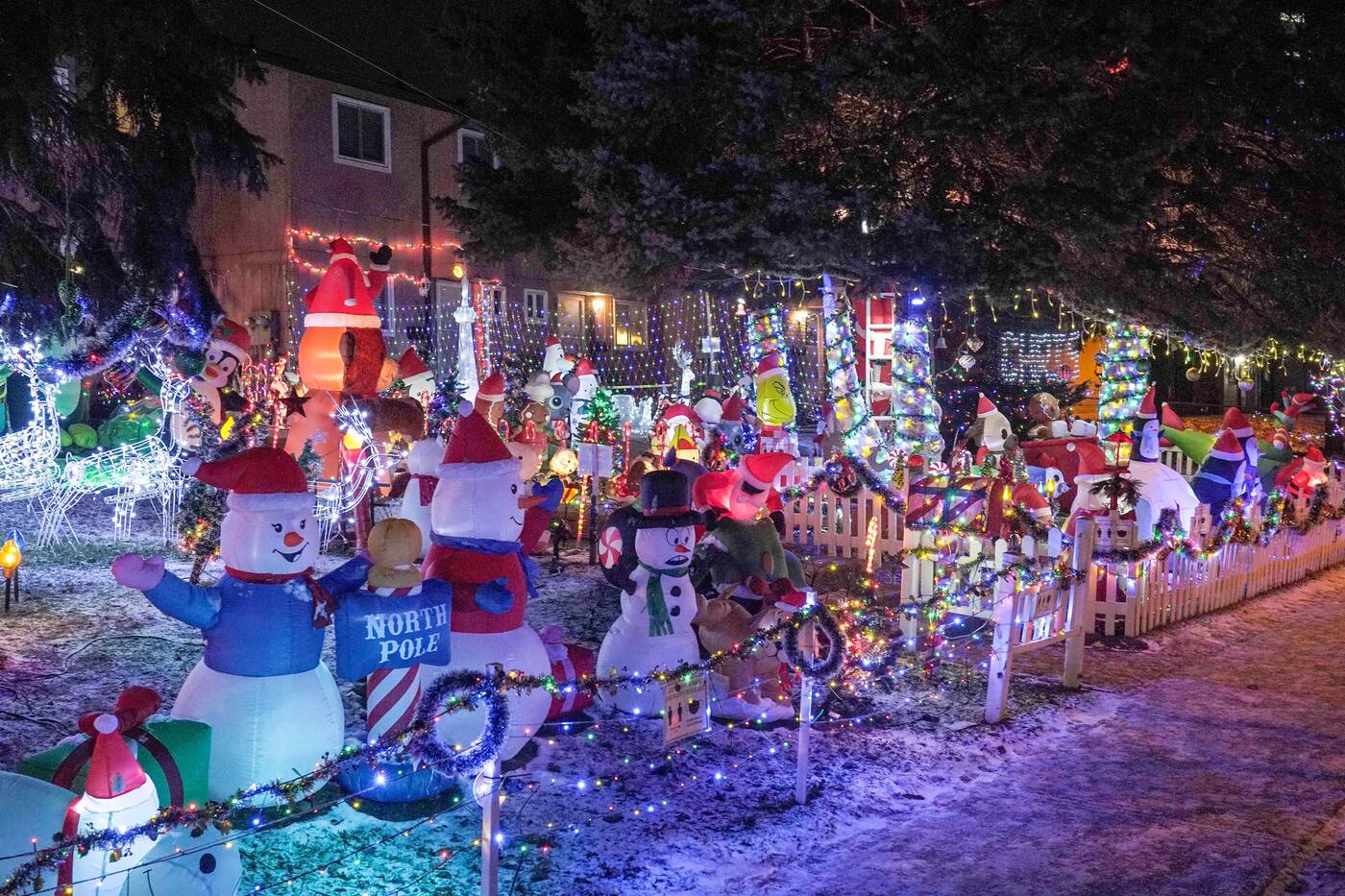 This iconic pair of houses has officially become a thrupple. Units 228 and 228 Brenyon Way, Toronto's certified decor destinations for the past 10 years, have been joined by their neighbour at 222 to create this year's most epic trifecta of over-the-top Christmas lawns.

Thirty years of epic decorations in and homeowner Mary Genua isn't stopping now. This house at Dufferin and Eglinton is bedazzled once again with gleaming lights and a cheery Ho Ho Ho sign. 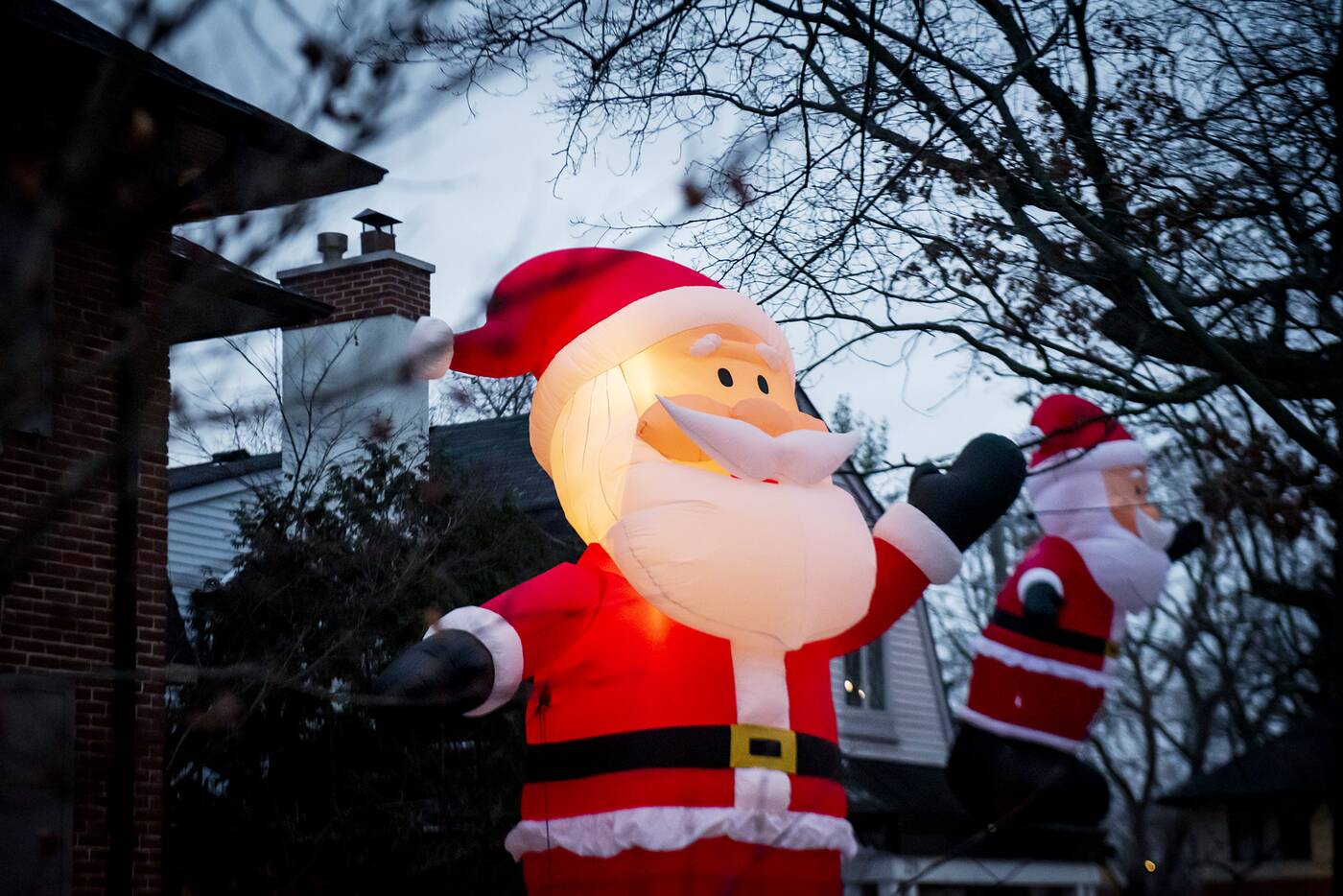 The giant inflatable santas on Inglewood Drive are up for 2020. Photo by Hector Vasquez.

Inglewood Drive has transformed into Kringlewood once more. This well-to-do residential street in Moore Park has been decking out their front lawns with giant, inflatable santas since 2013. This year is no different, so expect more than 40 Airblown Santas to greet you there.

The folks at 1 Fletcher Place are running their annual light show in support of SickKids. Head to Etobicoke between 5:30 p.m. and 10:30 p.m. daily, and tune in to 89.3 on your car radio. You'll be treated to a trippy display worth driving out for. 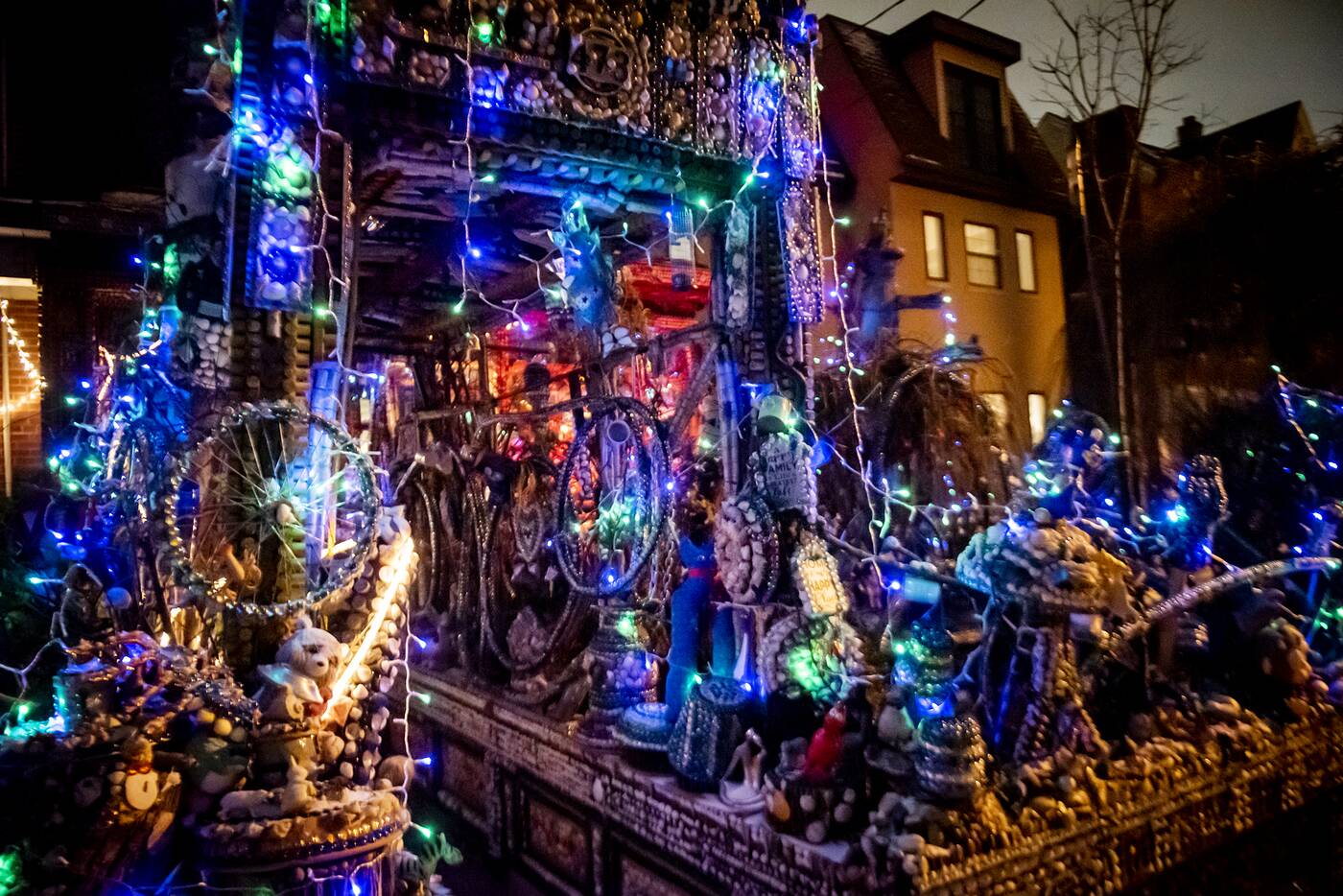 The home of Albino Carreira at 473 Clinton St. is quite the sight year-round, but its especially eye-catching now. The pool cue-covered home, nicknamed wood cakes, has gotten some glimmering blue lights to bring out the shine in the Bug mobile parked out front.

This home on the corner of Glenlake and Dorval has some of most outlandish holiday lights in Toronto - 📹 @hectoravasquez #Toronto #HappyHolidays pic.twitter.com/5ltFbZycui

Homeowners Trevor Walker and Karn Martin never miss a beat with their festive decos. Their Christmas displays are as cheery as their Halloween displays are spooky. This year's Yule look includes a giant inflatable Rudolph and Grinch. 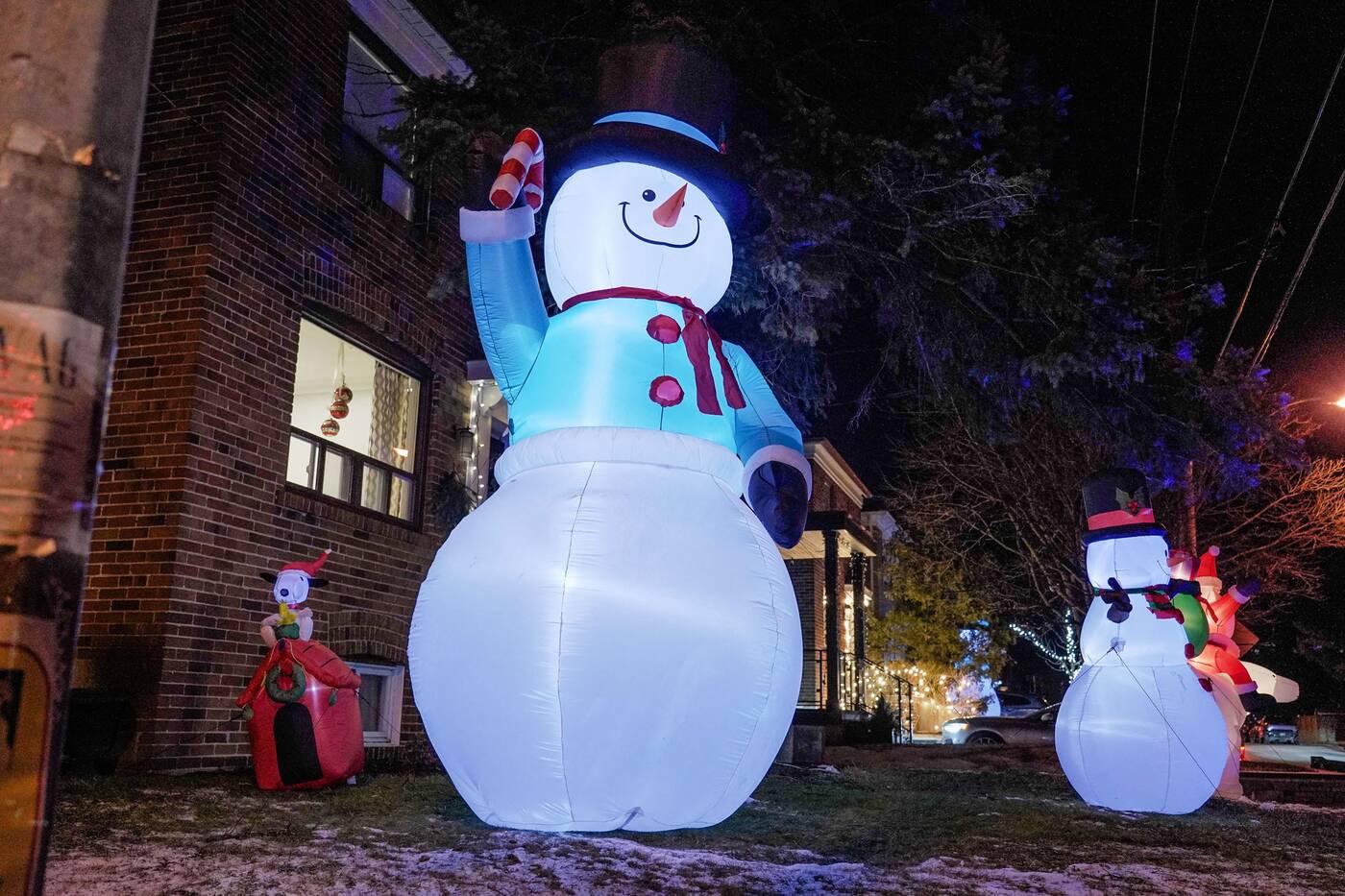 New this year are the inflatable snowmen around Woodland Park Road. Photo by Aaron Navarro.

Basically Scarborough's answer to Kringlewood, this community by the Toronto Hunt golf course has collectively brought out more than 40 glowing, inflatable snowmen for the first year ever. Find them in and around Woodland Park Road.

Arguably the most outrageous looking house in the city is all dolled up, literally, for Christmas. The Santas are perched atop their candy canes, and the poinsettas are out at 35 Bertmount Ave. You can almost make them out amidst the usual frenzy of stuff that's displayed. 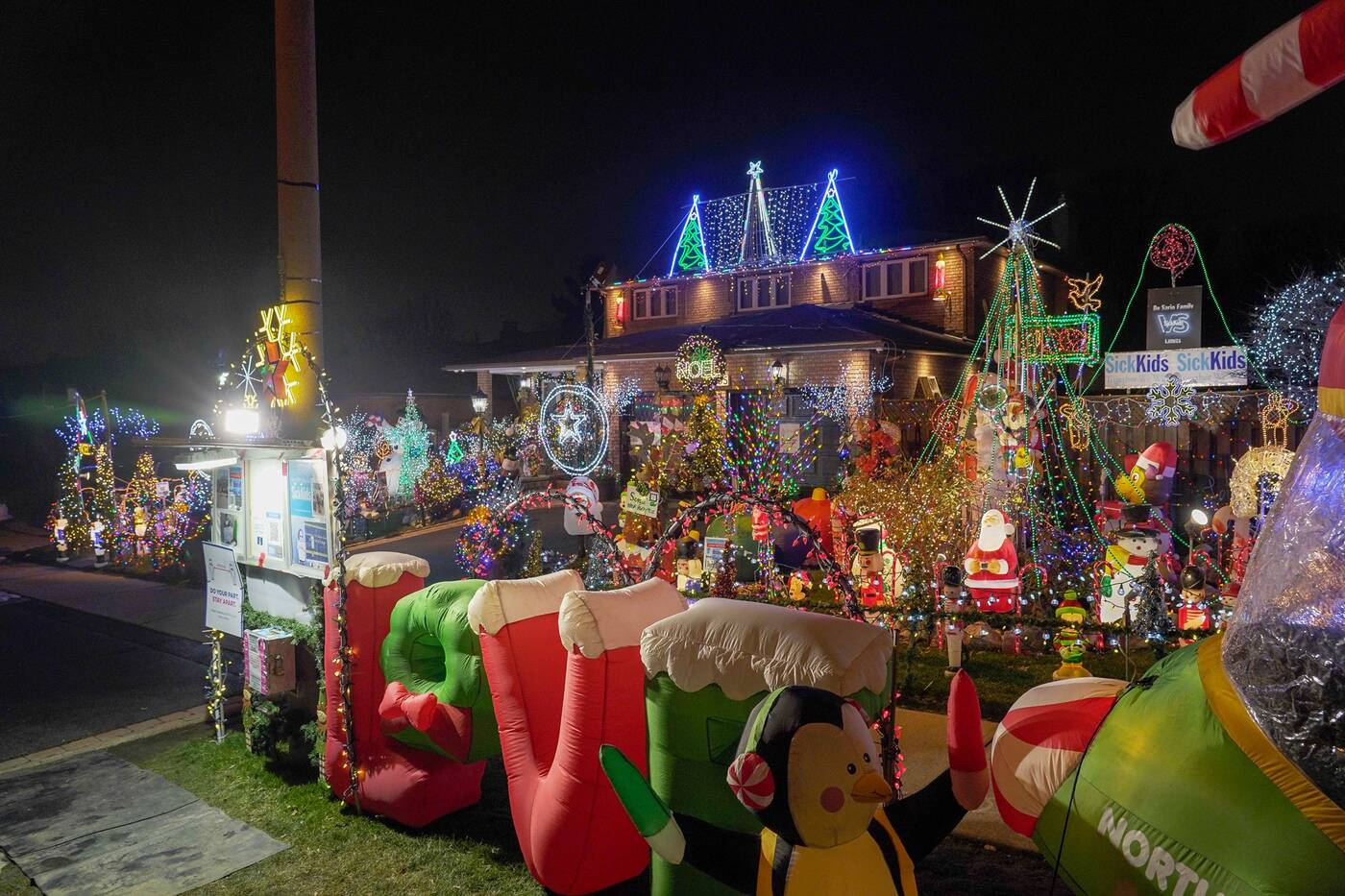 The DeSario family raises money for Sick Kids with their annual display. Photo by Aaron Navarro.

More than 50,000 LEDS are lighting up this house at the corner of Sheppard and Keele. The DeSario family is back at it again with their annual extravaganza of inflatables and twinkle lights in support of Sick Kids Hospital.

After a nine-year hiatus, the Lindsay brothers returned last year with their yearly show. Computerized displays and 1000,000 LED lights synched up to music make this property a straight up performance that takes over seven residential properties. 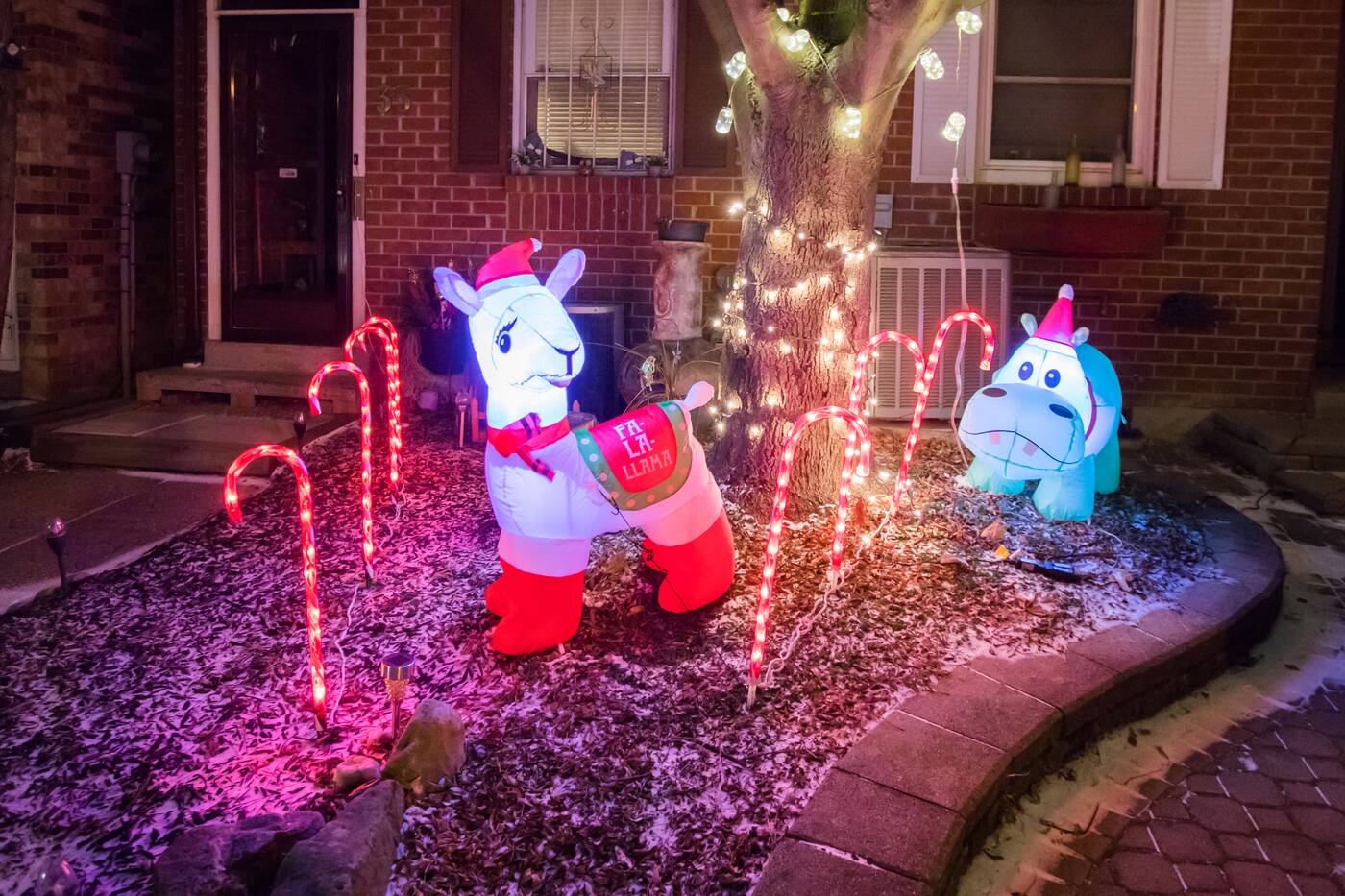 A 2020 addition to neighbourhood-wide decos is Llama Lane. Photo by Fareen Karim.

The culs-de-sac around Greenwood Avenue and Torbrick Road, just south of the Danforth, have been taken over by fa-la-la-la-llamas. Started by residents Raffi DerGhazarian and Jenny Chung Mejia, the trend has spread across the neighbourhood with at least 30 llamas so far.