It's no secret that, over the past few years, dozens of businesses in the Beaches have become dead fish in the water.

Toronto's eastern neighbourhood has long been struggling with complaints about boarded up businesses lining the main drag of Queen Street East.

Despite current studies being done to improve The Beaches reputation for commercial vacancies, it appears 2020 hasn't fared much better for the neighbourhood than last year, when multiple businesses closed in rapid succession.

The situation has yet to be better visualized until now, with a poster by local resident Stephen Knifton called Doors of the Beach.

One weekend, Knifton, who's lived in The Beaches for 12 years, decided to take a stroll to capture every empty storefront in the neighbourhood. 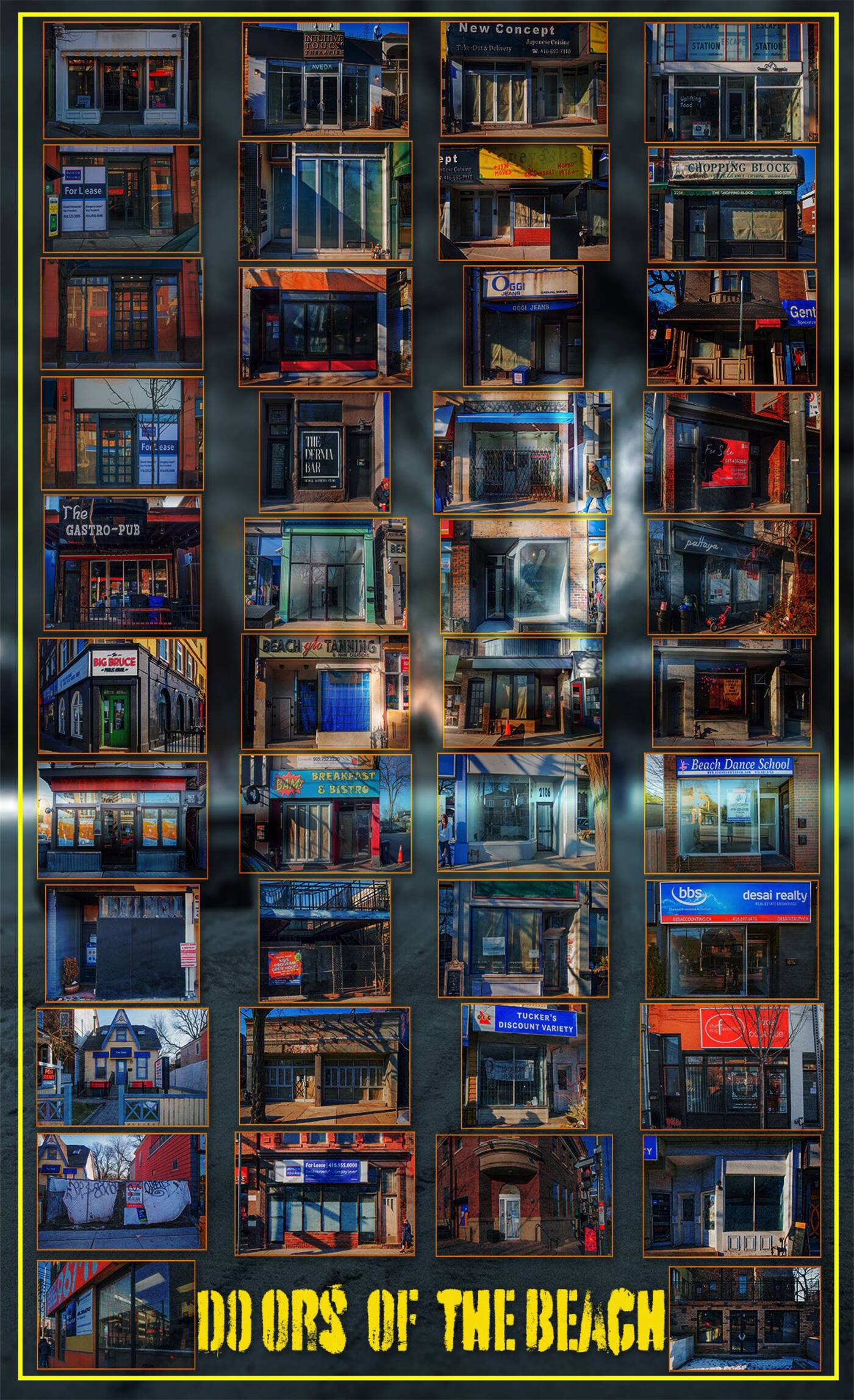 Photographer Stephen Knifton took photos of all the shuttered businesses in the Beaches.

Taking inspiration from the Doors of Paris and Doors of London series which were popularized in the 80s and 90s, Knifton created a poster with the facades of ex-businesses like The Gastro Pub, the comic book-themed Bam Breakfast & Bistro, and Beach Dance School, among scores more.

There were several more that he didn't include, like the beloved Salty Dog Tavern or the PetSmart, which is slated to close soon.

"You can't walk a block without noticing empty ones...It just seems out of control," says Knifton.

It's come to a point Knifton says he can't remember what businesses used to stand where. After a lengthy string of losses that included community hubs like Meat on the Beach this year, St. Louis in 2017, or Whitlock's in 2018, he says it's hard to keep track.

The poster, which Knifton shared on Facebook last week, has received mixed reviews, with some lauding the project as a callout for a slew of factors, from pricey commercial taxes to the now-cancelled vacancy property tax rebate, while others have been less supportive.

"I really hope you make a poster about how amazing the Beach is - draw attention to the 90% occupied amazing 300+ thriving businesses and community of people rather than this ugliness," wrote on Facebook user. "PLEASE STOP THE NEGATIVE ATTENTION!!!!!" 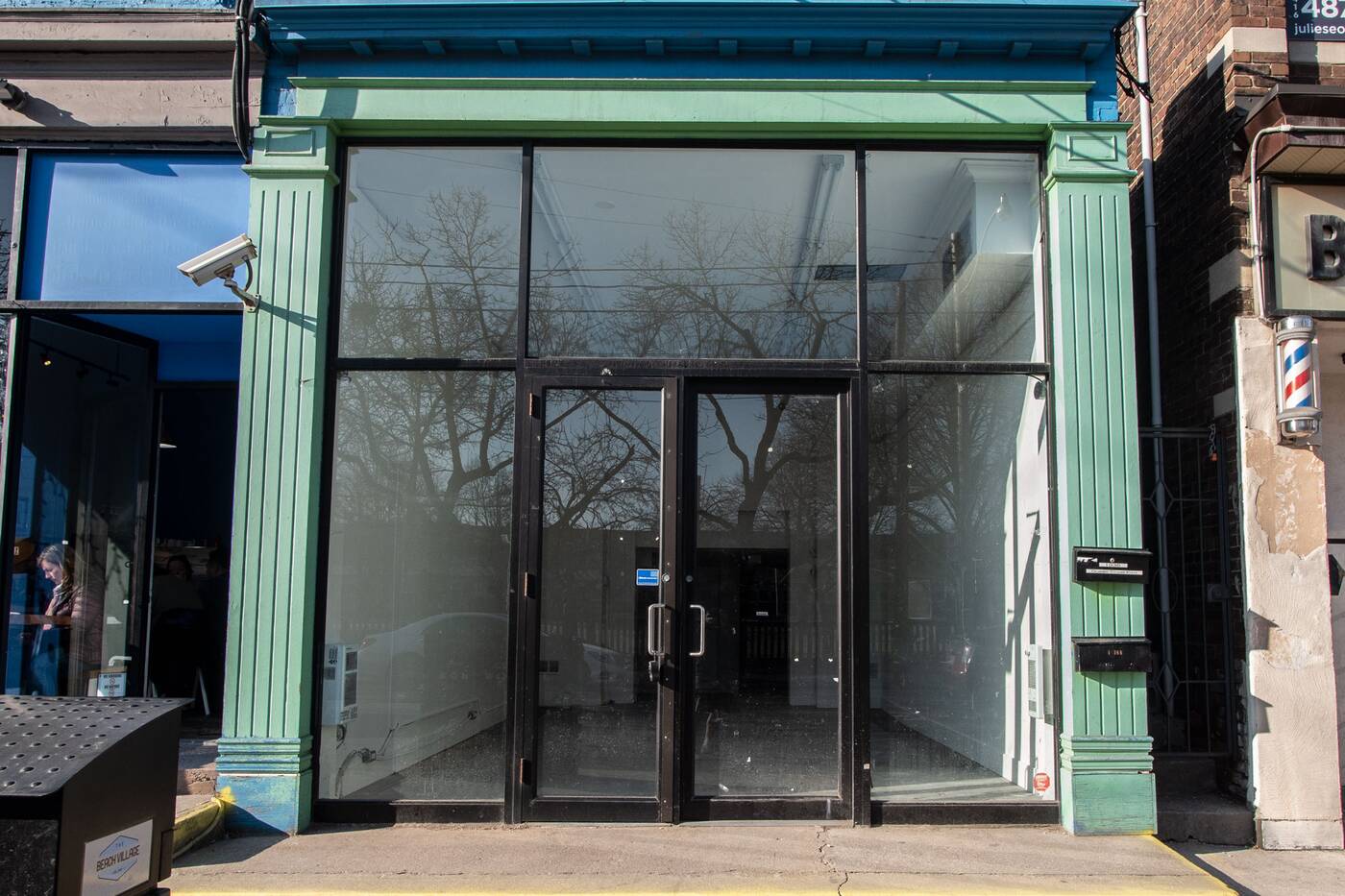 The commercial vacancy rate in the Beaches currently sits above the citywide average. Photo courtesy of Stephen Knifton.

According to Beaches city councillor Brad Bradford, the neighbourhood's vacancy rate is around 12%, compared to the citywide average which generally sits below 10%.

"There is certainly a unique problem on Queen East but I don't think the problems in general are isolated to our area," says Bradford.

"What I think is unique here is the length of some of the vacancies – many of them lasting for years – and overall retail profile being in transition for a new generation of main street."

The solution is "the right mix of incentives and policies" to support small businesses, which make up 74% of Toronto's retail landscape.

Bradford calls Knifton's poster "stark", but says the what really stands out to him is that of the 42 boarded up businesses, around 20 of them have no signage. Nor are they listed, or appear in the condition to be leased out at all.

"That's shocking and paints a unique picture for Queen Street. It shows that some of the landlords in the area re not interested in getting those properties to market. They're simply not motivated."