30 restaurant & retail chains that came to Toronto in 2015

Food and fashion chains that came to Toronto this year included world-renowned beauty and clothing brands like NYX and COS along with an influx of popular Asian fast food chains that saw long line-ups from day one.

Here's a round-up of restaurant and retail chains that opened in Toronto this year.

Carl's Jr.
It was only a matter of time until the U.S. burger giant climbed north of the border. Carl's Jr. has opened two shops: one at Yonge and St. Clair and the other on Queen West. The downtown restaurant fits right into the preexisting fast food landscape, which includes tried and true favourites like Burger's Priest and P&L; only time will tell if it can compete with homegrown favourites.

Cactus Club
The West Coast chain opened up a swanky new restaurant in the Financial District this fall. The eatery boasts some of the best art in the city outside of the AGO - you'll see works by Mr. Brainwash and Andy Warhol on its walls - and has enough room to comfortably seat 500. 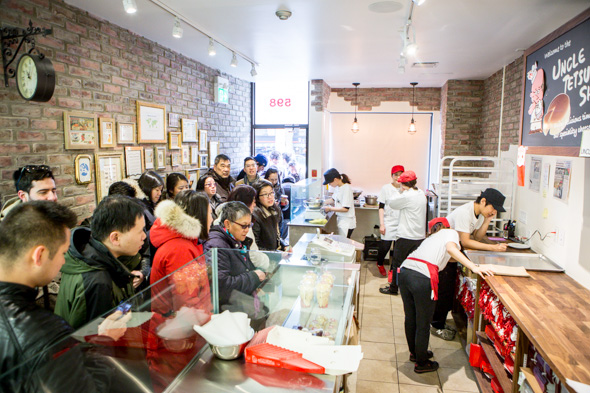 Uncle Tetsu
The Asian cheesecake chain began hocking Japanese-style treats this spring in a cozy space at Bay and Dundas. The bakery has gained a reputation in the city for its hour-long line-ups extending down Dundas. It became so popular that in July it took over the shop next door, transforming it into a Matcha Cafe specializing in green tea-infused goods.

i-migo
i-migo moved into a North York shop this year and brought drool-worthy concoctions like Tiramisu Cake Milk Tea and Potted Milk Tea with it. While North York has its fair share of milk tea shops (some of which are among the city's favourites), this shop has created even more competition in the neighbourhood.

b.good
If Carl's Jr. and Bareburger make your arteries feel like hardening, opt for a more health conscious on-the-go option like b.good. The Boston born chain has opened two locations this year: one just off King East and another on Queen West. You'll find the menu filled with farm-to-table salads and bowls that will outdo most fast food creations. 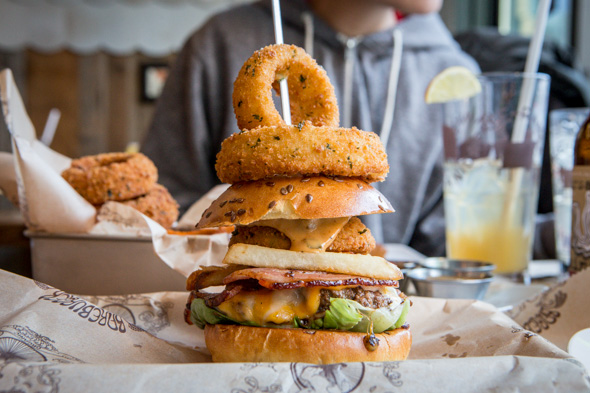 Bareburger
In winter of 2015 Bareburger put down roots near Yonge and Dundas. The New York-based eatery serves up Instagrammable pub food, boasting burgers stacked high with almost every condiment and topping imaginable.

Pinkberry
Torontonians love themselves some fro-yo, so it's no surprise that people were excited when Pinkberry announced it was coming to town. As of now you'll have to trek to Sherway Gardens to get your fill, but there's bound to be more locations on the horizon.

Coco Fresh Tea
CoCo Fresh Tea touched down in North York earlier this year, bringing its Taiwanese pearl and pudding filled beverages to the city for the first time. On the menu you'll find sweet teas infused with everything from melon to matcha.

Milano Coffee
While there are three Milano Coffee shops in Vancouver, the cafe on King West is Toronto's first. The shop has earned a reputation for its prize-winning espresso blend and masterfully-crafted drinks that will out do anything that your Starbucks barista can cook up. 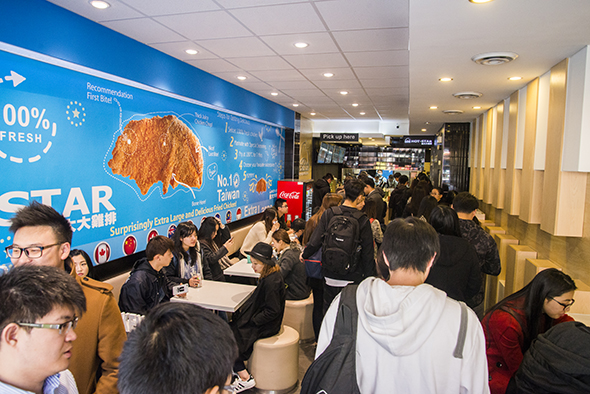 Hot-Star Large Fried Chicken
Hot-Star Large Fried Chicken touched down in Toronto this fall and was greeted with Uncle Tetsu-worthy line-ups. The Taiwan-based chain specializes in - you guessed it - fried chicken, but doles out a bevy of other deep-fried offerings, too. The sole location is in the Yonge and College area, so you'll often find it filled with hungry university students.

Jamie's Italian
Anyone that has ever turned on the Food Network knows the name Jamie Oliver, and while the UK is flush with Jamie's eateries, Toronto has been without one for far too long. Luckily, Jamie's Italian has just recently opened its doors, offering homestyle Italian dishes to hungry Yorkdale shoppers.

Cacao 70
For those who crave chocolate, Cacao 70's arrival in the Distillery District this fall is considered a blessing. The Montreal chain serves up decadent desserts and drinks like cheesecake crepes and drinking chocolate - perfect for when you're in the mood for something indulgent.

Cafe Neve
Another Montreal-based cafe popped up early this fall, taking over a corner of Frank & Oak in the boutique at The Shops at Don Mills. A hand-crafted espresso-based drink from here makes for the perfect shopping partner. 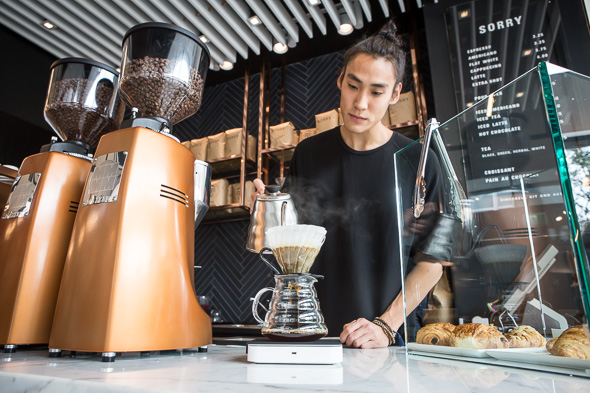 Sorry Coffee
Before Kit & Ace opened its Yorkville boutique, only a rare few Torontonians had heard of Sorry Coffee Co. Why? Because it's the first of its kind in North America. The only other location can be found across the pond in Kit & Ace's London location. The cafe has gained popularity in the city for its Instagram-worthy aesthetic and ever-changing cups.

Squish Candy
Squish Candy, a Montreal chain, moved into the Hudson Bay's flagship Queen Street store at the end of the summer, gracing Toronto with gourmet gummy candies in a medley of flavours. The shop sells vegan-friendly, Kosher, sugar-free and non-GMO sweets, so you can get in on the action no matter what your dietary restrictions may be.

Papabubble
If you find yourself in the Yonge and Lawrence area, check out the neighbourhood's newest sweet shop. The candy emporium has outposts in the U.S., Europe and Asia, so its arrival in Canada was imminent. Even if you don't plan to indulge in any of the goods, it's worth dropping by to see the candy makers at work.

The Shameful Tiki Room
If you like your bars with a touch of island flair, look no further than The Shameful Tiki Room in Parkdale. The Vancouver-born bar serves up classic tiki drinks (think Mai Tais and Singapore Slings) and has everything from grass covered booths to tribal masks lining the walls.

McCafe
McCafe is not a new thing. In fact, many (if not all) McDonalds locations in the city feature built-in McCafes that'll tend to your caffeine needs. However, a mere few weeks back Toronto's first stand-alone McCafe opened its doors. What's so special about it? All-day Egg McMuffins, that's what. 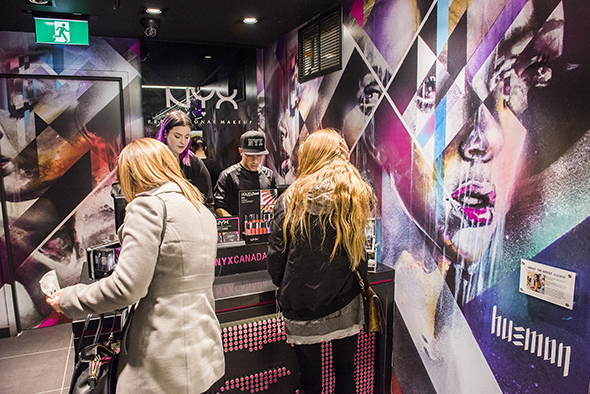 NYX Cosmetics
The online popularity of NYX knows no bounds. YouTube beauty gurus, Instagram celebs and make-up savvy bloggers rave about the brand's products, making its arrival all sorts of exciting for cosmetic-hungry Torontonians. The store opened this fall on Queen West and you'll find it stocked with much more than the limited range carried at Rexall.

Kit & Ace
Kit & Ace is a Vancouver-based shop specializing in ultra-soft technical cashmere gear for men and women. This year it opened two Toronto locations: one on Queen West and another in Yorkville. If you're on the hunt for better basics than those sold at The Gap, it's worth stopping by.

COS
H&M's more sophisticated sister store came into town in the middle of the year, bringing with it racks of high-quality, chic clothing for both men and women. If you're a fan of Zara and Oak + Fort, the pieces sold at this Yorkville boutique will be welcome additions to your wardrobe.

Reiss
UK retailer Reiss found a home on the top floor of the CF Eaton Centre in March, adding a touch of British sophistication to the mall. The shop stocks mid-priced cocktail dresses, suits, knits and office-appropriate attire for men and women. 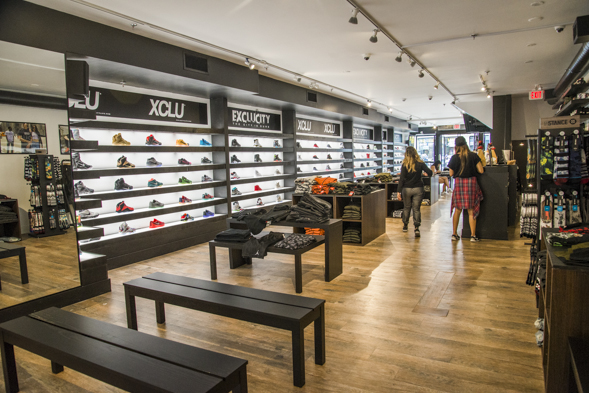 Arc'teryx
Arc'teryx is a Vancouver chain that specializes in high performance outerwear, made to combat even the coldest of temperatures. Insulated jackets, fleeces, ski pants, and base layers can all be found at its new Queen West location.

Aesop
Aesop, an Australian brand, opened its first freestanding Toronto store this year, and while it may not be cheap, it gets the job done right. You'll find the Queen West shop filled with upscale, natural goods that will whip your pores into shape.

SHOO by Steve Madden
While Steve Madden shops are anything but few and far between, the only SHOO you'll find in Toronto is located in the CF Toronto Eaton Centre. It popped up this fall and stocks much more than just the designer's own brand. Labels like Freebird, Betsey Johnson, Dolce Vita, Brian Atwood and Blondo can be spotted here. 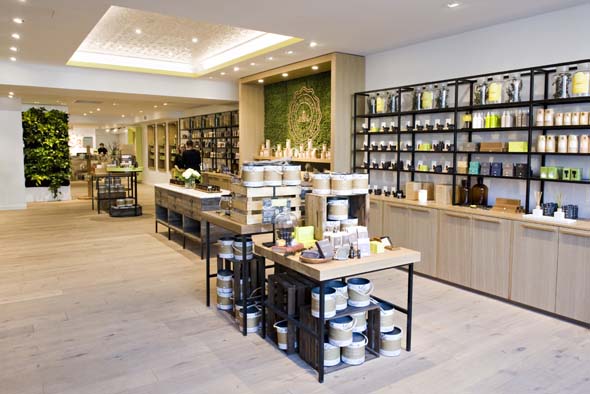