Parquet is a contemporary French-inspired bistro on Harbord Street with distinctly Torontonian sensibilities. Besides a convivial atmosphere for delicious food and thoughtful drinks, the sophisticated restaurant takes over the former Flock space transforming it into a room of elevated comfort.

Here, bistro classics are given modern international flourishes a la chef Jeremy Dennis. A musician and chef, Dennis has worked at Woodlot, Burdock Brewery, Chantecler and Montgomery’s, filling Parquet’s menu with refined French-inspired dishes that showcase products from local producers and set to change seasonally – up to six times a year. 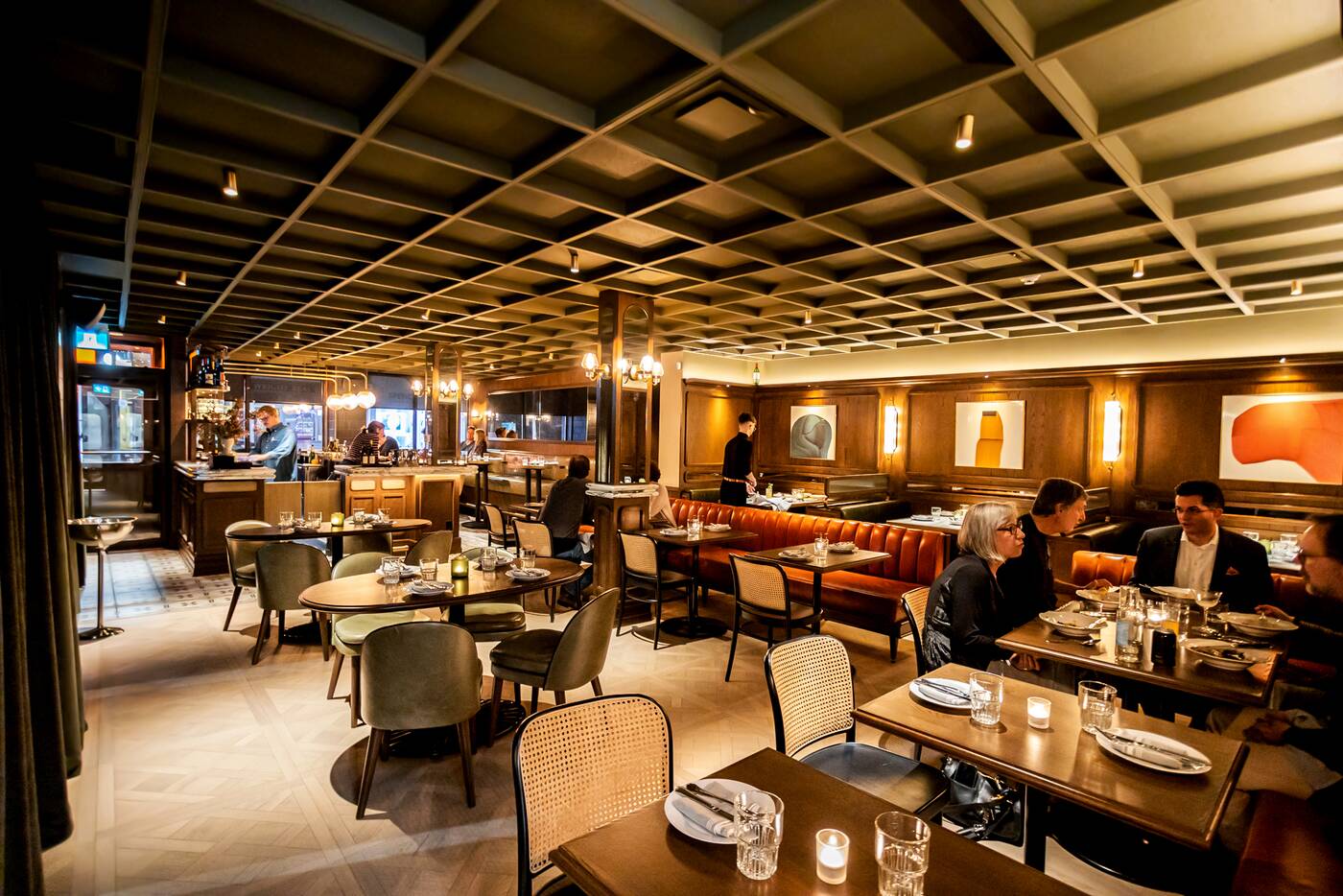 Owners Daniel Bernstein and Matt Cohen met in law school. Besides sharing a passion for dining out, they are both avid supporters of the restaurant scene outside of their day job – although Bernstein has since left the practice to focus solely on the business.

“We wanted [to create] a space that makes people feel good. We noted the kind of places we liked and built it [to include details of] what we and other people would want,” Cohen told blogTO explaining that the restaurant’s name is inspired by parquet flooring that’s known for being classic, detail-heavy, iconic, and strong.

Although the duo are first-time restauranteurs, the space is surprisingly polished. I learn that it’s partially because Bernstein is a natural when it comes to becoming a subject matter expert within a short period of time (thanks to years spent as a commercial litigator).

He also attributes his jump into the precarious business of running a restaurant to irrational confidence and industry connections. 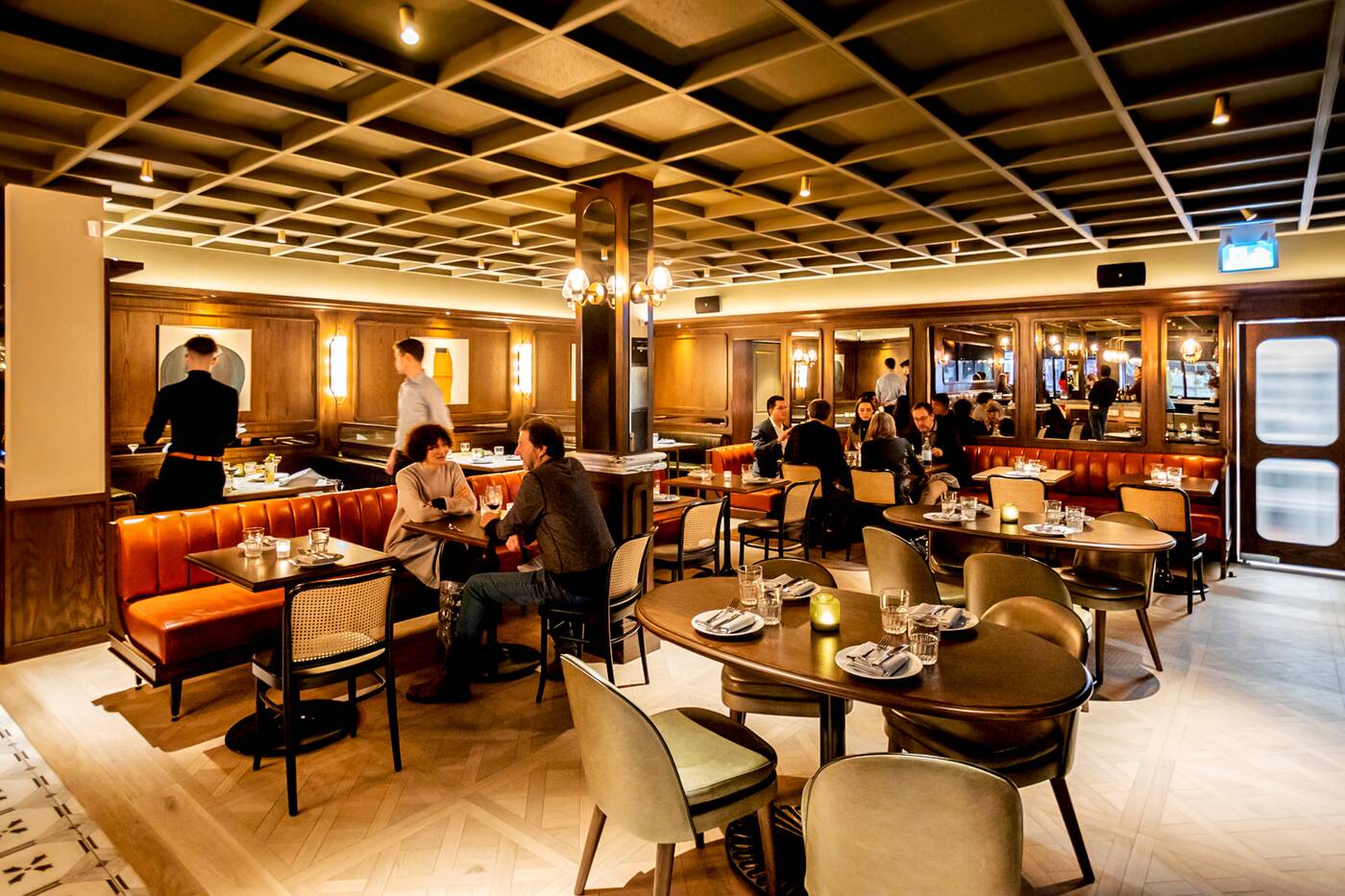 “It’s true we’re first-time restauranteurs, but I had such confidence because I know Daniel to be someone who’s extremely intelligent and humble; he knows what he knows, and he knows what he doesn’t know. He knows when we have to fill in the gap with expertise,” said Cohen.

“We were confident that together we could build a vision. And that we were going to need others to contribute to make it a reality.”

Food nerds will probably remember Haman as the chef and co-owner of Woodlot, the College Street hot spot that was known for contemporary Canadian-Italian cuisine that was cooked over wood fire.

It was Haman who recommended Dennis, one of his former Woodlot cooks, for the position. Dennis has created a dreamy menu with creative dishes that are rooted in the classics but enhanced with refined techniques the chef has honed over the years at some of the world’s top restaurants (more below). 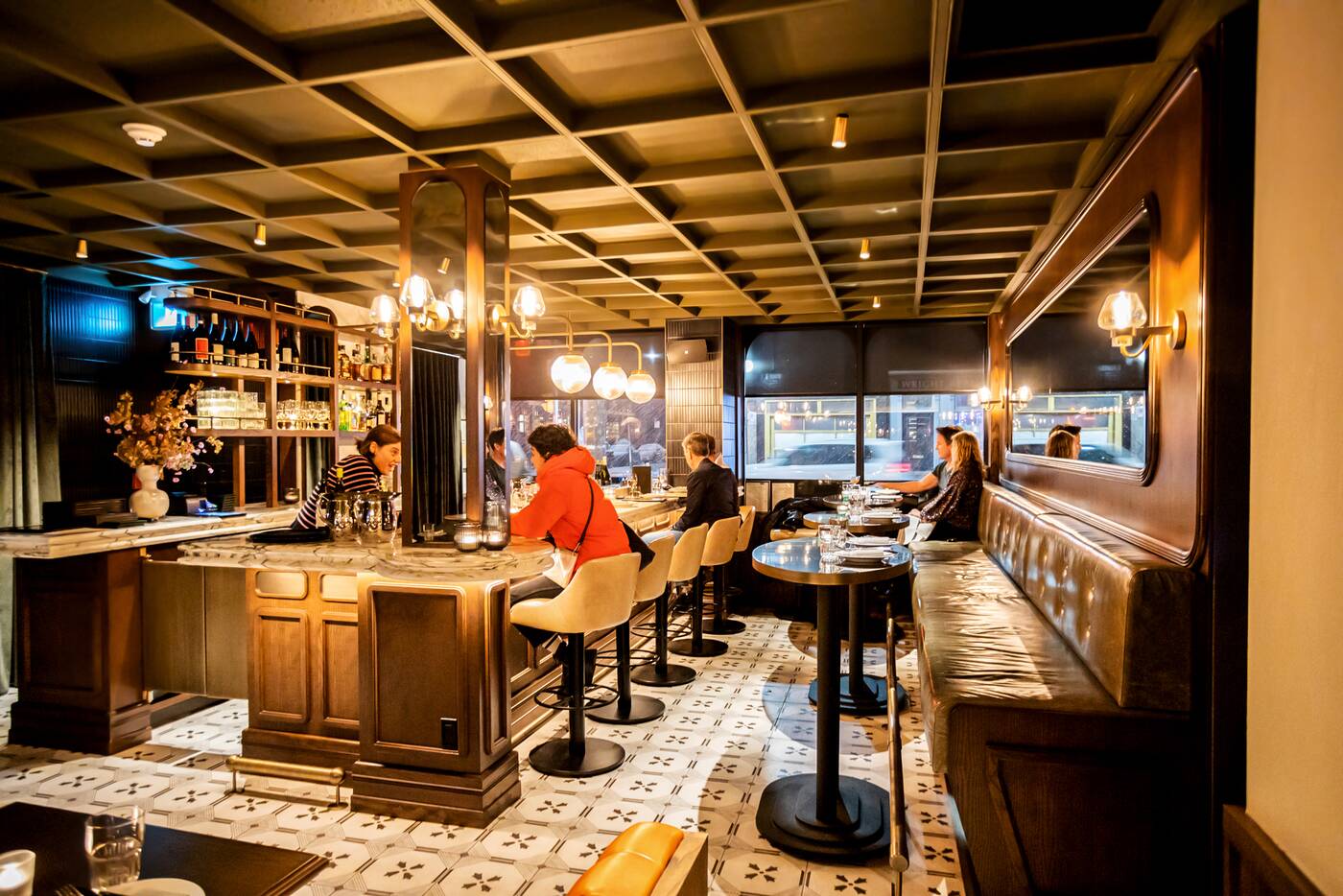 “We wanted a timeless space,” said Bernstein of the warm wood-lined space. “We knew we wanted the bar to be prominent, and the restaurant smuggled into it. Solid Design Creative did a great job. The bar is beautiful, and it radiates energy out into the room.”

The design firm ran with Bernstein and Cohen’s vision, keeping the ceiling, but filling the open room with a mix of warm leather, brass and wood elements. 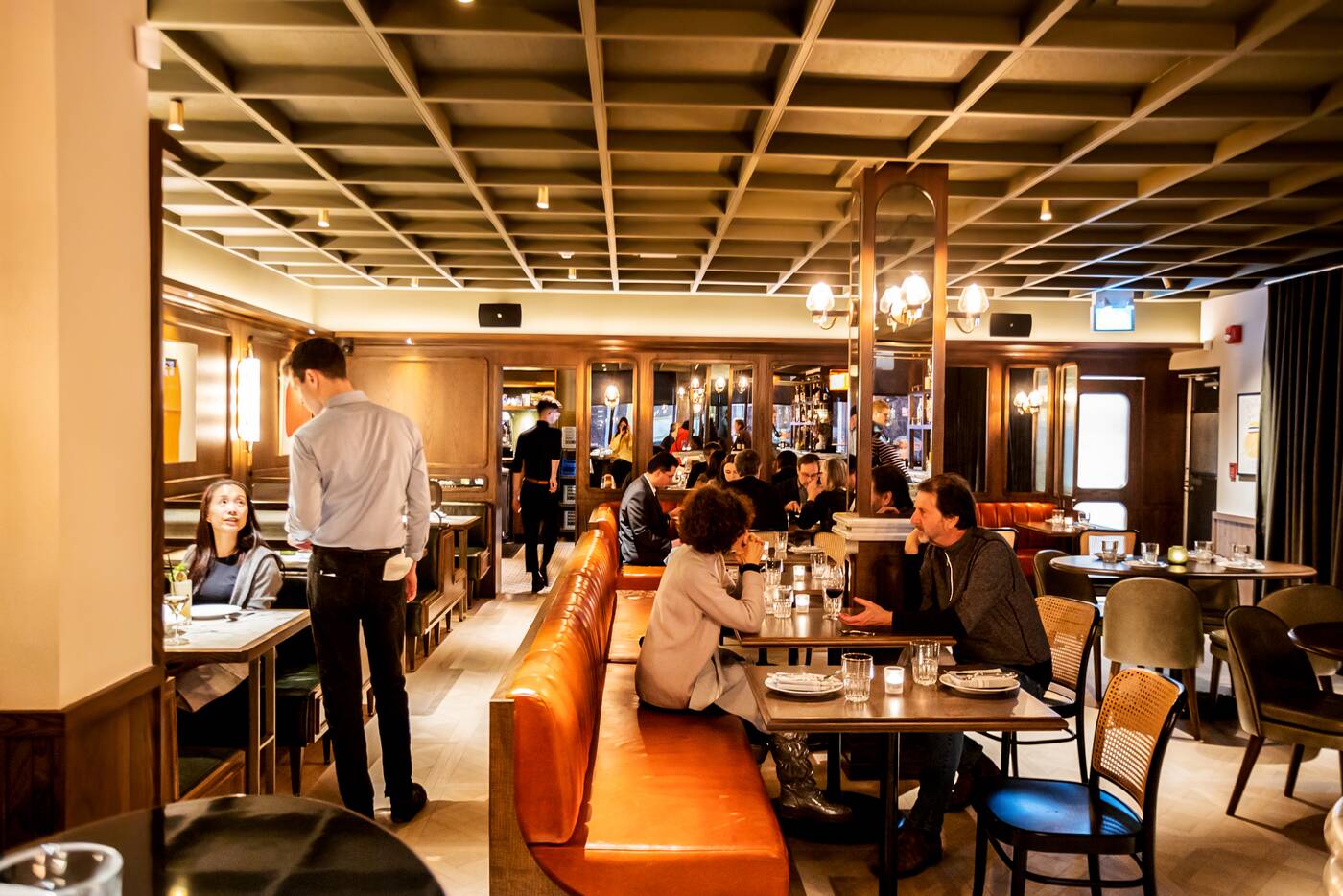 In addition to the marble-topped bar in front that’s flanked by tall leather stools plus a long leather banquette flushed against a mirror-lined wall, there are lush leather-lined booths and bistro-style seating in the back.

The different restaurant zones were intentional; they give guests a variety of options when they dine inside the cozy space. In addition to the 50 seats inside, Parquet is blessed with another 50 on the Robert Street flanking patio when the weather is nicer, and currently separated by accordion sliding doors.

Bonus aside: a private dining room behind their spacious kitchen is in the works. 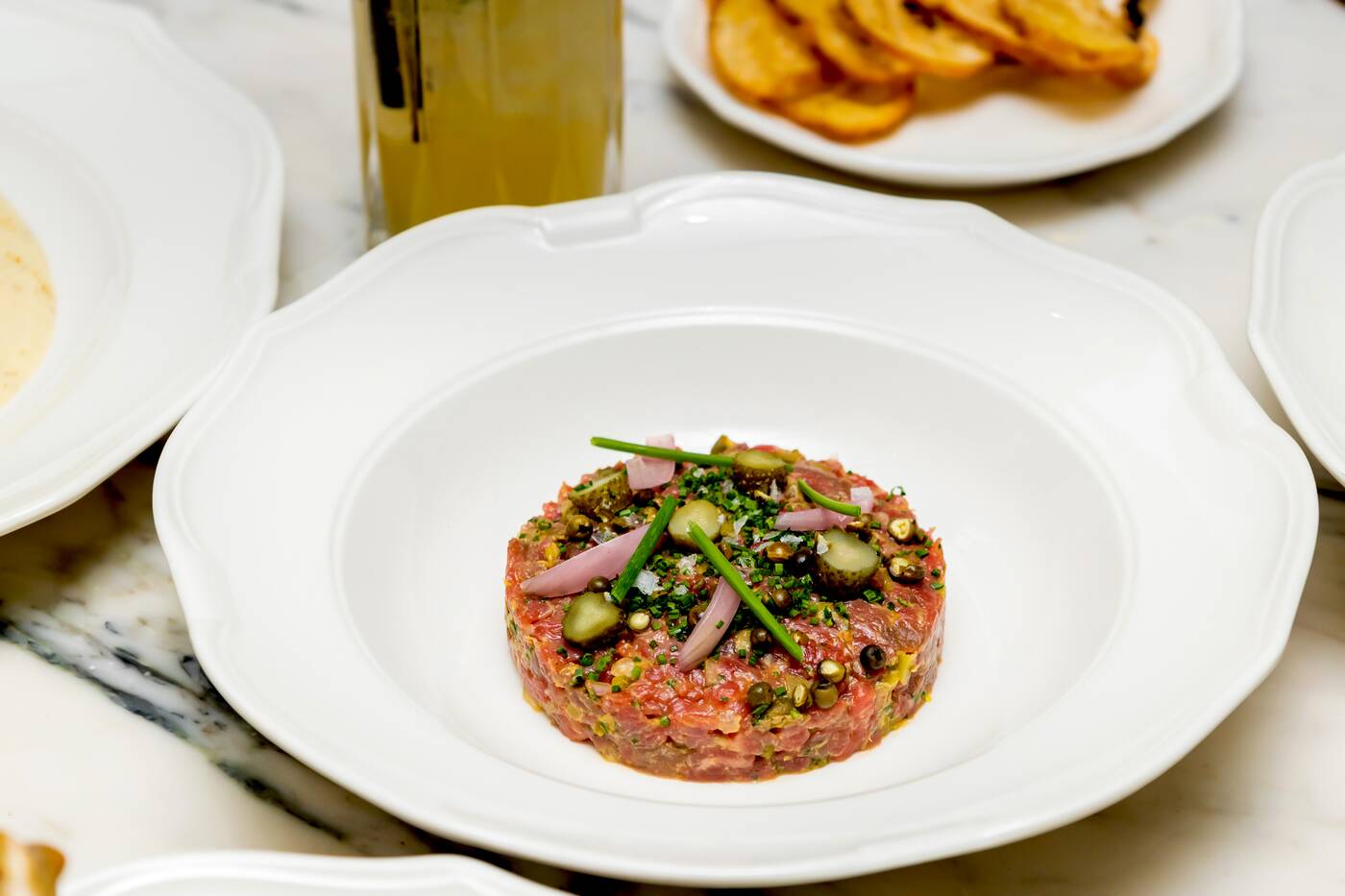 Settle in and partake in the hand-chopped Steak Tartare ($21) which seasons top sirloin with chives and fermented pepper. Hidden in the centre of the plated tartare is a raw egg yolk which diners are instructed to mix thoroughly - with the meat, cornichon and pickled shallot garnishes - before consuming. 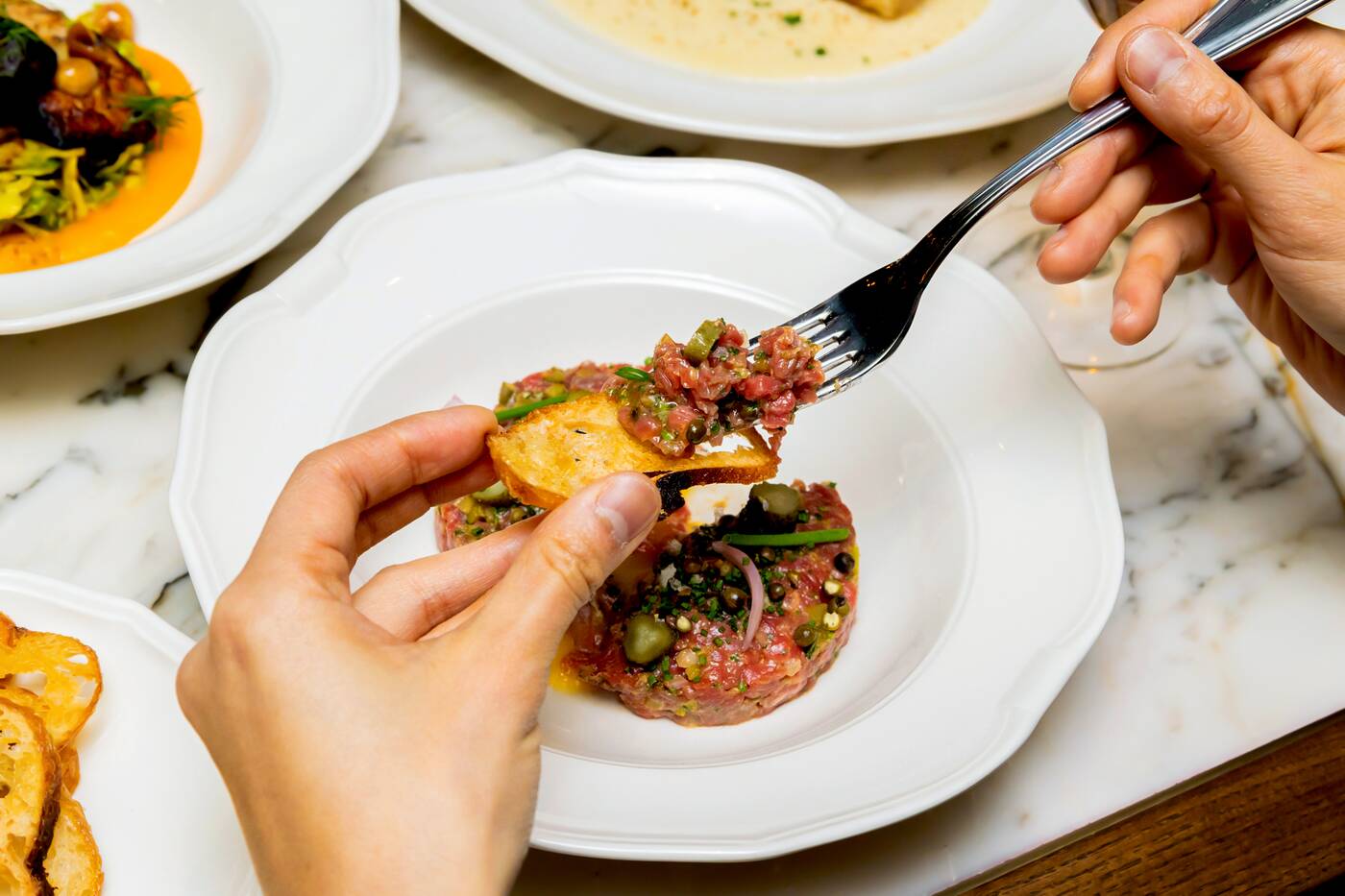 The tender yet toothsome starter is well balanced, pops of its pickled garnishes, and satisfying against the airy wisps of paper-thin homemade crostini. 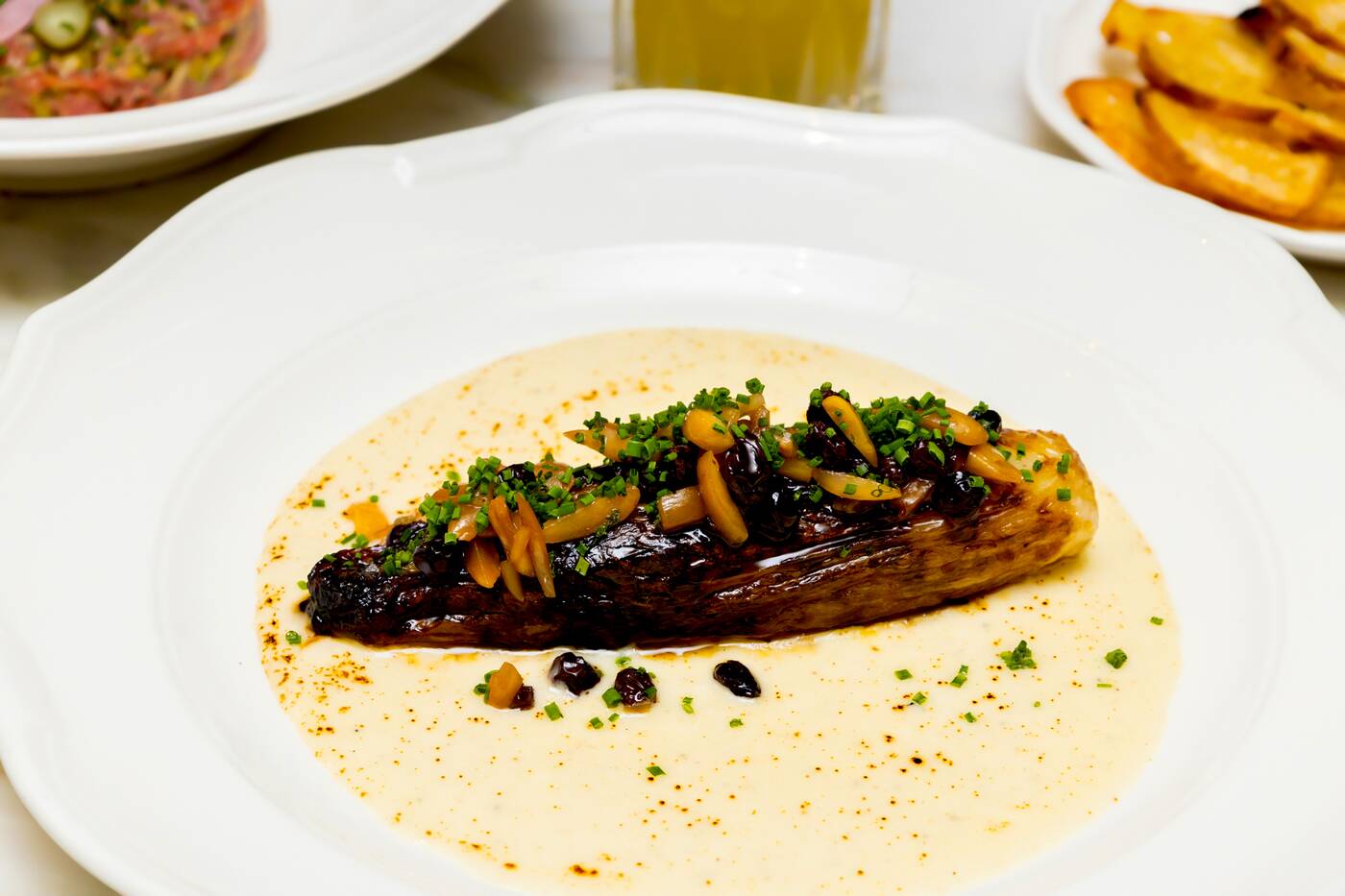 The Braised Belgium Endive ($24) is a favourite of Dennis'.

It’s inspired by his stage at notable – and now shuttered - top-table, Chambre Séparée in Ghent, Belgium when chef-owner Kobe Desramaults whipped up a dish of Belgian endive gratin with prosciutto for staff meal. (Fun food nerd fact: Dennis also staged at Faviken in its last season.) 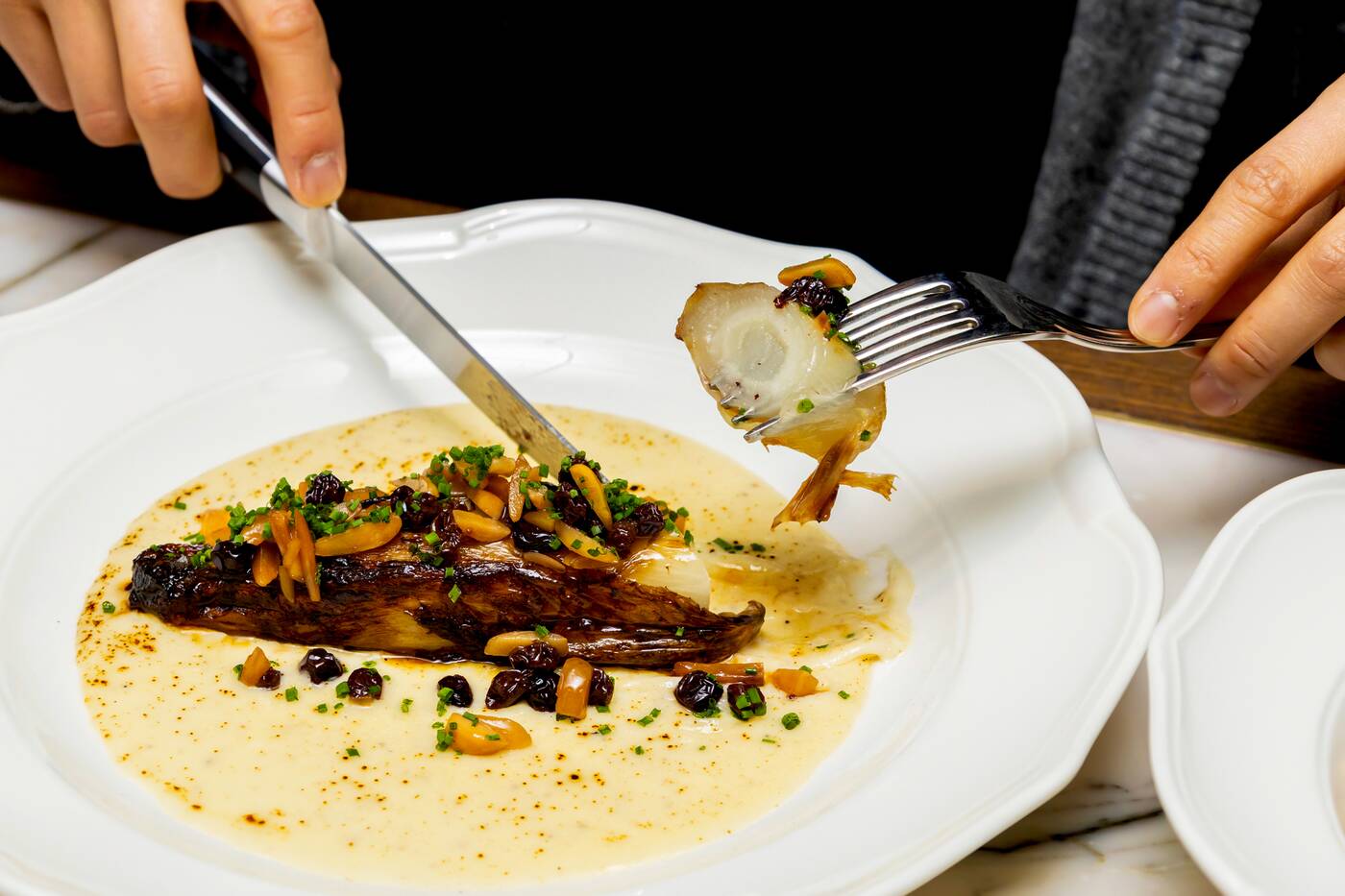 Cooked in white wine with aromatics, the whole chicory sits on a luxurious raclette sauce and finished with slivered almonds and currant vinegarette. The warm vegetable dish is silky sweet, but bursts of flavour thanks to the punchy vinegarette which also cuts through the rich sauce. 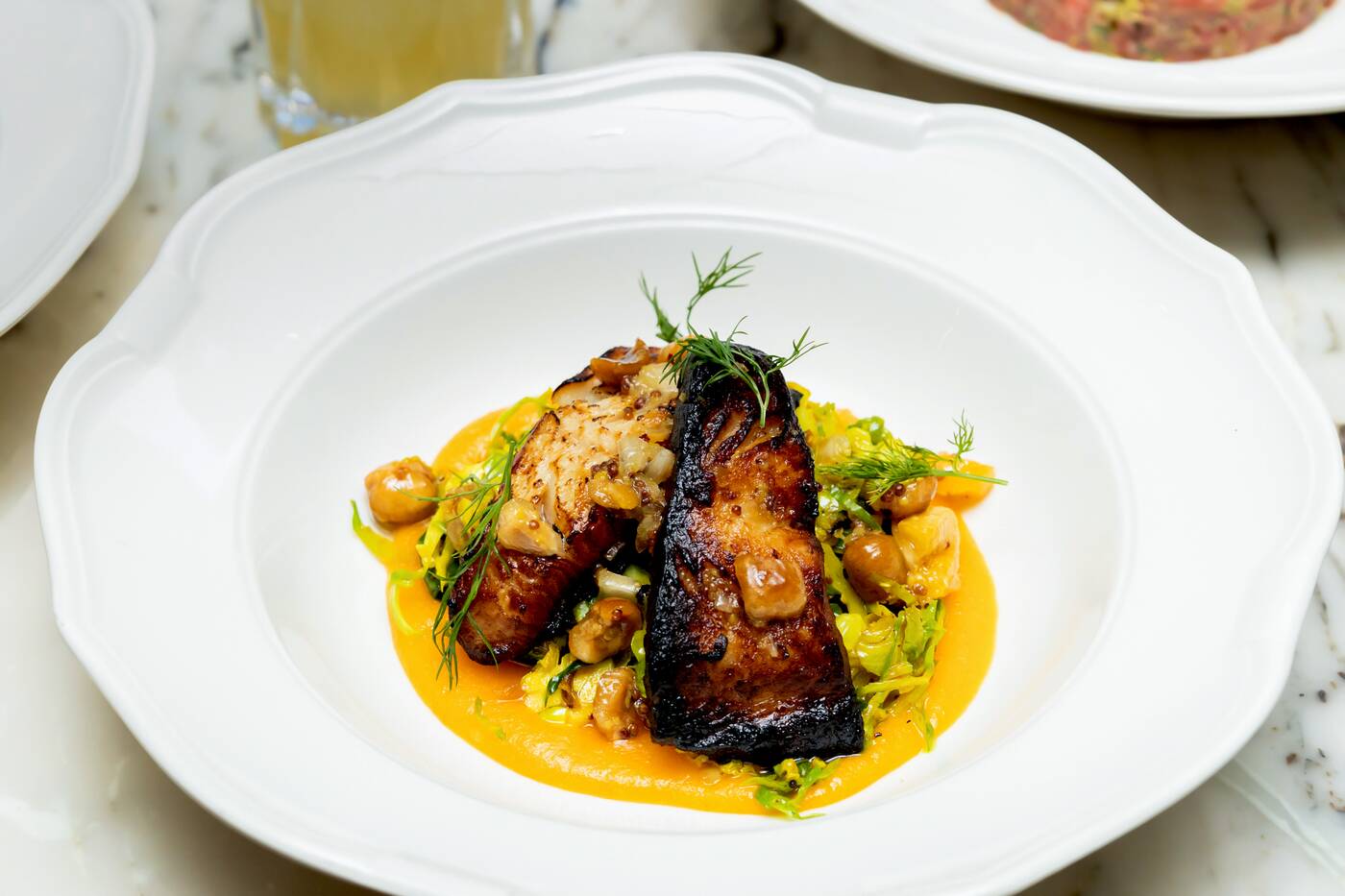 One of Dennis’ original contributions to the changing menu includes the pan-roasted miso Sablefish ($38).

Here, the buttery-rich fillets are perched on tender shaved vadouvan curry Brussels sprouts. It’s served in a pool of apricot-chili puree and cut with a hazelnut-apricot vinaigrette. 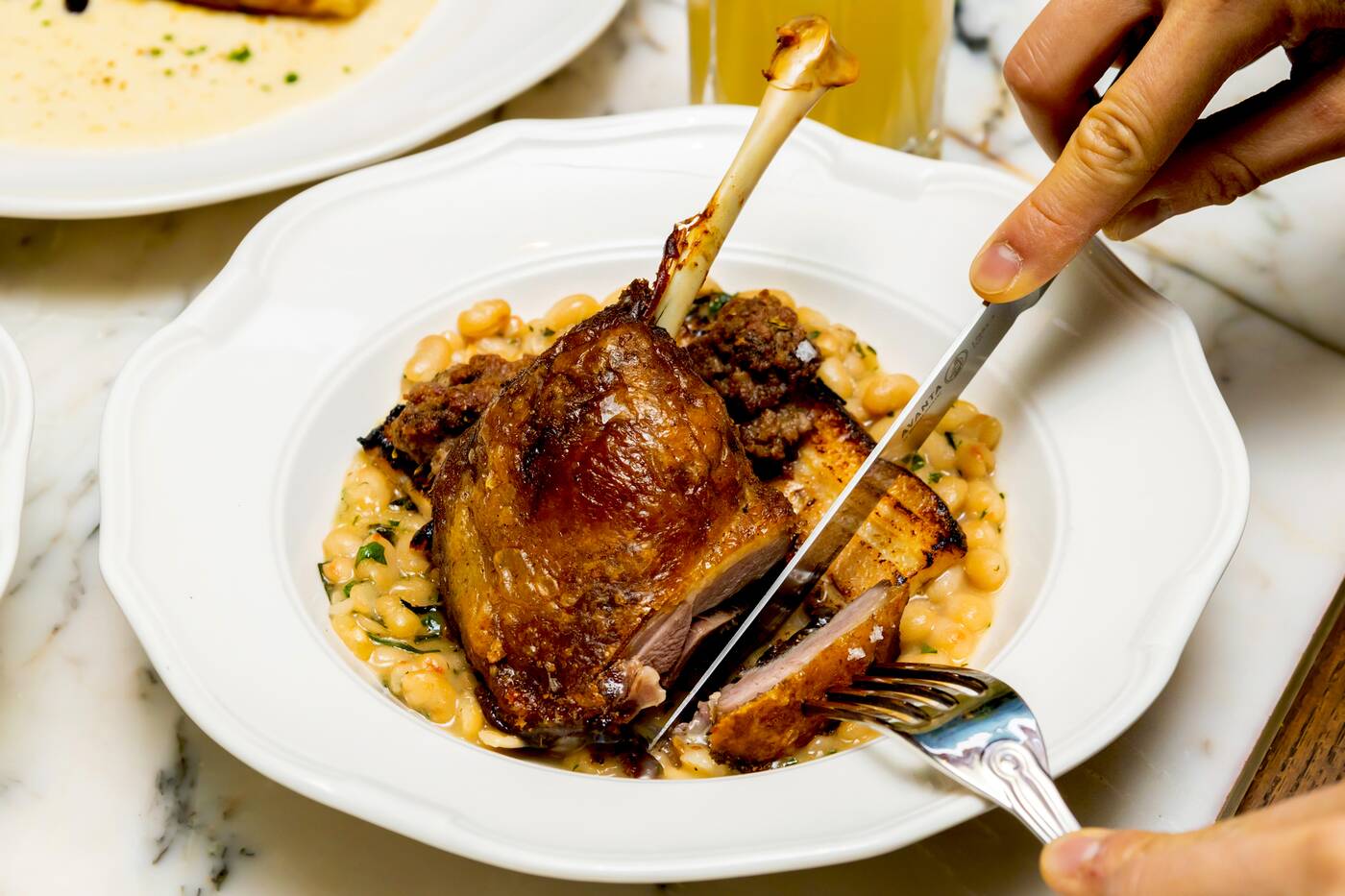 The latter is slow-cooked in ramen broth for 24 hours to add flavour and body to an essential part of this country-style dish. 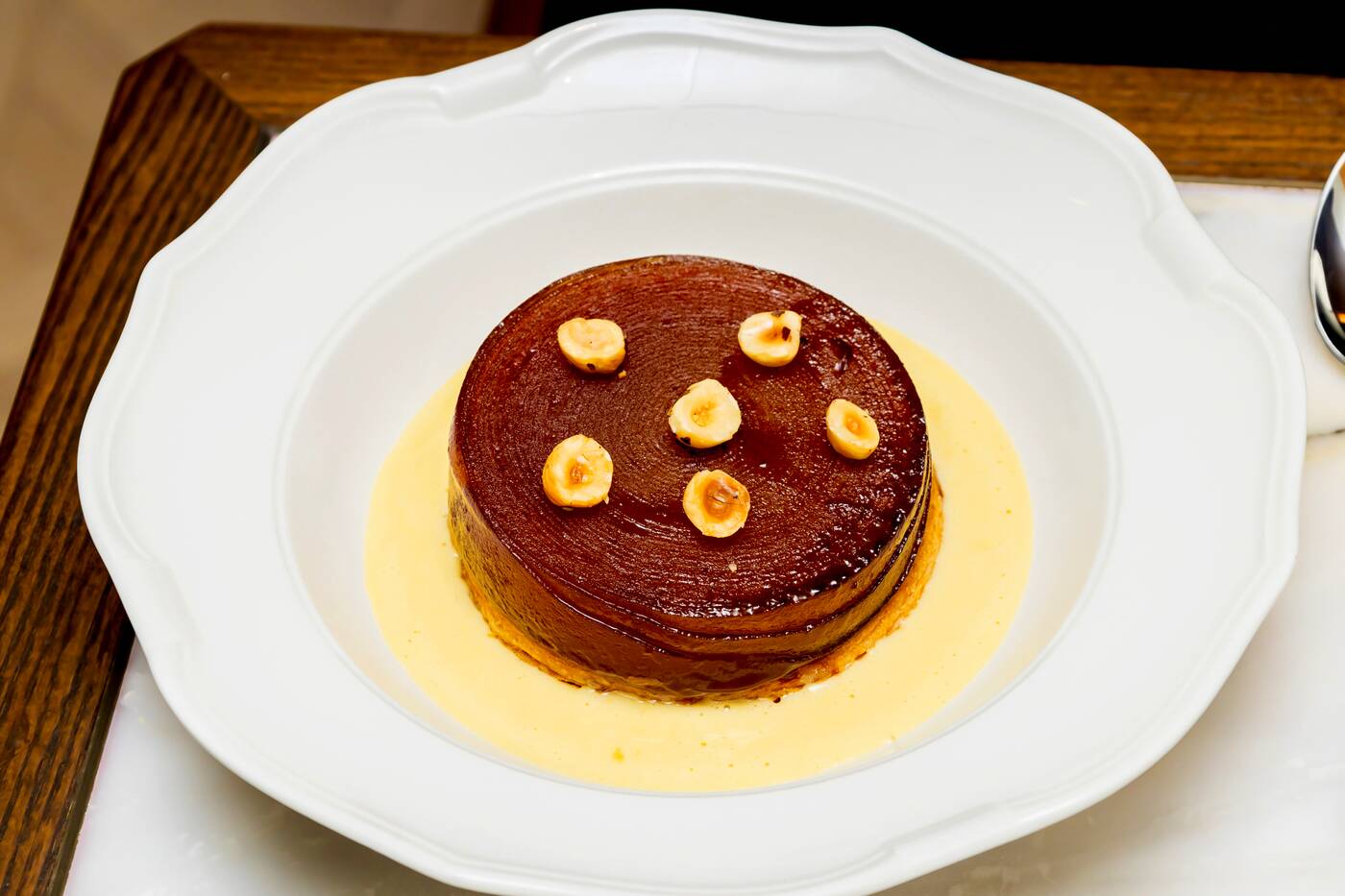 This gorgeous specimen is the Apple Tarte Tatin ($18) which features a spiral of caramelized apple on a crisp puff pastry base that’s topped with toasted hazelnuts, and Benedictine anglaise.

Besides the amount of work behind assembling the not-too-sweet dessert, I’m told the pastry preparation is similarly time-consuming. Not only is it cooked for 40 minutes in caramel before it’s cooled, but the dessert also gets cooked for another 40 minutes to achieve this finish.

The result is fall-off-your-chair delightful. It’s also one I don’t advise sharing unless you really like your dinner companion. However, I’d argue that if you liked them that much, you should each get your own tatin. Why deprive anyone of having all the joys?

Although the weather’s a bit chilly currently, Parquet also serves affogatos that are made with booze and is paired with house-made ice creams in dreamy combinations such as honey cinnamon with Calvados or a dark chocolate caramel with green chartreuse. 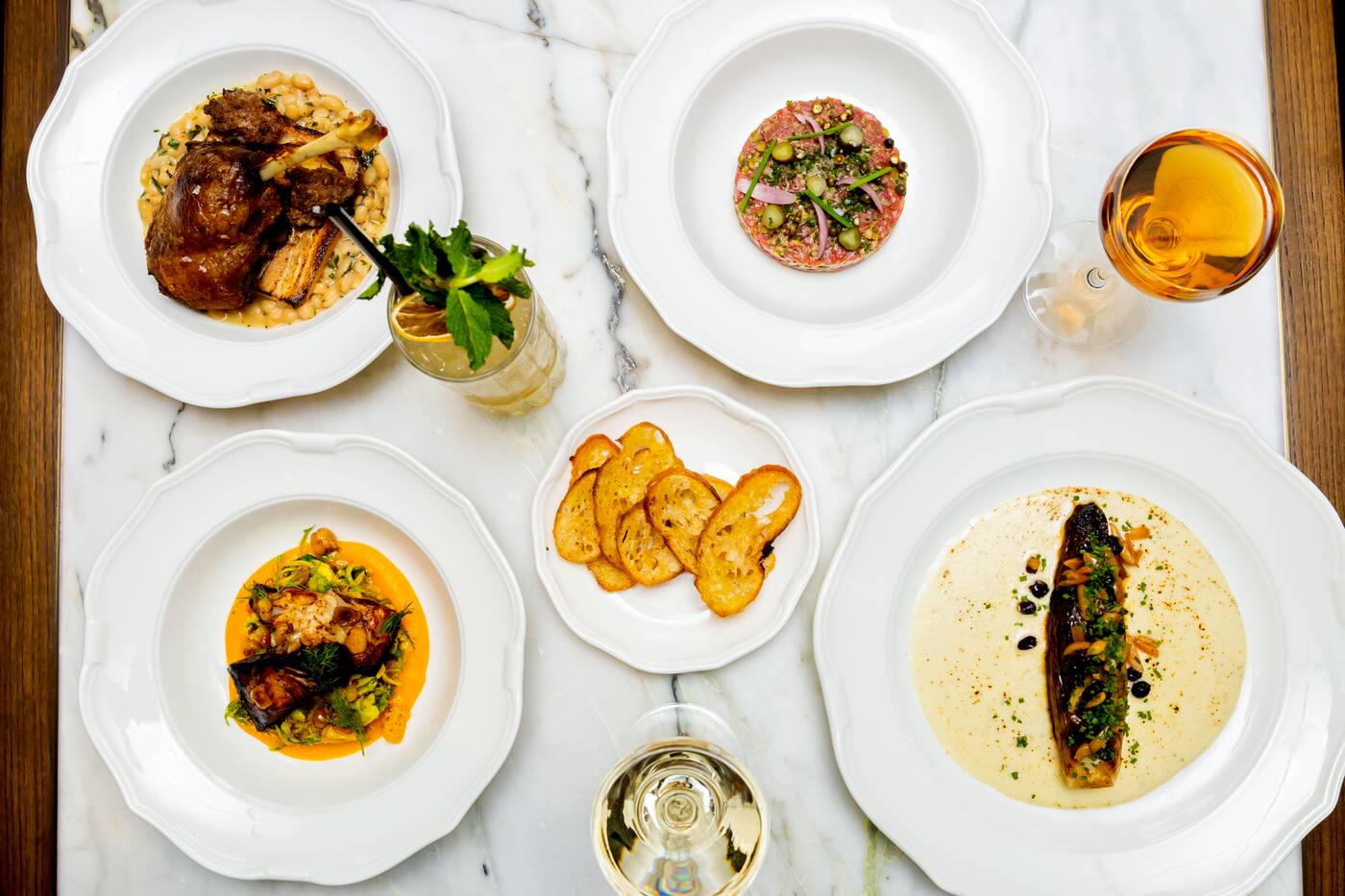 Not only am I impressed with the food on the plate, but I’m taken with how Dennis is able to manage his own staffing.

In addition to a positive work environment with fair wages, Dennis has even managed his books to hire a dedicated staff member whose job is to help the restaurant source prime ingredients from the food terminal, in addition to creating Parquet’s intricate desserts.

This helps to ensure quality products used in his food, which are an addition to the local ingredients he has access to due to the relationships he’s built with quality producers such as Linton Pasture Pork, or bread that he sources from Robinson Bread. 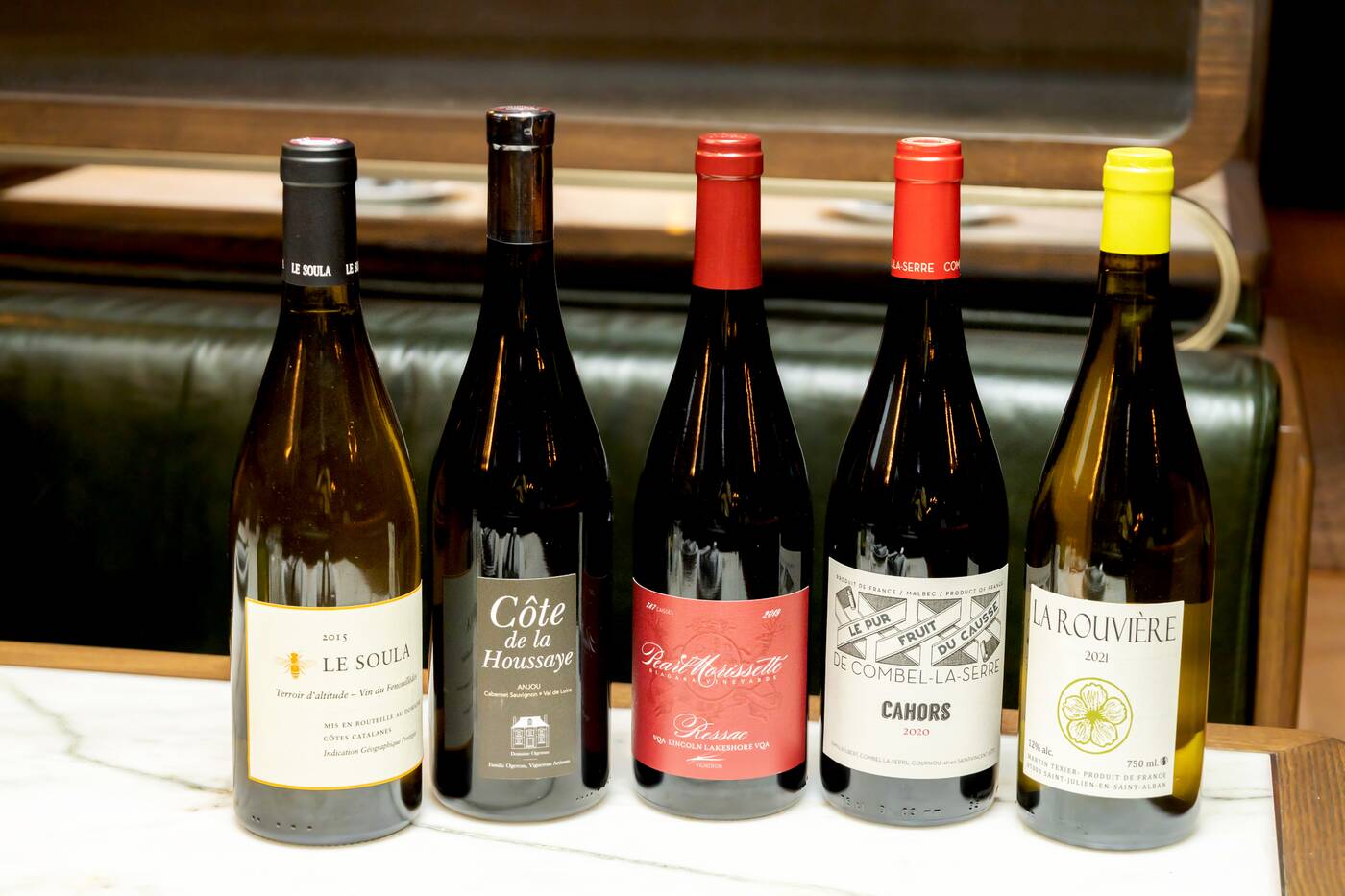 Not to be overshadowed, sommelier-manager Lexi Wolkowski, formerly of Bar Isabel, is behind the classic-leaning and strongly French wine list.

Filled with low-intervention bottles that have been produced through traditional methods, the approachable selection listed encourages conviviality and includes rotating unconventional options available by the glass. The charming selection is bolstered with some beers and ciders from France and Belgium. 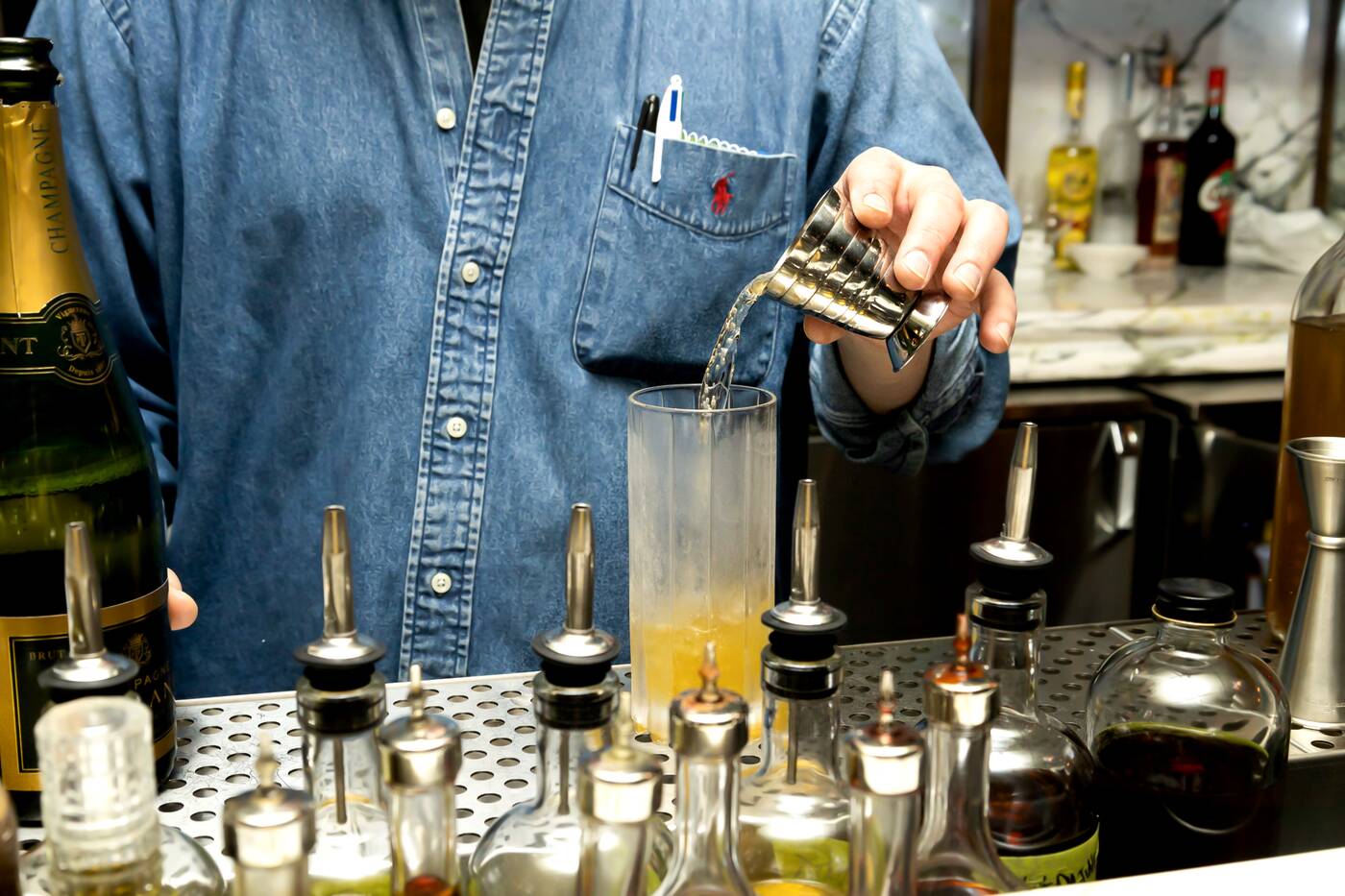 They’ve enlisted the assistance of George Fellows from Bar Isabel to create the thoughtfully crafted cocktail program. Featuring French-adjacent riffs of classics, they are nuanced, complex but accessible, and meant to compliment Dennis’ cuisine. 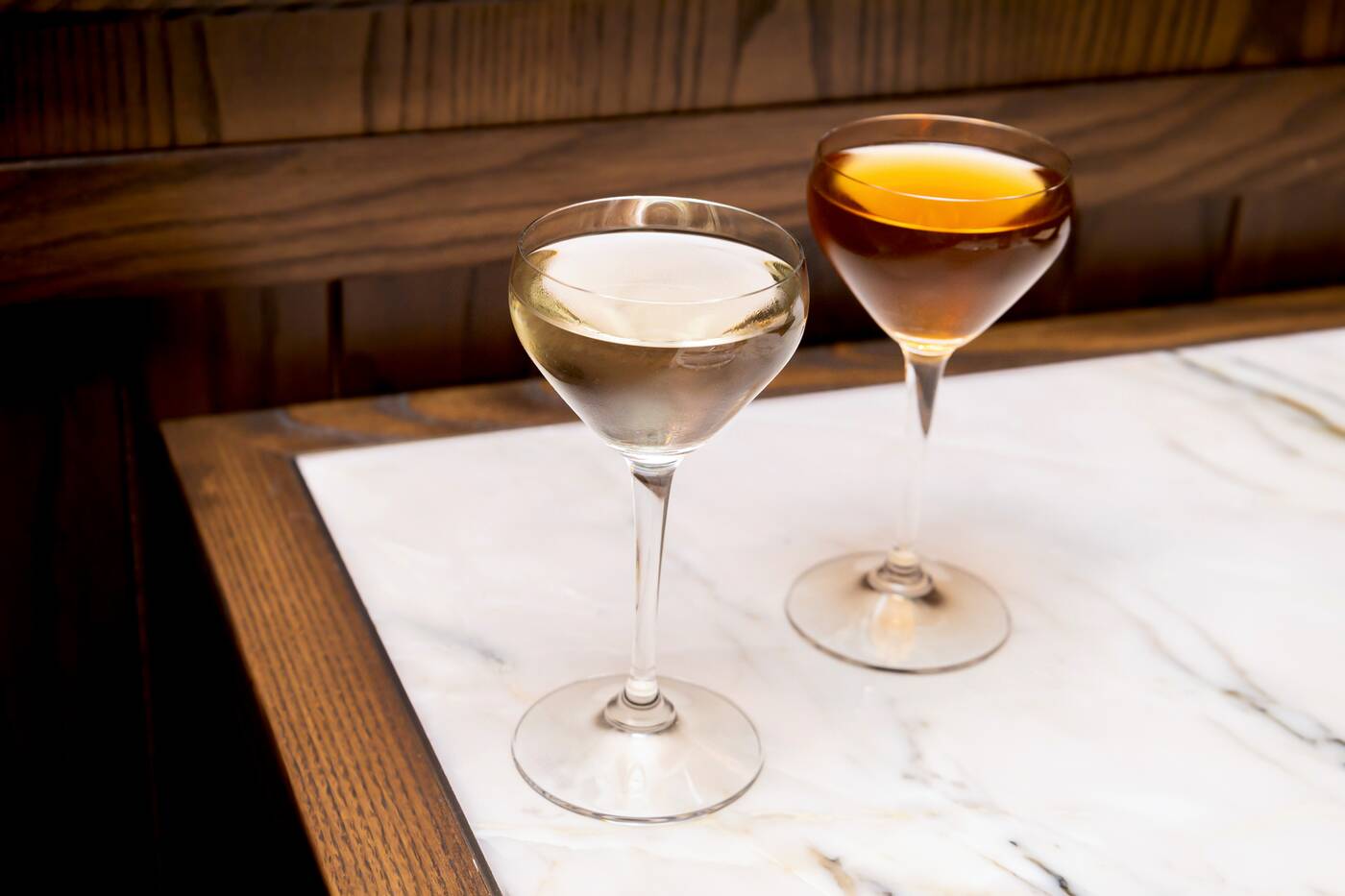 The Paris Syndrome ($16) is made from sake, Manzanilla, mezcal, maraschino and celery bitters. The well-balanced cocktail is a nod to how Paris is often romanticized in films and is almost briny-savoury due to the vegetal celery bitters. 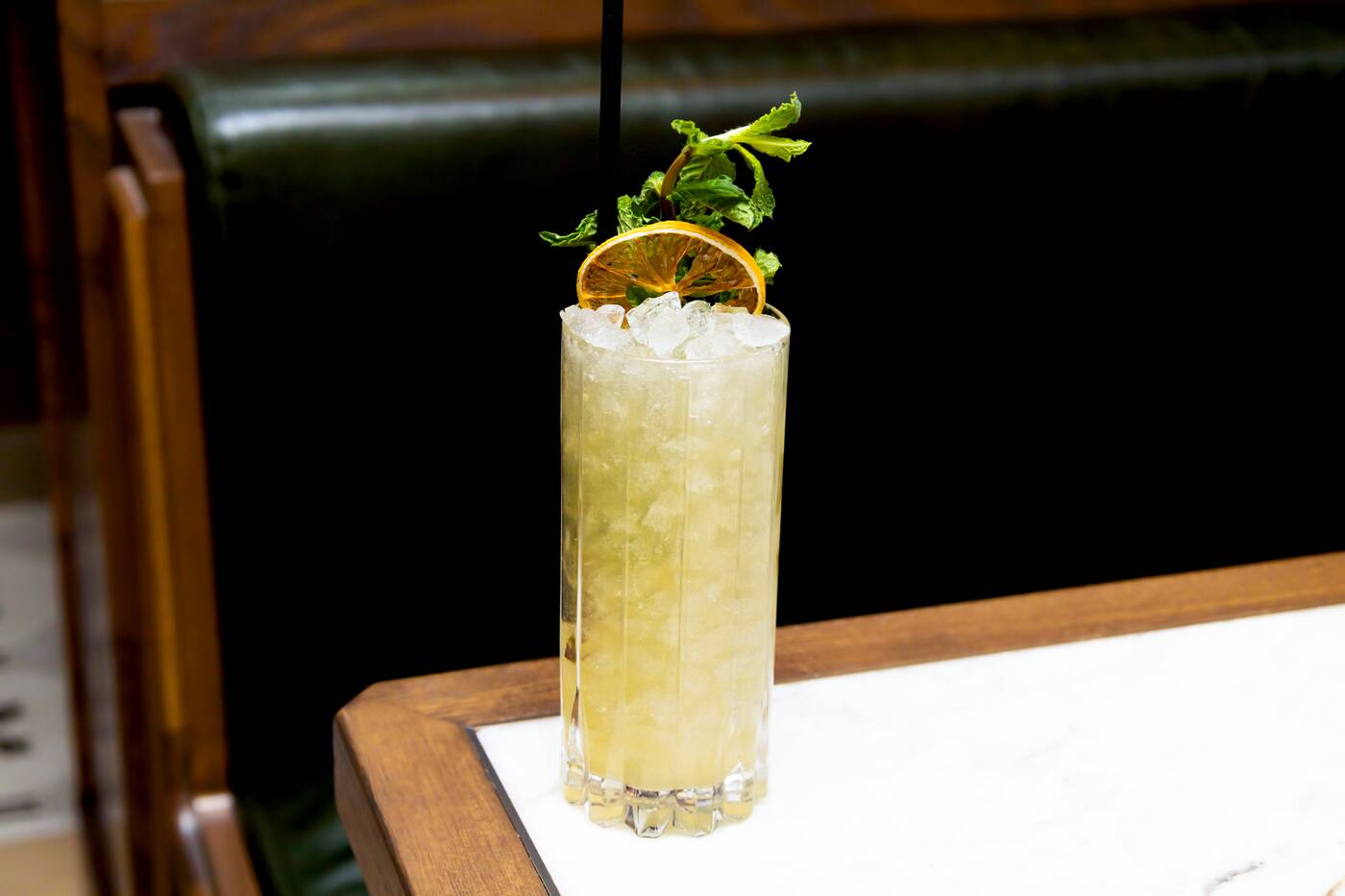 The Light Up Gold ($12) is a placebo cocktail that is composed of Seedlip Spice 94, chamomile and lime. 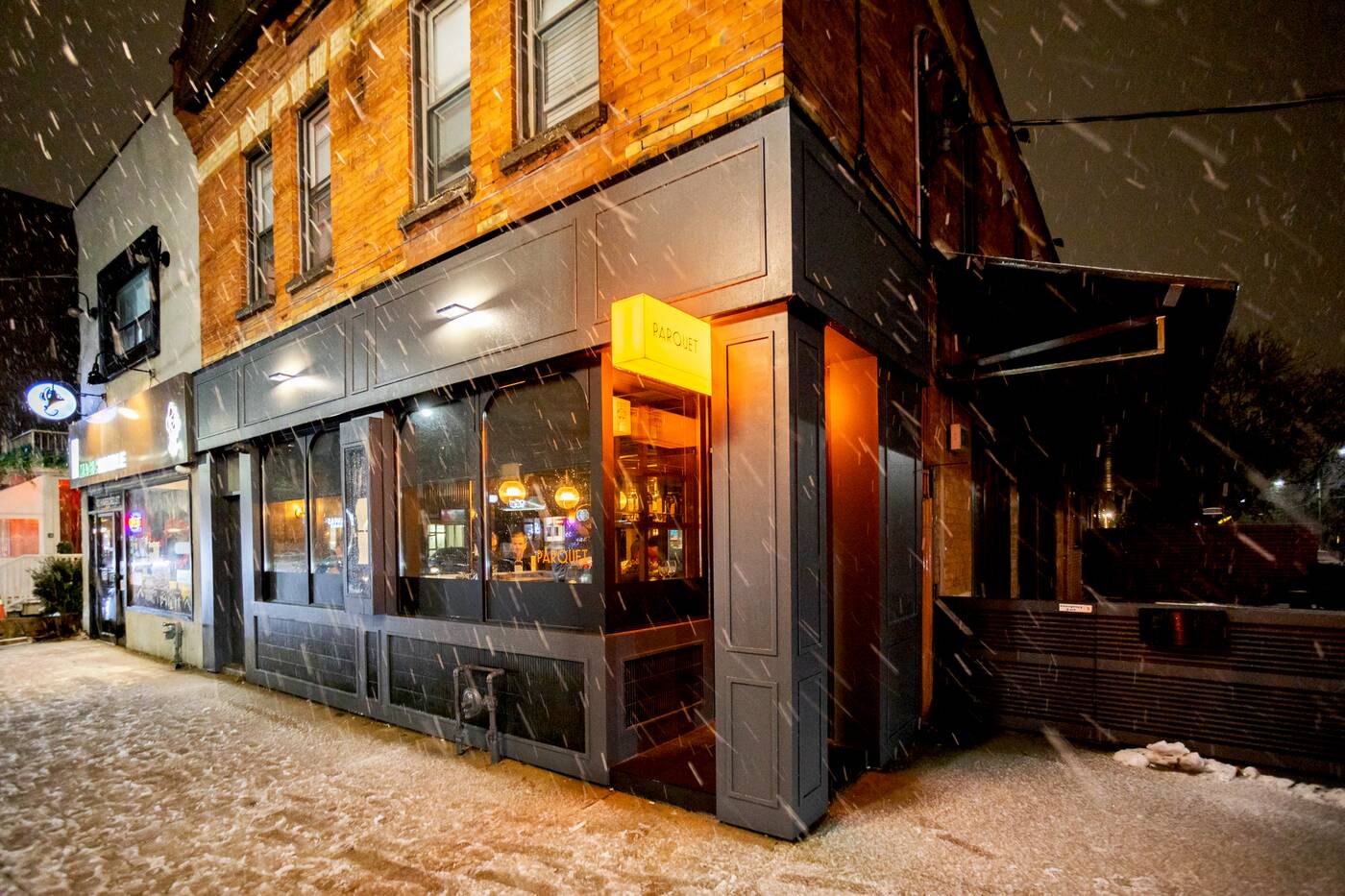 Parquet is the latest addition to what’s becoming Harbord Village’s small but mighty row of dining go-tos that counts Dreyfus, Piano Piano, Emmer and Rasa among the mix.

The Best New Restaurants in Toronto for 2022