La Banane is currently open but their offerings and services may be affected due to the pandemic. Please contact the business directly for more information about any changes. Is this your business? Please contact us if you would like to update this message.

La Banane, a French restaurant on Ossington that took over the space that was formerly The Saint, is a partnership between chef Brandon Olsen (CXBO, Bar Isabel, The Black Hoof) and King Street Food Company (Buca, Jacobs & Co. and Jamie's Italian).

This place has been a dream of Olsen's and his partner's, Sarah Keenlyside, for a while. Its entire concept, from the name and decor down to the menu, is their baby. 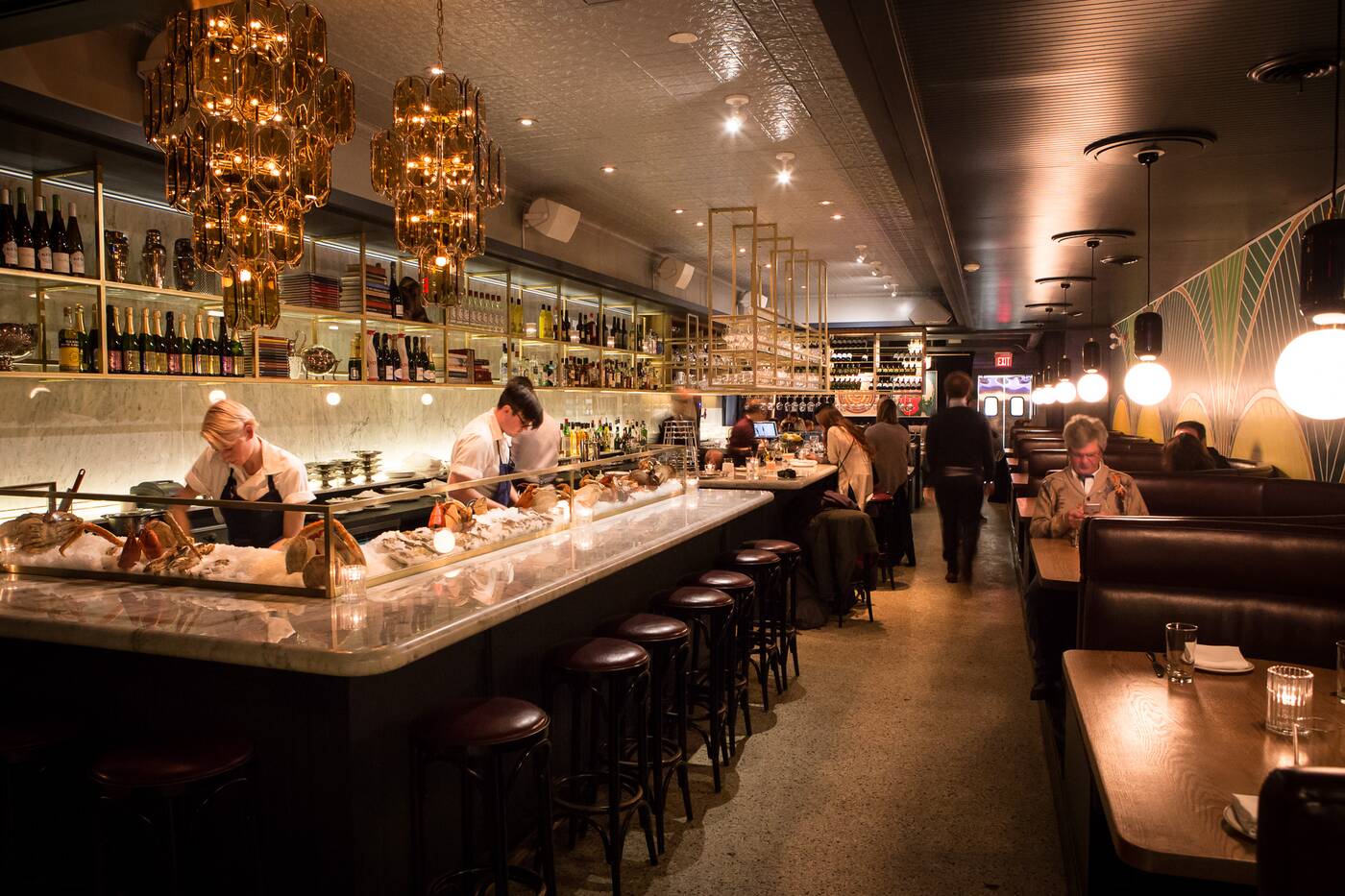 Why a banana? Olsen is known for being associated with the fruit (he frequently wears banana-print clothing). Bananas are versatile and have many cultural references, including the French expression "avoir la banane," which means one has a big smile and is happy.

"You can never be mad at a banana," he tells me.

There are three distinct areas in the restaurant: a front space, outfitted in all shades of green, with plush settees and library lights; the middle marble-topped bar area, with a raw bar and a proper bar plus rounded banquette seating across from them; and a back dining room. 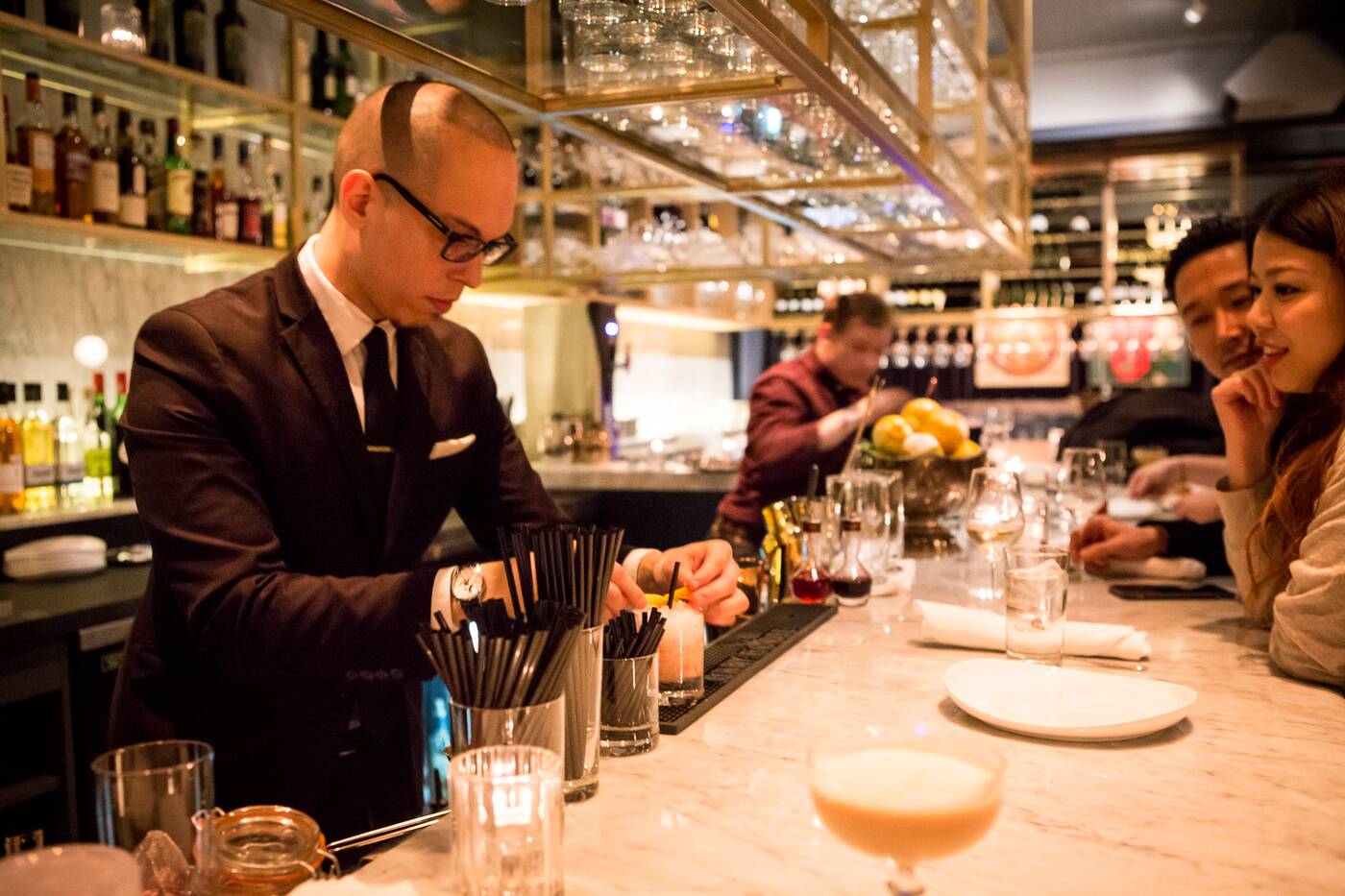 Along with Champagne, craft beer and cider, the bar serves up classic and house cocktails plus a couple of virgin drink options. 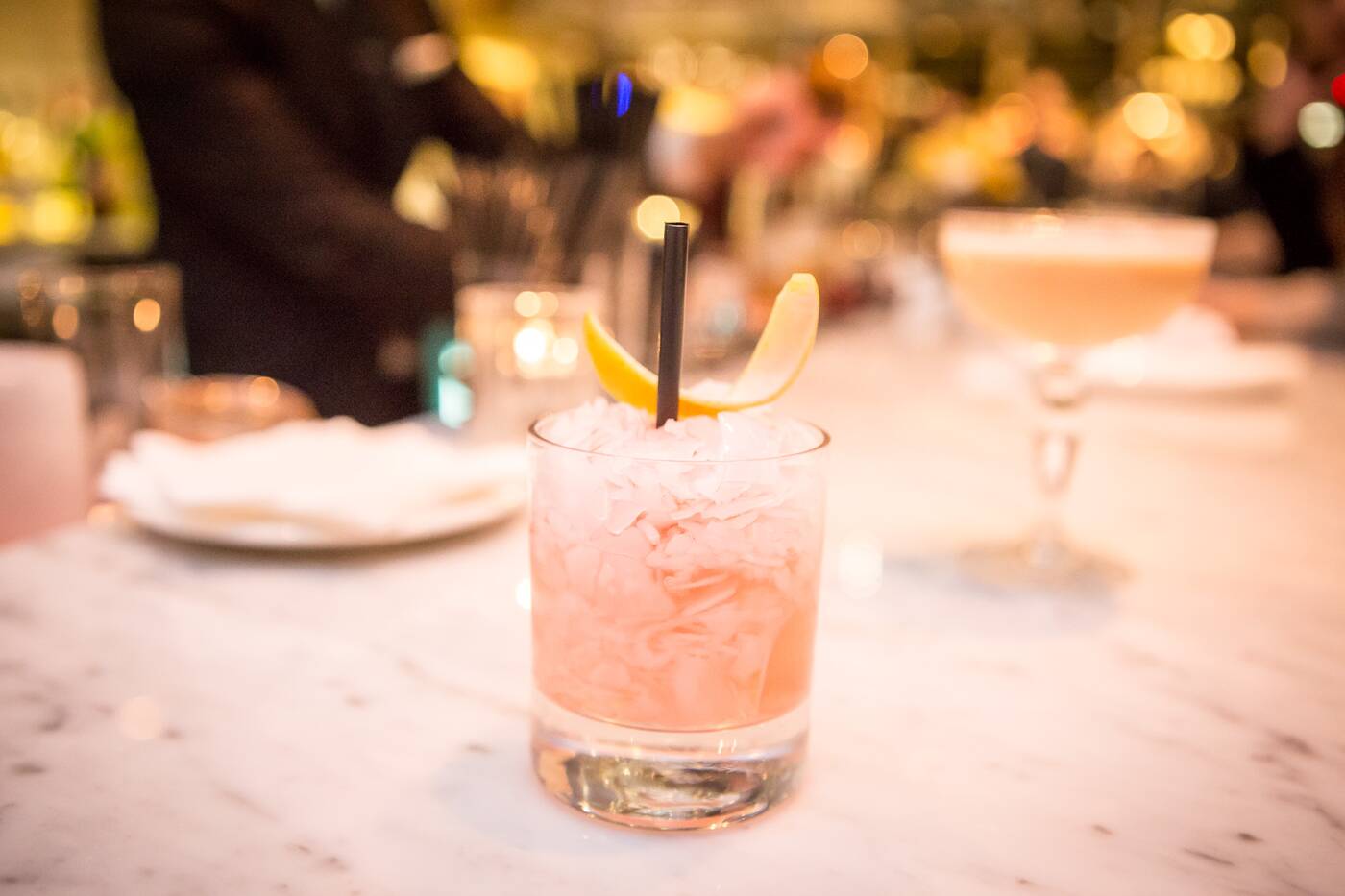 From the house cocktails, we try La Banane Royale ($15), a frothy concoction of dark rum, banana, cream and egg, and the refreshing Coquin Cobbler ($12), which contains Lillet, Peychaud's Bitters and grapefruit on ice. 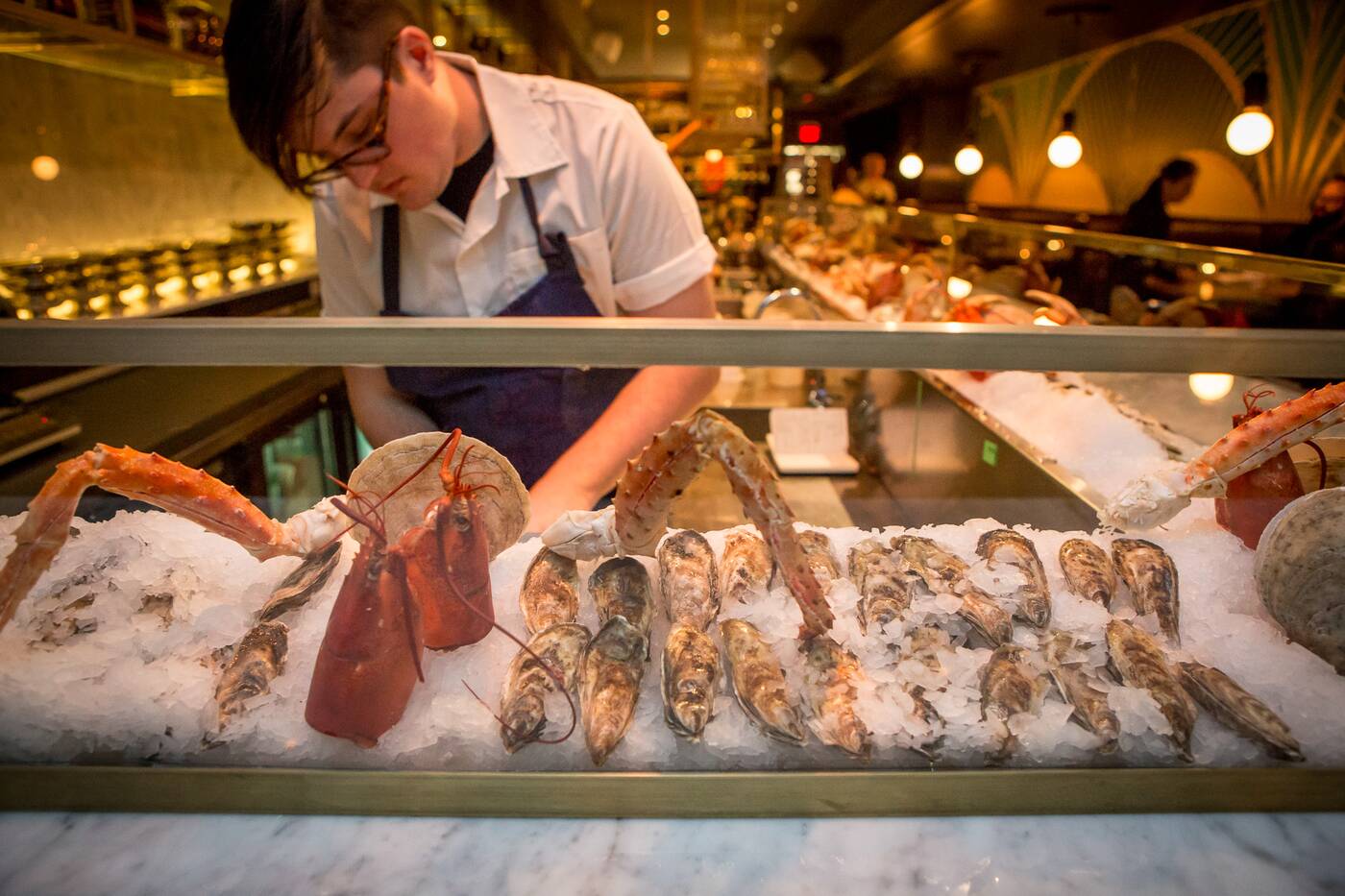 As for the food, the menu currently features the stuff Olsen and Keenlyside want to eat but feel they can't find in the city. Olsen and his chef de cuisine Basilio Pesce (Porzia, Canoe) are starting out with a foundation of classics from Olsen's repertoire and planning to evolve from there.

When patrons walk in, the first thing they see is the raw bar, which is stocked with sustainable and ethically sourced seafood from Hooked and Honest Weight. 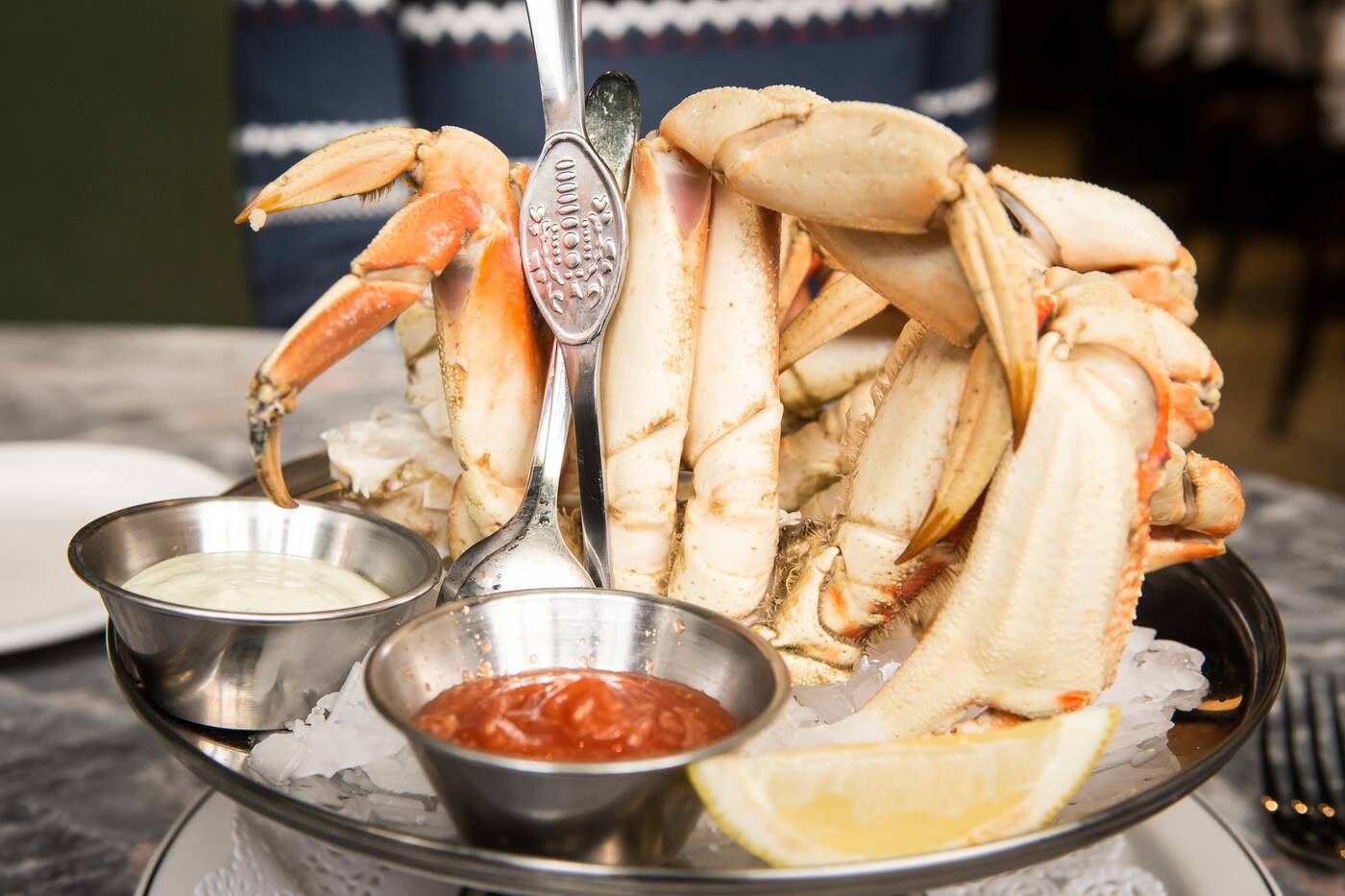 Fresh Dungeness crab ($26/$48) comes with tarragon mayo, cocktail sauce and a wedge of lemon, a starter that really makes you get involved and use your hands. 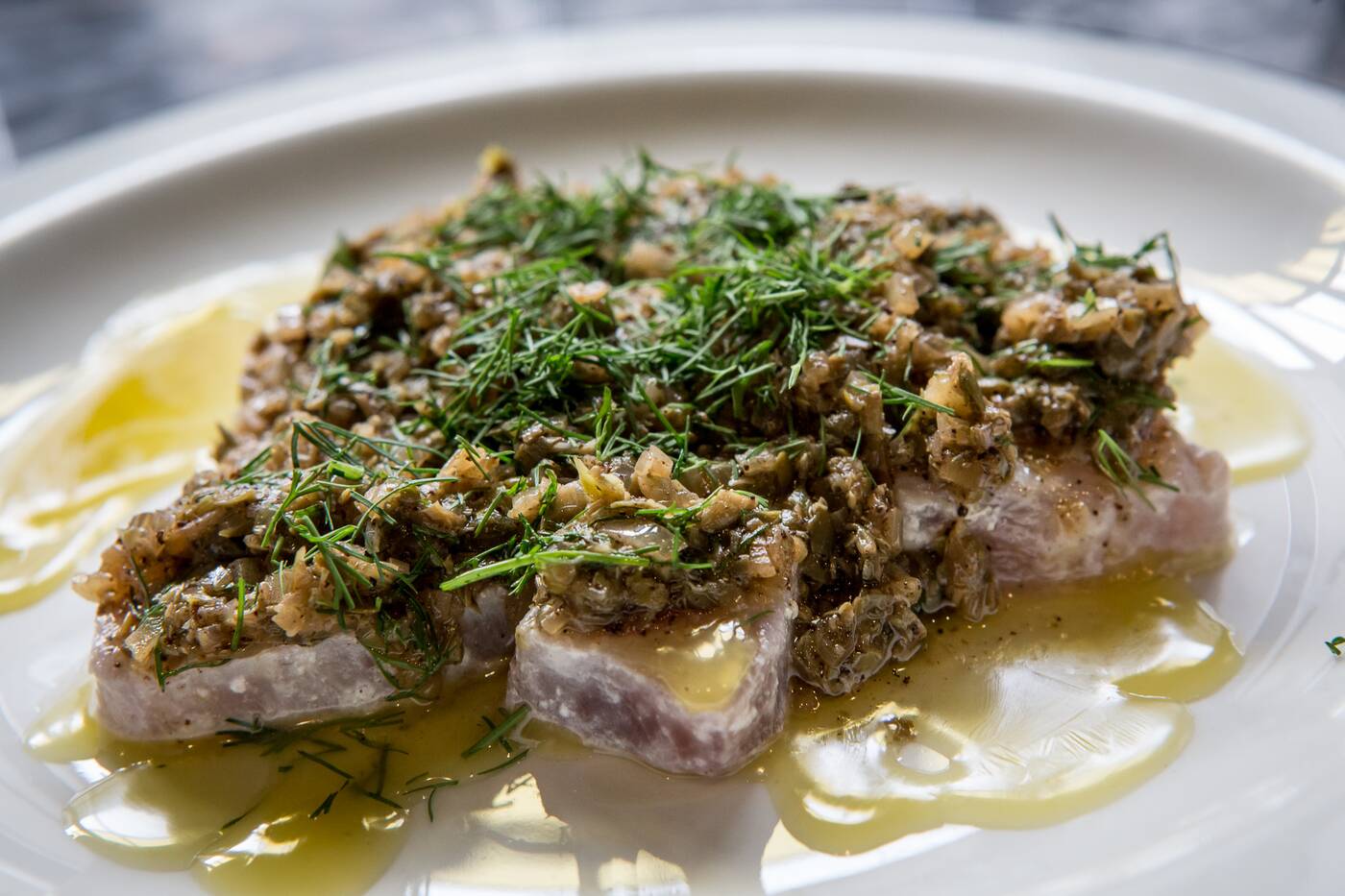 Of the entrées, I try the albacore tuna ($16) with brown butter, dill and capers. It's a tasty dish, and all the components, from the acidic capers to the slightly nutty butter (and particularly the addictive dill flavour), complement the tender pieces of raw tuna. 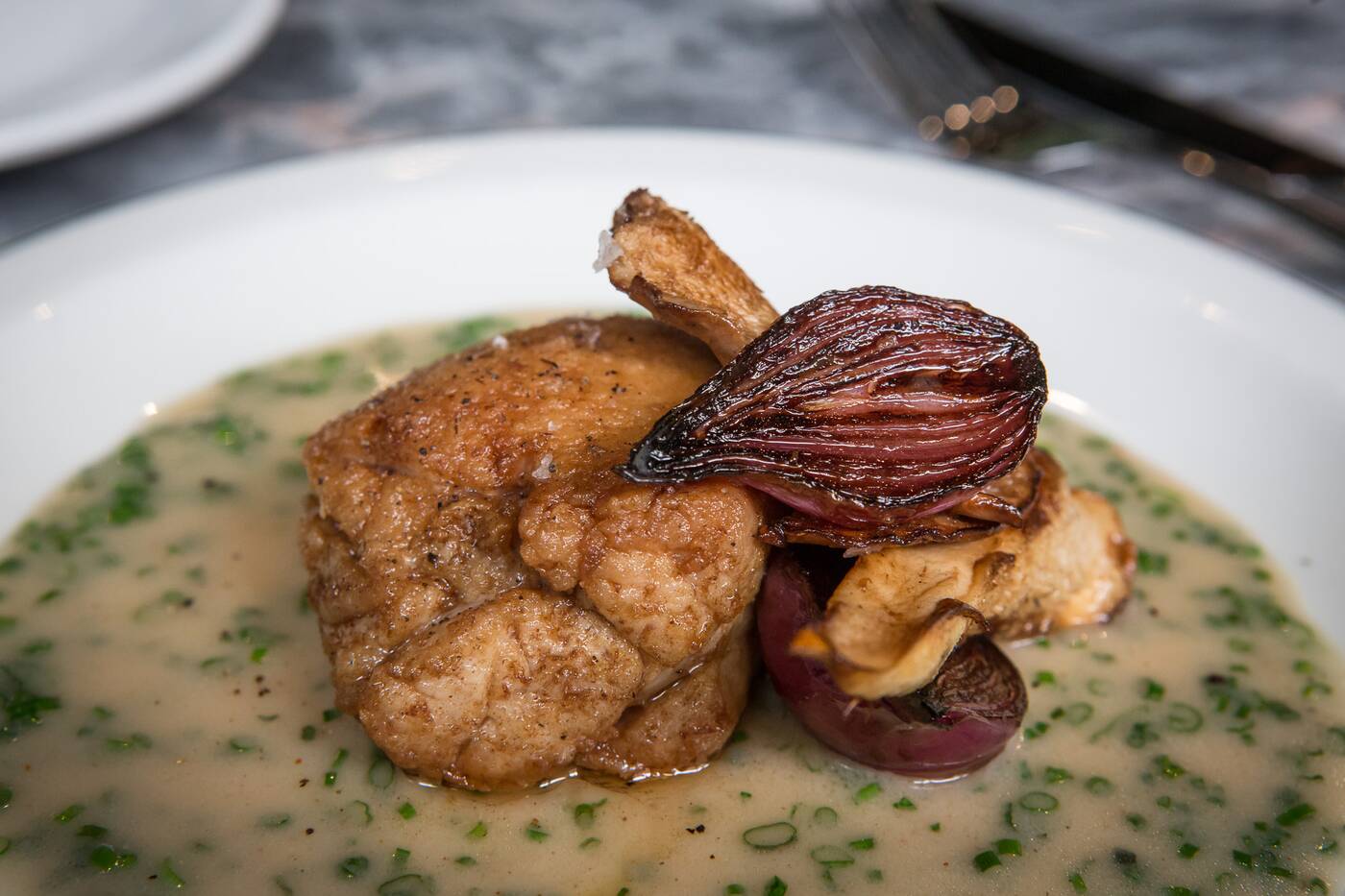 Sweetbreads and raw tuna was a dish that Olsen created at Bar Isabel, and here he's fine-tuned it by separating the two into their own distinct entities. Now the sweetbreads ($23) come with hedgehog mushrooms and pickled, grilled red onions surrounded by a pool of blanquette sauce.

Some people may feel squeamish about eating sweetbreads (to be clear, they are neither sweet, nor bread), but I love the stuff when it's done well, and here, it's delicious. The seasoning is perfect on it and the exterior is slightly crisp while the inside is creamy and soft. 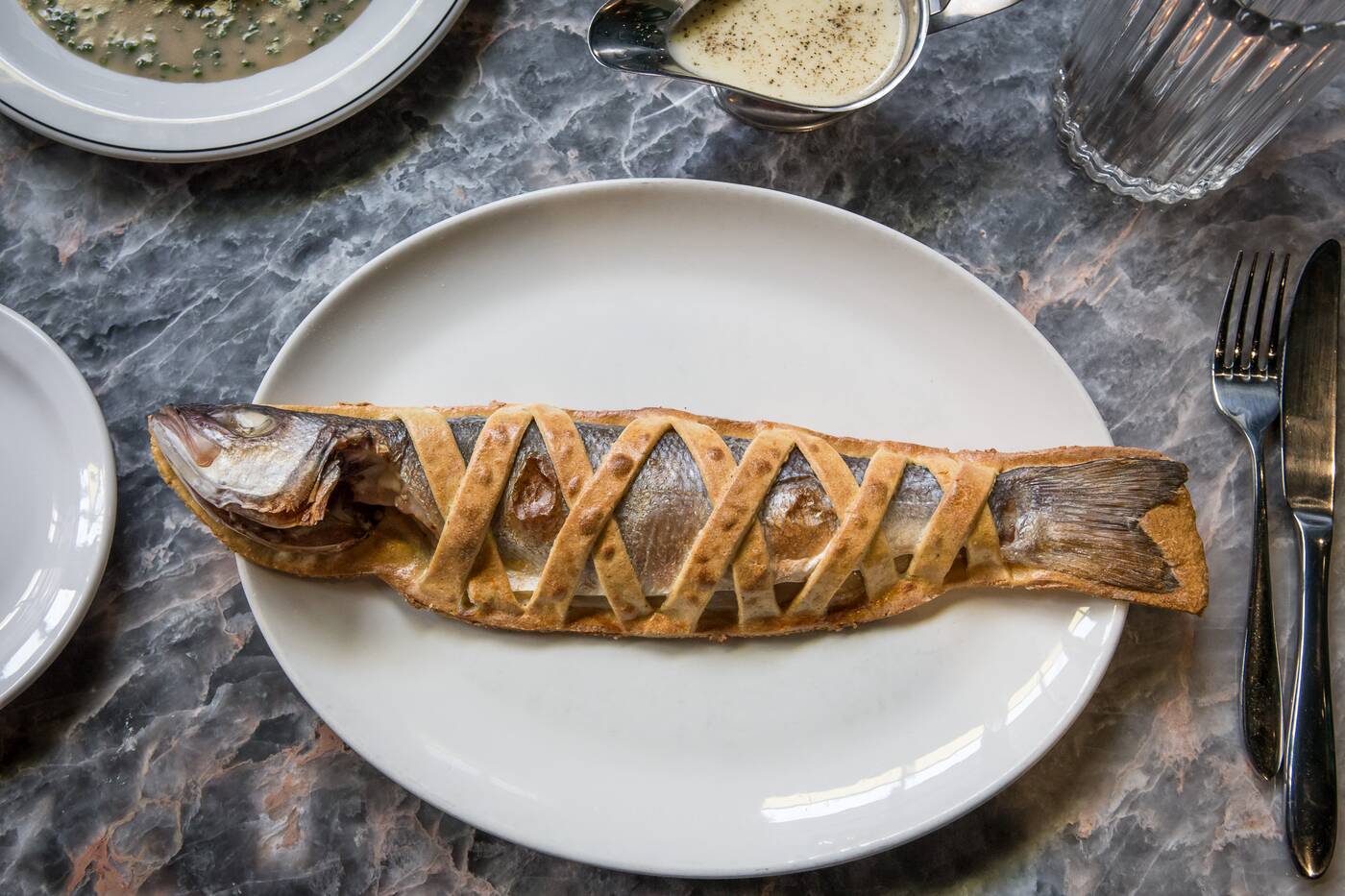 Eurobass en croûte ($32) with yuzu beurre monté is impressively presented whole before it's taken to the back where it's carved and served with a side of zucchini.

For dessert, the thing to get is the Ziggy Stardust Disco Egg ($45), made at CXBO. This chocolate egg made with apricots, ancho chillies and coffee beans is like a big, adult-version of a Kinder Surprise, as it's filled with single-origin Peruvian dark chocolate truffles. 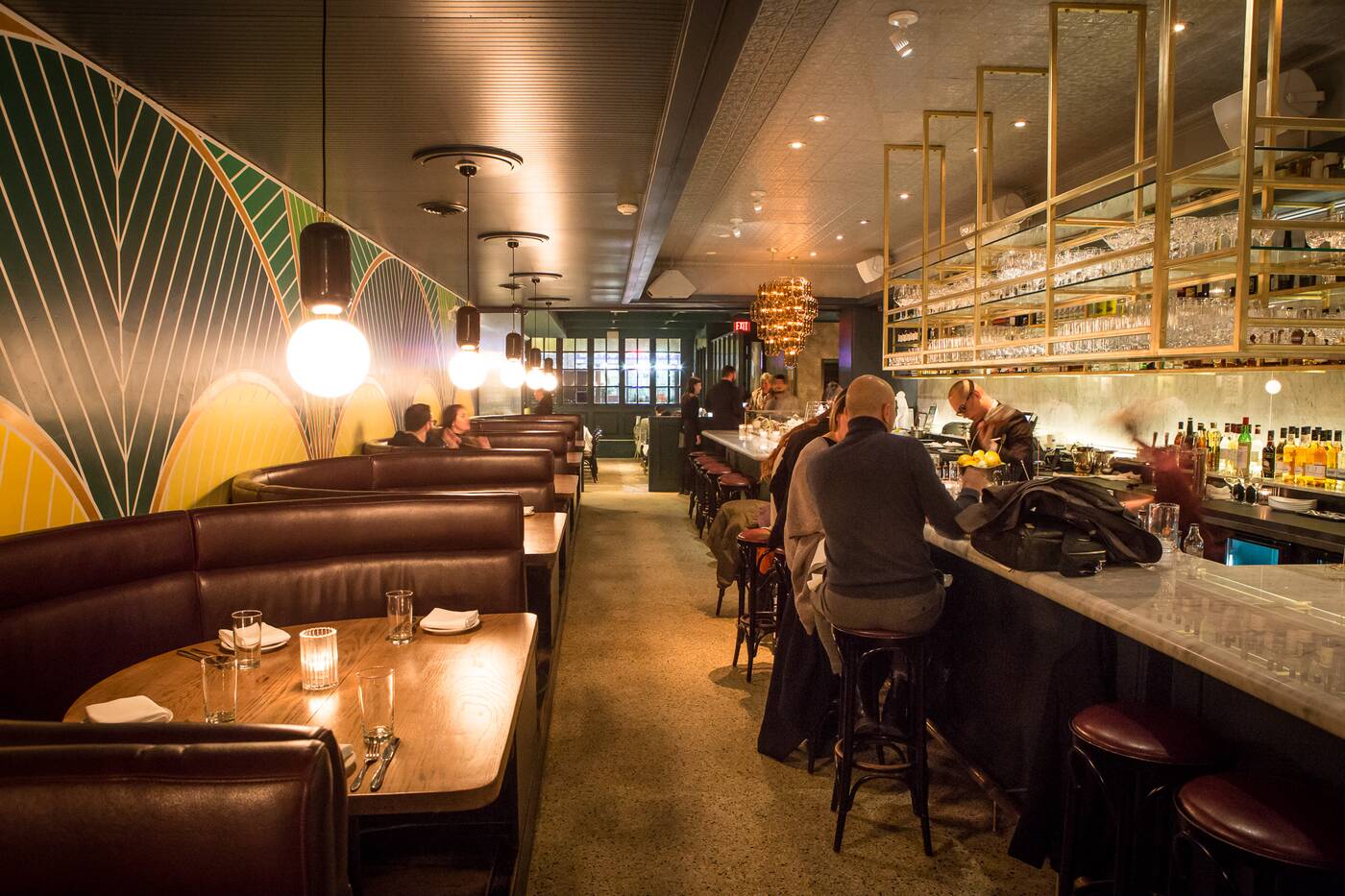 "I hope you like disco because there's a lot of it," Olsen says. He likes to blare old-school disco tunes while he cooks at home, and he wants it to be no different here.

Olsen is a fan of the classics, so understandably he doesn't want this place to be just a flash in the pan: "I want it to be a Toronto institution in 25 years." 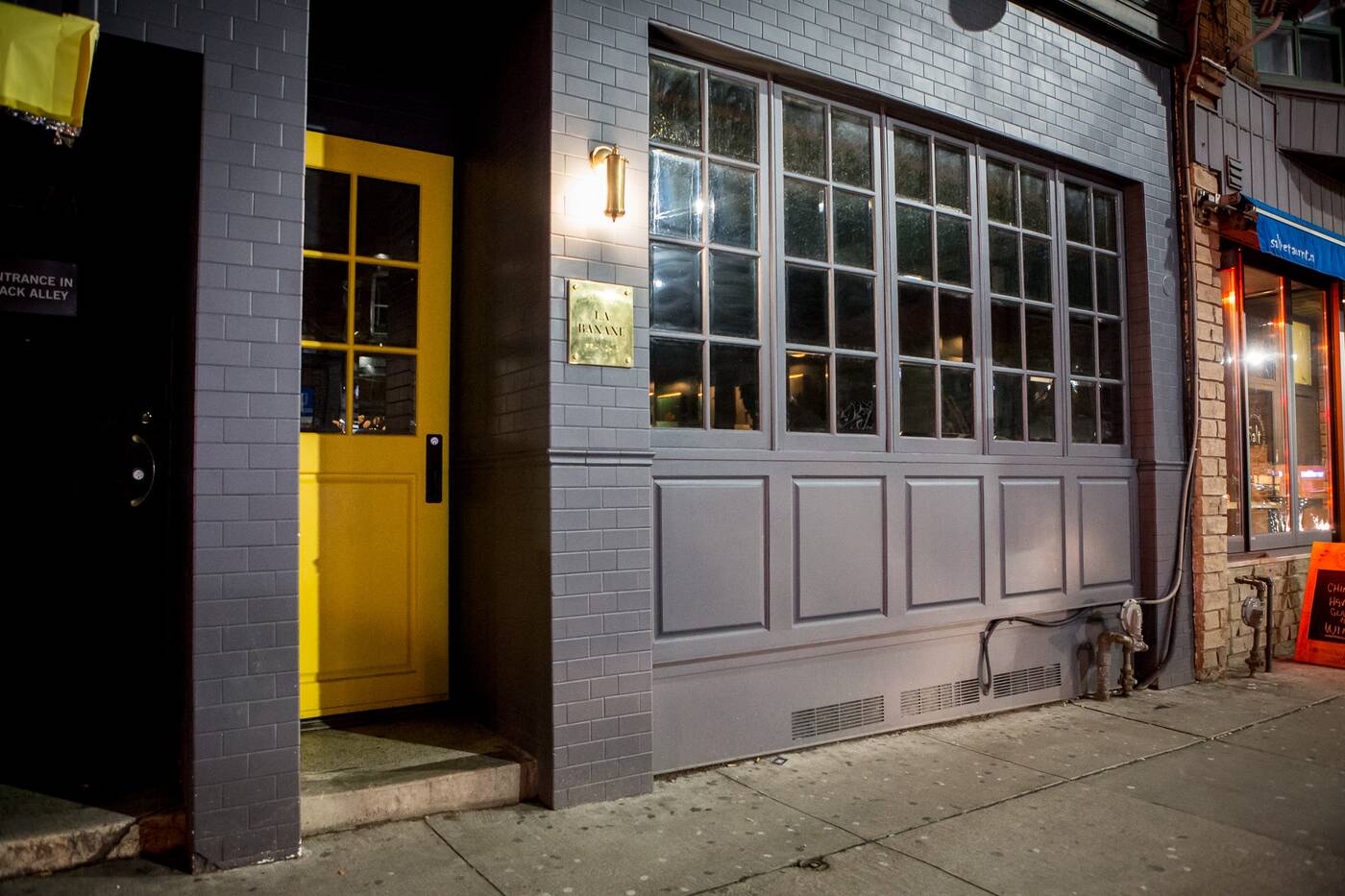