There's nothing that shows the state of Toronto's ridiculous housing market quite like one of our token "murder houses" — terrifyingly decrepit homes that go for shockingly high prices despite the fact that they are total gut jobs.

Now that the average detached home in the city is now over $2 million and the average cost of any type of home in the entire region has hit more than $1.2 million, the real estate market has definitely gotten fun lately, depending on your idea of the word "fun."

Houses in the nearby 'burbs sell for $1 million despite being boarded up and filled with literal garbage! Others outside of the city list for the same price even though they've been completely run-down and abandoned for a decade! Shacks go for a whole $2.5 mill! Unfinished buildings for $1.3! And homes sell for more than $1 million over asking in less than a week! Great stuff, really.

One new listing in the city is reminiscent of all of these other exceptional (in the worst way) homes, with a sky-high price tag for what you're actually getting. 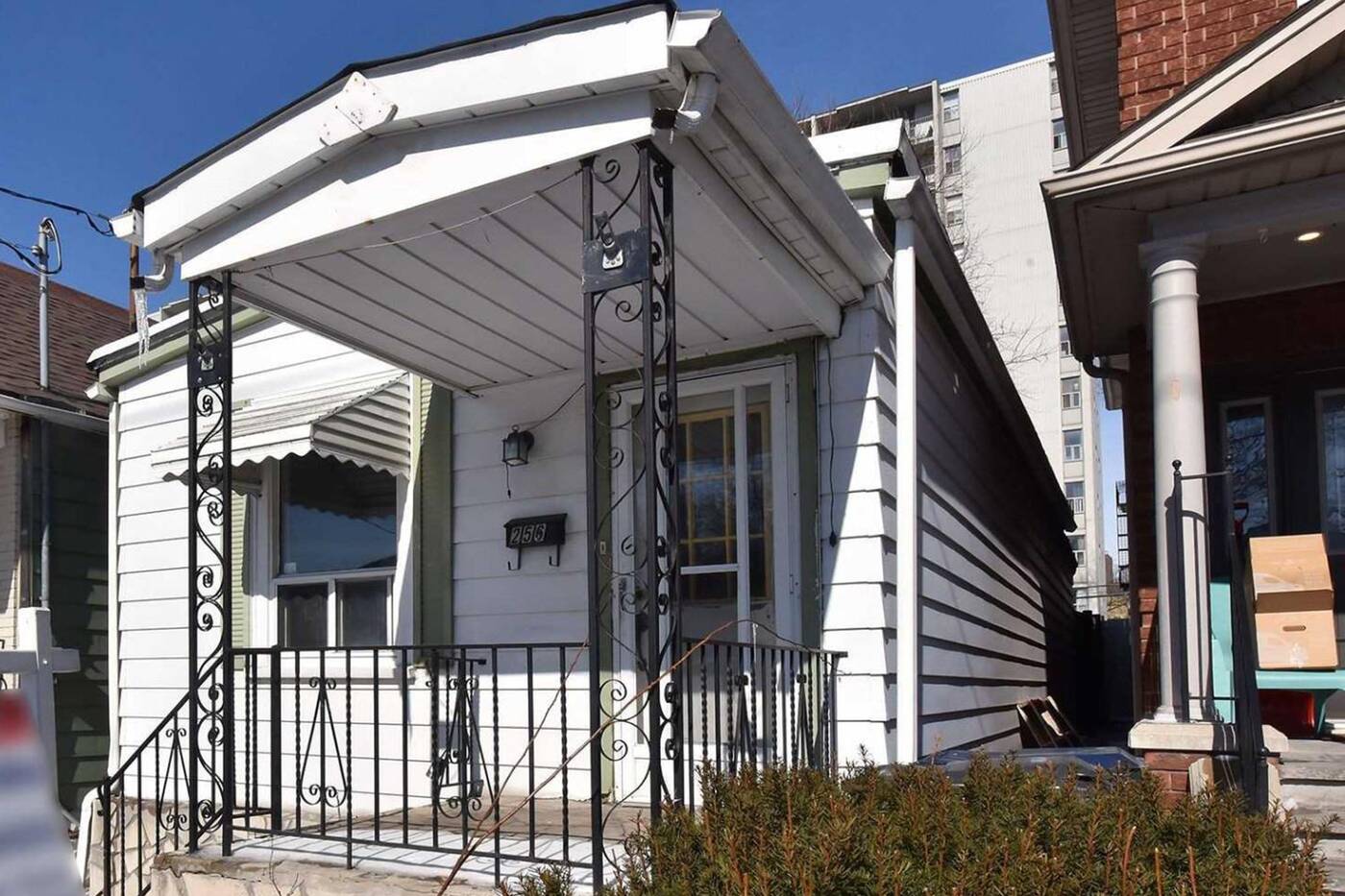 The exterior of the home needs a facelift, but not as much as the interior.

As a detached home on the market for less than $1 million, it's definitely a rare find, but the good news ends there unless you're a buyer who absolutely loves a massive project.

Listed at $949,000, the squat little three-bedroom, one-bathroom bungalow near Cosburn and Donlands in East York doesn't have much curb appeal, though with the right vision and funds, it could have a lot of potential. 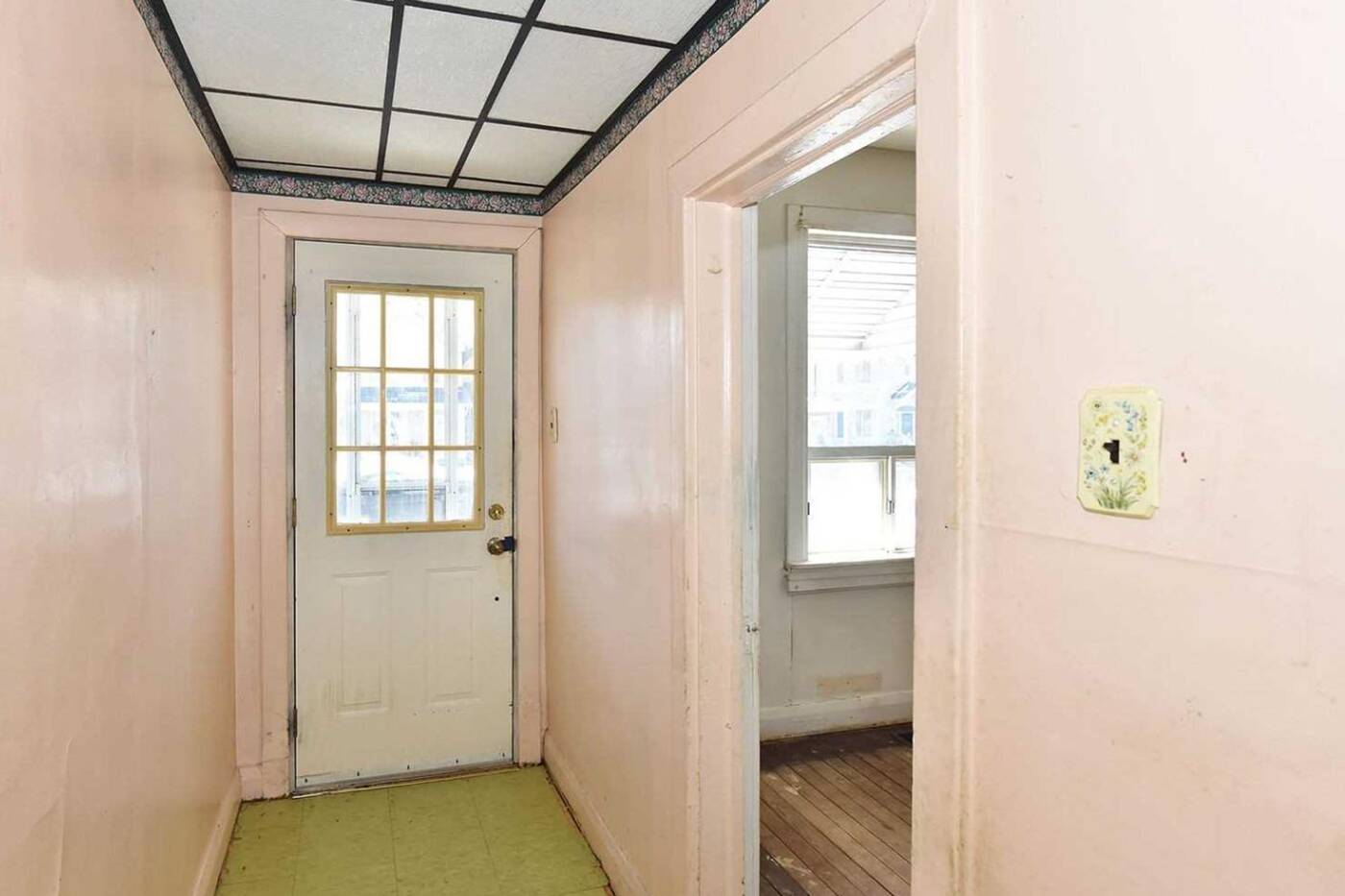 Shiny, dingy walls abound, as does terrible flooring and ceiling choices from decades ago.

Unfortunately, the inside is even less charming than the dated, vinyl siding-clad exterior, with a tragic semi-gloss paint job (who chose these colours?!), cheap elementary-school-esque ceiling tiles, and a thick layer of grime throughout that is unignorable.

The list of what needs to be completely redone in this house is extensive: every surface of every room, essentially, with not much worth salvaging aside from the bare bones.

She's really giving 15 Rebecca Street, for those who remember that horrifying house that ended up selling for $675,000 in 2018 and was flipped for $1.4 million last year. 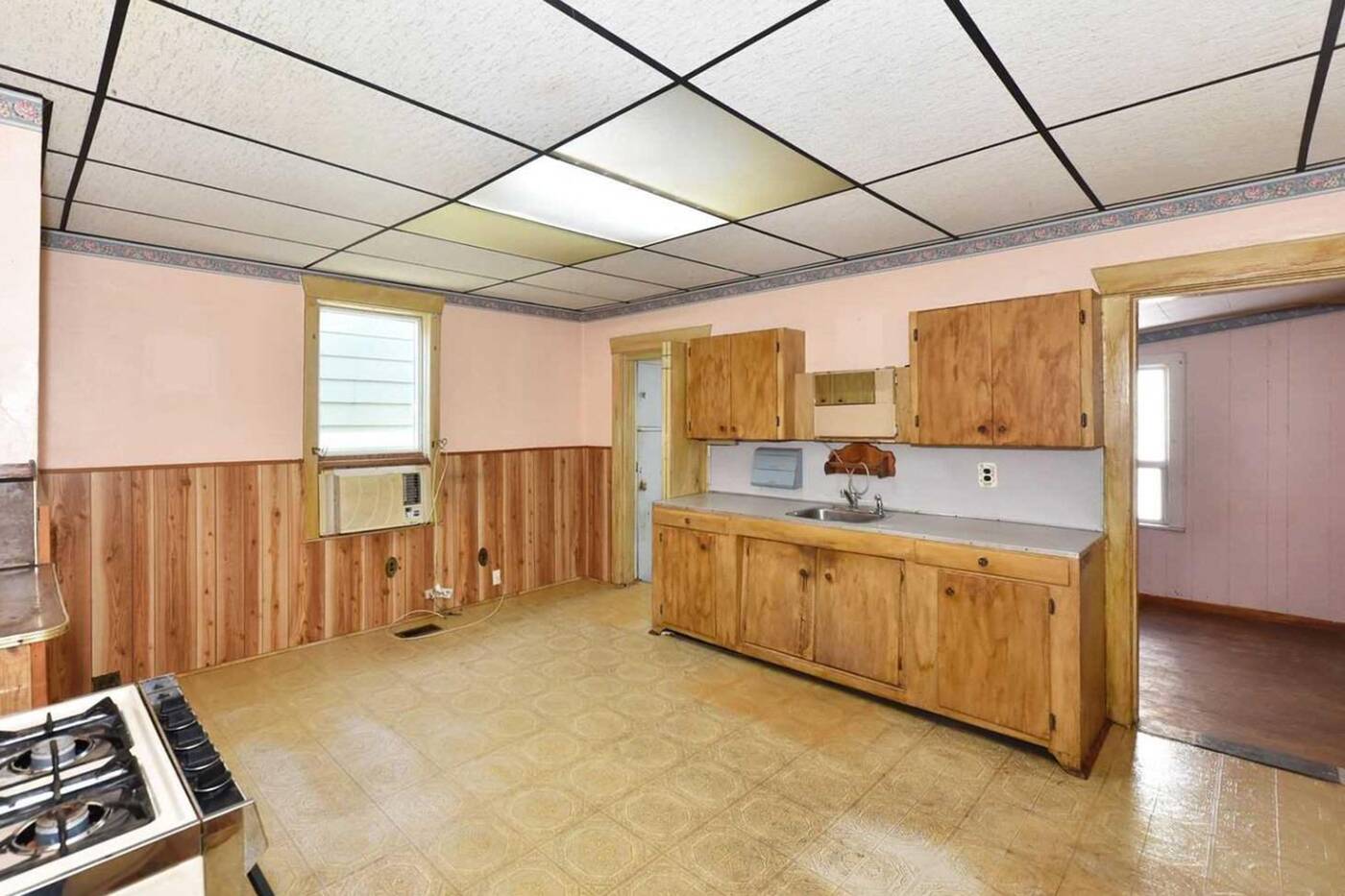 Like every other room, the kitchen needs a complete renovation.

Though the whole place has generally sinister vibes, the unfinished basement is perhaps the worst of all — it gives the Evil Dead cellar a run for its money — and its low ceilings beg the question of how functional of a space it could really become.

The listing says that the home comes "as is" — two words that say a whole lot about its condition. 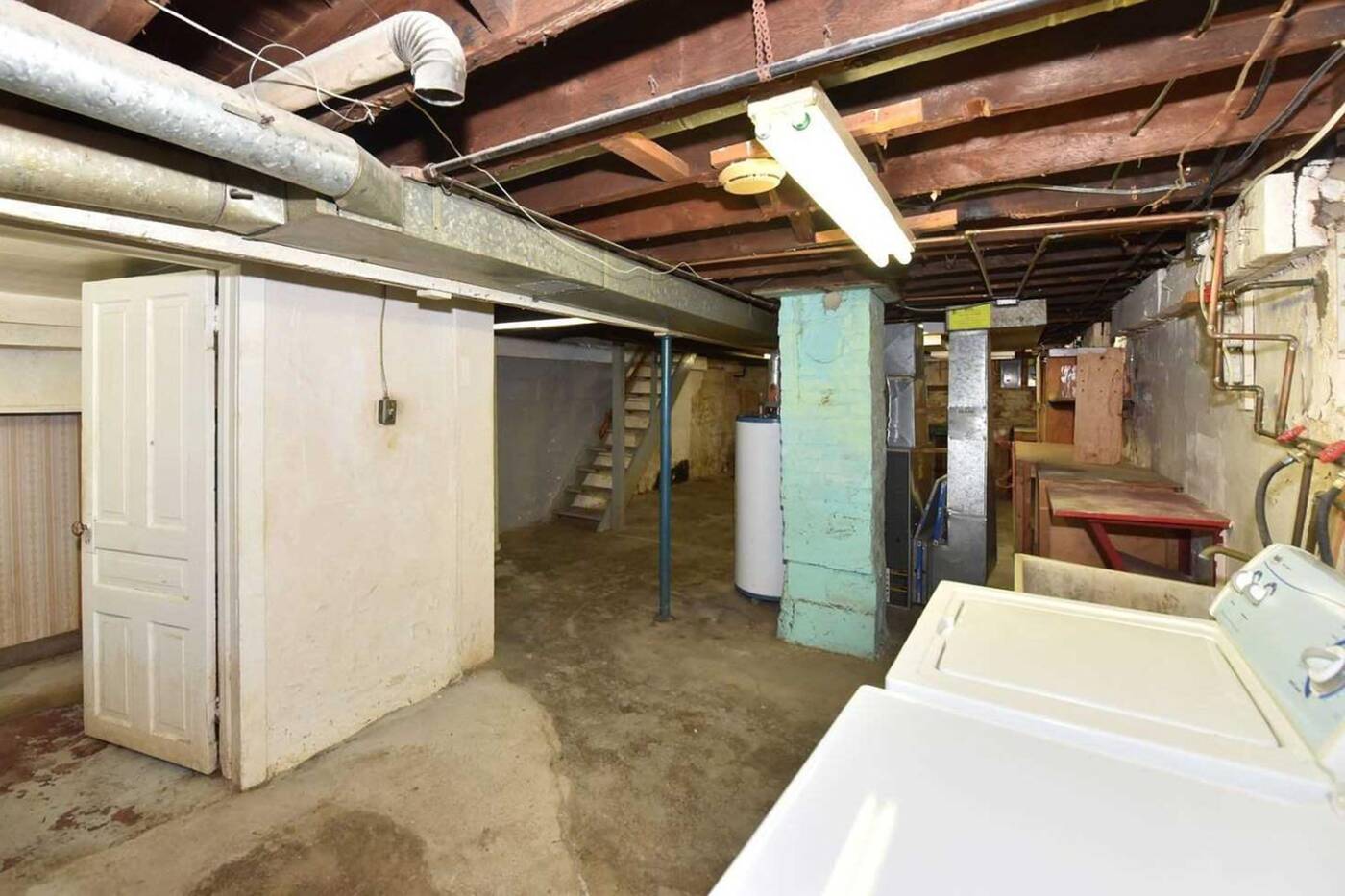 Kevin McCallister may have been able to conquer his fear of the basement in Home Alone, but this lower level is far scarier.

The one redeeming factor that may make this place worth the price tag is an extra deep backyard (with shed!), given that the lot is 20 feet by 150 feet.

It also has parking for two cars, and a rather anticlimactic list of "extras:" gas stove, furnace, washer, dryer, 100-amp electrical service, a shed, a wall air conditioning unit and a hot water tank. Joy! 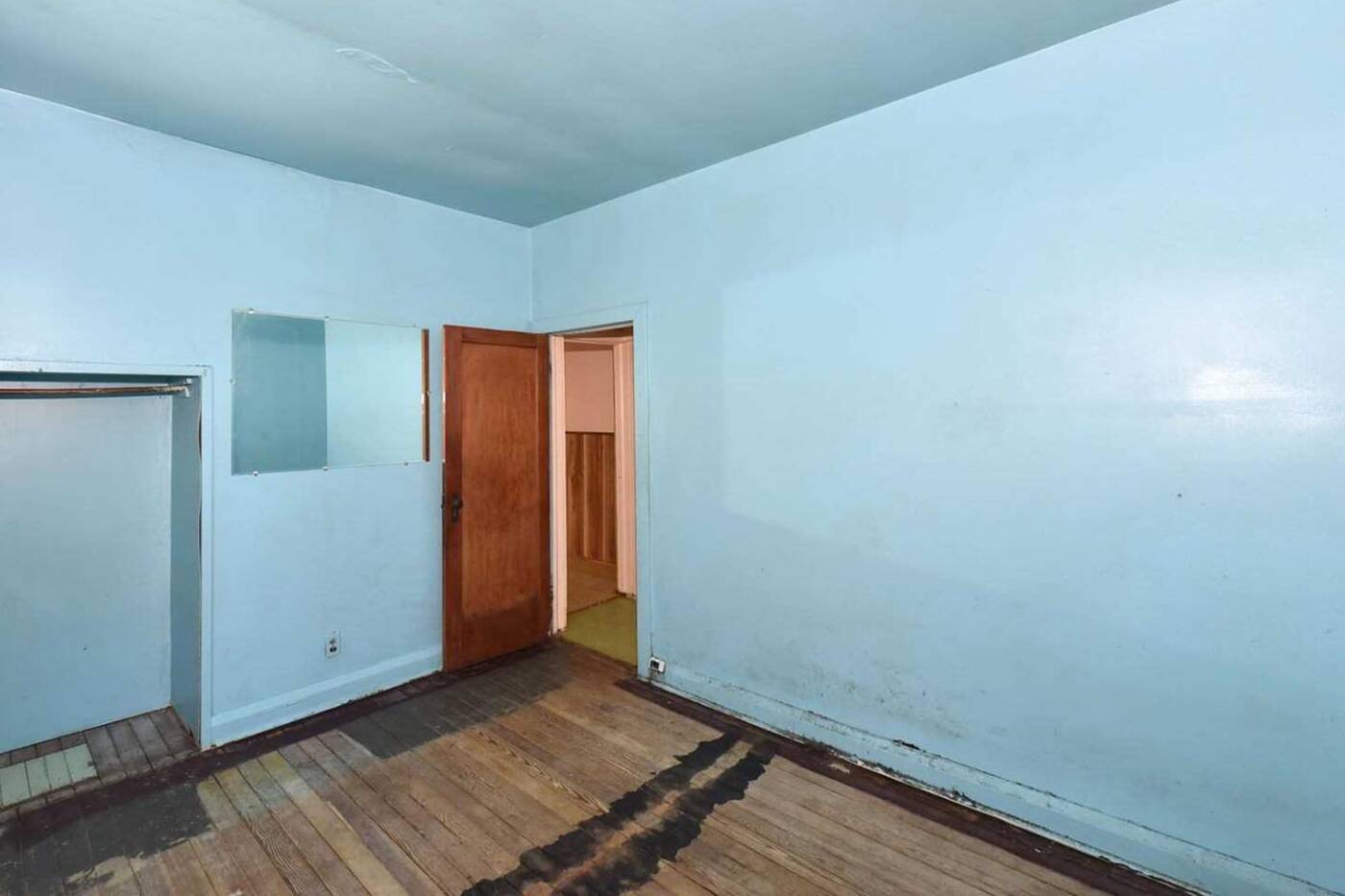 All in all, the home is being touted as an "incredible opportunity" for "builders and contractors," and we all know that despite its present shape and the work it will take to fix up, it will likely sell for way over the asking price.

"Fresh clean slate to renovate or build your dream home," the listing from RE/MAX Crossroads Realty Inc. reads. "This adorable 100-year-old East York home has so much potential!" 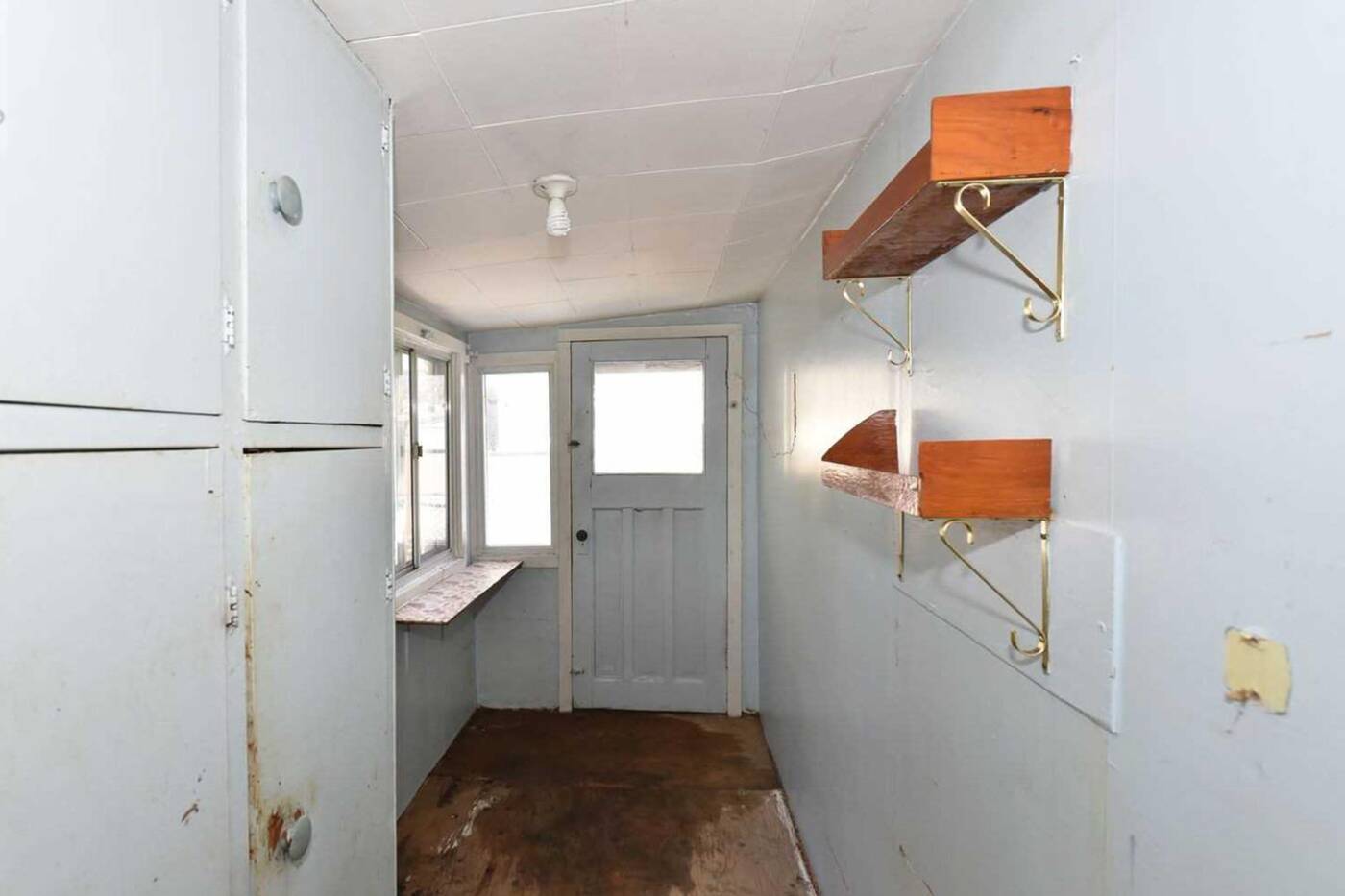 Lots of shelving and cupboard space that you'll want to rip out immediately!

Potential for nightmares, ghosts and months of time and money spent? Yes, and though this home feels quite murder house-y indeed, at least it wasn't literally the scene of such a crime — though in Toronto, even those do seem to sell for many millions of dollars.