The relentlessly sharp rise of home prices in Canada's largest cities remains, as it has for years, a major source of anxiety among younger generations who don't yet own property and are likely to remain renters for life if something doesn't change.

Advocates have been fighting for years upon years to influence how the housing market's government, arguing that policy changes are the only way to level the playing field, even just a bit.

The sad fact of the matter is that incomes haven't been rising as fast as home prices in cities such as Vancouver and Toronto for decades. Without a far higher-than-average income and significant help from their parents, most people under 40 in Toronto are screwed if they want to own a detached house here any time soon.

Even condos are growing increasingly out of reach for most of the city's youth.

So we leave town or we rent while people who purchased houses back in the 1970s (or, in some cases, 2005) become multi-millionaires in their sleep.

Compounding the matter are high rates of foreign ownership and the proliferation of "investment properties," which help keep inventory levels so low that bidding wars and sale prices far over asking are now the norm in major urban centres.

➡ Fact: economic inequality is on the rise and while some profit off of a lack of affordable housing, millions of young Canadians are paying the price. With the price of homes rising 25% last year alone, the deck is stacked against them.

None of this feels fair because it's not, and it sucks, but millennials can at least take some solace in the fact there are organizations out there working hard for a new generation of homeowners to emerge without selling all of their non-vital organs (though it's hard to say if a kidney would even cover half a down payment these days.)

Generation Squeeze, a youth-powered think tank based in Vancouver, put forth some interesting ideas this week in a new report called Breaking Canada's addiction to high and rising home prices: a price on housing inequity.

"When it comes to housing in Canada, the status-quo has created inequality and complacency. Inequality, because rising housing prices lead to wealth windfalls for some while eroding affordability for others, which limits their chances to live up to their potential and enjoy life," reads the report, authored by UBC professor Paul Kershaw.

"Complacency, because some homeowners reap wealth windfalls from skyrocketing prices without recognizing that their gains help to keep many others on the outside looking in."

Kershaw proposes a "creative disruption to the status quo" in the form of properly treating housing as a place to live, not simply a way to make money.

"Currently, our tax system shelters from taxation the $3.2 trillion in added housing wealth homeowners have gained since 1977. It therefore incentivizes people to prioritize housing as a way to get rich, rather than a place to call home," he writes.

"Just like offshore tax shelters motivate moving money out of Canada to preserve assets, the home ownership tax shelter motivates us to bank on rising home prices to gain wealth... A system that turns home ownership into an investment strategy is crushing affordability and harming younger and future generations. It’s time to protect real shelters, not tax shelters." 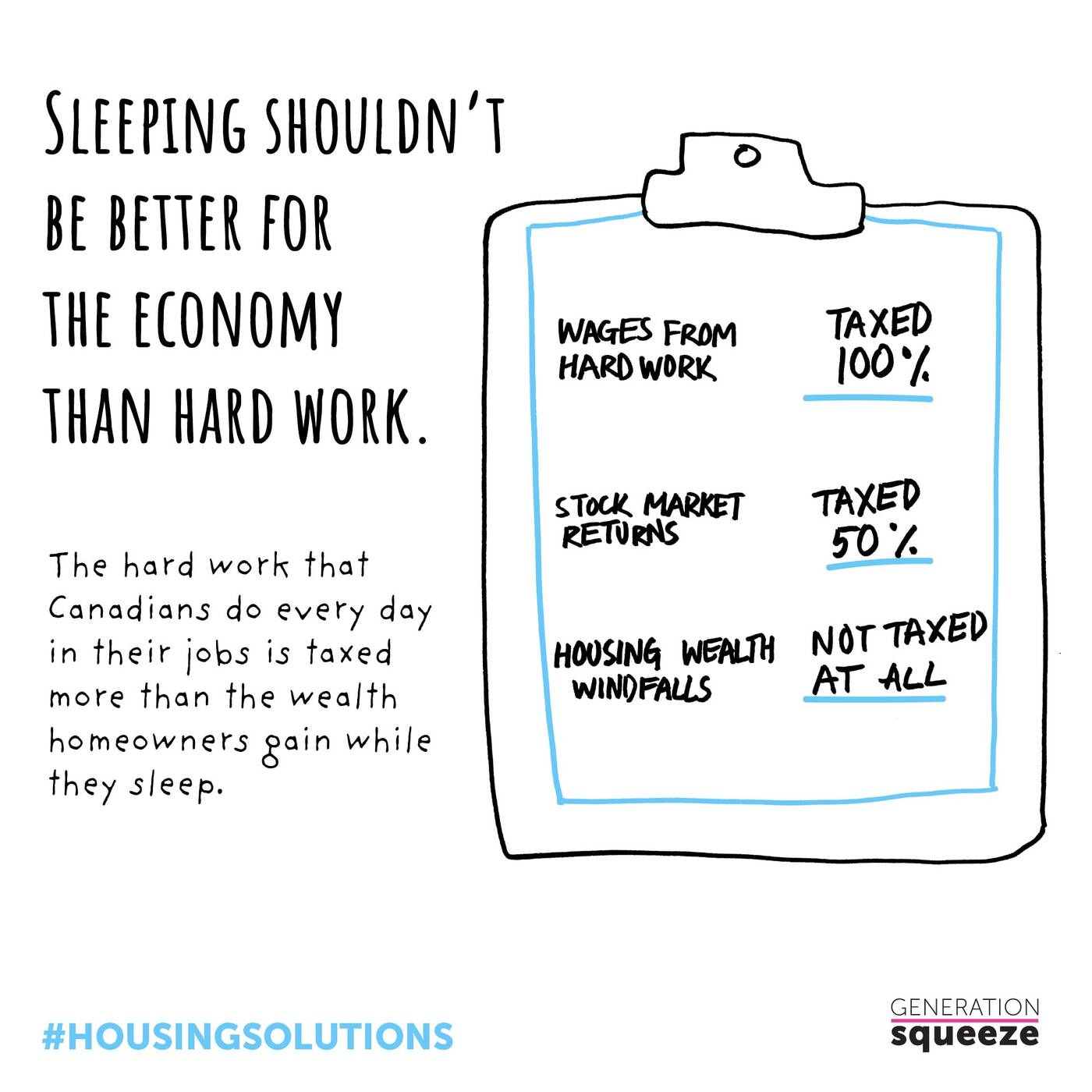 Preach, mister! But how (/can?) we as a society bring a system like this to reality?

Generation Squeeze says that Canada can start down the right path by putting adding a "modest" surtax of between 0.2 per cent and one per cent on homes with seven-figure values to slow down home prices a bit while earnings catch up.

"An additional $400-$1,000 each year is a small price to pay to help slow runaway home prices so that the earnings of young people, seniors who rent, and newcomers can reconnect. It's also a modest figure when considered relative to taxes on wages."

You can read the entire report and all of its recommendations, along with plenty of insight here, but the main takeaway seems to be that putting even a small surtax on the most expensive properties (and property owners) in Canada could literally help hundreds of thousands of people live better, more secure lives.

Says Kershaw: "It's time to ask the 10 per cent owning Canada's highest value real estate to tolerate a small price on housing inequity in order to demonstrate allegiance to the Canadian dream that a good home should be in reach for what hard work can earn, whether in rental or co-op housing, or as owners."