The Bank of Mom and Dad is funnelling ever more cash into Canada's hot-hot-housing market, a new report shows, as home prices skyrocket and young adults struggle to afford down payments on their own.

While far from a new phenomenon (baby boomer parents have been known to at least partially bankroll their millennial kids), the share of first-time home buyers recieving financial help from family members is growing, up from 20 per cent in 2015 to nearly 30 per cent in 2021.

The total amount of money new buyers are recieving from their folks is also growing, according to CIBC Economics, both at the individual level and on the whole, across Canada and especially in Toronto and Vancouver.

"No less than two-thirds of first-time buyers that received a gift indicated that the gift was the primary source of their down payment," reads a CIBC report released Monday with the title "Gifting for a down payment — perspective."

"Overall we estimate that over the past year, gifting amounted to just over $10 billion, accounting for 10 per cent of total down payments in the market as a whole during that period."

Ten per cent! Ten per cent of all home down payment funds in Canada! Came from the parents of buyers! This might suggest, as many believe, that the practice has become commonplace among young real estate seekers. How else could they afford anything in this market? 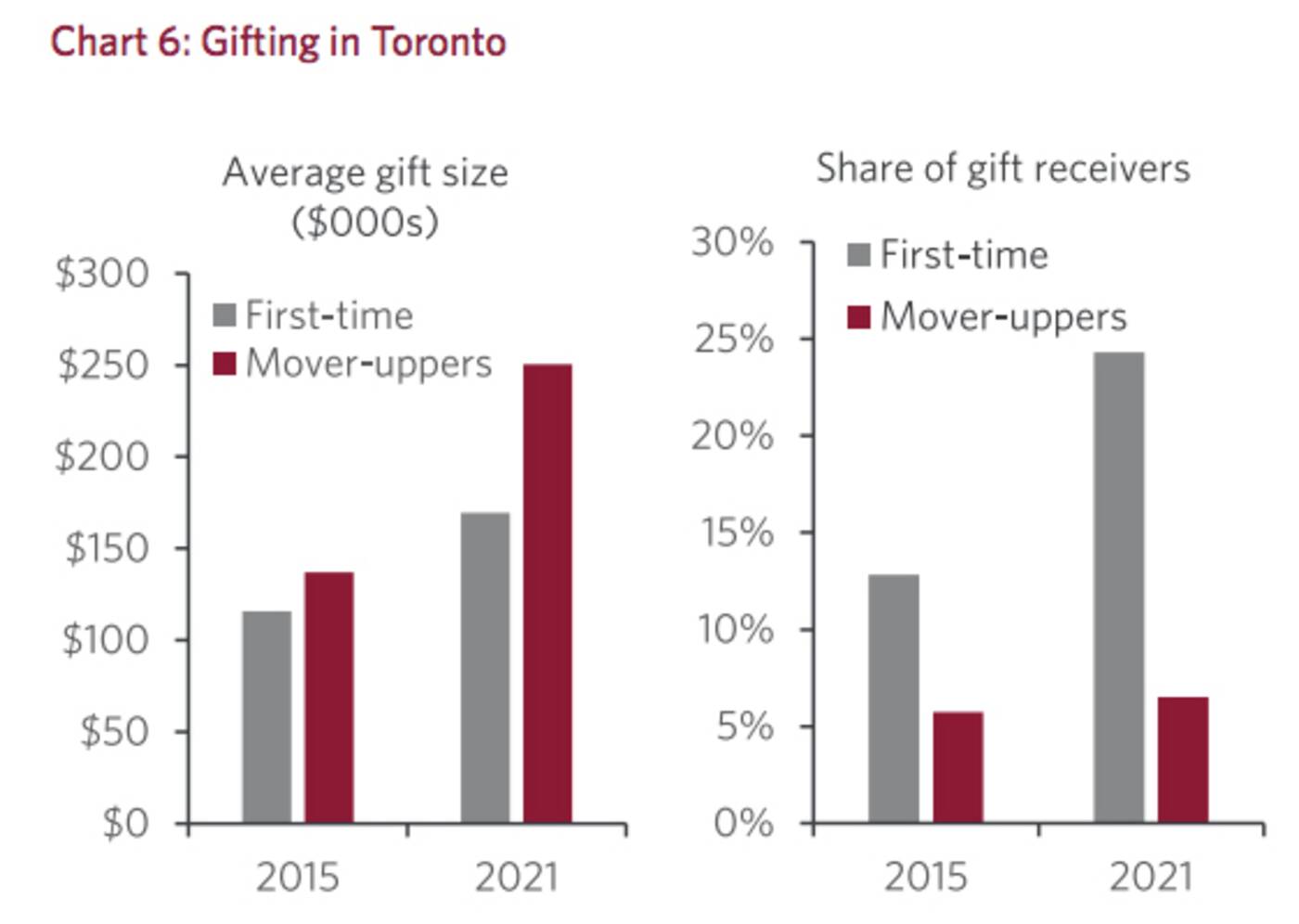 Both first-time home buyers and owners upgrading to larger spaces recieve funds from family, but the former seems to do it more often — likely because they have to. Image via CIBC.

As for how big a gift people are getting on average from their benevolent makers, it varies by market.

Canada-wide, the average size of a monetary "gift" for a home down payment was just over $52,000. CIBC reports that is has "risen steadily since then" to reach a new record high of $82,000 during the pandemic.

"The most expensive provinces naturally see the largest share of gifting. The average gift in Toronto during the first three quarters of 2021 is now estimated at more than $130,000 for first-time buyers while mover-uppers enjoyed a gift of almost $200,000," reads the report, authored by Benjamin Tal, Deputy Chief Economist of CIBC World Markets Inc.

The bank notes that the majority of parents are using their savings to help fund these gifts for their adult children, as opposed to going into debt, and that the average size of a gift is highly correlated with home prices at any given time. 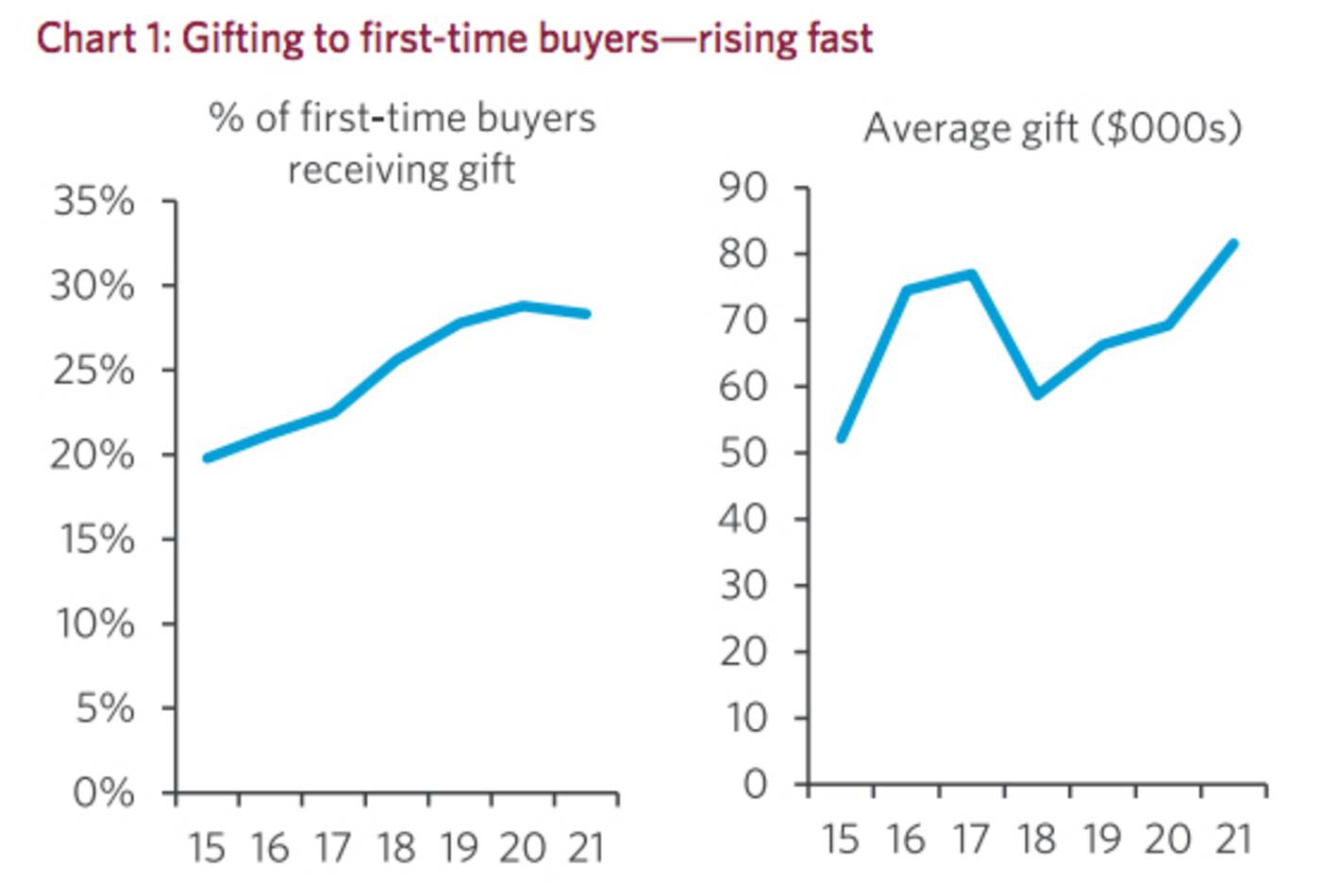 An increasing portion of all first-time home buyers in Canada are recieving financial help from their parents, and in higher and higher dollar values. Image via CIBC.

"Over the past half a decade, growth in the average size of gift outpaced home price inflation, averaging 9.7 per cent per year — a full two percentage points faster than growth in home price," writes Tal.

"Given the trend and the size of gifting, it is clear that this phenomenon is becoming an important factor impacting housing demand and therefore home prices in Canada."

The implications of this phenomenon include widening the wealth gap between receivers and non-receivers of gifts from their parents; and it's not only the money a child gets for a down payment today that will give them a leg up over their peers.

"That increase in the gap is much larger than the actual gift size as it might make the difference between owning and not owning a house, with receivers potentially benefiting from future home price appreciation," explains Tal.

"Furthermore, gifting also works to reduce the size of the mortgage and therefore leads to significant savings on interest payments over time."

Combined with other popular boomer-to-millennial gifts such as tuition, rent, cars, weddings and living expenses, young people with parents who can (and will) lend them financial support have definitely been given an advantage this world — one that could help some overcome the distinct economic disadvantages bestowed upon our generation by theirs.