Imagine a Toronto where the incomes of regular people rose as fast as housing prices? Where young couples weren't forced to sink most of their money into a landlord's boat payments? And newcomers could actually live within an hour's bus ride of where they work?

In a country where renters didn't inadverdently launder cash for rich tax evaders from other countries?

That would be nice, but the captains of industry must maintain their exorbitant bonuses somehow. I mean, what's a capitalist society without an unsustainable wealth gap?

I'm certain we'll all find out eventually... but for now, the vast majority of Torontonians who weren't born into old money (or didn't buy property more than two decades ago) can either somehow significantly boost their incomes, continue renting forever, or leave the city.

This is our generation's lot — and it's getting worse all the time.

The National Bank of Canada's latest Housing Affordability monitor, released Tuesday morning, shows that someone would need an annual household income of nearly $200,000 to afford an average detached house in Toronto.

Ominously titled "Housing affordability worsens by the most in 27 years in Q2 2021," the report states that conditions deteriorated in all ten markets surveyed during the second quarter of 2021, with Toronto posting the highest drop in affordability.

On a quarter-by-quarter basis, both condo and house prices rose in Toronto (by 5 per cent and 7.1 per cent, respectively,) while prices for all types of dwellings jumped a whopping 16 per cent over the same time last year.

"On an annual basis, home prices in the city shot up 16 per cent, also surpassing the index's mean increase of 14.8%," notes the bank. "A slight 0.9 per cent rise in the median household income failed to offset the effect of these higher prices, while rising interest rates contributed to the deterioration."

That's right — median household incomes have risen less than one percentage point over the past year. Monthly mortgage payments, meanwhile, now amount for a staggering 61.3 per cent of the median pre-tax household income in Toronto.

This is far higher than the composite average (44.8 per cent), and represents more than double the what the Canada Mortgage Housing Corporation currently classifies as "affordable" (less than 30 per cent of a household's pre-tax income). 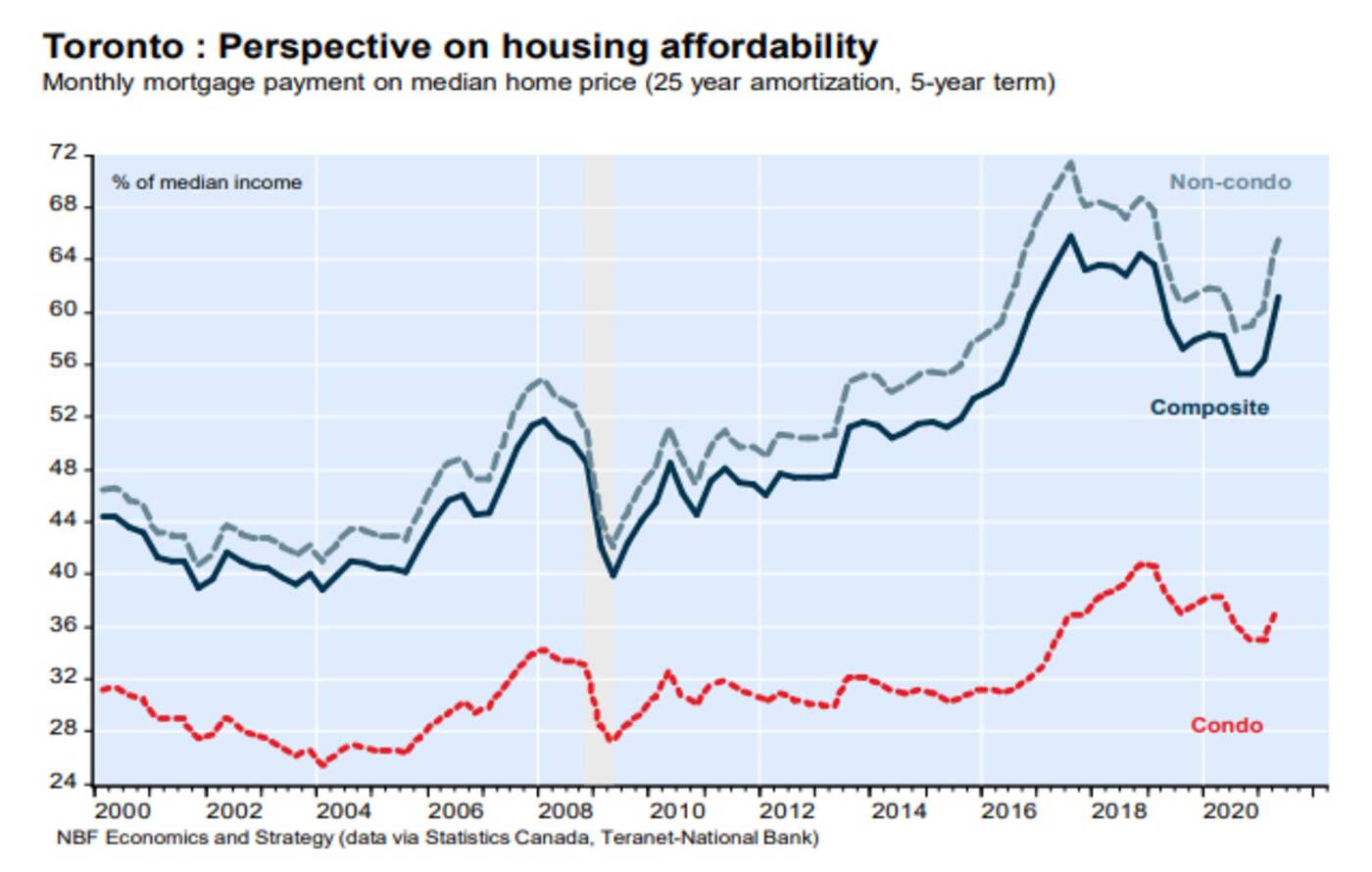 The percentage of one's household income needed to purchase a detached house in Toronto has seen a sharp upturn over the past year. Image via National Bank of Canada.

The National Bank of Canada calculated a "representative home price" (non-condo) of $1,146,667 for the metropolitan Toronto market over the second quarter of 2021.

Based on this figure, one (or more likely two) would need an annual income of about $196,913 to afford a house. They'd also need to save up for 318 months (at 10 per cent of this income level) to come up with a downpayent.

For condos, the situation is slightly better with a representative average price of $653,308 across April, May and June. To buy a condo at this price, someone would need an annual household income of about $131,387.

The downpayment saving time for a condo at this price would also be significantly less at 56 months (about four and a half years).

Long story short, people looking to buy homes that aren't condos in Toronto need to be increasingly monied to make that happen. Small downtown units may be increasing in supply, but so too is demand — and houses? With backyards? Get out of here. No, literally. You need to get the heck out of here.