At what point does one give up on the dream of ever owning a home in the city of their choosing?

This one, right now, for a sizeable portion of people who don't already own homes in Toronto, according to the results of a new poll released by the Ontario Real Estate Association (OREA) on Tuesday.

Created by Abacus Data on behalf of the OREA, the association's new Housing Affordability in Ontario: Perceptions, Impacts, And Solutions report found that 46 per cent of all prospective home buyers in this province under the age of 45 "have considered or are considering moving out of the province to afford a home."

More than half of that same group of 2,000 panelists — 56 per cent — indicated that they are "pessimistic about the possibility of buying a home in the community they want to live in," while 68 per cent agreed that the Ontario government isn't doing enough to make housing more affordable for those who live here. 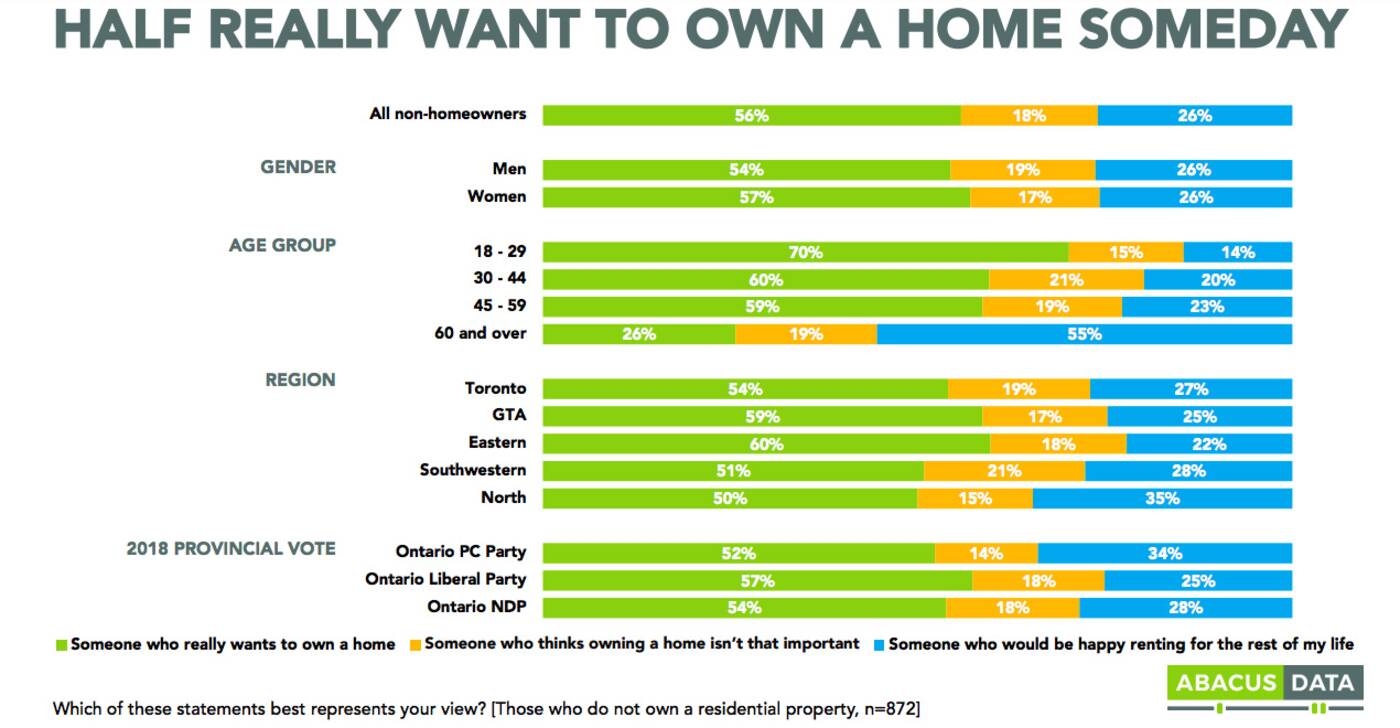 "The affordability crisis continues to crush the dream of home ownership for many Ontarians and this has been intensified by the economic impact of the pandemic," said OREA CEO (and former Ontario PC Party leader) Tim Hudak when sharing the poll's results this week.

"Governments need to act if we want to create future generations of homeowners, and that starts with pro-growth policies that could bring affordability closer to first-time home buyers and address the supply shortage."

While none of this is entirely surprising, the new data points provided by OREA are quite interesting, especially when broken down by location and demographic.

In Toronto, some 42 per cent of respondents said that they would consider moving to a smaller community outside the GTA in order to afford a detached home. 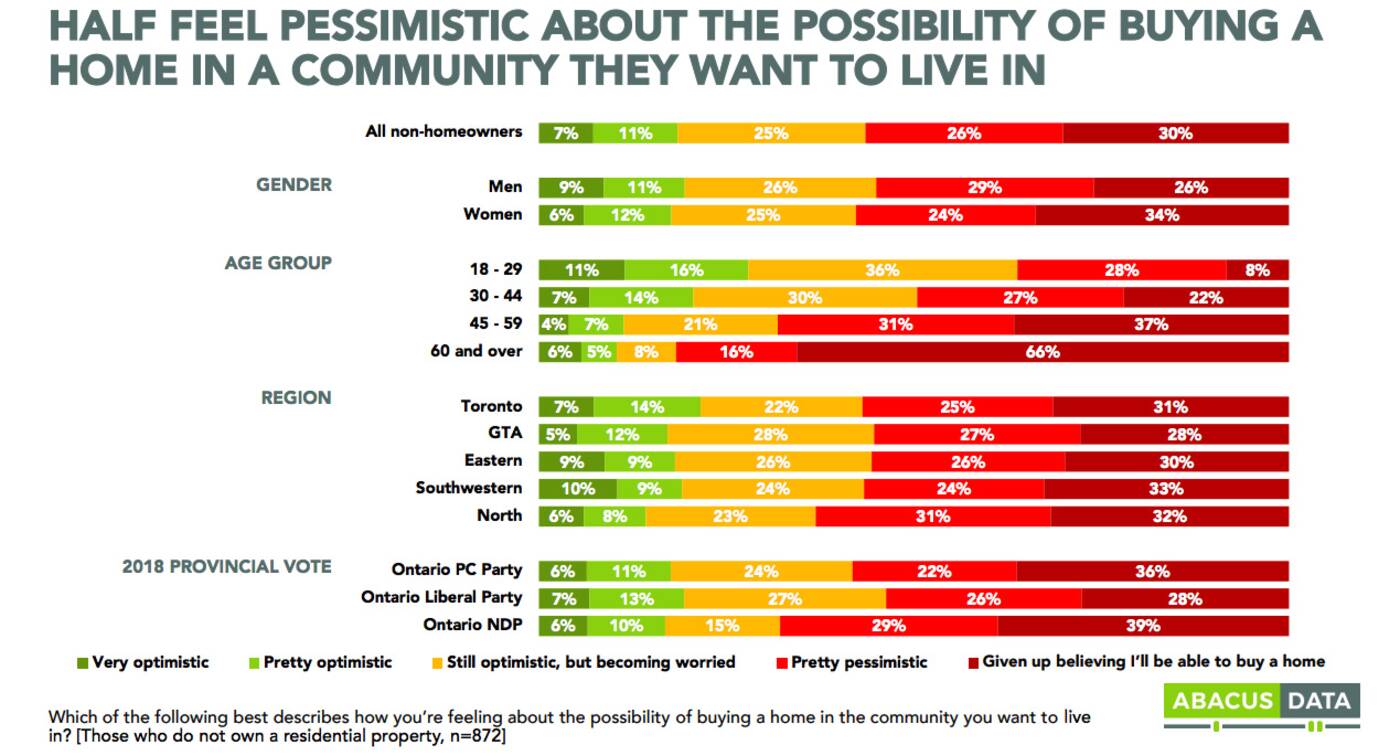 The percentage of locals willing to leave Ontario completely, however, is slightly lower: Six per cent of Torontonians said they were "definitely" considering it, while another nine per cent said it was "likely" that they would.

With house prices skyrocketing, they may not have a choice if home ownership is truly what they want —and according to the Abacus data, some 69 per cent of people in Toronto who don't already own a house want to.

Ontario-wide, the number is actually lower at 65 per cent who answered "yes" to the question: "Do you want to own a residential property like a house, townhouse, or condo someday?"

People between the ages of 18 and 29 were the most optimistic, with some 80 per cent of all respondents in that category indicating that they want to "own residential property someday." 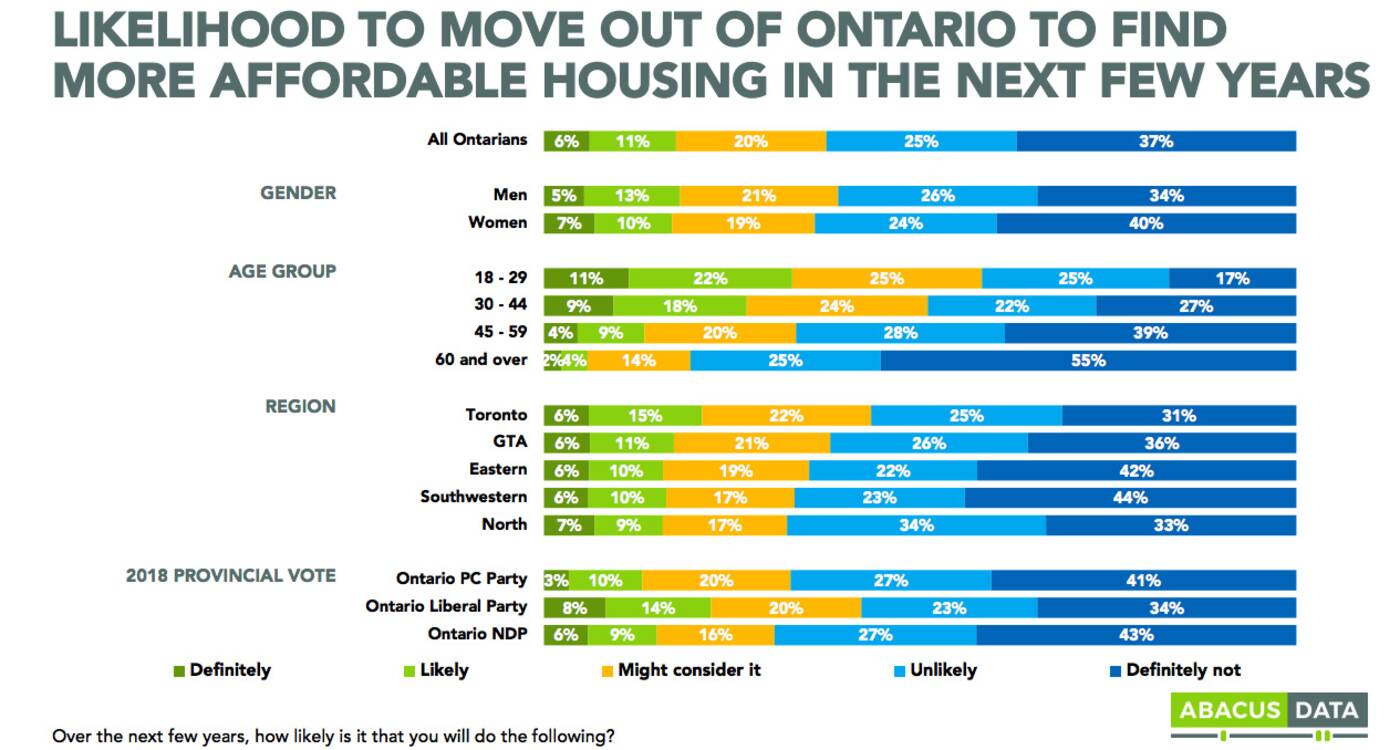 One of the more interesting findings from the perspective of a downtown millennial renter is how many non-homeowners in Toronto are content to just keep on renting forever.

Approximately 27 per cent of the Toronto respondents indicated that they "would be happy renting for the rest of my life," while another 19 per cent ticked off the box that means they think "owning a home isn't that important."

The report doesn't break down how much overlap there is between the 54 per cent of Torontonians who say they "really want to own a home someday" and those who are willing to leave the city and/or province to make it happen.

What the survey does suggest is that Ontarians on the whole want governments to take concrete measures to help solve the province's affordability crisis.

NEW RESEARCH shows that almost half of Ontarians under 45 are looking to move to another province in search of more affordable homes. This is bad news for the future prosperity of our Province. Find out what the government can do to help at https://t.co/wAOIInxvGX @abacusdataca pic.twitter.com/9qhDDc2uW7

According to the OREA, a staggering 91 per cent of respondents support the idea of "stopping money laundering in the Ontario real estate market with a publicly searchable registry of who owns the properties."

"The lack of housing supply is leading many to look outside the province for their first homes and that will make it difficult to retain and attract talent in Ontario in the near future," said Hudak when releasing the findings commissioned by his association.

"The Government of Ontario's More Homes, More Choice Act is an excellent first step but if we want to reverse this brain drain, municipalities also need to deliver by opening up more housing opportunities."