The plight of young adults who want to buy houses in Toronto continues to capture the attention of analysts nationwide as housing affordability deteriorates even further into the crisis zone, but is yet another report on how millennials can't afford property what we need?

Not exactly, no, but it should be somewhat comforting to those in this demographic to know that they're not alone in failing to plunk down more than $300,000 for a downpayment on an average detached home.

In some parts of Canada, you can buy an entire house for what it costs just to secure the right to keep paying off a mortgage in Toronto for the rest of your life.

A new study from the Canadian fintech firm Borrowell found that Toronto in fact has the lowest home ownership rate among people in their 30s than any other major Canadian city. Only 25 per cent of what analysts have deemed "older millennials" — those aged 30 to 39 — have a mortgage at this time in T.O.

Edmonton and Calgary, on the other hand, both have older millennial home ownership rates of 39 per cent. It's of note that the average prices of homes in these Alberta cities are $398,229 and $458,300, respectively. 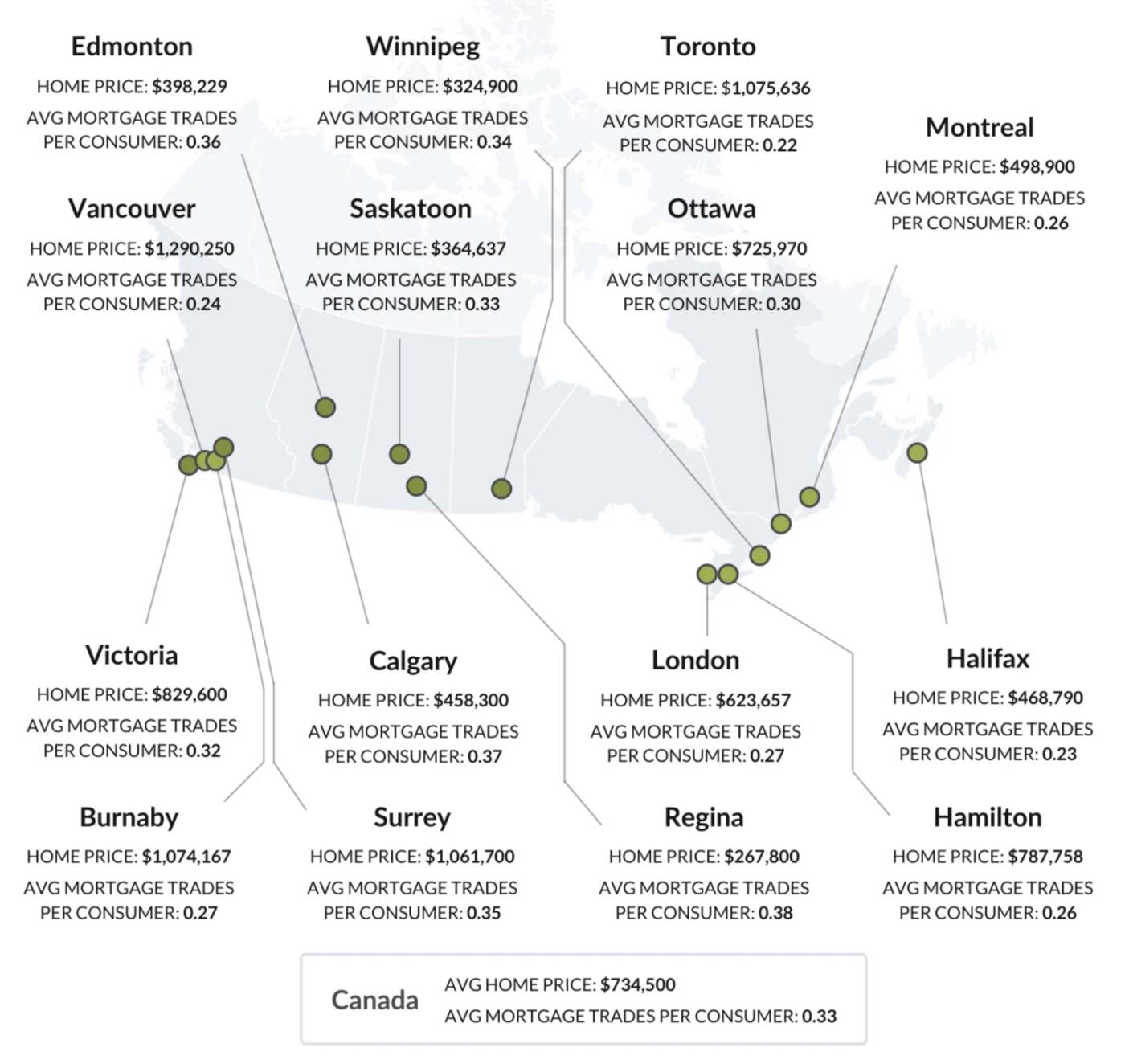 Toronto has fewer mortgages per consumer than any other city in Canada across all age groups. Image via Borrowell.

To highlight discrepancies in home ownership across age group and geographic location, Borrowell ranked 15 major cities in Canada based on over 713,000 credit reports from consumers with a credit score of 600+.

Toronto took the top spot for lowest rate of home ownership among 30-somethings, as previously mentioned, but actually came in third when looking only at people aged 20 to 29. Home ownership rates for this "younger millennial" demo are actually lower in Hamilton and Vancouver than they are in Toronto, followed by Victoria and Montreal.

"High home prices in cities like Toronto and Vancouver and market conditions in certain cities may be preventing consumers from entering the housing market," notes Borrowell of its findings.

"Toronto, Vancouver, and Montreal have seen year-over-year housing price increases of 17 per cent, 14.5 per cent and 27.4 per cent respectively."

And these trends haven't been limited to large cities either; cities like Hamilton and Halifax are also seeing home prices skyrocket as people leave larger centres for more space at less cost. 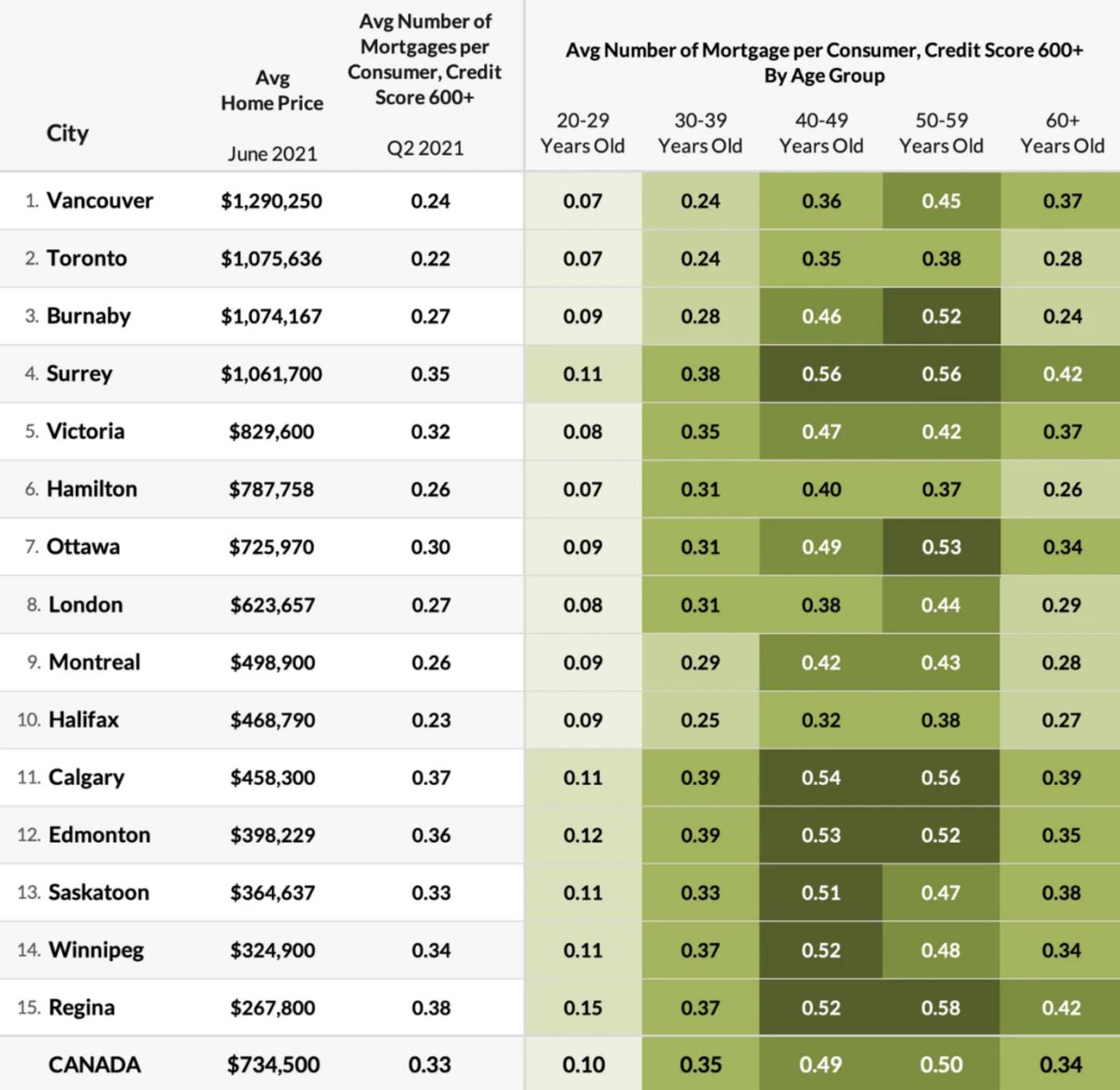 Toronto, Vancouver and Hamilton are all tied for the lowest rates of home ownership among people in their twenties. Image via Borrowell.

It wasn't always this way, as older people who bought massive downtown Victorians for less than six figures before we were born can attest. According to the Toronto Star, the average price for a house in 1971 was only $30,426 — the equivalent of just over $200,000 in modern day Canada.

You can't even get a studio apartment for double that amount in 2021, let alone somewhere with enough space to live, work and potentially raise a family, which is where much of the millennial generation (adults aged 25-40) are at in their lives.

We can blame a lot of things for our inability to buy property, but narcissistic entitlement and love for avocado toast do not make the cut. Rather, dwindling housing supplies, stagnant incomes and a lack of government intervention have all contributed to the problem.

At its most obvious, however, the exponential, unsustainable growth of home prices is why few people under 40 can buy an actual house in Toronto (without some serious help from their parents.)

"You can see that Millennials in certain cities are facing bigger hurdles than ever before when it comes to purchasing a home, even if they have a good credit score."