Unless you're mad wealthy or you've somehow managed to avoid all local news content over the past decade, I don't need to tell you that living in Toronto is getting progressively more expensive.

It's been well-established that home ownership is clearly out of reach for the majority of people under 40, who were too young to enter the market before buyers needed a household income of nearly $200,000 just to qualify for an average mortgage, and that homelessness is on the rise.

Young people are leaving the city in droves to buy houses and start families in smaller towns (that, or resigning themselves to rent forever) and people who can't afford to pay rent at all are increasingly vulnerable as the pandemic dwindles on.

Analysts have been blaming a dire shortage of housing supply in large part for both of these problems, and for the meteoric rise of home prices across Canada in general.

While hastened by the pandemic, this affordability situation didn't manifest overnight. It did, however, get incrementally worse last quarter than anything recorded since the 1980s, and that's a pretty big deal.

A new report on Housing Trends and Affordability from RBC Economics warns that affordability is "on a sharply deteriorating track" in the Toronto area (as if it weren't already shredded to bits.) 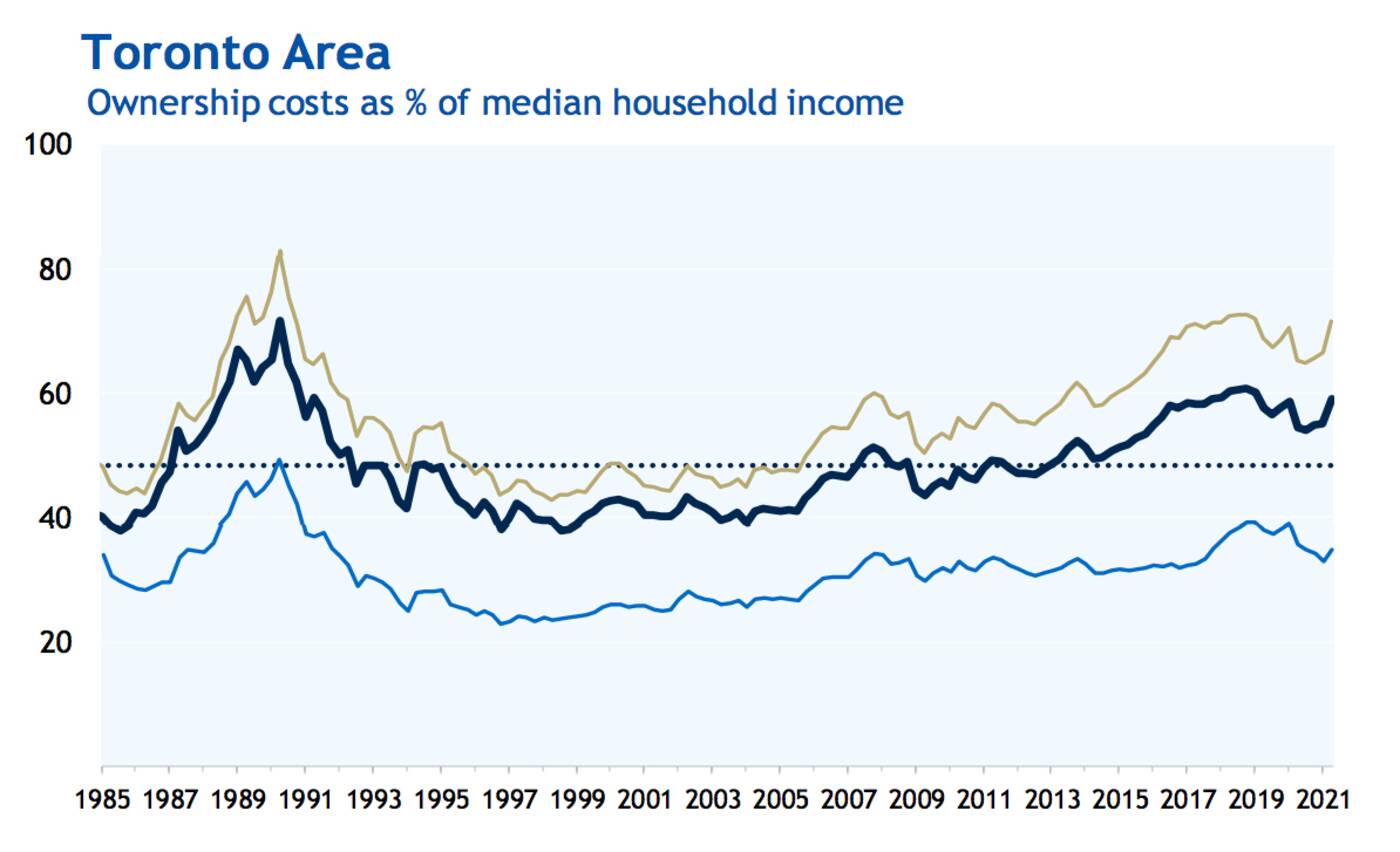 RBC ranks affordability based on how much of the median household income in any given city would be necessary in order to afford a house there. Image via RBC Economics.

As of Q2 of 2021, the bank is reporting that it now takes 59.1 per cent of an average household's entire income just to cover the cost of home ownership in Toronto. Make that home a detached house, and the figure shoots up to 71.6.

That's more than double what the Canada Mortgage Housing Corporation classifies as "affordable" (less than 30 per cent of a household's pre-tax income) in Canada.

"RBC's aggregate measure jumped a mind-boggling 4.1 percentage points to 59.1% in the second quarter—the biggest increase in almost three decades," reads the report as released on Thursday.

"With extremely tight demand-supply conditions continuing to fan a fire under property values, the measure is poised to climb further to levels not seen since the late-1980s. The situation is most strained for single-family homes where red-hot demand sustains intense upward pressure on prices."

The economists at RBC expect Toronto-area buyers to show increasing interest in the condo category, which is still relatively (though not technically) affordable with an aggregate affordability measure of 34.7.

And it's not only Toronto experiencing this wild ride, or even just Toronto and Vancouver. 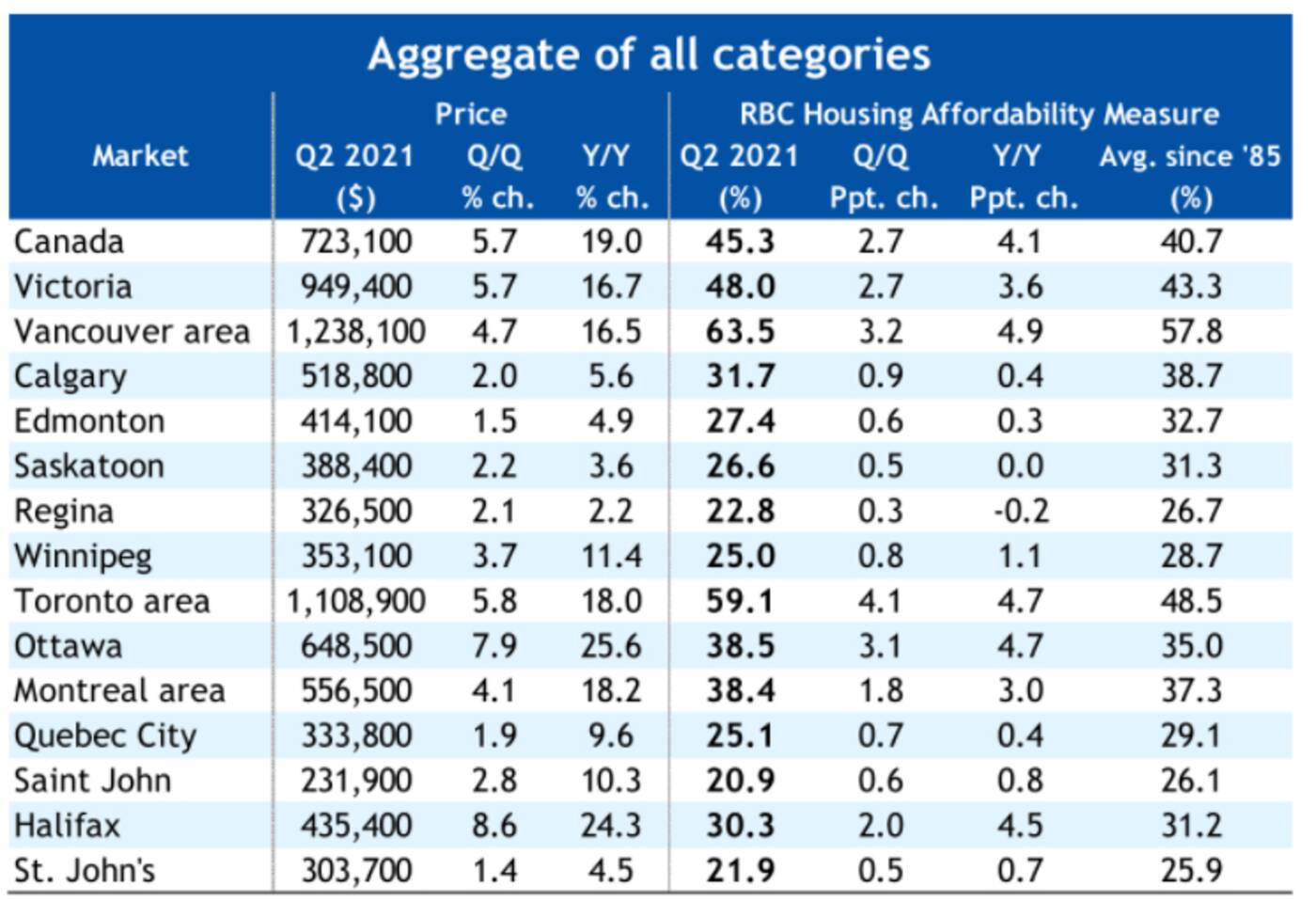 Toronto and Vancouver reign supreme for the portion of one's income that must be dedicated to home ownership costs, but Victoria, Ottawa and Montreal are coming up fast. Image via RBC Economics.

While Canada's twin beacons of unaffordability recorded the largest deterioration rates in the second quarter of 2021, RBC says that every major market and housing category across Canada got less affordable.

"Overall, affordability is most strained in Vancouver (ownership costs represent 63.5% of household income), Toronto (59.1%) and Victoria (48.0%)," reads the report, noting that Ottawa and Montreal also looked historically high with measures of 38.5 and 38.4, respectively.

But it's not all bad news: affordability may have eroded in all major markets (again, by the most in more than 30 years) but RBC says there are still parts of the Prairies and Atlantic Canada where home prices are historically low.

"We expect home prices to continue to rise in the near term, as demand-supply conditions generally remain exceptionally tight. This will further raise ownership costs across a wide spectrum of markets and housing categories," says Hogue.

"That said, the affordability deterioration is poised to moderate. The rate of price appreciation is now slowing in many places, and we project prices to flatten in 2022."