Toronto’s homeless population has suffered disproportionately during the pandemic, issues boiling over this summer when the City ruthlessly cracked down on the makeshift park encampments that have proven a popular alternative to shelters and respite centres.

These police eviction campaigns have been criticized since 2020 for their heavy-handed tactics and a perceived disregard for people already at their lowest points.

The outrage persists on Twitter, though news reports on the matter seem to have died down in the weeks since the last tense confrontation.

Many might be asking themselves where these displaced populations have gone.

Some have entered the City’s permanent shelters and 25 temporary Physical Distancing Shelter Sites. Many others feel unsafe in these facilities, instead choosing to set up in smaller, less visible encampments.

These micro-encampments are popping up in public spaces across the city, some highly visible like the patches of grass surrounded by looping highway exits, others obscured by urban infrastructure. Gone is the strength in numbers approach, replaced with small groups in concealed locations.

Thousands pass above one Downtown Toronto micro-encampment every day without realizing it, blind to the disheartening last resort for those below who have been evicted from the parks but do not feel safe in the shelter system. 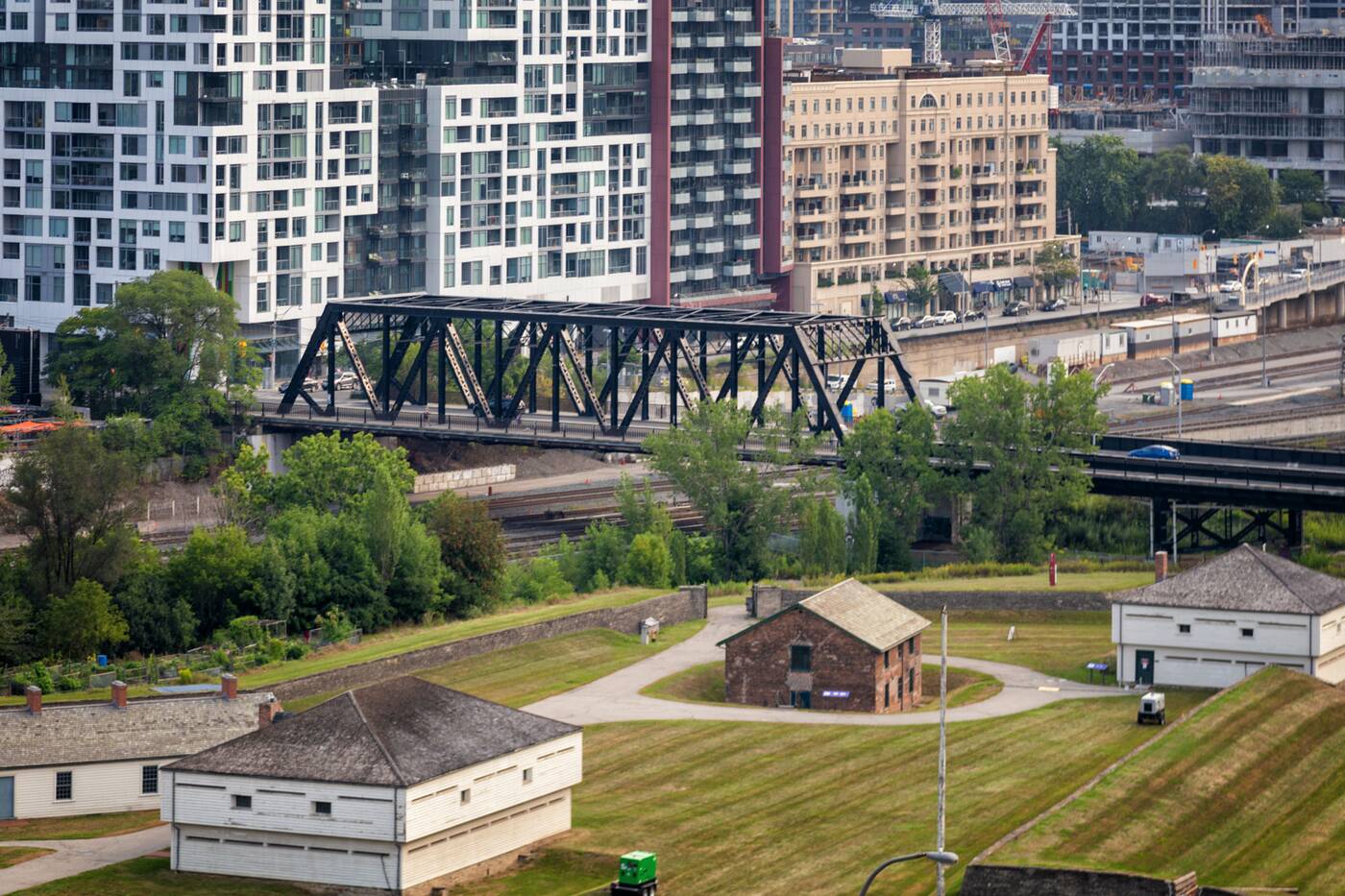 Looking northeast to the Bathurst Bridge, under which a micro-encampment community lives.

The Bathurst Bridge shelters a small unwavering community of holdouts who have led a nomadic lifestyle disrupted by evictions and rushed relocations. 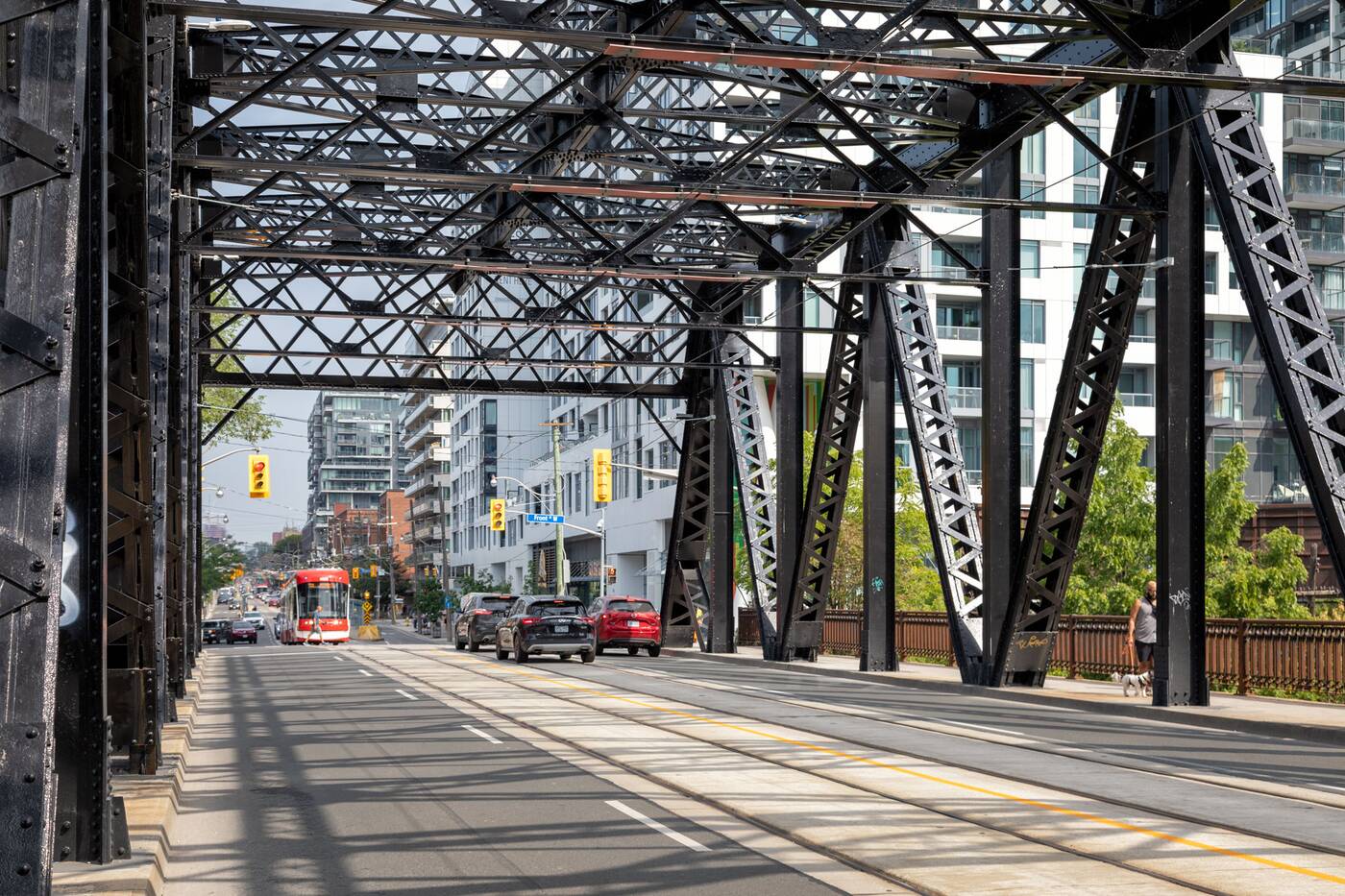 Facing north over the Bathurst Bridge.

Much smaller than the encampments that were cleared in Alexandra Park, Lamport Stadium and Trinity Bellwoods, the Bathurst Bridge encampment is home to no more than a dozen or two inhabitants.

An encampment of similar size was reported under the bridge in the early days of the pandemic, before being quietly cleared away by City services. Outrage was minimal compared to what we’d see the following year when the mass evictions began.

😳 Trying to find out what happened to the 15+ people at the Bathurst encampment. Suddenly shut down without notification. At least it wasn’t razed. V worried about people who were there + PRAYING they were not turfed out in one degree weather during a pandemic. #toronto #topoli pic.twitter.com/2DK5cU89pu

Two men residing in the re-built encampment who wish to remain unidentified showed blogTO of the conditions they face living under the bridge firsthand, generously offering a brief tour of the scene to an unannounced outsider. 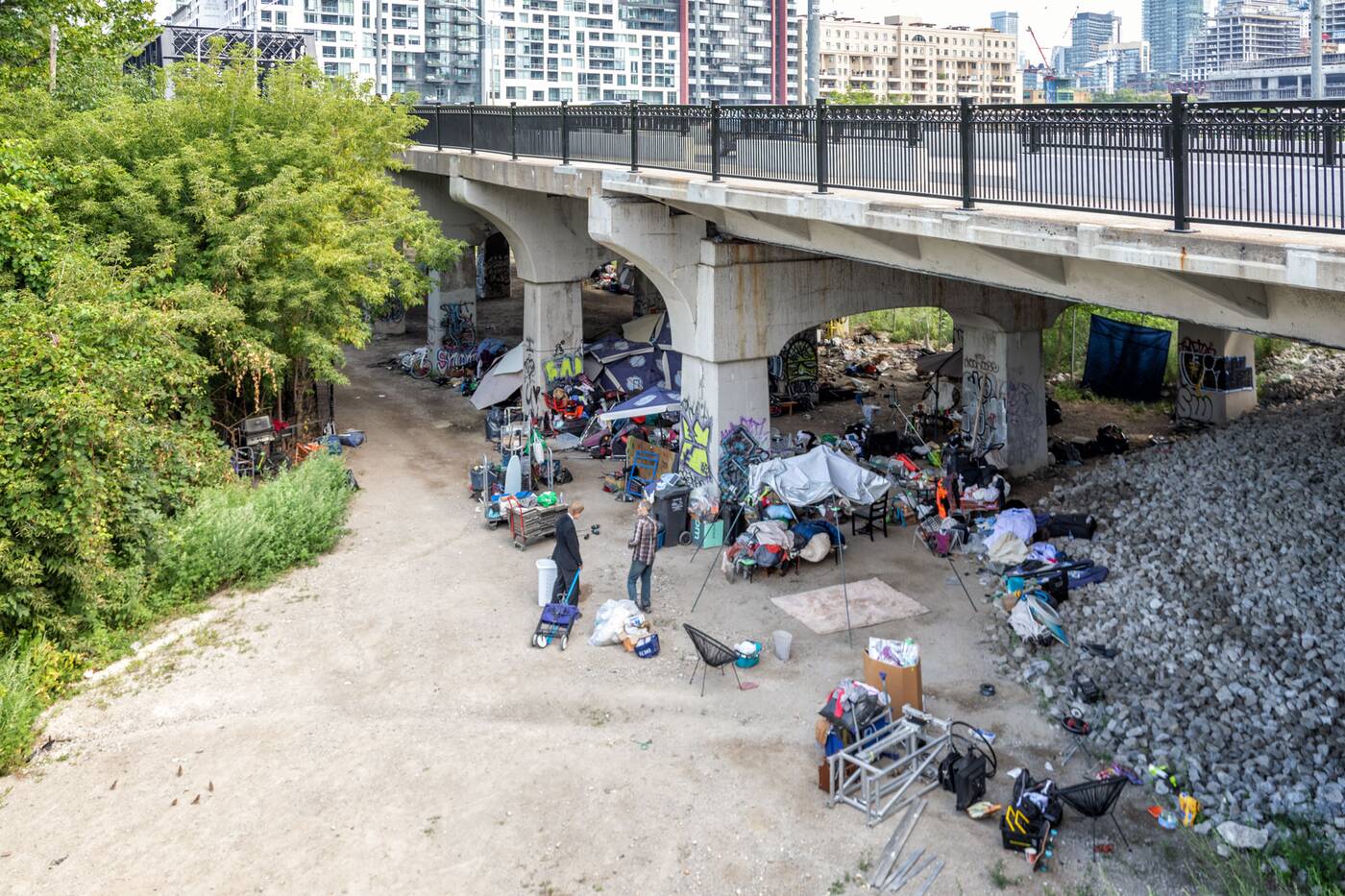 The encampment is below the bridge, hidden to most pedestrians above.

Neither wanted to be quoted, but both expressed grave concerns about shelters’ safety and living conditions. Surrounded by litter and baking in the oppressive heat, their shared description of the shelter system as "hell" spoke volumes.

They were the only two up and about at the time, as others took shelter behind a makeshift dome of patio umbrellas, including some that appear to have originated from Belgian Moon Brewery @ stackt Market, just north of the bridge. 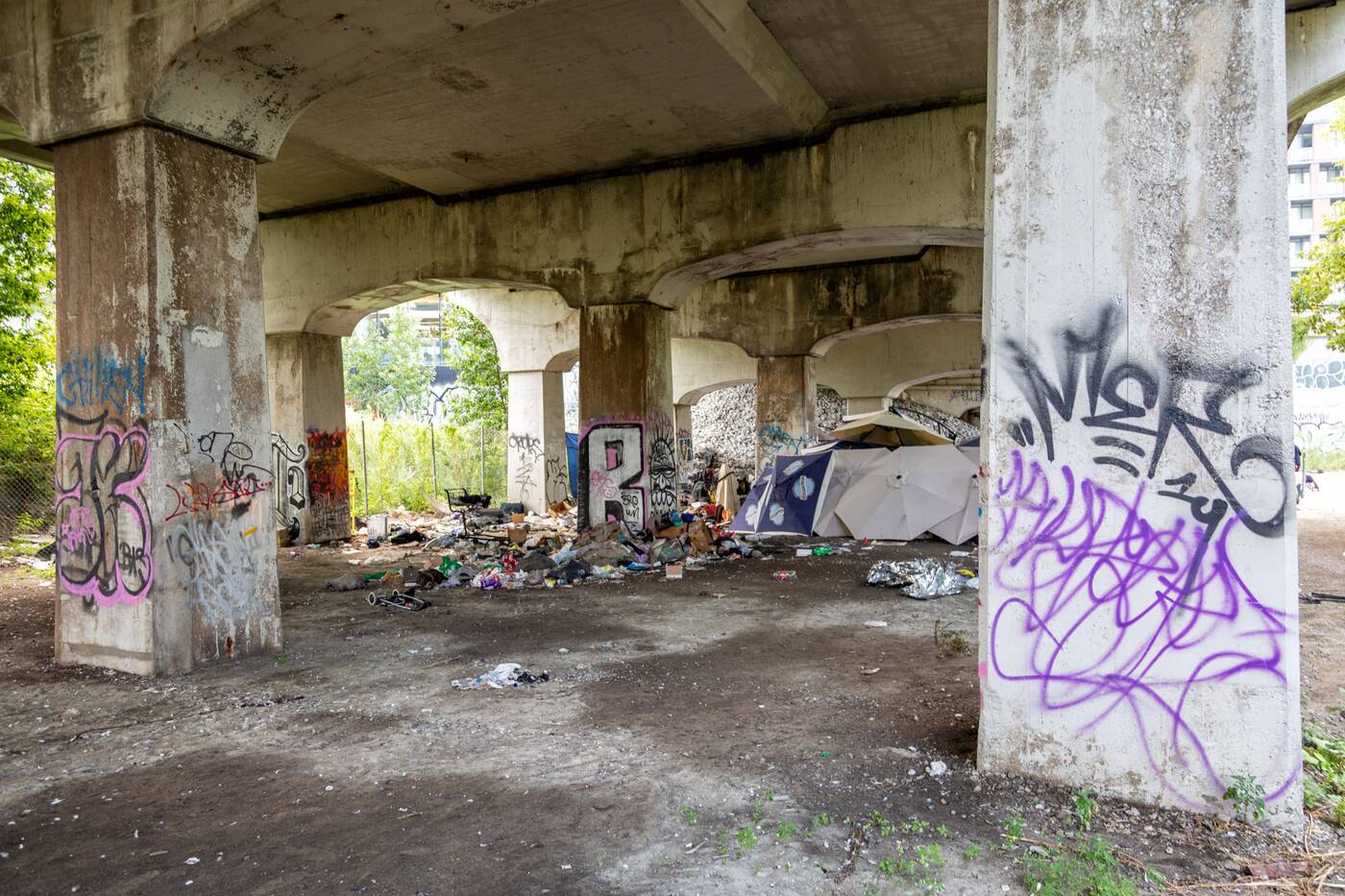 Litter and a makeshift dome of umbrellas are among the things found under the bridge.

Likely an act of desperation, this apparent repurposing of private property has proven to be a point of contention for some locals.

@cityoftoronto @JohnTory what are you going to about this mess under the Bathurst bridge. Stolen bikes, patio furniture, barbecues. Also covered with drug paraphernalia. pic.twitter.com/0OGJhZWeDw

Most of the encampment’s residents were at City Emergency Cooling Centres at the time, with a heat warning in effect and the temperature blistering even in the bridge’s shade. 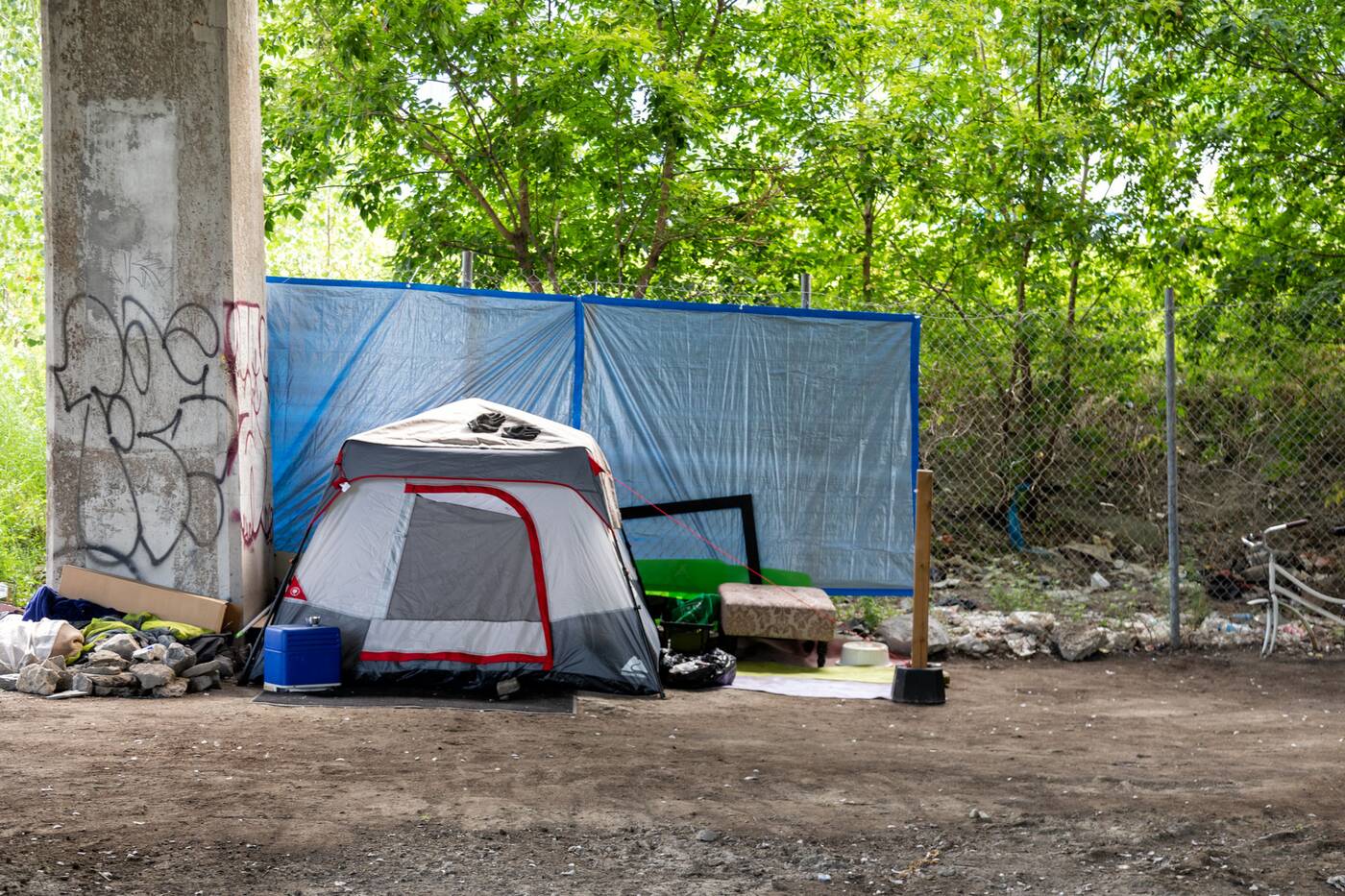 One encampment resident's personal living space next to a bridge support.

While less likely to generate complaints and force the City’s hand, this obscured location also puts people already at risk in even more potential danger. A place away from eyes is also usually difficult for ambulances or emergency workers to access or for passersby to notice a person in distress.

Alex Smirnis, Founder of City Street Outreach, is aware of the encampment and its residents' perceived need to keep out of the way and avoid detection, telling blogTO "it's a pretty private spot." 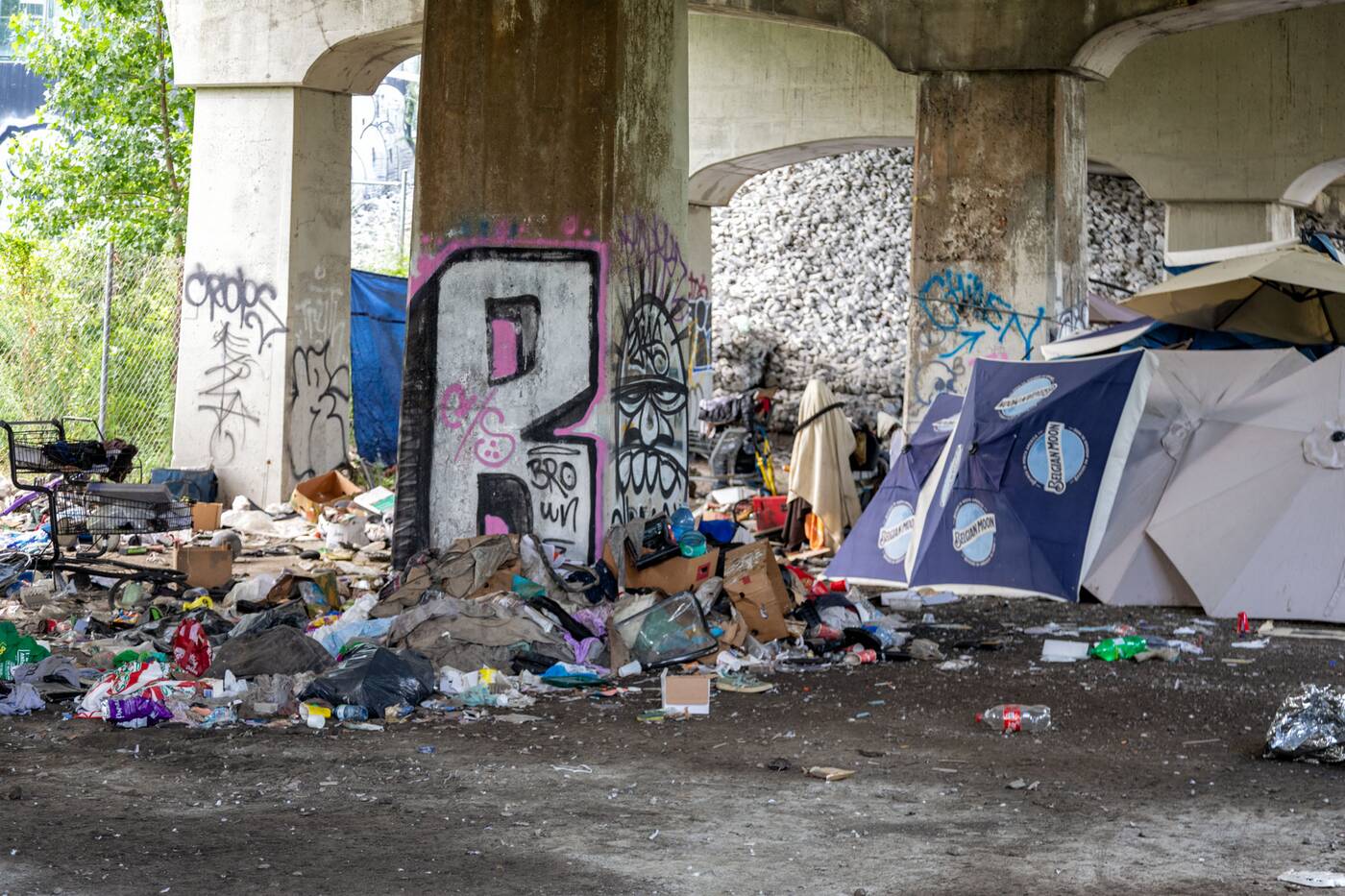 The chaotic scene that residents of this micro-encampment call home.

"I’ve always been of the opinion that if they're going to take down encampments, there need to be real housing solutions," says Smirnis.

"We are finding them in the most precarious places, where it's hard to keep them safe and away from harm, and in places where services can't reach them in an emergency. Our hearts break when we hear that these communities are having to set up in these secretive locations.”

Naturally, some see the situation as a product of the City’s failure to meet the urgent need for affordable and supportive housing.

The re-emergence of smaller, clandestine encampments should serve as proof that problems like this can’t be swept under a bridge. They can’t be shrugged off with constitutional excuses. They require action from all levels of government and a bit more compassion from the rest of us.