As the trend of working remotely entrenches itself as the new norm among office workers, more and more young urbanites have been fiddling around with the idea of moving away from Toronto — because why would you pay to live somewhere so dang expensive if you don't have to?

Jobs that previously required a schlep into the downtown core every day can now be done from anywhere — like in a city where detached house prices don't average $1.75 million, perhaps.

It's not necessarily that we want to leave the city, but many millennials are reaching a point where it's time to decide on whether to remain a renter for life or move somewhere else and buy a home.

The former is increasingly difficult to do as prices rise for all home types across the city: To wit, a tiny bachelor condo in downtown Toronto currently costs the same as a brand new 4-bedroom house in Sarnia. For the same price as a 573-square-foot condo in Scarborough, you could buy a large house with an inground pool in London.

I could (and would love to) compare prices between Toronto and other Ontario locales all day, but you get the point: Money goes way, way further in real estate markets outside the big city. 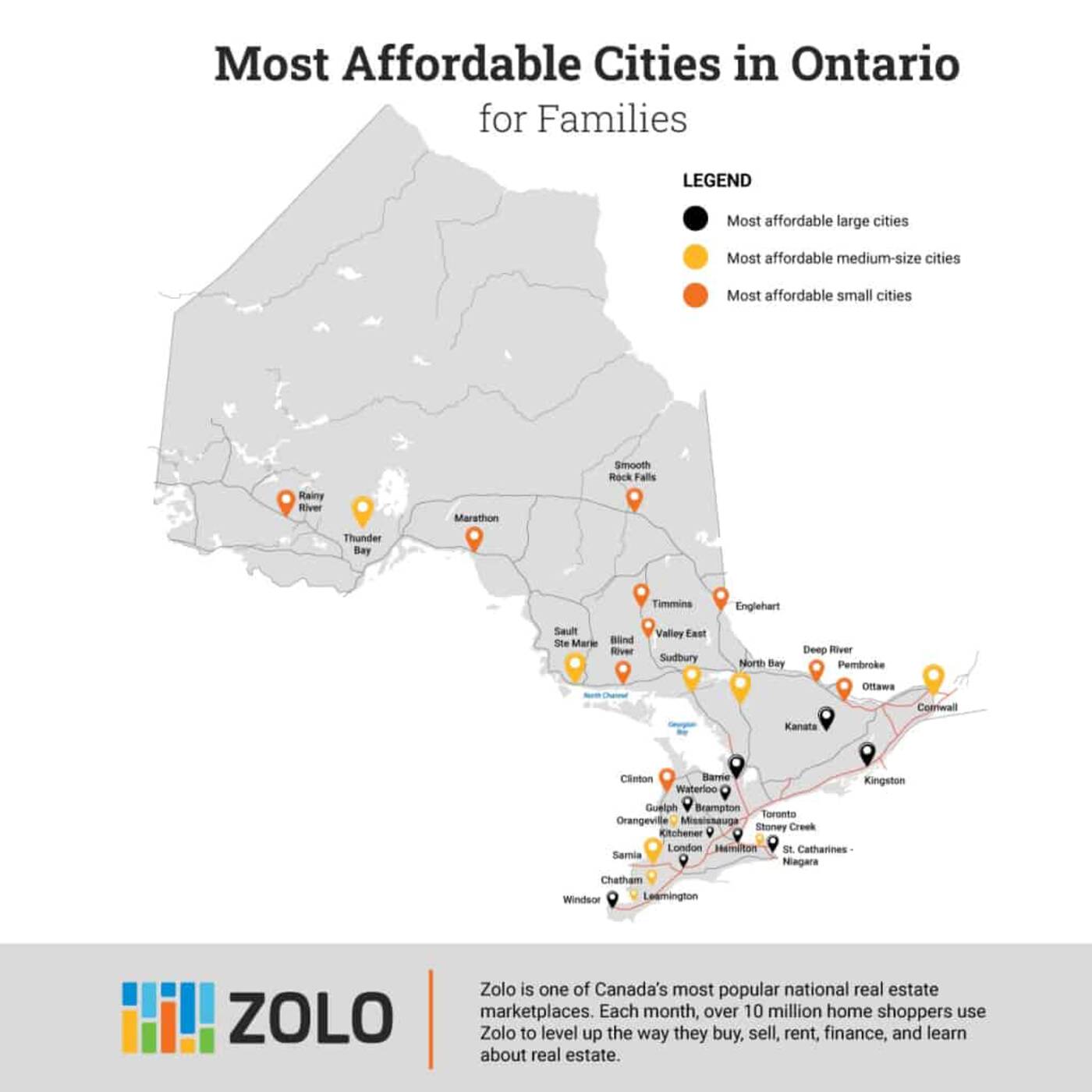 The large cities with Ontario's most affordable homes are identical for families and single-income earners. Graphic via Zolo.ca.

But where does it go furthest?

Canadian real estate marketplace Zolo recently crunched economic and housing data from 200 small, large and medium-sized cities across the province to figure out which is the most affordable to buy a home.

Windsor came out on top across the board for large cities, proving the least-expensive for single earners and families alike, followed by London, Barrie, Kanata and Guelph.

"Windsor is so close to Detroit that countless Windsor residents commute there to work every day. The average price of a home in Windsor is $303,183, making it one of the most affordable cities in Ontario for families," writes Zolo of the southern border city.

"Windsor is home to The University of Windsor, ranked as one of the best universities in the nation. Windsor is a family-friendly and affordable place that offers plenty of festivals, museums, and gardens, and don't forget about the gorgeous waterfront view." 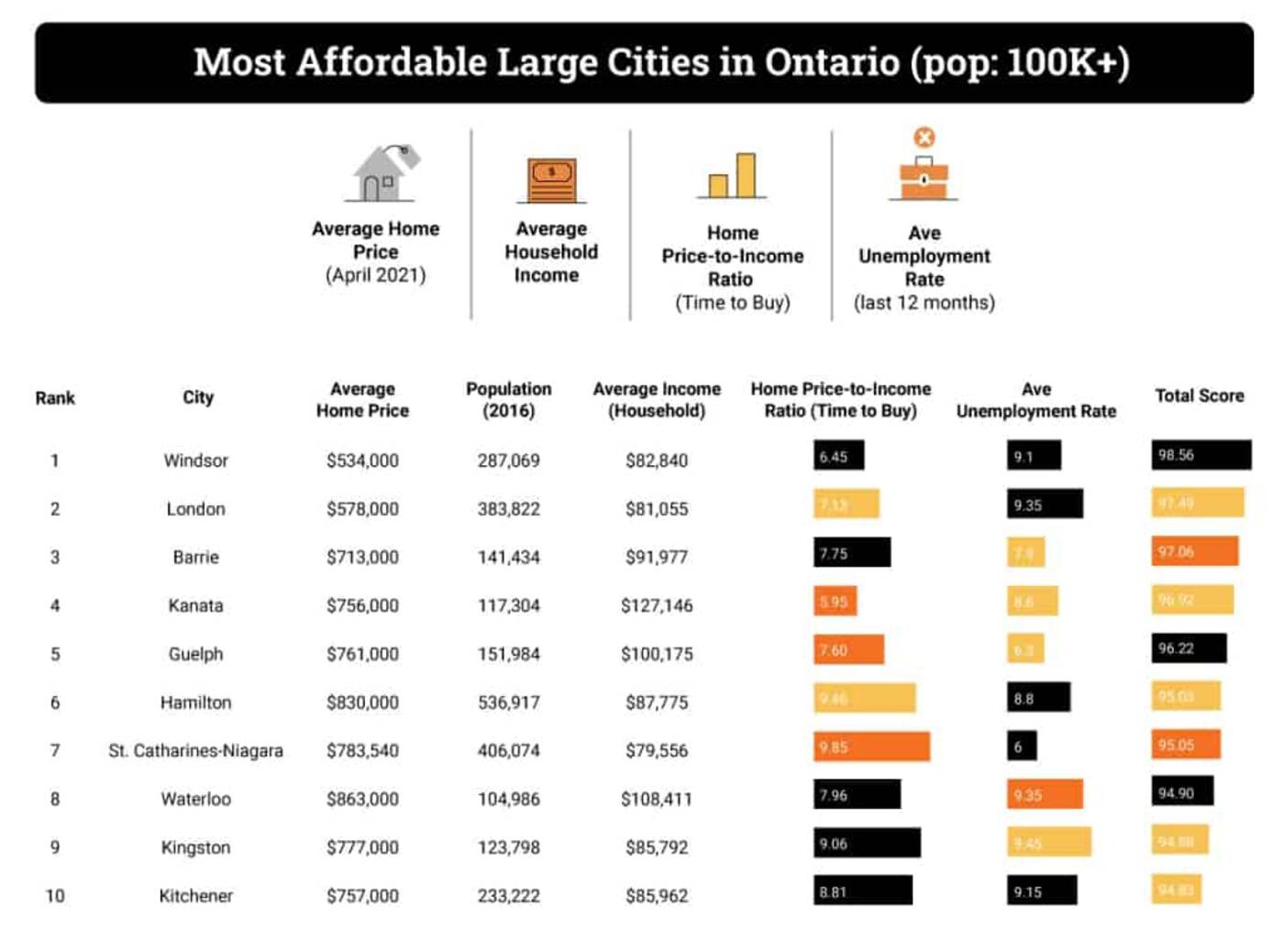 Ontario's most-affordable larger cities as of April 2021, based on calculations by Zolo. Graphic via Zolo.ca.

In terms of cities considered "medium-sized," Sarnia took the top spot for affordability, while Deep River was found to be the most affordable among Ontario's small cities.

Though it's just one of several factors that defines affordability, the average house of a price in Sarnia is just $358,000, according to Zolo. Thunder Bay, the second-most affordable "medium" sized city, has an average home price of $217,745.

Third on the list, Sudbury, boasts an average home price of $268,696, but it also seems like a pretty good option for (cold-tolerant) renters: "Rent for a three-bedroom apartment in Sudbury is $1,700, and a lot of the population is centered around the downtown area, giving it an urban feel without the inflated costs," writes Zolo.

It's the "small" Ontario cities, however, where you're find homes so inexpensive you'll wonder if I made a typo.

In Deep River, about 200 km northwest of Ottawa, the average home sells for just $217,000 while the average income is pegged at $100,343. You'd certainly have lots of extra cash to participate in all of the cross-country skiing and snowmobiling the region is known for. 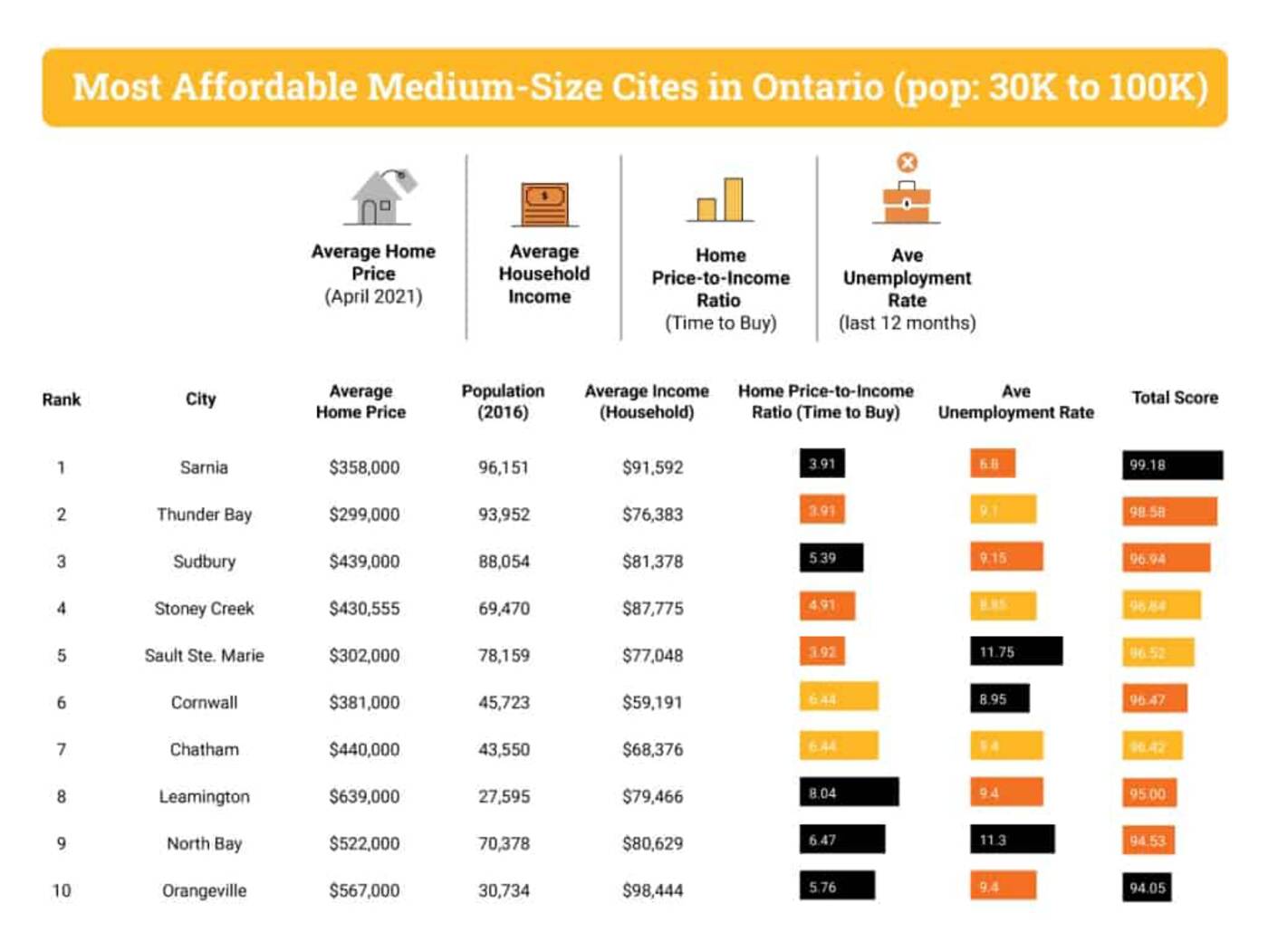 People in these medium-sized Ontario cities pay a lot less for housing despite earning similar incomes to Toronto residents in many cases. Graphic via zolo.ca.

"Each city was given a score of out 100 based on three measurements: affordability (based on comparing the average local income to the average price of local, single-family home); unemployment rate; and population growth," explains Zolo of how it calculated these rankings.

"We examined the most critical element, housing affordability, by examining the average income of each city and then comparing that to the average price for a single-family home."

That figure, known as the home-to-price ratio, was sourced via Statistics Canada data and Zolo's own market trends for March 2021 to help analysts determine how long it would take for an average income earner in any given region to pay off the entire cost of the average priced house.

"For instance, a Home-to-Price ratio of 8.35 means it would take this average income earner just over eight years to completely pay off the average home price (assuming they threw their entire earnings to a debt that cost them nothing to carry)," reads Zolo's latest report.

"While not a realistic expectation, this ratio does help provide a quick analysis of how affordable the housing market is in any given city, based on the earnings of its residents." 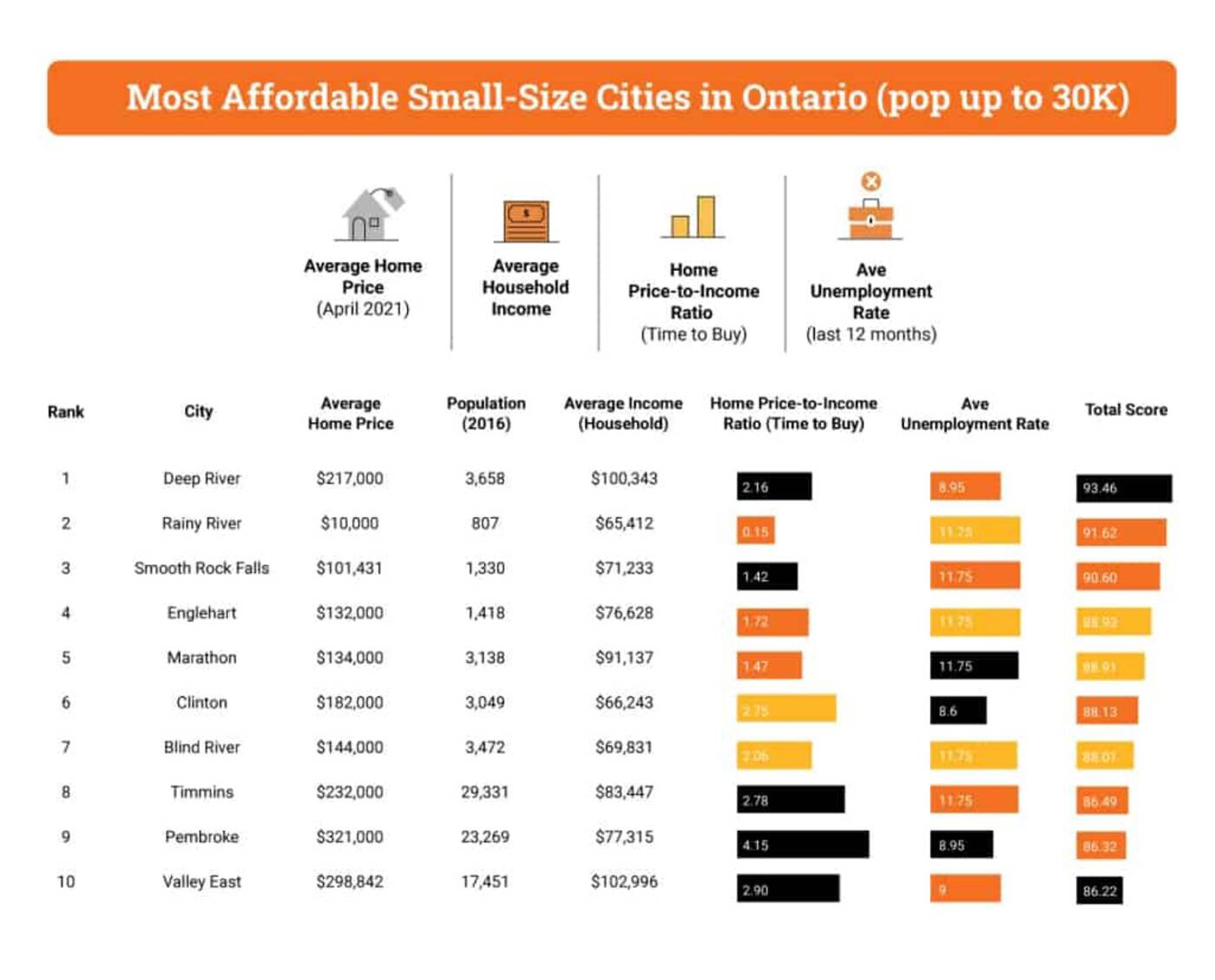 The average Deep River resident makes nearly half of what the average house costs per year. Graphic via zolo.ca.

Here are the full top five rankings for large, medium and small affordable cities, as well as their affordability score as estimated by Zoocasa.

Most affordable large cities in Ontario:

Most affordable medium cities in Ontario:

Most affordable small cities in Ontario: