A new report on housing affordability from Oxford Economics contains great news for the many Canadian millennials who've always dreamed of moving to the U.S. — or rather, to one of the two major U.S. cities we've been groomed since birth to revere.

Los Angeles and New York City are now both more affordable, in terms of housing, than Toronto, Vancouver or even Hamilton, Ontario, according to Oxford's North America Housing Affordability Index, as released on Tuesday. 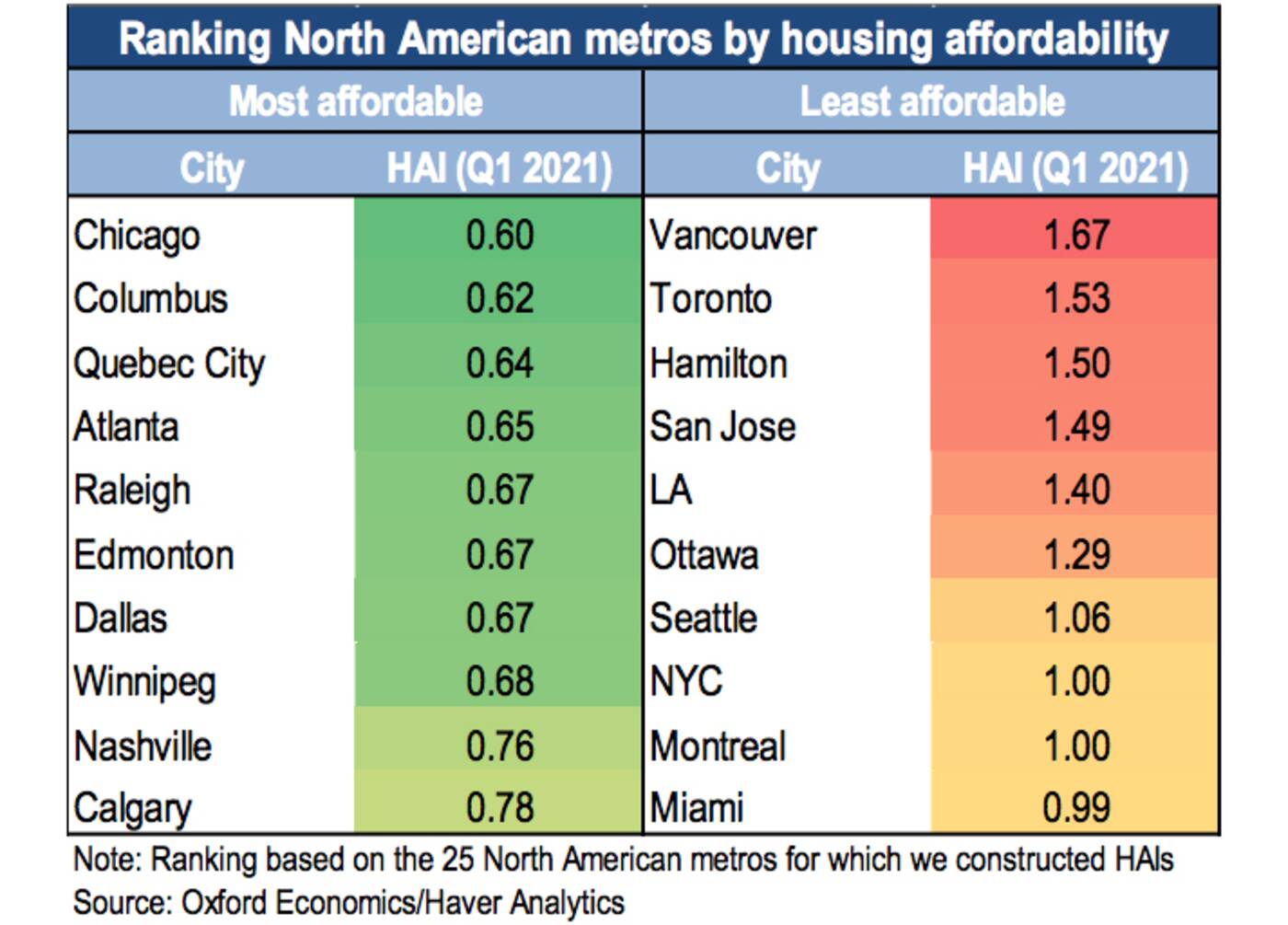 Experts say benchmark home prices have reached historic highs across Canada due to an imbalance between available supply and rising demand. Image via Oxford Research.

Affordability will fall in both Canada and the U.S. over 2021 and 2022, Oxford predicts, but right now the two markets are worlds apart.

The National HAI for the U.S. reached 0.66 in Q1 of 2021, which means that the median single-family home price in America was 34 per cent lower than what a median-income household could afford.

Canada's national HAI, meanwhile, was found to be 1.34 in the first quarter of this year, meaning a home was 34 per cent more expensive than what the median-income household could afford.

None of this factors in regional disparities, of course — homes on the Pacific coast of the U.S. remain unaffordable and out of reach for most people in the country, as do homes north of the border in Vancouver and Toronto. 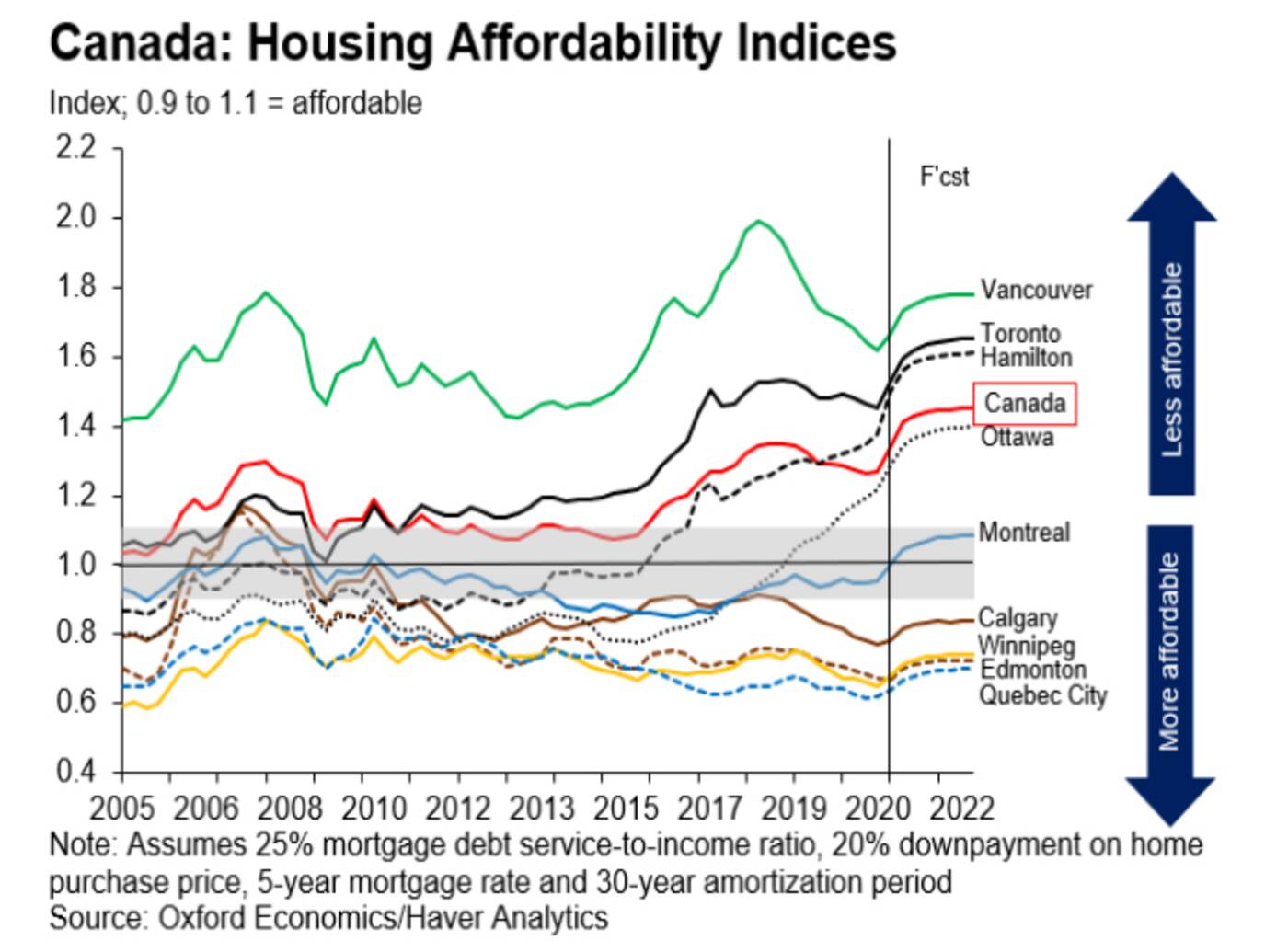 Experts say benchmark home prices have reached historic highs across Canada due to an imbalance between available supply and rising demand. Image via Oxford Research.

"Unaffordability is a persistent issue in Toronto and Vancouver, and the recent price surge has served to exacerbate this more than a decade-old trend," reads the report, which you can read in full right here.

"Hamilton and Ottawa have joined the ranks of Canada's least affordable metros, while homes in the Prairies and Quebec remain within reach of local households."

While Oxford predicts that affordable housing will become increasingly hard to find in both countries, the economics firm stats that "housing is, and will remain, much more affordable in the U.S. than in Canada."

As we all well know by this point, metro areas are the least attainable for people seeking any type of home to purchase (condo, detached or otherwise) — but smaller communities aren't immune to skyrocketing home prices. 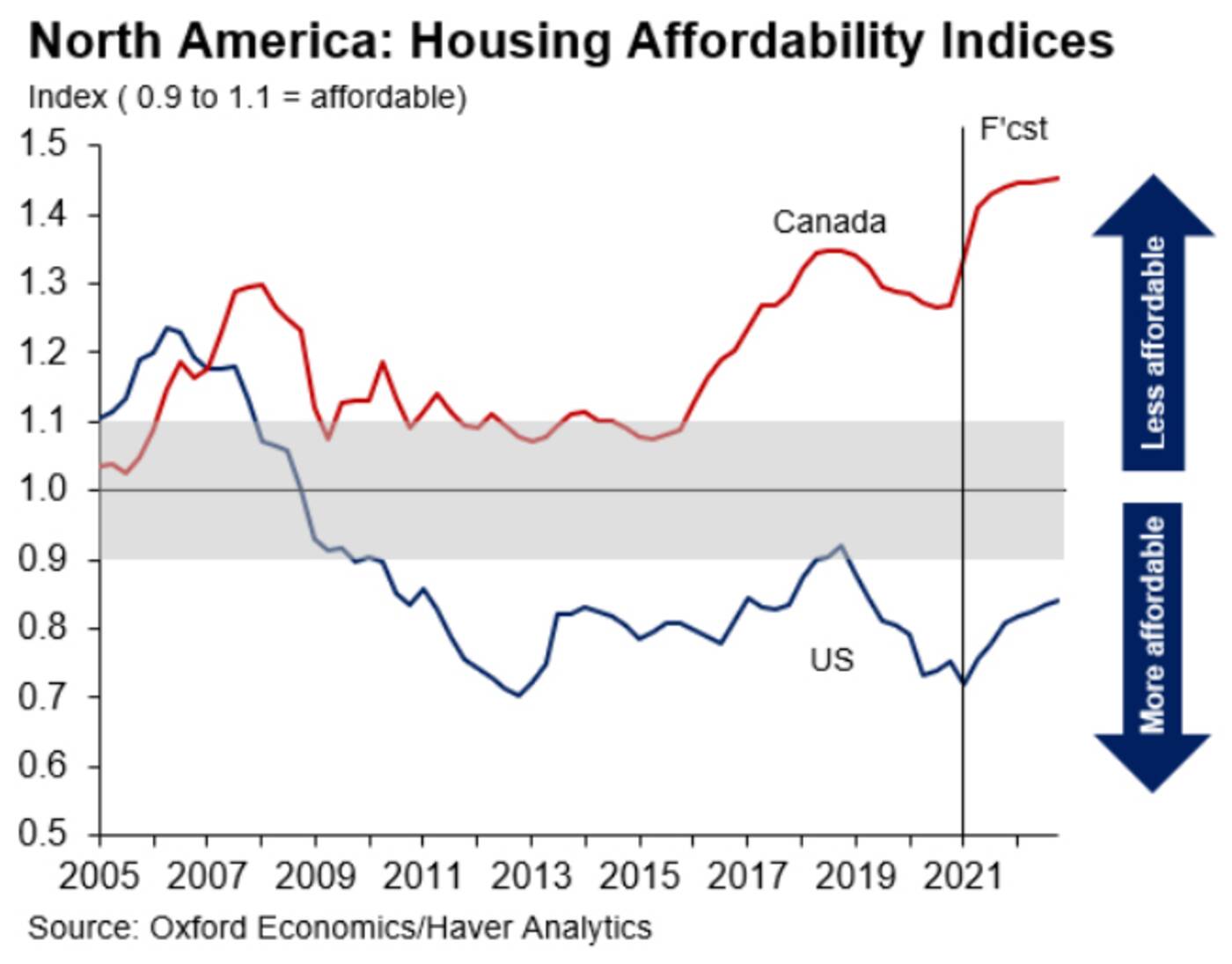 Affordability is worsening in both Canada and the U.S., but home prices north of the border are still significantly higher and expected to remain that way for some time. Image via Oxford.

"Canadian housing affordability has worsened considerably over the past decade, not only in Toronto and Vancouver, but also in several smaller metros," reads the report.

"In Ontario's major metros, affordability has worsened considerably over the past decade. Toronto's index reached an all-time high of 1.53 in Q1 2021, while Hamilton, a smaller nearby metro, saw its index jump to 1.5 in Q1 2021, putting it among Canada's most unaffordable metros."

There are still some great cities in the province where homes are still moderately affordable, but if trends continue the way they're going, it might not stay that way for long.