Buying a house in Toronto remains all but a pipe dream for most people who don't already own a place in Canada's largest city, as scores of studies have pointed out over the past couple years.

While there are many things driving the unaffordability crisis, one factor cited most often by experts is slow income growth — or rather, an uneven rate of growth between average wages and average housing prices.

A recent report from the Canadian real estate trend analysis firm Point2 illustrates how bad this discrepancy has grown in Toronto over the past ten years for home owners (as opposed to renters, who have serious issues of their own) in plain and undeniable form.

Using data from Statistics Canada, the Canada Mortgage and Housing Corporation (CMHC), The Canadian Real Estate Association (CREA) and RBC analysts ranked the 50 most populous cities in Canada based on how much an average home owner's income is spent on mortgage costs, and how much that changed between 2010 and 2020.

"The disparity between galloping home prices and slower-moving incomes means that the number of unaffordable cities (where homeowners spend more than 30 per cent of their income to cover the mortgage alone) is going up at an alarming rate," reads the Point2 report.

"Although not all of them became unaffordable, a total of 38 cities experienced deteriorating mortgage affordability due to the widening gap between the growth of home prices and incomes."

Surprisingly, Toronto ranked 17th out of 50 for "the most cost-burdened cities in 2020," based on the CMHC's standards of affordability, with data showing that homeowners spent about 28 per cent of their median incomes on mortgage payments in 2020.

This is compared to an average of just 18 per cent of one's income in 2010, however, thanks largely to skyrocketing real estate prices. 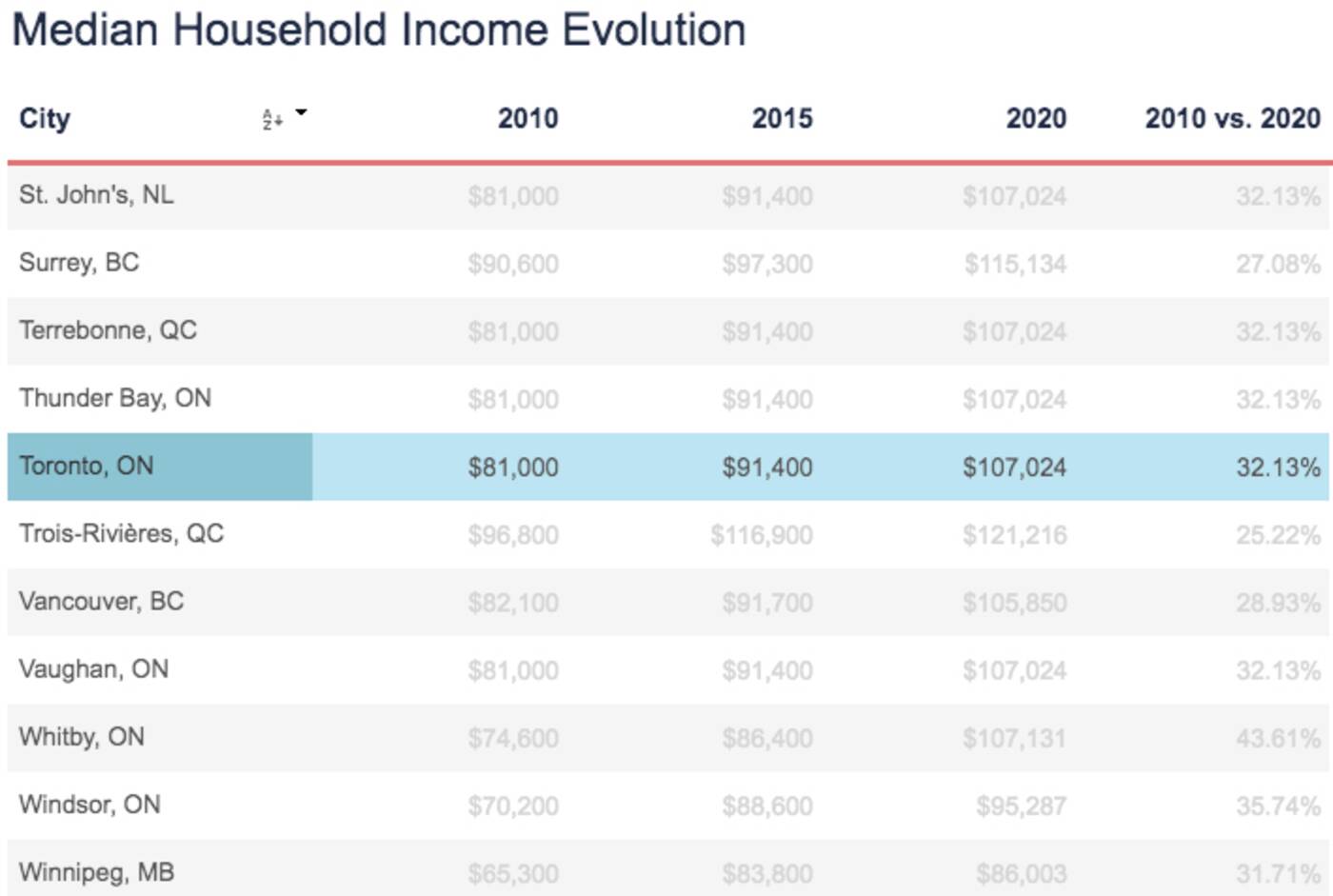 Median household incomes have risen just over 32 per cent in Toronto over the past ten years, but home prices have more than doubled. Image via Point2.

Wages, meanwhile, grew by just 32.1 per cent during the same time period. The median income in the City of Toronto was around $107,024 in 2020 according to the study, contrasted against $81,000 a decade earlier.

"Home prices are increasing much faster than wages, causing affordability to erode despite mortgage rates remaining at record lows," wrote Point2 in its report.

"Incomes not only didn't keep the pace, but in some cities, wage growth is far behind home price growth."

Aside from Edmonton, Alberta, which boasted an increase of roughly 53 per cent per household income on average, Canada's 50 most-populous cities saw "modest wage growth" ranging between 11 per cent and 49 per cent in the 2010s.

Housing prices went up, meanwhile, throughout the entire GTA, with Oakville homeowners posting the second-highest share of income spent on housing in 2020 at 44 per cent.

Negative as these trends might seem, there are still some markets in Ontario where homeowners spend less than 15 per cent of their incomes on housing, rendering them "affordable" by CMHC's standards.