The exodus of people from Toronto and its increasingly costly housing market continue to have impacts on surrounding suburbs, with property prices and sales volumes in Oshawa, Hamilton, Burlington, and other nearby locales spiking to record highs in recent months.

As the work-from-home trend and lockdown closures continue, residents have less incentive to live in the most expensive city in Canada and are looking elsewhere — including farther outside the bounds of the GTA.

Simcoe County saw a huge increase in demand for housing last year, as did Durham Region municipalities like Brock and Scugog as more and more people determined that their first home purchase would have to be outside of Toronto, where it takes even those with a salary close to $200k a whopping 25 years to save up for one.

As Toronto prices are projected to only continue to skyrocket, rural areas are looking more appealing, including cottage country.

A new report on recreational properties from RE/MAX indicates that though there are still a lot of bargains to be had in cottage markets, prices are slated to rise in tune with rising interest in these areas as opposed to the big city. 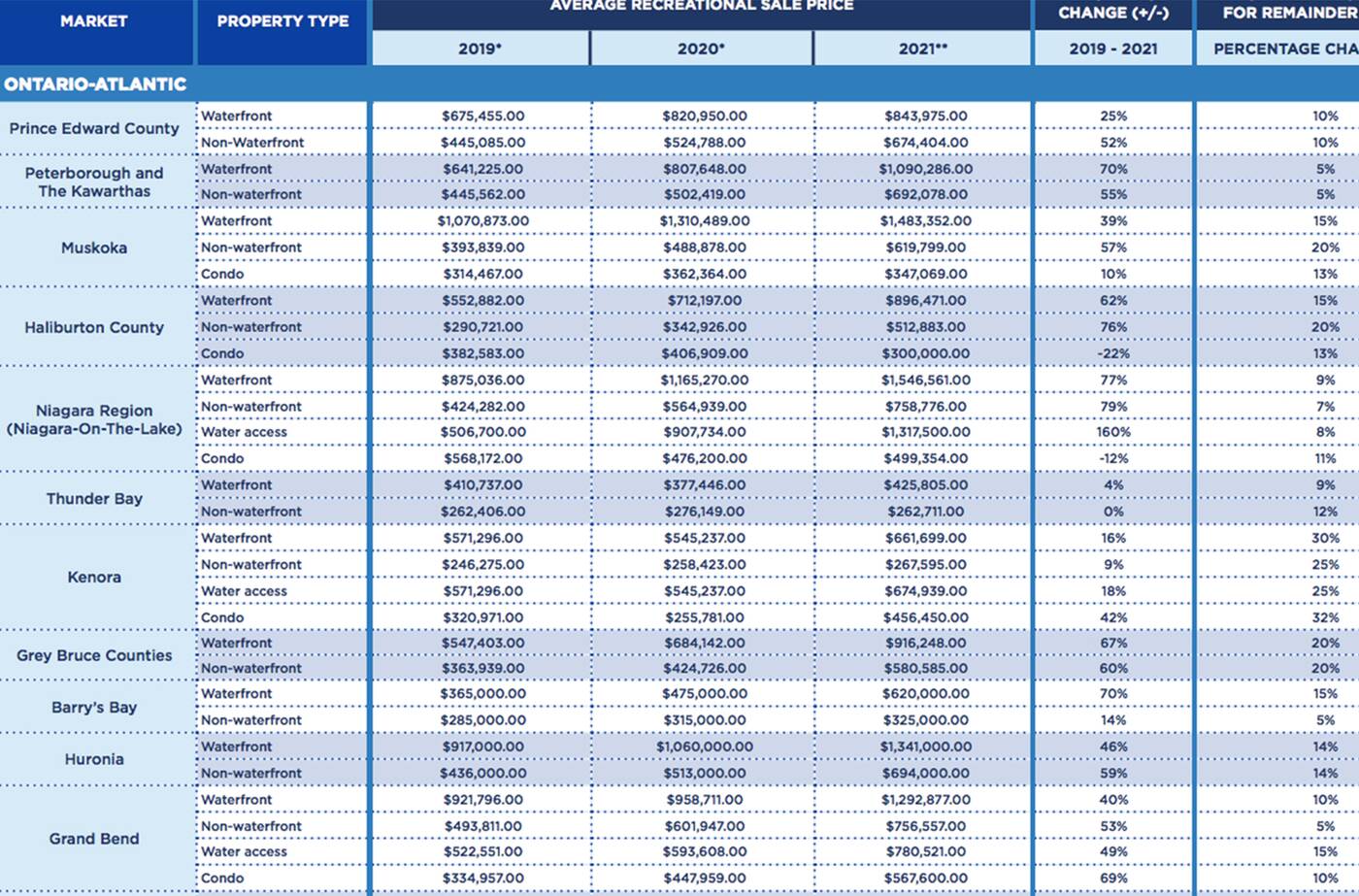 Chart of past and expected price trends for various parts of cottage country from RE/MAX.

The data, released Tuesday, show an anticipated average sale price growth of as much as 30 per cent for certain property types in some regions by the end of the year, including in Kenora (specifically waterfront properties and condos) and Parry Sound (condos in particular).

A slew of regions will see similar price hikes of 20 to 25 per cent: both waterfront and non-waterfront properties in Port Colborne, south of Niagara, as well as in Grey Bruce Counties, near Blue Mountain.

Also, two of the most popular regions for cottages — Muskoka and Haliburton — are likewise expected to see prices rise by an average of 20 per cent through 2021, and for non-waterfront properties, interestingly enough.

Some areas have also seen astounding price jumps in the past two or so years, such as Peterborough and the Kawarthas, where the average property price has gone up 70 per cent since 2019, or Haliburton County, where it's climbed 76 per cent.

Prices soared even moreso in Niagara Region, where waterfront and non-waterfront properties went up 77 and 79 per cent in that timeframe, respectively, and properties with water access jumped a shocking 160 per cent. 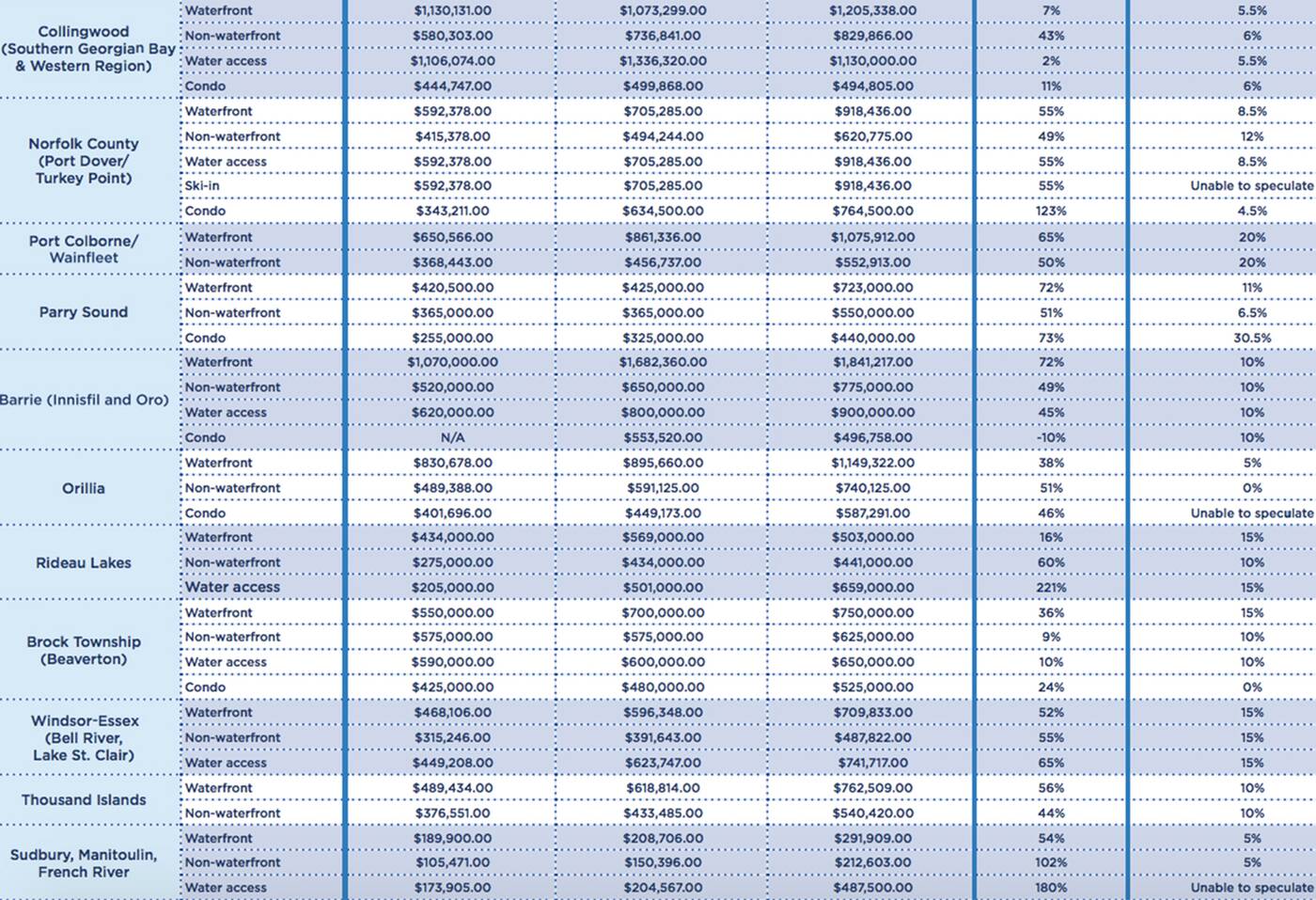 Chart of past and expected price trends for various parts of cottage country from RE/MAX.

Other places that are clearly drumming up a lot of interest among those looking to leave the GTA: Sudbury/Manitoulin/French River, where some housing types have increased by 180 per cent from 2019-2021; Norfolk County, where condo prices rose 123 per cent during that time period; and Rideau Lakes, where houses with water access shot up 221 per cent.

Though by nature of their location, these housing types are being deemed vacation properties, the fact that prices for condos and non-waterfront homes are heating up so quickly indicate that interest may indeed be from people looking to move permanently, not just those in the market for a cabin.

Other experts are likewise expecting cottage prices across the province to increase by around 20 per cent overall, which may leave few eligible markets in the province within the ideal budget of most people.