A prime intersection in the heart of Toronto could look a whole lot different if a local developer gets his way, though the city councillor representing the area is not at all pleased with the sky-scraping plan's ambitions.

But first, a bit of background.

Developer Sam Mizrahi is currently embroiled in a skyscraper race not seen since Depression-era Manhattan, battling with Pinnacle Developments to own the crown that comes with erecting Canada's tallest building.

Mizrahi's The One at Yonge and Bloor (where Toronto's worst-kept secret Apple store is being built) and the SkyTower at Pinnacle One Yonge at Yonge and Queens Quay are both well under construction.

Both will stand taller than any building that currently exists in the country (the CN Tower is not a building, look it up), but Pinnacle has a slight edge in height over Mizrahi.

Not willing to lose the race without a fight, Mizrahi applied for a height increase at the end of 2020, asking the city to approve an additional nine storeys that would bring the tower to a staggering 94-storey height.

As part of the application's review process, a virtual community consultation was held on Wednesday evening, allowing the public and the local councillor to watch a presentation from the developer and share their comments.

Even before the presentation began, Ward 11, University-Rosedale Councillor Mike Layton came out swinging, indicating that the meeting was a formality in his eyes and that the approved height was as tall as the tower needs to be.

"The developer has the full right to put in another application, and we statutorily have to have a meeting like this," said Layton. "Just because they can make an application doesn't mean they'll get it approved."

The developer's presentation justifying the height increase — a matter that will take time for city staff to analyze — included plans to redesign the Yonge and Bloor intersection completely. 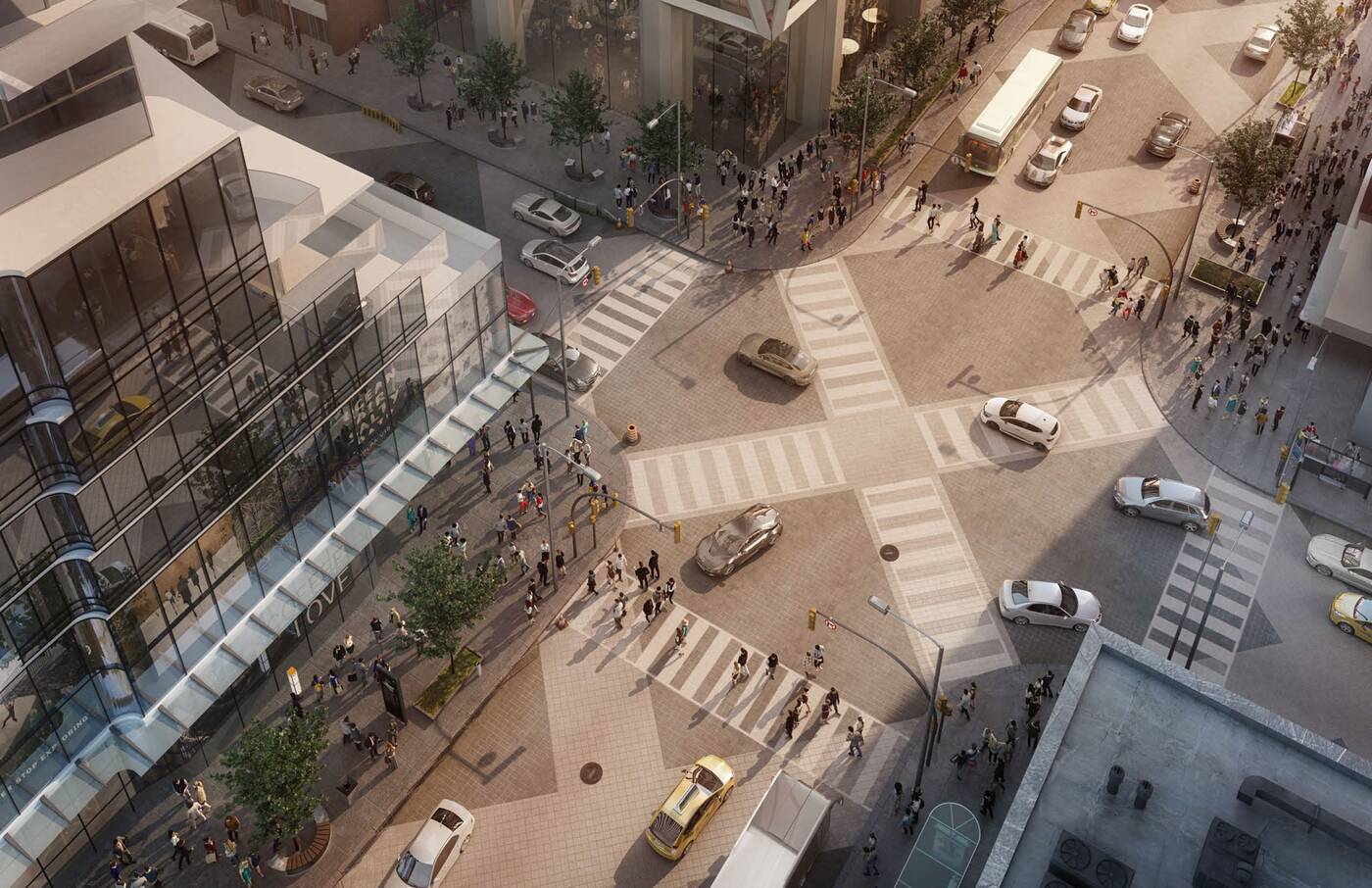 Aerial view looking southwest over a redesigned Yonge and Bloor intersection. Rendering by Mizrahi Developments via City of Toronto.

The redesign would allow Yonge and Bloor to continue functioning as a major intersection while also supporting enhanced programming like street festivals and the annual Pride parade.

Geometric hash mark patterns would merge the designs of the intersection's scramble crossing designs and the structural exoskeleton of the mammoth tower under construction at the southwest corner.

Renderings envision different iterations of what could be new pop-up holiday markets, with stalls, activities, and seasonal displays spilling outward from all four ends of the intersection. 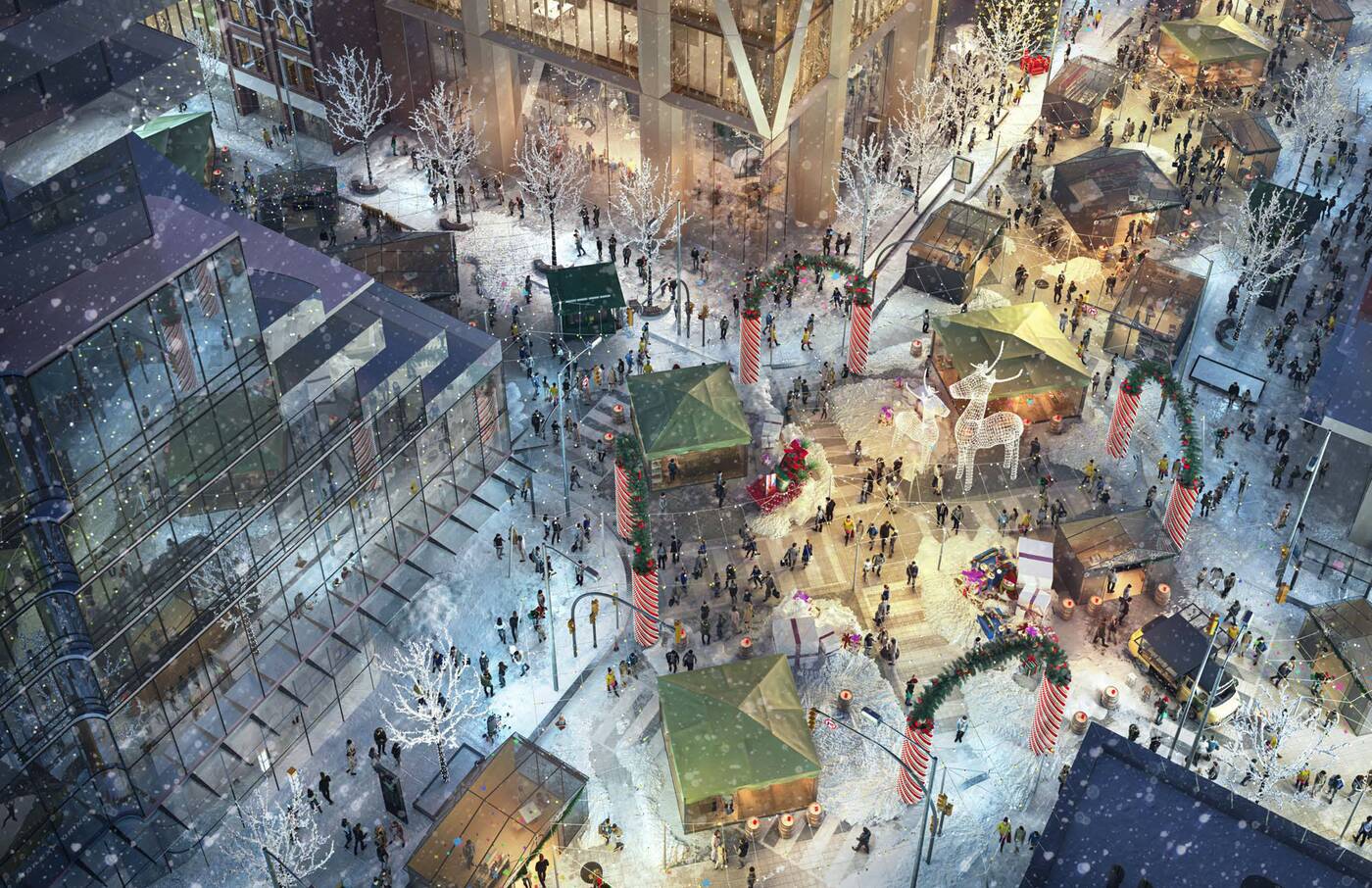 Aerial view looking southwest over a redesigned Yonge and Bloor intersection in holiday market configuration. Rendering by Mizrahi Developments via City of Toronto.

Despite the pretty renderings promising a more inviting streetscape, Councillor Layton was unimpressed with the gesture, saying that plans are already funded for a future makeover for the intersection. 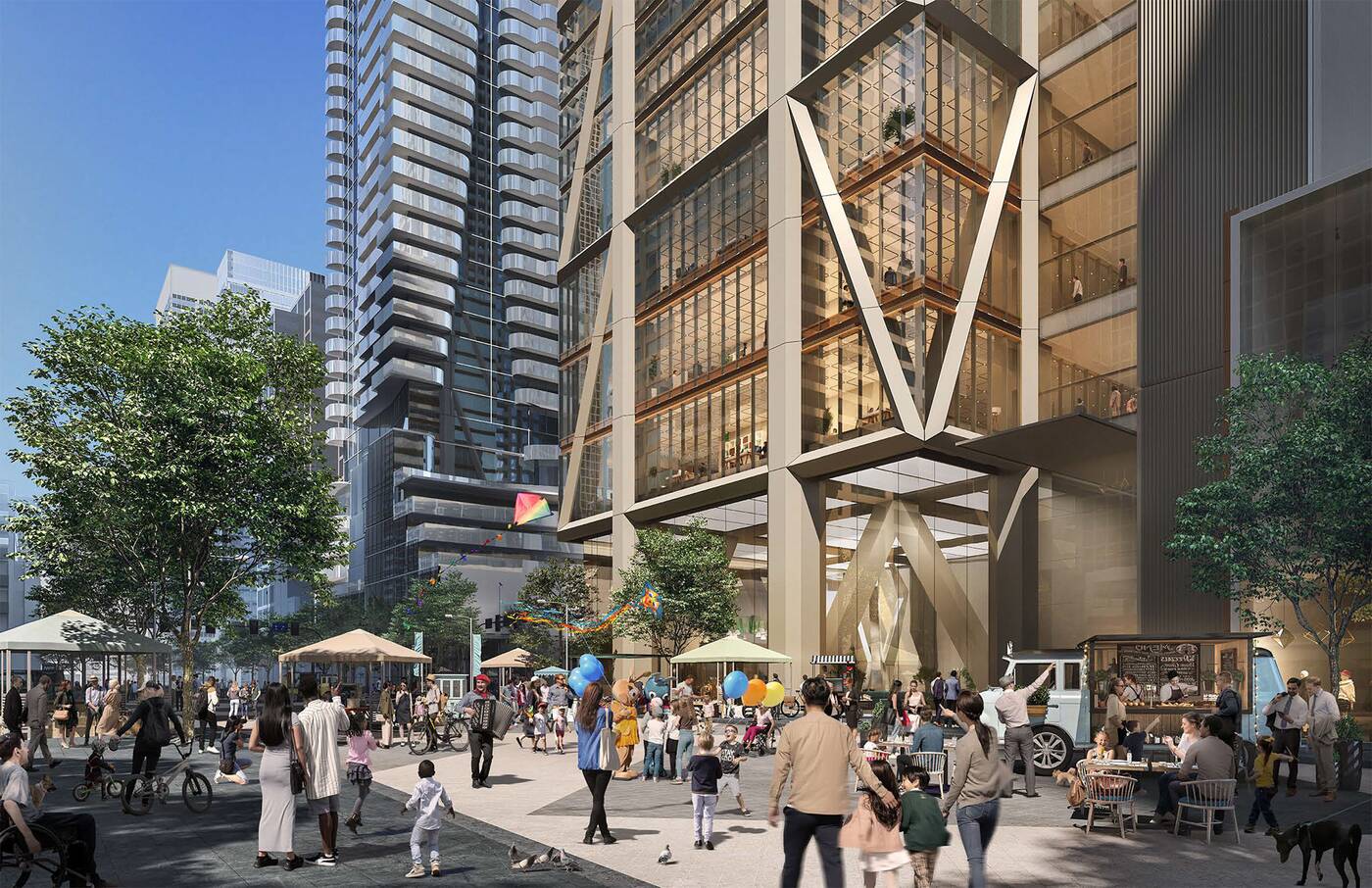 Looking southeast across a redesigned Yonge and Bloor intersection being used as a pop-up street market. Rendering by Mizrahi Developments via City of Toronto.

"What nobody has talked about is that the Yonge and Bloor intersection will be torn up over the course of the next eight years, entirely, for the purpose of expanding the subway platforms below," said Layton.

" If we don't expand those platforms, people will die, is simply what we've been told."

"We're not going to spend over a billion dollars on rebuilding the intersection without putting something really spectacular on top, something that fits the corner of Yonge and Bloor. We don't require developers' help putting a tiny bit of frosting on a billion-dollar cake that we're baking underground."

Aside from the presentation's cold reception, the race to build Canada's tallest is still very much up for grabs.

Outstanding issues like added height and its shadowing impacts on Jesse Ketchum Park would need to be resolved for the application to have any shot of being granted approval.

Either way, what is being built at Yonge and Bloor is still taller than any building that exists in Canada today.

Even without the added height being proposed, The One has a good shot of at least temporarily winning the crown of Canada's tallest before the taller SkyTower eventually overtakes it.

Mizrahi Developments via City of Toronto